This is the last part of ‘’Finding the best players in Belgian Pro League’’ series that was based on data and statistics. The final data analysis will show us the best forwards in the league this season. Our dataset consists of players who mainly played as forwards and played at least 600 minutes in the league. It’s too bad that the season finished prematurely due to COVID-19, because Terem Moffi couldn’t collect 600 minutes to be included in the analysis, but the 20-year-old Nigerian is one to watch next season.

Last summer Belgian Pro League lost a pair of great forwards in Wesley and Victor Osimhen. Osimhen moved to play in the Ligue 1 side LOSC Lille, while Wesley got into newly-promoted Aston Villa in the Premier League. Wesley also suffered a season-ending knee injury which cleared the path for transfer of Mbwana Samatta from Genk to Aston Villa. The English Premier League is clearly the number one buyer for Belgian Pro League best players. At the end of this data analysis, we will highlight the best three forwards who could be next in line for a potential move. 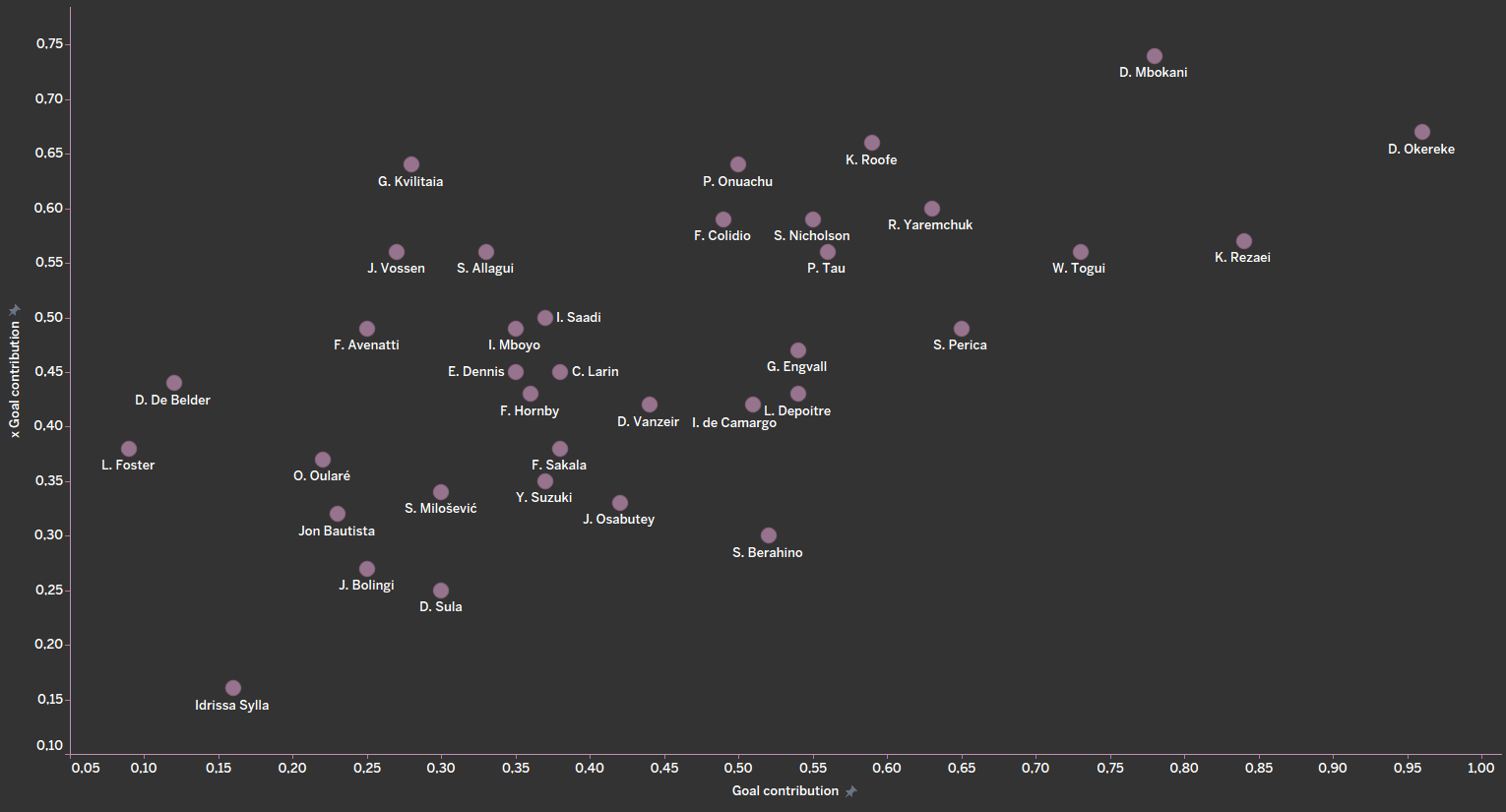 Okereke, Rezaei and Mbokani are showing great numbers in both metrics and over-perform their expected contribution.

Dieumerci Mbokani, the 34-year-old veteran striker, is having the best season of his career with 18 goals for Antwerp. He contributes with 0.78 goals per 90, exceeding his expected contribution value of 0.74 per 90.

This section will provide insight into the involvement of players close to the opponents’ goal. The graph below compares players according to their touches in the box and shots. 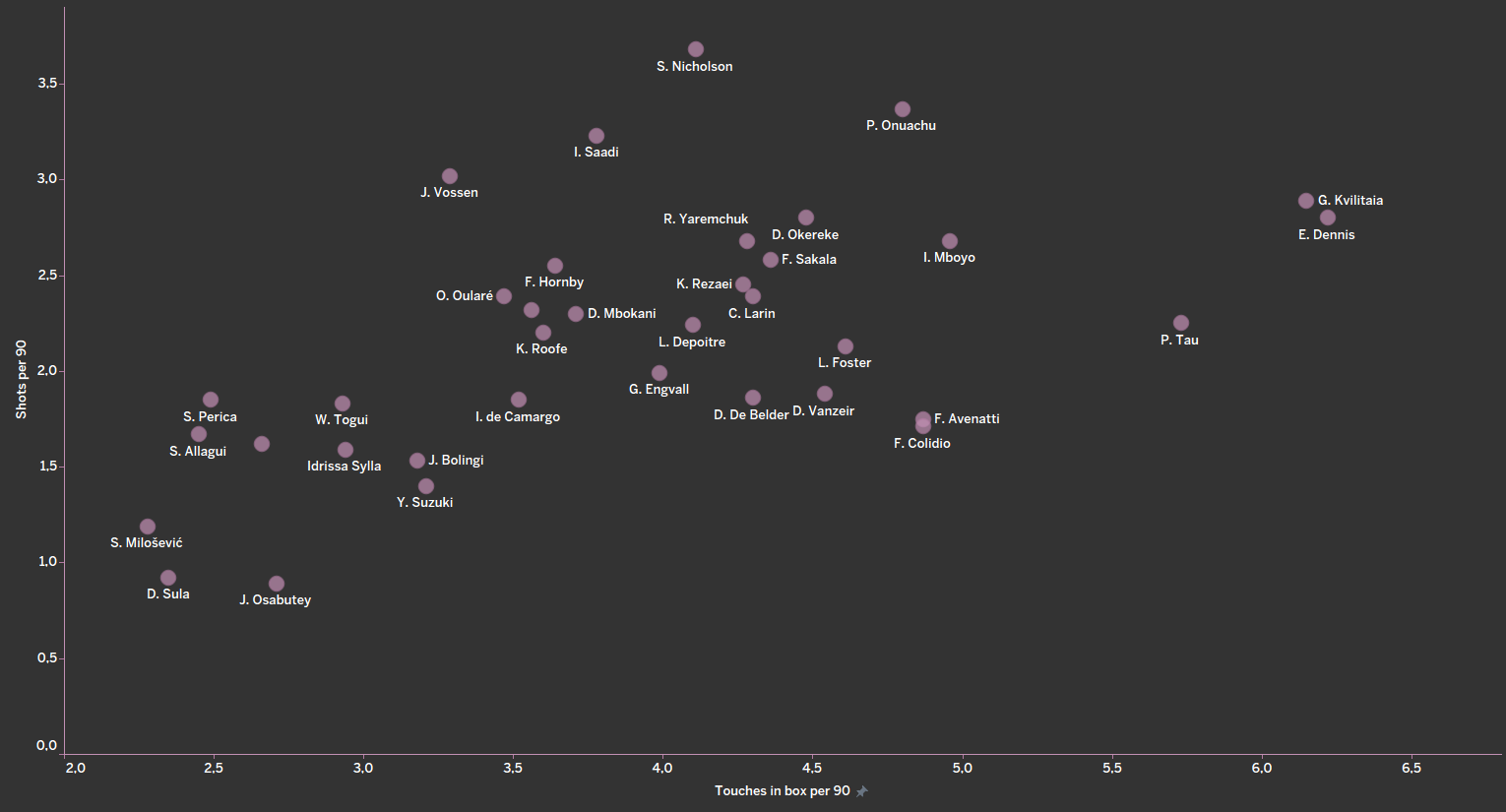 Next, we’ll list some of the players who stand out.

Giorgi Kvilitaia is a 26-year-old forward who plays for Gent. He is averaging 6.15 touches in the box per 90 and 2.89 shots per 90. The Georgian international is really getting into good situations because he has 0.47 xG per 90, but this season he largely underperformed, scoring just one goal in 23 appearances.

Emmanuel Dennis is a crucial player for Club Brugge. The Nigerian forward can play on both wings and the central position in attack. Dennis is averaging impressive 6.22 touches in the box per 90 and 2.8 shots per 90. The Nigerian put himself on the football map by scoring twice at Santiago Bernabéu against Real Madrid in the Champions League.

Percy Tau is a South African forward who is loaned from Brighton to Club Brugge. Tau is a big part of Club Brugge’s rotation. He is averaging 5.73 touches in the box per 90 and 2.25 shots per 90.

Paul Onuachu is a 25-year-old target man who plays for Genk. Onuachu is having a solid debut season in Belgium but has the potential to offer more in the future. The Nigerian is averaging 4.8 touches in the box per 90 and 3.37 shots per 90, meaning he is not hesitant to shoot when close to goal.

Shamar Nicholson, like Onuachu, plays his first season in the Belgian Pro League. The Jamaican international is playing for Charleroi. Nicholson is averaging 4.11 touches in the box per 90 and 3.68 shots per 90. He shoots the most compared to others in this analysis, which helped him reach eight league goals this season.

This section will help us see which players participate in creating chances. The graph below compares players based on their deep completions and passes to the penalty area. 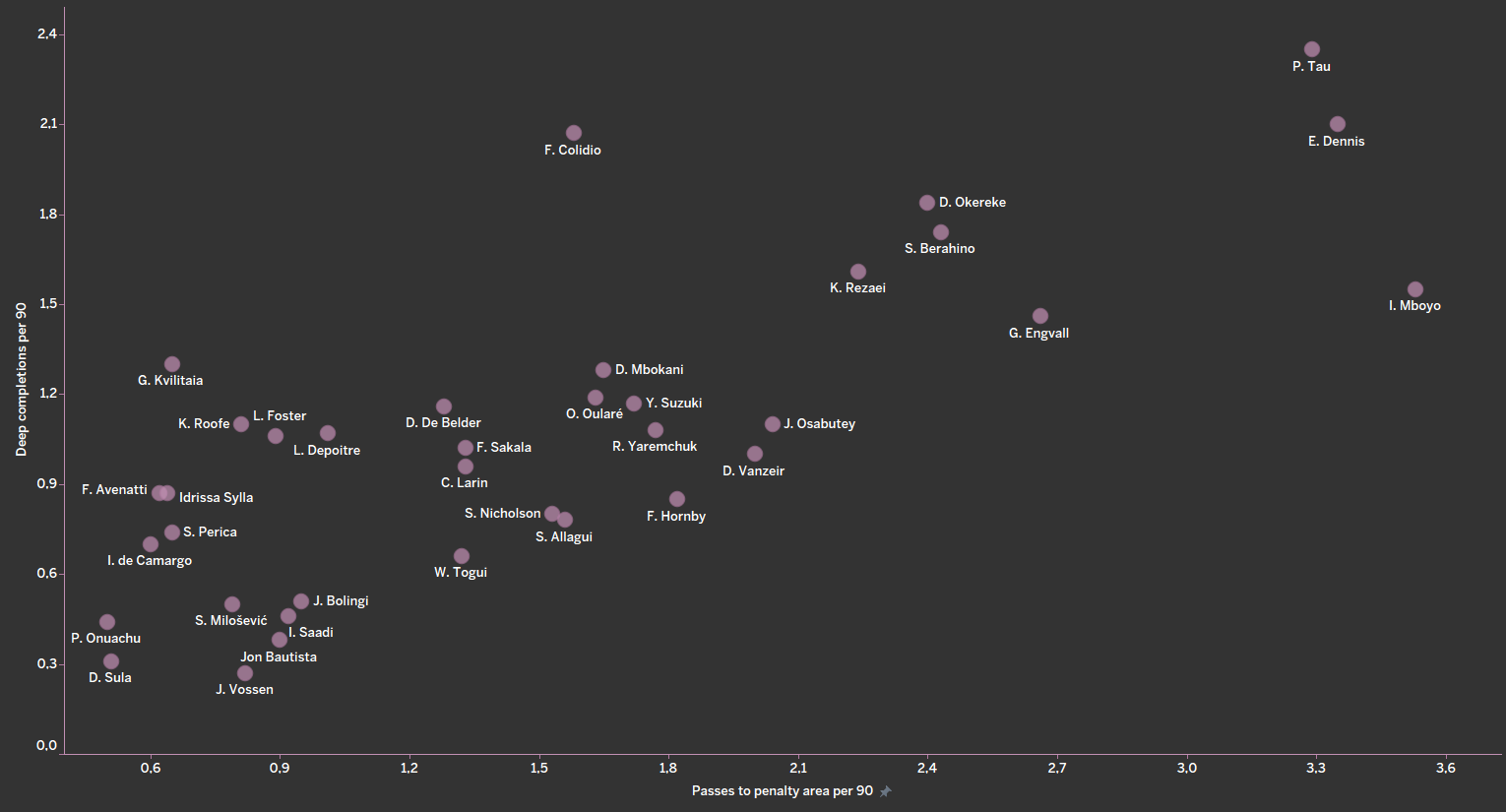 It is clear that some players stand out from the bunch. Mboyo, Berahino, Engvall and Colidio are a vital part for their teams in creation. We will evaluate only those who were highlighted in sections above because they can get in the final shortlist.

We can see a fantastic impact from Club Brugge forwards Tau, Dennis and Okereke. Rezaei is under contract with Club Brugge as well.

This is the last metric used in our analysis and we will show the dribbling attempts and successful attacking actions from players we mentioned above. A bigger dot means better dribbling success rate. 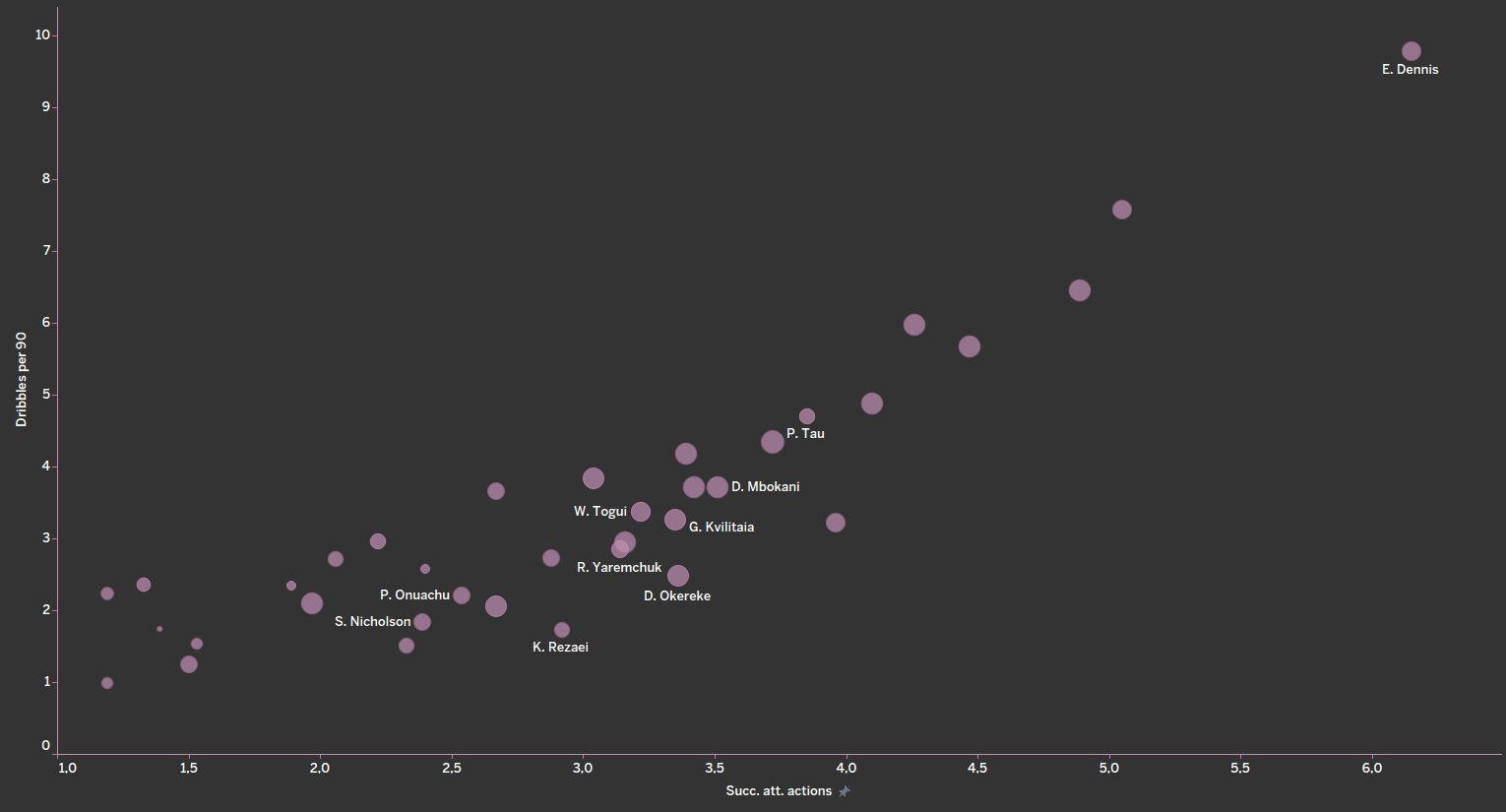 The player that clearly stands out is Dennis. Not only has he 6.15 successful attacking actions per 90, but he attempts the most dribbles compared to the others, albeit with a success rate of 45% which should be improved. Dennis spent a part of his playing time on the flanks which gave him a chance to dribble more (9.47 dribbles per 90). Others average between 1.5 and five dribbles per 90 while averaging between two and four successful actions per 90.

In this section, we will further describe players we highlighted. Some of their strengths and weaknesses will be described to get a better insight into their abilities and decide whether they could end up on the final shortlist.

Mbokani this season is showing why he was in many European top clubs. His goal-scoring ability is remarkable, as he gets in a lot of good situations and scores often. He doesn’t contribute in other parts of the game and because of his age and playing style, we can’t expect that to change.

Okereke is one of many players Club Brugge use in their rotation and it is really a shame that he didn’t play more because his contribution is exceptional. Except in dribbling, he contributes in all areas for his team while averaging 0.96 goal contribution per 90 minutes.

Rezaei couldn’t get minutes in Club Brugge at the start of the season, so a loan to Charleroi enabled him to show his quality. Rezaei scored 12 goals in the league. He helps his team in creation as well, often playing passes around the penalty area.

Kvilitaia is having a season to forget if we look at his output. It’s really disappointing to see a forward who averages 0.47 xG per 90 to score 0.09 goals per 90. We can’t ignore his qualities because of his output since Kvilitaia has a lot of touches in the box and shoots often, so he could bounce back next season. After two fractures on his foot, he couldn’t find his form which earned him a transfer to Gent.

Dennis is contributing a lot in creating chances and dangerous situations. He shoots a lot and has most touches in the penalty box. Dennis attempts the most dribbles as well, but needs to make better decisions when to dribble. Working on his shooting and composure in front of goal could make him a remarkable forward.

Tau is not a usual centre-forward as he likes to roam and can adapt to different roles. In 20 appearances he scored three goals and assisted four times. He has a lot of deep completions and his xA per 90 is 0.21, which is quite creative for a forward.

Onuachu is a huge presence in the penalty box. His height and strength give him an advantage against defenders. His weakness is that he depends a lot on the team creating for him.

Nicholson adapted a lot at Charleroi since his debut match where he scored the first goal. The Jamaican forward can play as a second striker as well. Nicholson uses every situation to shoot without hesitating which is an indicator of a goal-hungry forward.

Yaremchuk had a really effective season for Gent, but surgery of the Achilles tendon prevented him from playing the second half of the season. The Ukrainian scored 10 goals in 18 appearances in the league. He is average in other sections we evaluated but his goal-scoring ability is praiseworthy.

A lot of quality players were mentioned; some of them have room to improve and some of them are final products. Mbokani’s experience gave him the advantage to score the most goals among those compared, but aged 34, we can’t expect from him to get a transfer to the team in a better league. The final list includes players who could make a step forward by moving to a better club in the near future. Tau will get back to Brighton where he could compete for a position in the matchday squad. Rezaei could fight for his position at Club Brugge as well because many of their forwards will be transfer targets in the upcoming transfer window, like two players in the final shortlist.

Emmanuel Dennis is a player who contributes a lot to his team. He can be used in different roles in attack. Dennis’ pace and direct style of play make him attractive for teams that play fast-paced football. He is already linked with a number of Premier League teams. Transfermarkt values the 22-year-old at 13.5 million euros. We can see that Dennis takes a lot of low valued shots, and if he improves his finishing and composure in front of goal he could be deadly. 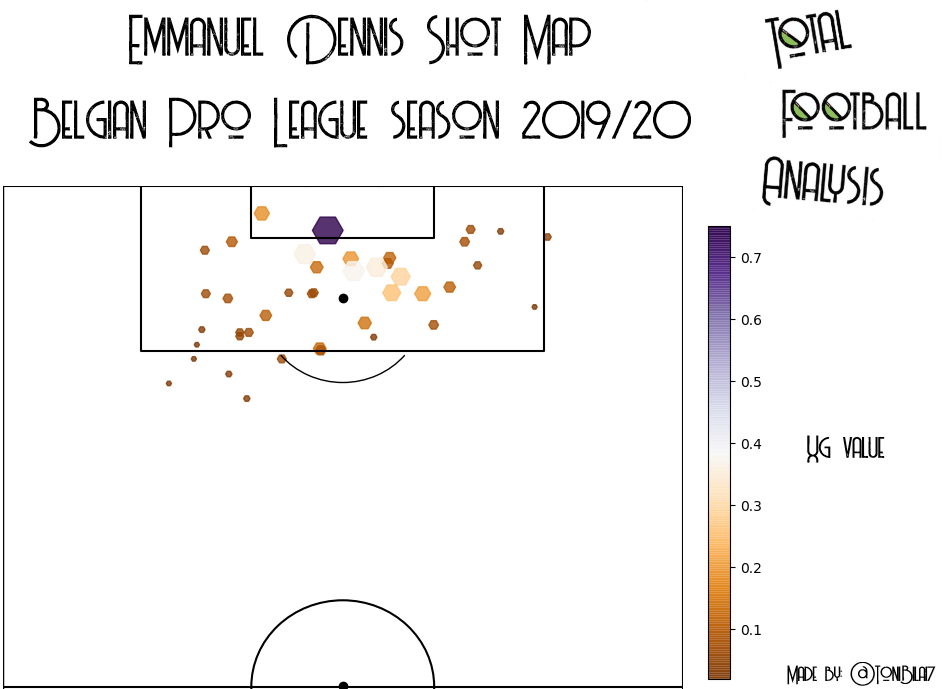 David Okereke, unlike Dennis, shows his quality finishing. He would probably have more goals than nine if he played more. Club Brugge possess an incredible attacking roster where the slightest drop in performance gets you on the bench, which at some point happened to Okereke. It will be really interesting to see if a big club reaches for him after just one season in the Belgian Pro League. Transfermarkt values him at 5.5 million euros. Okereke takes a lot of shots from central positions where is the best angle to see the whole goal which is the reason why his efficiency is high. 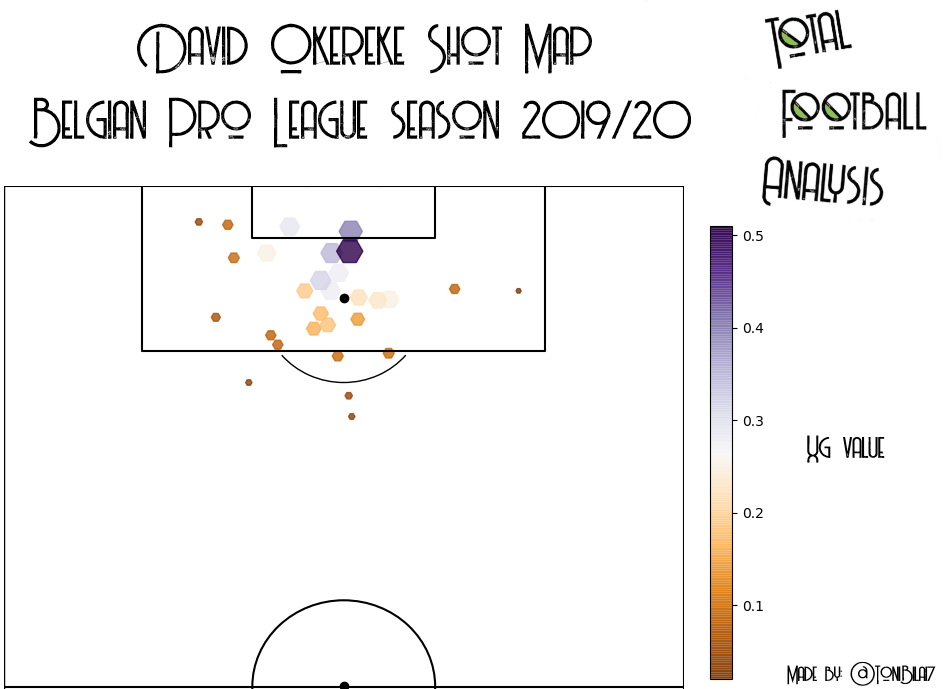 Shamar Nicholson got into the final shortlist because he is a modern forward who can be a threat from different situations. He is cagey in the penalty area, shooting often when finding the chance and uses both feet to shoot. He’s a tall forward who exploits gaps behind opponents’ defensive line by making smart runs. What is really impressive is his accelerated development in two and a half years, making it from Jamaica to Belgium. Now in his first season, he has already caught the eye of many scouts. Transfermarkt values him at only 1.6 million euros which won’t be an obstacle for those who want him. Nicholson takes most shoots per 90 in the league. We can see that he shoots from anywhere, but he takes a huge amount of shots from central positions in the penalty area which is crucial. Nicholson already gets in best positions to shoot and with more match experience on higher-level, he could become a fantastic player. 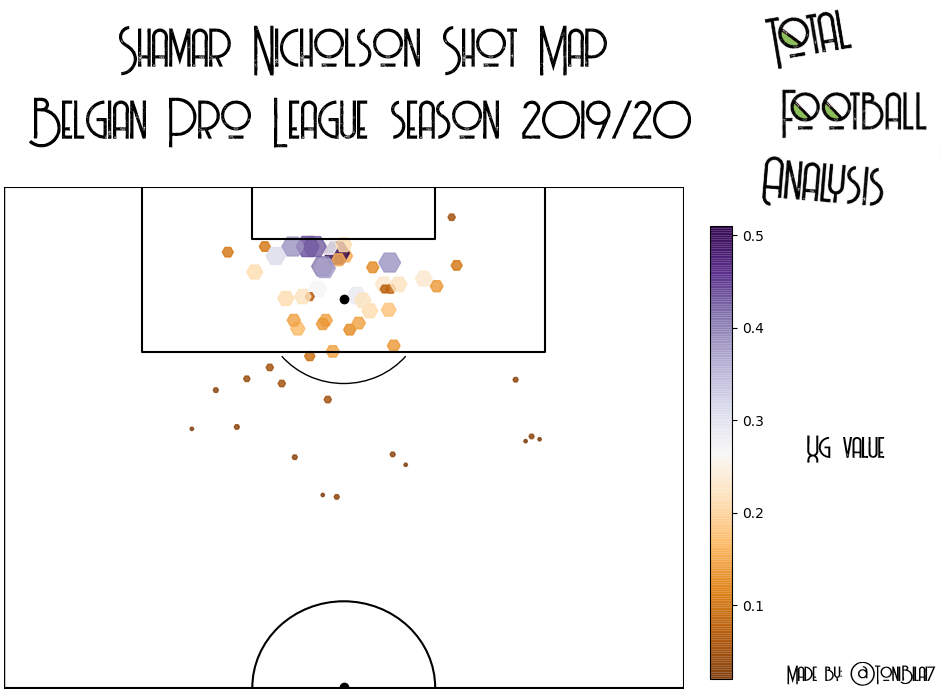 Not only have we decided which players are gonna be in demand when the transfer window opens, but we actually can confirm that the Belgian Pro League teams are doing some fantastic scouting work. A few players mentioned are playing their first seasons in Belgium and are already making an impact. If Yaremchuk regains his form, he will probably make a transfer as soon as possible, but the injury also gave a slight advantage to Nicholson. Club Brugge duo Dennis and Okereke probably won’t play together next season; we can assume that one of them will move to one of the top leagues, probably Dennis.