Leganés welcomed Real Madrid to Estadio Municipal de Butarque on matchday 38 of the La Liga season knowing that only a win would do in order for them to seal survival and secure top flight status for a fifth season in a row. They faced their relegation battle but had a difficult task as they must beat the side who had already been crowned champions after beating Barcelona to the title.

Sergio Ramos got the visitors off to an ideal start with a powerful header, but loanee Bryan Gil’s run and smart finish on the stroke of half-time gave the hosts hope. Marco Asensio reacted early on in the second half after impressive work by Isco in the build-up, but substitute Roger Assalé came on to equalise again for Leganés. Bombardment followed, including a shout for handball by Luka Jović in his own box, but Leganés could not find a winner.

This tactical analysis will provide analysis of the tactics of coaches Javier Aguirre and Zinedine Zidane as we analyse what happened in this 2-2 draw in La Liga. 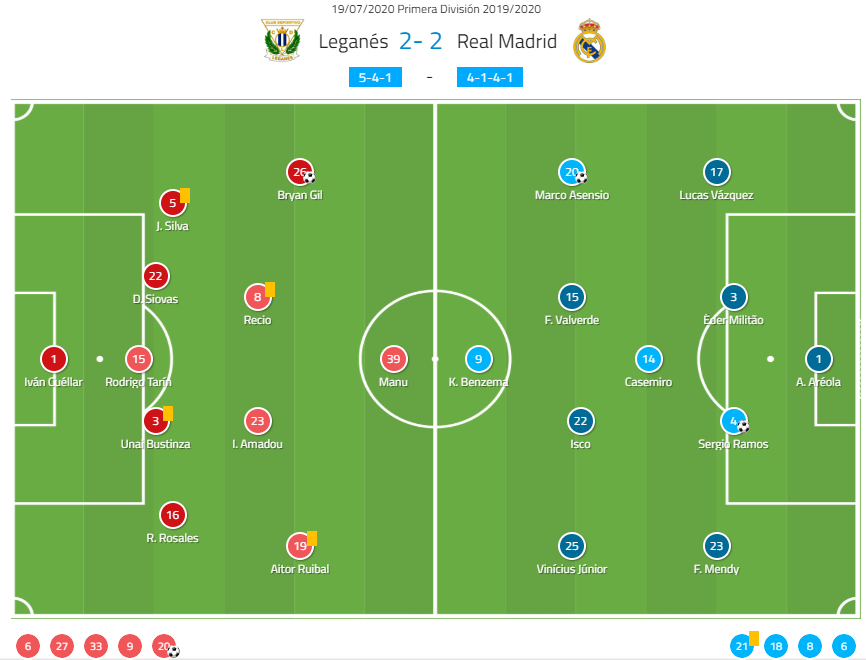 Leganés surprisingly opted to leave midweek goalscorers Miguel Ángel Guerrero and Roger Assalé on the bench, with Manu Garrido starting again in attack as they stuck to the back five defence which has worked well for them of late. The biggest shock came in the form of Óscar Rodríguez, the Real Madrid loanee, who Aguirre had previously said would never play for the club again.

Real Madrid made rotations, having already been crowned champions. They came principally in defence where Alphonse Areola started in goal, with Éder Militão starting in defence and Lucas Vázquez at right-back. In midfield, Fede Valverde and Isco lined up either side of Casemiro, with Toni Kroos and Luka Modrić rested.

Isco has had a highly disappointing campaign in La Liga this season as he has struggled to establish himself at Real Madrid, starting just 40% of matches. This game against Leganés was just the third time all season in all competitions in which he played the full 90 minutes. Yet, in the space of just 90 minutes, he registered two assists, twice as many as he had registered in the last 2,354 minutes. His return of seven passes into the penalty area is one that he has beaten three times in the past three seasons. The influence of the midfield magician was evident, even if he could be accused of lacking in his defensive workrate.

The first assist came from an excellent set piece. Sergio Ramos did well to get goalside of Leganés captain Unai Bustinza, positioning himself perfectly for Isco to pick him out. His cross was weighted to allow Ramos to push away from Bustinza and gain an extra yard of space to prevent him from pulling him back while it also drew out Iván Cuellar from the Leganés goal in the hope that he could narrow the angle. Instead, it made it an easier target for Ramos to bury his header.

The second reflected Isco in his element. Recovering the ball by intercepting a pass in midfield, he quickly span and in a flash had picked out Marco Asensio’s run on the right. What was impressive here was the timing of the pass, waiting for Dimitris Siovas to step up to close him down before playing the pass into the gap left behind. If Real Madrid can recover this creative passing from Isco, they could have a real weapon in their arsenal heading into their European campaign.

The introduction of Óscar was a clear roll of the dice by Aguirre. On loan from Real Madrid, the club gave Leganés permission to feature against them and Aguirre had previously claimed that Óscar would not feature for the team again. Injury had sidelined him amid speculation that he was reluctant to play after agreeing a move for next season, but he was Leganés top scorer from the players left in their squad. When he came on at half-time, he made an almost instant impact and accounted for 17.1% of Leganés’ xG.

Óscar’s impact came through two approaches, one of which was his off the ball movement. Óscar linked up well with Leganés’ other offensive players as Assalé and Javier Avilés stuck wide. Typically, Óscar would position himself deeper in behind Guerrero, but this would occasionally change. This would allow Guerrero to drop, bringing Nacho with him, and Óscar would look to attack the space in behind with Guerrero showing the vision and awareness to feed him in.

His other form of creating a threat was what lead to his biggest chance which came late on and it would be easy to say that Óscar should have converted, or at least got his shot on target. Óscar’s dribbling allows him to run at players directly and typically his footwork allows him to create a yard of space and get a shot off. This was the case in injury time as tired Real Madrid defending allowed him to create half a yard of space to get a shot away but his effort was high and wayward.

With Zidane keen to give a rest to Dani Carvajal ahead of the Champions League campaign and with no other alternative available, he opted to try Lucas Vázquez at right-back. The forward has dropped in and performed well there in the past, but with the defensively lacking Isco ahead of him, rather than Valverde, he was left more exposed than ever in the position and Leganés, principally through Sevilla loanee Bryan Gil, looked to attack this with pace and primarily on the counter in order to generate greater space.

As can be seen below, Leganés would shift the ball across the field quickly to allow Gil to attack the space behind Vázquez, having a slight advantage with his speed. Then, he would take on Vázquez and look to cut into the box or would pick out a cross. This was an effective approach for Leganés as Gil completed four dribbles past Vázquez, who won just 38% of his defensive duels and committed four fouls, many of which were made trying to prevent moves like this.

Leganés enjoyed great success down Real Madrid’s right flank as with 0.38 xG, Gil registered his highest return as a professional player and also got on the scoresheet, with Assalé later scoring from the same flank. This approach reflected Zidane’s need to manage his squad carefully in the week’s ahead with the Champions League coming up and his team clearly struggling to find an alternative to Carvajal. Without him, Zidane will not want to have to rely upon a player out of position who led to his side conceding two goals against relegated Leganés when they are facing European giants like Manchester City.

Leganés gave their very all to try and secure a heroic survival on the final day. They became the only team to take points off of Real Madrid since the restart and the only team to score two goals against them. It was a remarkable display from the Pepineros and they can certainly feel hard done by given that a different call by VAR could have given them a penalty which may have earned them the win they needed. However, Real Madrid never emerged from first gear and allowed Leganés to play their game and they still could not find the cutting edge to secure that crucial third goal. Their weakness on the right allowed the home side plenty of opportunities and Óscar was a real impact, but it came down to the absence of a clinical finisher and basic defensive errors which once again cost Aguirre’s team. This time, it was a fatal blow.