When the term inverted winger is mentioned the mind quickly envisions Arjen Robben on the right touchline picking up the ball and driving inside on his exquisite left foot curling a shot into the upper corner of the goal evading the desperate lunge of the helpless goalkeeper.

AZ Alkmaar academy product, Calvin Stengs, brings all the attributes required of the modern inverted winger. Stengs possesses a tall lanky build with a height of 187cm and weight of 68kg. He is a tall fast right winger who has a cultured left foot. The 19-year-old checks all the boxes for pace and size but does he check all the boxes required to play as an inverted winger.

The most important skill for an inverted winger is the ability to cut inside on their favoured foot. This unbalances the defence providing the attacking team with several unpredictable options. Calvin Stengs is a silky smooth dribbler with his left foot. He is comfortable hanging out on the right touchline to receive the ball and attack inside.

Here we see Stengs receive out on the touchline, bring the ball down and immediately split two defenders with his favoured left foot. 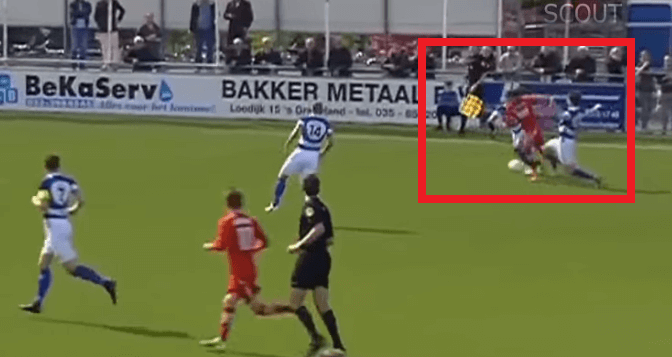 A tight purposeful first touch and explosiveness on the dribble put Stengs into the final third.

Once into the final third through attacking inside, a crucial skill is the curling shot to the back post. The left footed shot from the right side provides a huge edge as the ball curls around the goalkeeper.

Below we see Stengs pick up the ball on the edge of the box on the right side. The defender is positioned to force Stengs to go to his weaker right foot but Stengs off balances the defender and works onto his favoured left foot.

The defender is positioned to force Stengs to go to his weaker right foot but Stengs off balances the defender and works onto his favoured left foot. He creates just enough space to squeeze off a curling left footed shot.

The keeper can only watch hoping for the crossbar to save him.

The curling left footed shot is definitely in the toolbox of Calvin Stengs.

Inverted Winger as Playmaker  via the Through Pass

Another important skill for the inverted winger is the ability to cut inside and play a through pass. The defence often freezes as the winger moves inside allowing dangerous through ball opportunities. Weighting a through pass while moving across the face of the defence at speed is a difference-making skill.

Below we see Stengs receive the ball between the lines.

Stengs takes a touch inside across the face of the defence putting the ball onto his left foot. This allows the other attackers to break the back line with a hard run. 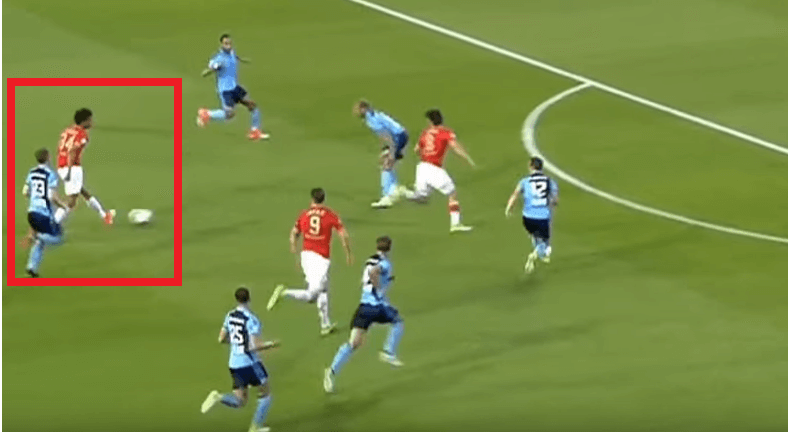 Stengs does a great job of playing at speed with his head up. Here Stengs shows the ability to freeze the defence and be a playmaker from the inverted wing position. The result is a one on one with the goalkeeper.

Stengs ability to dribble across the face of the defence and make a play to runners in behind is a prototypical skill that teams look for in an inverted winger.

Inverted Winger Bringing in Overlapping Outside Back

Below you can see Stengs pick up the ball in the inside channel or halfspace with the outside back on the touchline.

Stengs does a great job of squaring up to the defence and going at speed to draw the defenders towards him.

Once the defence steps towards him, Stengs has a window to put a through ball in behind.

Again we see a perfectly timed and weighted ball in behind the defence. This time it is to an overlapping attacker. The result is a fantastic scoring opportunity for the #10.

This scoring opportunity was the result of Stengs ability to drive at the defence at speed and accurately play a through ball in behind.

Besides being able to cut inside and make the plays that are demanded of a modern inverted winger, Stengs also has the ability to get in and stand a cross up at the back post with his right foot.

Here we see Stengs receive the ball going into the box on the right side.

Stengs has time and space available to him. Instead of cutting onto his left foot, he puts it onto his right to stand a cross up to the back post.

The result is a header goal on the backside. The ability to competently put balls in with his right will be important to keep defenders honest in their defensive positioning against him.

Stengs has all the tools required of a modern inverted winger.

The future is bright for the young Dutchman. Definitely a talent to keep an eye on in the coming years. He possesses a great left foot. Confidence on the dribble and ability to make weighted passes while playing at speed are attributes that cause him to stand out. Once he secures consistent playing at AZ Alkmaar, look for bigger teams to start poking around.