Callum Wilson: The rise of the Bournemouth and England striker

Who would’ve thought that the guy that played for the non-league Tamworth six years ago would make his England debut anytime soon? Callum Wilson’s first cap didn’t come the easy way as the Englishman had quite some time to build on his self-confidence and work hard so he can find a place into The Three Lions’ squad. Surprisingly or not, the striker felt absolutely comfortable in his new role and took advantage of his opportunities.

This call-up is a result of his solid performance on a club level as his team Bournemouth is in a battle for the sixth place with Manchester United. The 26-year-old has six goals and four assists in 12 games so far off the season, adding one goal in his debut for England against the USA. He managed to score eight goals in twice as many games last season which is also a proof of his improvement.

But let’s see what made Gareth Southgate call him up and did he meet the expectations?

Obviously, Wilson’s striking force is the one that caught everybody’s eye. His positioning and intelligence in front of the goal make him a key part of Bournemouth’s successful season, but also his impact to the team’s performance with through passes in crucial moments make him be a preferred option for England’s forward line too. He is able to pass through his opponents easily while reaching the final third so he can create chances. His defensive contribution needs some improvement as he often experiences difficulties to hold on to the ball – he lost the possession six times against Newcastle (1:2). Eddie Howe uses him in different formations.  As a lone striker (4-4-1-1) against Newcastle and Manchester United, but mostly as a centre-forward in partnership with Joshua King, David Brooks or Ryan Fraser (4-4-2, 3-4-3).

By these graphics, it looks like he is most productive in a two or three-man offensive line when he has some support and more freedom. He averages 2.28 shots per 90 mins with half of them on target.

Callum is far from the perfect complex player as only 36.5% of his actions per 90 minutes are successful. But he is the one who gets the work done: he positions well, has a good vision and the needed finishing. His off the ball movements allow him to be on the right place at the right time and take advantage of the opportunities.  He has now scored 50 goals in 129 games under Eddie Howe. He has created some big chances for his teammates this term and tends to make 1.8 assists per game. 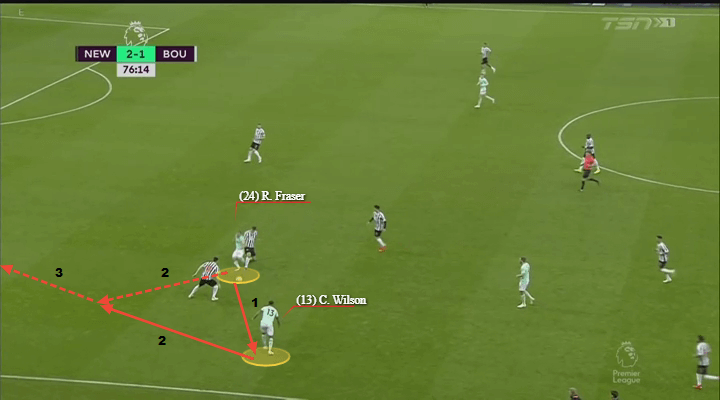 Against Newcastle, he made a great combination with Ryan Fraser and gave him a perfect through pass. 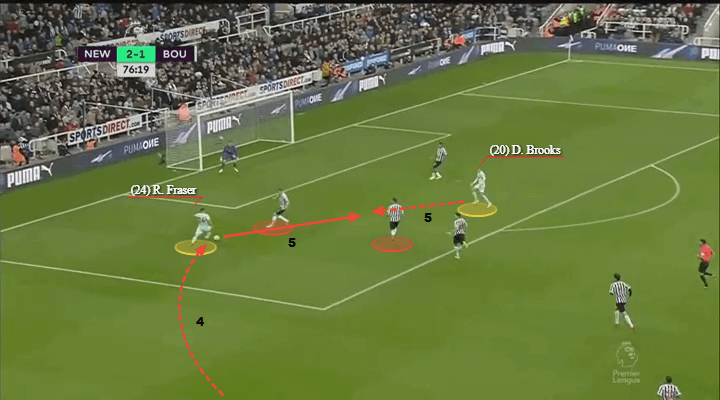 Fraser managed to make a run to the box where David Brooks came as a support to receive the ball. A nicely built attack that shows Wilson’s importance. 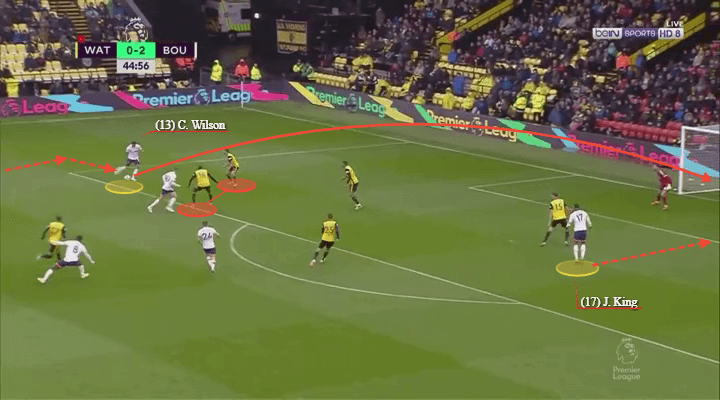 In here he demonstrates a great crossing ability, although his overall accuracy is something he could work on. After reaching the edge of the box he slowed down the tempo so his teammates could position well. Then he saw the opportunity in a cross to Joshua King who managed to score a header.

Usually, against teams with a high approach on possession Bournemouth’s players create their chances mostly on counter-attacks, sending early balls to Callum whose instinctive finish makes the opponents go behind. Wilson’s also pretty dangerous when allowed to drift through the middle. But when out of possession his job is to put pressure on the midfield line. His task against Chelsea was to prevent Jorginho from getting on the ball.

Let’s take the game against Manchester United. The team built up the attacks through the middle and that is where Wilson’s impressive partnership with the 21-year-old David Brooks was evident once again. 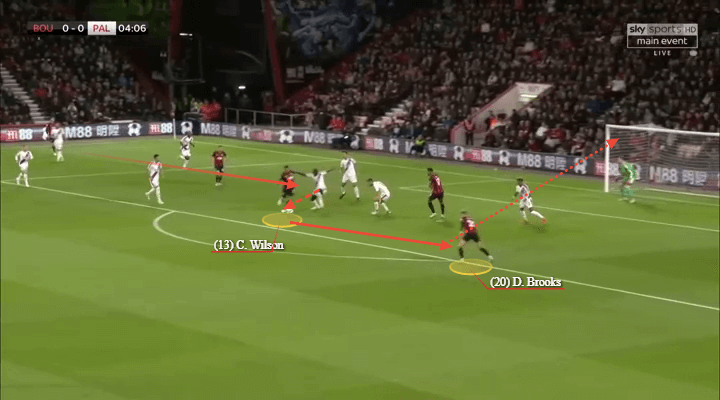 This situation is proof of their connection. After dribbling past his opponent, he delivered to Brooks. Despite being under pressure his decision-making allowed him to get the best out of the situation.

He needs to put some more effort

As I mentioned Callum needs to put some more defensive effort and work on his duels. He manages to receive the ball and continue forward against inexperienced defences but he struggles to do it against more experienced ones. He averages 11.1 offensive duels per 90 mins but wins only 39% of them. Defensively the things seem even worse – he dives in only 3.07 defensive duels per game and wins a worrying 15.3% of them. He doesn’t dive into tackles and rarely makes interceptions. His passing accuracy is not among the highest – with around 69% of his passes being accurate.

We could say that he had a successful start of his international career. He took part in England’s 3-0 win over the USA in a friendly player during the international break.

Despite lacking the good finish throughout the game he managed to score on his debut and make it 3-0. He deserves a credit for his positioning as he was often seeking opportunities sneaking between the defenders and he dribbled successfully past his opponents on four occasions. But then again he lost half of his offensive duels which didn’t allow him to reach the goal more often. He managed to shoot four times with two of his shots being on target. 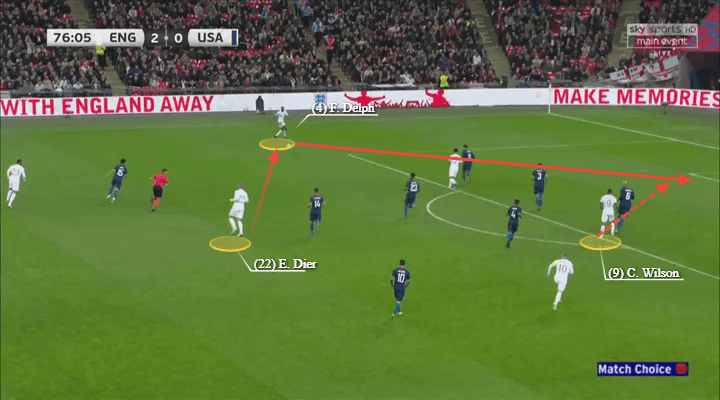 His first goal for his country was a result of his awareness and off the ball movement. While Fabian Delph was wondering how to continue the attack, Callum reached the edge of the goal area and was ready to receive the ball. It all resulted in him scoring in his debut for England. 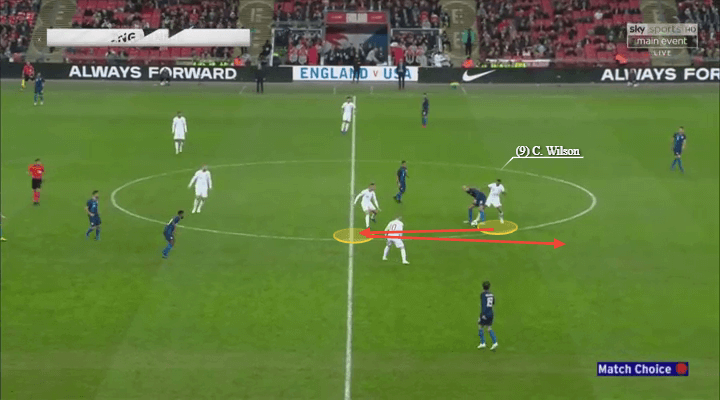 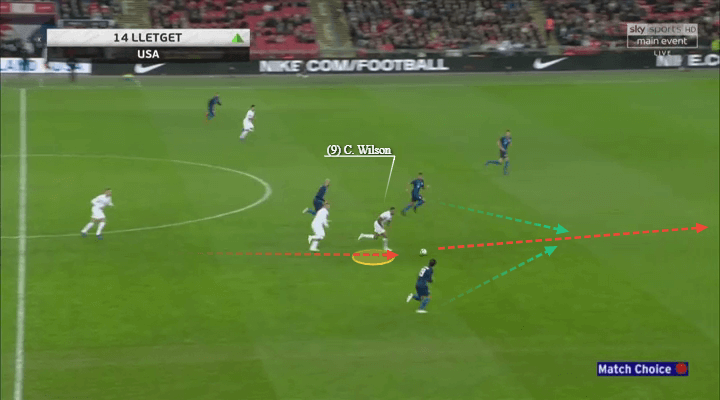 One of the best actions in his first cap was actually a recovery of the ball that allowed him to make a dangerous run towards the goal and dribble past his opponents.

He didn’t take part of the UEFA Nations League win against Croatia, but he showed that he could be a great option for Gareth Southgate although it may be difficult for him to find a starting XI spot with the likes of Jesse Lingard, Harry Kane, Marcus Rashford and Raheem Sterling. Callum may not be Southgate’s his first choice but he can adjust to a variety of formations which could be pretty helpful. He surely won’t have such a great impact on the team’s performance as it is in Bournemouth, but he’s worth a try especially so some of his English teammates could get some rest.