Borna Sosa is a 24-year-old Croatian left-back currently playing for Stuttgart in the German Bundesliga. Sosa, an international with Croatia, has been a key part of the Stuttgart team this season, who have had an underwhelming second campaign back in the top tier of German football. Sosa has impressed enough to be linked with both Tottenham and Arsenal, whilst with West Ham’s ever-present Aaron Cresswell turning 32 this year, and with Arthur Masuaku not providing competition for his starting berth, it’s highly likely the Hammers will be monitoring his availability as well.

Sosa is an attacking full-back who is comfortable playing in a back four as a wing-back in a back five. He is often seen bombing up and down the left-flank and consistently providing an attacking presence, whilst he has put in some stellar defensive performances this season too.

This tactical analysis and scout report will highlight the key traits of the full-back, whilst providing an analysis of the team tactics Sosa suits.

Sosa does an excellent job of providing both height and width in attacking phases. As a result of this, he receives the ball in areas where he has space to cross. Sosa is one of the most prolific crossing left-backs in the Bundesliga, as indicated by the following image, behind only RB Leipzig’s Angelino, and Hoffenheim’s David Raum. These two left-backs have a higher volume and slightly better completion than Sosa, but as we can see, the Croatian is still in their company for being outliers in this data set. 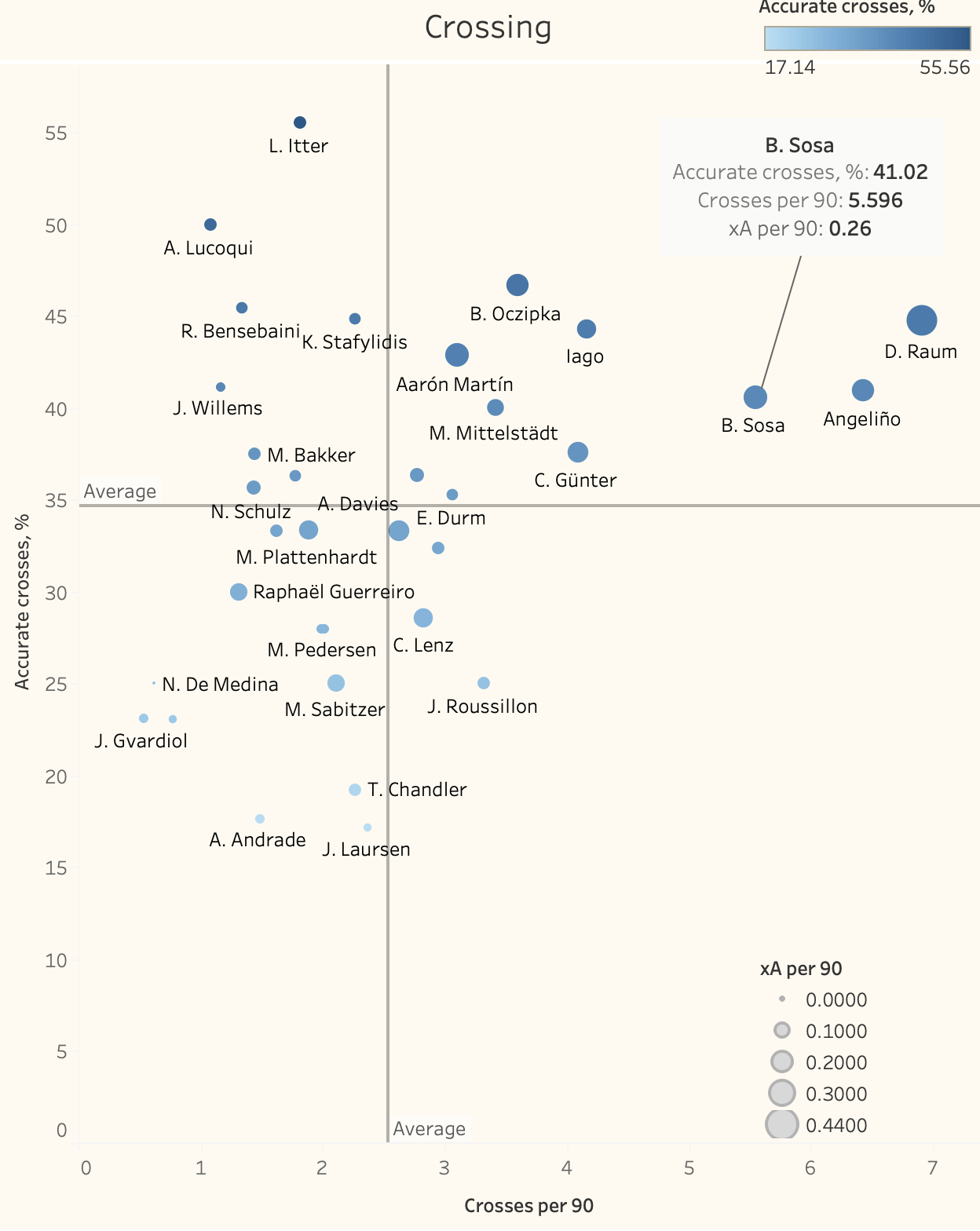 We can see that Sosa is hitting a volume of crosses well above the league average, whilst his 41% completion is outstanding given such volume. The plot point size also indicated his expected assists per 90, when measured against the rest of the players in the league, and his 0.26 per 90 is very strong as well, with the aforementioned Raum, and Aaron Martin only bettering him here.

Sosa is able to deliver the ball from a variety of areas, regularly crossing from deeper areas, or close to the 18 yard-box, whilst he can drive on the ball all the way to the byline before looking to pull the ball back across goal.

When delivering from deeper position, Sosa has shown excellent vision at times this earlier, striking the ball whilst on the run and yet still managing to accurately access the space behind the opposition back line.

We can see him doing this with expert precision in the following image against Union Berlin. 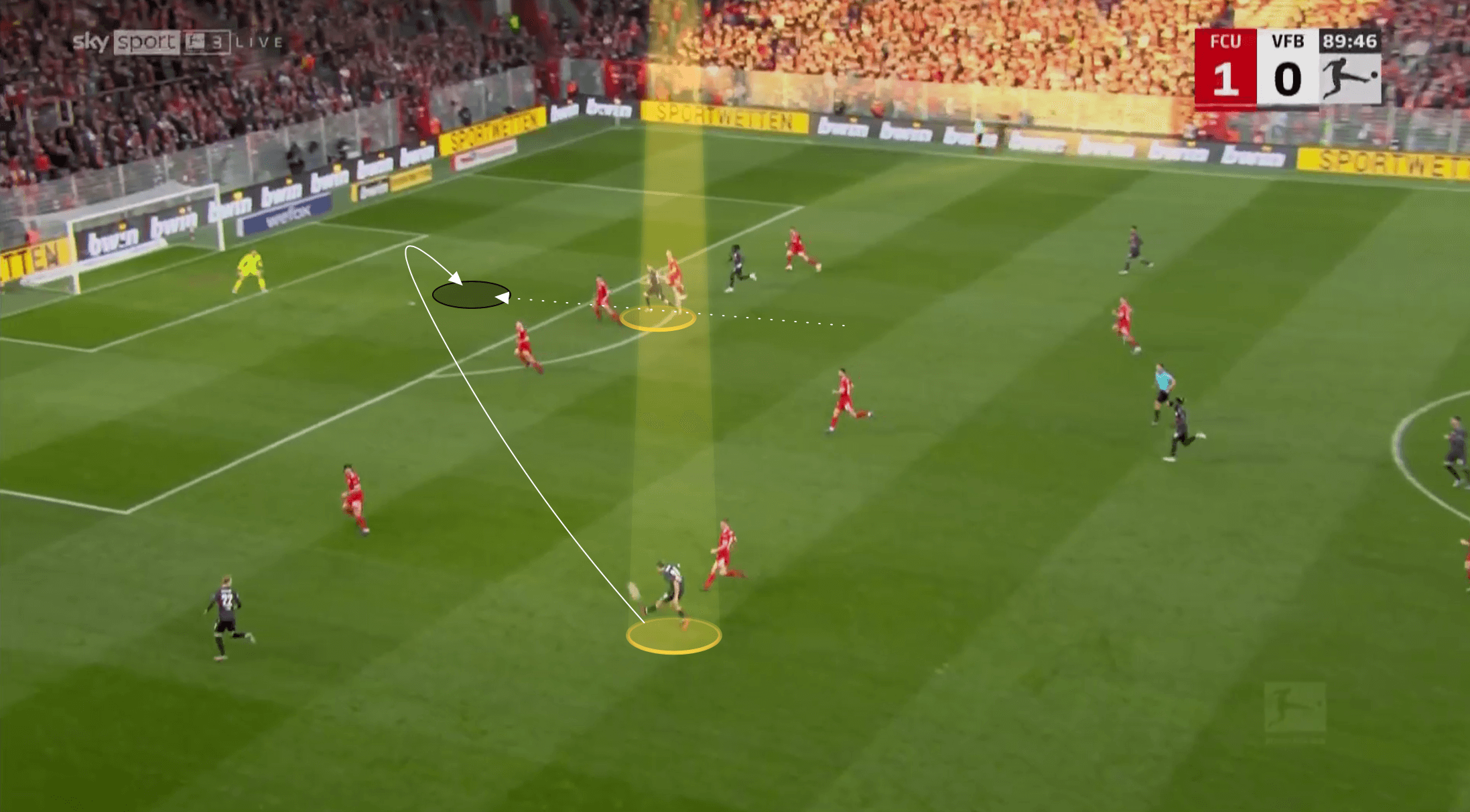 Sosa will cross from these more narrow positions, and is comfortable moving inside, as we will detail in a later section of this analysis.

However, he holds the width as well. Rarely does he immediately take a high position, often moving forward with possession, but he will make late runs to access the space to the wing.

As a result, he can be picked out through lofted passes into this space, as shown below, or a simple lay-off as he overlaps a teammate positioned further inside. 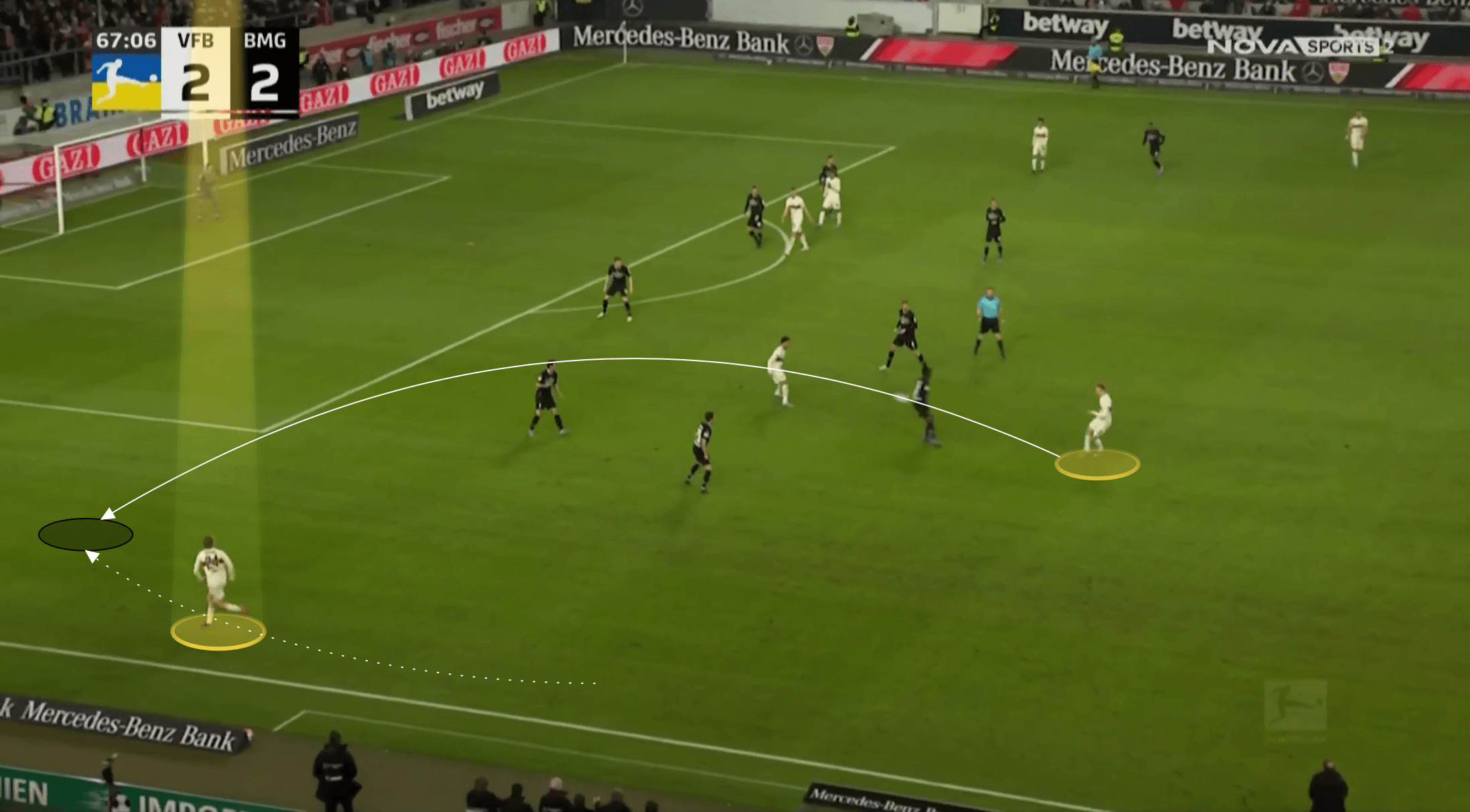 From these positions he shows remarkable composure to find a teammate in a congested area, once again crossing whilst on the run. 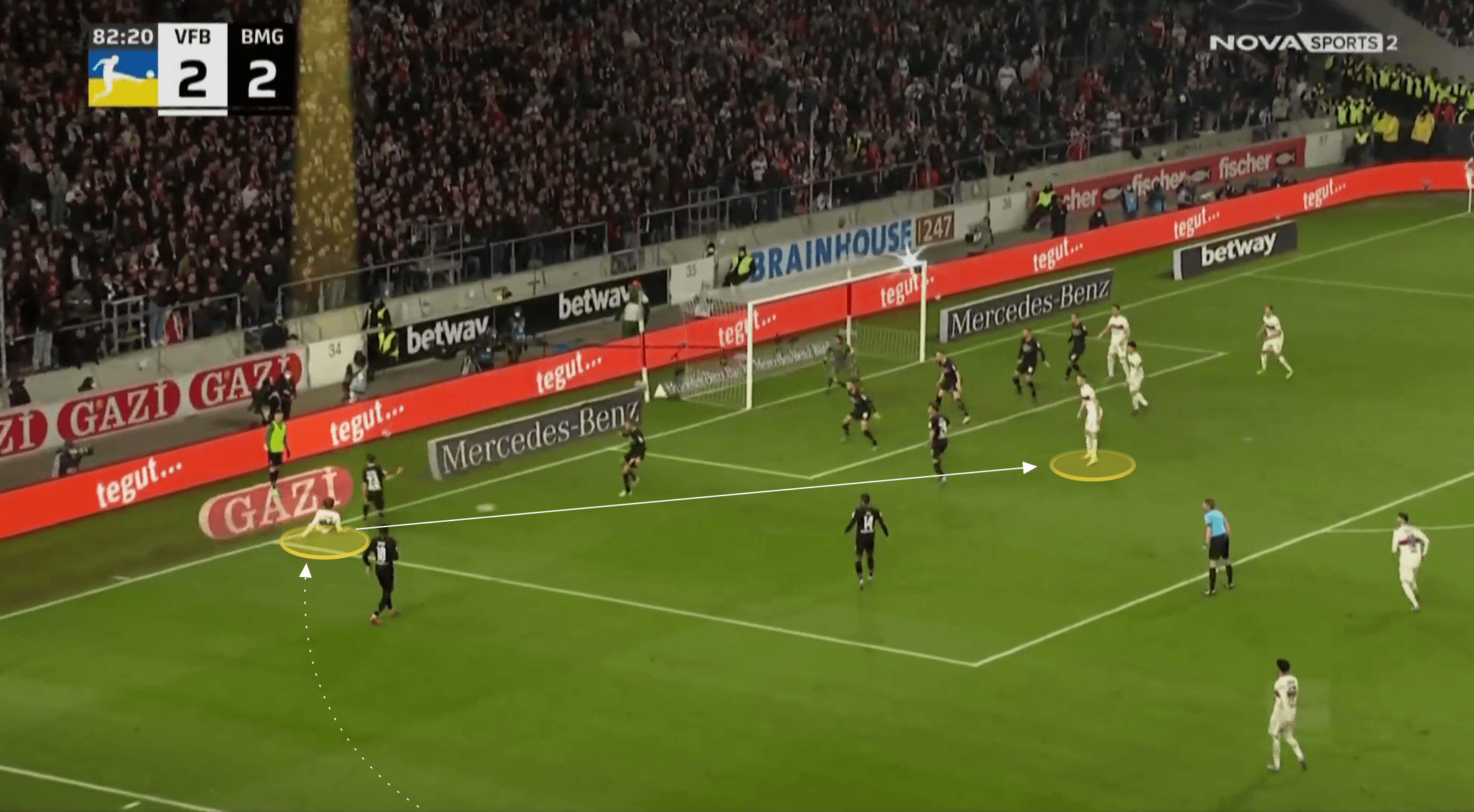 Sosa can find his teammate through pulled-back crosses as in the previous example, but also, given Kalajdzic’s 6’7” frame, Sosa is often able to pick out the centre-forward with crosses played in the air.

Below we can see Sosa hesitating on the ball as if to play the pass back to his highlighted teammate. This is enough to shift the momentum of the opponent pressing him towards this player, and Sosa takes advantage of this, driving down the line. 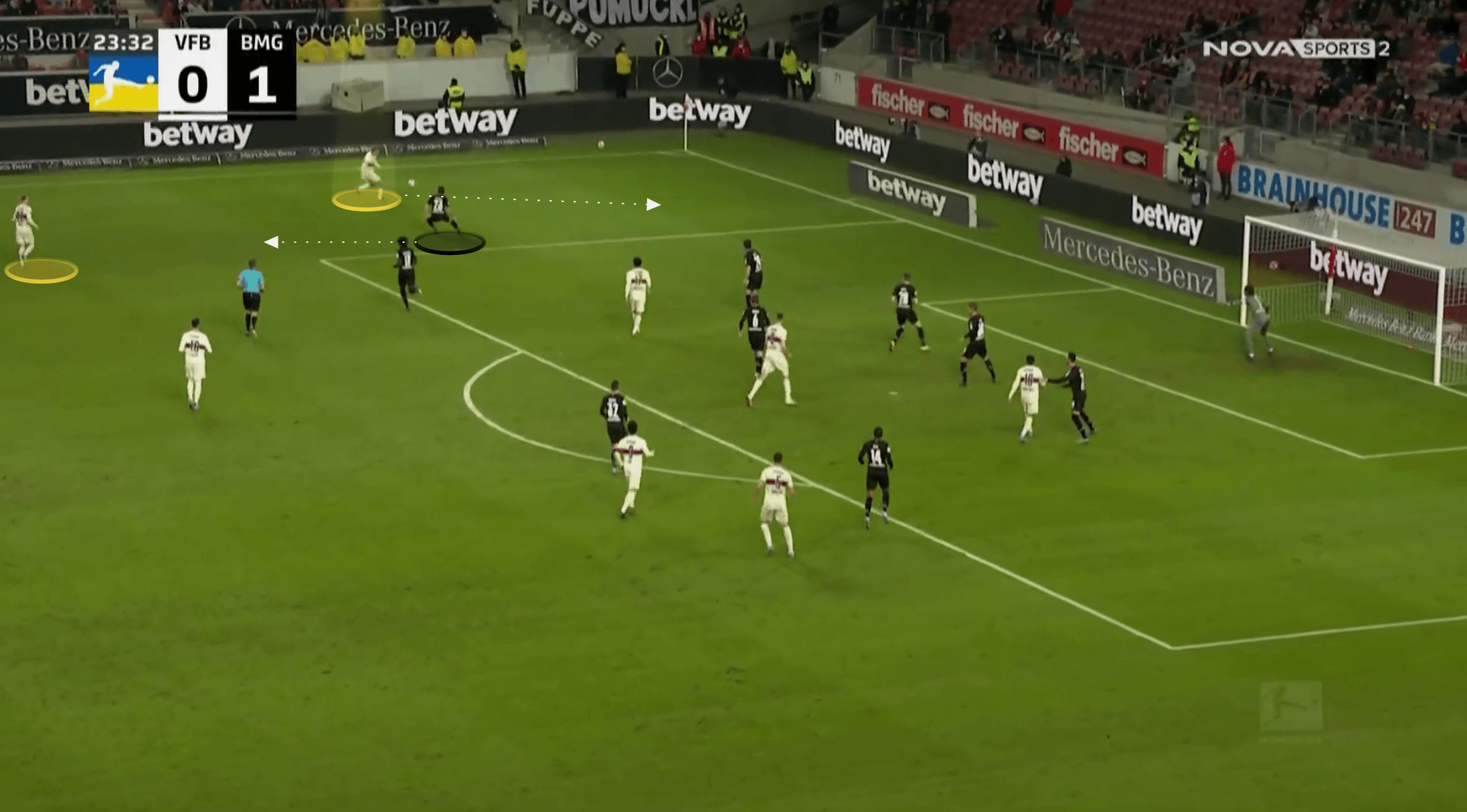 He can hang crosses, although still maintains enough pace on the ball to discourage the opposition goalkeeper from coming off of his line to claim the ball. Hanging the ball when crossing from such proximity allows Kalajdzic to easily outjump any markers, as we can see in the image shown below. 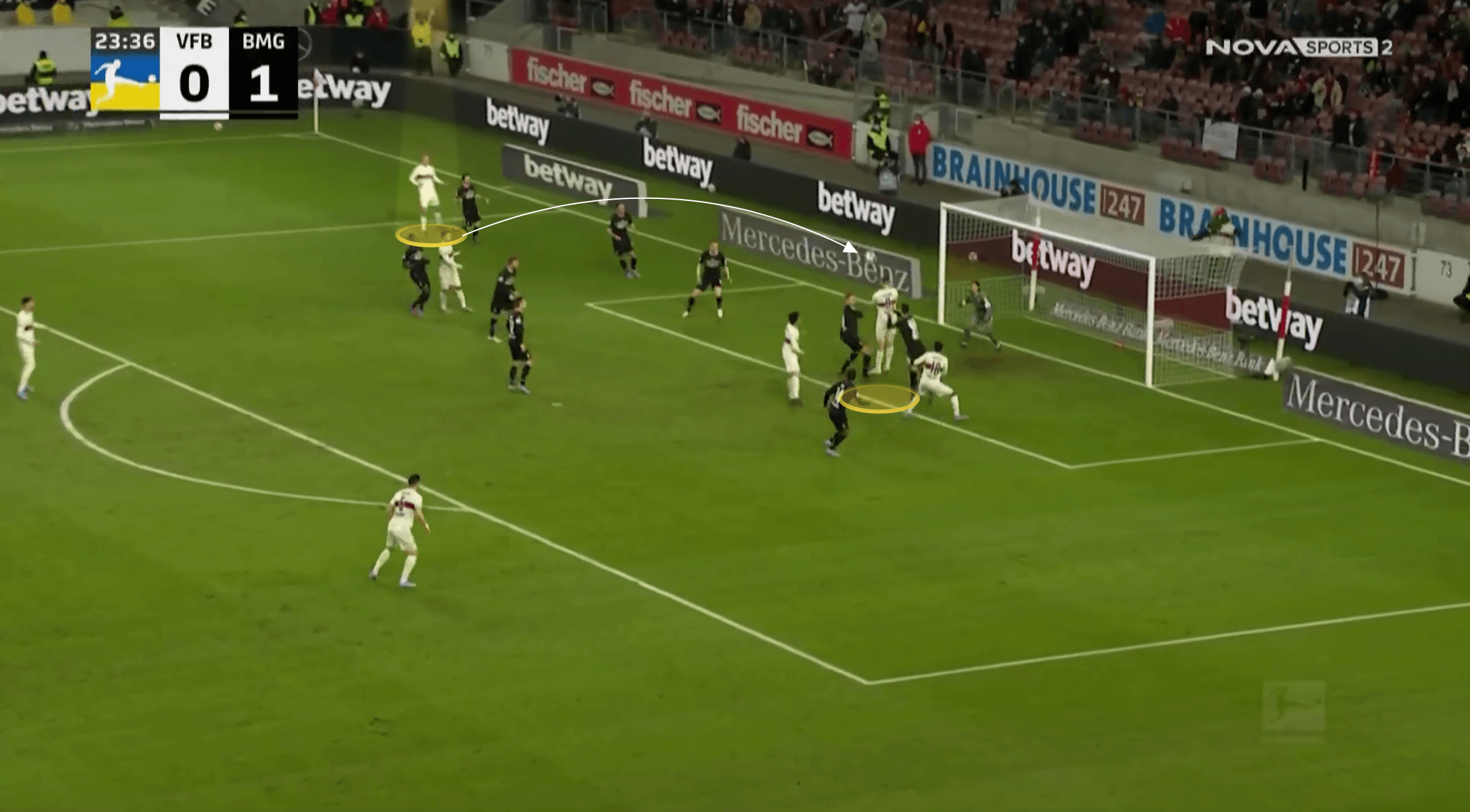 Sosa is blessed with an excellent change of pace and has consistently good ball control. As a result, the left-back is a dangerous dribbler and can be used to progress the ball with his feet from deeper areas inside his own half, whilst he relishes being isolated against an opposition defender in a 1v1 situation, where he can break past them, unlocking the defence.

The graph shown below allows us to see that both his volume of dribbles and completion are well above the league average. The plot point size shows us that his 1.04 touches in the box per 90 isn’t overly high, so whilst he attempts a strong number of dribbles per 90, these are generally attempted in areas wide or away from the box, rather than using his dribbling to penetrate the area, despite his often advanced position in attacks. 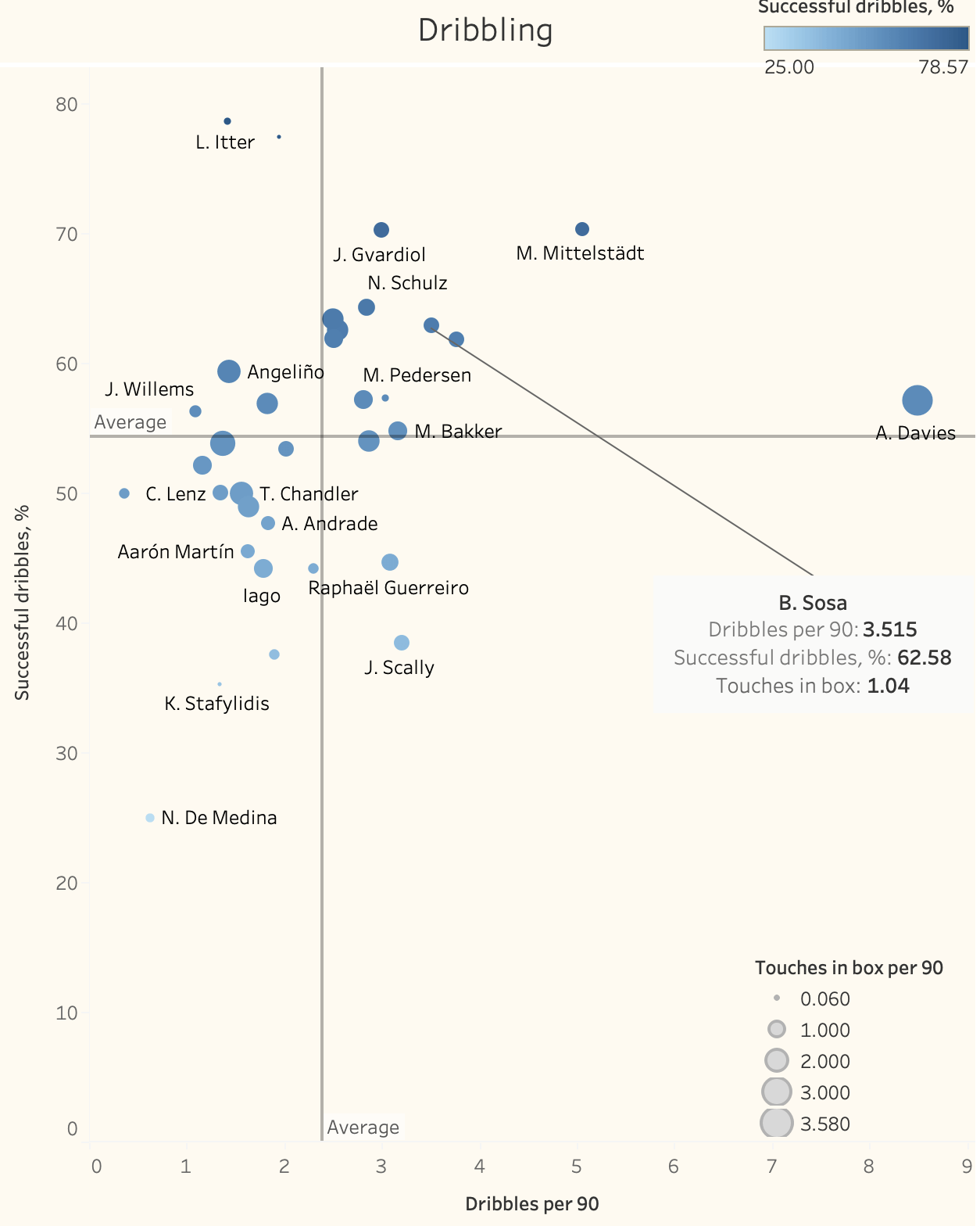 Sosa isn’t afraid to move inside into the half-spaces or at times even narrower. However, he generally starts wide, with this position giving him space to shift into if he sees fit to.

We can see this occurring in the following image, as he plays a short pass down the line before under-lapping his teammate and providing a pass option inside. 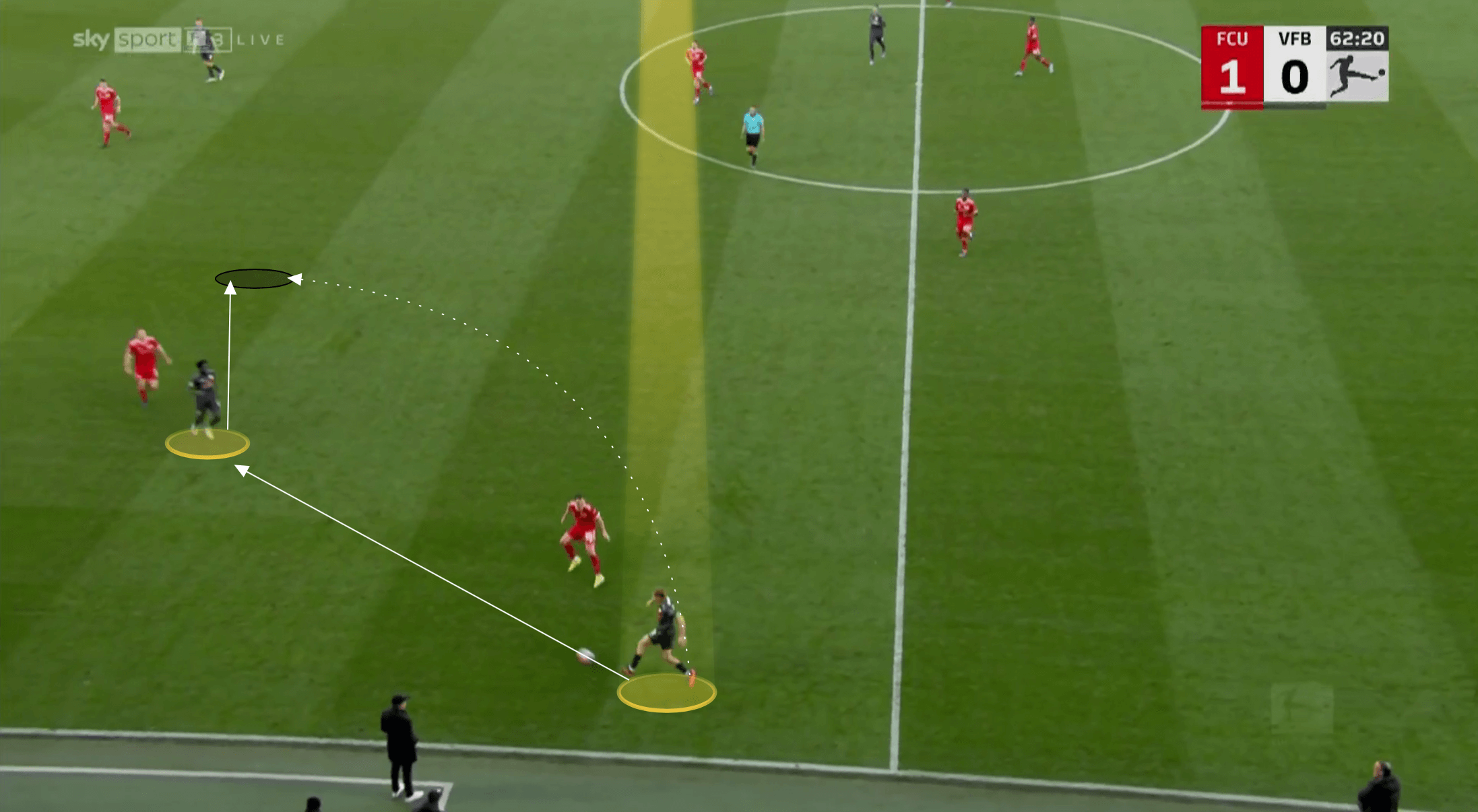 Sosa can be so dangerous when he does this, accessing space and getting on the ball, as he does in the next image following the pass back into his path from his teammate. Sosa understands his strengths as a player and doesn’t overcomplicate the dribble. He understands he can use an aggressive touch past an opponent before rounding them. We can see him doing exactly this as he touches past the opponent before running the other side of them. 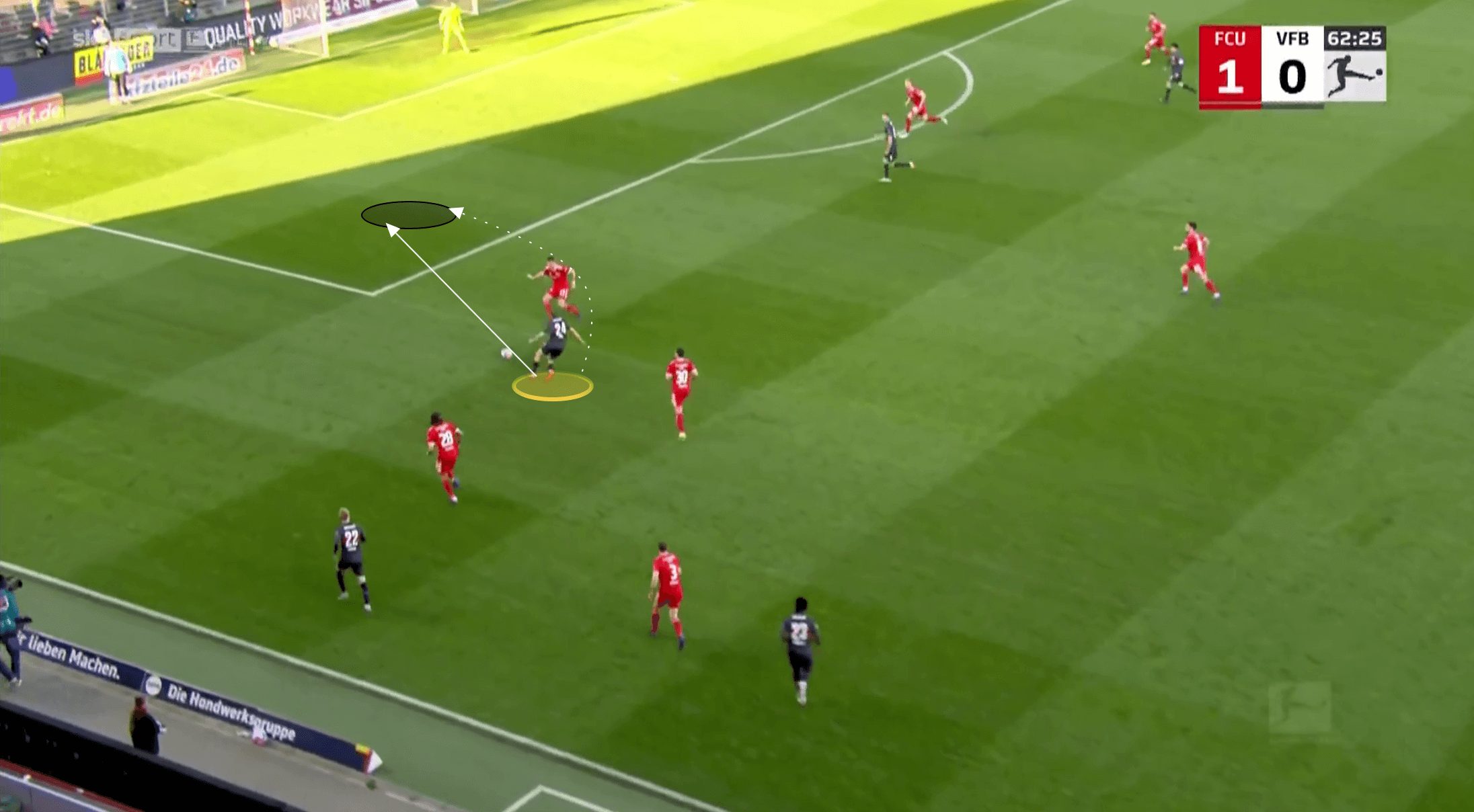 Despite his proclivity for keeping it simple, Sosa still isn’t predictable. He is a very left-footed player, as so many left-backs are, and yet he is confident exiting either side of the defender. So many one-footed players will stick to exiting onto their stronger foot, but as we can see from the highlighted example, as Sosa winds up as if to cross like in the first example of his crossing shown in this analysis, he instead darts inside into the space available there. 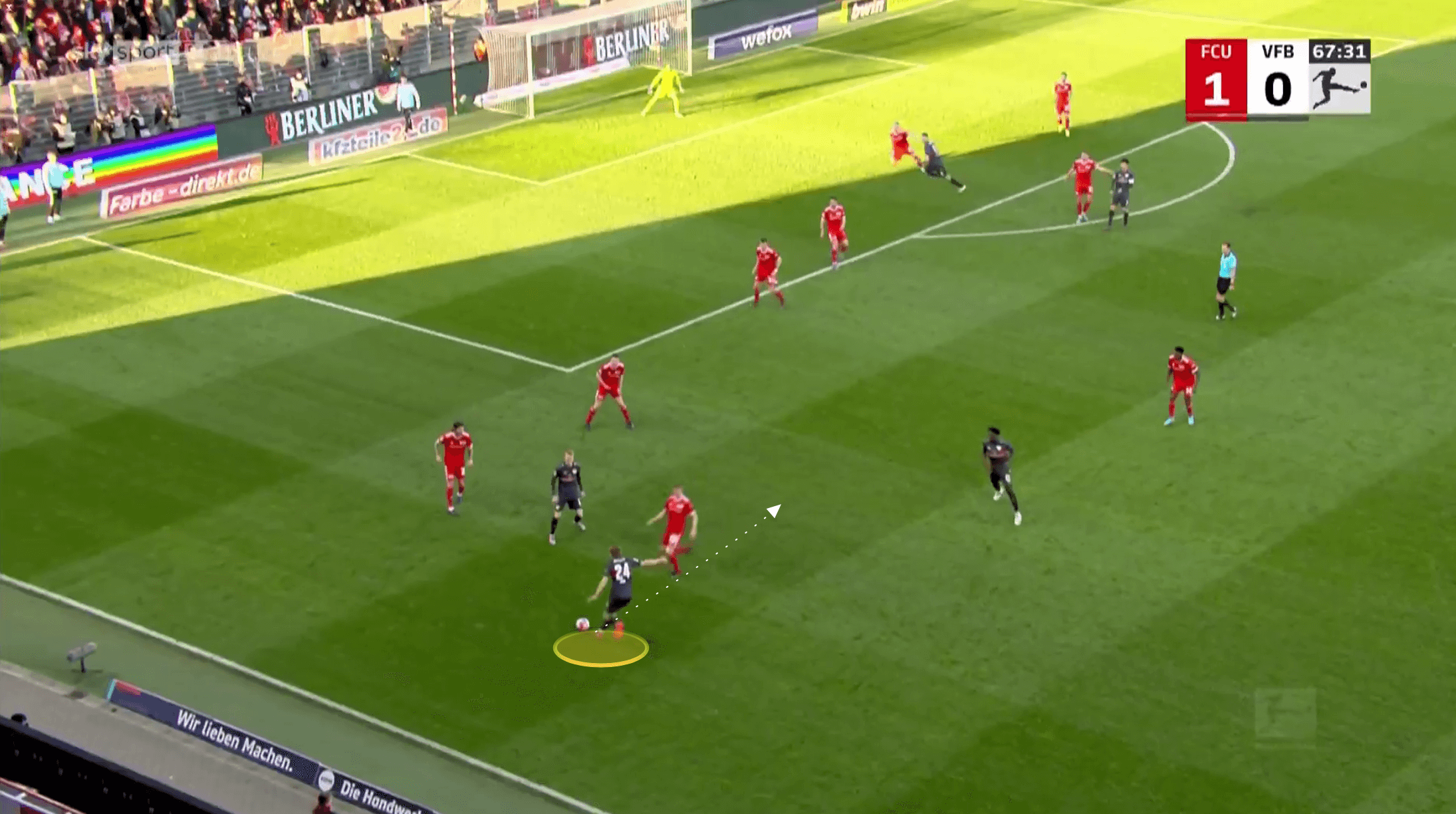 The defensive phase is likely where Sosa stands out less than he does in possession phases. He isn’t a defensive liability by any stretch, however, he isn’t overly active or dominant in this area of his game either.

We can see in the following graph how Sosa is involved in fewer defensive duels than his other left-back peers in the Bundesliga, registering just 4.1 defensive duels per 90. However, despite this low level of activity, his 61% win rate is marginally above the league average, and so while he isn’t a dominant defender, he still performs admirably when called upon. The plot point size of each player in this graph indicates padj. interceptions per 90, where Sosa’s 5.46 is about average when measured against the other left-backs. 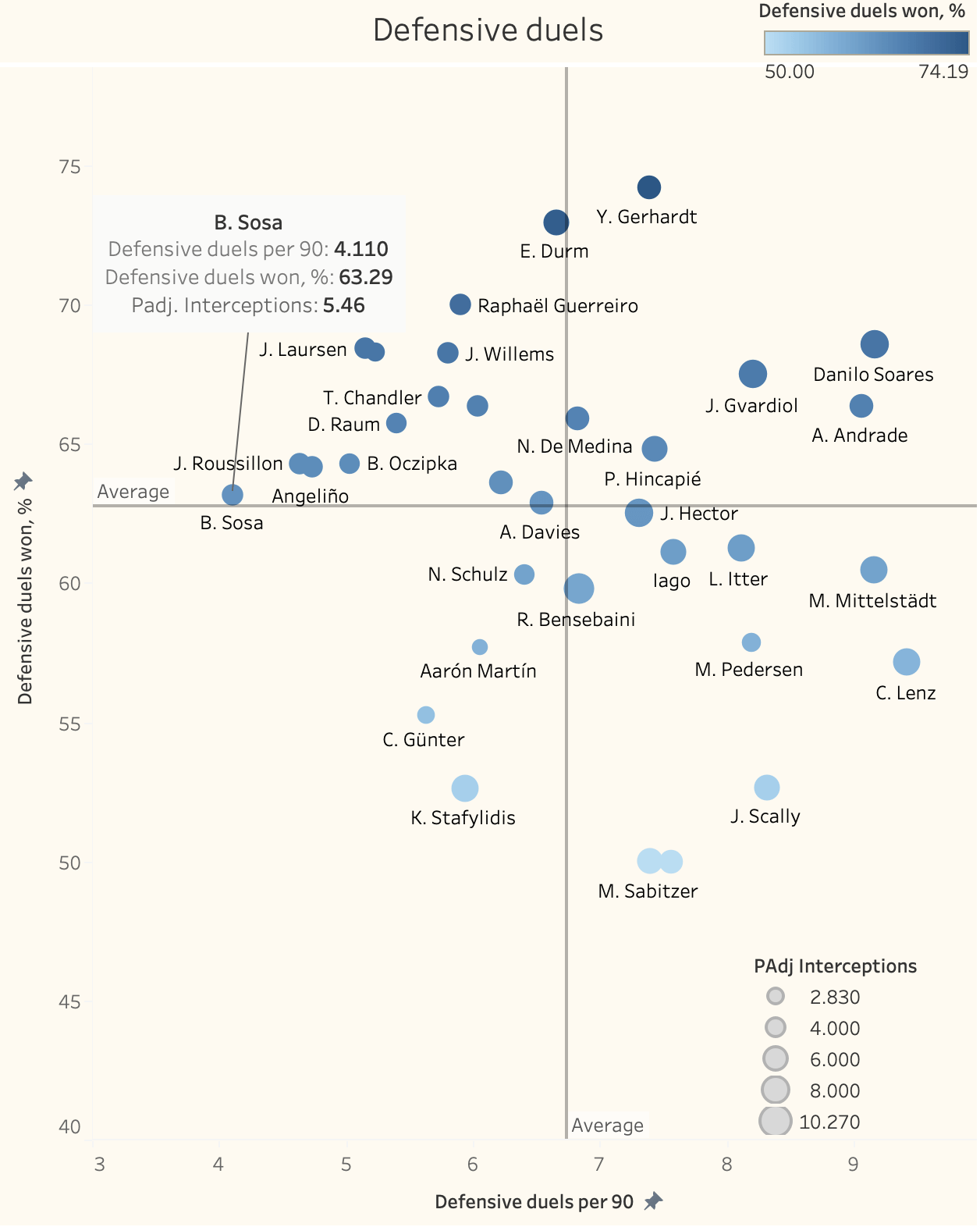 His overall awareness of dangerous moments and his ability to read the game and drop into positions where he can make interceptions is good. Sosa will cover his inside centre-back if they are drawn out of shape and has the pace to make recovery runs. We can see him using this proactive approach to covering whilst showing impressive game-reading in the image shown below. He sprints back covering the man on his wing but also anticipates his centre-back missing the ball, who is stepping forward in a bid to intercept the ball himself. As a result, Sosa is able to successfully cover him and make the interception, before recycling the ball back to his goalkeeper. 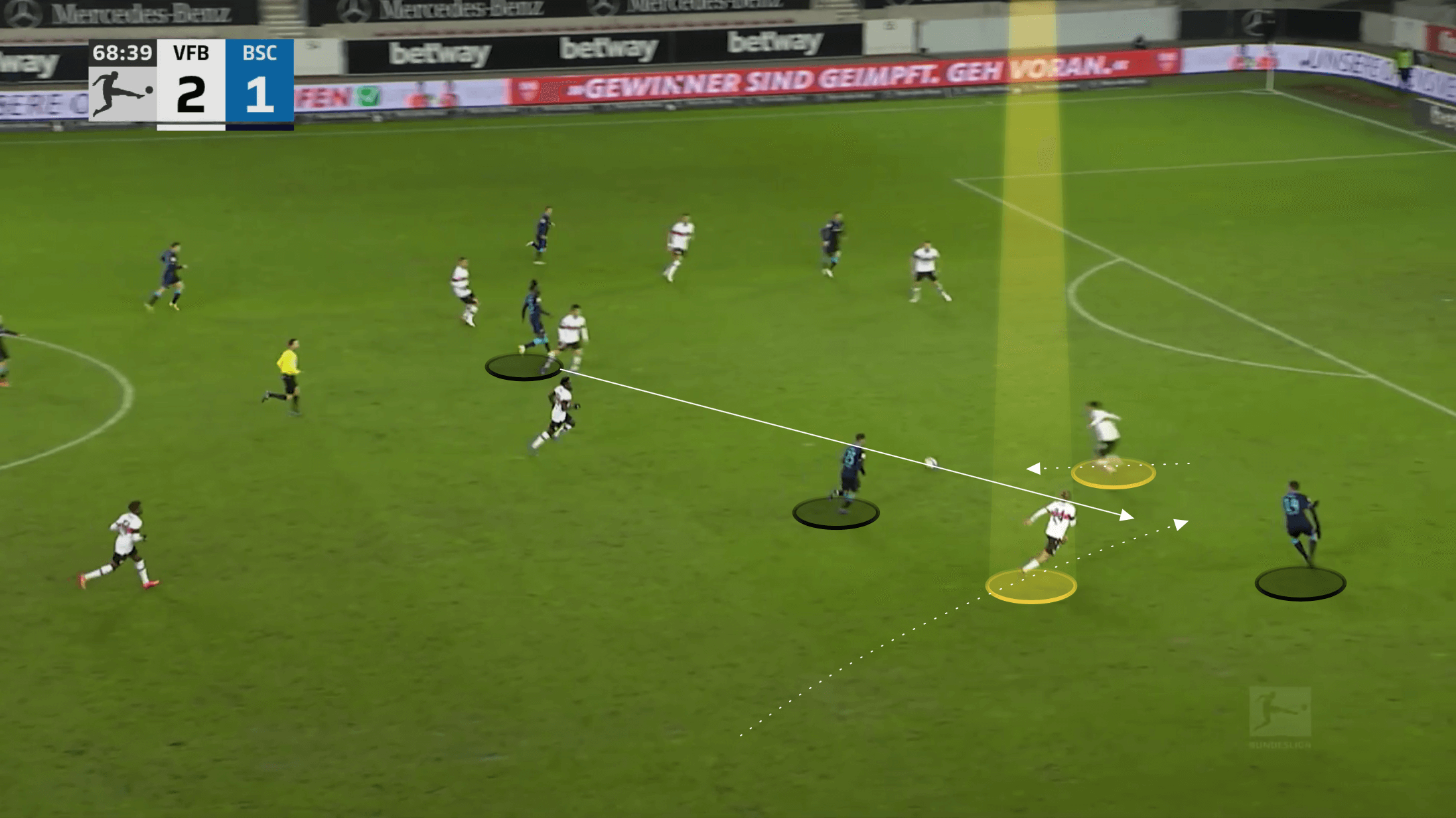 He has a mixed approach to engaging an opponent defensively. Firstly, he is quick to close the space down. When he doesn’t have the cover behind him to be more aggressive in the duel then he will keep some distance between himself and the ball-carrier, but still take a low-down and side-on position for the most part. He nearly always maintains this low-down position but admittedly can get caught flat too often at times.

He is cautious with his positioning though and doesn’t get drawn out until a pass has been played out wide. He is careful not to leave an inside passing line, instead sticking relatively tight to his inside centre-back and showing the opponent outside. 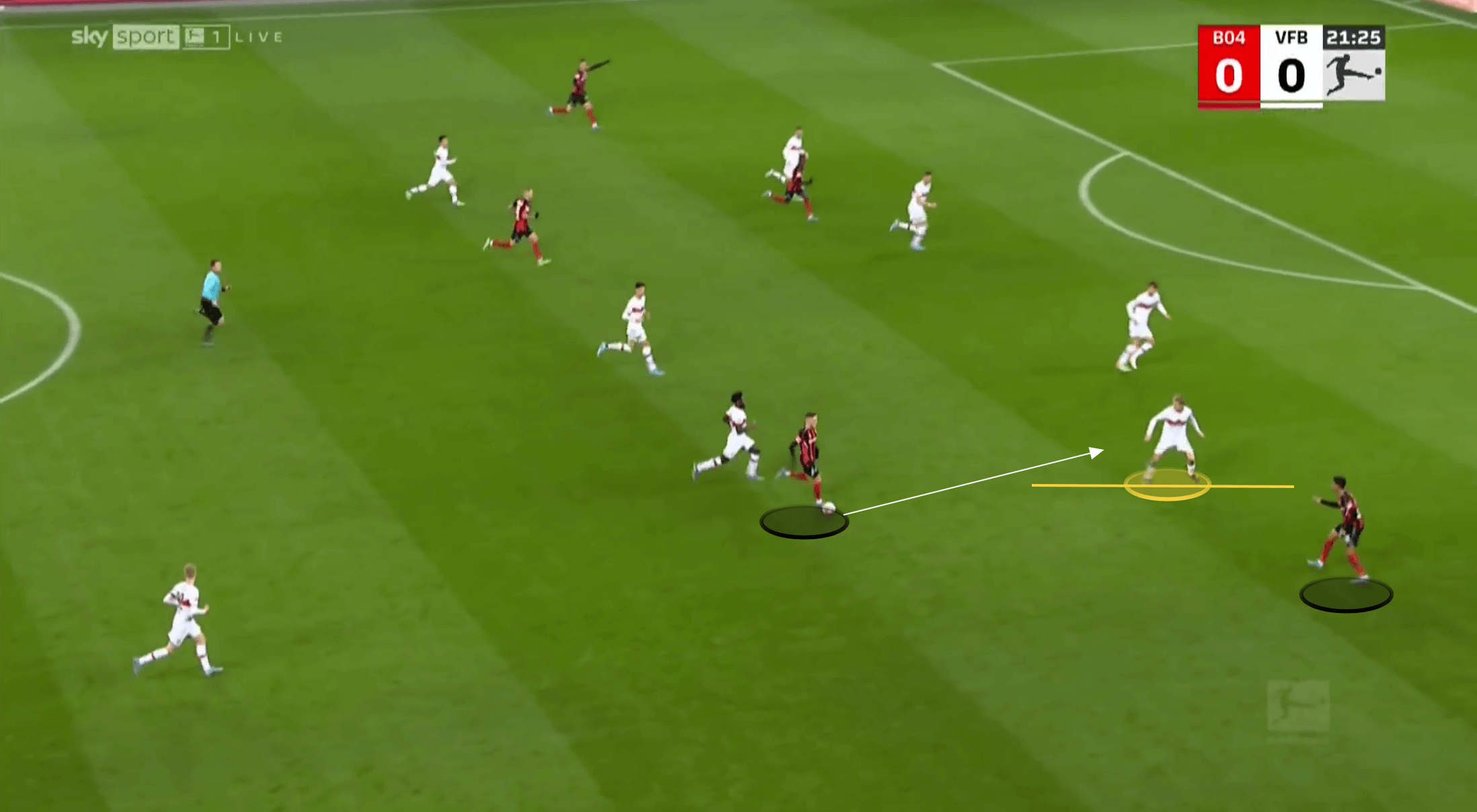 However, once the ball has been played out wide, and he knows he has cover around him, he can be very aggressive in stepping to them and may look to win the ball early. He doesn’t lunge in but can get caught flat or flat-footed as he attempts to win the ball, and may lack patience or good deceleration in such an instance. We can see him being beaten too easily in the following image as he looks to win the ball immediately as he presses the opponent. 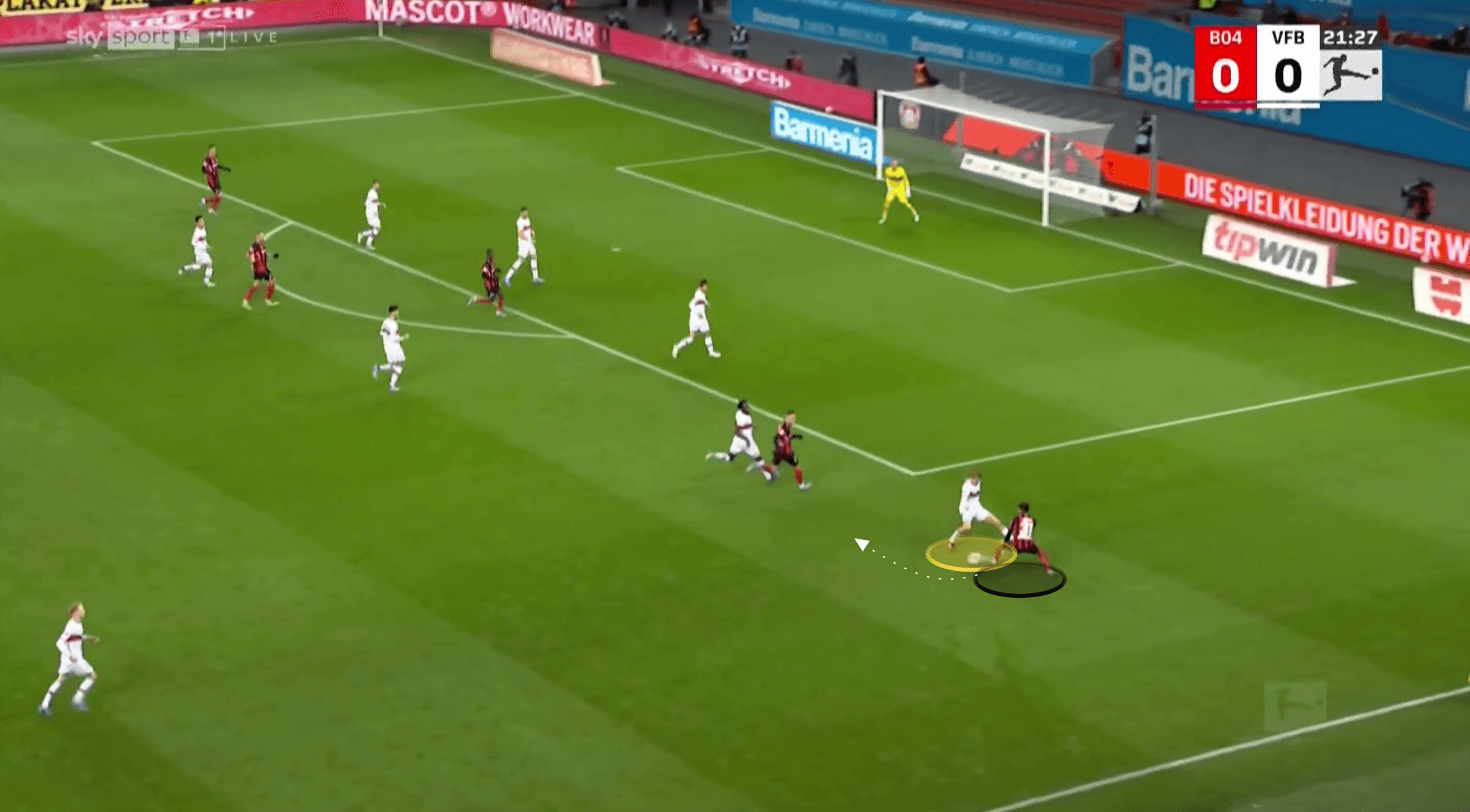 Sosa is a quality option as an attacking left-back, and for teams who value high-flying full-backs or who play with wing-backs, he would represent an excellent option – and at just 24 years of age, is still some way from playing his best football just yet.

Sosa will consistently provide height and width in attack, although generally makes these forward runs late, rather than pushing high early and waiting for the ball to come to him. He is a quality dribbler, whilst his array of crosses makes him a consistent threat from the left wing.

He isn’t a dominant defender but generally performs well when called upon and shouldn’t be seen as a weak point in a defence. Whilst his approach to winning the ball in 1v1 duels is mixed with its quality, he generally keeps good positioning throughout the defensive phase and has an impressive reading of the game.