This summer, there was a lot of speculation over whether Marko Livaja would opt to stay at Hajduk Split or move onto some better league since he performed impressively in the second part of the season after joining Hajduk from PAOK. Livaja opted to stay which instantly made Hajduk more ambitious this season. We witnessed, in Europa Conference League, two faces of Hajduk, one with Livaja in the squad where they won 2-0 against Tobol, but in the 2nd leg he didn’t play and they lost 4-1 after extra-time which eliminated them from the competition. The situation where he is the biggest star in the squad and focal point brings the best from Livaja and it is clear that he is now at his peak mentally, after a lot of problems in the past both on and off the pitch.

It is no coincidence that Livaja made a transfer to Serie A giants Inter Milan in 2010 as a 17-year-old and then played for multiple clubs afterwards, mostly in Italy and Greece, but also spent one season with La Liga side Las Palmas where he collected 7 goals and 4 assists in 26 appearances. Through this tactical analysis, we will take a look at Livaja’s creative qualities which could help the Croatian national team to unleash its full attacking potential. We will start this analysis with a player overview section where we will mention basic information about Marko Livaja and his performance through data from the last calendar year.

Marko Livaja is a 27-year-old and Transfermarkt values him at €3.5 million. Livaja is listed at 182 cm and he is predominantly right-footed. In Hajduk’s tactics, he is mostly used as an attacking midfielder in a 4-2-3-1 formation, but he performs in a free role often drifting wide to receive the ball on the touchline and in half-spaces. 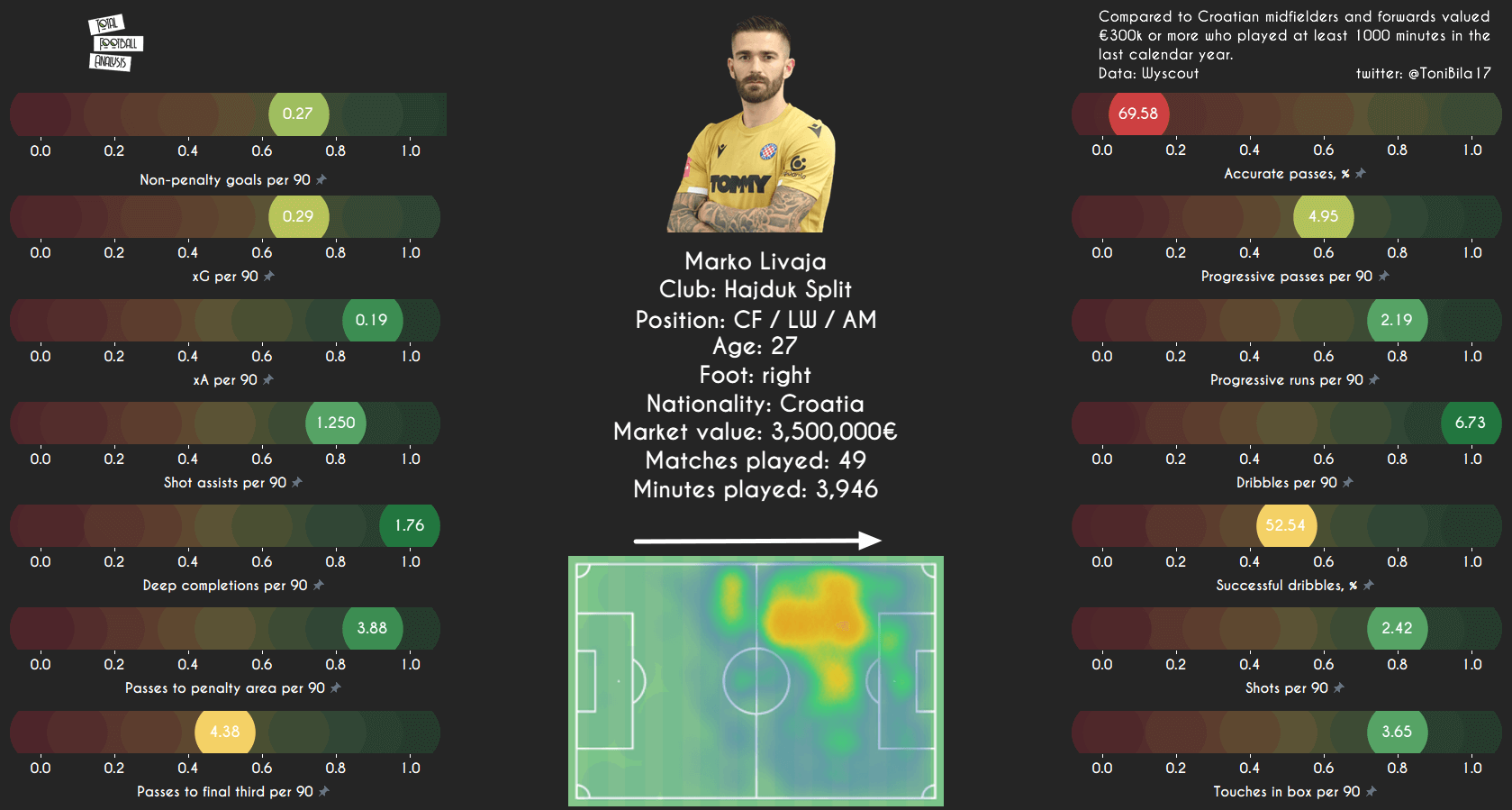 In the image above we can see how Livaja looks compared to the Croatian midfielders and forwards valued at €300k or above. Only players who played at least 1000 minutes in the last calendar year are taken into account. Just by looking at this visual, we can see that Livaja is performing very well in most of the metrics except for passing accuracy%. That information is crucial for this analysis because the Croatian team is filled with players who mostly average 85% and more passing accuracy which is a good sign of quality and secure passing, but Croatia lacks players who can break the defence regularly and who are willing to take risks more often.

As we can see, he performs highly in xA, deep completions(completed passes in or around the penalty area), passes to the penalty area and shot assists. Not only is he creative with his passes, but he also makes overloads in the final third with his dribbling and he is attempting 6.73 dribbles per 90.

Livaja is a very good goalscorer and he can finish promising situations which can be explained with his performance in shots, non-penalty goals, xG and touches in the box.

After a quick overview of his profile and looking at his qualities from a data perspective, in the next sections we will make a detailed analysis of his creative skillset.

Unlocking defences in a low block

In this section, we will see the two situations in which Livaja usually makes problems for the opponents who are in the defensive phase and defending in numbers. 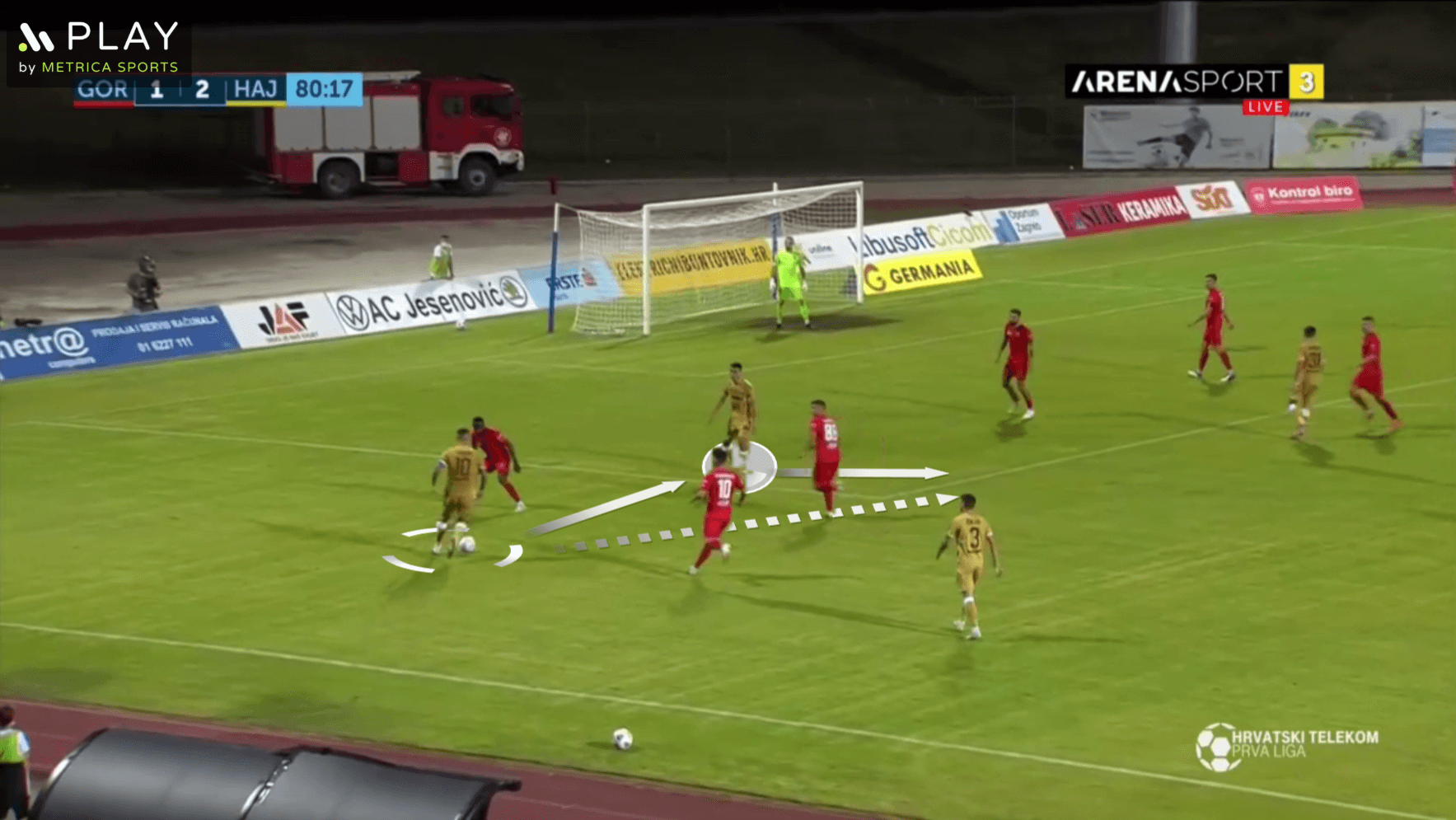 Even though he plays as an attacking midfielder, Livaja likes to roam around the opposition half and often drifts to the left side from where he can cut inside onto his stronger foot. His decision making in the final third is on a high level because he makes fantastic decisions about when to opt for a dribble, shot or pass.

In this particular situation, we can see how he draws the attention of multiple players which opens the space for his teammates who are aware of his vision and ability to facilitate for them. Livaja makes a pass into his teammate’s feet and continues his run between the players to be available to receive the ball on the edge of the box.

Livaja’s decision to make a pass towards the teammate who can receive the ball in a dangerous area rather than dribbling through three players is something that separates him from the classic wingers who look to make an impact mostly by attempting dribbles even when there are better options. After receiving the ball back, he is in a position to shoot or pass the ball further in the penalty area, but the most important thing is that he made a quality situation for himself with a simple pass and move action.

The next example is about Livaja’s ability to find runners in behind with perfect precision and timing. 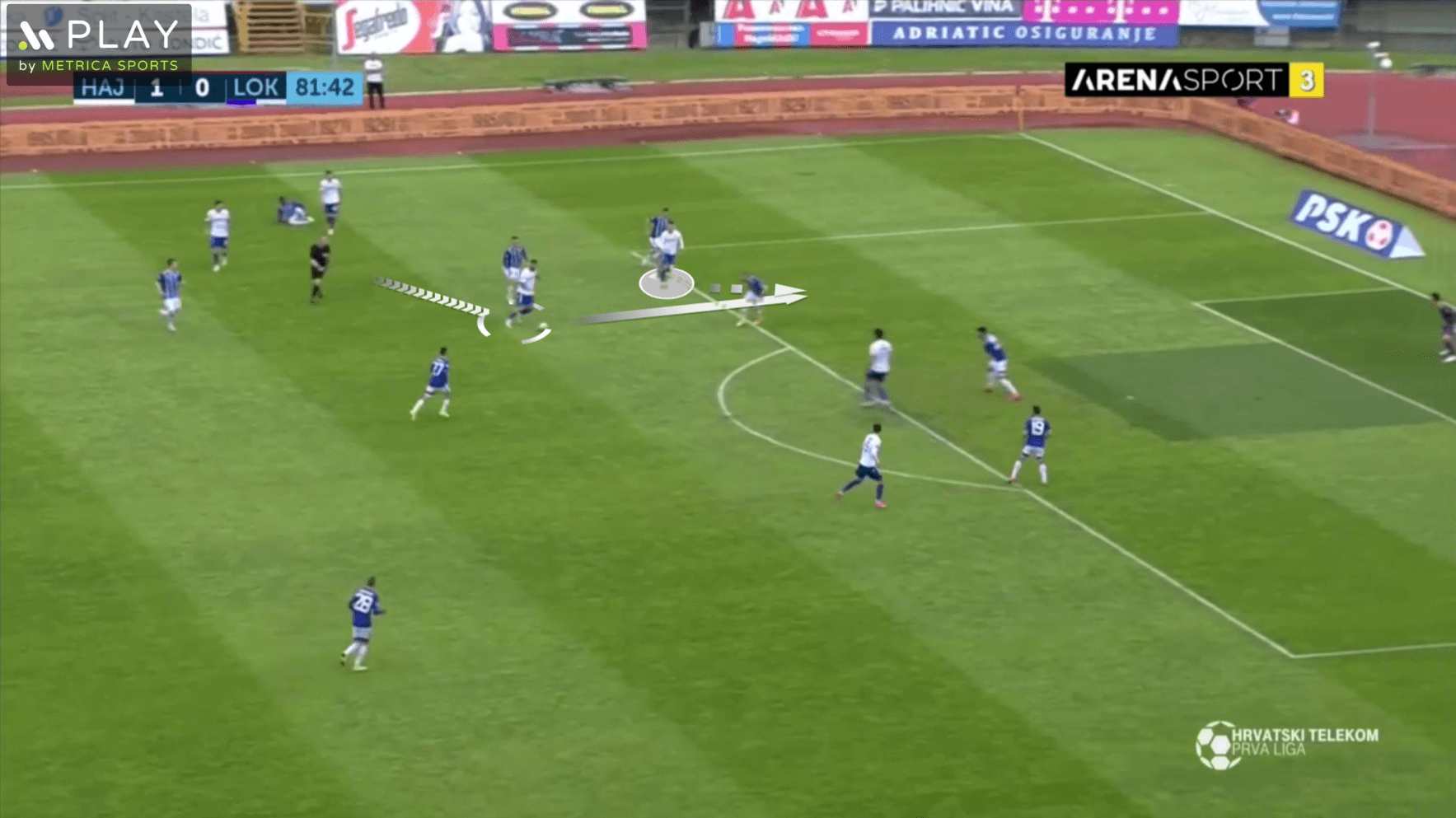 In this situation, Livaja managed to cut inside with the ball with a player on his back. He didn’t take a clear look at the teammate making a run between centre-back and full-back and he attempted a defence breaking pass at the right time which put his teammate into a goalscoring opportunity. His ability to make perfectly weighted passes in tight areas is impressive. Of course, he had the time & space to make a pass towards the centre-forward who is positioned with his back towards the goal, but that wouldn’t put him into a goalscoring opportunity and Livaja has enough self-confidence to believe he can make “high risk & high reward” actions. 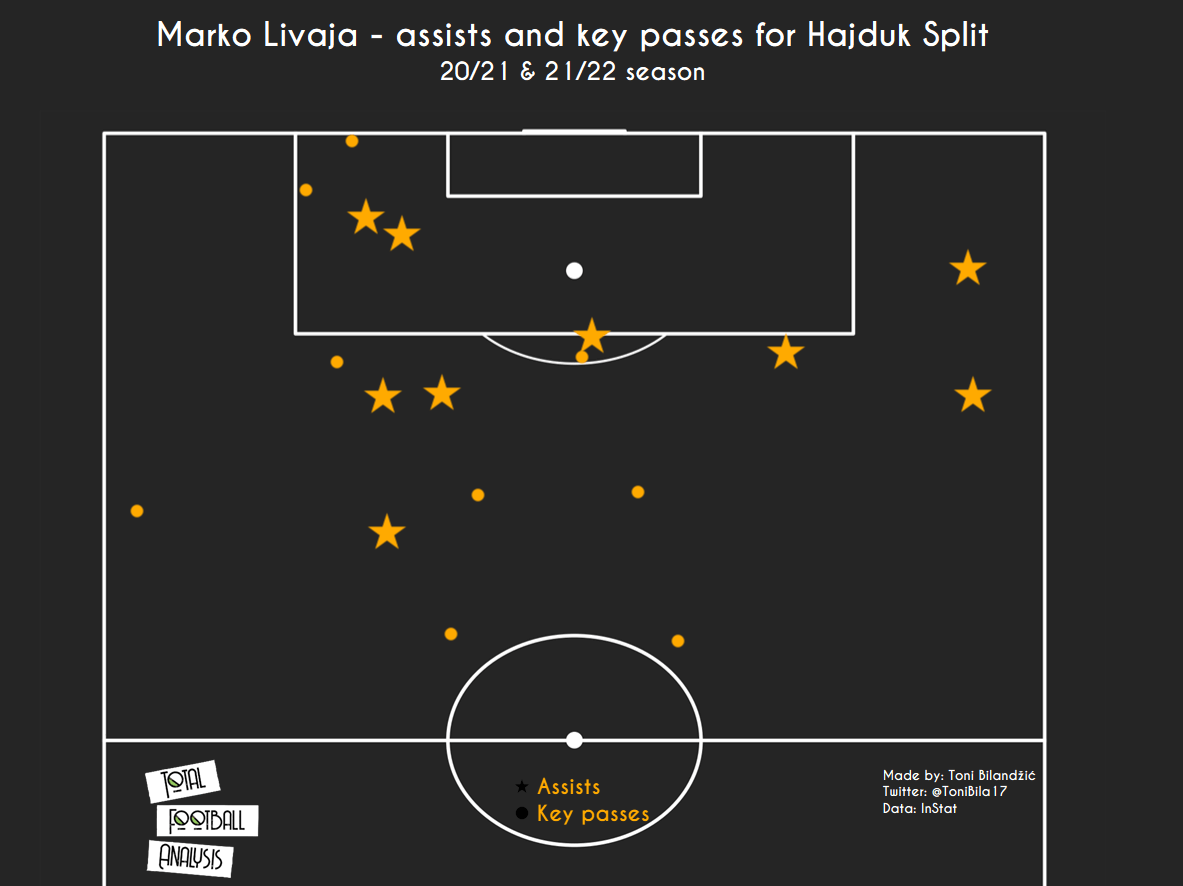 In the visual above we can see the positions where Livaja made his assists and key passes. It fits the profile that he has a free role at Hajduk and can make an impact from all over the pitch. Livaja doesn’t need too much space to make an impact and this visual confirms that. The next section will be about his creation in transitions.

The difference-maker in attacking transitions

Livaja doesn’t have too much defensive responsibility in Hajduk because they need him to do the heavy lifting in the attack. That allows Livaja to position himself between the lines to receive the ball when his team regains possession. 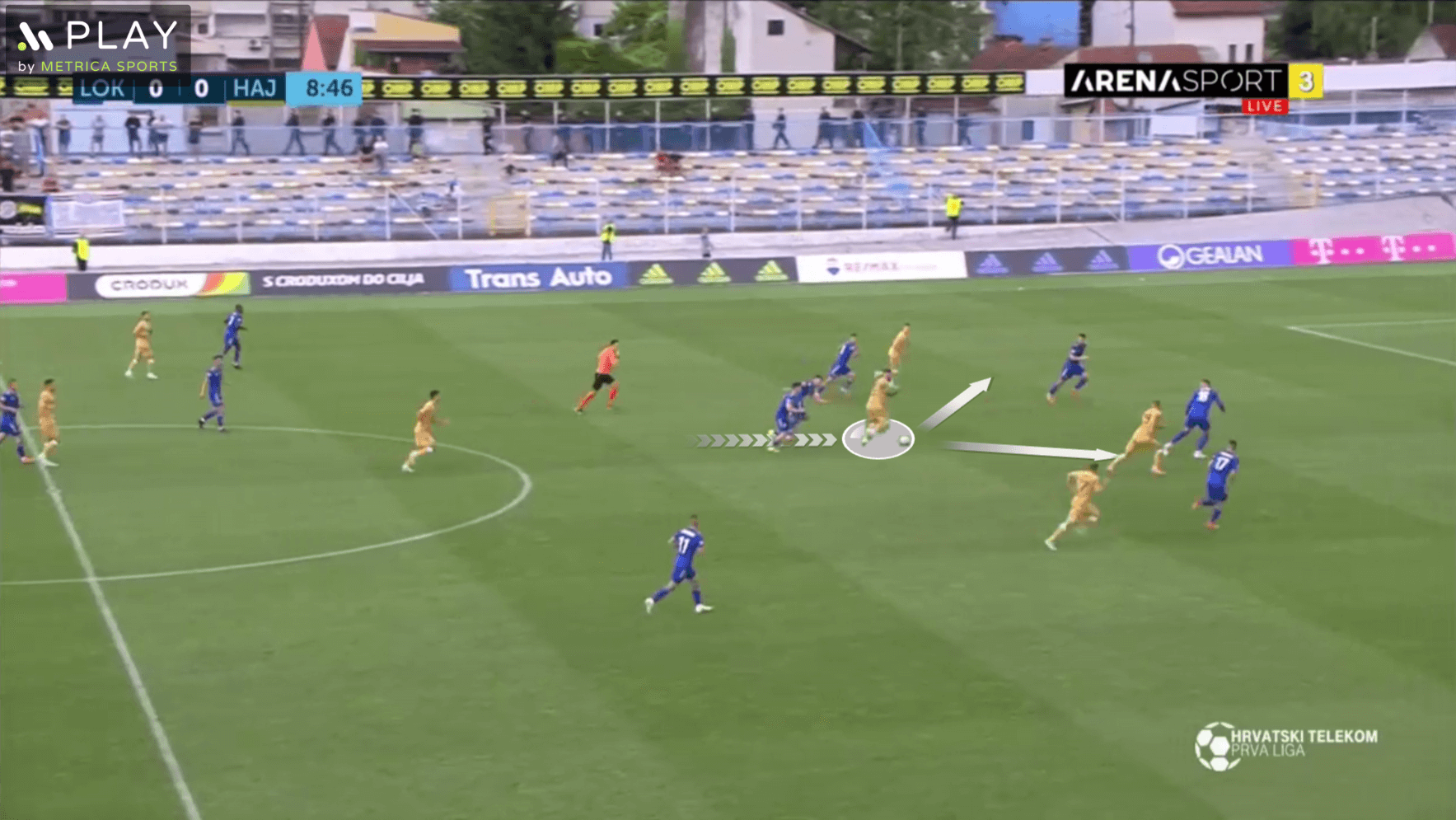 Livaja is hard to stop in transitions because of his impressive body balance and strength combined with good pace and ball control. In this situation, he dribbles through two opposition players and runs directly at defence with three teammates making runs towards the opposition goal. He isn’t making a final pass instantly but rather chooses the right moment to attempt a pass. Livaja rarely makes wrong decisions as a ball carrier in transitions where they have a number advantage.

The next image will show us a situation where Livaja is making a run in the counter-attack to be available as a passing option in the final third. 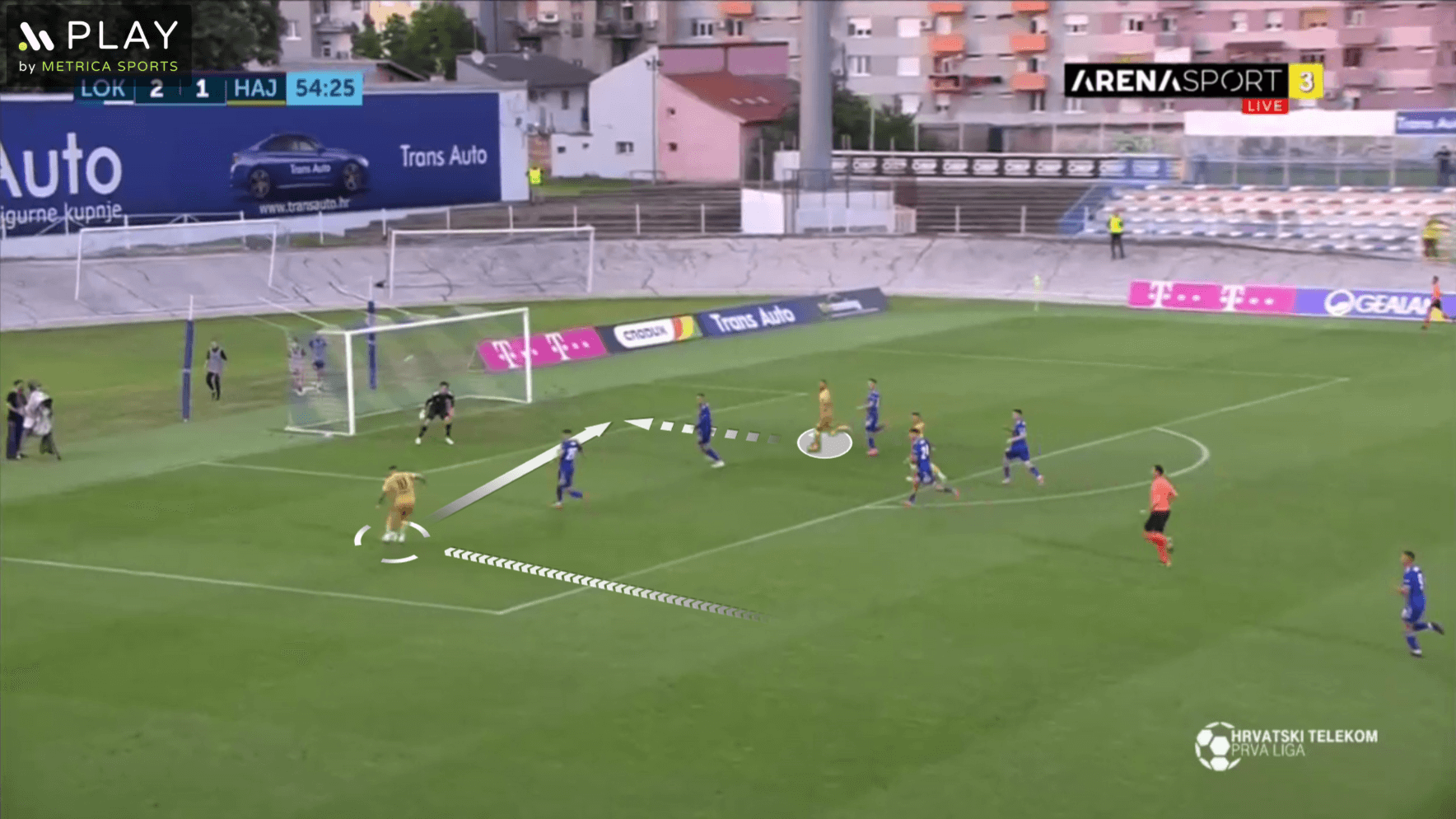 His team regained possession and Livaja instantly started spreading the defence by running inside out to receive a through ball. Even though Hajduk is in a 3v5 situation, Livaja has the quality to find his teammate in the 6-yard box with a ground pass for a tap-in. Livaja is capable of making outstanding actions with both feet which makes him even more difficult to mark in the final third.

Livaja is very direct when it comes to offensive transition and it is something where Croatia has potential given the players like Vlašić, Oršić and Perišić who can be deadly in counter-attacks.

Where could he be used in Croatia?

For the September matches, Dalić decided to shuffle things a little and send forwards Ante Rebić, Bruno Petković and Josip Brekalo, who didn’t perform well for Croatia in recent matches, on cooling break. Milan Badelj, Domagoj Bradarić, Šime Vrsaljko and Lovre Kalinić also weren’t called for September’s matches. That opened a space for in-form players Marko Livaja, Antonio-Mirko Čolak and Borna Sosa. Ivica Ivušić, Nikola Moro and Filip Uremović are the other new names compared to the EURO 2020 squad. Given the fact that Dalić didn’t change the system a lot since his appointment, we will first try and explain where Livaja could fit into his preferred 4-2-3-1 system. 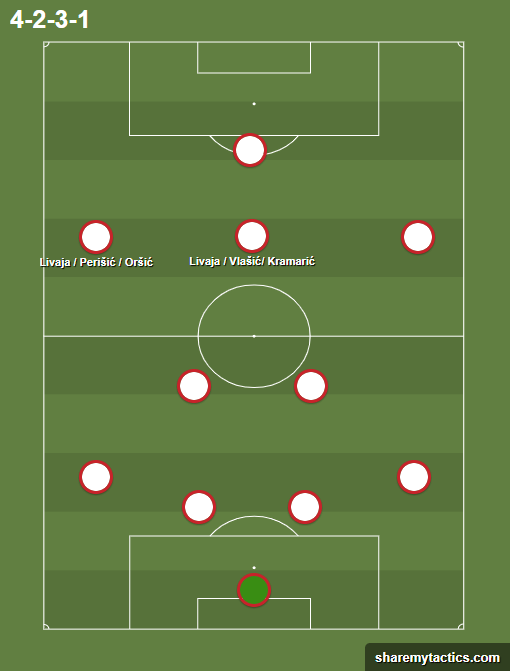 In this formation, there are multiple players available to play on the left wing. Perišić and Oršić were mostly used there, but Luka Ivanušec is capable of playing there as well because of his versatility. Putting Livaja on the left wing would look good from a creative standpoint because there is a space for Vlašić at attacking midfielder meaning there could be two creative players close to the opponent’s goal.

On the other hand, it would unsettle Perišić, who is Croatia’s most consistent player, as he wouldn’t be able to play in his natural position, meaning he would end up playing on the right wing which he can play but not as effectively as his natural left side. Ivanušec is the only player in the squad who regularly plays at right-wing.

The second option would be to put Livaja as an attacking midfielder, which would then keep Perišić on the left wing while making the right wing available for Ivanušec. Dalić had tendencies to put Kramarić or Vlašić on the right wing, but they look much better in central roles and it doesn’t bring much to Croatia, especially when Kramarić plays wide. With Vlašić or Ivanušec on the right wing, Croatia would have creative players along with Livaja just like in the first option.

Something that is often commented on is that Croatia has a squad that perfectly fits into three-man defence tactics. 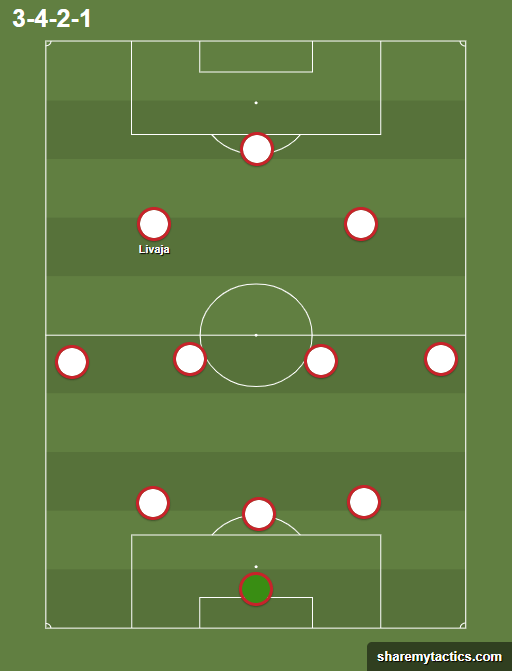 This formation leads us to Livaja playing as one of the narrow wingers or two attacking midfielders. Sosa would be a perfect fit at left wing-back because of his quality runs forward to join the attack. Livaja’s ability to draw attention to him before making a pass would make a lot of space for Sosa to deliver crosses into the penalty area. Perišić is also capable of playing at left wing-back because last season he played in that position a lot.

Next to Livaja, except for the aforementioned Kramarić and Vlašić, we can visualise Mario Pašalić as a perfect fit. Pašalić plays that role for Atalanta and his skill set would complement Livaja’s playing style because Pašalić does a lot of work with his off the ball movement and smart runs. Croatia has a squad filled with talented players which makes it hard to decide who to play and in which role.

There are a lot of possibilities regarding where Marko Livaja could fit and it will be interesting to see what his role will be on his return. Of course, maybe he won’t get a lot of chances to play since he is a returnee to the national team and there are players who are playing on a higher stage, but given the performances that he has produced lately, he could be a solution for Croatia’s lack of risk-taking and creative attempts in the final third. Everything will be revealed on 1st September when Croatia faces Russia in their pursuit for a place in World Cup 2022.