Gameweek one of the UEFA Champions League saw Bayern Munich host Atlético Madrid. Before the match, there was lots of discussion about the tactics of both sides, particularly their defensive tactics, with many excited to see the Bayern Munich high block against the Atlético Madrid block which is far less aggressive than Bayern’s block, in the opposition defensive third. Bayern are also the defending champions, beating PSG 1-0, courtesy of a Kingsley Coman header.

Notably, Marc Roca, Luis Suarez and Lucas Torriera were able to make their Champions League debuts for their new sides. Atletico lost Thomas Partey to Arsenal and this will have come as a blow for Simeone’s side as he looked to nullify the Bayern attacking threat.

This tactical analysis will provide video analysis, with the additional use of statistics, to analyse the tactics of both sides and particular events in the game. As Bayern won 4-0 against Atlético, though, Atlético made it much harder for Bayern than it might sound. 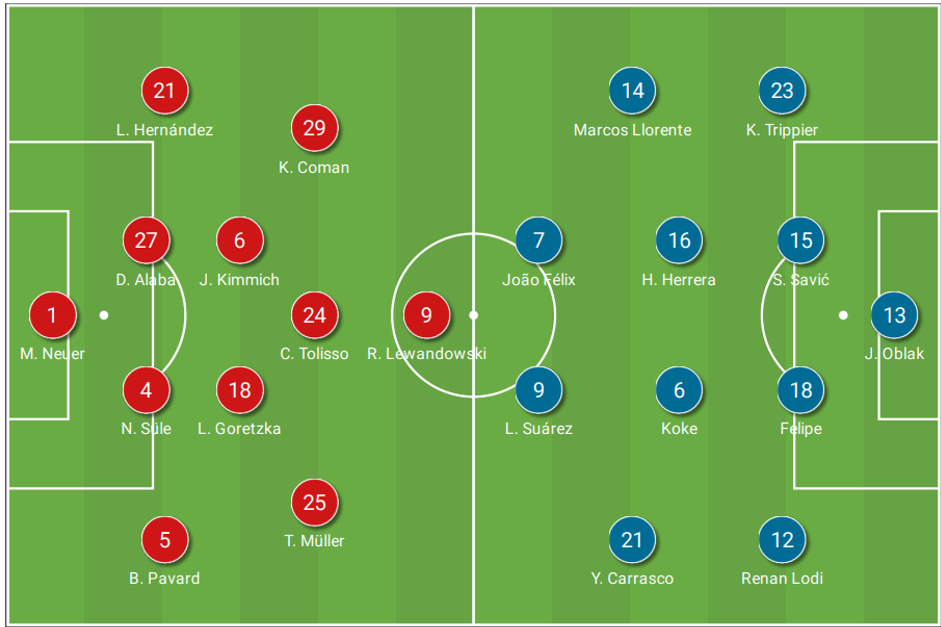 The hosts lined up in their standard 4-2-3-1 formation, Lucas Hernandez kept his place at left-back with Golden Boy nominee Alfonso Davies left on the bench. Joshua Kimmich replaced Serge Gnabry as the German winger, unfortunately, tested for positive for COVID-19, with Corentin Tolisso pushing up into the central attacking midfield role and Thomas Muller moving out wide into Gnabry’s position. Winger Leroy Sane missed out due to injury.

Diego Simeone made six changed to the side that beat Celta Vigo 2-0 away at the weekend. Renan Lodi and Felipe replaced Manuel Sánchez and Mario Hermoso on the left-hand side of defence. Marcos Llorente and Yannick Carrasco were rested at the weekend and came back in the side and Hector Herrera replaced new signing Torriera in central midfield. Joao Felix was the last change as he came in for Diego Costa.

Atlético are known for their stubborn defensive base and although the scoreline might suggest otherwise, they frustrated Bayern for much of the game. Bayern only had an expected goal value of 1.70, compared to the four goals that they scored. Bayern averaged 61% possession as Atlético were happy to allow Bayern to have possession of the ball as they attempted to frustrate them before countering on any passing mistakes.

The block applied by Atlético in the Bayern half was effective in forcing Bayern backwards. They allowed 18.90 passes per defensive action (PPDA) in the first half and this allowed Bayern to control most of the first half. Atletico went for the game a lot more in the second half, as they only allowed 8.7 PPDA, as they were much more aggressive and compact to win the ball high up the pitch. I will go through an example of their block in the Bayern half.

Goretzka passed to Hernandez and this triggered Llorente to press Hernandez. The ball holder was usually pressed quickly by the Atlético man closest to him. Strikers, Joao Felix and Suarez look to occupy positions that can cut the potential passing lanes to other Bayern players, the arrows show the passing lanes that their positioning allowed them to cover.

Llorente’s body shape forced Hernandez to play a deep pass to Kimmich, rather than one to Kimmich’s original position. Koke is then able to press his opposite number from his blindside and all of the potential passing lanes are cut off. Had Koke been closer to Kimmich it may have led to a quicker turnover in possession to Atlético. Though, note that Tolisso also had to be watched by Koke.

This forced Kimmich into a longer pass(dotted arrow), this reached Coman, however, as you will see, it led to an eventual turnover in possession.

Coman is under pressure straight away in his blind side, making it very difficult for him to turn to see forward pass lanes, without being tackled. He is forced to dribble backwards before he passed to Kimmich. Koke moved away from Kimmich when he passed it so he could position in the more forward passing lane to Goretzka.

Kimmich attempted a forward pass between the lines to break the block. This was intercepted by Herrera.

This is just one example of how Atletico attempted blindside pressing of the ball holder to force backwards and lateral passes. If forward passes were attempted by Bayern they had to be very special to beat the block as Atlético covered most short pass passing lanes, how Bayern beat the block is spoken about next.

Bayern were forced into the following passing lanes shown below, sometimes including Manuel Neuer. 67% of Bayern’s passes were backwards or lateral, only 52% of Atlético’s were this type, though, Bayern’s high possession should be taken into account.

The Atlético wide midfielders would tuck in to stop any inside passes and their positioning meant that a wide pass from Bayern full-back to winger could risky as the Atletico players were near the passing lane and the Atletico full-backs would then press aggressively from the blindside if the Bayern wingers received the ball.

The first goal came from a brilliantly executed progressive pass from Kimmich. Bayern were most threatening when they looked for a more direct transition from midfield to attack as they attempted longer passes behind the Atlético defence or between the lines of the defence and midfield. As short passes transitions would have been a very difficult way to break the Atlético stubborn block.

Kimmich displayed brilliant vision and technical ability to find Coman, the Frenchman’s lovely first touch allowed him to score with ease. The positions near the half spaces in the 18-yard box were where Bayern scored their first two goals and was a problem for the Atlético full-backs as they couldn’t beat the Bayern players (Coman and then Goretzka) to the ball.

Bayern pressed with the standard high block that we have come accustomed to with this Bayern team. They allowed 12.4 PPDA, they were the opposite to Atlético as they only allowed 9.8 PPDA in the first half, they were quick out of the blocks which helped them gain their lead before half time. The attacking midfielder, Tolisso, or at some points, Muller, would join Robert Lewandowski by pushing up onto the Atlético Madrid centre-backs.

Kingsley Coman and Muller(though sometimes Tolisso would drop into right midfield when Muller helped press with Lewandowski), would look to block the forward passing lanes for the full-backs, either wide to the winger or inside to the central midfielder. Though, the passing lane to the winger was covered with more intent as the two Bayern pivots would match up with the Atlético pivots.

Kimmich and Leon Goretzka would stay on the blind side of Herrera and Koke to force the Atlético players into making a pass they would not want to make as Bayern were able to apply this high block in the Atlético half so that Atlético found it very difficult to transition through the block without being impeded.

Below is an example of the high Bayern block and how it forced Atlético into mistakes and a regain in possession for Bayern. The Bayern block was as good as the Atletico block in terms of preventing forward passes.

This instance Muller pressed in a 4-4-2 partnered by Lewandowski.

As Muller got closer to Stefan Savic, Savic is forced into a decision. He can either pass backwards to Jan Oblak, or he can look to pass forwards.

Lewandowski and Goretzka are near Atlético players, Goretzka ready to press at the blindside of his opposite number pivot if the pass by Savic is central. Coman is positioned to block the low pass option to the Atlético wide area.

Coman’s positioning forced Savic into a lobbed pass to Kieran Trippier (off the screen) as a low pass could have been intercepted by Coman as he shuffled wider. The lobbed pass which went out of play, so a return in Bayern Possession.

Atlético didn’t create much, however, they did create some really good chances and will feel unlucky not to have scored at least one goal. They were particularly threatening on the left-hand side of the pitch as Renan Lodi, Joao Felix and Carrasco caused Benjamin Pavard and Nikolas Sule some problems. 17 of Atlético’s attacks came from this side and 0.25 xG also came from this side. They were expected to score 0.70 goals throughout the match.

If readers watched the game they will remember the two chances for Carrasco in either half and Suarez’s shot from a cutback in the first half as Atlético’s best chances of the game. Their attacks came from a number of different situations such as recoveries in the Bayern half, counter attacks and from longer passes forced by Bayern which in turn played to Atlético’s advantage as they were tenacious and aggressive in winning loose balls.

I will analyse how Atlético threatened the Bayern goal on the final third left-hand side of the pitch.

Above shows, the three mentioned earlier, with Lodi in possession and Carrasco and Felix in the half space. A transition short pass triangle transition including the overlapping Koke (coming into the screen), creates space for the key pass to happen. 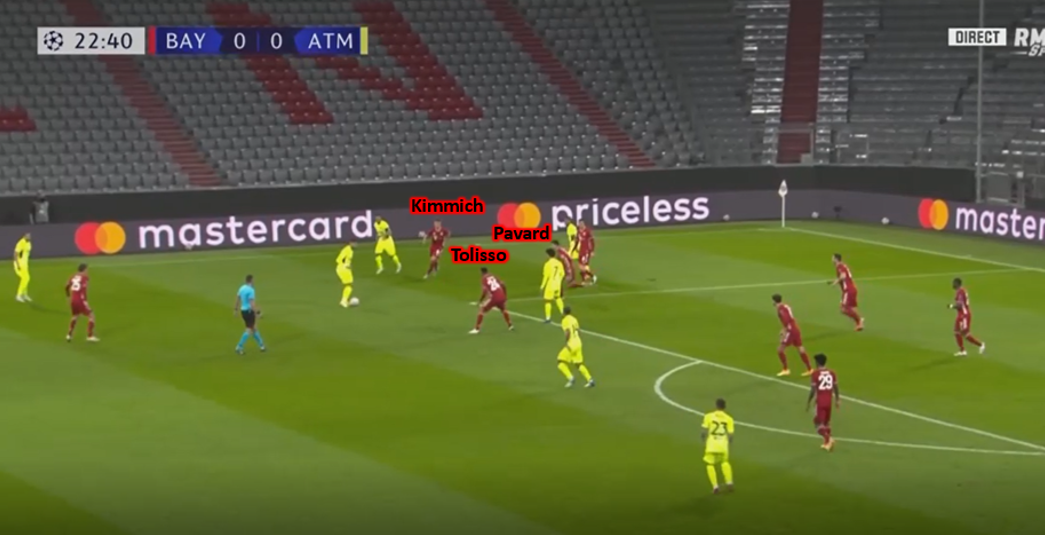 Kimmich is pulled out of position and Joao Felix’s positioning in the half space caused confusion between Tolisso and Pavard as neither knew whether to press Carrasco, who is in ball possession, cover Joao Felix or if Tolisso should cover the lateral pass across the field. In hindsight, the Bayern defensive line could have pushed higher so that Sule could have pressed Joao Felix from the blindside.

Carrasco and Felix are able to create a two vs one situation in a space within the half space to transition around Pavard, who pressed Carrasco. This allowed Felix to play a pass behind the Bayern defence which resulted in a Carrasco shot at goal from the transition.

Another threatening moment again from an exchange from Felix and Carrasco, Felix was one of Atlético’s brightest attacking threat and will be disappointed his teammates weren’t able to score from the chances that he created. A counter attack and progressive run by Joao Felix created the Carrasco chance below that had a xG value of 0.24.

Carrasco could have either taken a first time shot with Neuer out of the centre of the goal and a pass to the back post where there was an overload was a potential option. Carrasco took a touch, however, his next touch allowed Sule to get back into position and block the resulting shot. He would have been better off taking one or zero touches before shooting or passing to the back post. However, hindsight is a beautiful thing and he did well to get into the goalscoring chances.

Bayern were deserved winners in the end and their quality in possession won them the match against a strong Atlético side. This tactical analysis looked at how both sides pressed, Bayern’s brilliance in final third passing, particularly in progressive passes in the final third and Atletico’s threat from the left-hand side.

Bayern host Eintracht Frankfurt before going to Russia to face Lokomotiv Moscow, who did well at holding Red Bull Salzburg to a 2-2 draw. Atlético face a tough fixture at home to Real Betis before hosting Red Bull Salzburg next week in a game that Simeone will want to win so that Atlético can take advantage of any slip-ups that Bayern may have, as he will hope to get the potentially more favourable top spot in the group.