The Champions League group stages threw up another interesting battle between a rejuvenated Valencia side who are continuing on the right track, showing positive growth away from the dark days of a few years ago. They hosted a creative Ajax side who, despite their summer transfer activity are unbeaten in the Eredivise and still playing an attractive, attacking brand of football.

In this tactical analysis, we look at how each team’s tactics collided and provide an analysis of how Ajax eventually came out worthy winners, taking a 3-0 victory away from a raucous Mestalla.

Newly appointed Albert Celades continued with the status quo as he attempts to understand his new squad better. He opted for a straight 4-4-2, a shape Valencia have used 96% of the time this season. A host of injury troubles saw Geoffrey Kondogbia, Kevin Gameiro and Carlos Soler all absent from the starting XI. Instead, Rodrigo partnered talisman Maxi Gómez upfront, supported by Ferrán Torres and Gonçalo Guedes from the wide spaces. Dani Parejo and Francis Coquelin operated as the centre-midfield pairing, providing shape and stability to the system.

The visitors also started in their usual formation, a fluid 4-2-3-1, spearheaded by Dušan Tadić. Quincy Promes and Hakim Ziyech provided the width and supported the frontman with penetrative runs inside their respective full-backs. The impressive Donny Van de Beek operated in the number 10 role, linking the midfield cohesively with the attacking unit. Lisandro Martínez and Edson Álvarez were deployed as the double pivot; they played a large role in developing attacks from the back as we’ll see later.

Valencia operated a robust 4-4-2 system. In possession, both central midfielders were defensive-minded which gave license to the full-backs and the wingers to get forward. Their build-up play centred around their centre-backs linking with the central midfielders, who stayed very narrow. From this point in their build-up phase, the wingers also became narrower – as we can see above – which opened up passing lanes to the full-backs higher up the pitch.

You can see above how narrow Valencia’s shape was. Daniel Wass’ average position was infield in the half-space along with Torres who also sat inside. This allowed quick, sharp interchanges to be made between players once Valencia found passing lanes into one of their strikers. From this position, Valencia could hold possession higher up the pitch and look to build penetrative attacking situations.

Defensively, the home side’s narrow positioning allowed them to create a resilient lower block to combat the fluidity of Ajax’s movement. Once possession was recovered, Valencia sought to punish Ajax’s aggressive approach by transitioning quickly up the field. Unfortunately for Los Ches, they were wasteful when key chances presented themselves and were unable to get themselves on the scoresheet.

Ajax’s tactics were attacking and fluid. As you can see above, they pushed their full-backs extremely high and wide in an attempt to stretch the rigid 4-4-2 formation of their opponents. The average position of Sergiño Dest is that of what you’d expect a winger’s to look like. The full-backs positioning allowed Ziyech and Promes to drift inside and make runs into the half-spaces, which tormented Valencia’s back four. Valencia’s full-backs were often left isolated and forced to either cover runs inside them or move out to press the advancing Ajax full-backs. Eventually, this dominance prevailed as Ajax took the lead with a stunning Ziyech curler from outside the box.

Out of possession, Ajax operated a trademark man-to-man pressing system. This, however, was not as aggressive as what you often see from an Erik ten Hag side, as their PPDA was just 11.97, significantly less aggressive than their season’s average of 7.14. Despite toning down the aggression, Ajax still pressed Valencia, just not as high up the pitch. 46% of their recoveries came in the middle third of the pitch as the visitors attempted to lure their opponents forward before striking with an organised, unified press.

The suffocation of their opponents saw Ajax take a 2-0 lead into the break, after Valencia missed a host of chances, achieving an xG of 1.8 with no reward. Below we look at the tactics that turned the game in favour of the visitors.

As mentioned, Ajax played a forward-thinking, progressive passing game. The pass map shows very few passes that have gone backwards or sideways, as every player was looking to play forward. This ability to dominate the ball and pass their way through the phases hinged on the use of their dynamic double pivot.

Rather than come to collect the ball from the central defender as you’d see in a typical double pivot, Ajax did something different. Álvarez and Martínez didn’t operate in a symmetrical system, standing square of each other, instead, they played asymmetrically. In possession, Álvarez dropped deeper to play as a third centre-back, whilst Martínez occupied the space vacated by Álvarez. This led to the positioning below.

By creating this diamond in the first phase of their attack, Ajax could easily pass through the square formation of Valencia and build through each phase of the pitch. Valencia rarely pressed as a unit in search of possession, which made it easy for the Ajax double pivot to pass into the full-backs or the inside forwards. Along with the diamond creating passing options it also distorted their opponent’s defensive shape.

As the diamond formed, Valencia tried to prevent the first pass into midfield, which was often the starting pint for Ajax’s build-up play. By moving out of the midfield line, the Valencia midfielder left a large space behind him, which was exploited by Van de Beek, who is an expert at identifying these gaps. This simple diamond created by a dynamic double-pivot sliced through Valencia’s ranks, allowing the attacking players of Ajax to see plenty of the ball and create chances freely. The visitor’s had 12 shots at goal, with seven on target.

Despite the scoreline suggesting a mauling, the game wasn’t entirely dominated by Ajax. Valencia had big chances in the game which they were able to create by exploiting the weaknesses in Ajax’s aggressive formation, which we look at below.

The first area where Valencia failed to punish Ajax was in offensive transition. With the visitors enjoying spells of possession – averaging 20.29 passes per minute –  the home side had opportunities to counter from a low block.

52% of Valencia’s recoveries occurred in their defensive third of the pitch. From their narrow positioning, counter-attacking opportunities naturally arose. The compactness of their midfielders when defending was an excellent platform in offensive transition as quick interchanges were able to be played into the spaces as they broke. As you can see above, when Valencia recovered possession from deep they had a high concentration of players in the recovery area, which they used to spring into attack. 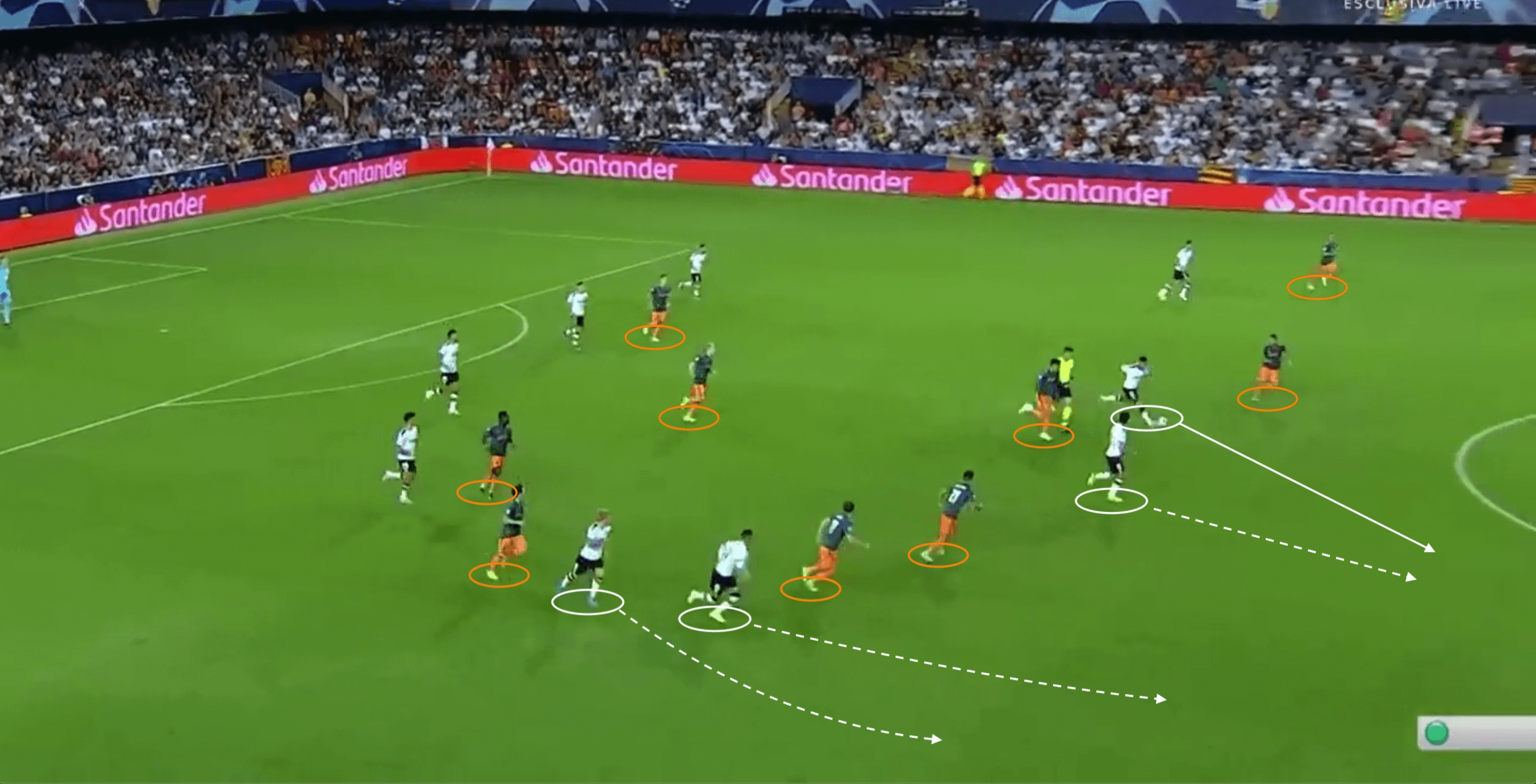 After quick interchanges, Valencia played passes into the large spaces vacated by the attacking Ajax side. As you can see, after a couple of clever passes in Valencia’s midfield, Ajax had nine players the wrong side of the ball.

As the play developed, Valencia raced into the empty space as their clinical counter-attacks advanced them quickly into goal-scoring areas. Unfortunately for the home fans, Valencia lacked the quality in their final pass or shot and were unable to properly punish the space gifted to them in transition.

Another area where the home side were able to create chances was from the lack of defensive support Ajax provided in the wide areas. This was as a direct result of their use of the double pivot as we discussed above. This section shows the negative aspects of the attack-minded pivot, identifying the weaknesses and vulnerabilities.

As Valencia progressed their attacking build-up play, their attacks became most dangerous once the ball entered the lateral spaces. Often in a 4-2-3-1 system, when the opposition has the ball on the wings, the full-back, winger and centre-midfielder come across to create a 3v2 situation. This prevents overloads from occurring as there is numerical superiority for the defensive side.

Ajax didn’t implement this. When Valencia moved the ball wide there was often not enough defensive cover, which left the full-back isolated and exposed. In the situation above, neither the winger or the centre-midfielder is in the correct position to assist the full-back. As a result, a simple wall pass is played between the Valencia attackers which penetrates the Ajax defence.

This situation kept occurring for Valencia throughout the match. A 2v2 in the wide spaces often favours the attacking team due to the reactive nature of defending. In these situations a defender must contain the space as opposed to closing down the winger, otherwise, they will be vulnerable as the first picture demonstrated.

To prevent this Ajax needed to move one of their midfielders across in support to make a 3v2. As mentioned this often didn’t happen because of the attack mindedness of the midfield pairing.

Eventually, the space afforded to the home side led to some big opportunities. This time from the 2v2 scenario, a good cross is played in -unchallenged- which is met by a Valencia striker. However, Los Ches were again not clinical enough to punish the opportunities that arose from their tactical superiority in the wide spaces.

A solid 3-0 victory will satisfy the Dutch side as they now take control at the top of the group. Their free-flowing, expansive football is a joy to watch as they effortlessly create chances against almost every opponent. It’s not without risk however, as we’ve seen, there are vulnerabilities to this Ajax side, which against more clinical opposition will see their full-throttle tactics punished.

On paper, this looks like a bad defeat for Valencia, in reality, the scoreline slightly flattered their opponents. Scoring the penalty to make it 1-1 would have certainly led to a closer final result. After failing to build on a victory against Chelsea on matchday one, the Spaniards will be keen to continue their challenge in a competitive group. They’ll look at the opportunities they’ve created and feel they have a real chance to progress through to the knockout stages. The question is whether they can keep goals out at the other end.