He knew all his gestures were going to be watched and dissected, and his first result highly anticipated. At 41, Thierry Henry began his new coaching career on the bench of AS Monaco with a bad night. It included a goalkeeping blunder, a major injured player, another ruled out and a defeat to boot.

Monaco lost 2-1 to Strasbourg on matchday 10 of Ligue 1 on Saturday 20 October. As a result, they continued their fall down the table to 19th in the standings. The top scorer in the history of the French team has confirmed that his mission is complicated. He added that he would quickly find the right boosts to get his team out of the doldrums.

After Jardim’s regular 4-4-2, this team finally lined up in a hybrid system. They alternated between 4-4-2 and 4-3-3 at Henry’s request. Aleksandr Golovin was closer to Radamel Falcao and Stevan Jovetic shifted to the left. For 4-3-3 build-up phases, the Monegasque side had Benjamin Henrichs on the left and Djibril Sidibé on the right. The pair were positioned very high, almost like wingers, with the definitive aim of forcing their Strasbourg counterparts back.

However forward players like Golovin and Jovetic were too wooden to bring danger to the Strasbourg defence. Subsequently, Monaco’s possession was too oriented towards width rather than depth. 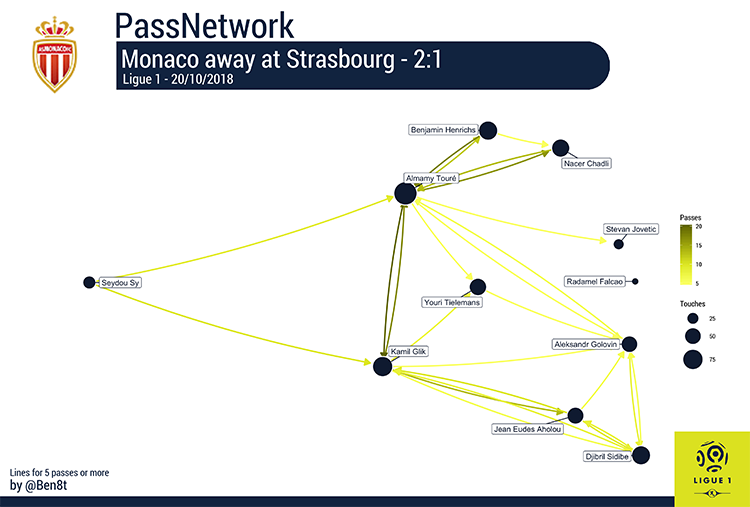 More surprisingly, midfielders Jean-Eudes Aholou and Nacer Chadli were off-centre when their team had the ball and found themselves behind. This left Youri Tielemans the responsibility of organizing everything in midfield. This offensive setup, whose structure was more common in a 4-4-2, nevertheless stumbled against Strasbourg’s block. They did not provide a single opportunity, although there was a threat from set pieces.

The Monegasques purred, spreading the ball without ever finding depth or combinations, either on the wings or in the middle. The blame lay on a flagrant lack of risk-taking and speed in transmissions. After losing possession they were particularly at danger in the channels, which were inevitably empty, as Alsatian counters regularly threatened.

However, it was individual mistakes that plagued Monaco. The risky positioning of Almamy Toure and a horrendous handling error from Seydou Sy lead to the opening goal.

For the second goal, we can feel that playing in a very high position opened some gaps for their opponents. Moreover, Monaco’s defenders are not the quickest in the league, which is problematic for Thierry Henry’s tactics. Others defensive players such as Henrichs, Sidibe and Tielemans are too far away to cover their teammates in central defence. 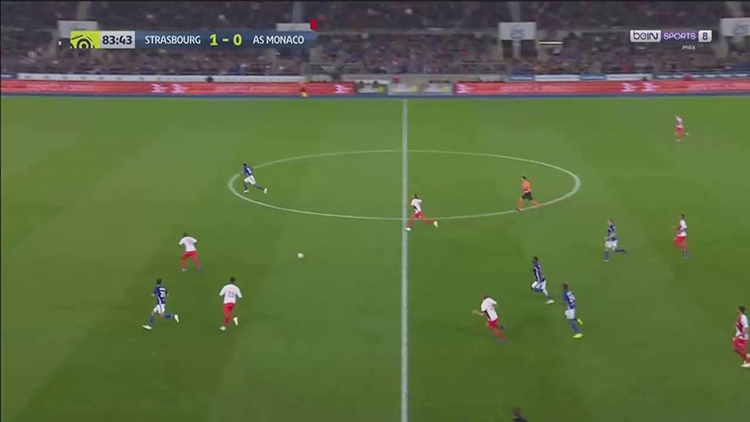 On top of this, circumstances didn’t help Henry. Falcao was injured, while Samuel Grandsir was sent off two minutes after coming on. Throughout the week, Henry insisted that he only had the chance to pass on concepts to his players in such a short period of time. At least he could see them partly applied, even if they did not necessarily pay off. We could see a high block, a possession game of waiting for the ball instead of going back into midfield.

This side is far from that of Kylian Mbappe, Fabinho, Bernardo Silva and Benjamin Mendy which lost against Juventus. The 2018 vintage is a little above average in Ligue Un terms.

The summer saw the arrival of Golovin, Chadli and Henrichs. More significantly, the departures of Moutinho – the master of the team – Lemar, Fabinho, Keita Balde and Ghezzal hurt them. As a consequence, results are not there. With only one win in 10 games, the hopes of Monaco are already non-existent.

At least it’s not so surprising. Monaco has a reputation for rather contrasting transfer dealings. Since the arrival of the Russian Dmitri Rybolovlev, Monaco has continued to sell the likes of James Rodriguez, Martial, Bernardo Silva, Mbappe, Lemar, Mendy for huge capital gains, and buy a mix of confirmed players and young talent the following transfer window to stay competitive in Ligue 1.

Unlike PSG, spending here is controlled to succeed in generating profits while remaining competitive. Periods like today are only temporary until the injection of funds.

More than a tactical scheme, Henry had explained the importance of freedom of movement when approaching the opponent’s goal. “How many times do you see a player go down and ask for the ball? It does not happen with Barcelona”, he explained on Sky Sports. “Stay in your position, believe in your teammates have the ball and wait for him.”

You start in a high position but then you can do what you want. In the last third of the field, Guardiola called it the three Ps: Play, Possession, and Position. And the most important was the position. You must stay in place, believe in your teammates who will send you the ball.

In training, to make players understand that, he laid out cones. Before the last third, the guys playing left could not go right and vice versa. But in the last third, players had freedom. The first time he took charge the team, he said: “My job is to get you into the last one, yours is to finish.”

With the sequence of matches, we will probably see an offensive AS Monaco 4-3-3 strongly inspired by what Guardiola does. With quality players like Tielemans and Golovin, these precepts can be well applied. However, it will be necessary to pay attention in defence where the lack of technical quality and speed can be fatal when you play in this way.