Benjamin Henrichs: How important is the youngster for Monaco?

Monaco is in a deep crisis at the moment losing seven, drawing three and winning only one of their 11 games in all competitions. Despite having a mix of young, talented players and experienced ones the team failed to find balance and couldn’t take advantage of its opportunities losing its last four games.

The club sacked the manager Leonardo Jardim earlier this week in pursuit of a better ranking as the team is third from bottom of France’s Ligue 1. Jardim was on charge since 2014 and brought back the winning feeling in Monaco. In the 2016–17 campaign, displaying attacking football performed by several young players he coached the club to its first national championship in 17 years.

Unluckily for the team a lot of these great players left for another clubs and Jardim was forced to look for new additions to the team.

That is how he found the 21-year-old Benjamin Henrichs. The youngster arrived in France this season and is already showing great abilities for his new club. But let’s see how he helps The Monegasques and is he and his teammates going to bring Monaco to the winning ways?

Henrichs is a complex player with a mix of defensive and attacking skills that could help any team in all areas of the pitch. In Monaco, he is mainly positioned on the left-back but he is often making runs on the flank so he can help his team offensively.

He is using his feet greatly and is very good at dribbling and tackling. He is often sending long balls and crosses and that’s how he contributes to the team’s performance best. He also has some nice off the ball moves too as he is always looking for a better positioning so he can help in the build-up. That doesn’t mean the 21-year-old is forgetting about his defensive responsibilities as he often finds himself covering some of his teammates during a defensive transition. His creativity level is high as he often delivers a great through passes which is also proof of his strong decision-making. 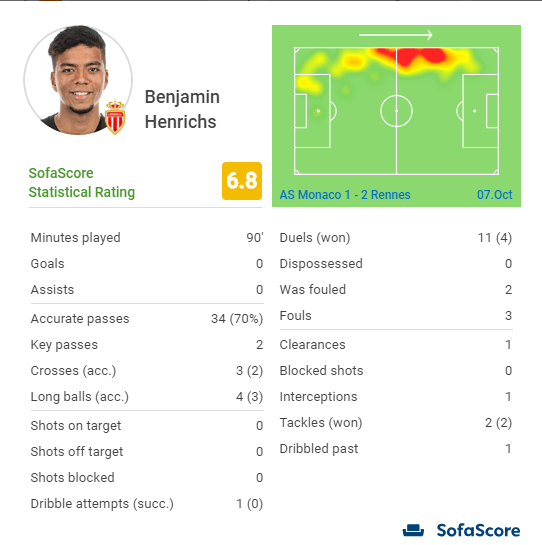 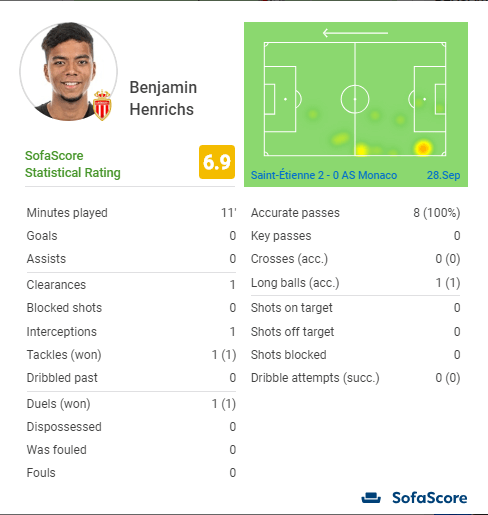 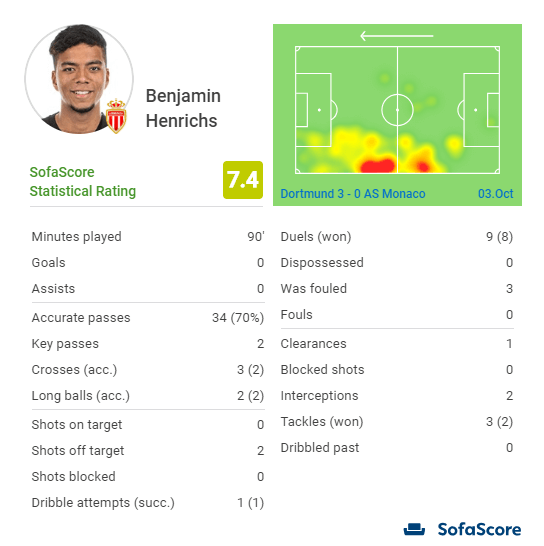 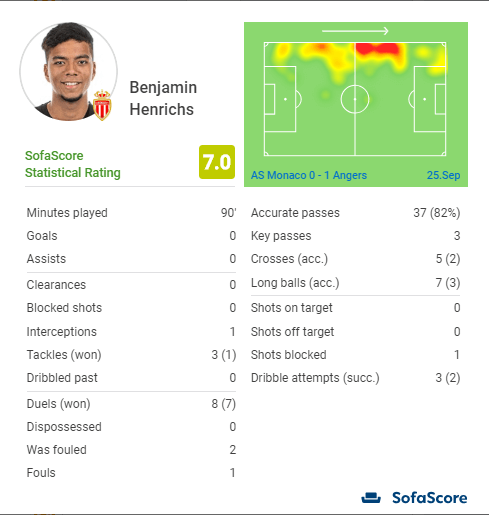 He showed some great result so far this season. He won 7/8 of his duels against Angers and dribbled successfully past his opponents on two occasions. He played only 11 minutes against Saint-Etienne but his stats clearly showed his impact – 1/1 tackles won, 1/1 duels won, 1/1 accurate long balls and a 100% passing accuracy. That’s a 100% of every indicator, how good is that? Then he made two key passes against Rennes and managed to send 2/3 accurate crosses and 3/ 4 long balls. His consistency is a one to be jealous of and it shows his contribution to the whole team’s style of play.

He often finds himself in the centre of the team’s actions as with his playmaking skills helps to the frontlines actively. His partnership with Aleksandr Golovin is often leaving the opponents helpless as their creativity and decision-making are hard to be set-down. 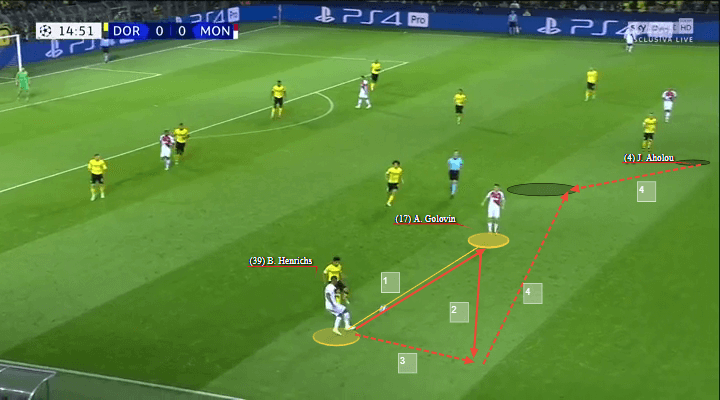 This is proof of his playmaking skills. He was under pressure and made a short-pass combination with Golovin so he can free himself of his marker. He then ran to the centre of the pitch where he met his teammate Aholou, passed him the ball and started his off the ball movement on the flank. 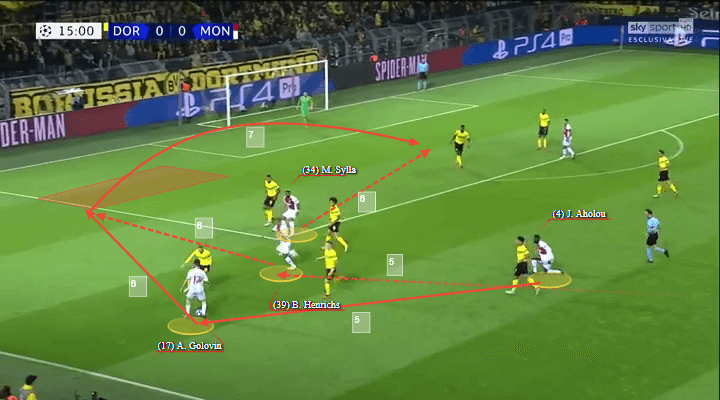 By the time Aholou was ready to pass, Henrichs and Golovin were already on the left. The Russian received the ball and during that time Benjamin reached the edge of the box so he can get it. Then he used the gap left by the defence to make a cross to Sylla who managed to get in front of the goal. This whole playmaking left Borussia’s defence confused and not able to react. 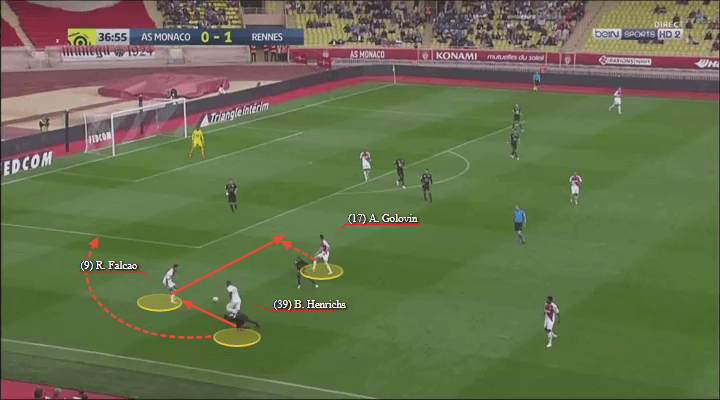 In here he made a recovery, passed the ball to Falcao and immediately started his off the ball movement to the edge of the box. Falcao made a short pass to Golovin who already knew what to do. 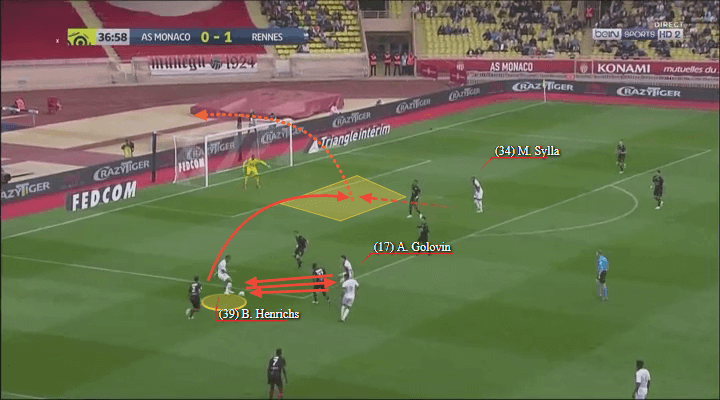 After a fast one-touch pass combination to confuse their markers, Henrichs received the ball and made a cross to Sylla who sneaked behind the defender’s back and shoot. The German averages three accurate crosses per 90 minutes and helps the team create chances like these all the time, despite his more of a defensive position. 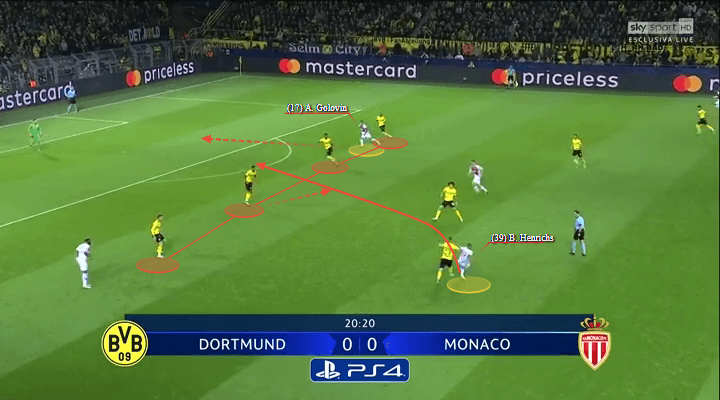 He was pressured and had to react quickly and pass the ball. Despite giving it back he found a solution in a through pass to Golovin between the otherwise perfectly positioned defenders. 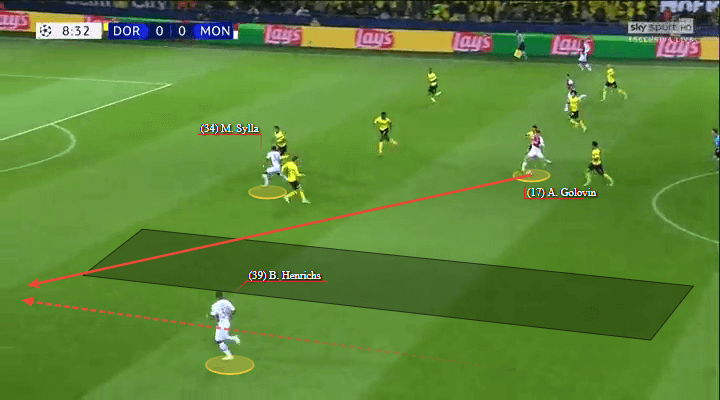 That’s another great combination between Henrichs and Golovin. The Russian noticed that Sylla is completely covered and was not available to receive the ball and so did Benjamin who used the uncovered area to position himself well enough to receive it. 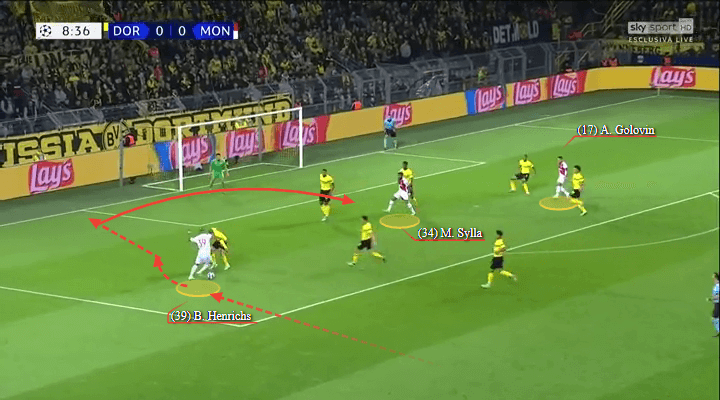 As a result of his off the ball movement, he was able to get the ball, dribble past his opponent and make a cross to Sylla who by that time has reached the box to finish the attack. 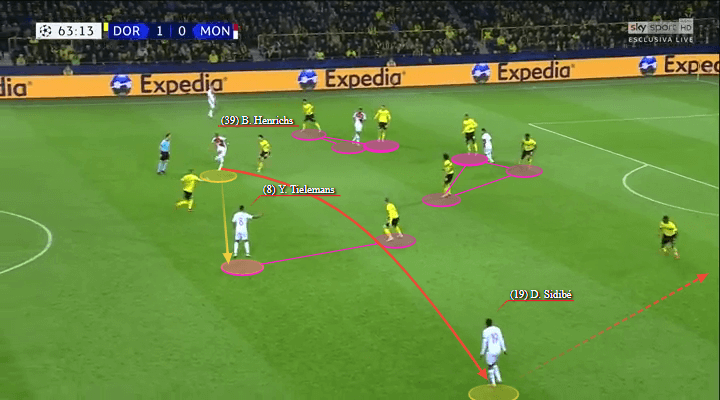 The youngster often goes for long balls as he is seeking an off-beat action. He usually looks for Djibril Sidibe on the other side of the pitch as his teammate is often left uncovered and able to attack. 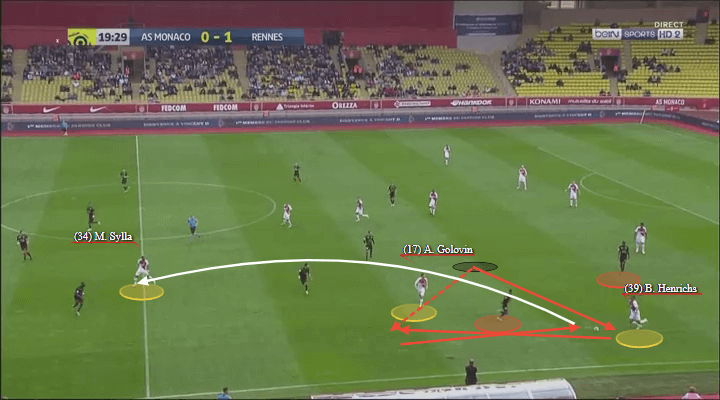 His strong decision-making is crucial when he is put under pressure. In this situation, he made a one-touch pass combination with Golovin (as they usually do) and then made a long range pass to Sylla to make the offensive transition easier. 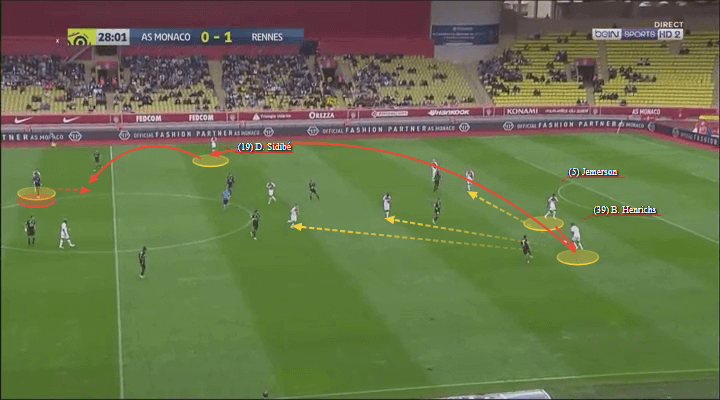 Instead of making a short pass to one of his four teammates, he found an opportunity in passing to Sidibe as he was left uncovered and was able to make a run on the flank or pass the ball further. 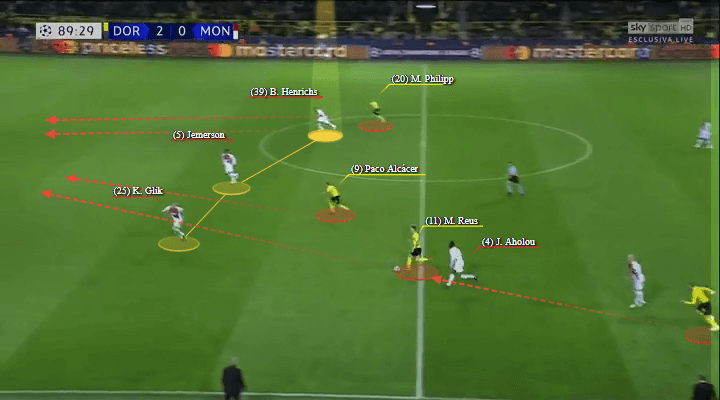 He is focused in moments of transition too. In here the team had to react quickly to Borussia’s counter-attack and he made sure the right area is covered as the back-four couldn’t position properly. 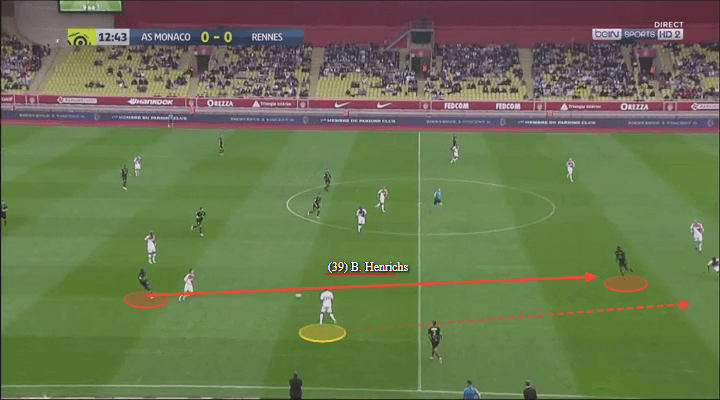 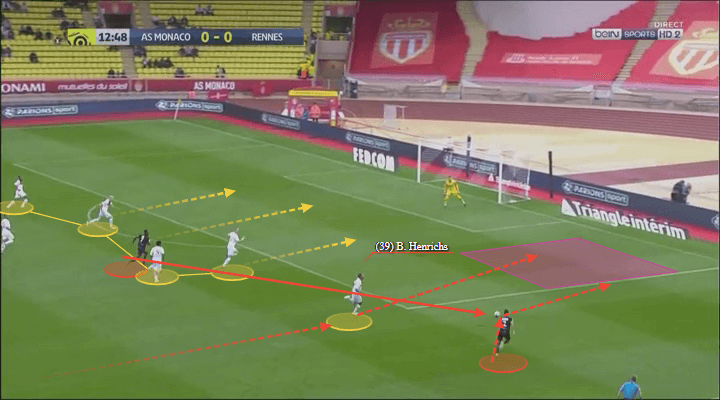 He averages 8.7 defensive duels per 90 and an impressive 5.21 interceptions. His impact at the back is as strong as the one he has up front. He’s also doing 9.84 recoveries per 90 minutes adding 1.23 clearances.

As a young player Henrichs has to put some more work into his performance. His average pass accuracy percentage is 78.8. He hardly hits the 80% mark and combined with the fact that his speed is not among his best abilities that could affect the team’s performance and create even more defensive troubles. He often finds trouble going back on position especially against faster opponents and the sometimes missing support from the midfield makes it even harder for him.

He is one of the most useful players at the team right now. If the newly announced Monaco manager Thierry Henry finds the balance and tries to make the defence – midfield – attack connection stronger, working on the transitions, Henrichs would be able to do what he does best – create chances. His playmaking is so strong that combined with Golovin’s creativity and Falcao’s shooting power can do wonders. He just needs more support defensively as the central midfielders are often leaving gaps that can hardly be covered and that makes all of Benjamin’s efforts look like a waste.