Milan Women kicked off their Women’s Cup campaign by winning against Tokyo Verdy Beleza in the first match of the tournament which is actually taking place in Louisville in the United States. Milan’s participation in this international competition will be very beneficial in terms of experience and exposure to the world as well as in terms of assessing the players’ performances on an international level and against various teams from distinct leagues including Tottenham Women, Racing Louisville and OL Reign.

Milan’s win against Tokyo Verdy Beleza means that they have qualified for the semi-finals and they will need to beat the hosts Racing Louisville in order to qualify for the final. This could be a tricky match for the Rossonere since they will be facing a solid team with players being in the middle of their NWSL season while Milan are still in the pre-season. Therefore, the rhythm, the physical readiness and the cohesion between players will most likely serve Racing Louisville and could make it a bit complicated for Milan to win. Nevertheless, Milan’s performance in their first match was reassuring as they were able to score three goals and what was more significant is that the integration of the new players is going according to plan. What proves that is the fact that Asllani was able to score twice with ease as she showed great confidence and chemistry with her attacking teammates.

In this tactical analysis article, we will analyse Milan’s performance both from an attacking and a defensive perspective in order to explore how the head coach Maurizio Ganz is planning to start the season. It will also be an analysis to see what tactics he may rely on with his current new squad in the upcoming games.

Before starting with the analysis, we need to explore how both teams were lined up for this match. Milan Women kept using their usual 3-4-3 formation with Laura Giuliani, Laura Fusetti, Małgorzata Mesjasz and Alia Guagni in defence, Angelica Soffia, Marta Mascarelo, Kamila Dubcová and Linda Tucceri Cimini in midfield while Lindsey Thomas, Valentina Bergamaschi and Martina Piemonte formed the attacking trio, knowing that Piemonte was the striker before getting subbed by Kosovare Asllani during the second-half and that Thomas and Bergamaschi were the wingers.

Tokyo Verdy Beleza started the game with Momoko Tanaka as a goalkeeper, Risa Shimizu, Tomoko Muramatsu, Azusa Iwashimizu and Asato Miyagawa in defence, Mayo Doko, Yu Nakasato and Momoka Kinoshita in midfield, while both Roka and Nanami Kitamura played on the wings and Riko Ueki was the team’s striker.

Milan started the game with some high pressing on Tokyo Verdy Beleza’s defence in order to oblige them to give the ball away or commit passing mistakes more often. And that’s exactly what happened on several occasions and Milan were able to either intercept passes or win throw-ins due to inaccurate Tokyo Verdy Beleza passes.

Milan’s usage of this high pressing should be monitored very well in order to know when to use it and when to avoid it, knowing that such advancement of players can lead to dangerous counter-attacks when playing against tougher teams with great build-up abilities and quick attacking players. 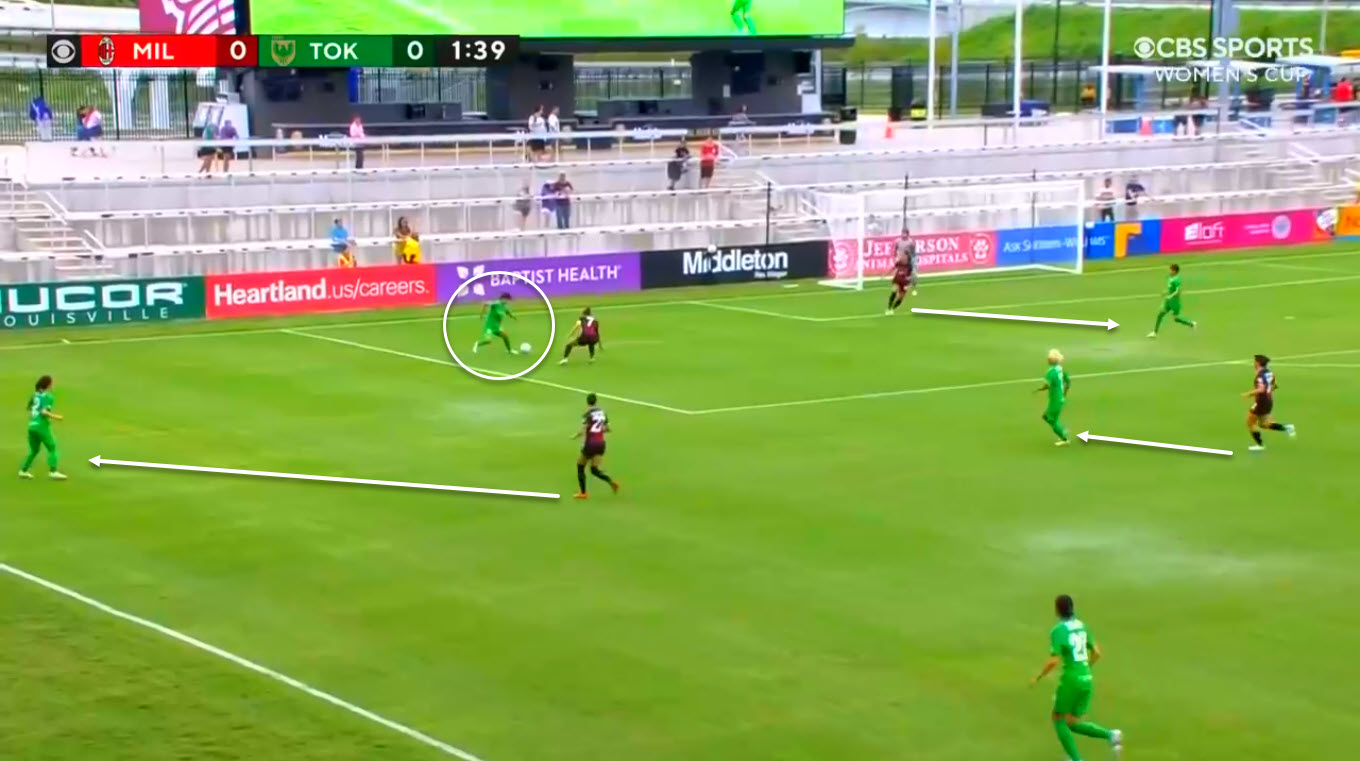 Milan tried some different attacking patterns in this match and relied mainly on penetrations inside the box from midfielders and on quick passing exchanges with players who move without the ball such as Dubcová. Milan’s point of reference was Piemonte, who is continuing to be the team’s leader in attack before getting subbed by Asllani.

Moreover, the roles of Bergamaschi and Thomas are very important and the chemistry between both players can serve the team a lot during this season as both players are quick, have good vision and can be extremely dangerous inside the box. In this example, Bergamaschi moved towards the middle and acted like a striker before receiving the ball and giving a key through pass in the direction of Thomas’ run. The latter was able to get the ball despite being surrounded by opponents but her shot went off target.

Milan will need to work further on such kind of movements and work on executing a few systematic patterns for different situations in order to confuse opponents and increase their attacking success rate. Friendly games like these represent the perfect opportunity for the coaching staff to work on these aspects as well as to fix the defensive movements and organisation. 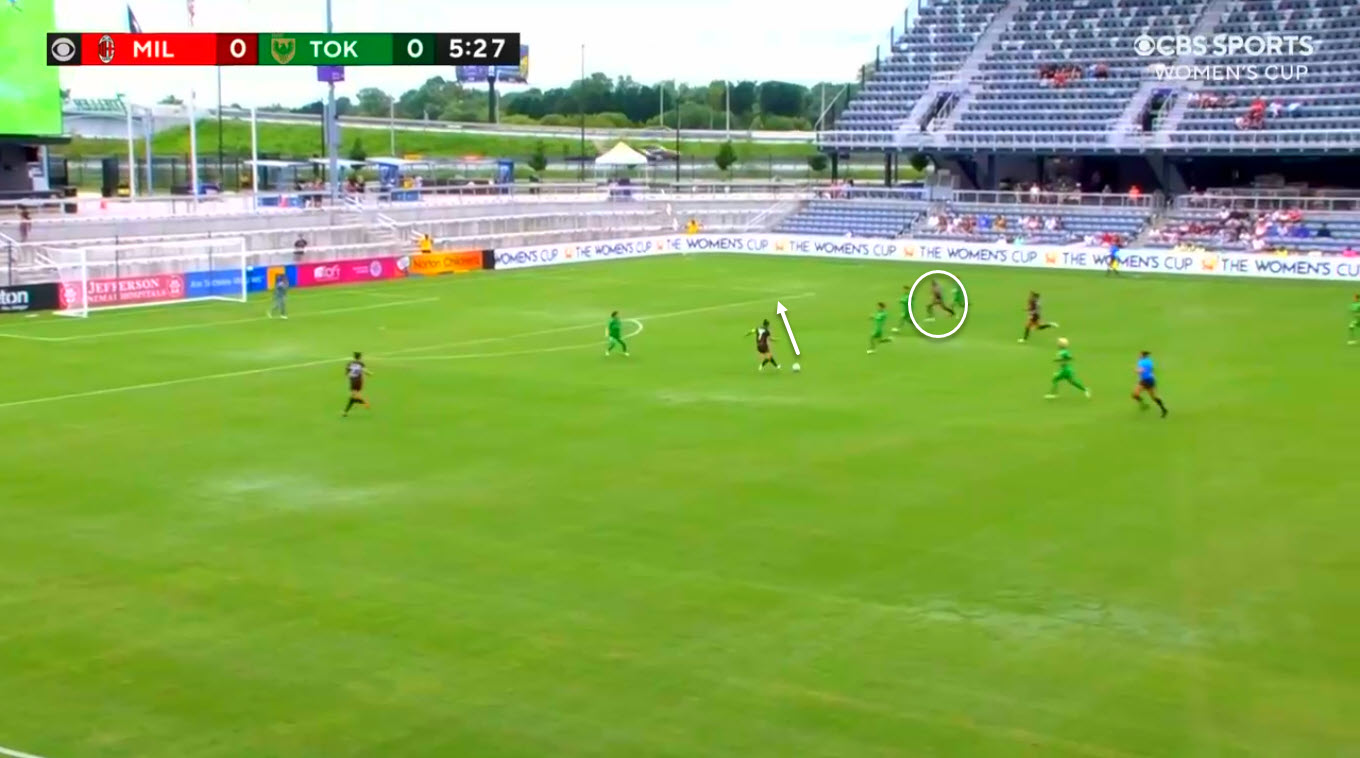 Piemonte’s role in this match didn’t just include moving inside the box and waiting for passes. She was very active inside and outside the penalty area as she also retreated regularly to get the ball and to defend as well. On certain occasions, she also was responsible for passing and she did so with precision, which can give some new ideas to the coaching staff in terms of variation of attacks.

In the following picture, it was Piemonte who intercepted the ball in her own half, evaded her opponents and gave a through pass to Thomas that could have become an excellent assist if Thomas didn’t miss the chance. And in this regard, improving Thomas’ finishing would be great for the team in the near future as the player has got the speed and the dribbling abilities needed to be always dangerous in the final third, all that she needs to be a more impactful player is consistent good finishing. 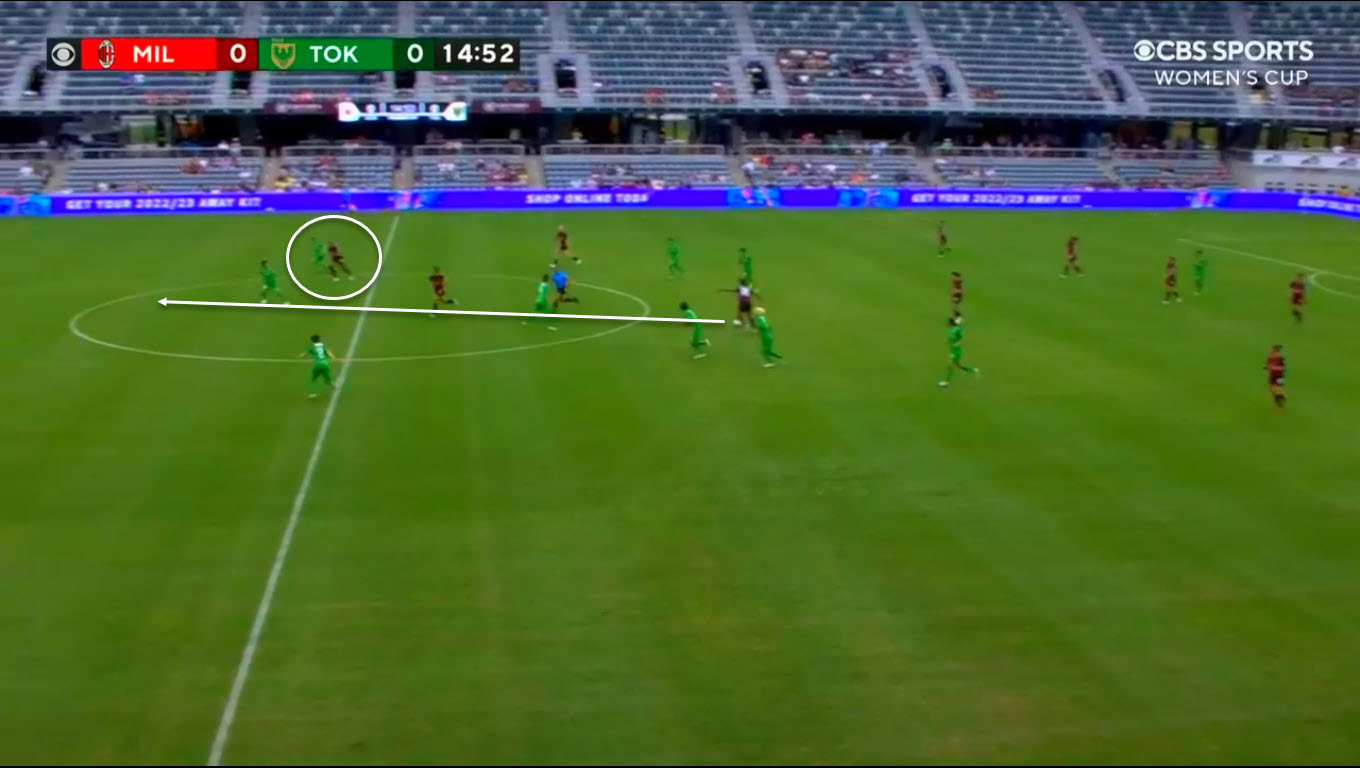 Milan’s first goal action confirms what we have just said concerning Piemonte and her excellent presence both inside and outside the box. If she manages to remain concentrated and keep the same level of dynamism throughout the season, then Milan would surely make better results than last season especially if she collaborates with Asllani well.

This goal was scored thanks to an accurate through pass from Bergamaschi after fixing her direct opponents, and more importantly, the credit goes to Piemonte for guessing Bergamaschi’s most suitable passing direction and immediately running in that direction to make her teammate’s mission easier and meet the ball at the right timing, winning some time over the opponents before finishing the action with a goal. 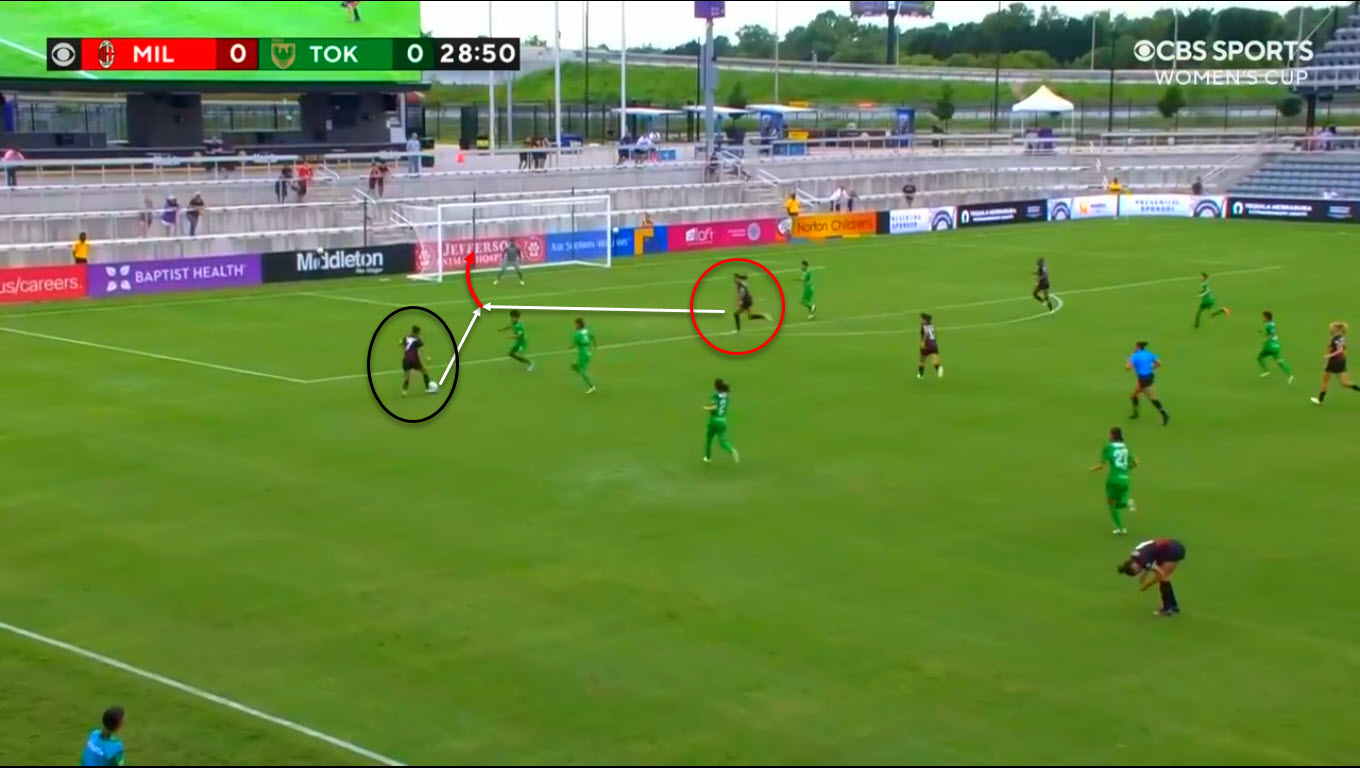 The second-half witnessed the subbing of Rubio Avila for Mascarello, Selena Babb for Giuliani, Greta Adami for Bergamaschi, Sara Thrige for Soffia and Asllani for Piemonte. During the first attacking action involving both Asllani and Thomas, the latter was able to intercept the ball and give it to Asllani who immediately gave a through pass towards the right-wing where Thomas was running.

Asllani then ran towards the box to receive a cross from Thomas, but at the same time, she was intelligent enough to avoid her marker at the perfect timing by pretending to run in one direction while changing her running trajectory when reaching the box. Thomas saw that change in direction and provided an assist for the first Asllani goal with Milan which looked easy to execute but required quickness and intelligence in avoiding the opposing defender to score with ease. 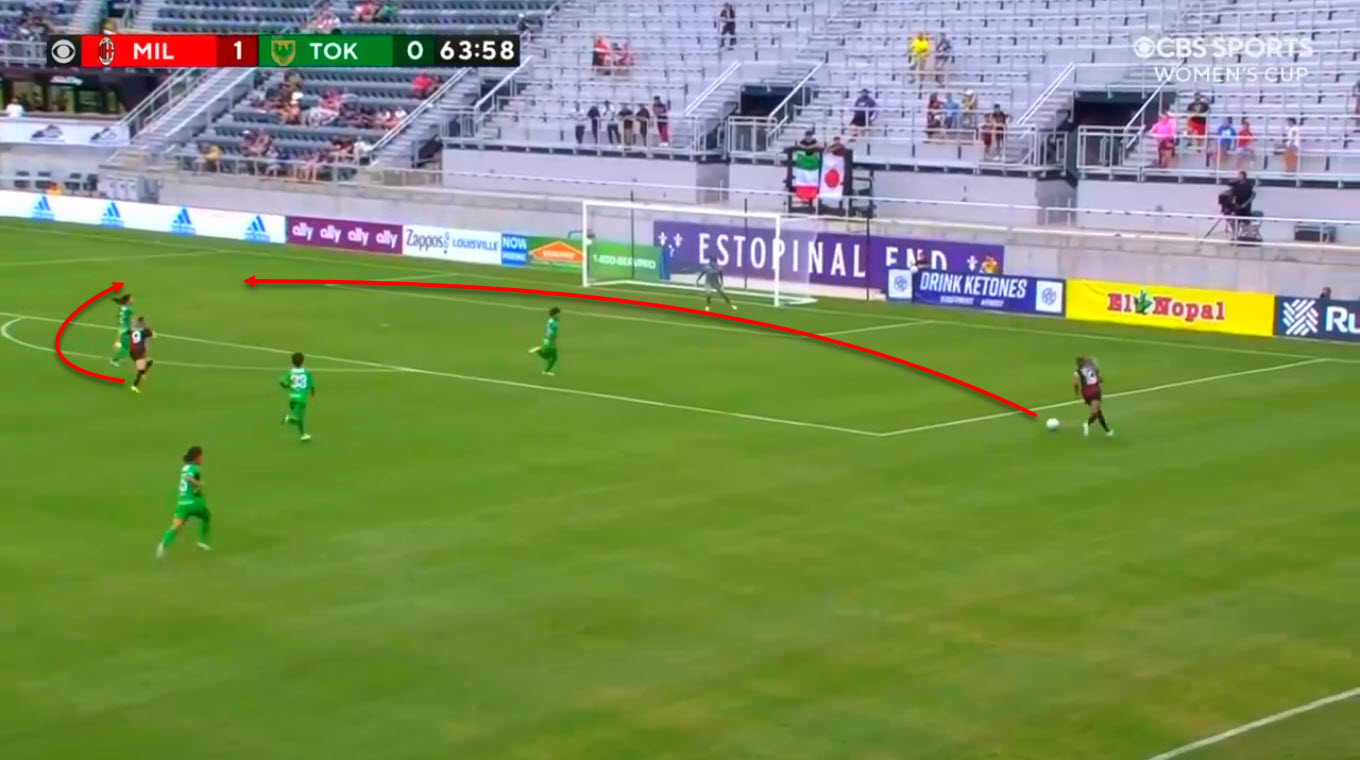 Michaela Dubcová also got a chance to play during the last 15 minutes of the game and she was at the heart of Milan’s third goal of the match as she asked for a pass at the back of Tokyo Verdy Beleza’s defensive line while making a movement towards that direction. Thrige saw that and provided a pass that was intercepted and came to Asllani by hazard.

She quickly made a one-two combination with Rubio and was able to ship the ball towards the net with her right foot, scoring a beautiful goal that shows not only Asllani’s finishing skills and accurate/quick decision-making but also Rubio’s good vision and passing skills. 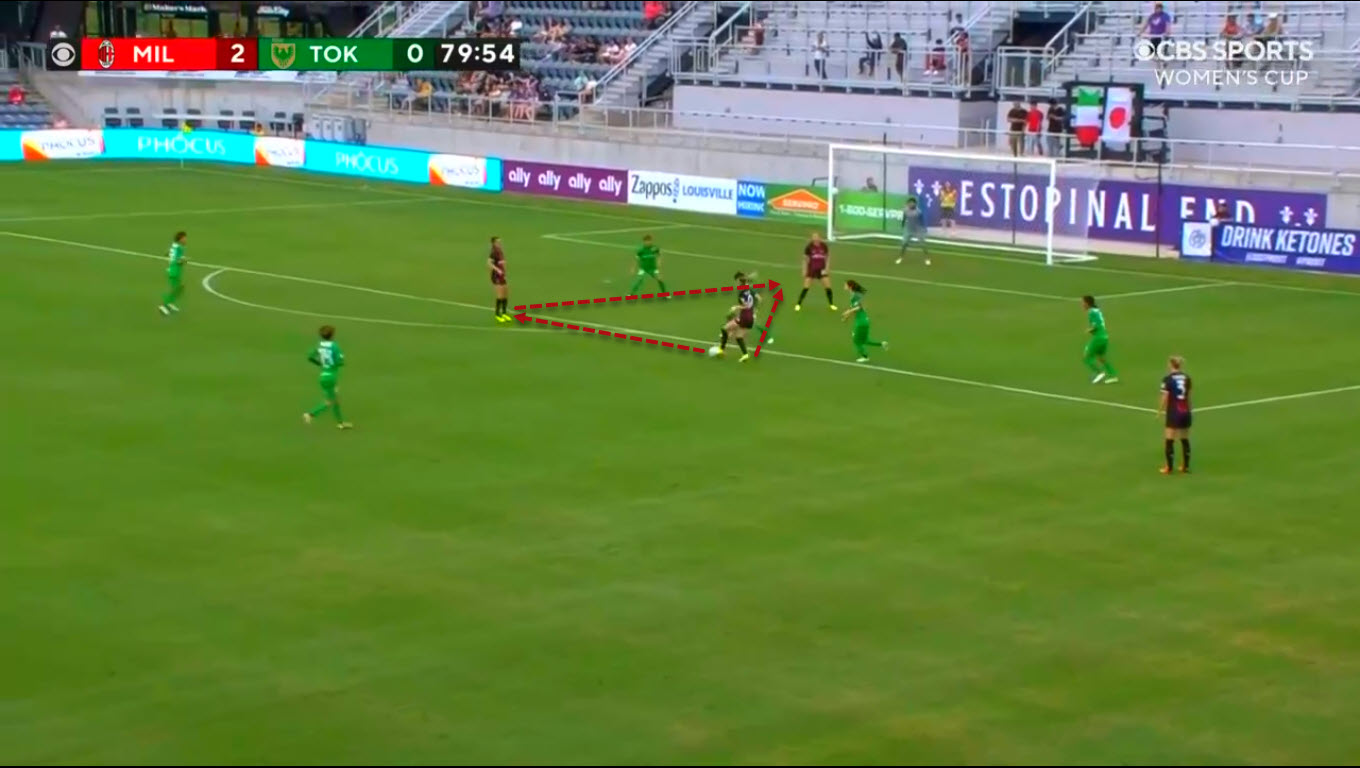 This match was Milan’s first test in the Women’s Cup and their performance was good overall. The team should build on this win and prepare well for their upcoming semi-final encounter against Racing Louisville. This game will require much more defensive compactness and less errors while making sure to exploit every attacking opportunity and improve the finishing accuracy in front of goal if they want to reach the final.