After taking the Bristol Rovers job in February of 2021, Joey Barton has since been relegated to League Two and then Promoted to League One. The former Manchester City midfielder was one of the biggest characters in the Premier League and is now establishing himself as a very solid manager.

Following a dramatic end to the 2021/22 season, where Bristol Rovers required a five-goal swing on the final day of the season, Barton’s side went on to thrash Scunthorpe United 7-0. Having just signed a new long-term contract with the club, the Scouser is making the right moves on and off the pitch as he looks to aim for the EFL Championship long term.

This tactical analysis will look at the tactics used by the former Rangers man in the early stages of the 2022/23 campaign. In this analysis, we will delve into the tactics that will be used to guide The Gas to a comfortable finish.

When in possession, Bristol Rovers set up in a 4-2-3-1 formation which is very flexible and mobile. This formation allows for the midfield to be comfortable and compact but, at the same time, the attacking players can be expressive.

When playing from the defence, Barton wants his goalkeeper to involved in the build-up heavily. By doing this, it allows The Gas to have an extra man in play whilst building up. The goalkeeper playing high allows for the defenders to use him as an extra option to help relieve pressure.

Furthermore, the other advantage of this is that the ball-playing midfielder is able to maintain a more progressive and advanced position in the middle of the pitch. This is important in building up as it allows for link-up play to take place. 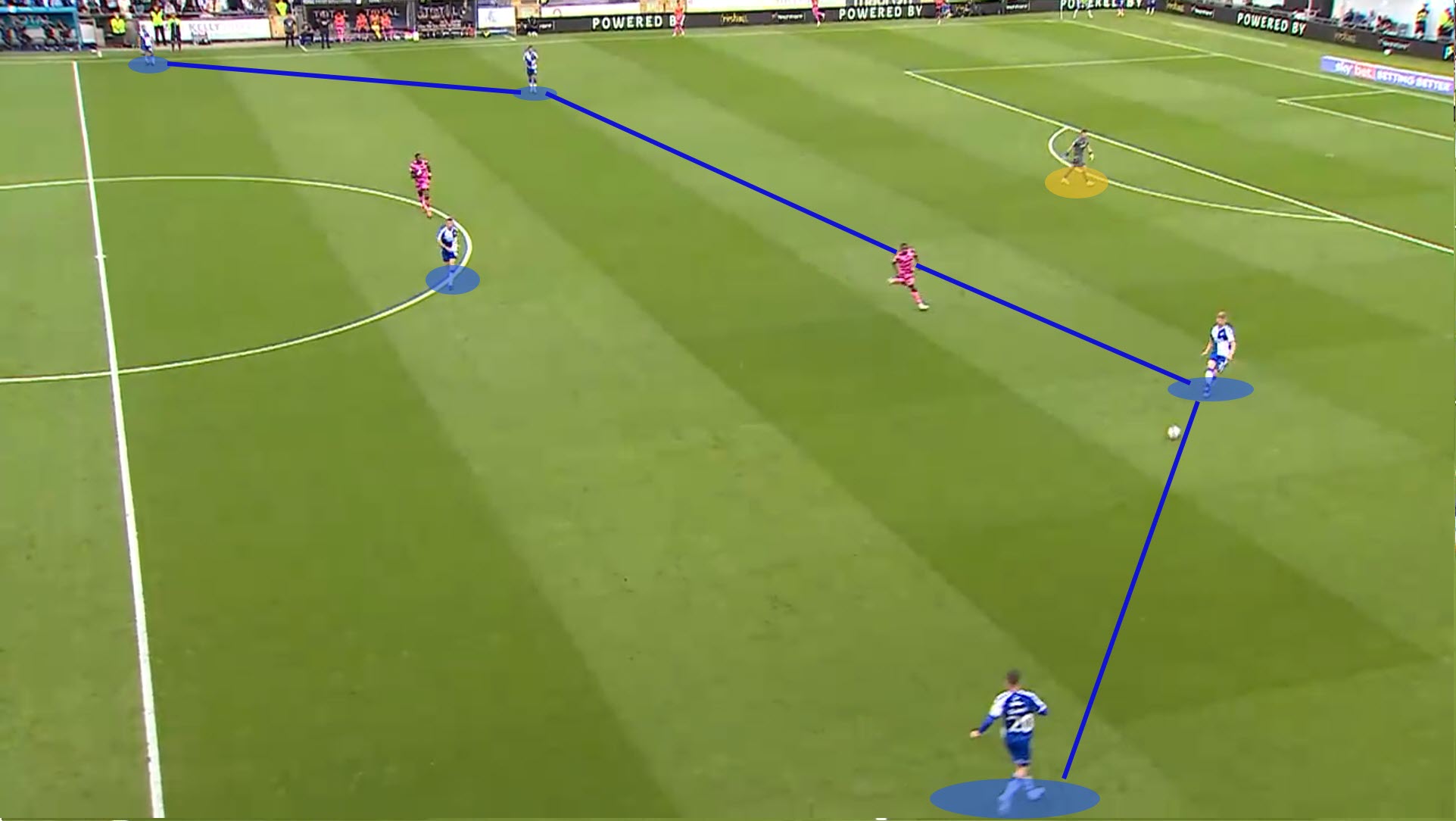 In the build-up, Rovers want to progress the ball centrally. The set up as seen is very structured to create space in the central area of the pitch. Below is an example of how they like to set up once possession in the opposition half has been established.

The midfielders play on different lines to ensure there are always multiple options to pass to. One player drops deeper to create an option in between the wide, split centre-backs. The split centre-backs encourage the fullbacks to push further forwards into a more attacking role.

The midfielder who looks to pick the ball up deeper is able to play forwards into his teammate’s feet. As you can see, the attacking players line up in a front four with the ’10’ playing as a second striker. For this method to work, rotations and clever off-the-ball movement are required. Static positioning and slow passing will make it easy for the opposition to defend.

The role of both holding midfielders is crucial in breaking down the opposition. Runs from deep must be made and the system allows for this to take place. Bristol Rovers are excellent at keeping possession, averaging the second most in League Two last season with 55.8%. By dominating the ball they are able to impose their style of play onto their opposition and get results to match. 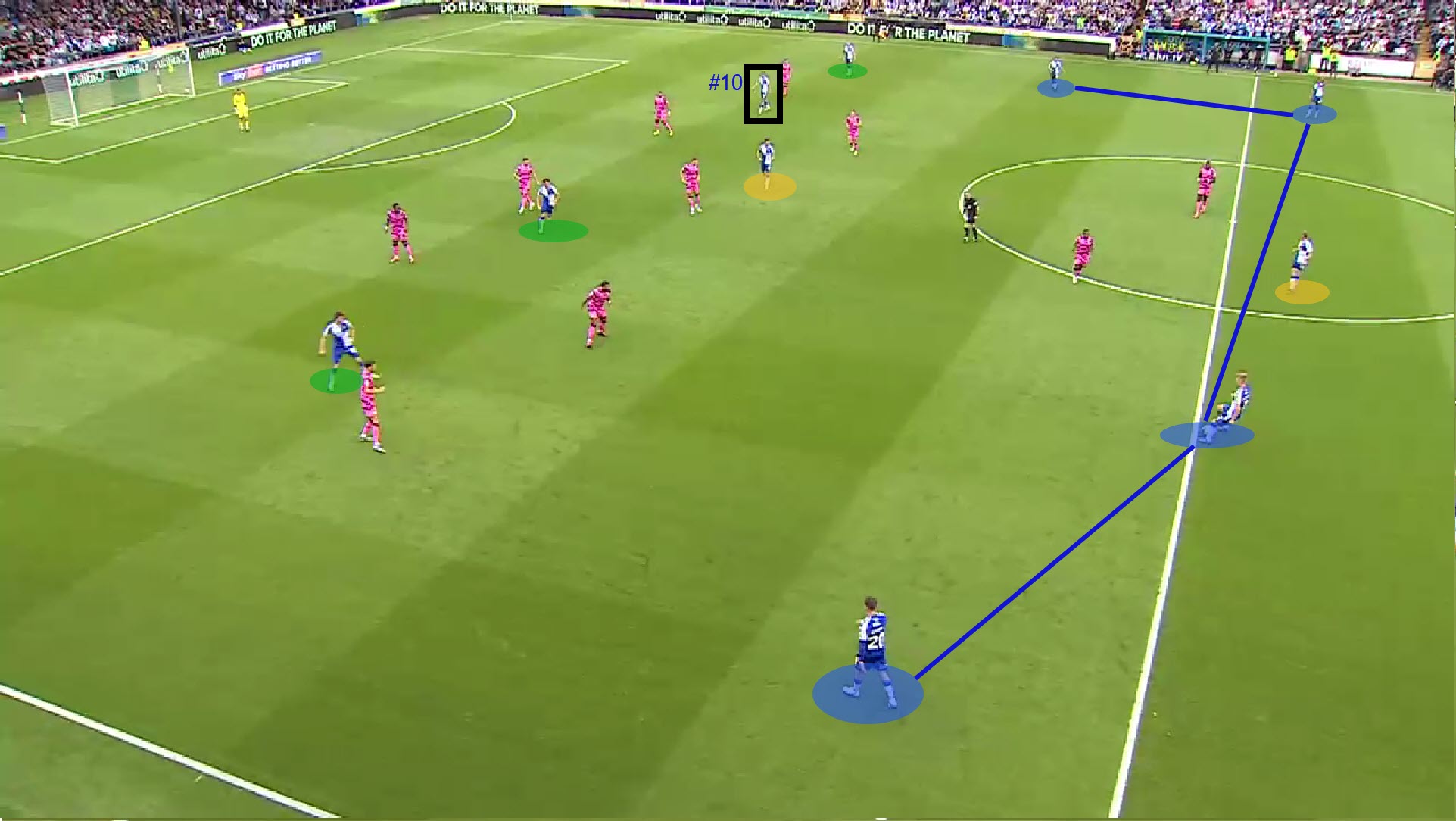 The wide players under Joey Barton are very direct and positive. In the build-up, they take up clever positions wide of the opposition fullback. Bristol Rovers’ fullbacks are somewhat conservative in the sense they are rarely more advanced than the winger. This allows for more space to be left for the winger to attack into.

Once Barton’s men have created a chance for the wingers, they are direct in taking the opportunity. Aaron Collins scored two goals from one versus one situations against Burton. To create these chances, Rovers looks to shift play from right to left quickly in order to isolate the fullback against a winger.

The confidence and drive from Collins allow him to come inside on his right foot before pulling a low shot into the near post and past the goalkeeper. A clear theme from The Gas is to give the wide players as much space as possible, especially in the wide areas.

In League Two last season, Barton’s men had the highest success rate of ‘1v1’ dribbles with a success rate of 57% and an average of 27.67 per 90. The direct style of play is successful for Rovers and something that they will continue to do throughout the season. 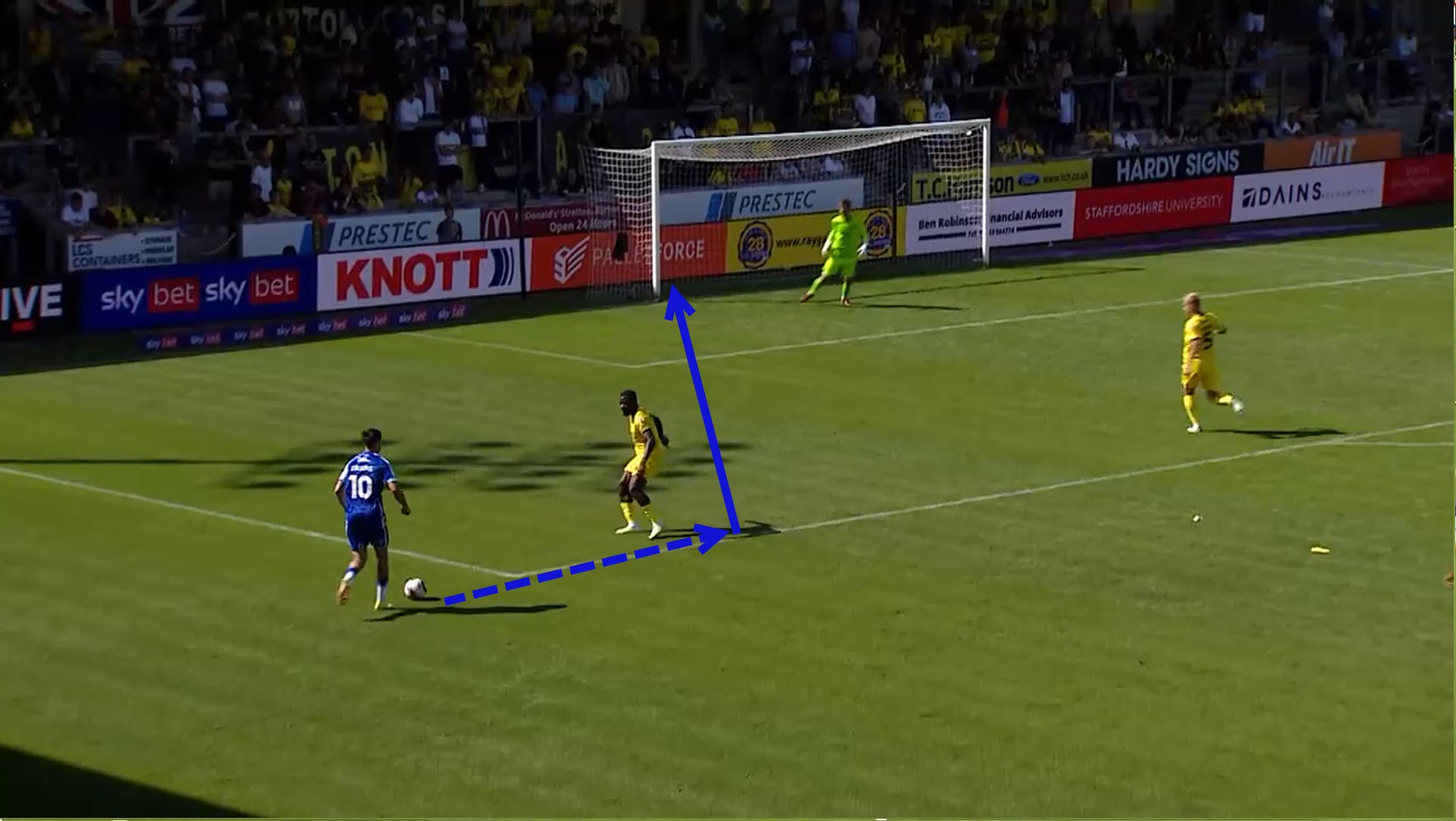 Another area in which Joey Barton has drilled his side is in the set-pieces department. Rarely do Rovers lump the ball into the box from a corner of a freekick. They look to work better goalscoring opportunities with routines that are well practised.

Their only goal in the victory over Oxford United came from a well-worked free-kick as seen below. Having this type of ability can be the difference between a mid-table finish and a play-off place. If they continue to execute their set-pieces, they will score many goals over the course of the season which will benefit them massively. 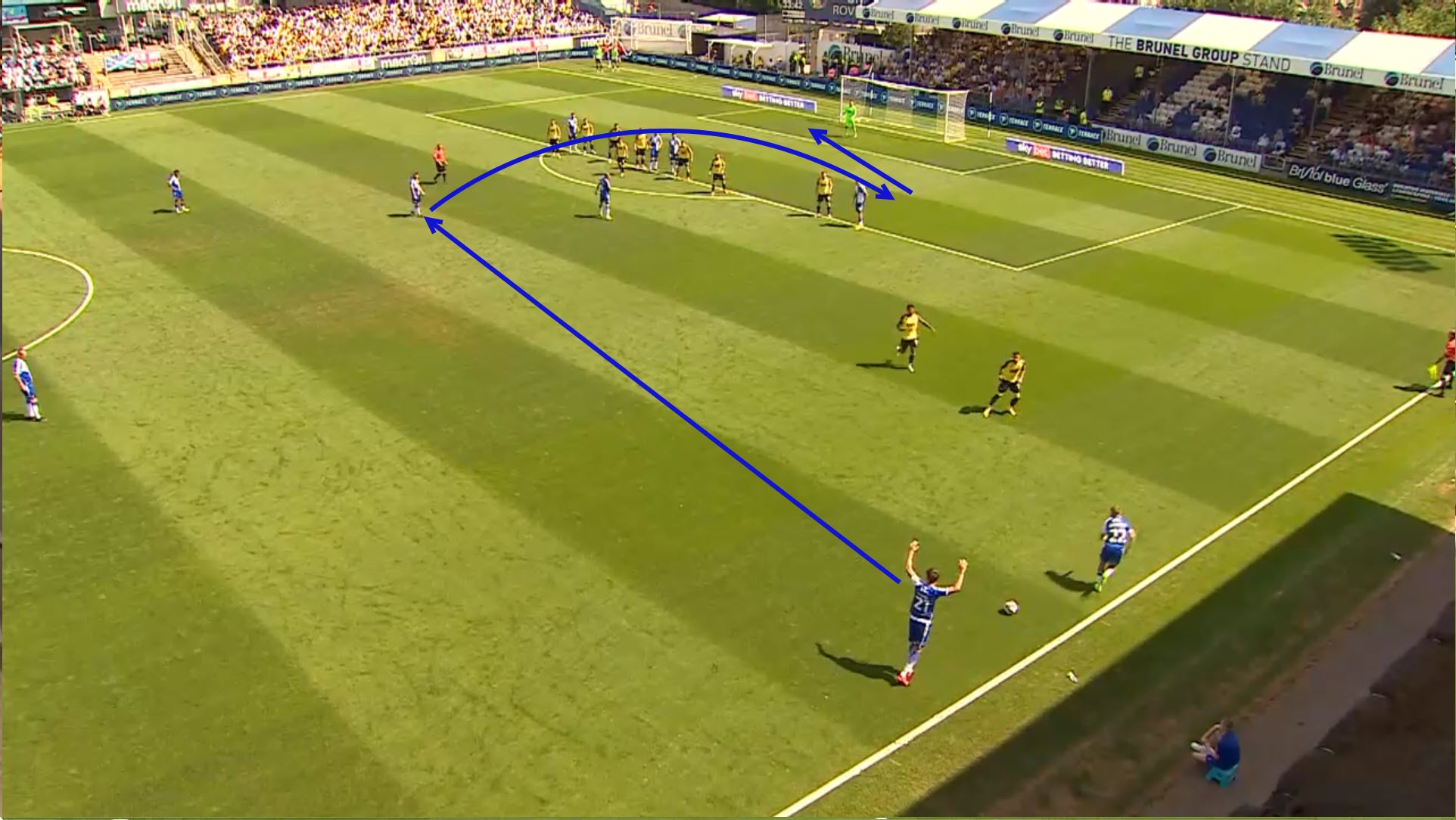 Without the ball, Bristol Rovers are a very aggressive side, something that reflects their manager in his playing days. Boasting the highest challenge intensity in the 2021/22 League Two season with 8.2, Rovers are not afraid of getting stuck in.

Out of possession, The Gas sit in a 4-2-3-1 formation. They make it their priority to ensure that the shape is correct and that there is no lack of concentration which could cost them. Although it is a medium-level block, they rarely find themselves standing off the opposition. Barton wants his side to regain possession and force the opposition long.

The compactness and discipline of the two midfield players to screen the defence stop any real threat of balls into the striker’s feet. This set-up out of possession is defensively solid as the wide attackers can drop deep to help cover the fullbacks. The ’10’ can also either join the striker in a press or drop deep to create a midfield three depending on the situation. 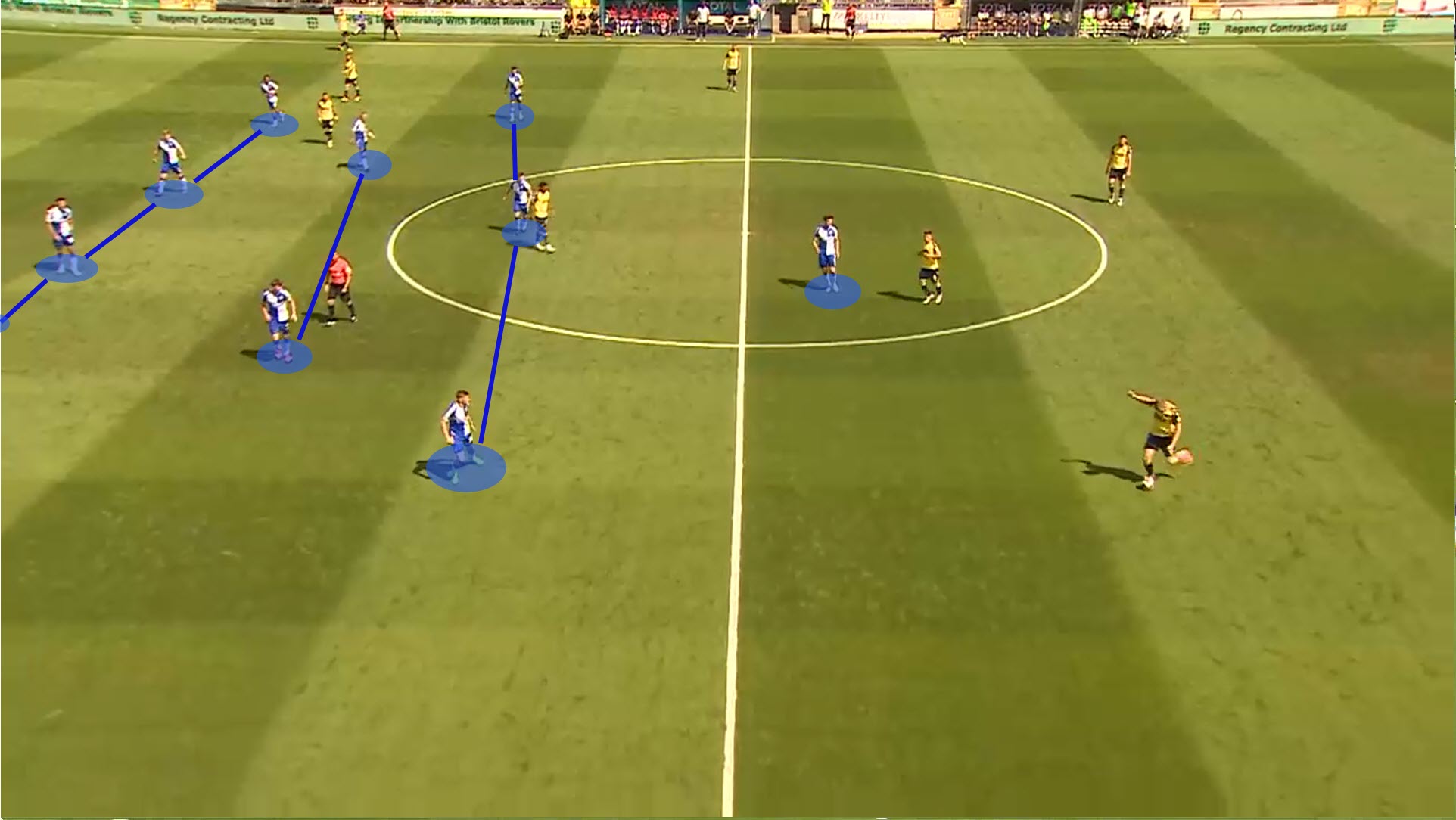 Forcing the opposition long is something which can be done by clever movement off the ball. The player closing down the opposition has to think and position himself correctly in a way that leaves them with only one option of playing it long.

Below is an example of how cutting off passing lanes whilst pressing can cause the opposition to make a mistake or force them to play the ball long. The opposition defender has no other option but the goalkeeper. As this is well worked, Rovers’ attackers are alert and prepared for this. They make an early move to press the keeper, forcing him to play long where there is a high chance of winning the ball back. 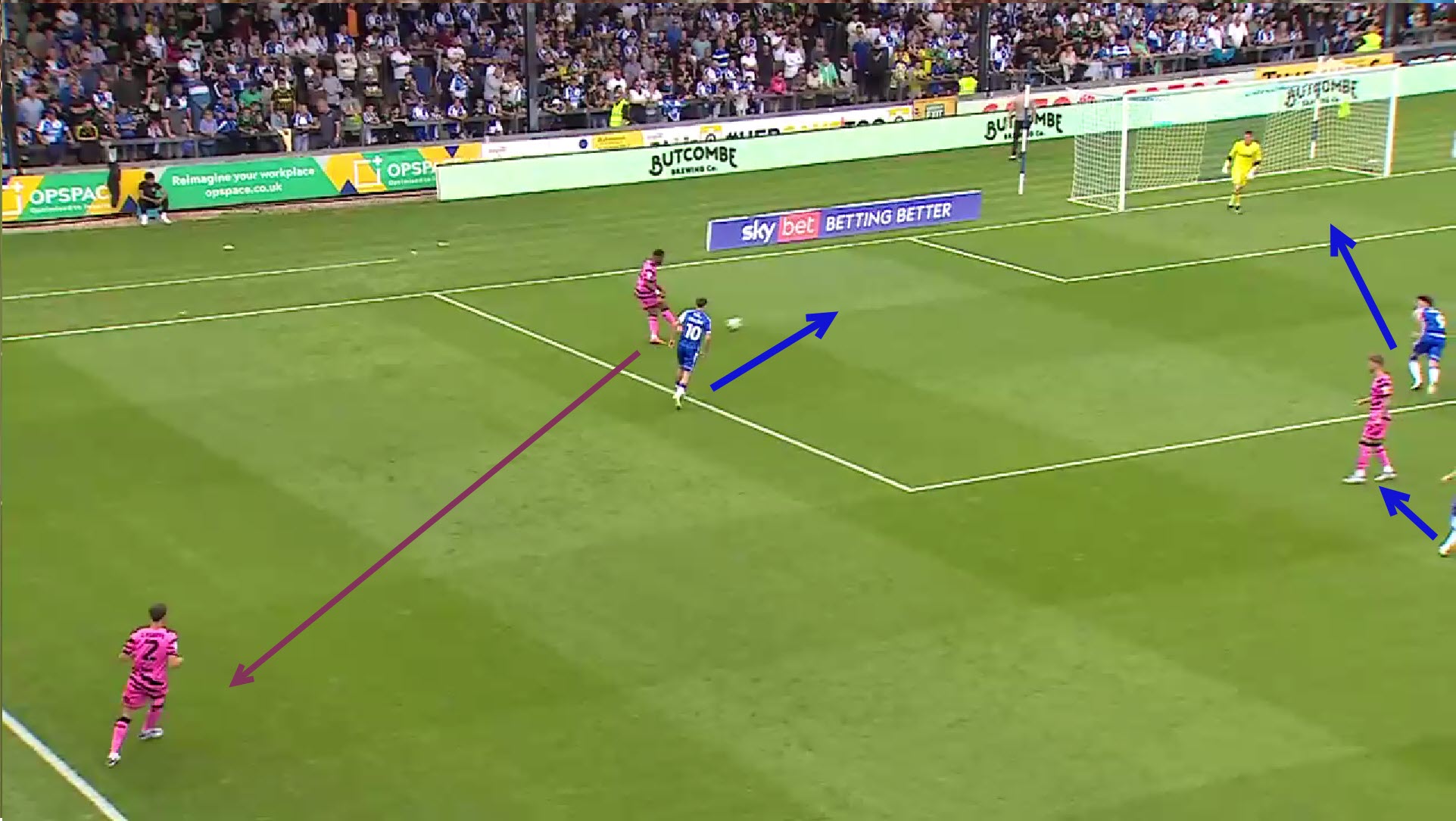 Along with the intensity off the ball, comes the high line which follows. A high line causes the pitch to become compact only leaving space in behind. As previously mentioned, Barton likes to have his goalkeeper heavily involved in the play. The goalkeeper is able to defend the space behind the defence with a good starting position.

The keeper is quick to react and also confident in his ability. Due to this, he is able to mop up any danger or threat calmly. Below is an example of how the keeper has intercepted a long ball and brought it under his control. Many teams would encourage the keeper to stay in his box or even to put the ball out of play. Barton wants his keeper to be an instrumental part of the team.

The keeper looks to find a pass down the line to keep possession. This allows Bristol Rovers to fully defuse the threat the opposition had. 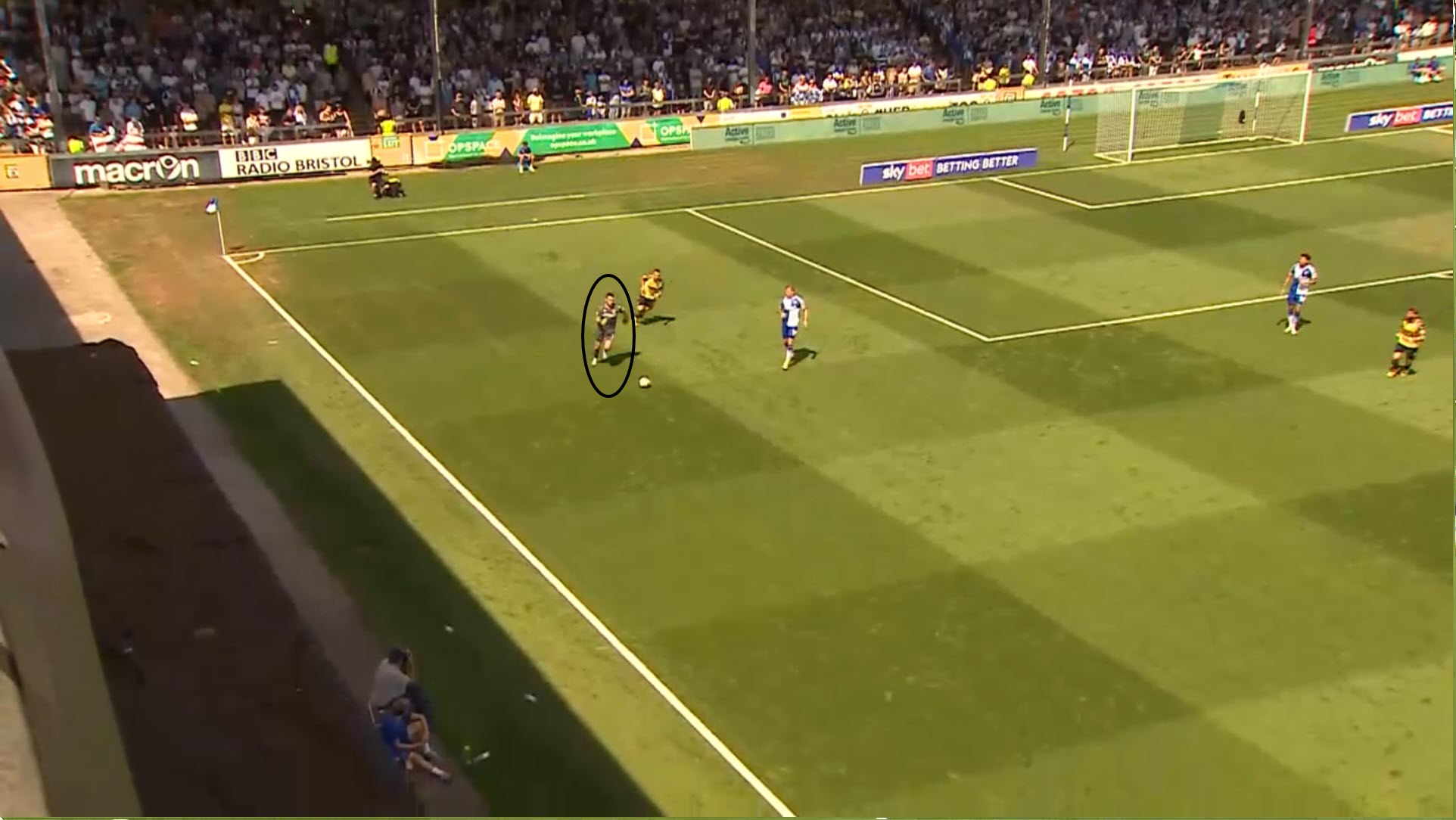 However, on a number of occasions, the Rovers defence was found to be too narrow. With the attacking wide players not having too much defensive responsibility, it can often lead to space outside. As the attacking players do not sit that deep out of possession, it leaves the fullbacks isolated.

The job of covering is down to one of the midfield players who should move across and double-up with the fullback. However, with the speed of play, it is sometimes difficult to react quick enough. 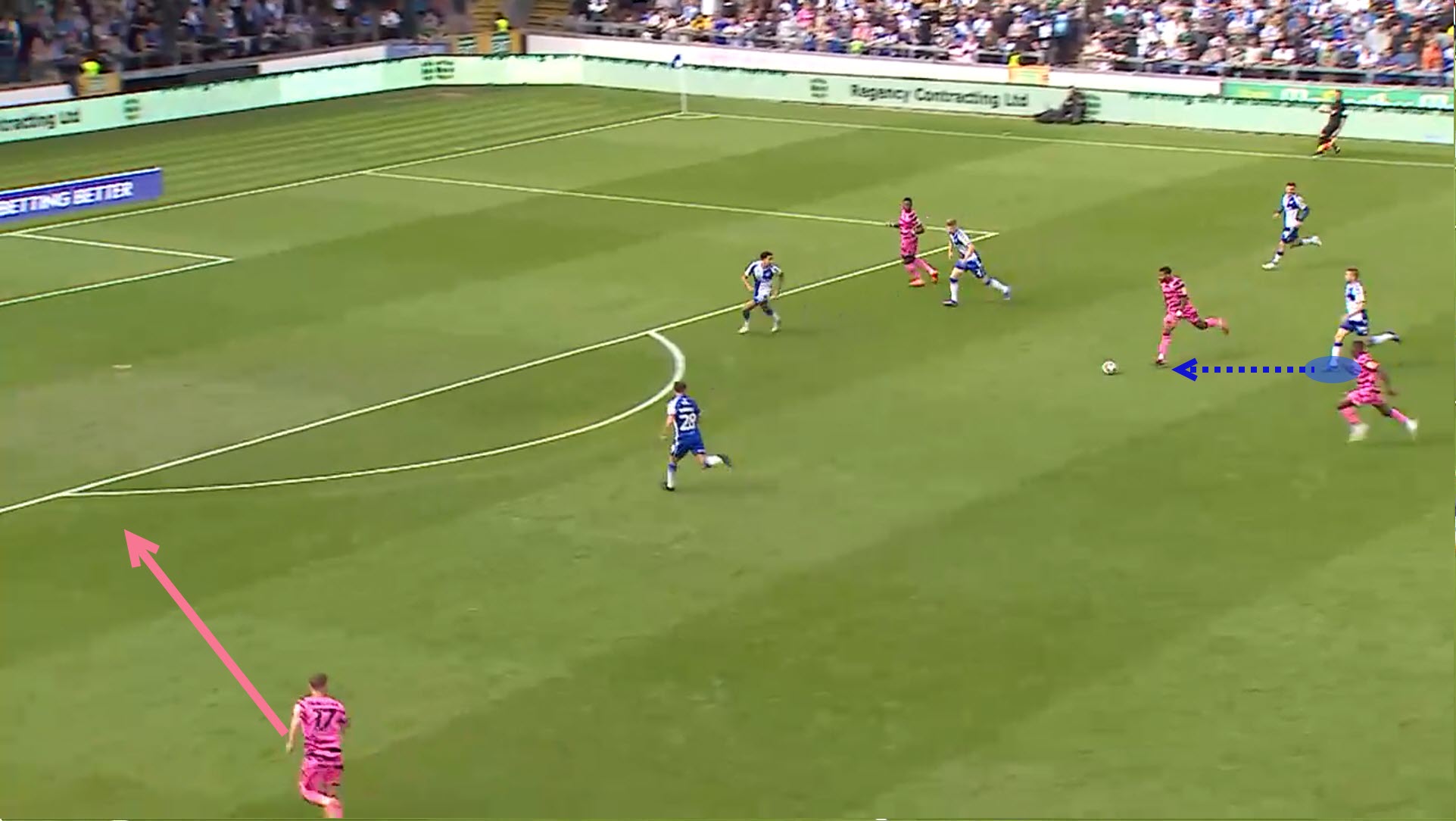 Once Rovers have regained possession, they look to move the ball forwards. However, the way that they do this is not as direct as some teams. They are conservative and calculated in the way that they break forward. They do commit players but look to make the right pass and do not rush.

They are comfortable in keeping possession and slowing the attack down to do so. They look to hit the wide areas where their wingers can drive. 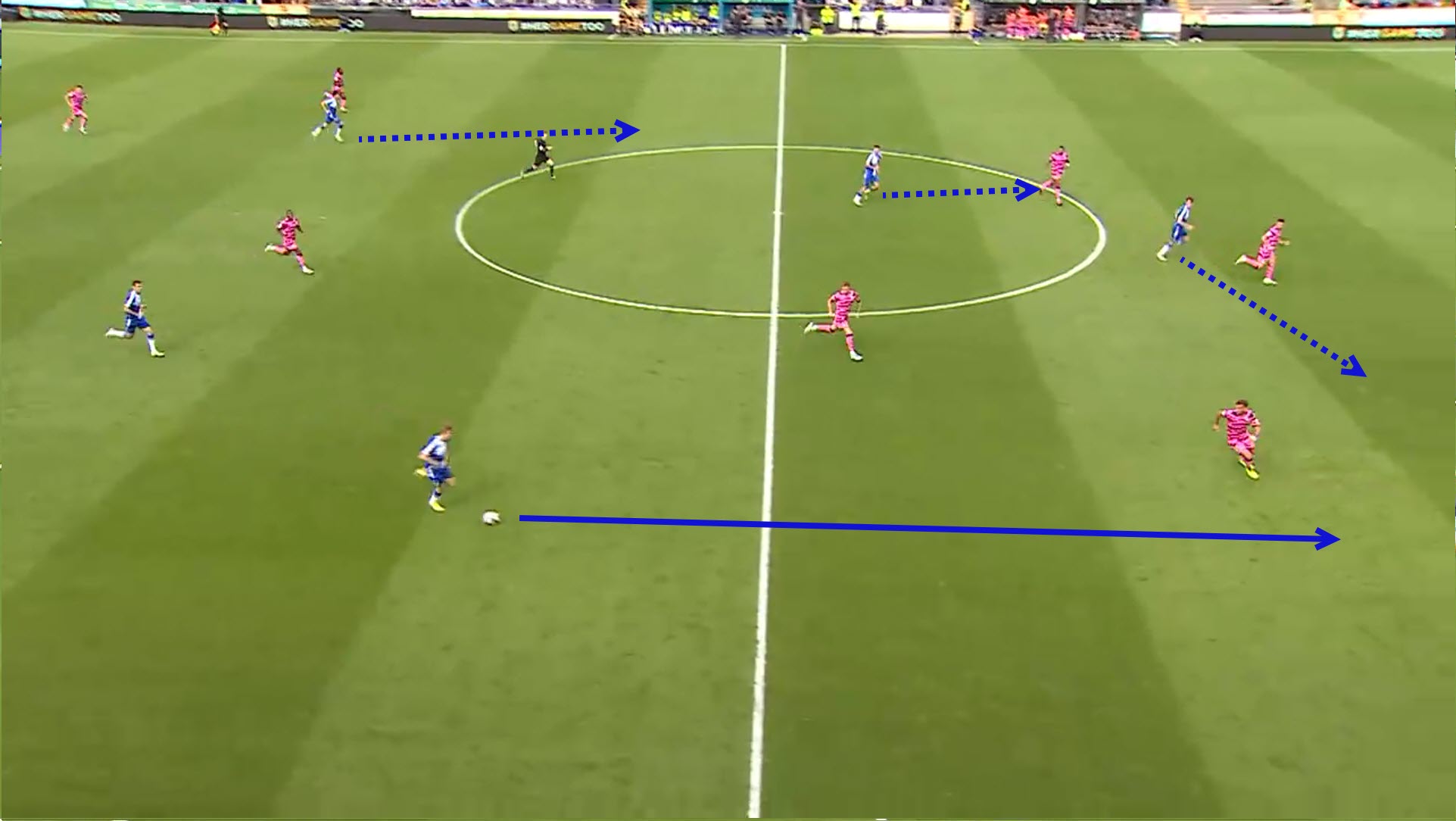 Defensively Barton wants his side to be aggressive so once they lose possession they are quick to try and win the ball back. They hunt the ball in pairs and look to disrupt any transitions.

As you can see, the closest players to the ball look to engage in the immediate turnover of possession. The press is short but aggressive and they are not afraid of giving a foul away high up the pitch to stop a counterattack. 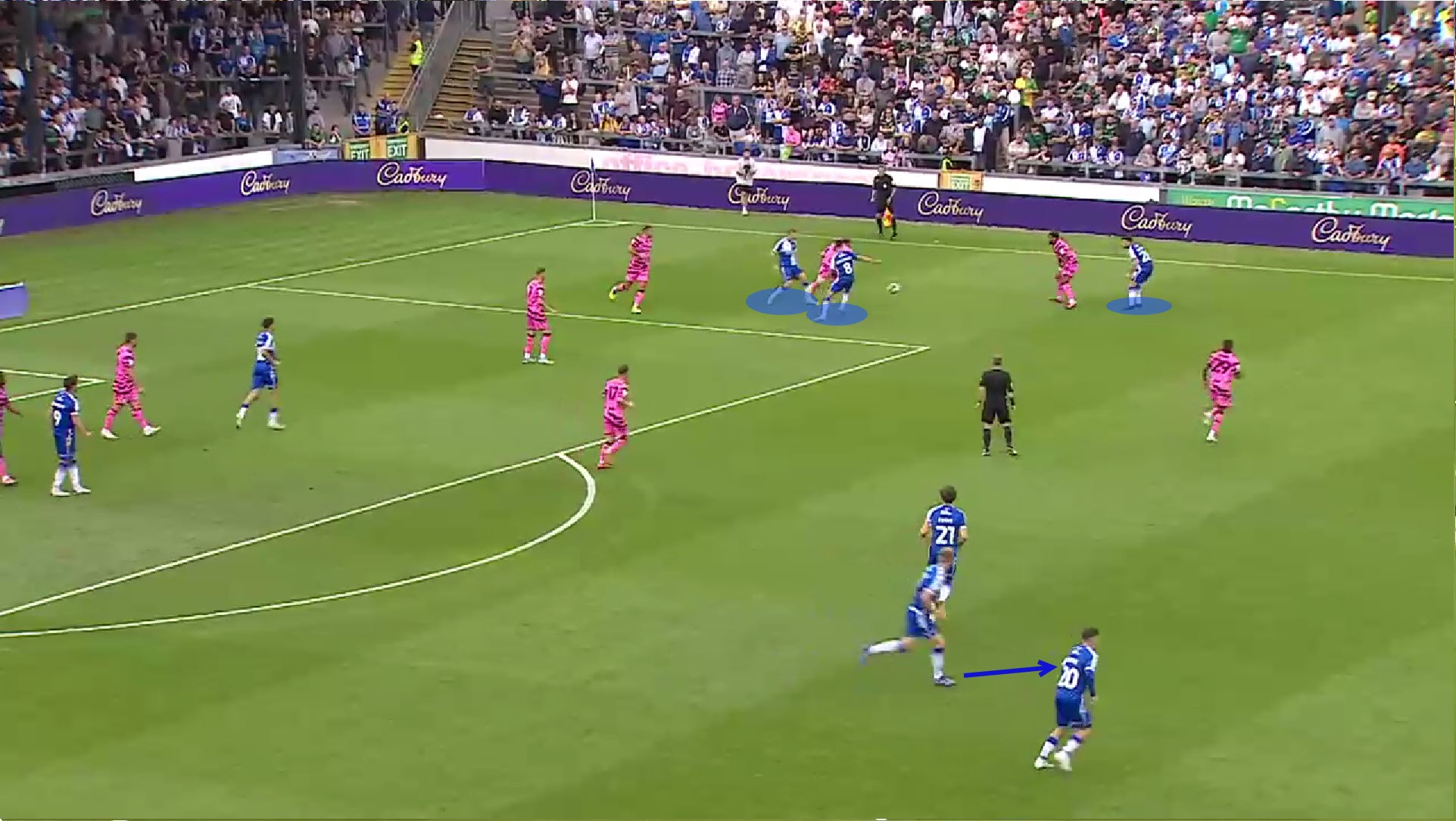 Overall, Joey Barton has made a promising start to his time in charge of Bristol Rovers. With one promotion under his belt, he will be looking to add another over the upcoming seasons. This campaign, Bristol Rovers fans can be expecting a mid-table finish as they look to solidify themselves as a League One club.