“It was hot from the temperature, hot between the benches, hot on the field and hot between the spectators – everything you want and hope for in a match like this early in the season,” said Thomas Tuchel, after watching his side concede a 95th-minute equaliser and drop two valuable points.

The two teams produced a London derby to remember, an instant classic at the Bridge. In many ways, it was the perfect game to celebrate the Premier League’s 30th anniversary; goals, drama and controversy.

On the pitch, the football on display was of the highest quality. It showcased the level of the Premier League at this moment in time, with two of the world’s best managers going blow for blow – on the pitch and off it.

From a tactical point of view, it was fascinating to watch the gameplans and in-game tweaks and adjustments adopted by both sets of teams and managers. Chelsea were the better side for the most part, as Tuchel got the better of Antonio Conte, twice.

This tactical analysis will look at the tactics of Chelsea and Tottenham Hotspur during Sunday’s clash. The analysis highlights how the teams were initially set up along with the mid-game changes and reactions from both sets of managers. 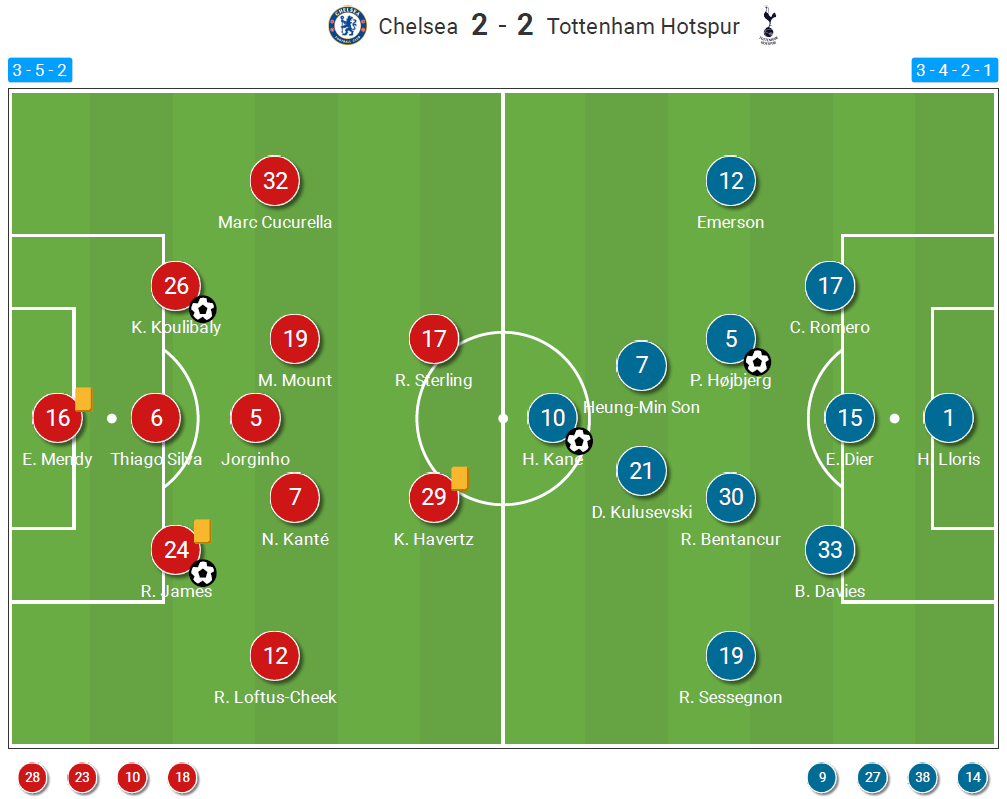 On paper, Chelsea played in a 3-5-2 formation that we have become accustomed to under the German manager. There were two changes from the opening day win at Everton. Ruben Loftus-Cheek came in for captain Cesar Azpilicueta and Marc Cucurella replaced Ben Chilwell at left-back to mark his full debut in a Chelsea shirt.

Spurs were unchanged from last weekend’s 4-1 victory over Southampton. Emerson Royal and Ryan Sessegnon kept their places in the wingback positions. New signings Richarlison, Yves Bissouma and Ivan Perišić started on the bench. The familiar trio of Dejan Kulusevski, Son Heung-min and Harry Kane lead the line for Conte’s side.

The inclusion of Loftus-Cheek, presumably at right wingback, raised a few eyebrows when the team sheets were announced. Tuchel set up in a hybrid 3-5-2 off the ball and 4-2-2-2 on the ball. When the team had possession, Loftus-Cheek moved into the right midfield channel and James played as a traditional right-back. Sterling and Havertz played as the front two. 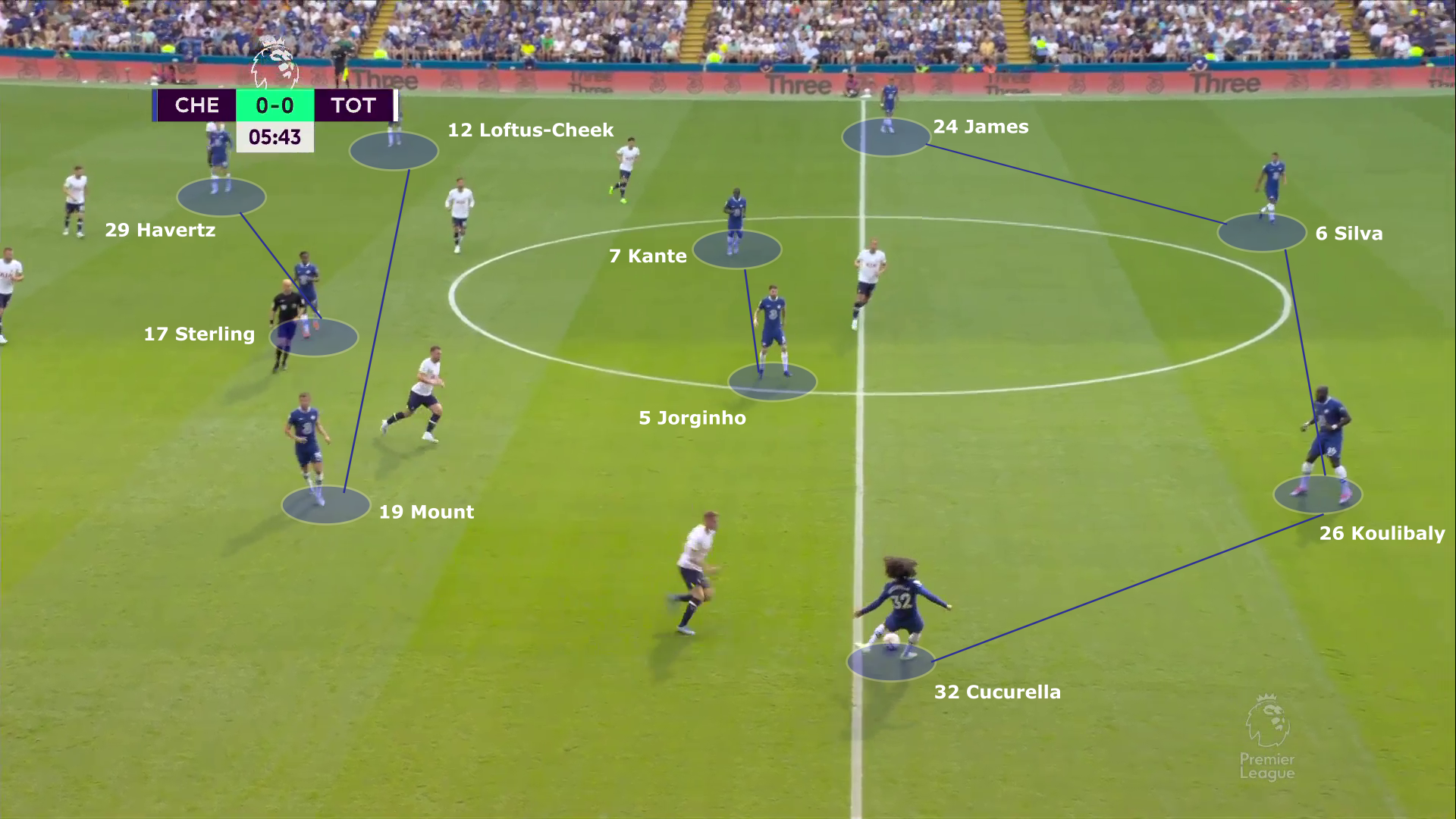 Chelsea displayed a high level of fluidity and tactical adaptability to quickly shift between the two systems and be able to dominate their opponent.

The 4-2-2-2 created a box shape between Chelsea’s two 6’s and two 8’s while also forming triangles out wide with James and Cucurella on either side. This set-up gave the Blues a 4v2 advantage in the middle of the pitch leaving Tottenham’s double pivot trapped. Spurs defended in a 5-3-2 higher up the pitch but shifted into more of a 5-4-1 the closer Chelsea got to their goal, with Kulusevski and Son reverting into midfield.

This allowed Chelsea to exploit Spurs with the ball and control them without it. The hosts repeatedly broke the press between wingback and central midfielder.

During Chelsea’s build-up, Mount was the main outlet to collect the ball from his defenders. It was remarkable to see how much space the 23-year-old was afforded. 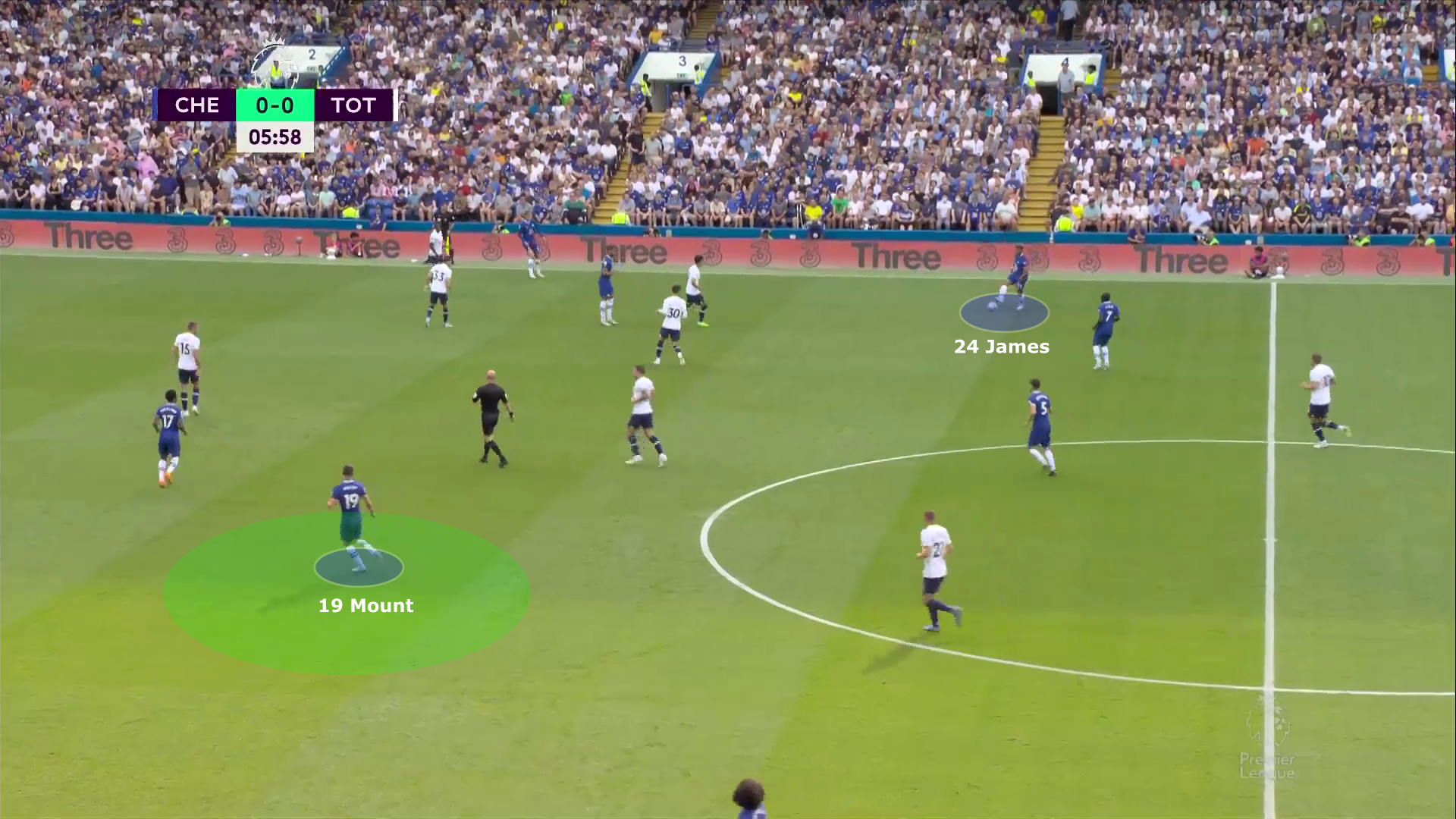 Mount would drop into midfield into the space outside Kante and Jorginho. Sometimes, Romero would be aggressive and follow Mount into midfield, forcing him to play with his back to goal with no space to turn. To counter this, Loftus-Cheek drifted inside, while Sterling and Havertz played as a strike pairing between the three centre-backs.

Now, if Romero jumped out to track Mount, Loftus-Cheek would become the extra man as Davies cannot leave Havertz unmarked. 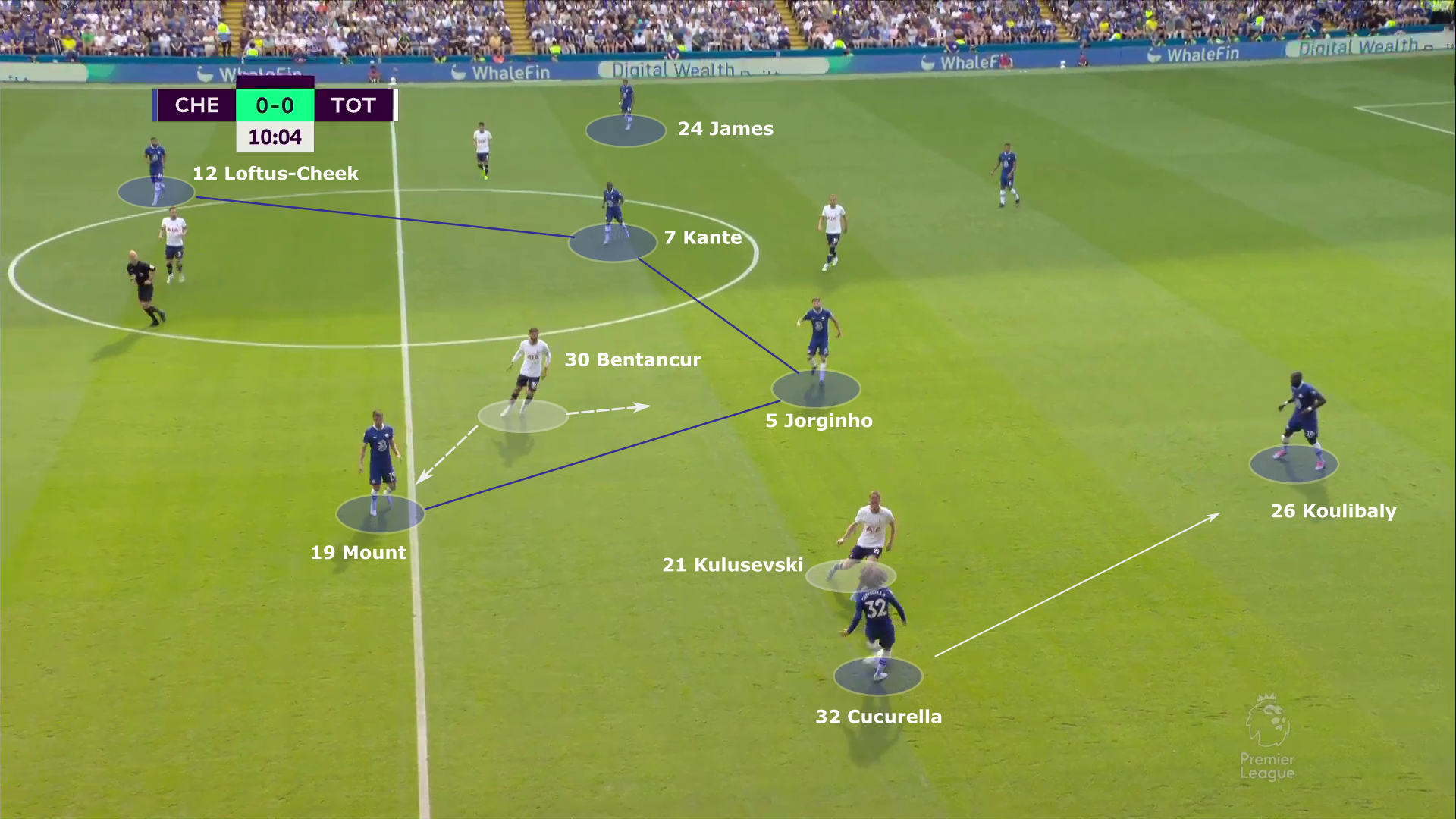 Bentancur and Højbjerg were torn between closing down Chelsea’s 6s or following the 8s as they roamed between the lines.

Koulibaly is under pressure from Kulusevski. Emerson moves higher towards Cucurella and Bentancur is man-marking Jorginho. Romero is pinned back by Sterling. This leaves Mount completely free between the lines. Notice how Loftus-Cheek is also in space behind Højbjerg. 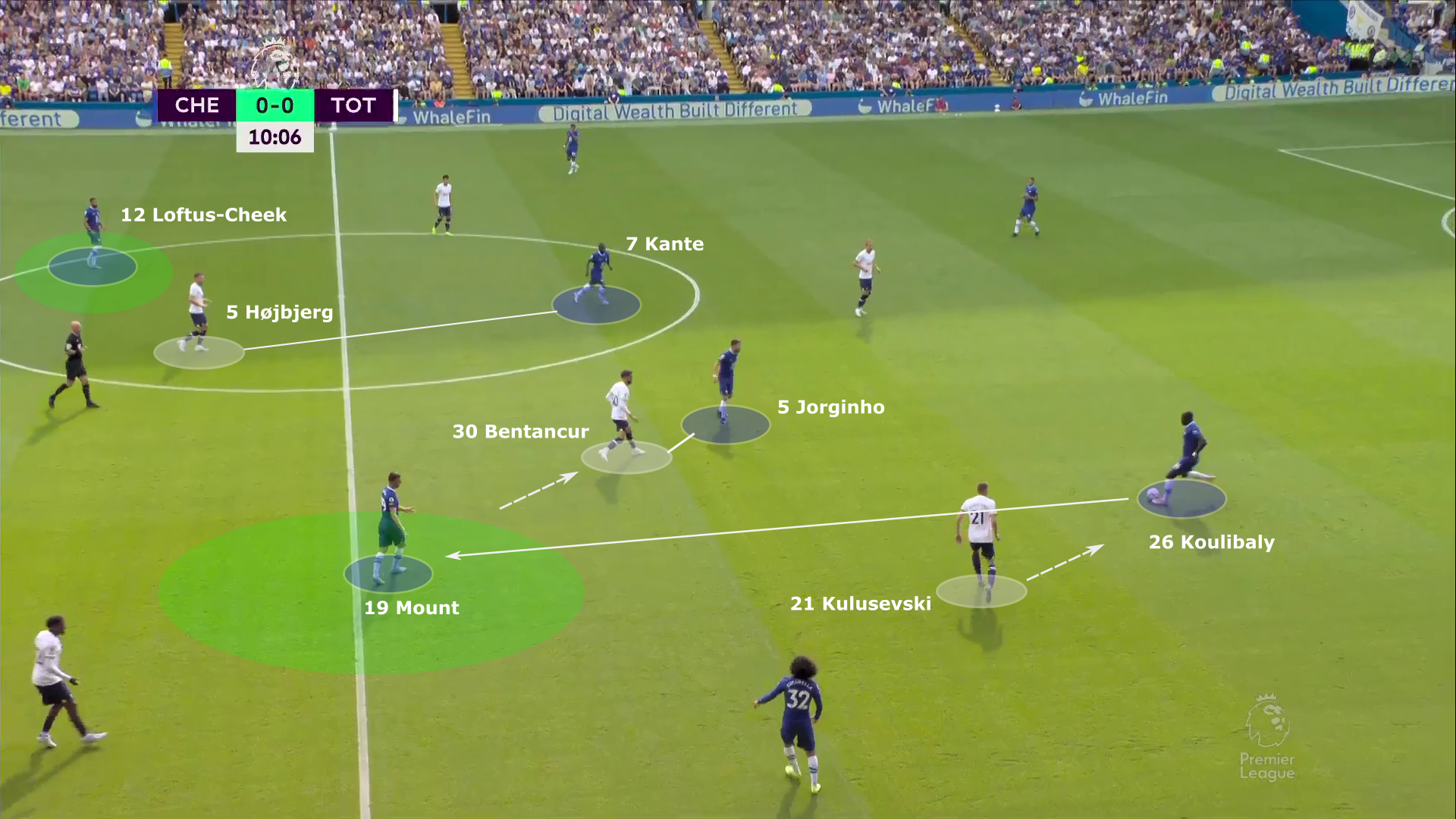 Chelsea’s play around Tottenham’s second line was key to their dominance of possession, with the pairings of Mount and Cucurella on the left, and James and Loftus-Cheek on the right, linking effectively.

Seeing the midfield become overloaded, Conte altered his press and dropped deeper. Son and Kulusevski dropped back, hoping to close down the balls into Chelsea’s 8s, using their cover shadows. But Mount’s smart movement and positioning meant that he was always in areas where he could be targeted. 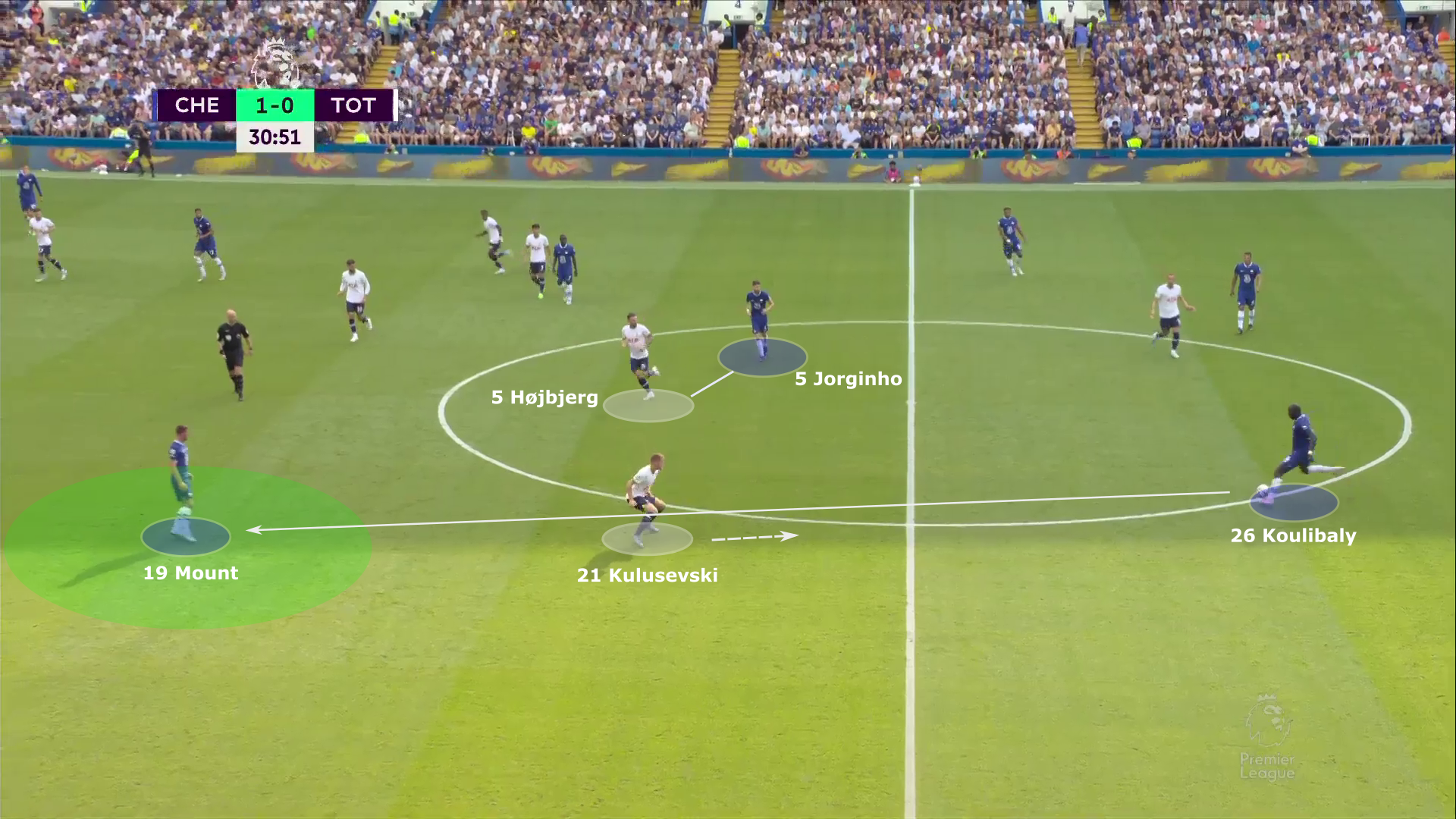 He turns and can run into the space with options ahead of him. Notice how Sterling and Havertz pin back the Spurs centre-backs. 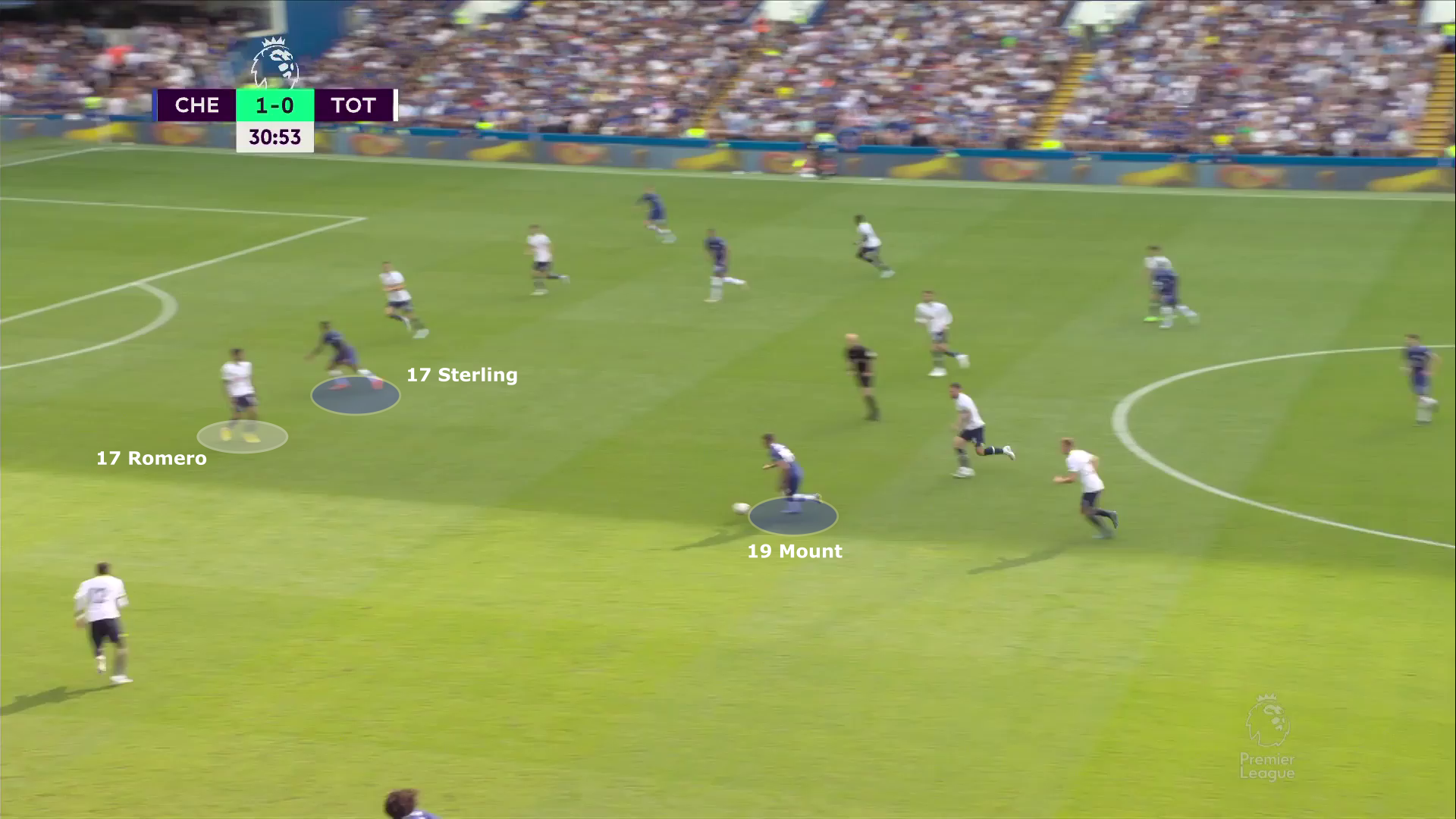 While neither Sterling nor Havertz is a conventional No. 9, having both of them there makes Chelsea unpredictable and harder to defend against.

Loftus-Cheek produced a versatile tactical performance. His positioning in the right half-spaces attracted defenders and enabled the opportunity for James to attack the wide areas. Across the entire match, James had the most passes attempted, 72, and completed 66. In the final third, his totals were 25 and 23.

Runs in behind from Sterling and Havertz increased the distance between Tottenham’s three centre-backs and the second line. Sessegnon and Emerson struggled to deal with the distances they had to cover to get out and engage the ball-carrier when play was spread out wide. 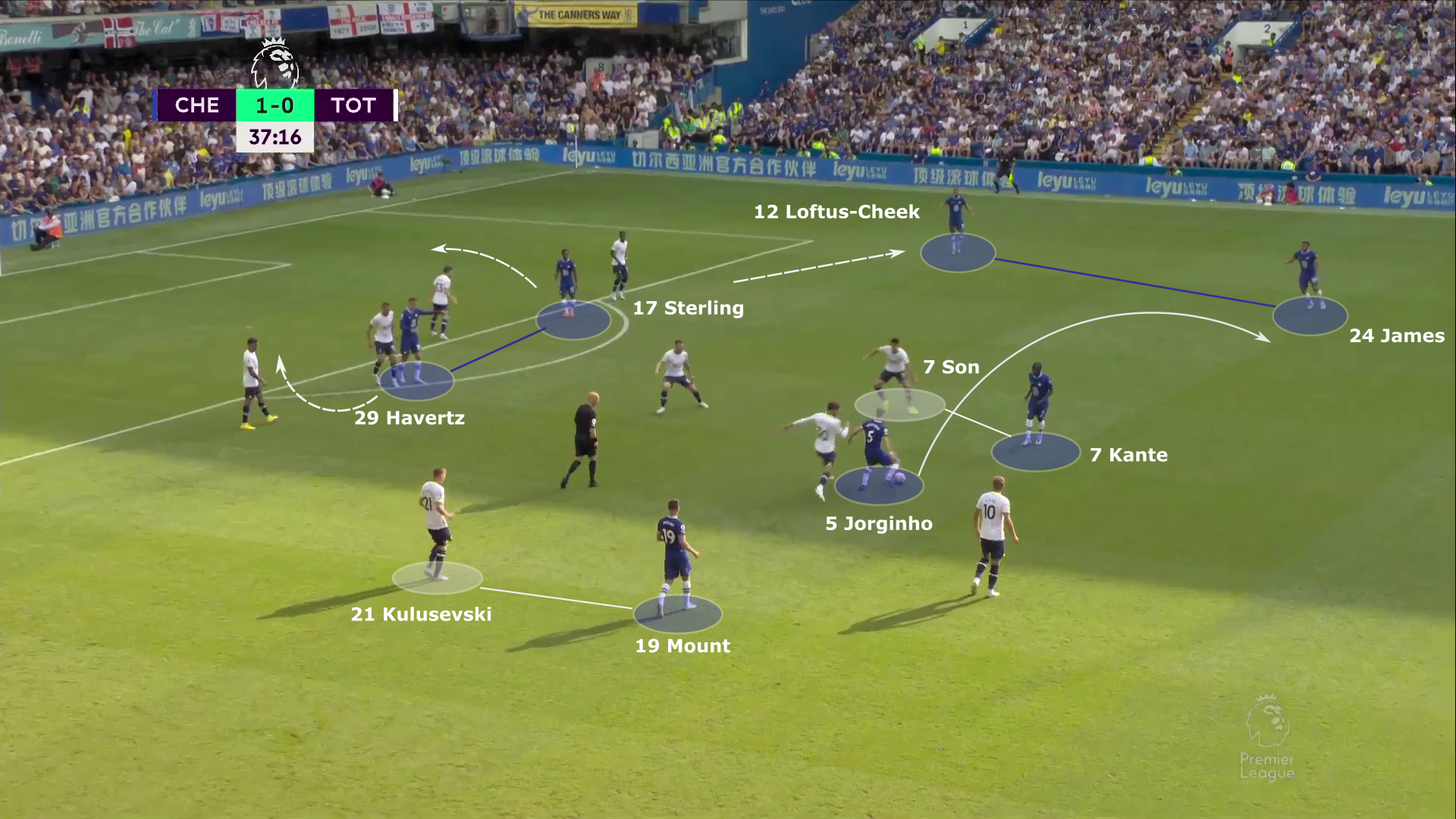 Chelsea controlled the middle of the pitch keeping Spurs trapped in their defensive third for the majority of the first half.

The below pass network shows the positional closeness between Loftus-Cheek (12), James (24) and Kante (7). It also displays how territorially dominant Chelsea were and how they managed to nullify Tottenham’s threat, especially in the first half.

Chelsea out of possession

The entire game hinged on the off-ball approach that Chelsea adopted. The idea behind the structure is to go largely man for man behind a two-man forward press, allow Spurs possession in deep areas and stop the Spurs front three from getting comfortable control of the ball.

Tottenham set up in their usual 3-4-2-1 attacking shape, with Kane often dropping deep to receive the ball or drifting into the inside right channel. Son would also invert and take up positions in the central areas. Against Spurs’ attacking structure and system, Tuchel knew he had to defend with five at the back to contain Tottenham’s threats.

Mount moved back to form a midfield three while Jorginho was tasked with picking up any extra man, patrolling the space.

Conte aimed to isolate Sessegnon with an out-of-position Loftus-Cheek. 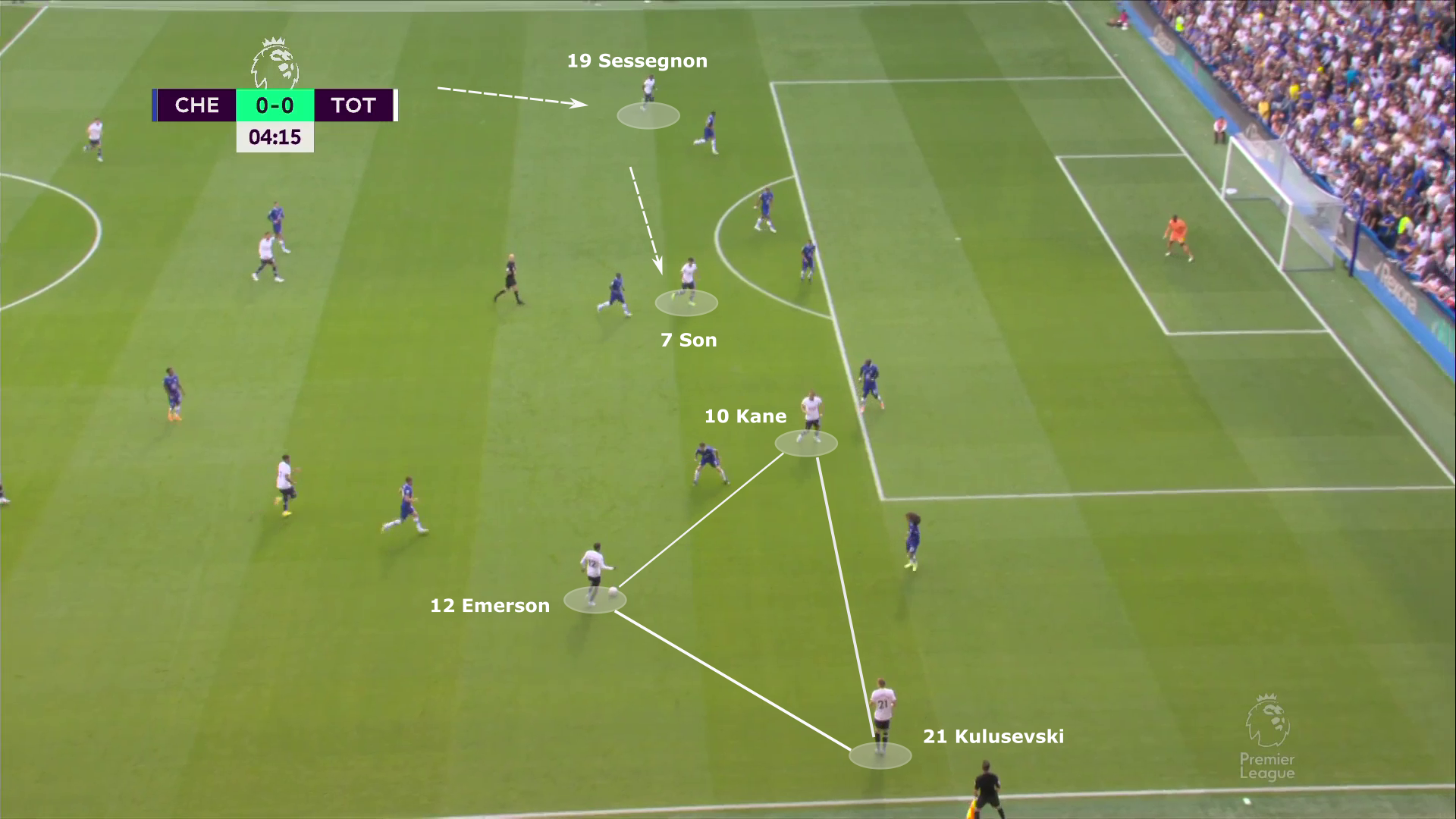 The constant pressure Chelsea applied when the pass was played out from the back to the Spurs midfield was sensational. The organization and work rate were top-notch. Spurs struggled to break through Chelsea’s press and failed to initially test their out-of-possession back five.

The two forward pressers, Sterling and Havertz, covered the outside centre-backs, allowing Dier to have unpressured possession. Kante and Mount acted as man markers on the two Spurs midfielders. 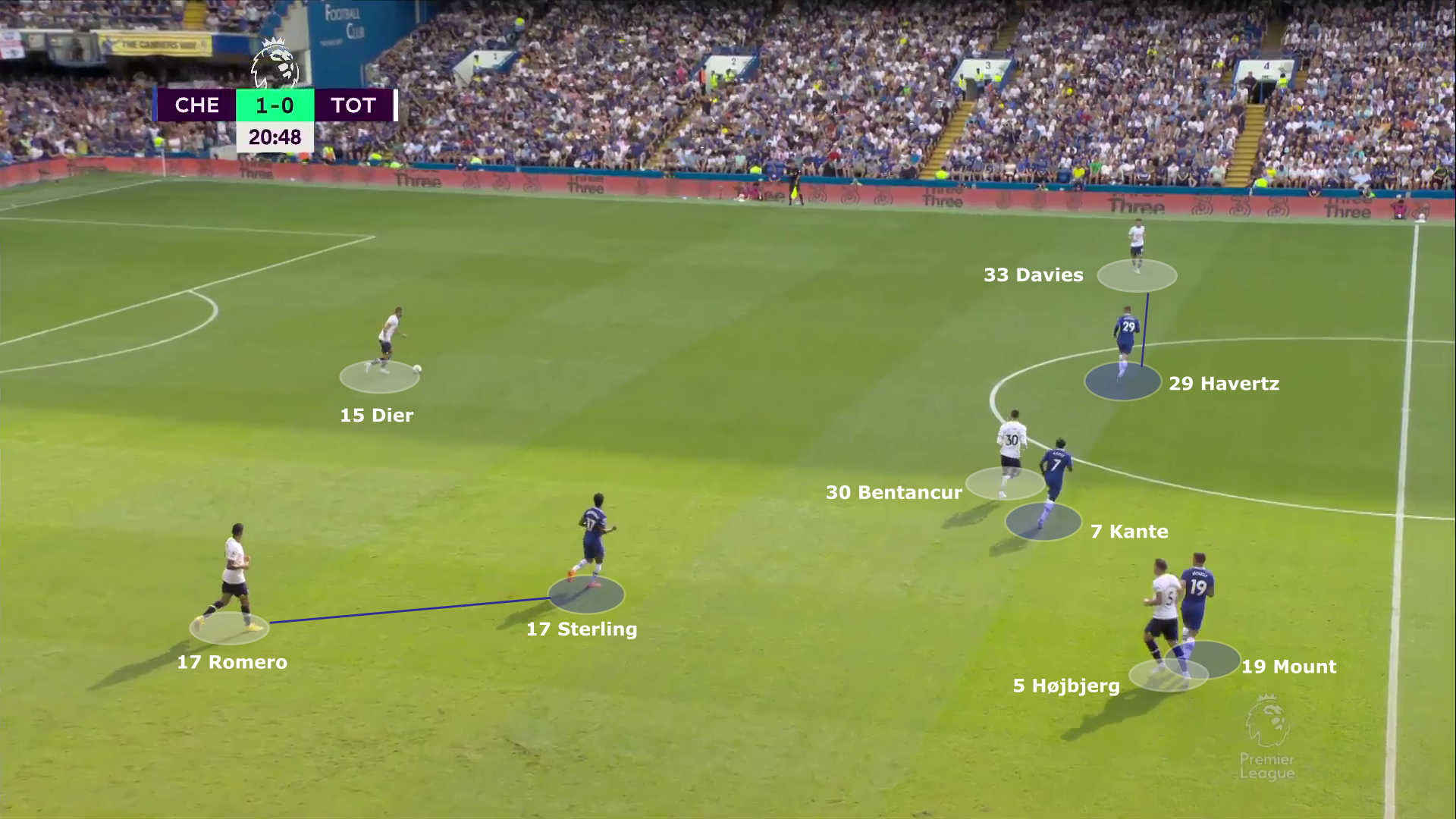 Dier has the time and freedom to hold the ball, but Chelsea’s tight marking means his options are limited. Højbjerg was dropping into the back line to lose his marker and try and shift Chelsea’s block. Rather than Mount pushing up with his man, he holds his position and Sterling shifts up to track the Danish midfielder. 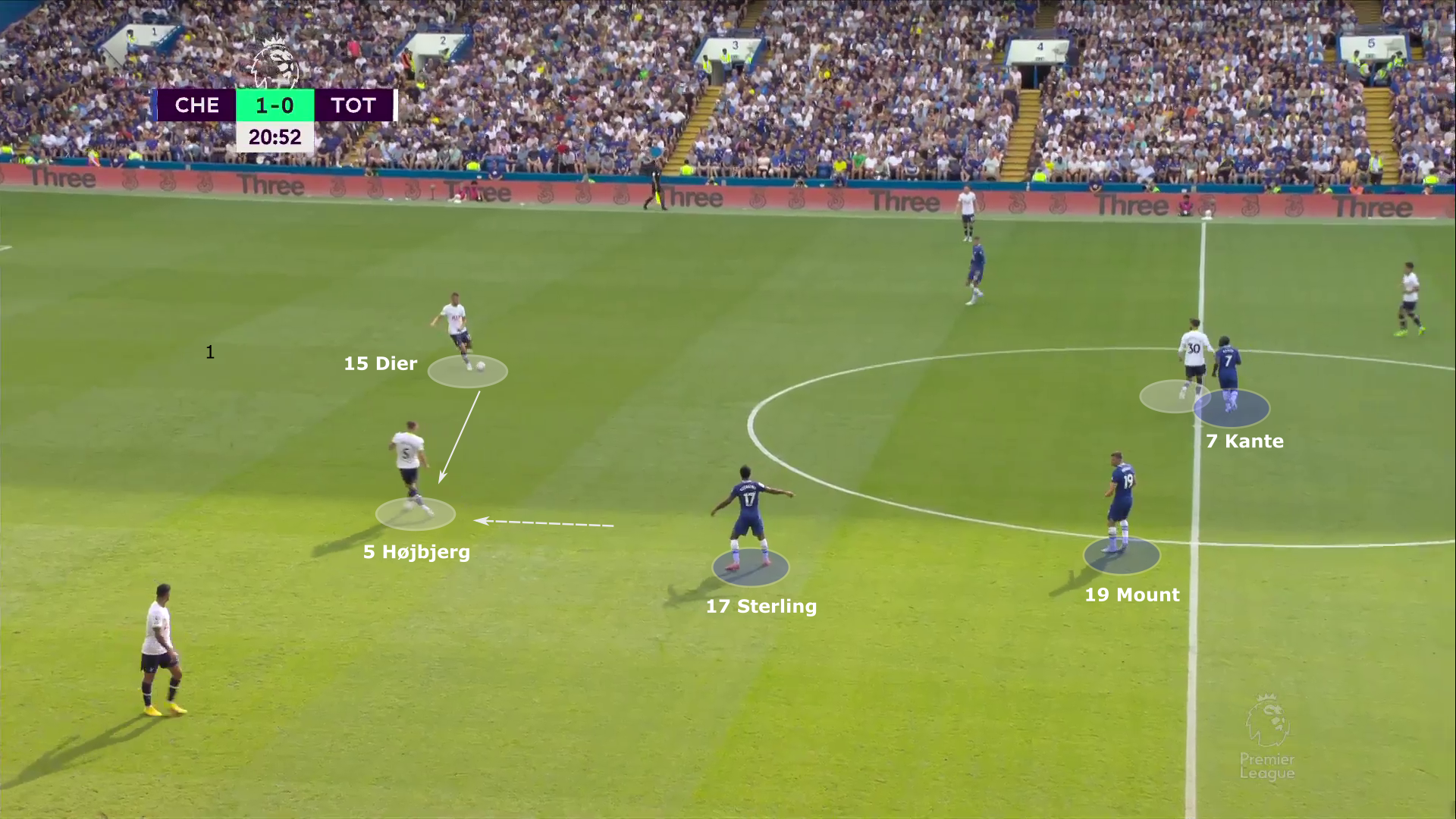 The primary reason behind Chelsea adopting this system and overloading the midfield is to prevent Kulusevski and especially Son to be able to drop between the lines and get a hold of the ball. James’ role as a third centre-back is largely to tightly man-mark Son all around the pitch. 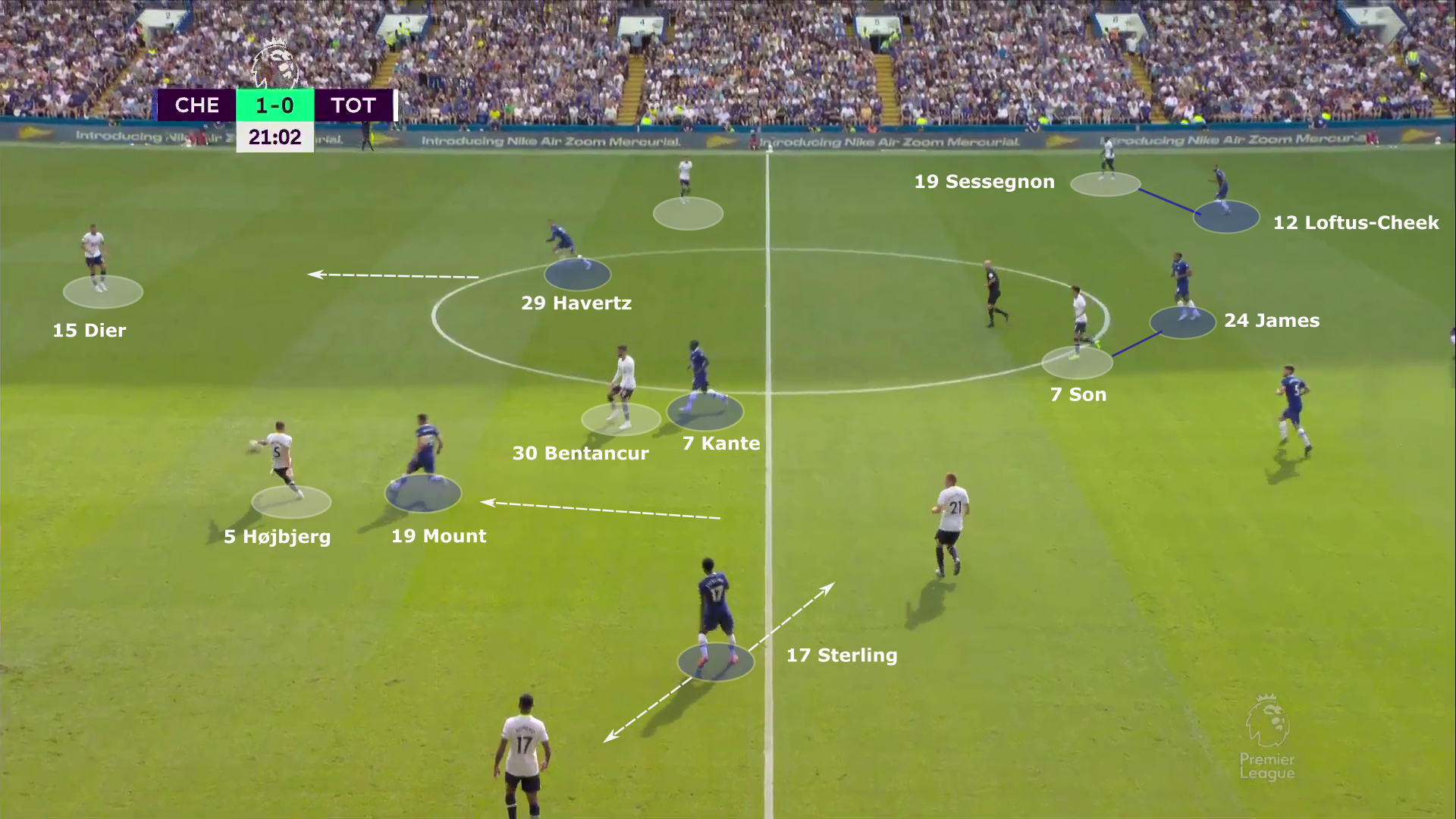 Conte’s approach, to hold the ball at the back, bait opponents in and play the ball through them into his front three was nullified by Tuchel during the first half. Chelsea closed the space for Son or Kane to receive on the half-turn and play in-behind – an attacking pattern that has become synonymous with the duo.

Finding his team 1-0 down, without much-attacking threat, Conte changed to a back four early in the second half as Richarlison replaced Sessegnon. Kulusevski, Son, Richarlison and Kane acted as a rotating front line in a narrow 4-2-2-2 system, with Davies and Emerson now providing the width from the fullback positions. 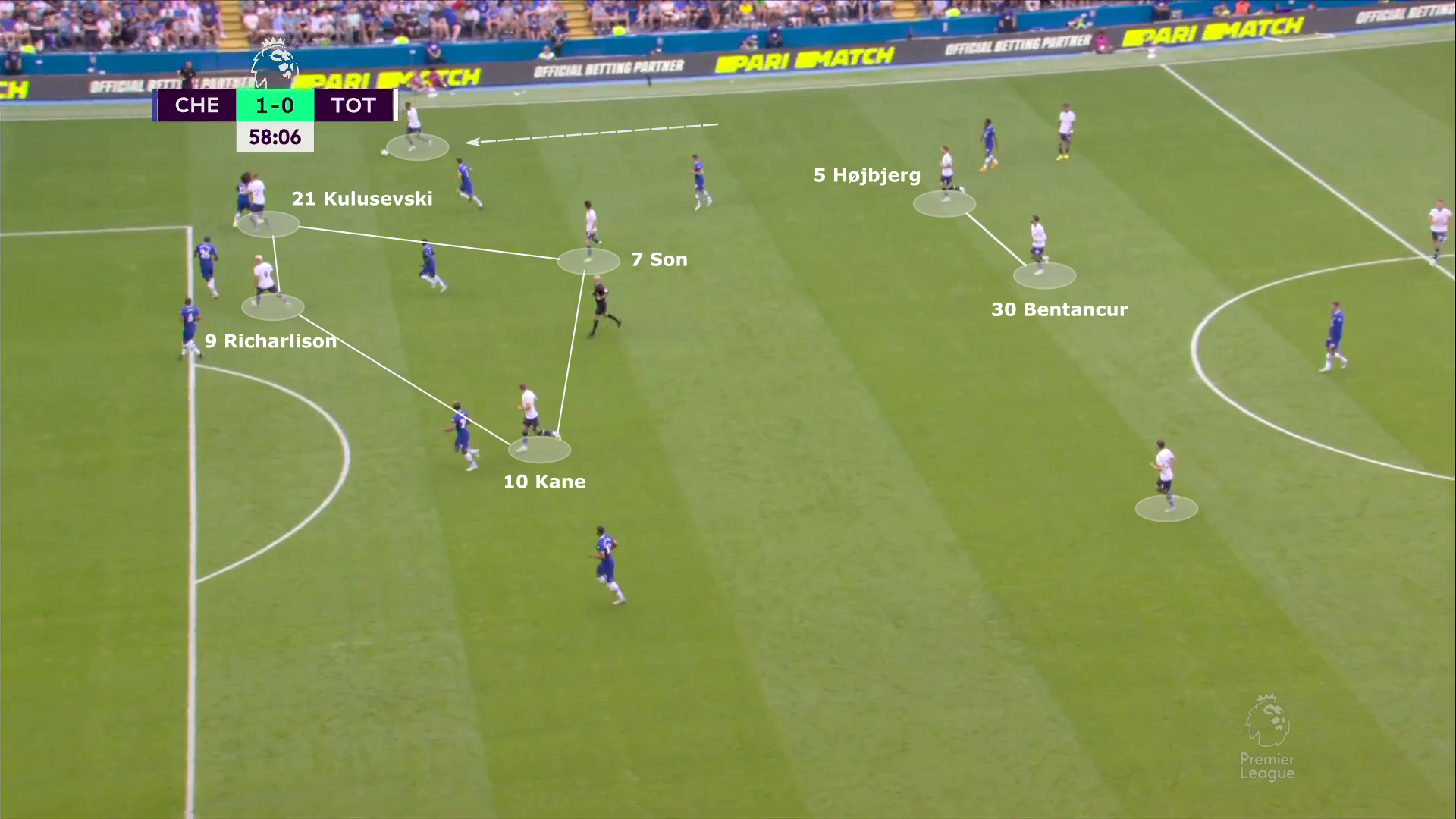 Chelsea’s out-of-possession approach became less effective. Kane and Richarlison caused headaches to the Chelsea back three by making runs in behind, while Kulusevski and Son rotated and dropped deeper together, overloading Chelsea’s midfield. 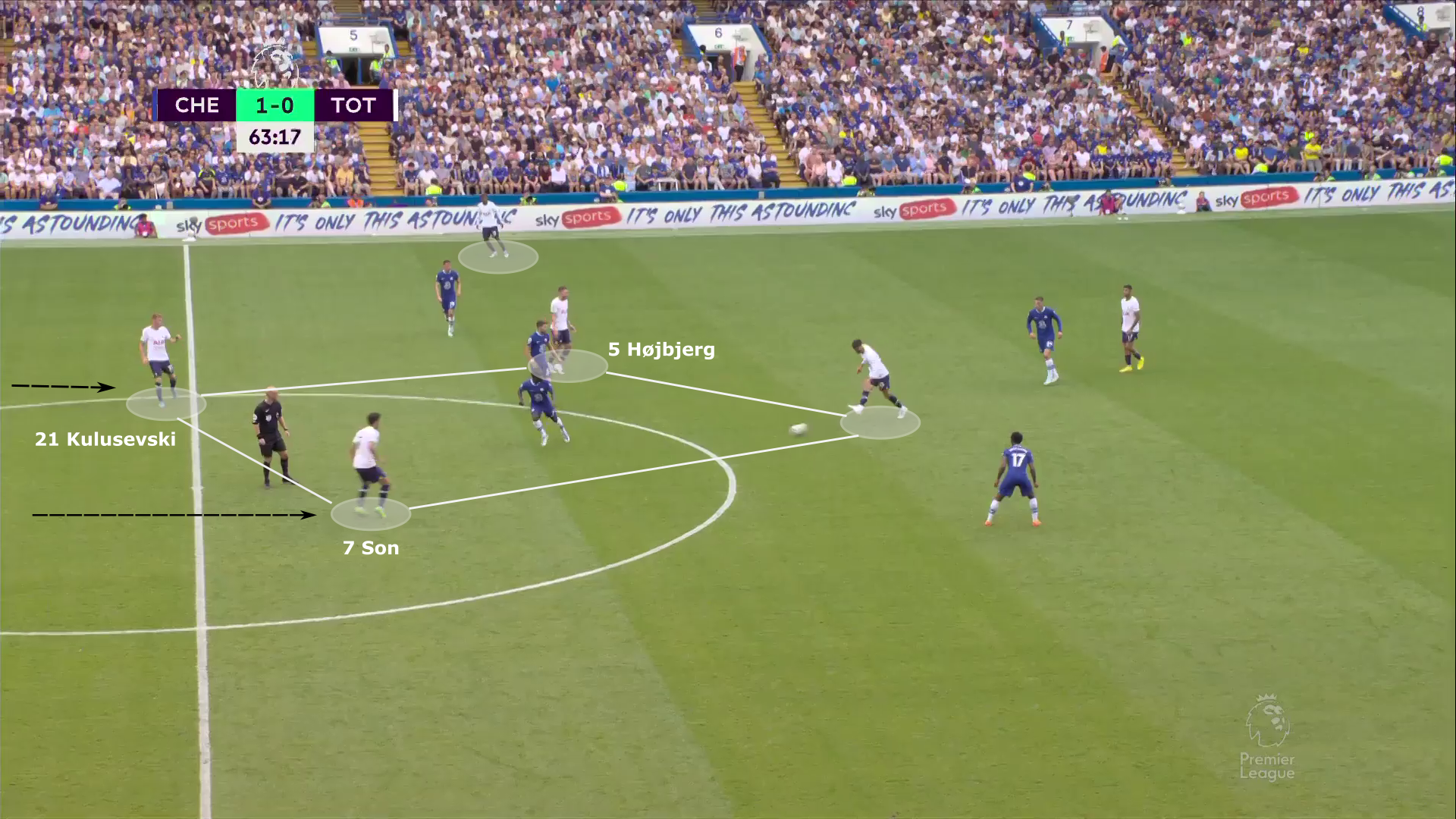 This allowed Spurs to attack with five players, with one of the fullbacks staying in a retreated position depending on the situation. Davies was generally more reserved, to keep hold of Loftus-Cheek’s transitional bursts.

Tottenham’s change to a back four brought them back into the game at 1-1. But Spurs were much more open defensively; new spaces emerged in midfield for Chelsea to exploit. When Chelsea managed to shift the ball away from the congested midfield area, Cucurella and James found themselves in 1v1 situations.

To counter this, Tuchel brought on Azpilicueta for Jorginho and changed to a back five in possession, with James now playing at right wingback. He dragged Davies away from the rest of Tottenham’s back line. With Tottenham now only playing with two centre-backs, Sterling and Havertz had more room to penetrate into. 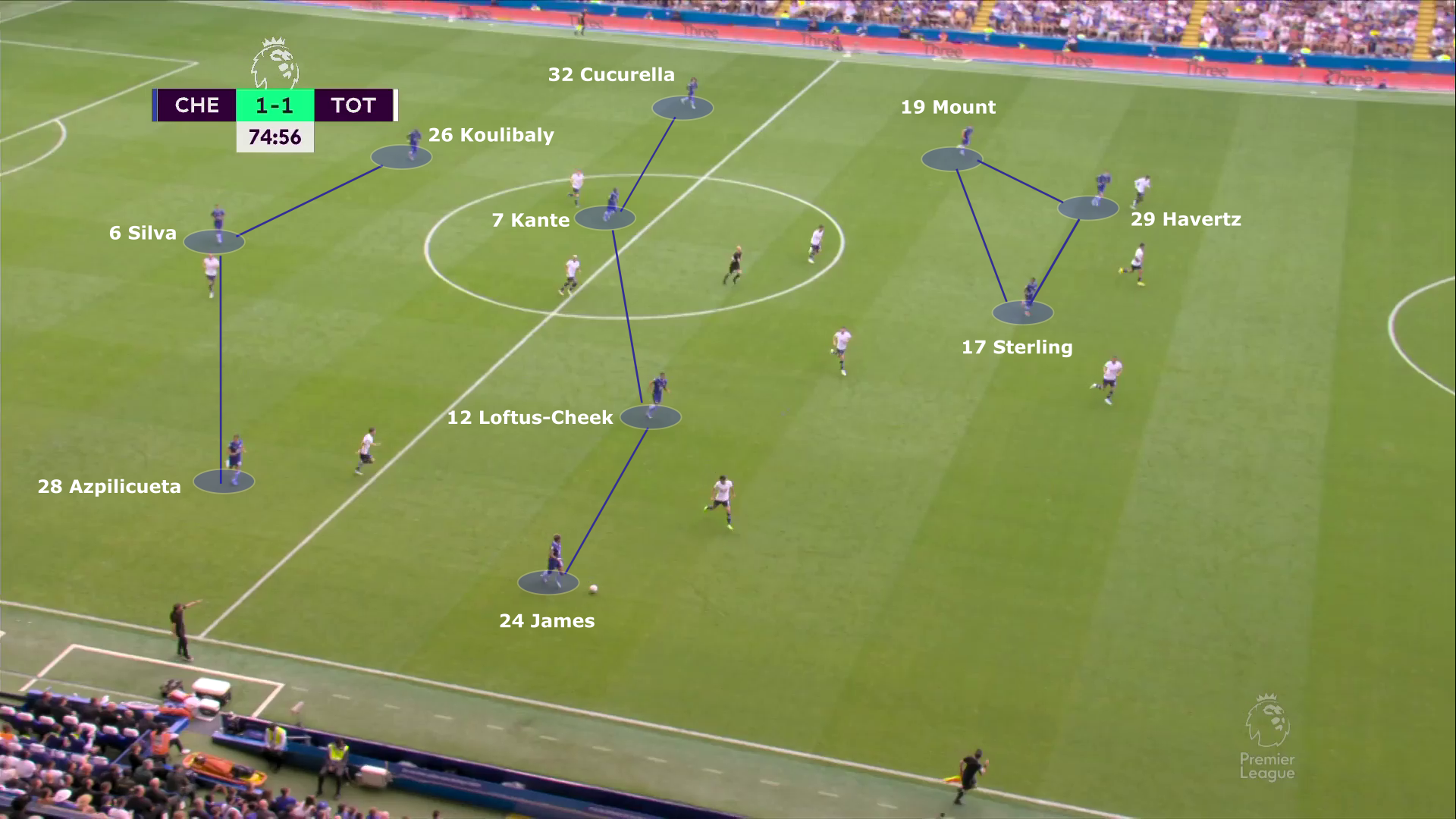 James was suddenly the key player. The change of system meant Chelsea could create overloads on the outside. A few minutes later, the England right-back found the net.

Spurs are in possession on a congested right-hand side. Koulibaly pushes up and Kante supports him in closing down the ball carrier. Notice how there are 8-9 Spurs players on one side of the pitch. 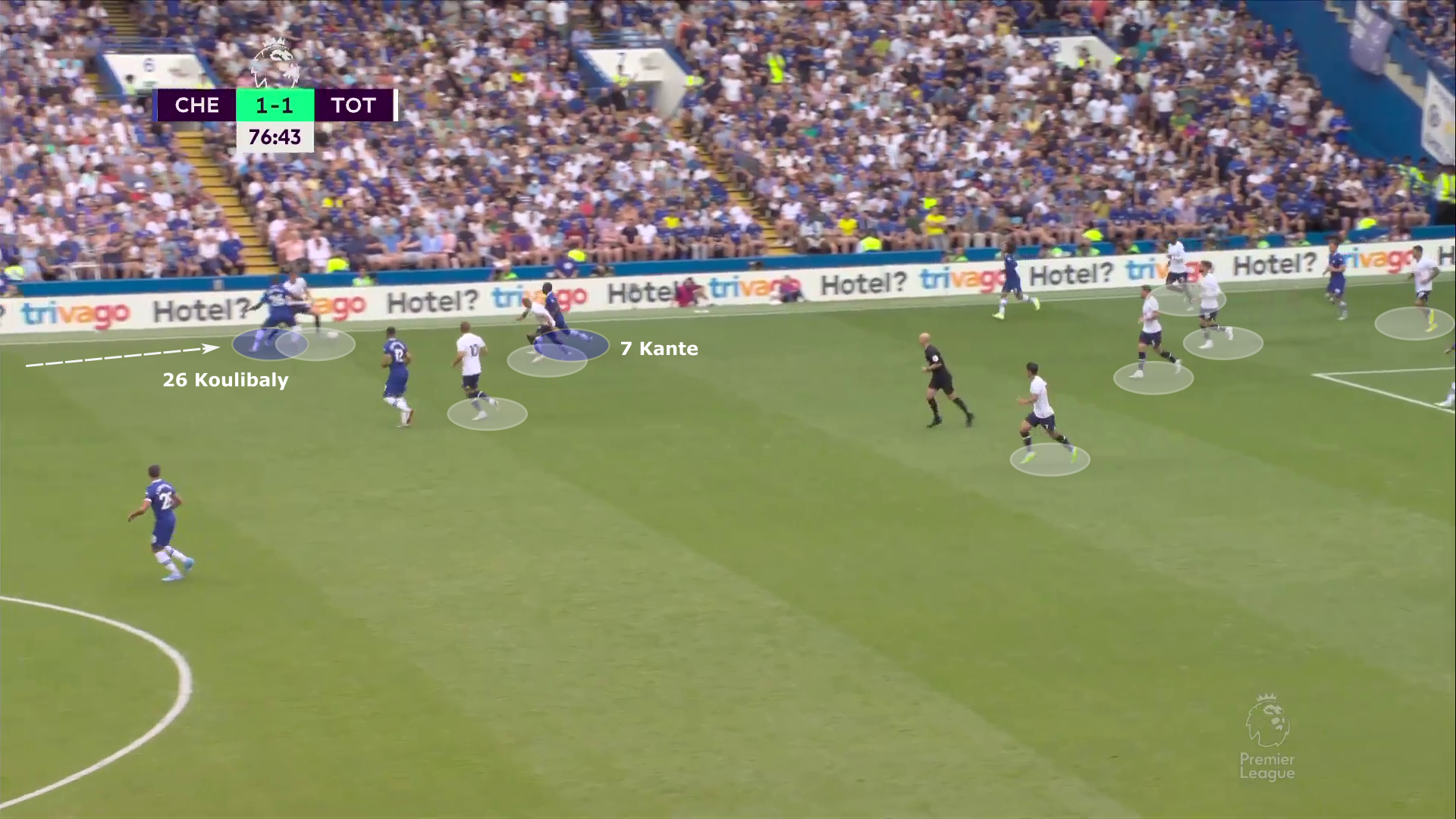 Chelsea purposefully overloaded their left side, knowing that any quick regain of the ball would free up Sterling and James on the opposite side against Davies. Kante swiftly wins the ball back and finds Sterling in the pocket, leaving James at the far post to blast home. This is the classic goal you see when wing-backs are playing up against a back four. 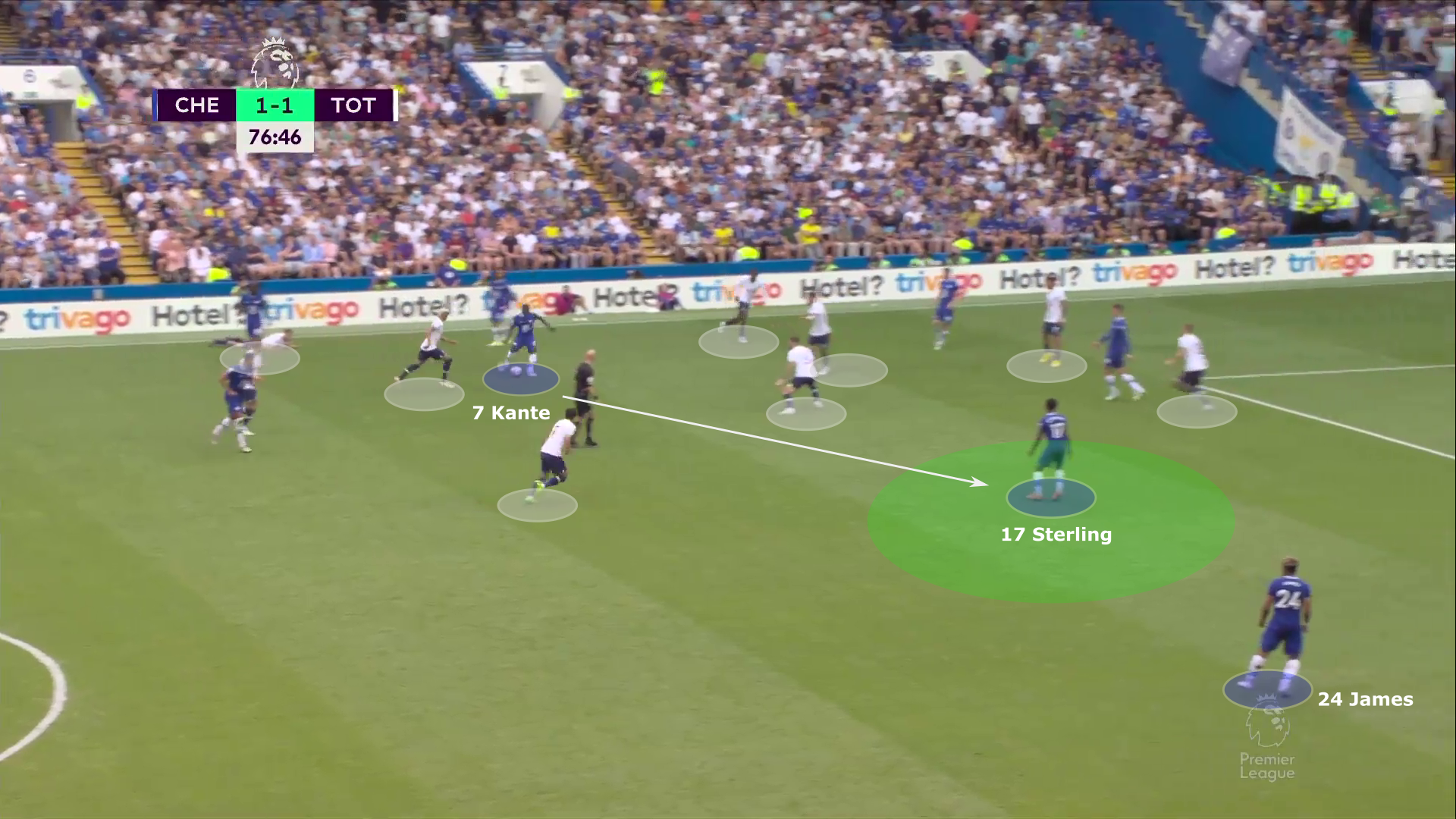 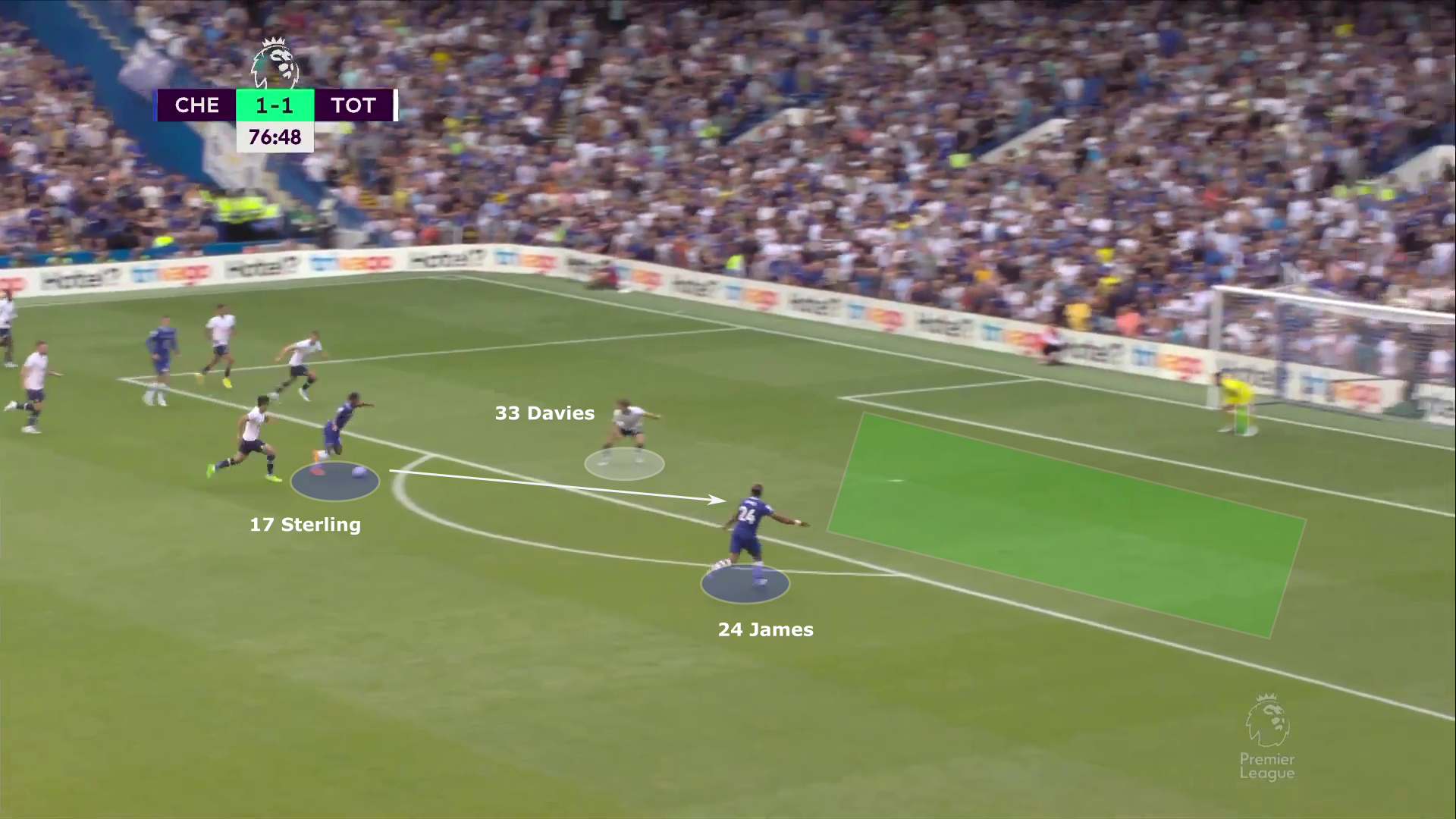 Since the start of last season, James has scored 6 goals, the most goals of any Premier League defender.

Conte ended up reverting to 3-4-3, perhaps afraid Chelsea would cause more problems down the flanks in the closing stages. Eventually, a final spell of Spurs pressure resulted in Harry Kane levelling the scoreline with a last-gasp header.

This game will be remembered for the high level of football, but also for the post-match handshake and brawl between the two men in the dugouts.

Tuchel declared after the game: “The two managers got involved today because both of us were fighting for our teams. That was it. Nobody got insulted, nobody got hurt. We didn’t have a fist fight. So for me, it is not a big deal. It was part of it today and it heated up, but nothing bad. Today, it was part of the game.”

Chelsea will be disappointed not to have come away with the win, especially after their first-half superiority. They were brilliant but failed to convert their dominance into chances and goals. If the Blues play like this all season, they will be harder to predict — and much harder to stop.

Conte’s side demonstrated their determination and grit to grind out results. Since the Italian’s appointment in November 2021, Spurs have scored five 90+ minute goals and have gained 15 points from losing positions, placing them second in both metrics in the league.

The Spurs boss was adamant not to make it three defeats in a row against his former club.

“You can understand about these celebrations because of the feeling about us and Chelsea for this game. This game is important for both clubs. For me, it was important because to lose three games in a row against the same coach, I don’t like.” stated Conte.