The first game of Group E will be played tonight between Canada and Cameroon in the FIFA Women’s World Cup. Canada, ranked fifth in the official FIFA Women’s World Rankings, are clear favourites over Cameroon, ranked 46th. This tactical preview will provide an analysis of how we expect the game to pan out.

A few weeks ago Canada confirmed that both Erin McLeod and Diana Matheson were ruled out of the World Cup through injuries. Canada will miss backup goalkeeper McLeod but her absence won’t alter Canada’s starting eleven. Neither player has played for Canada since returning from another injury in February. Matheson and McLeod’s experience will be missed in the Canada camp, with the duo sharing 321 international caps combined.

At the time of writing there appears to be no major injuries reported for the Indomitable Lionesses. The team will need to be at full fitness if they want to challenge team Canada, who have a squad mixed with both youth and experience.

As discussed in our FREE FIFA Women’s World Cup Magazine, Canada’s formation can vary depending on the opponent. On many occasions, Canada have set up with a variant of three or five at the back. Utilizing attacking wingbacks, Canada aim to overwhelm their opponents in the midfield while maintaining solidity while defending. More recently, however, Canada have dabbled between a 4-4-2 and 4-2-3-1.

In their last two games, against Mexico and Spain, Canada have set up in a 4-4-2. Even within these two isolated games, players have rotated positions. One constant throughout these matches has been the presence of Christine Sinclair up top. Cameroon, on the other hand, line up in a variant of the 4-3-3. This formation can switch into a 4-2-1-3 or a 4-2-3-1 throughout the match.

Anybody who knows Canada Soccer knows who Christine Sinclair is. Sinclair has 281 international caps and 181 international goals. The Canadian captain will be partaking in her fifth FIFA Women’s World Cup in France and will be a key player for Kenneth Heiner-Møller’s side. She consistently pops up with goals and assists for Canada, making her an obvious threat to Cameroon.

Cameroon’s captain, Christine Maine, will hope to keep Sinclair quite with her centre-back partner Estelle Johnson. The biggest issue for the Cameroonian defenders will be Sinclair’s physical dominance. Sinclair (5 ft 9 in) is both strong and pacey, a player who replicates the likes of Zlatan Ibrahimović in her style of play. Maine (5 ft 3 in) and Johnson (5 ft 6 in) will struggle to deal with her height, especially if Canada play direct, as they have in the past. In the following image, we can see Sophie Schmidt playing the direct ball to Sinclair, something Canada looked to do often in this particular game. 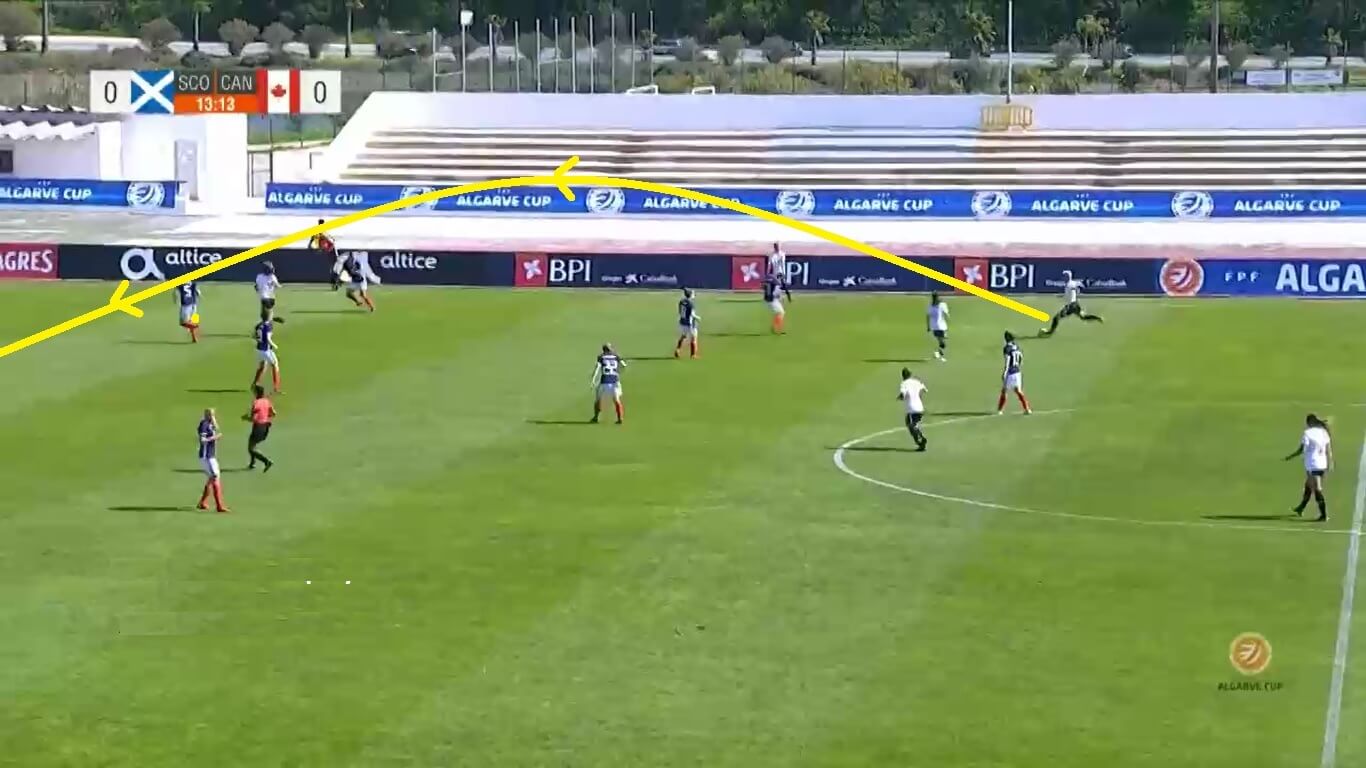 If Canada play with two strikers, Cameroon may rely on a central midfielder playing more reserved to prevent an isolated two vs two on their defensive line. If Cameroon can shut down Sinclair, they may have a chance at stopping Canada, but don’t be surprised to see the likes of Sophie Schmidt playing balls from deep into Sinclair.

Cameroon’s reliance on attacking fullbacks could alter the way Canada play. When Canada played with three at the back, it left them vulnerable to counter-attacks down the flanks. But Canada’s wide fullbacks did well to get back, especially with the defensive coverage of three centre-backs.

Considering they have strayed away from playing three at the back in recent games, it seems unlikely that head coach Kenneth Heiner-Møller will revert back to a 3-5-2. But if he does, it could provide serious problems for Cameroon. 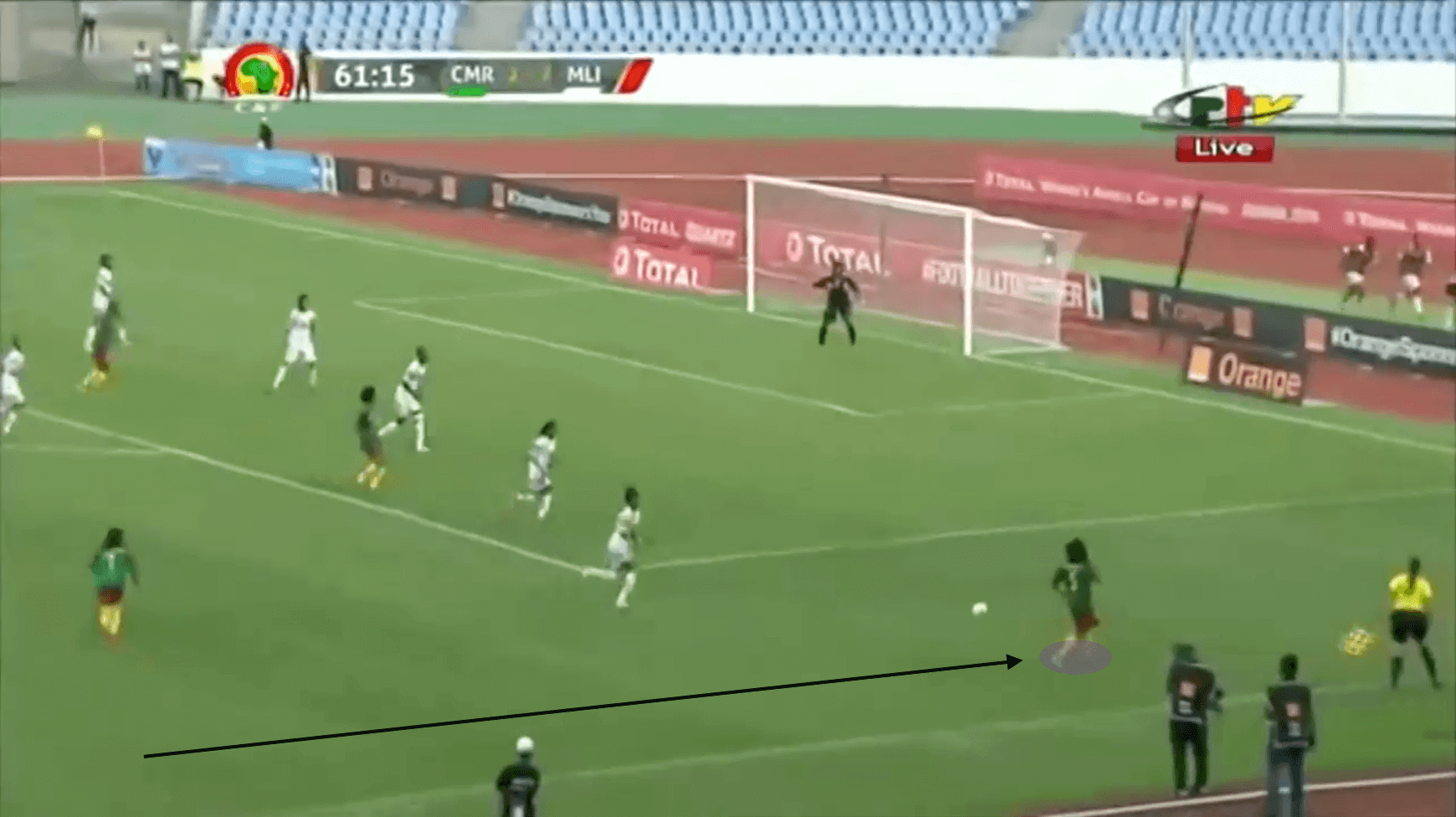 In the above image, we see Cameroonian fullback Augustine Silvia Ejangue exploiting Mali’s wide areas. We will explore how Cameroon can utilize this tactic offensively later in the analysis, but for now, I will focus on where it leaves them vulnerable.

On the counter, Mali were able to exploit these areas offensively, as per the image below. If Canada’s fullbacks are able to attack this free space. With Sinclair lurking in the middle, crosses into the box could become a serious problem for Cameroon’s defenders. 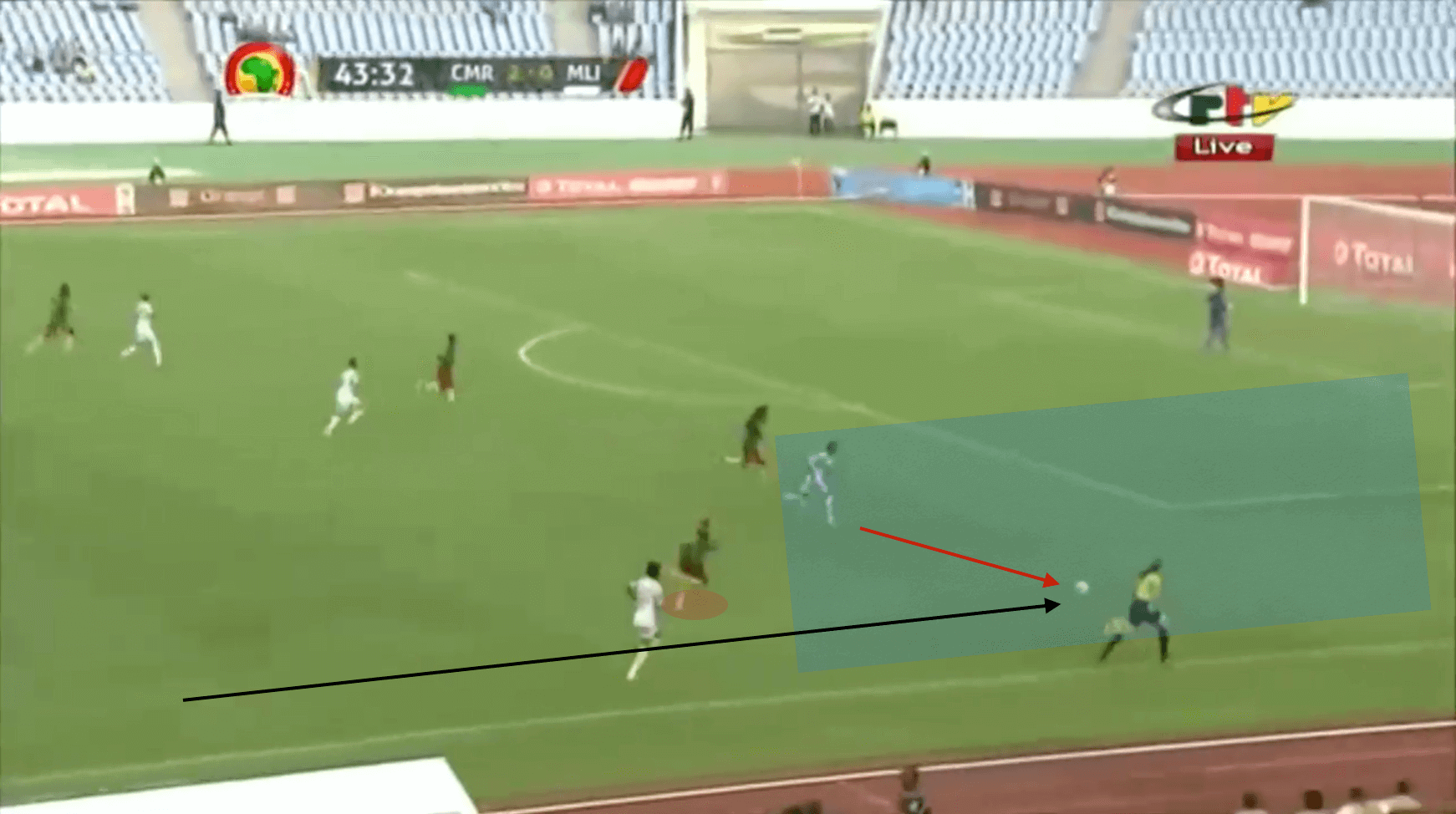 But with two strikers up top and high playing fullbacks, Canada’s counter press would prevent any build up down the wings from happening. If Cameroon win possession of the ball, Canada would revert to a back five, assuming their counter press failed. This would provide width in Canada’s defence. Assuming Cameroon committed both their fullbacks to the attack, it would leave their centre-back pairing isolated with Christine Sinclair and her striking partner.

As stated earlier, I don’t think Canada will revert back to a 3-5-2, but I wouldn’t be surprised if they do either. Their familiarity with it could give them the edge over Cameroon tactically.

Tactically, most scenarios seem to lead to a Canadian win, however, Cameroon’s Gabrielle Onguéné could be their glimmer of hope. There is no surprise she featured as Cameroon’s star player in our FIFA Women’s World Cup Magazine. Her blistering pace and clinical goalscoring helped Cameroon achieve it’s best World Cup finish ever back in 2015.

But unlike Christine Sinclair, Onguéné is only 5 ft 0 in. Canada’s Kadeisha Buchanan (5 ft 7 in) and Shelina Zadorsky (5 ft 8 in) will have to rely on their physical advantage when dealing with Onguéné. If Cameroon’s midfield can play that crucial pass, there may be no catching up with her.

In this match, I expect head coach Alain Djeumfa to start his star player out wide, to pin back the Canadian fullbacks who like to get high. With the amount of possession I expect Canada to have during the game, Cameroon’s biggest chances will come directly from Onguéné on the counter-attack.

We can see an example of Canada’s vulnerability from wide areas in their 2018 CONCACAF match against USA. The following scenario showcases USA attacking the empty space left by Canada’s high pressing fullbacks. A dangerous ball into the highlighted area is poorly cleared and Rose Lavelle places the ball into the bottom corner from the just outside the 18-yard box. 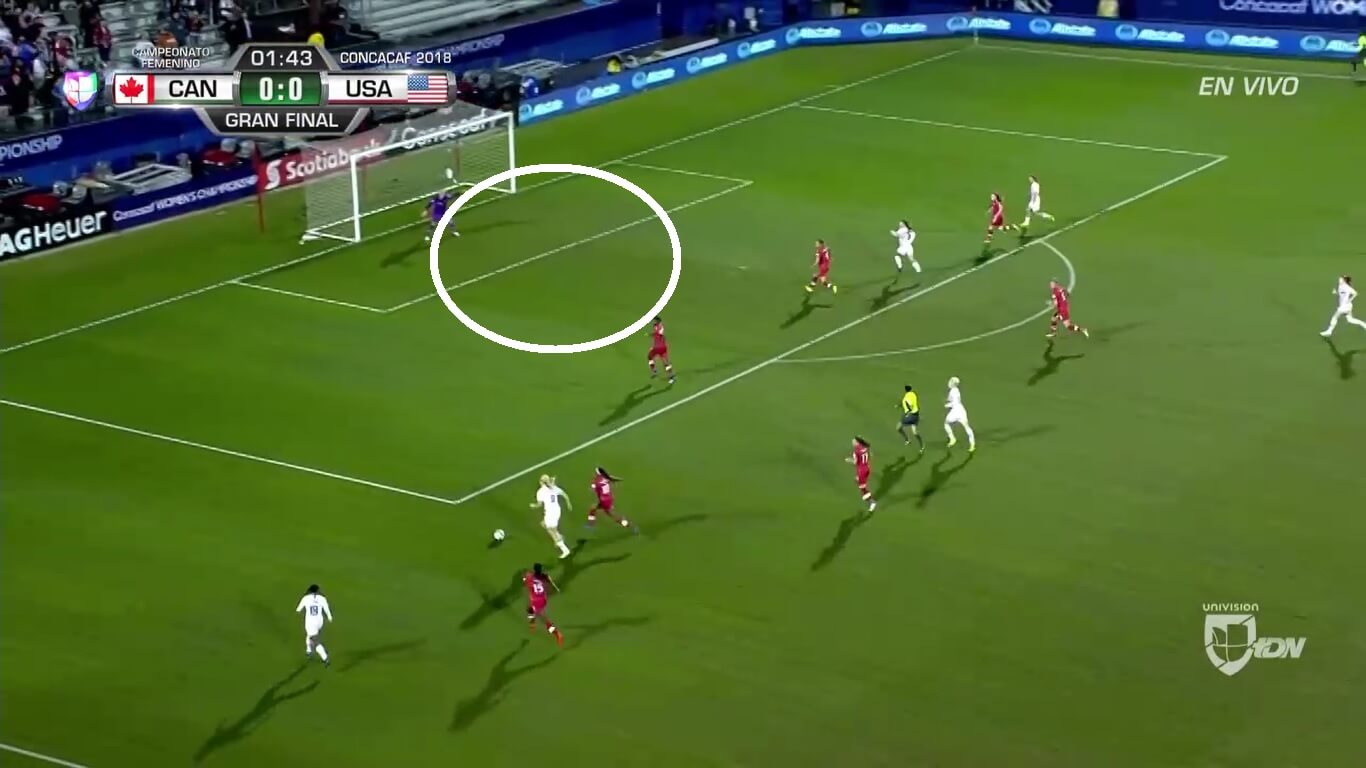 Cameroon can manipulate similar situations to this. Whether Onguéné is attacking the wide areas or attacking the space behind the defenders, it is an area of opportunity for the underdogs.

This game should be an easy win for Canada, but anything can happen at the World Cup. If Cameroon’s Gabrielle Onguene comes ready to play, she could knick a goal against Kenneth Heiner-Møller’s ladies. Even then, captain Christine Maine and her back four will have to prevent the likes of Christine Sinclair from scoring.

This game is hard to call as Canada’s line up can be unpredictable, but the quality and experience of the Canadian Women, who are historically much more experienced than the Canada Men’s National Team, should be enough to earn themselves the win. I’m calling this game Canada 4 – 1 Cameroon.