At the Women’s World Cup, the battles have started in Group C too, where Australia met with Italy. In that group, Australia and Brazil are the favourites thus Italy had to face a big challenge right from the beginning. The game folded out as an interesting clash where Australia grabbed the lead but then failed to increase the advantage and Italy made the comeback in the second half. At first, they equalised, then both sides had chances to win, but it looked like the game would end with a fair draw. However, Italy did not give up and scored in the last minute and recorded a highly important victory.

This tactical analysis will investigate some crucial elements of the game.

On paper, Australia lined up in a 4-1-4-1 formation, although it had some tweaks. Nevertheless, Samantha Kerr played as a lone striker with an important role in the attack. Chloe Logarzo and Hayley Raso were in the wings. Caitlin Foord and Tameka Yallop (Butt) in the middle and Emily van Egmond in behind them. In the defensive line, Ellie Carpenter, Clare Polkinghorne, Alanna Kennedy and Stephanie Catley played.

In possession they structured into a 4-2-3-1-ish shape, although Foord often moved next to Kerr and acted as a second striker.

Meanwhile, Milena Bertolini deployed exactly the same team as she did against Switzerland. Furthermore, Italy’s formation was a 4-3-3/4-1-2-1-2. The central defenders were Sara Gama and Elena Linari. The full-backs were Alia Guagni and Valentina Bergamaschi, although the latter one is not a proper defender rather a striker or winger. Manuela Giugliano in the deep-lying player maker role whilst as the eights, Valentina Cernoia and Aurora Galli employed. In the first line, Cristiana Girelli in the middle, and Ilaria Mauro and Barbara Bonansea in the two sides.

Tactical analysis of the first half

Australia took a more active role and dominant side in terms of possessing the ball and attacking more. For example, they had two chances in the first few minutes through early crosses towards Kerr whose dangerous headers were a constant threat.

Italy looked to control the game without the ball and searched for those moments when they could utilise their speedy attackers, especially Bonansea through a quick counter-attack or pass behind the opposition defence. This almost gave them the lead in the first couple of minutes but the referee neutralised Bonansea’s goal due to offside.

Both sides played in a very direct manner but it had often errors in the play.

One of the most interesting parts of the game was the Italian pressing. They lined up in a 4-3-3/4-1-2-1-2 formation against the ball. Bertolini ordered the team to make the centre inaccessible. In order to this, Bonansea and Mauro occupied close to the centre to block the passing lanes, but they did not press the centre-backs. Girelli dropped a bit centrally and usually positioned in between the opposition midfielders and situationally marked them. Cernoia and Galli provided additional cover behind the first line and shifted to the ball side to mark the nearby opposition midfielders. While Giugliano stayed a bit deeper, in front of the centre-backs and protected the space as a holding midfielder. In addition to that, due to Australia’s high wingers and strikers, the whole of Italy’s last line was pinned back in order to not allow them to support the front players in pressing.

Having said that, there were interesting roles and movements in pressing.

In this instance, we may see how Bonansea moved out to press Carpenter. Both Girelli and Cernoia shifted to the half-space to mark the ball-near midfielder, while the ball-far midfielder covered by Galli.

Moments later, Italy shifted to the right wing. Bonansea moved infield to cover the far central midfielder, while Girelli stuck to the ball-near midfielder. Galli already occupies wide when Kennedy received the pass in order to instantly able to press the opposition full-back. 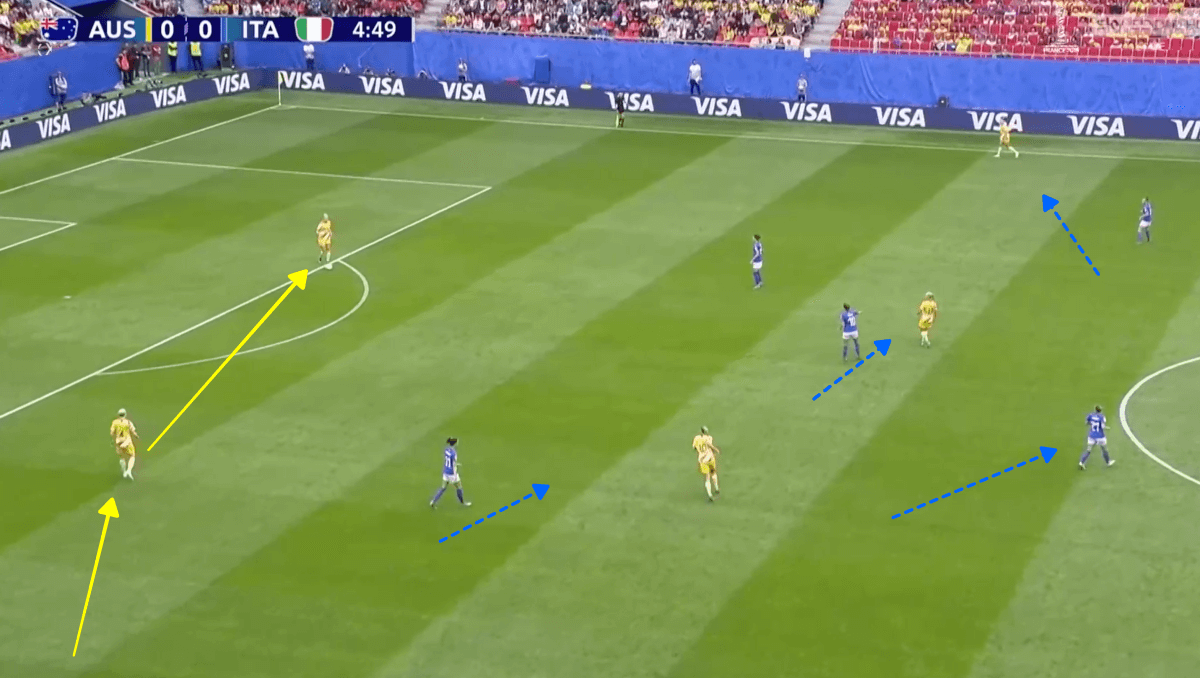 Around the 15th minute, Italy became more aggressive against the ball and started to press the centre-backs, usually when a pass was made between them. After twenty minutes, Italy started to look like a 4-4-2 shape in pressing.

Although Italy were able to disrupt opponent build-up and progression on several occasions, there were flaws. Here, Australia outplayed Italy pressing through their midfielder. Egmond received a pass despite the fairly tight mark on her and laid it off to the full-back. 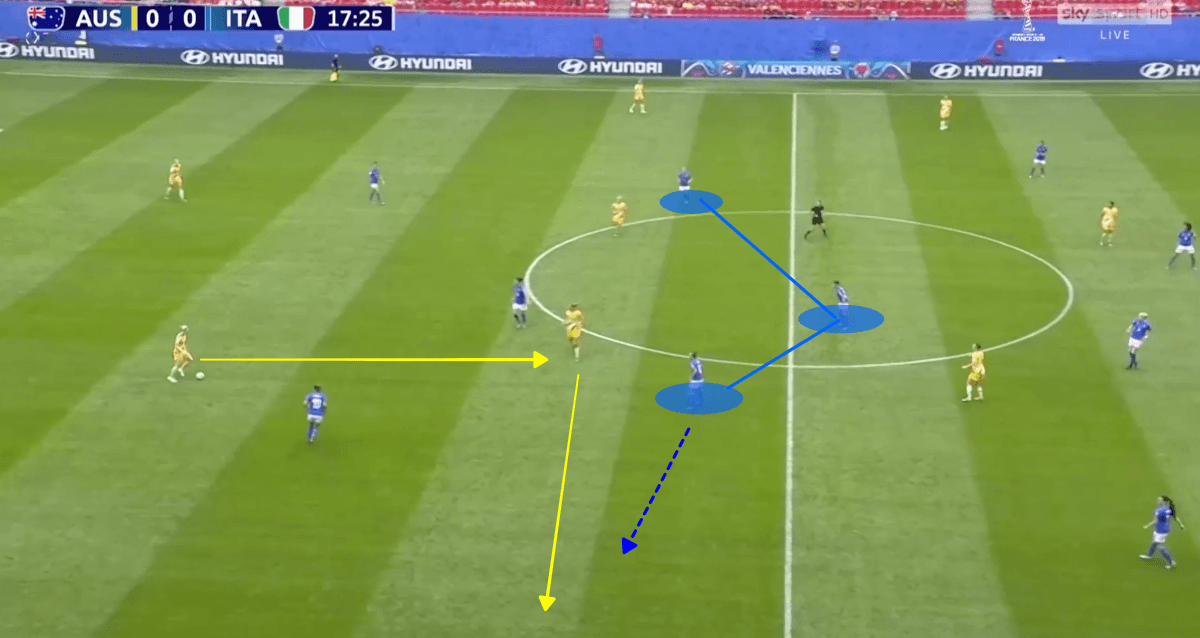 Again, in the situation below, Egmond moves out the cover shadow to receive a pass from the centre-back and play it forward. 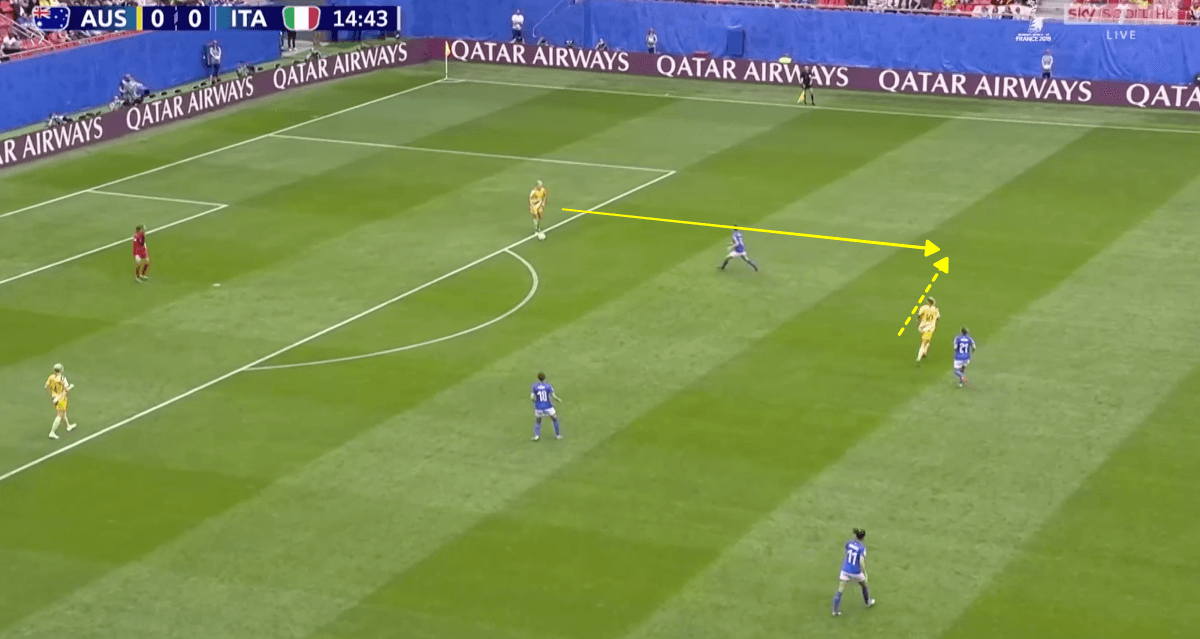 Evidently, Egmond frequently caused issues for Italy, especially after Australia switched to a midfield three. From that point Australia used a 2-1 staggering at the back which was difficult for Italy’s two-man first line to negate. They tried to stay close to each other to prevent passes to Egmond, but once they move out to press the centre-backs the Egmond became free.

For example, in this instance, Australia were able to outplay Italy’s first line of press. Bonansea stayed wider to have access to the full-back and Cernoia deep positioning made difficult to closed down Egmond. Or other perspective, Australia had time to create 3v2 (or 4v2 with the goalkeeper) situation and bypass the opponent’s press.

Cernoia was who always tried to close on Egmond but it was difficult. When she stayed deeper to protect the space the above mentioned issue arose, whilst when she moved out early to mark Egmond the space behind her was exploited. In the instance below, Cernoia was dragged out of her position and Foord dropped into the vacated space to receive a pass from the centre-back. 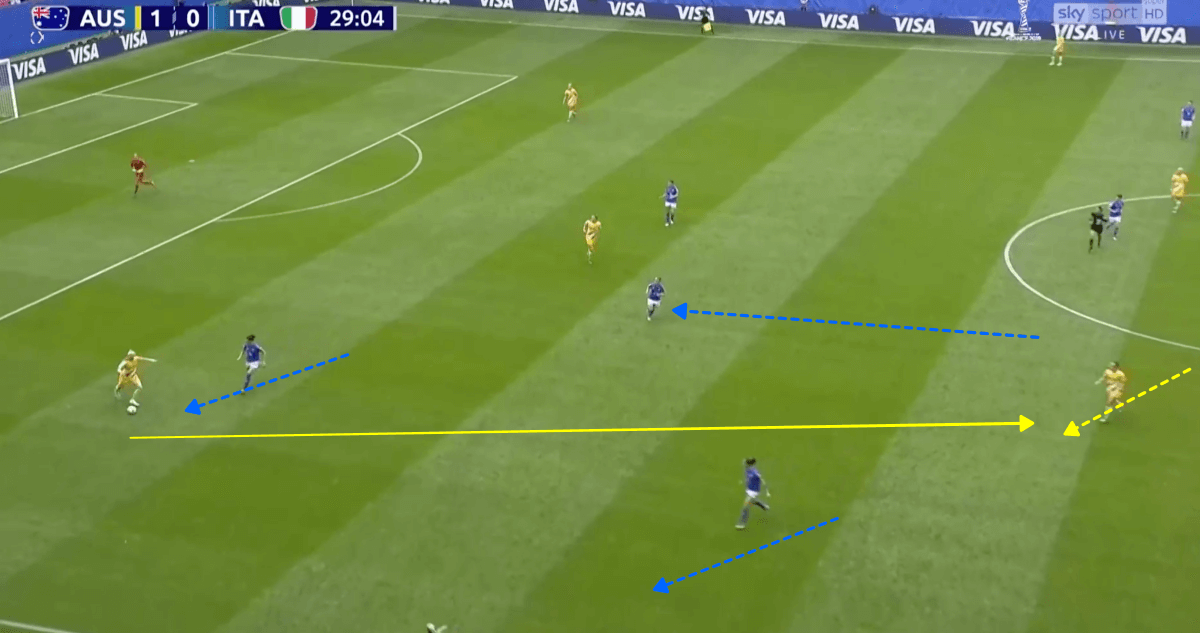 Australia looked to circulate the ball through their back line and advance up on the pitch through their full-back, especially in the right wing, through Carpenter. They used a switch of play which was effective to find space in the far side. Due to the narrow positioning of Bonansea, Carpenter had time to receive the ball and play it forward.

Although they started with a midfielder pair, as the game wore on they switched to a midfield three. Egmond positioned in the centre, in front of the centre-backs, while Yallop pushed to the left half-space and Foord occupied in the right. 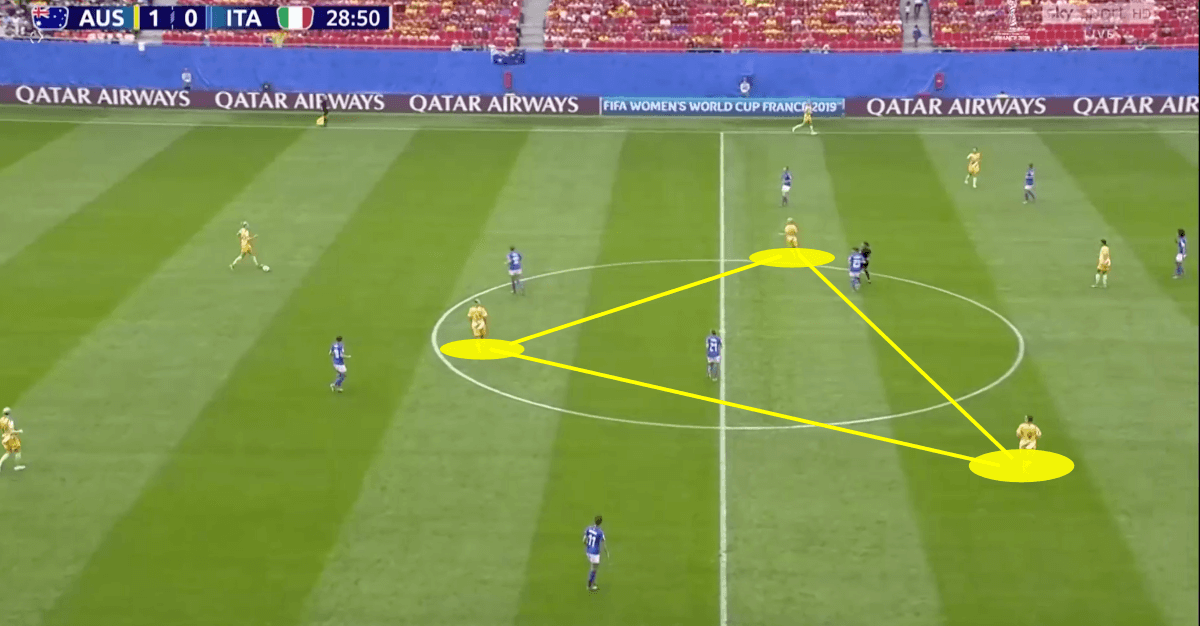 Once Australia outplayed the midfield and progressed to the opposition half, they looked to pass behind the defence. It was a common scene where the full-back tried to pass to the space behind the opposition full-backs, utilising the wingers’ movement towards that space. Or in the instance below, the attackers targeting the channels in the opposition last line. 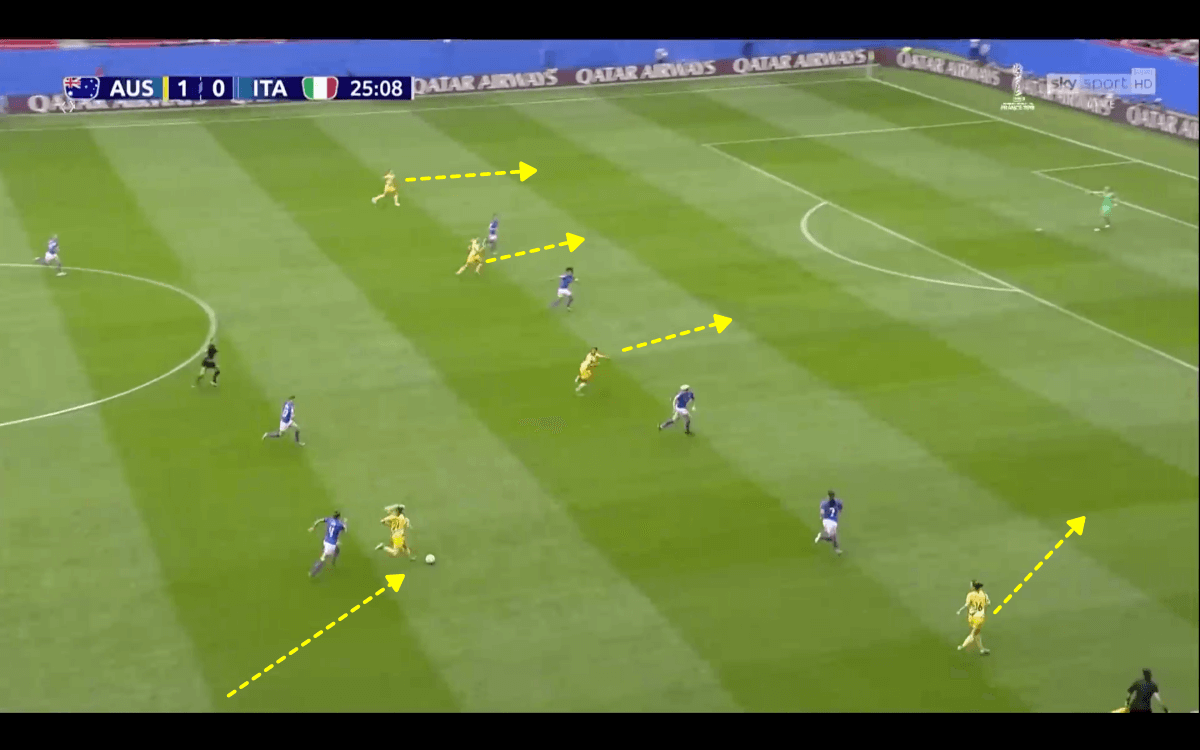 Australia often used the tool of positional rotation to break the opposition defence. One of their patterns was that Carpenter pushed forward next to the touchline and Egmond dropped to the vacated space. With this movement, the winger could move to the half-space. The plan was Italy’s full-back would move out to close down Carpenter and Raso could exploit the vacated space.

Australia has a strong goal to break their quarter-final curse and advance much further in the tournament. Now, with this defeat, they are in a really tough situation as they need to win against Jamaica and might need a victory against Brazil too.

On the other hand, Italy returned to the Women’s World Cup with a good start, although there are still two matches left, this win must give them the confidence to do it and advance to next stages.