It’s here, finally. After being pushed back by a year due to the COVID-19 pandemic, EURO 2020 finally kicks off on Friday night in Rome, where Italy will face Turkey in the opening match, before moving on to the other 10 host cities. The Azzurri have had an extremely impressive time under Roberto Mancini – they are currently on a 26-match unbeaten run, which is the second-longest run in the history of the national side, and arrive at this tournament at that sweet spot where expectations are not too high, but they possess enough talent and are in good enough form to be a contender for the title itself. Turkey are also being spoken about as one of the dark horses of this tournament – Şenol Güneş has assembled one of the youngest sides of the tournament, with experience from the likes of the rejuvenated captain Burak Yılmaz, and they could be a candidate to go far with their blend of youth and experience. Thus, the EURO 2020 opener will lay down an early marker of what we can expect from both these teams, and this tactical preview will aim to break down their potential tactics through our analysis. 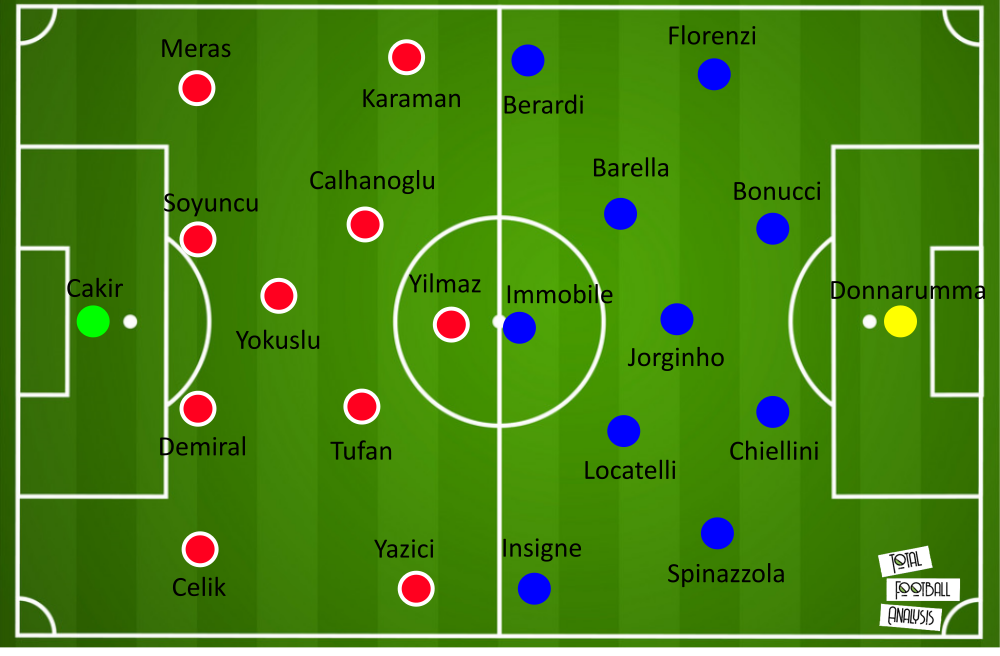 Güneş has a number of exciting and talented options at his disposal, and this is the side we expect him to put out. Lille’s title-winning trio of Yılmaz, Zeki Çelik and Yusuf Yazıcı will all start, while AC Milan’s Hakan Çalhanoğlu will play a big role in terms of the team’s creativity. Okay Yokuşlu will sit back and protect the defence, which will consist of Çelik, Merih Demiral, Çağlar Söyüncü and Umut Meraş, with Ozan Tufan and Çalhanoğlu alongside him, and Yazıcı, Yılmaz and Kenan Karaman as the front three. Uğurcan Çakır will be in goal.

For the Azzurri, Gianluigi Donnarumma will start in goal, with a back four of Alessandro Florenzi, Leonardo Bonucci, Giorgio Chiellini and Leonardo Spinazzola. Italy have one of the most technically proficient midfields in the entire tournament. However, they do have some injury concerns – Stefano Sensi was ruled out before the start of the tournament, being replaced by Atalanta’s Matteo Pessina, while Lorenzo Pellegrini has also now been injured, with Gaetano Castrovilli as his provisional replacement. On top of this, Marco Verratti is yet to train with the team, so it is unlikely that he will be in this starting XI, so we expect a midfield trio of Jorginho, Nicolò Barella and Manuel Locatelli. Out wide, we expect the Napoli captain Lorenzo Insigne and Sassuolo’s Domenico Berardi to start, with Ciro Immobile leading the line.

While Turkey do have the players to play in a more expansive manner, Güneş is likely to set his side up to play on the counter-attack for this match. Italy have become one of the most possession-dominant sides in Europe under Mancini, and will be very comfortable at keeping possession and moving the ball around quickly. Therefore, Turkey are likely to sit deep and look to frustrate Italy, with Yokuşlu playing a key role between the lines, as the Celta Vigo midfielder will attempt to minimize space and mark players in these zones tightly. 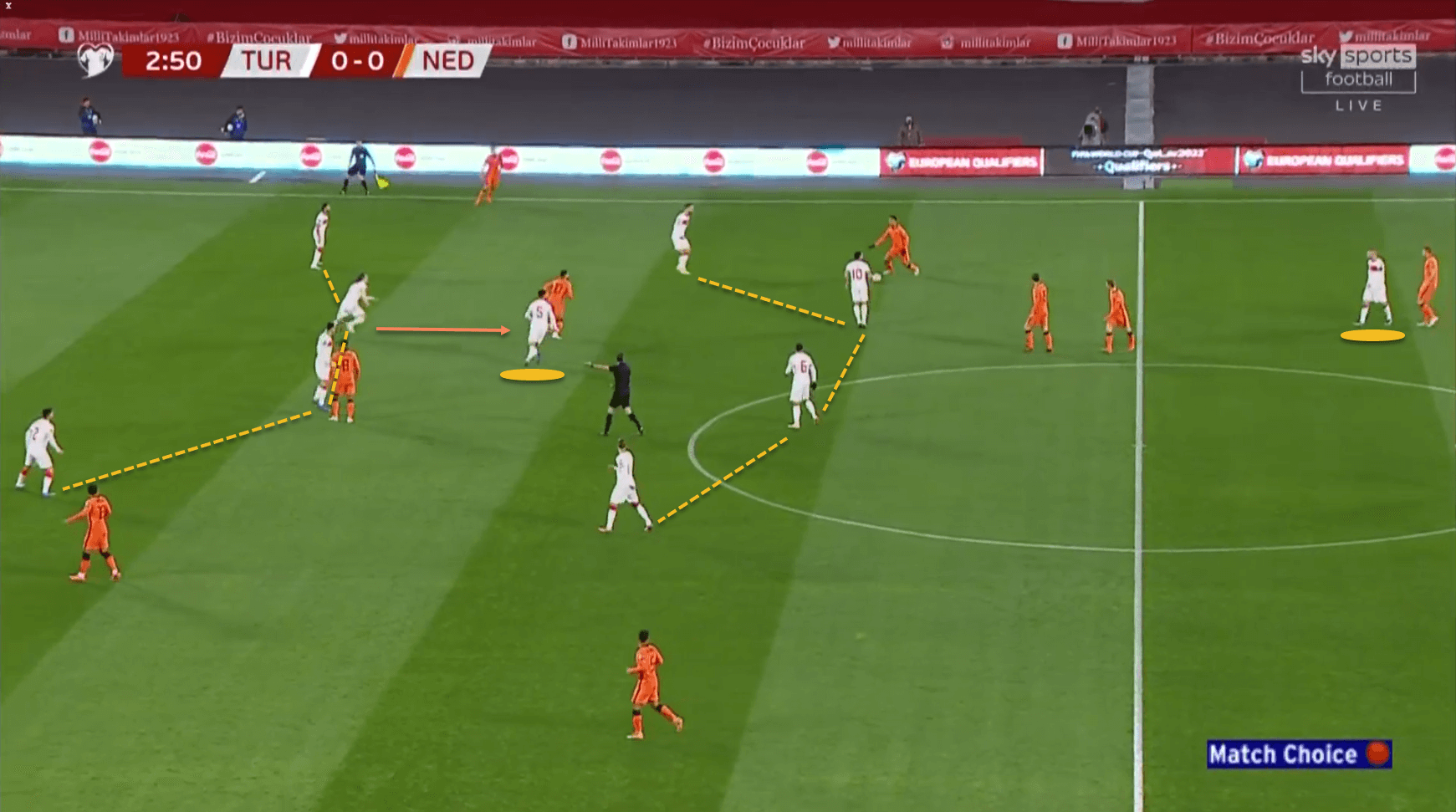 This is the sort of defensive shape that we are likely to see from Turkey, with Yılmaz staying high up the pitch to facilitate counter-attacking opportunities through long balls played to him, while the rest of the side drops into a compact block. As we can see, Yokuşlu will attempt to stay tight to any players who will look to receive possession between the lines, while Söyüncü and Demiral can also step up to engage players if necessary. Turkey will attempt to force Italy sideways and backwards, cutting off central passing options wherever possible. 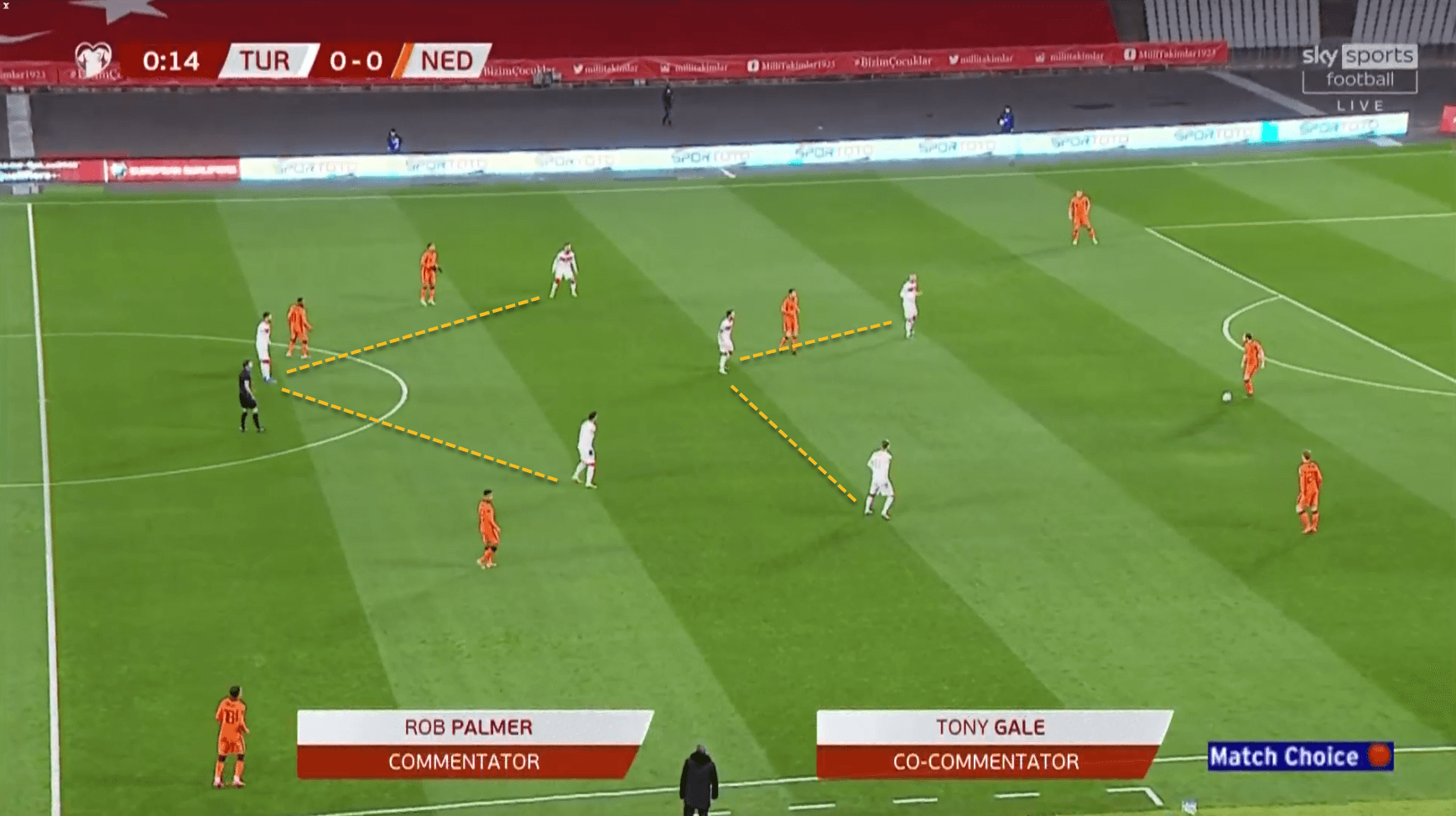 Turkey are hardly a high-pressing side, and they will attempt to sit back and cut off passing lanes even higher up the pitch. This example, again from their recent win over the Netherlands, shows how the Turks stay narrow and central, with the wide players also tucking infield to form a pair of inverted triangles, almost, with the aim to deny central passing options to the defenders. Expect Bonucci and Chiellini to have plenty of the ball in such areas, and while Bonucci, in particular, is very good at being able to find teammates with raking long passes, Turkey’s primary aim will be to deny Jorginho and co. the space and time to receive and dictate possession easily.

So, what then should the Azzurri do to get past this Turkey side? In all honesty, nothing too different to what they have been doing so far. Mancini has created a very strong and confident side who are comfortable in possession, with a number of dynamic midfield and attacking options that help to create space and provide options for the man on the ball, and this will be the core philosophy that Italy will try to implement in Rome on Friday night as well.

If we take a look at Italy’s predicted XI, two individuals stand out (for me personally) in terms of their creativity and ability to drag the opposition out of position – Lorenzo Insigne and Nicolò Barella. Insigne is coming off a strong personal season for Napoli, having scored 19 goals and provided a further seven assists, and the diminutive winger will play in a very different manner to Berardi on the opposite flank. While Berardi will stay wide during Italy’s build-up before making late diagonal runs into the box, Insigne will generally move infield into the left half-space, allowing Spinazzola to push on from left-back. This will make it difficult for Turkey to track him, with Yokuşlu and the centre-backs needing to be in constant communication. 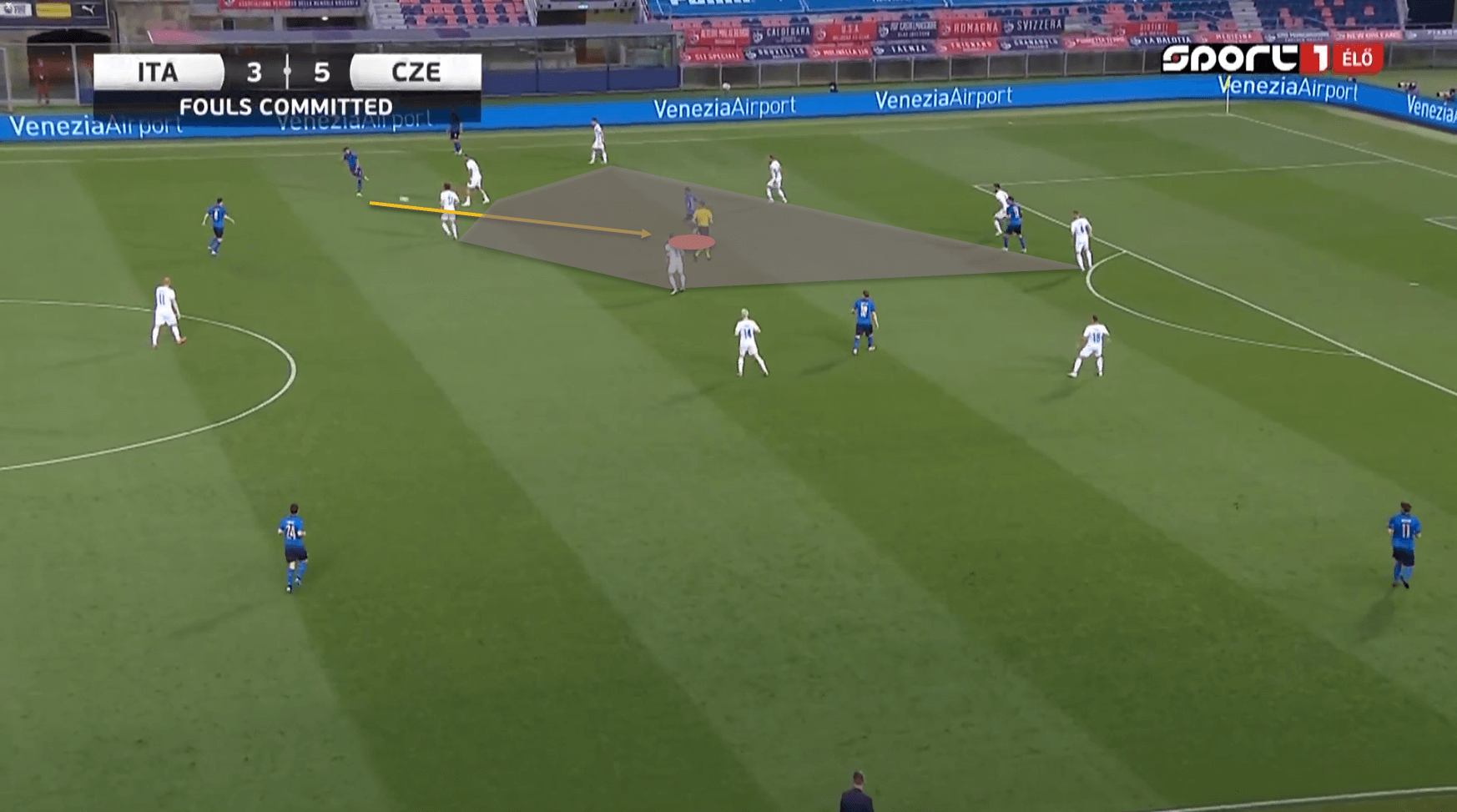 This is the situation in the build-up to Italy’s opening goal against the Czech Republic from their friendly match of a few days ago. Note how Insigne has managed to find space between the Czech Republic lines, and Locatelli is able to pick him out in a dangerous area. 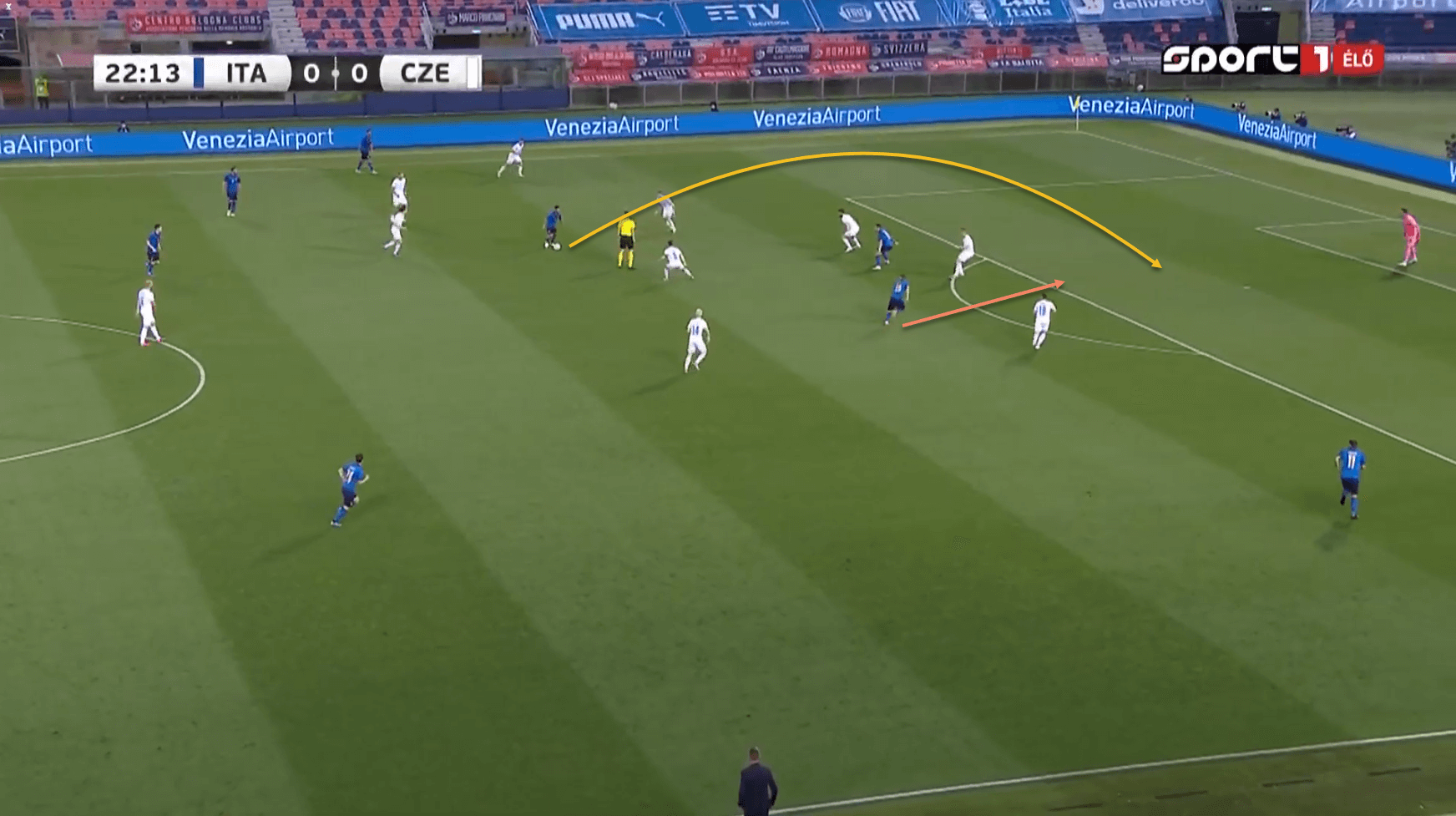 The Neapolitan is then able to turn and try to pick out Barella with a lofted pass, who makes a well-timed run into the box from midfield. The pass is headed away by the Czech defender, but the ball only falls into the path of Immobile, who then scores with a deflected shot at the near post.

This is the second aspect of Italy’s play which will be crucial to their fortunes in this match – midfield runners. In Barella, Pessina and (potentially) Castrovilli, Mancini has players who are accustomed to making late runs into the box for their club sides, and with Jorginho and Locatelli staying deeper, they will have the license to do so for the Azzurri as well.

Italy will attempt to stretch the pitch by keeping players wide in the initial stage of their build-up, as this will then potentially open up the space for these midfield runners. 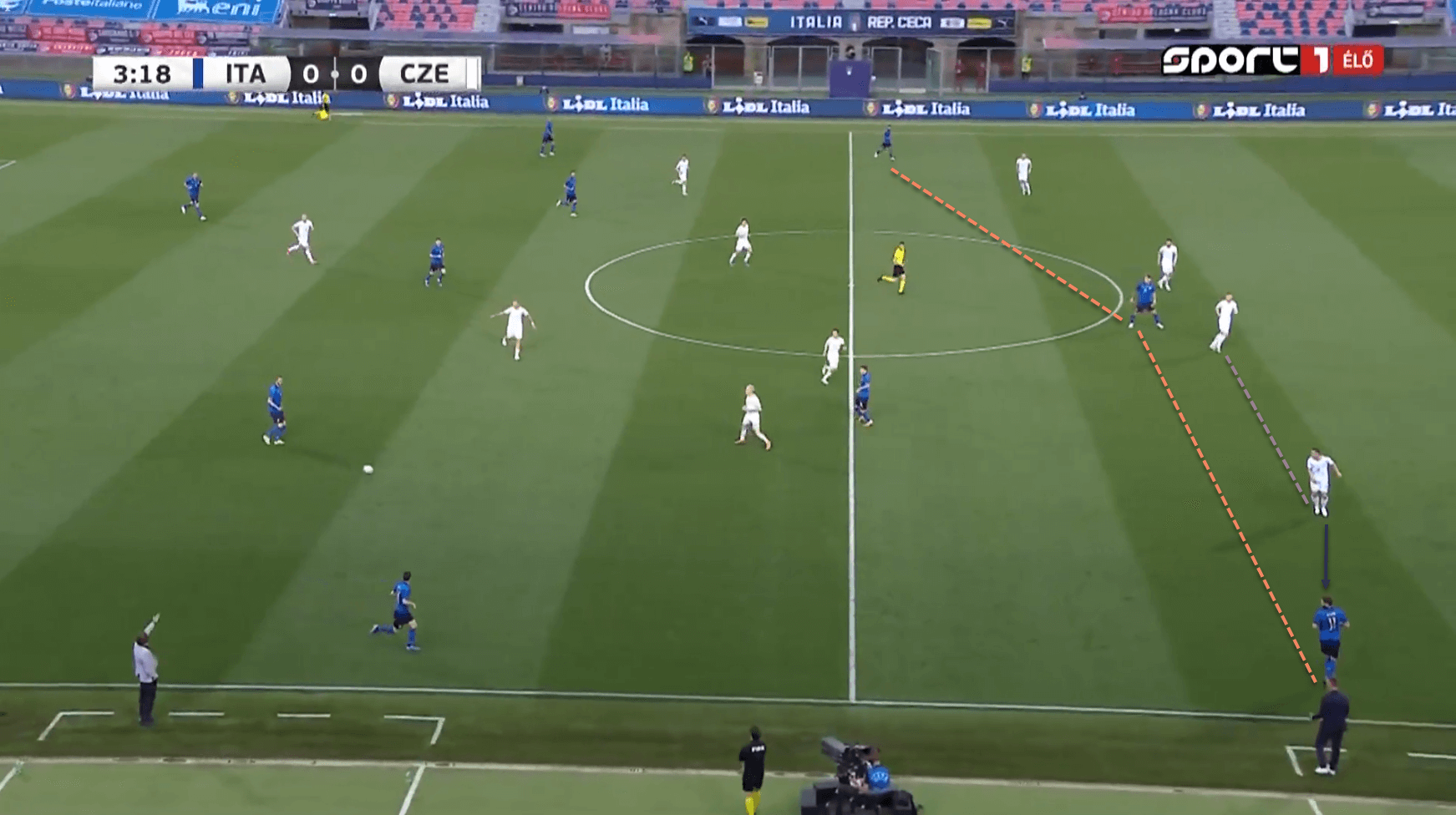 Note how wide both Insigne and Berardi are here – even though Insigne does look to come infield, he will stay wide initially in this manner to stretch the defence. The Czech Republic left-back is already being drawn towards Berardi, and this will open up space for Barella to run into, as we will see next – 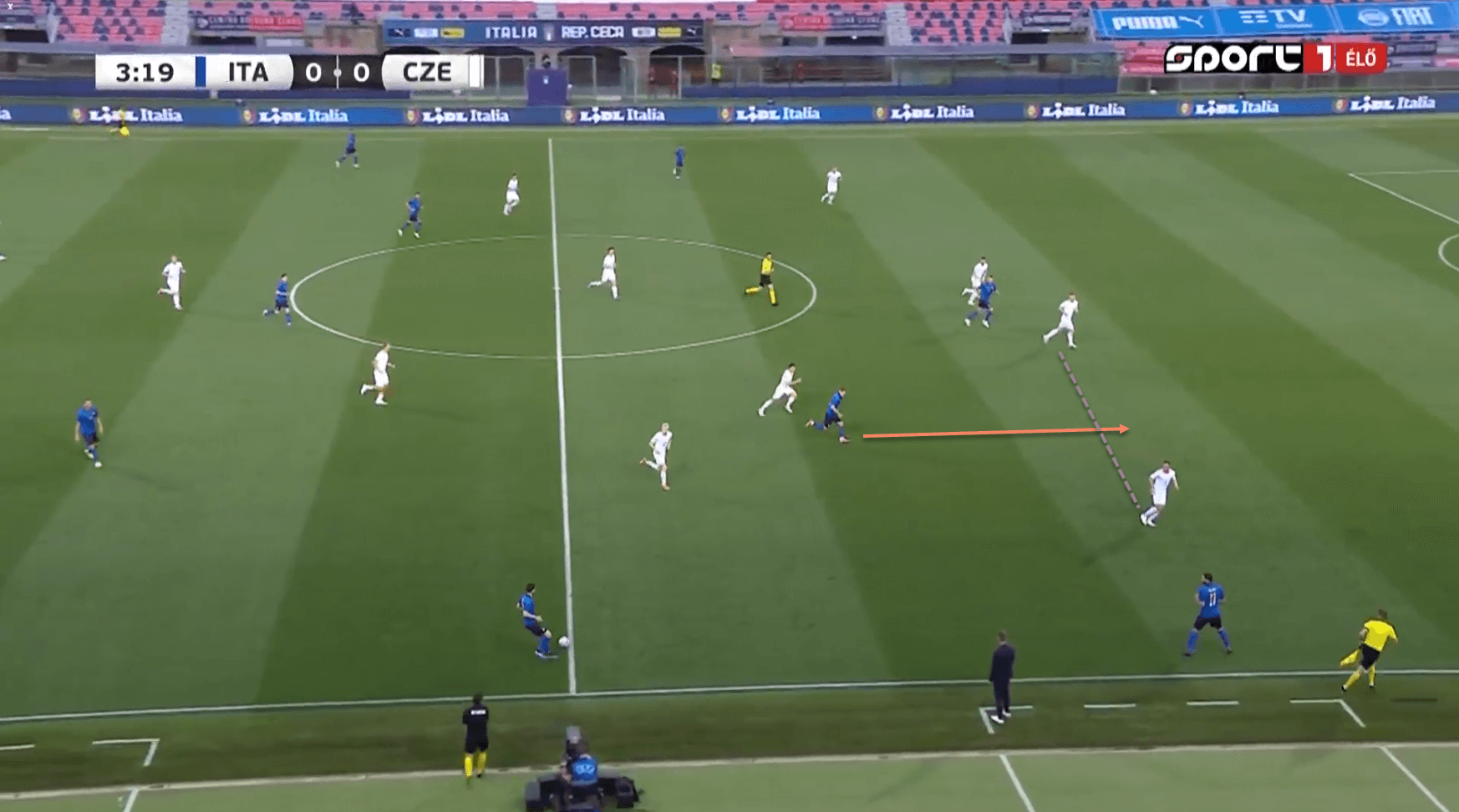 As the right-back Florenzi gets on the ball, Barella makes a forward run into the space that has been created due to Berardi’s wide positioning.

Another related concept here is the use of switches of play – the Italians will often look to build-up down one side before quickly switching the ball to the other flank where players will be in space. 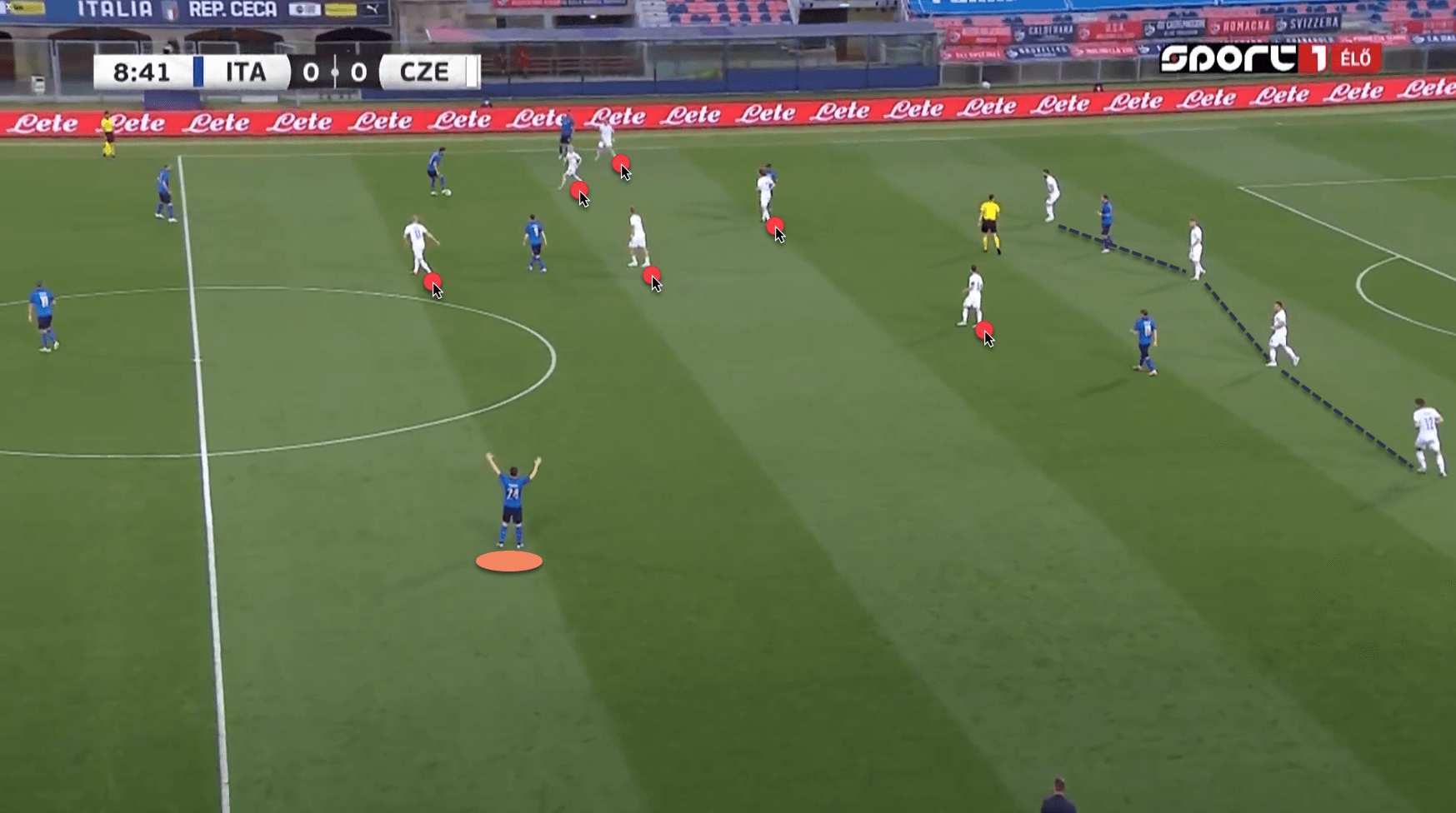 The Czechs have six players on the left half of the pitch here (outside of the defensive line), and this creates a lot of space for Florenzi to receive the ball, as he can be seen gesturing here. 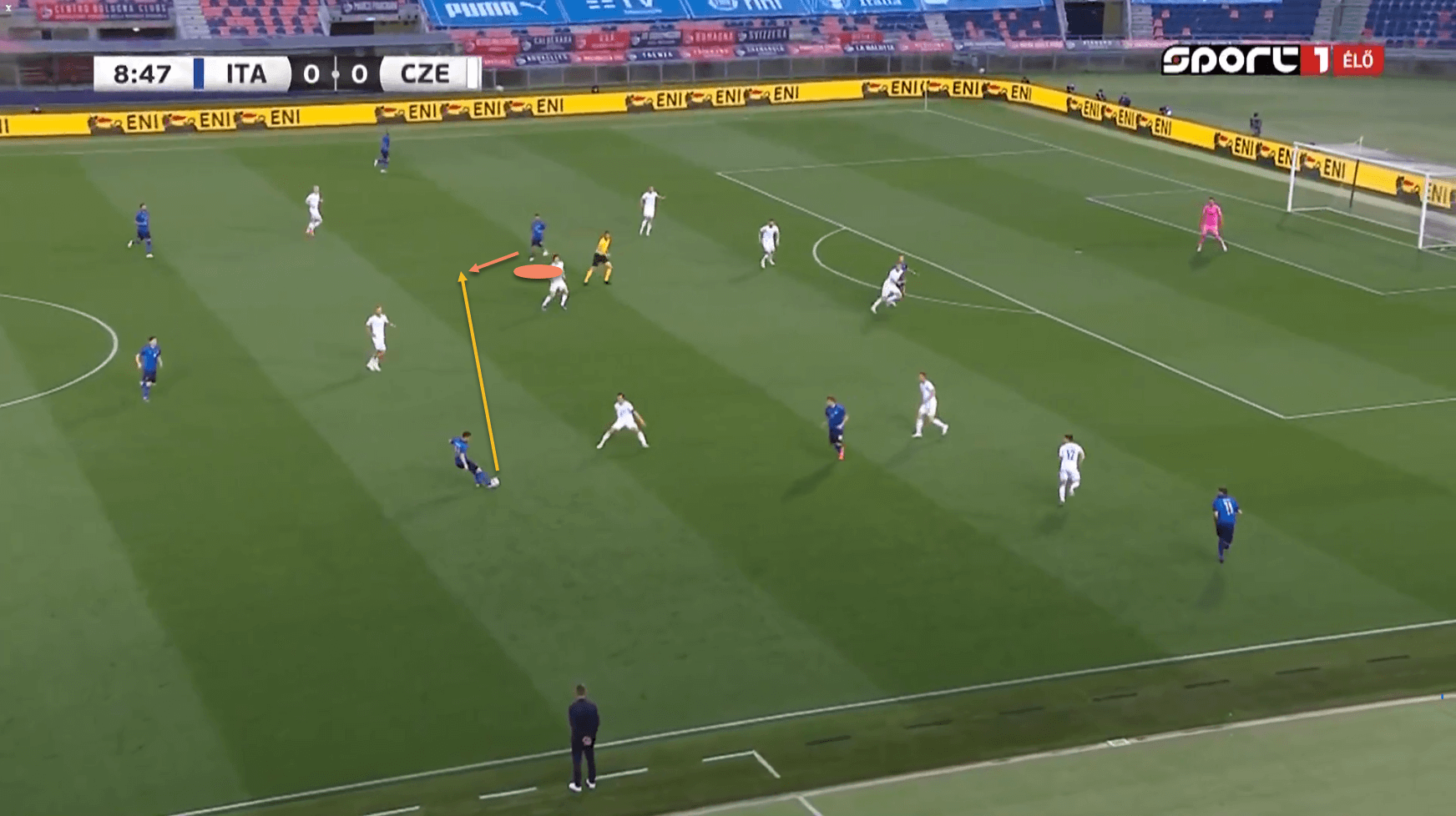 Florenzi then has the space to progress and find Insigne between the lines.

Thus, Italy will need to ensure that they play in a broadly similar manner as they have done recently, sticking to their CARP principles – Costruzione (build up), Ampiezza (width), Rifinitura (approach play between the lines in the final third) and Profondita (space in behind). This should be enough to get them past a dogged Turkey side.

This match should be a fascinating one, as both Turkey and Italy come into the tournament in good form. Both these sides are being billed as dark horses for making a deep run, with Italy perhaps being considered as one of the contenders for the title itself as well. Turkey will not be an easy side to beat – they will be extremely dangerous on the counter-attack, and in Yazıcı, Yılmaz and Çalhanoğlu, they have three attacking players who are in form at the moment, with the likes of Cengiz Ünder providing a big threat off the bench as well. Italy will need to be at the top of their game here, and thus the opener to this long-awaited competition promises to be one that will definitely set the tone for the tournament.