EURO 2020 preview: How will Switzerland survive against Spain’s midfield without Xhaka? – tactical analysis

Switzerland pulled off the biggest upset of EURO 2020 so far when they managed to eliminate France from the tournament in the round of 16, with a thrilling comeback to level thing at 3-3 after going 3-1 down in normal time. This was even more extraordinary given that they were 1-0 up, and it is now quite interesting that they face Spain in the quarter-finals, a team that came through a similar experience in their own round of 16 match against Croatia. The difference here was that Spain, the so-called ‘bigger’ team, prevailed here, winning 5-3 in extra-time after the match had ended 3-3 in normal time. Both these teams have therefore played through 120+ minutes of emotionally and physically draining football this week, and it remains to be seen as to what impact this has on their performances. Nevertheless, Switzerland have shown that they can hold their own against the world’s best, and so we can look forward to an exciting match yet again. This tactical preview of the game will look at the expected tactics for both sides, as well as areas of strength and weakness that could play a big role in the match. 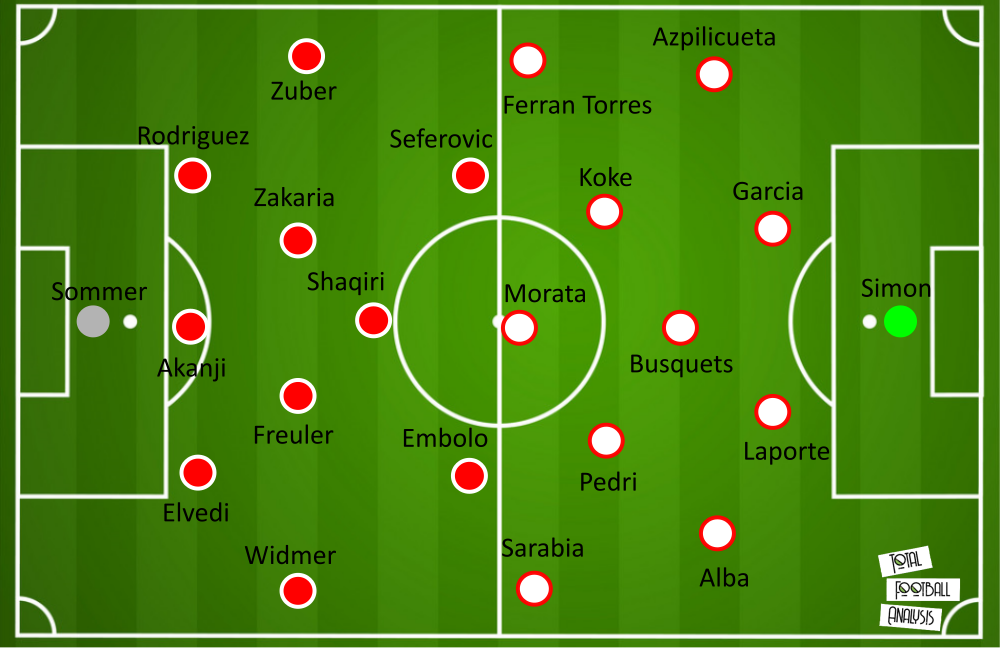 Vladimir Petkovic will be without Granit Xhaka for this match due to suspension, so we expect Denis Zakaria to come into the lineup instead. The rest of the side should be the same as the one that came through the round of 16 clash with France.

Luis Enrique finally seems to have hit on his first-choice XI, and we expect no changes from the side that was sent out in the previous round.

Spain need to be wary of Switzerland’s wide threat

Switzerland found a lot of joy down the flanks against France, especially down their left, where Ricardo Rodríguez would move out from his centre-back role to become a left-back, and Steven Zuber pushed on ahead of him. They were able to pull the French backline out of shape repeatedly through their rotations on that side, and while Spain will be playing with a back four and wingers which should theoretically prevent this, it will require a lot of tracking back from Pablo Sarabia and Ferran Torres to ensure that their full-backs are not left isolated. 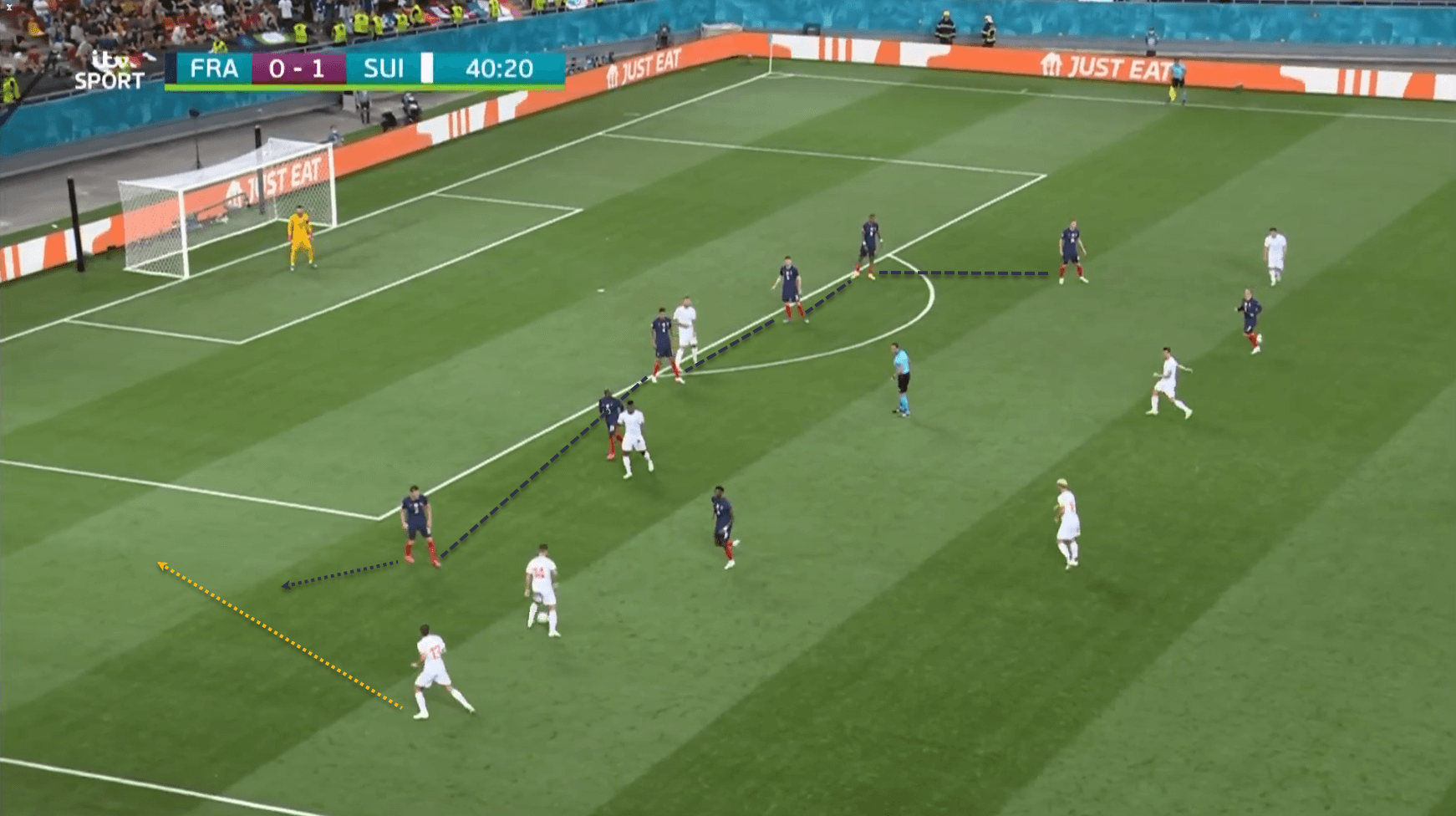 One such example from the France game, where Zuber (on the ball) has Rodríguez overlapping outside him, drawing Benjamin Pavard out and creating space in the French defence. 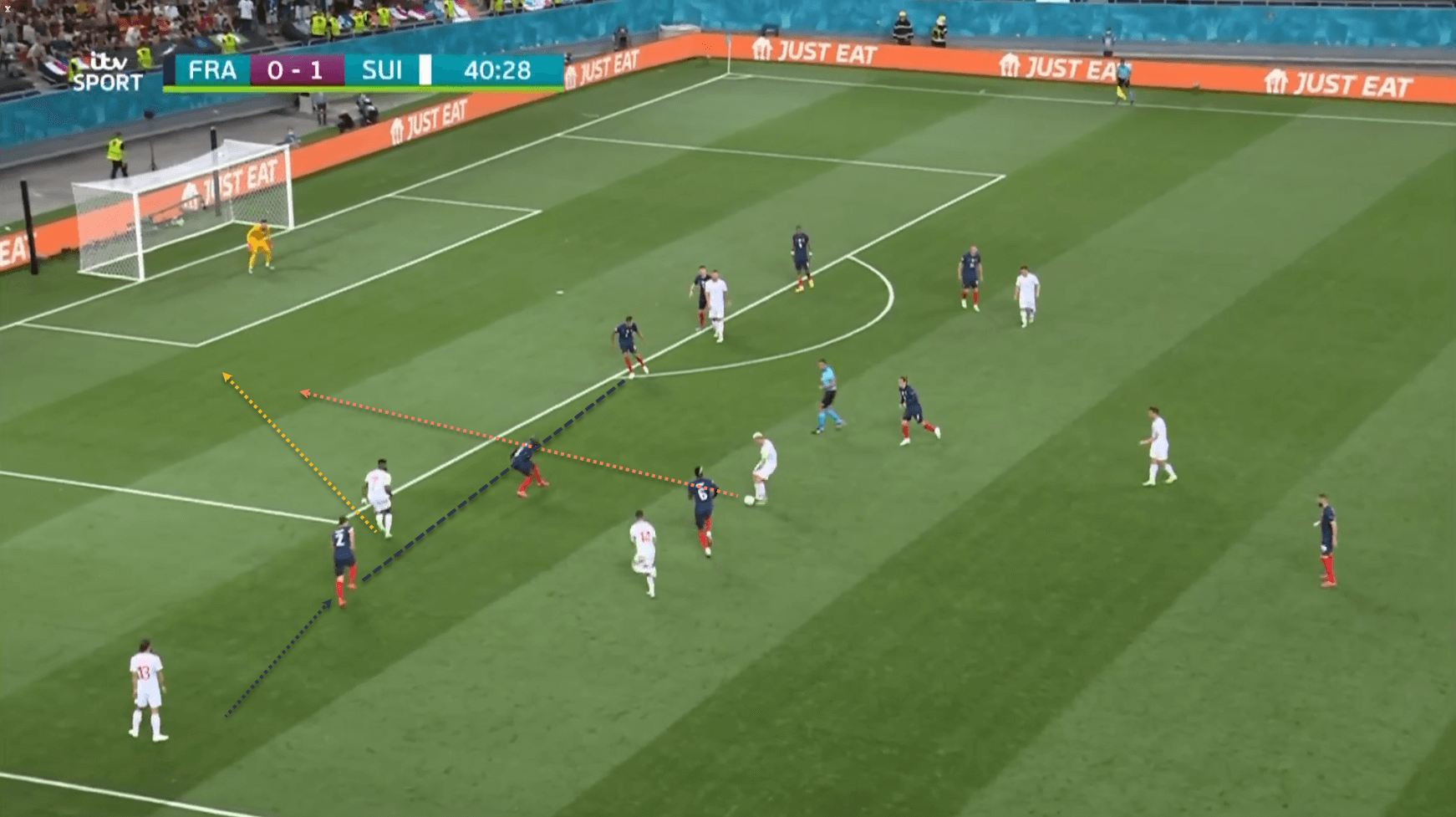 The ball is worked out to the Swiss left-back and back again, and this creates a huge gap for Embolo to run into, with Xhaka able to find him in the box with a relatively simple pass. Pavard is left scrambling here since he was initially drawn out to cover Rodríguez’s run and is thus in a wider position when the ball is played back centrally. Switzerland will try to create similar situations down their left flank again versus Spain, and it will be down to whoever plays on the right wing (most likely to be Ferran Torres) to track back and ensure that César Azpilicueta is not caught out in a similar manner.

Note how it is Embolo making the run into space – the Borussia Mönchengladbach forward will also be a big threat for Spain to monitor, capable of dropping off the backline to combine with his teammates before sprinting in behind.

Embolo’s threat in front and behind

The 24-year-old was a constant menace in that game against France, while he got on the scoresheet in the game against Wales earlier in the tournament through this approach as well. 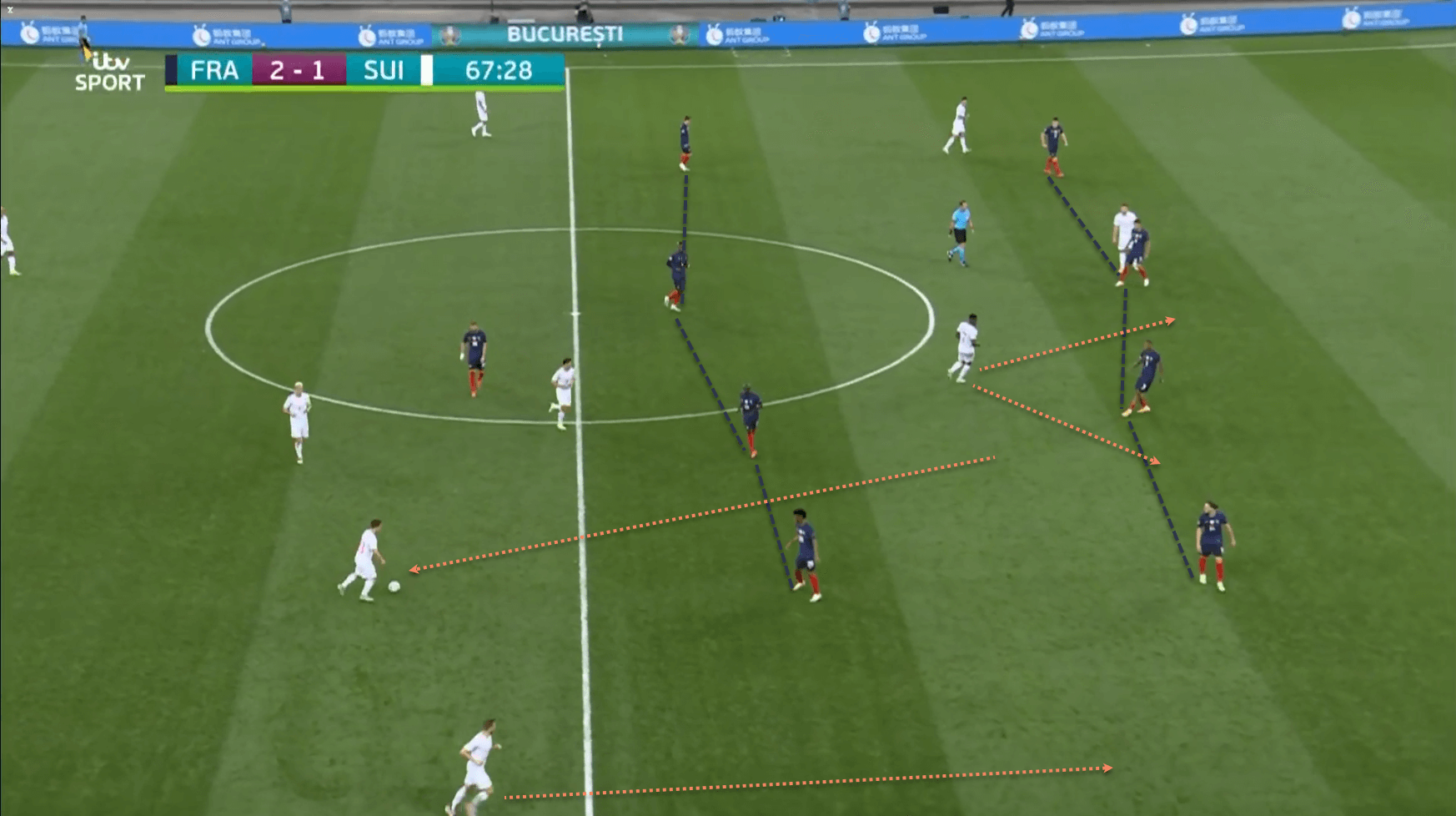 Spain can expect this sort of rotation to be used by Switzerland – Xherdan Shaqiri will drop deep and central to get on the ball, which will allow Stefan Widmer to push on from right wing-back, with Embolo also staying in front of the defence to create the space for himself to accelerate into. Haris Seferović will offer a more ‘conventional’ threat by staying deeper, on the shoulder of the defensive line, and therefore also helping to pin them and helping to open up the space for Embolo. 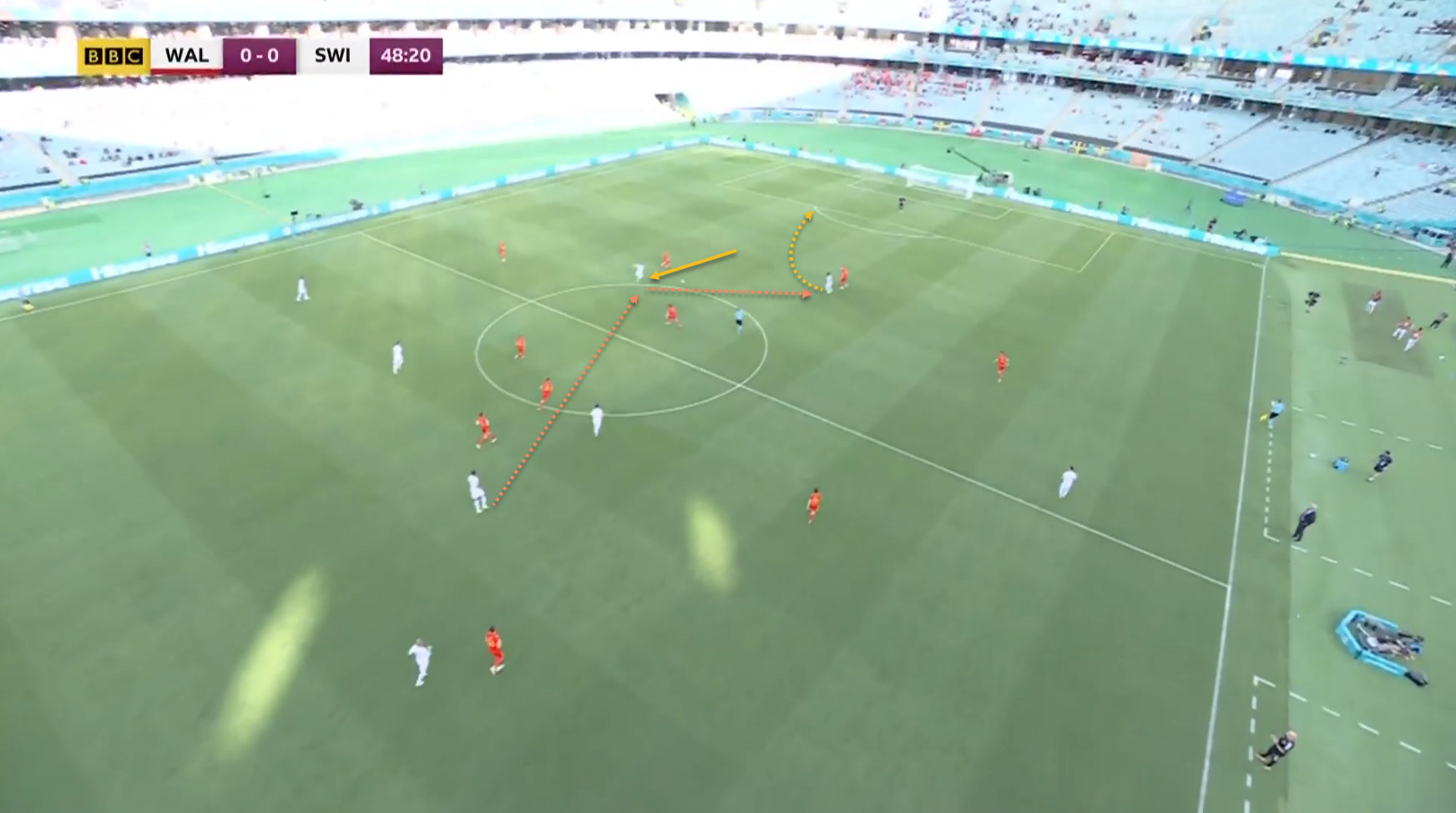 This partnership worked perfectly in the build-up to Switzerland’s opening goal against Wales. Manuel Akanji was allowed to step out of defence, and he played a pass through the lines to Seferović, who dropped off to receive, dragging Chris Mepham with him. Seferović played a first-time layoff to Embolo, who was able to spin into the vacated space behind the Wales defensive line, and ran through to get a shot on goal that Danny Ward saved, with Embolo then scoring from the resulting corner.

Spain are also going to play with a four-man defence, meaning that Eric Garcia and Aymeric Laporte will each have a direct opponent. Thus, movement of this sort from the Swiss forwards can easily open up space for either of them, and it is something that the Spanish defenders will have to be wary of.

If Seferović stays deeper and on the shoulder of the Spanish backline, it will then allow Embolo to drop deep to pick up possession, turn, and drive into space. 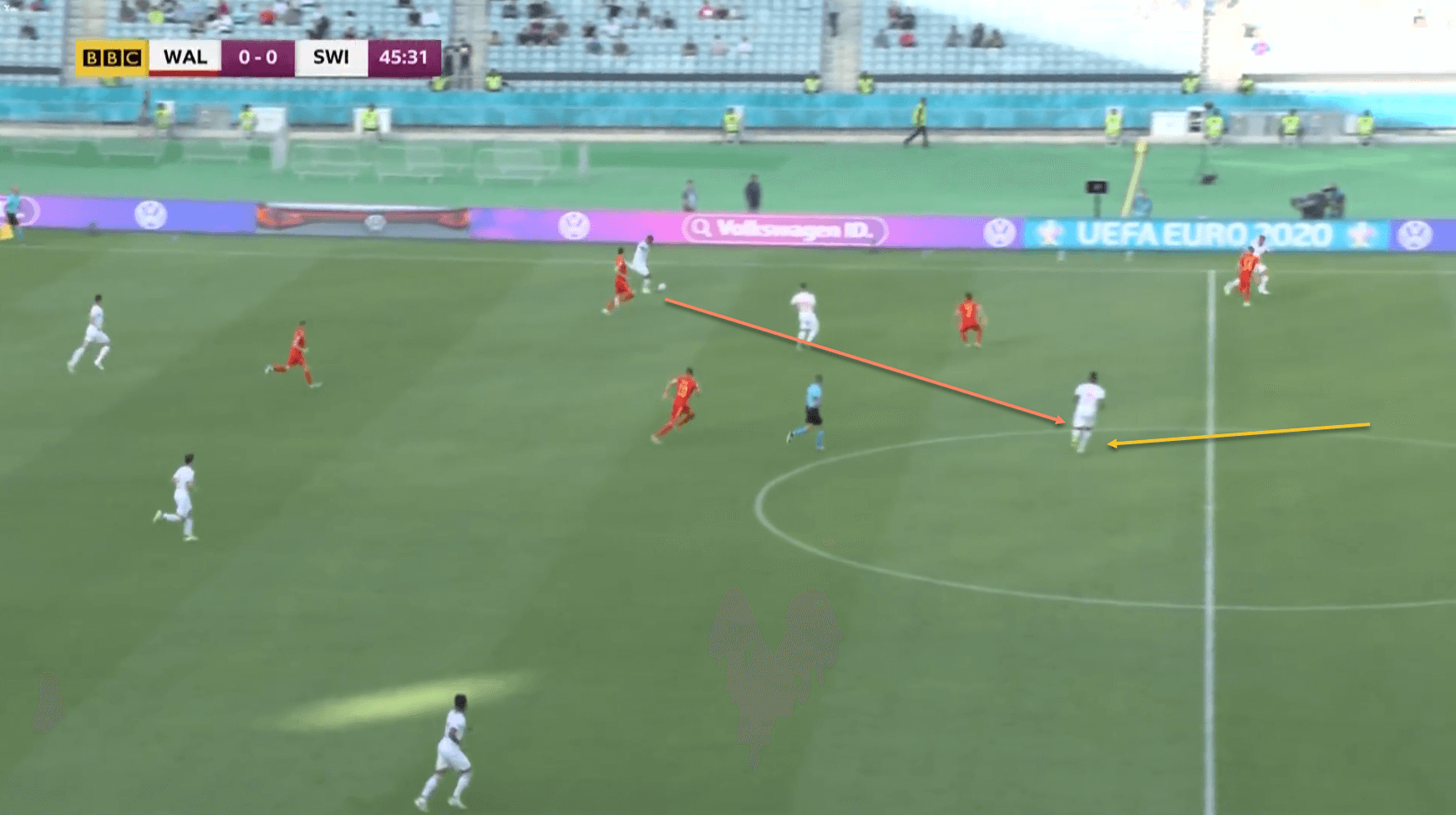 The 24-year-old drops to receive here… 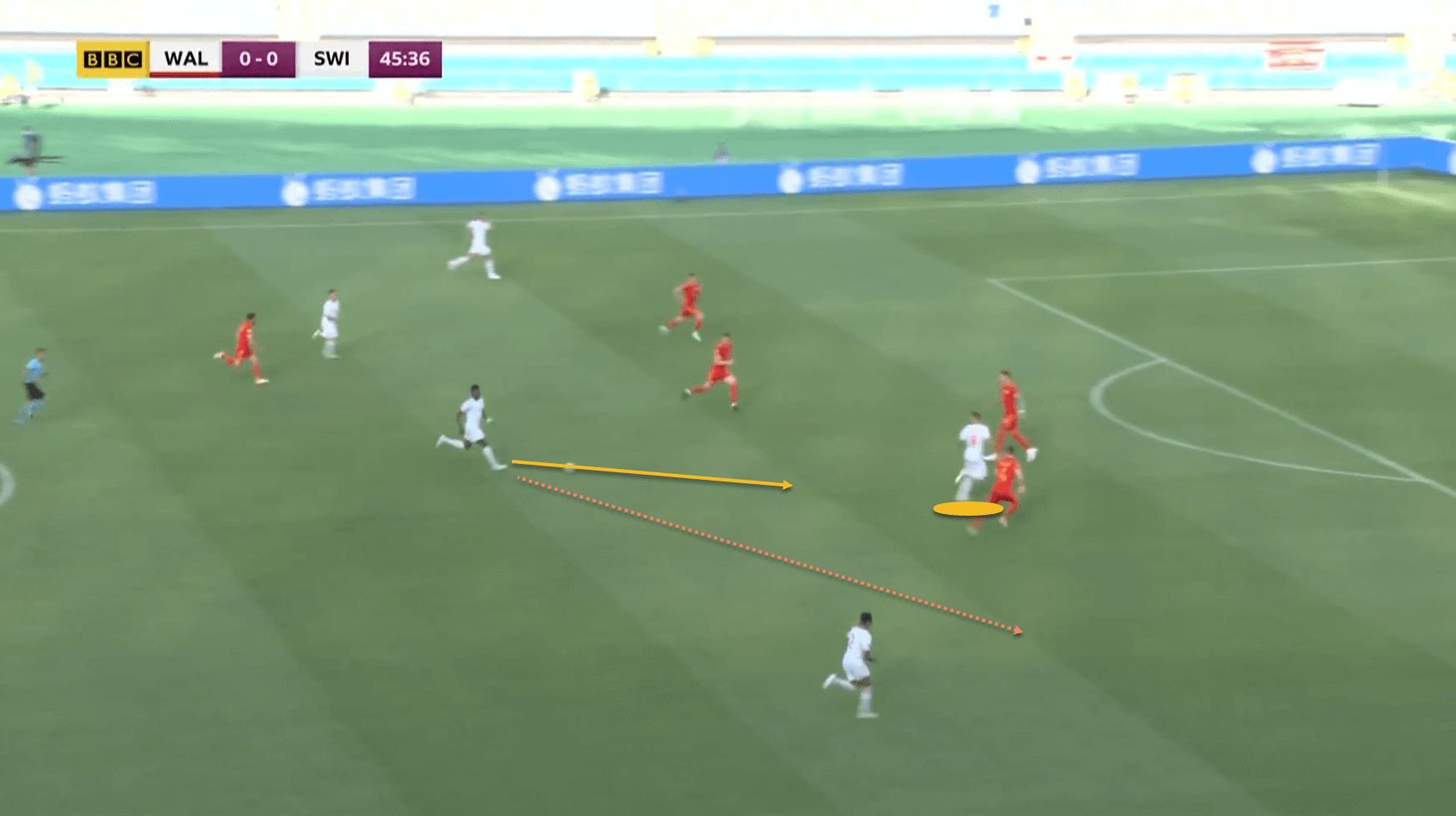 …and with Seferović forcing the Wales defenders to stay deeper, he can drive forward, and has the option of playing in Kevin Mbabu on the right as well, since Ben Davies has also been drawn narrow due to Seferović’s positioning.

Sergio Busquets’ position at the base of the Spanish midfield will be extremely vital – the Spain captain will need to use all his experience and nous to block this route and mark Embolo when he does drop off to ensure that his side are not caught out in this manner.

Another area where Spain will need to be careful is with regard to Switzerland’s threat in the air. Seferović is an excellent header of the ball, as he showed twice against France, and Spain looked extremely shaky at the back when forced to defend their box against Croatia. Spain are excellent at defending higher up the pitch, but they can be put under pressure with balls into the box, and this is a strategy that Switzerland will definitely use, given how Seferović thrives in such situations. 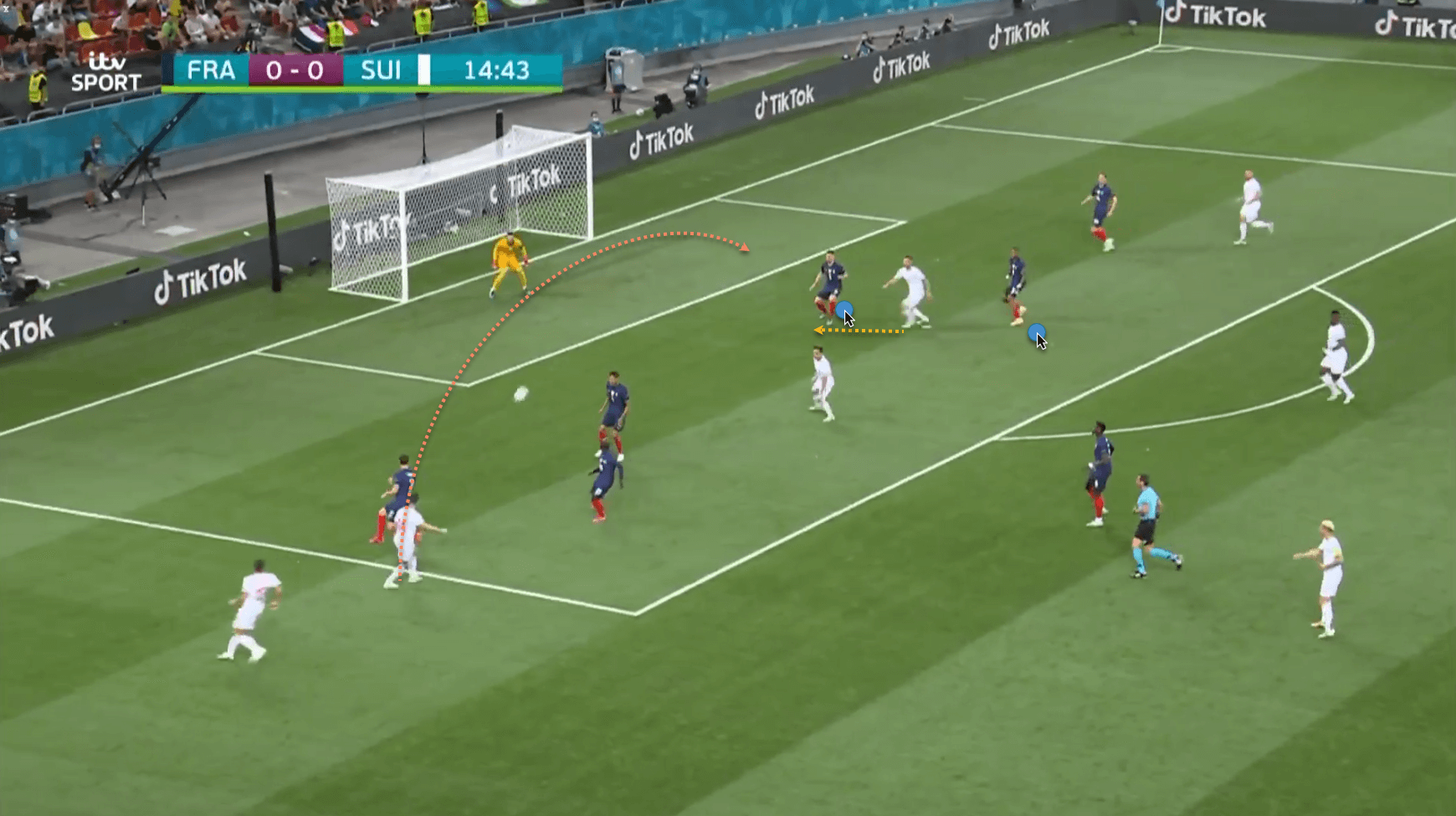 The Benfica striker gets a run on Clement Lenglet here, with Presnel Kimpembe in no position to defend either the cross or the man, and is able to guide a header into the bottom corner. 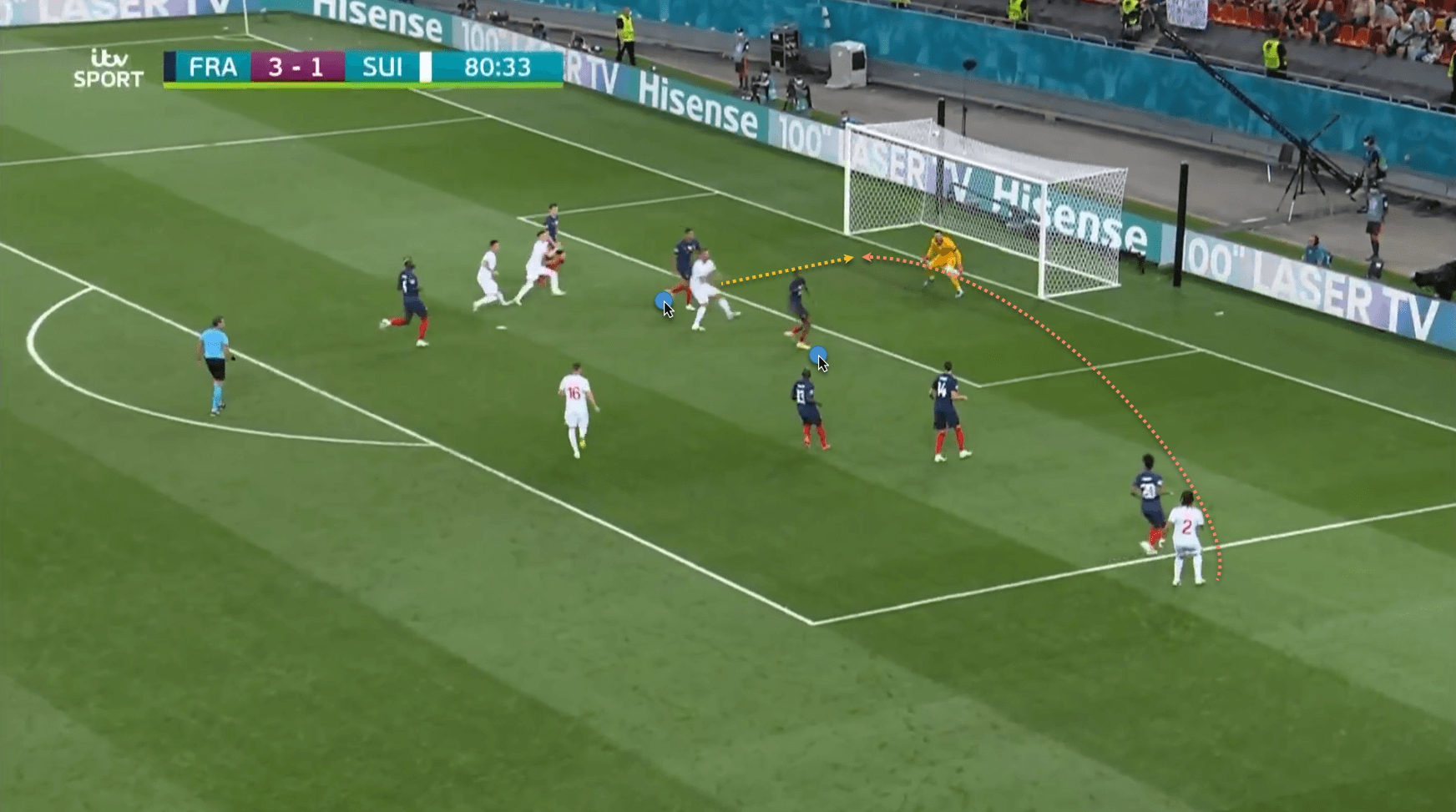 He manages to get between the French centre-backs here to convert Mbabu’s superb whipped cross.

Now look at how Spain conceded the equalizer against Croatia. 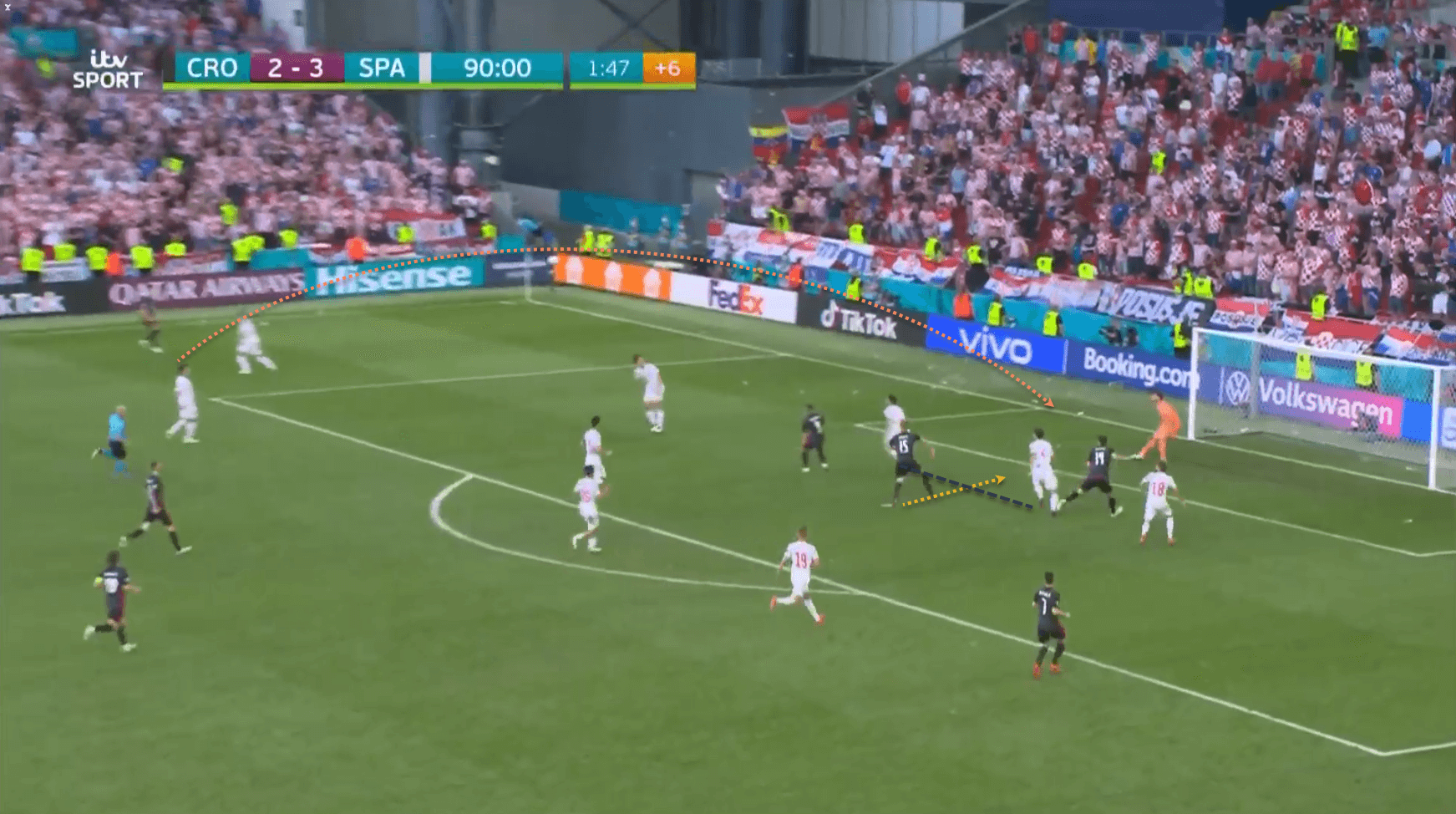 Mario Pasalic gets in between Laporte and Pau Torres (who had replaced Garcia) here to head in Mislav Oršić’s superb whipped cross.

Of course, both these situations arise from the attacking team throwing men forward in search of a goal, leading to more men in the box than usual. However, this is likely to be a tactic that Switzerland will try to exploit on occasion due to Seferović’s aerial prowess and Spain’s weakness at defending crosses into the box.

Spain will dominate possession, and as they have shown throughout the tournament, they are quite good at creating chances, even if the finishing has been a little disappointing on occasion. Even that problem seems to be under control now, with La Roja having scored five goals twice in their last two matches. The Spain wingers, Sarabia and Torres, will stay wide to stretch the Swiss defence and pin their wing-backs, which in turn will open up space in the channels for the likes of Pedri and Koke to advance and link play. 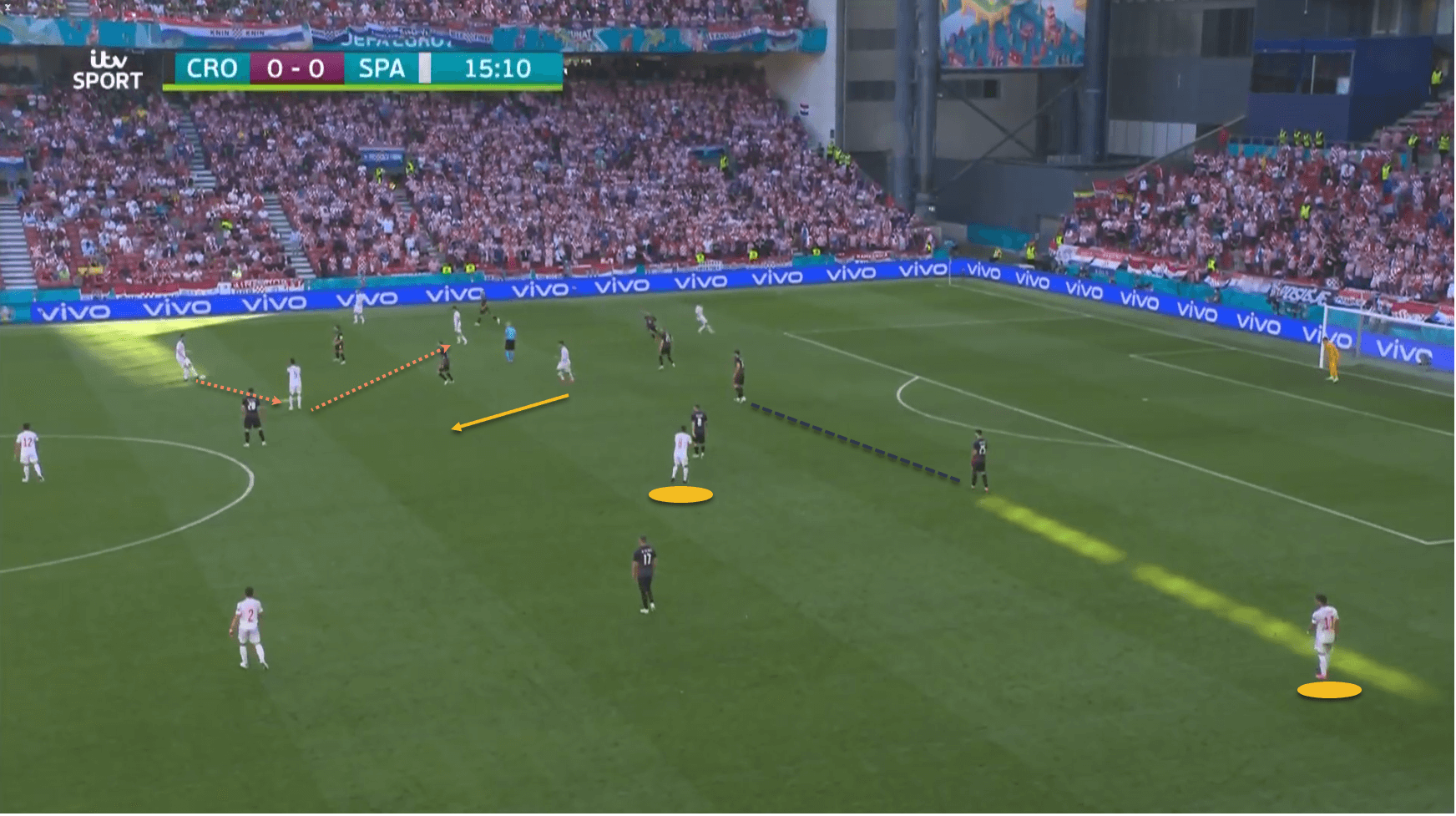 This is a good example of Spain’s use of width to stretch play. Note how Torres is extremely wide on the right – while he will not play a direct part in this move, his presence forces Joško Gvardiol to stay a little wider at left-back, which opens up the channel between him and Duje Ćaleta-Car. Álvaro Morata also drops off from the Croatian defensive line to try and drag a defender out. Laporte plays the ball to Busquets, who moves it on to Pedri… 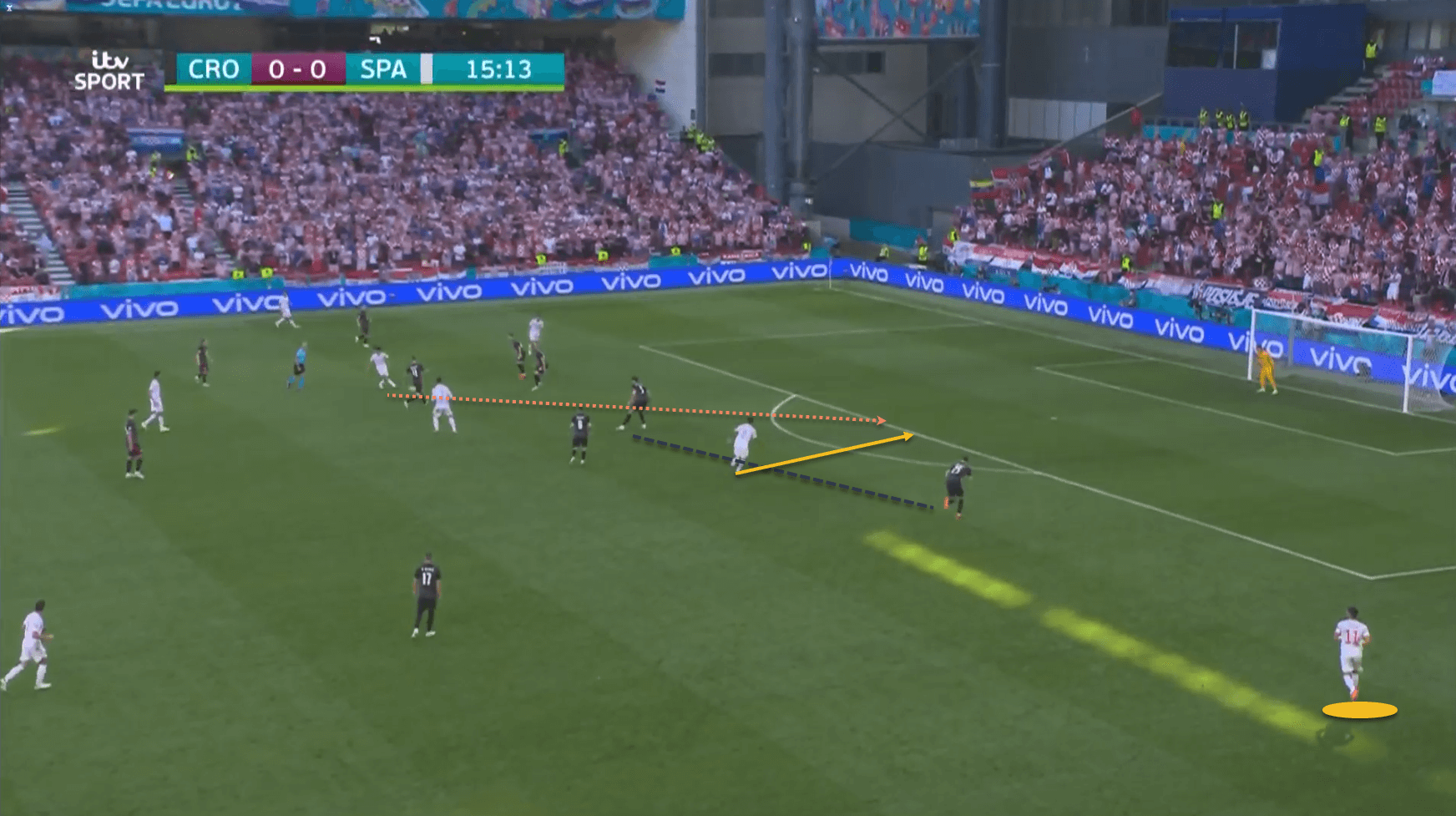 …and the Barcelona man can then find Koke, making a run from a deeper position in behind the Croatian defensive line.

These sort of combinations will be seen frequently from Spain – the wide attackers staying wide to pin the Swiss wing-backs and therefore creating space centrally for this sort of run from Koke or even Pedri on the opposite side. Koke, in particular, has played well at EURO 2020 so far, dropping deep and running in behind on the right, with Torres also capable of staying wide or moving infield when needed, while Azpilicueta actually popped up in the Croatian box to score Spain’s second goal in this match. Spain’s rotations down the right will play a big role in their attacking strategy, and Switzerland will need to make sure that they do not get too stretched in response.

This is set to be another excellent EURO 2020 knockout match, and Switzerland showed in the game against France that they can definitely mix it with the big boys. It will also be an intriguing tactical match-up, since both sides have particular setups and processes that are well-set to exploit their opposition’s weaknesses, and while Spain have shown their ability to blow away teams with late goals in their last two matches, especially with the use of fresh legs and energy off the bench, the Swiss will be flying high after eliminating France as well, and there is no guarantee that Spain will go through.