Euro 2020: How Spain overcame a late scare to advance to the quarter-finals

On Monday, Croatia and Spain butted heads in the Euro 2020 Round of 16, in what proved to be one of the most exciting games in the competition thus far. It was a game that started off with Spain going behind thanks to a bizarre own goal, as Pedri played a firm back pass to Unai Simon, which the keeper missed entirely. But Spain then took a firm grip on the match, and with just over five minutes left of regular time, they were winning 3-1 courtesy of goals from PSG‘s Pablo Sarabia, Chelsea‘s Cesar Azpilicueta and Manchester City‘s Ferran Torres. However, the game would be 3-3 by the final whistle thanks to a frantic last few minutes with goals from Mislav Orsic and Mario Pasalic. With the game in extra time, Spain were able to rally once again and see off the Croatians, this time with finishes from Alvara Morata and Mikel Oyarzabal, meaning Spain’s five goals came from five different goalscorers. This tactical analysis will focus less on the story of the game, and instead give an insight into some of the tactics used by both sides in this Euro 2020 knockout game.

The first thing to examine in this analysis is the chosen line-ups and the set-ups these players were placed in by either coach. 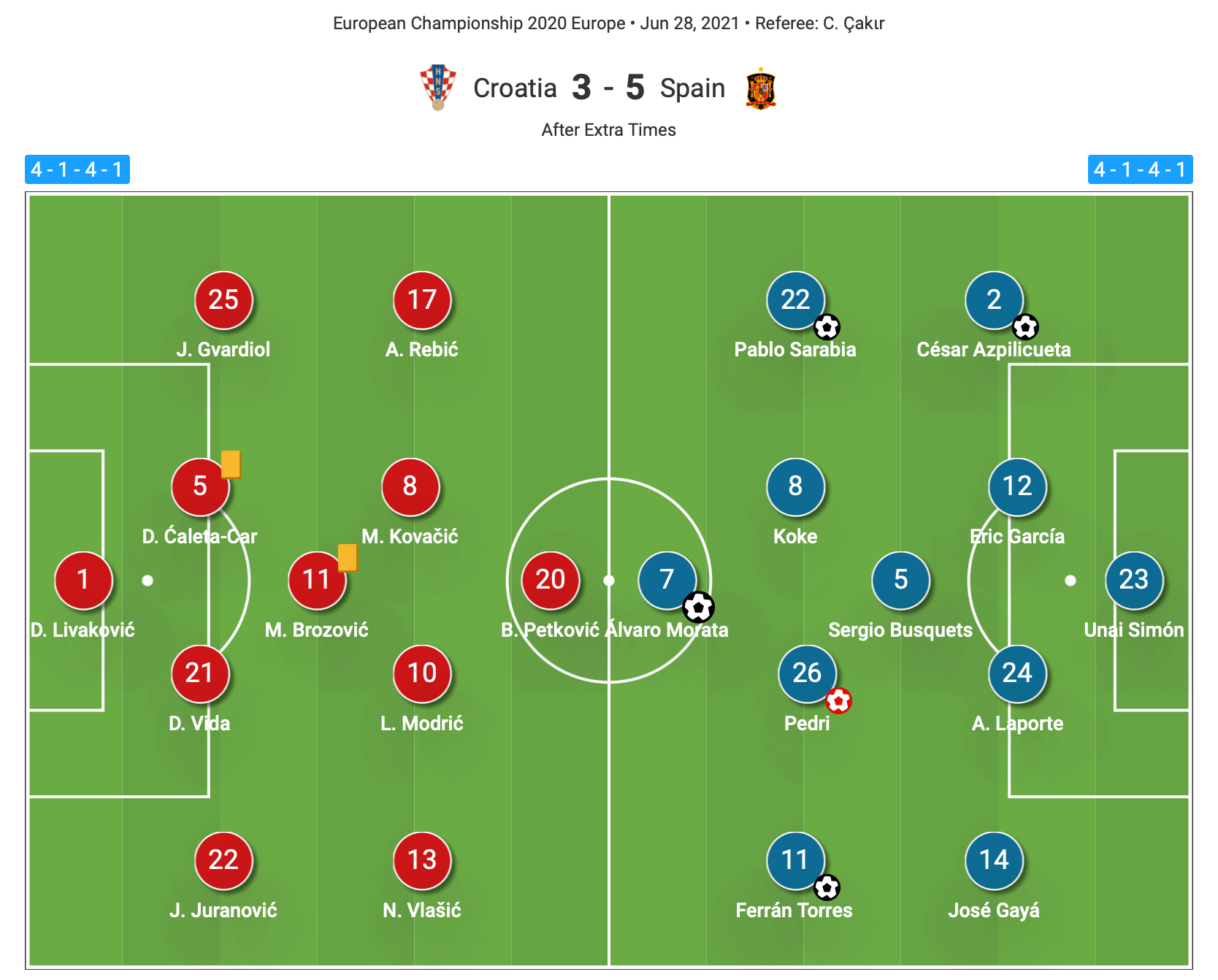 Croatia opted to make no changes to the personnel in their line-up. However, there were slight alterations to their shape. Whilst previously they had played with slightly more defined 4-3-3, with Marcelo Brozovic still as a single pivot, they dropped Ante Rebic and Nikola Vlasic into slightly more reserved roles, where they would switch between that inside forward role, and a more conventional winger, albeit still staying narrow. Croatia wanted to ensure their midfield was packed with little room for Spain to play through, and they were happy to push their opponents out wide, giving plenty of space on the flanks.

Spain made a couple of alterations themselves. Jose Gaya came in at left-back for Jordi Alba, whilst Gerard Moreno was omitted in place of Ferran Torres. It was likely Spain Head Coach Luis Enrique anticipated having more space on the wings available and with Torres and Sarabia on either wing he had players who would be all too happy to use this space.

Croatia looked to frustrate their opponent, instead sitting in and hurting them on the break. Over the course of the game they averaged 34% possession. One constant throughout with their defensive shape was in ensuring there was little to no space between the lines.

As Spain advanced the ball the midfield would shift across dutifully, keeping some horizontal compactness, but most importantly they looked to prevent Spain’s attackers from receiving in the spaces between the midfield and defence. We can see this compactness in the analysis of their shape shown below. 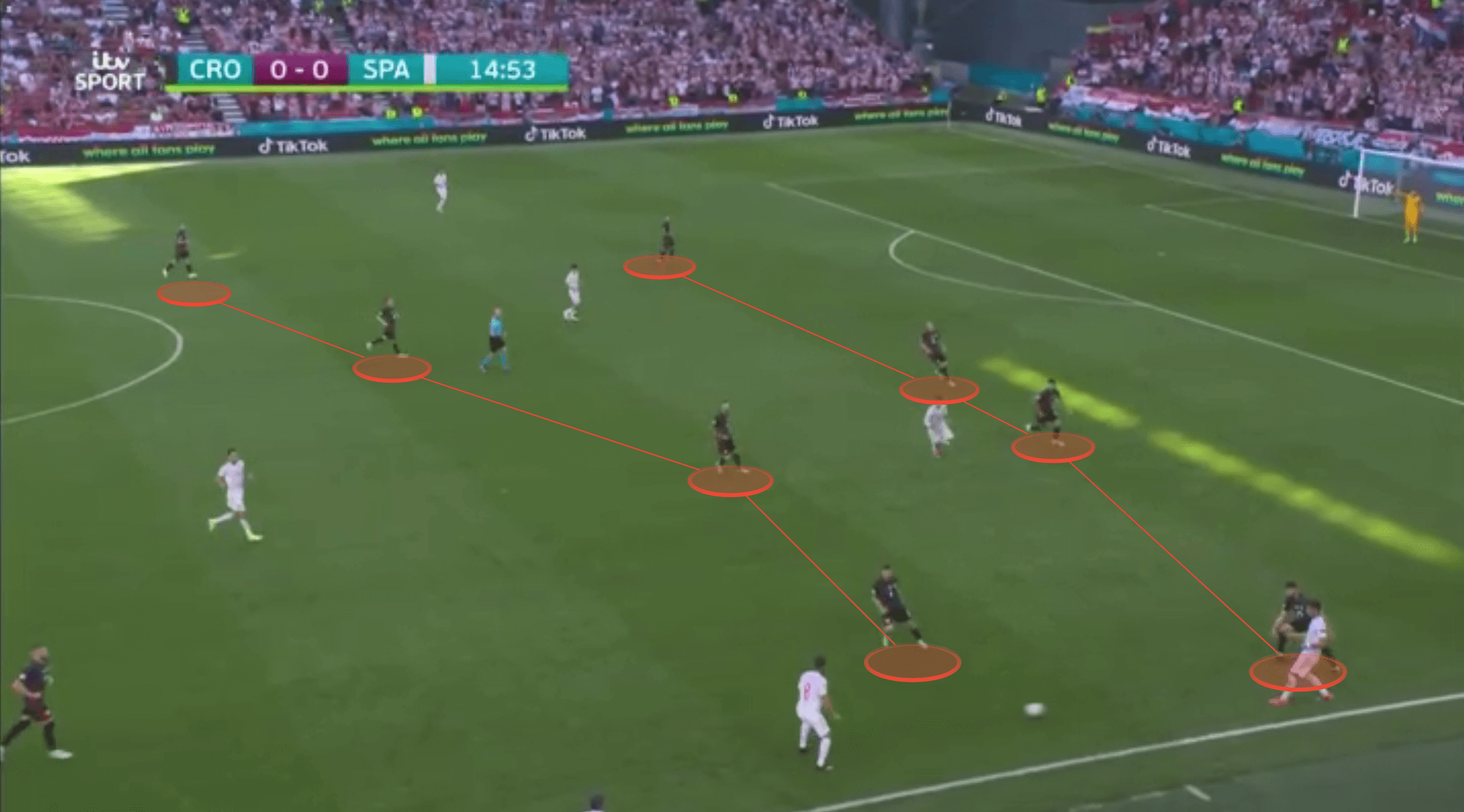 Any attackers on the other side of the ball would also track back and keep the space limited between themselves and the midfield too. In doing so they prevented large spaces opening up in the Croatia midfield, but their proximity to the action also gave Croatia’s defenders an easy outlet pass for the attacking transition when they turned over possession.

Croatia’s compactness in the midfield allowed them to adjust easily to any of Spain’s rotations and their defensive shape could be a little more fluid. In the image below, where we can also see their attackers dropping back and closing the space between them and their midfield, we can see how Croatia’s right-back and right-midfielder swap positions as Spain’s left-back and left-winger do likewise. Whilst this could be risky, with such little space between the lines it made for a seamless transition, and ensured Spain’s rotations didn’t give their attackers too much time on the ball, where they could then turn and pick passes through the Croatian defence. 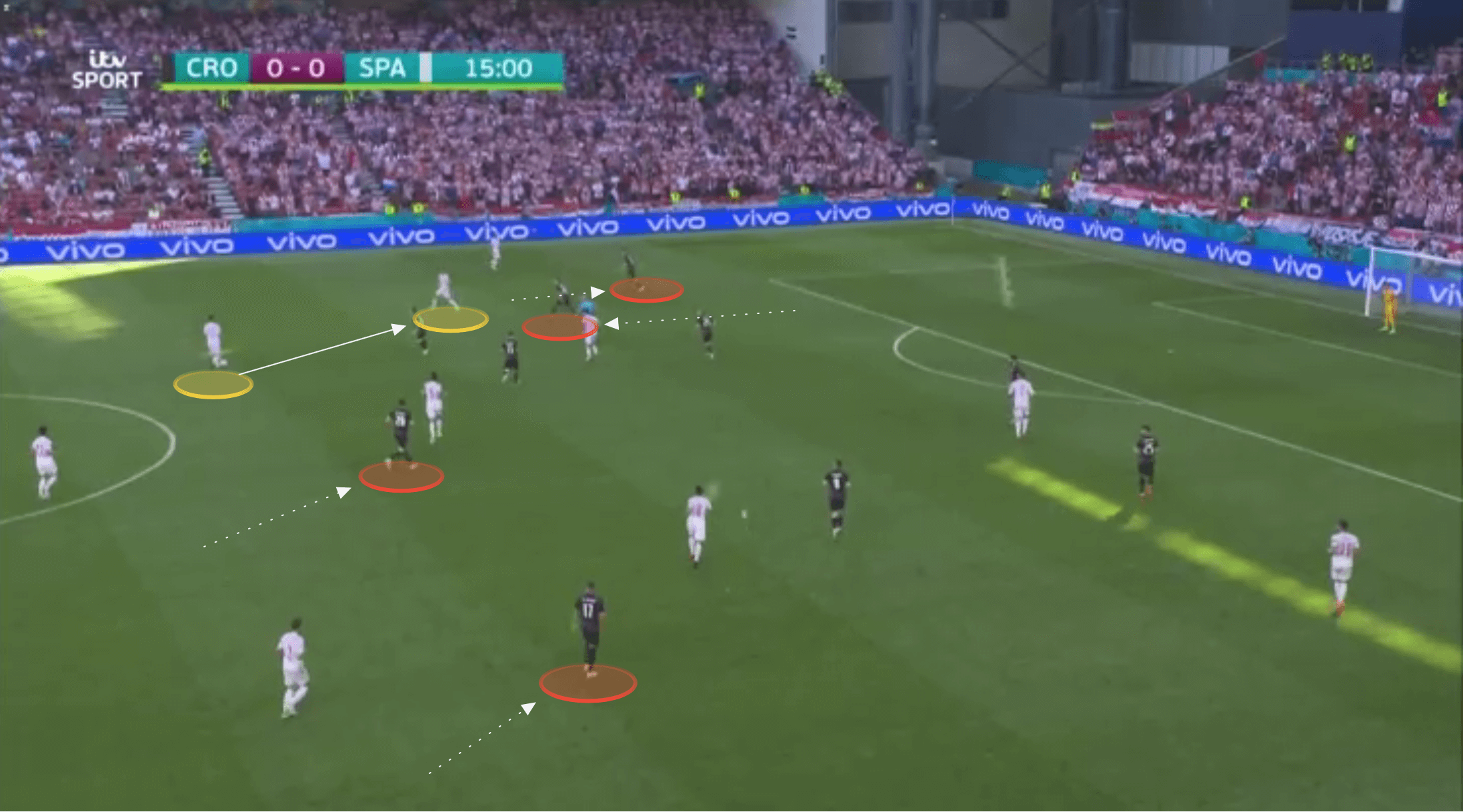 With Croatia sitting deep in a compact block, Spain looked to draw them out, and if they could quickly bypass the Croatian first and second line of press, play quickly into attacking areas.

They looked to structure this through their build-up play. Spain would work the ball forwards and backwards, looking to draw Croatia forward a little more with these backwards passes. Working the ball back to Unai Simon, both centre-backs would then stretch wide, and the full-backs stayed relatively deep and wide themselves.

Sergio Busquets would then drop deep aggressively to offer for possession, drawing his man-marker with him, with Unai Simon missing out this pass together and playing a diagonal to the furthest full-back. We can see this pattern in the image below. 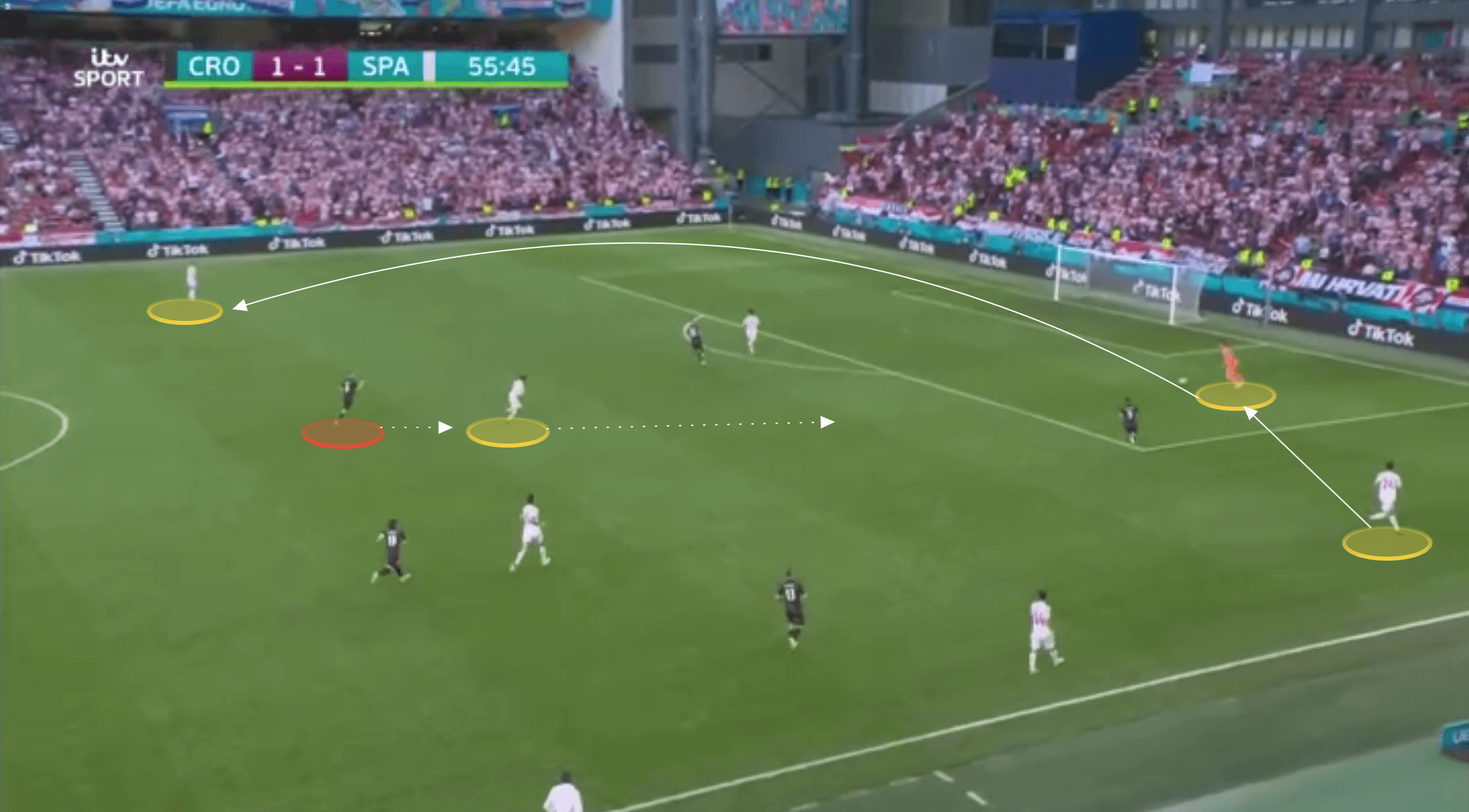 The full-back, in this case Azpilicueta, could then drive forward in possession and progress the ball with a dribble, driving into the space left open thanks to Croatia’s midfield being drawn forward themselves. 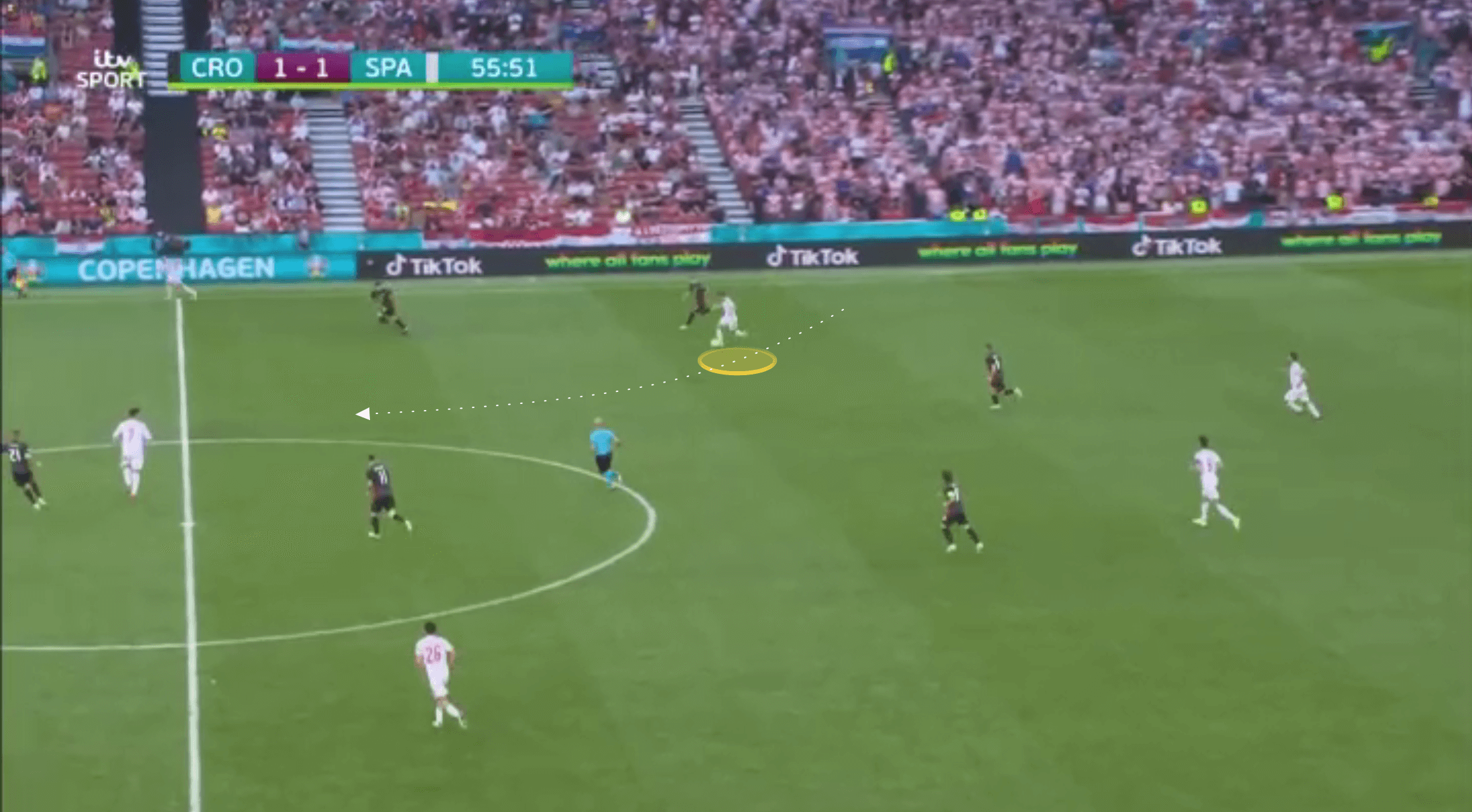 Approaching the Croatian half, the full-back could then find a forward pass option, allowing Spain’s quick attack to continue at such a speed. Luis Enrique instructed Torres and Sarabia to stay wide, whilst Jose Gaya could push high himself. Either way, Spain would have wide options, as shown below, on these quick breaks, with players arriving towards the back post. These runs from these arriving players would look to create space between either the two Croatian centre-backs, or the centre-back and their nearest full-back, and to do this they would use simple misdirection, initially leading one way, before darting the other. We will look at this pattern later on in this analysis. 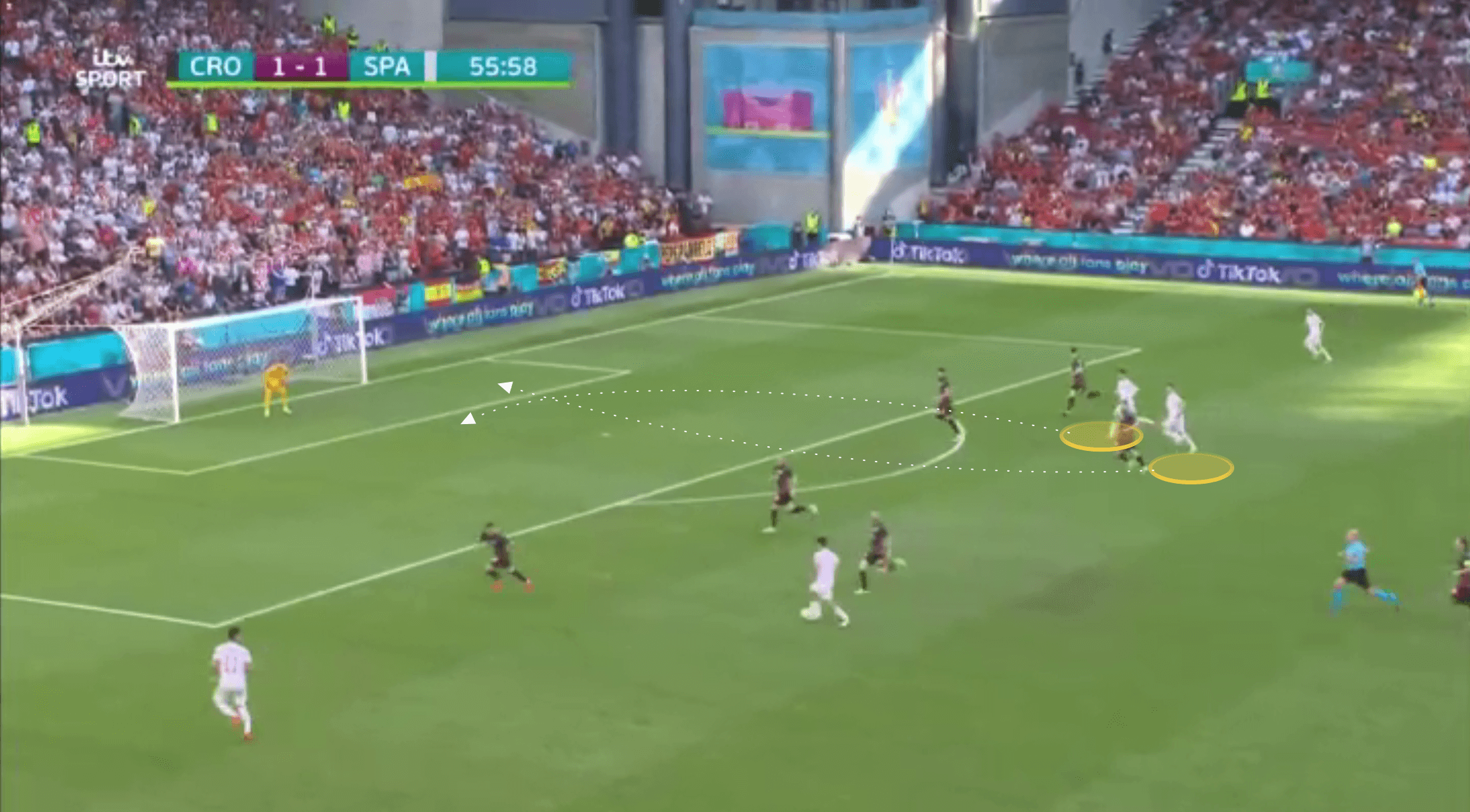 How Spain stretched Croatia using the width of the pitch

Croatia were content to allow space on either wing for the Spanish, and yet Spain were still able to make great use of it.

First of all, when playing against a low block and with plenty of possession, any team is going to have more crosses than they might expect to. Spain obliged in this matter, and on the whole, their delivery from wide areas was exceptional throughout the game. They consistently hit central areas, aiming for the second six-yard box with their crosses. A large portion of these deliveries came on the corner of each side of the box, but they did still get past the Croatian left-back Josko Gvardiol on a number of occasions and put the ball into the area from a more advanced position on the right flank. They targeted Gvardiol, with 62% of their crosses coming from this flank.

It was a similar story with their positional attacks over the course of the game, and whilst they penetrated the centre of the pitch a great deal, they generally preferred to ignore the left side and focused on hitting Gvardiol when constructing their attacks instead. 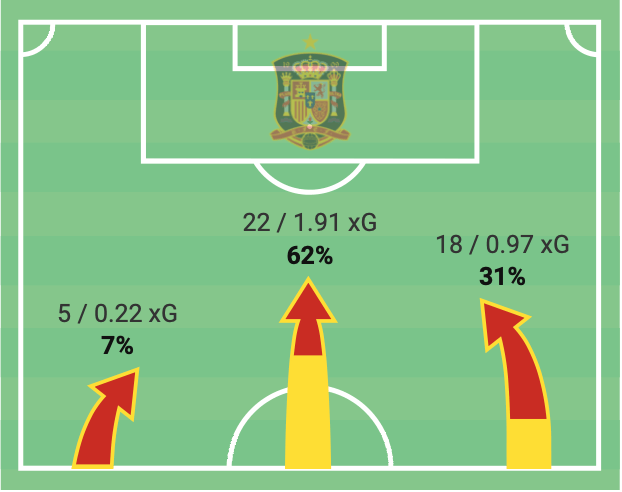 Further forward, in more advanced attacks, Spain would structure their in possession shape with the full-backs tucked inside. This provided protection should Croatia win the ball back and their centrally compact defensive shape transition into a direct attack through the middle of the pitch.

However, the presence of the wide winger meant this pass was always on, and there was the constant temptation for the Croatian full-backs to get drawn out wide. 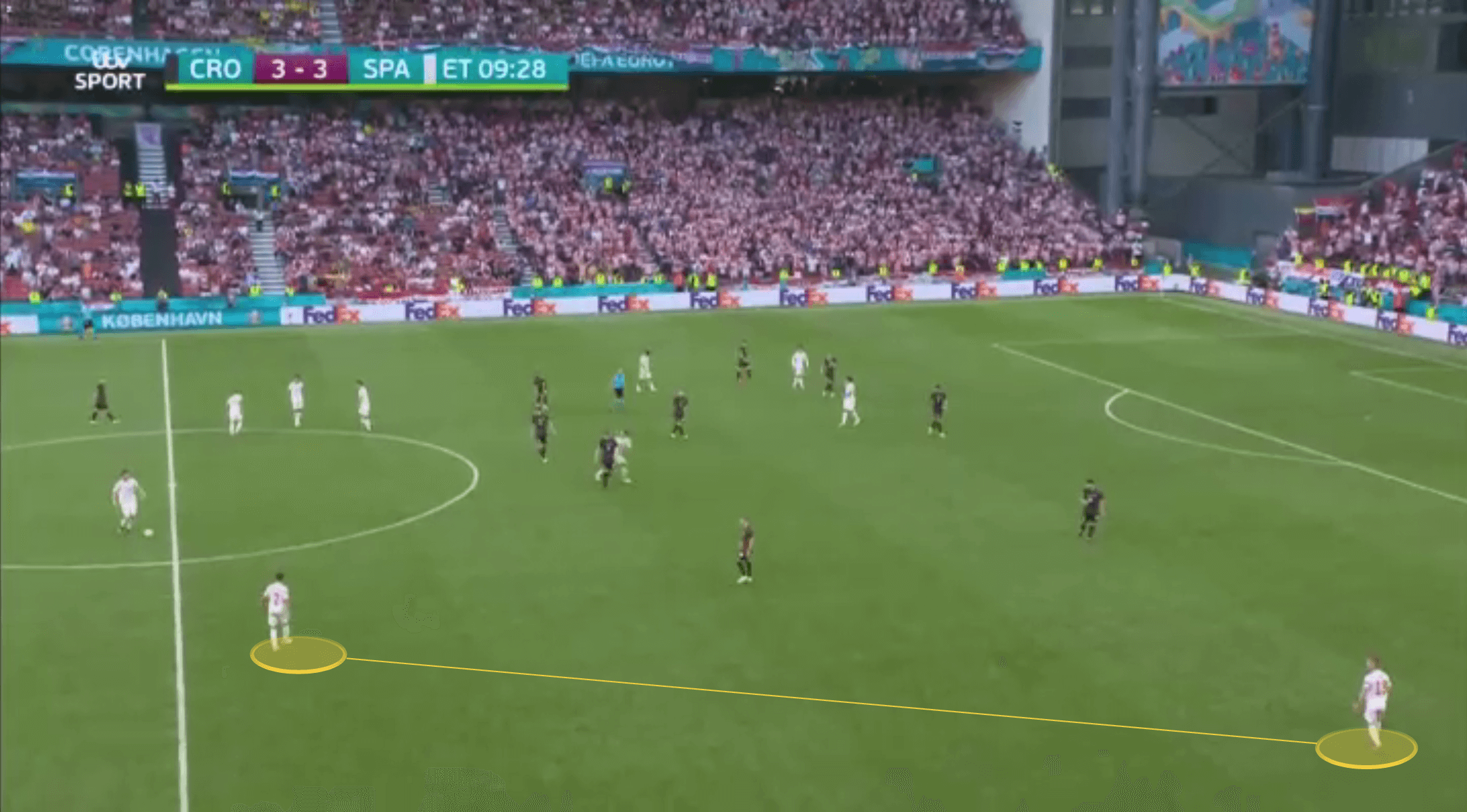 Spain’s midfielders would look to target the space in between the lines, what little amount of it there was at least anyway, but in doing so, ensure there were two attacking options overloading on the one full-back. We can see this occurring in the image below. 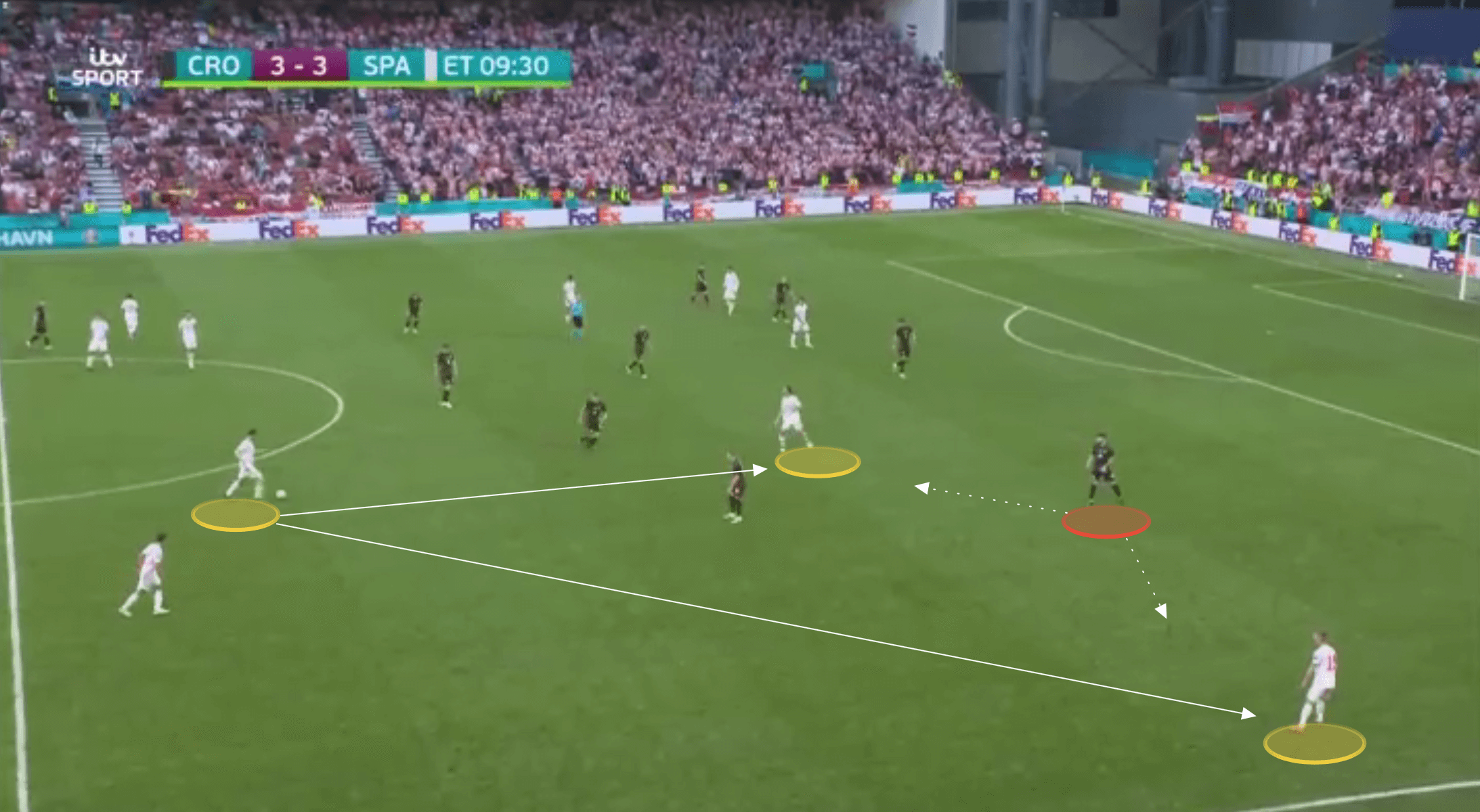 If the ball was played wide, the full-back would be forced to make the decisions as to whether to press the winger, or hold their shape. If they pressed, then the central-midfielder ghosting into the space between the lines could make the underlap behind them.

Otherwise, Spain’s wingers would look to draw in the full-backs anyway by simply driving at them and forcing them to have to engage. All the while, Spain would continue to have two options targeting the back post area, looking for that cross into the second six-yard box. 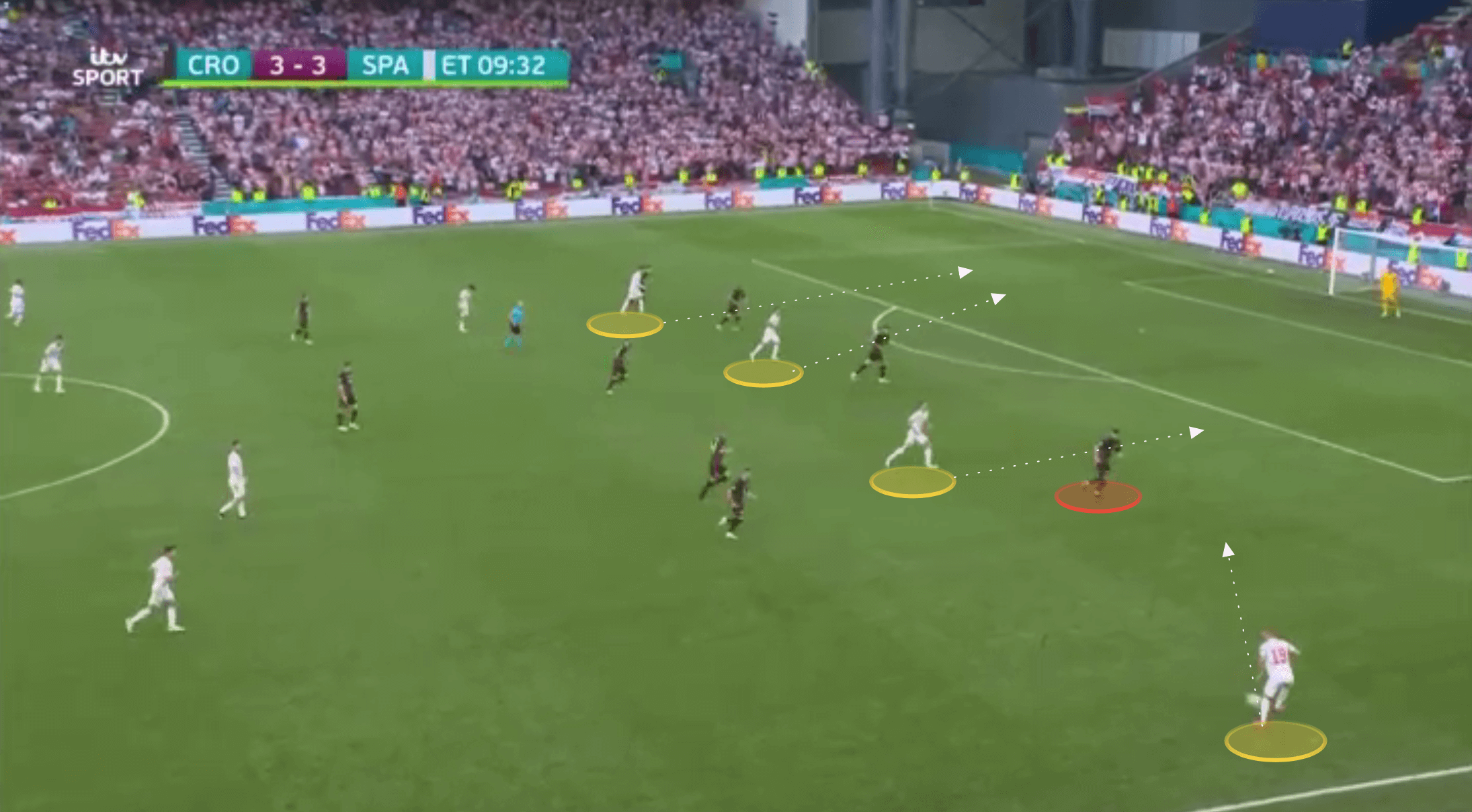 Spain used the wide areas to build-up in, knowing the centre of the pitch would be crowded. But they didn’t always seek to use quick attacks, and some of their best chances came through quick interplay in the wings or in the half-spaces. With numbers around the ball in these areas, Spain could combine with one touch football and easily overload the Croatian defenders.

This has the effect of drawing Croatia’s focus as a team to these areas, and it left space for the forwards to be left with space in the centre of the pitch. Below Morata drops away from the last line of Croatia’s defence and starts his run from a deeper position to evade marking. 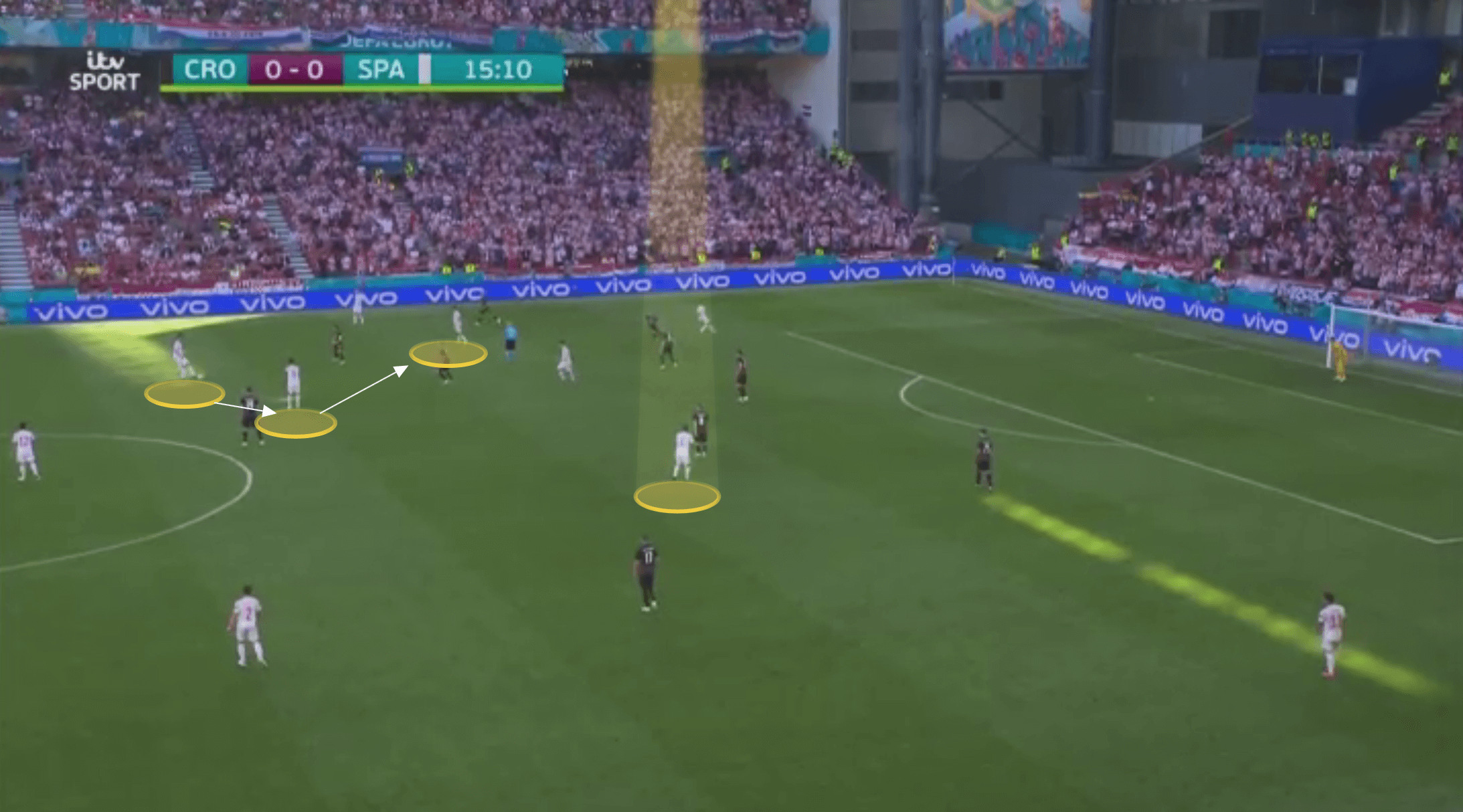 With the focus on Spain’s combinations in wider areas, Morata was then able to make his run into the space behind Croatia’s back line and be found with a through pass. 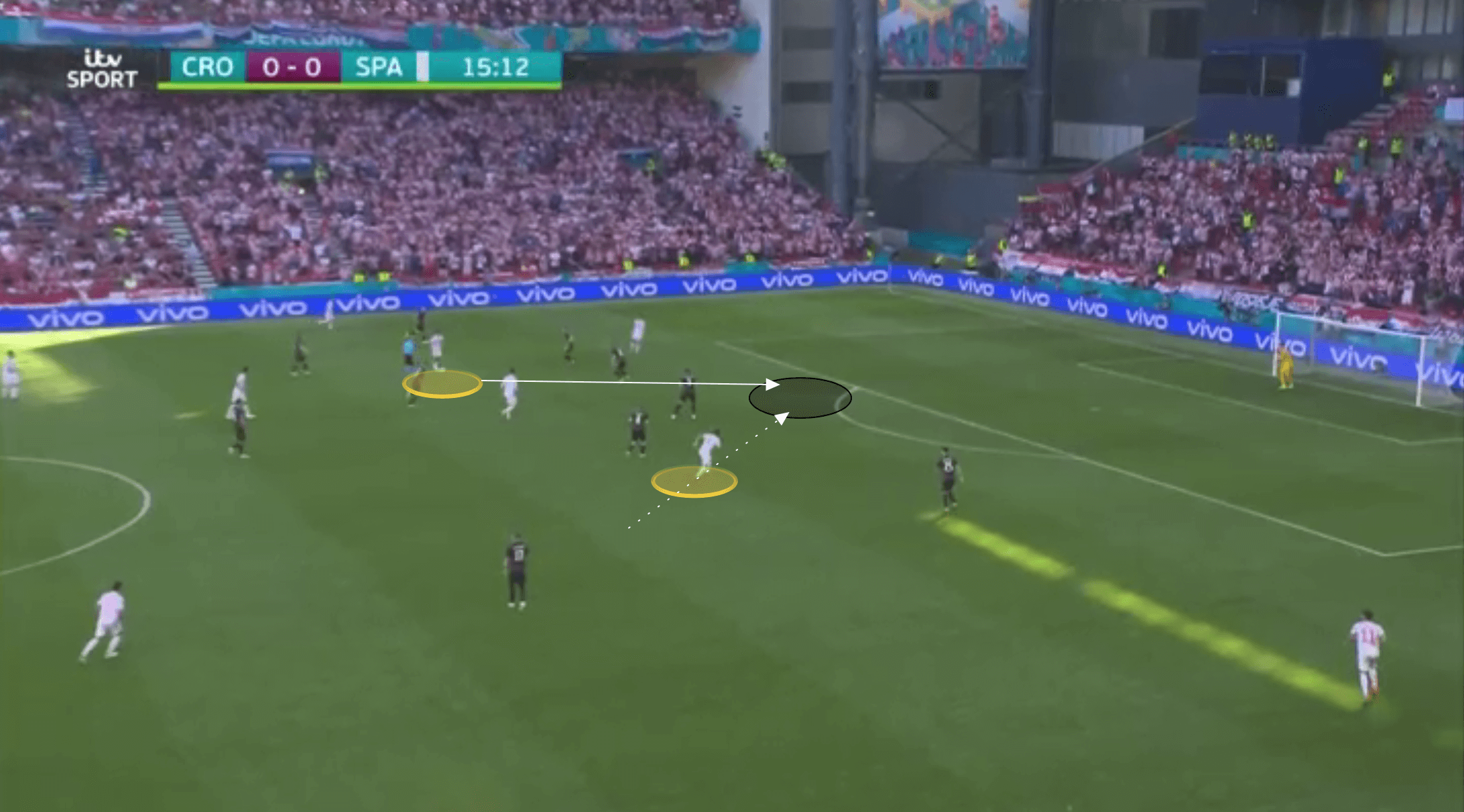 How Croatia got back into the game

Croatia were able to get high quality, high xG chances on goal, with less chances than Spain, but on average a higher xG per shot. We can see this by looking at their shot map below. Very few chances came from the right side, with most in and around the edge of the box just about in line with the left half-space. However, what is most noticeable is the significant number of chances close to, or inside the six-yard box. It is from these chances where Croatia hurt Spain and were able to score from. 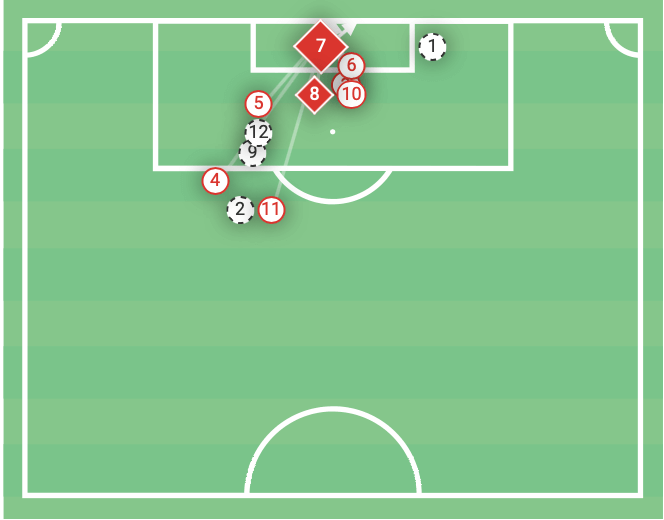 Just as the Spanish looked to use misdirection with two runners attacking one area in order to draw the defenders apart, Croatia did the same.

Late in the 90 minutes we saw them use this tactic to great effect to forge high quality chances close to the Spain goal. In the image below we can see how the Spanish centre-backs are still positioned in a compact shape, with two Croatian attackers arriving. 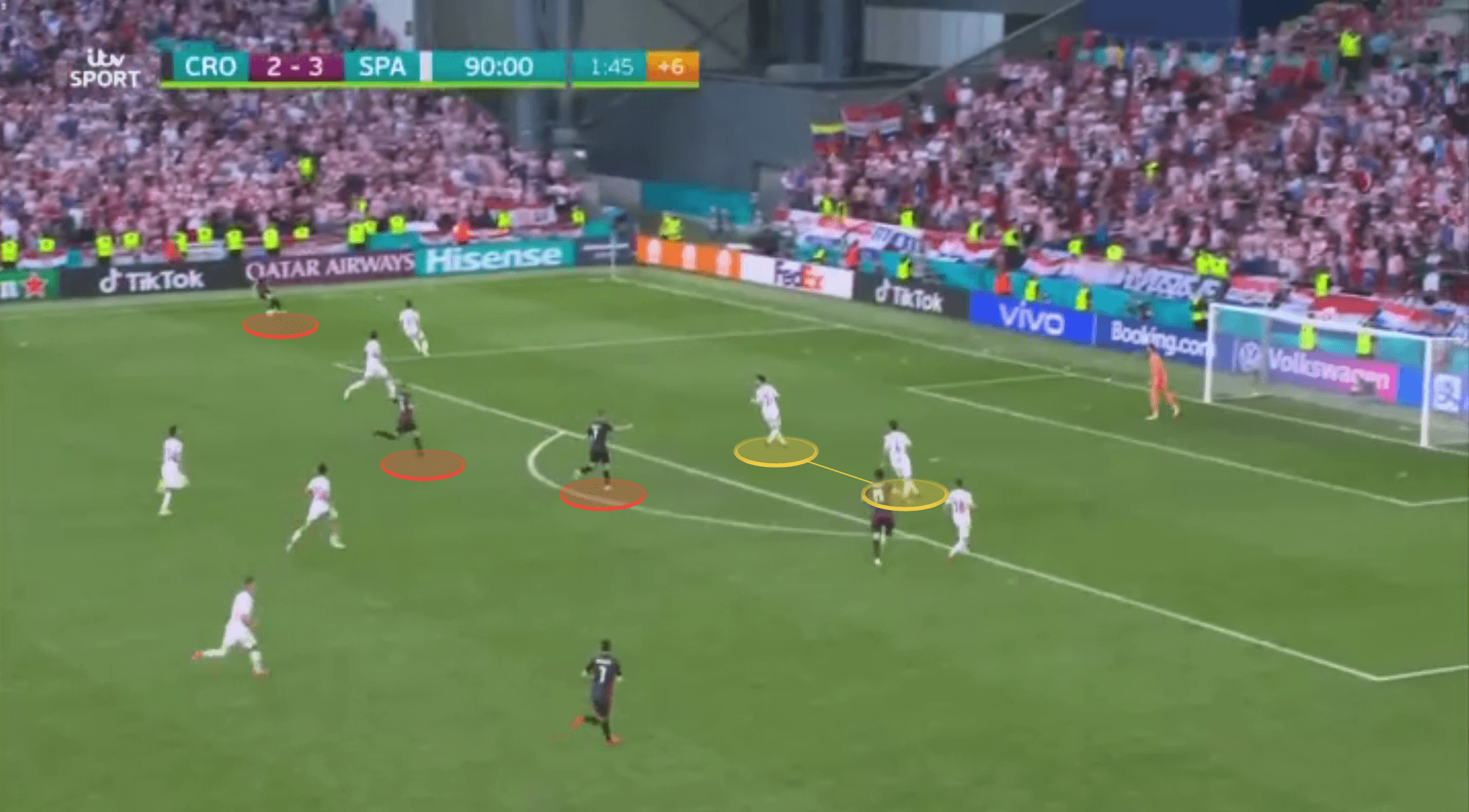 The far-side attacker made his run early, looping slightly towards the front post and drawing the near-side centre-back away from his partner a touch. 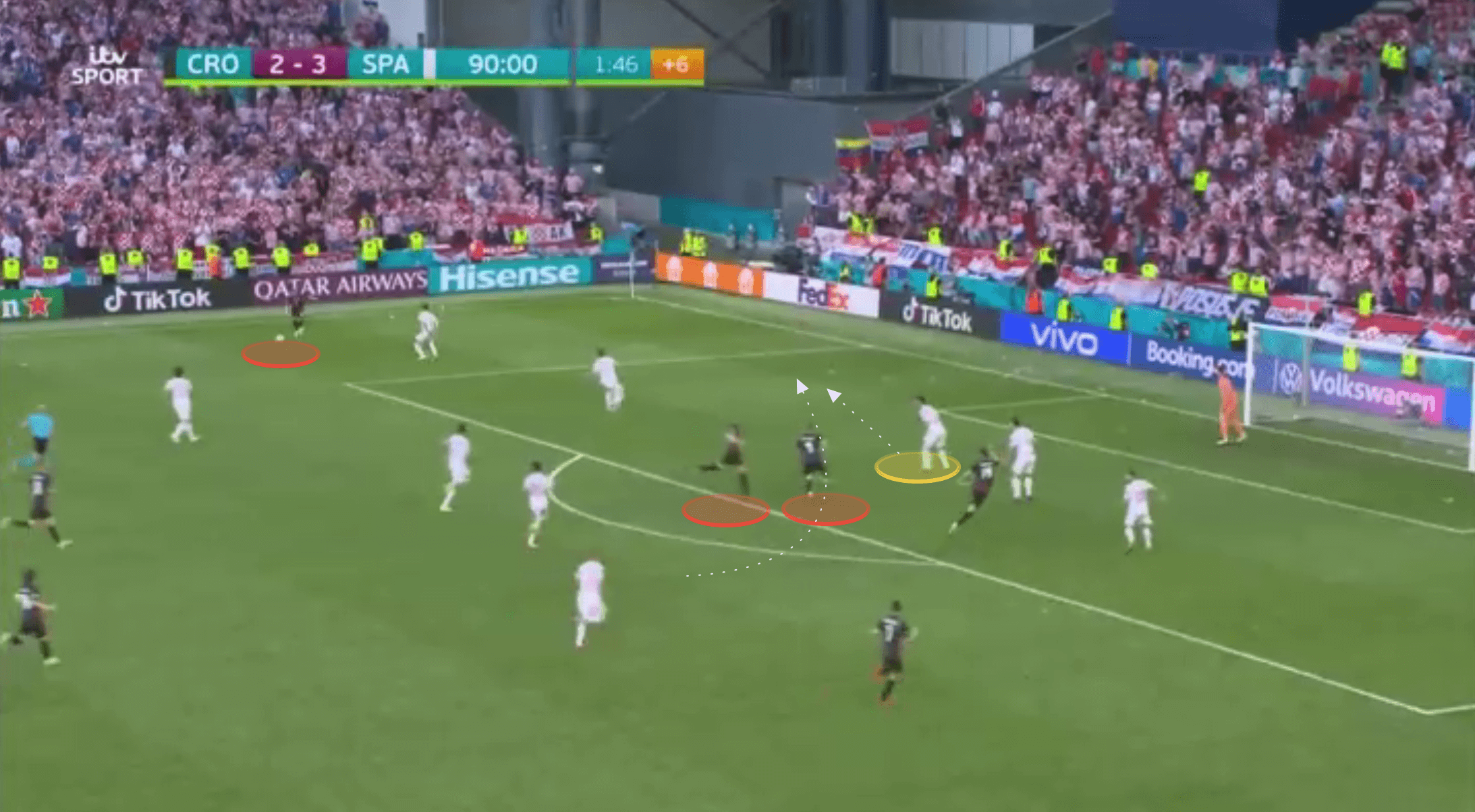 Mario Pasalic was then able to run directly into the space created between the two Spanish centre-backs where he could then head the ball home from close distance, thanks to an inch perfect cross. 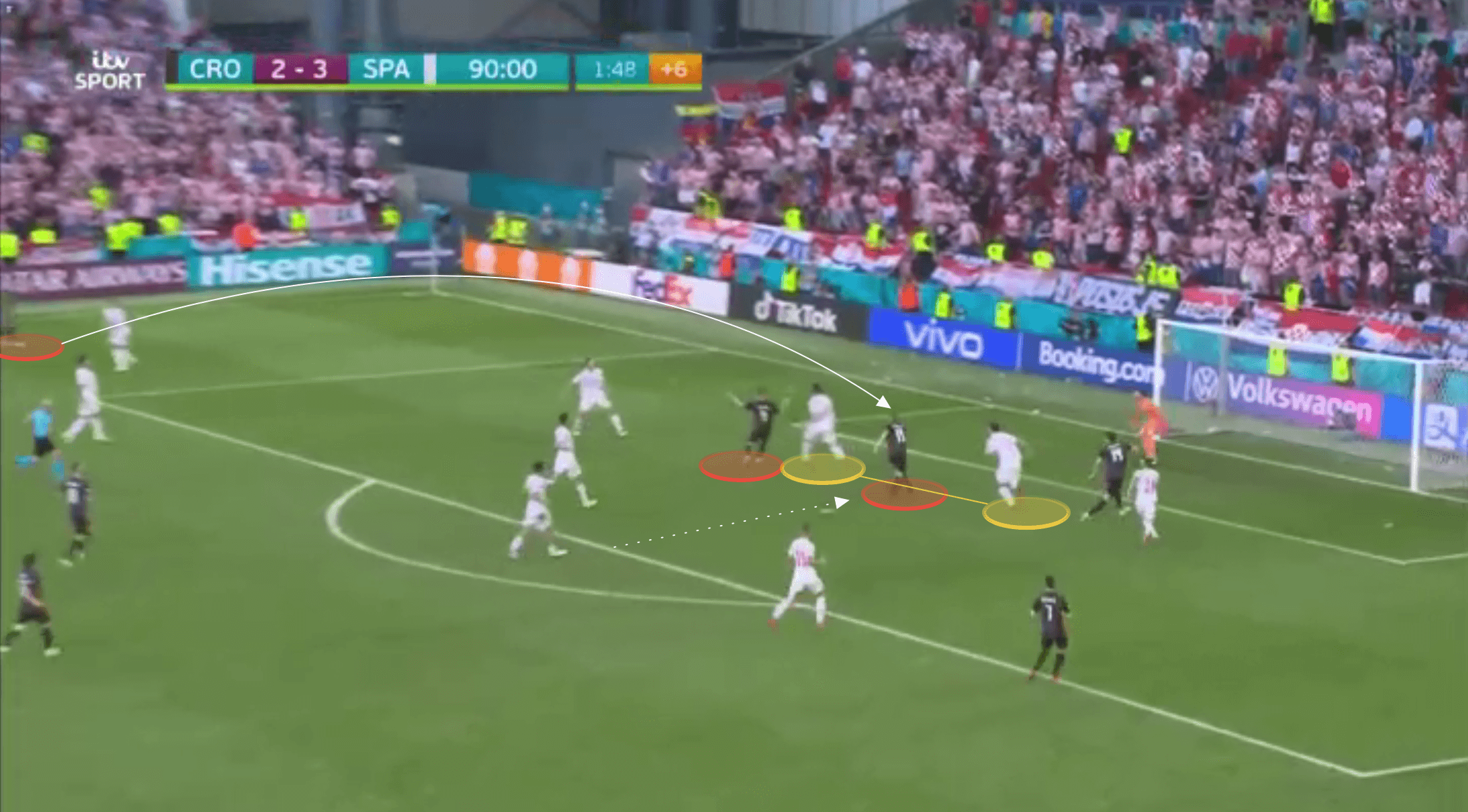 All of this action occurred on the same day Switzerland beat France in another barnstorming game of international football that may have rounded out one of the most incredible days of international tournament knockout football in recent memory. Spain had quietly gone about their business until this fixture, and teams will be looking at their firepower, but also at how Croatia managed to find weaknesses in their defensive structure. It is rare to concede three goals and still advance in a knockout fixture, but this is what Spain, and later Switzerland achieved. The quarter-final between those two sides promises to be an exciting one if Spain and Switzerland’s round of 16 games are anything to go by.