In their first matchday of the 2019 FIFA Women’s World Cup, 10th-ranked Brazil will meet 53rd-ranked Jamaica. In such a difficult group, a win seems like a must for both teams. Despite being in terrible form recently, having lost all of their last nine matches and losing superstar Marta due to injury, Brazil still go into this match as the clear favourite. In this tactical preview, we will take a look at both teams’ style of play and see what tactical match-up may unfold.

Jamaica forcing a battle on the wings

Jamaica are expected to abandon their favourite 4-2-3-1 to go with a 4-4-1-1 formation. They tend to use this defensive formation against big teams to ensure good defensive cover. They will definitely need a lot of that against a good attacking team like Brazil. We expect to see a lot of the play happening in their own half, as Brazil will push them deep back to their box.

Jamaica is a team still trying to play from the back. Their back four aren’t good passers, and their goalkeeper is familiar with launching the ball up high. During the qualifying campaign though, against rather weak opponents who sit deep, their goalkeepers gradually become calmer with the ball, staying a little bit higher and stringing together passes with the defence.

However, when strongly pressed by a top side like Canada, they struggled badly to make short passes and most of the time had to clear the ball away. This will probably happen once again against a team like Brazil. If Brazil can pin the opponent deep and force them to clear the ball aimlessly, it will be easy for Brazil to win a lot of second balls, as Jamaica’s front players will be isolated against 5-6 Brazil players.

As said, their back four are rather limited in offensive contribution; they will mainly stay narrow and compact and clear the ball often.

Jamaica’s backline will mostly stay deep, especially against a strong side. They use a stopper-cover combination, which have caused them quite some issues as this will leave gaps in the backline. This tactic will not work for them against Brazil, as Brazil’s front two love to drop deep and collect the ball, at the same time opening the space for the other forward, the wingers and central midfielders to exploit.

Jamaica’s young captain Konya Plummer is a quality, assertive stopper, but she will have to refrain from stepping up too high this time. Jamaican full-backs are not great at supporting the attack, preferring to maintain the defensive shape rather than making forward runs. Lauren Silver and Dominique Bond-Flasza can sometimes be more attacking when needed, but there will be too few chances for them to do so in this match.

Their double pivot often consists of a deep-lying playmaker who is crucial in getting the ball up the field, as well as winning back the ball when needed, and a ball-carrier who is expected to progress the ball to the attackers, the likes of wingers Jody Brown and Trody Carter. In the example below, you can see their double pivot circled in red and the compactness of the front players when defending. 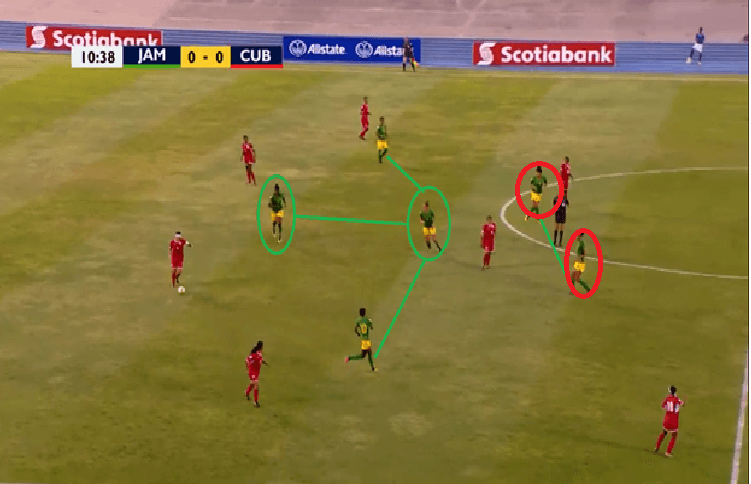 Their attacking midfielder is the advanced playmaker, looking to connect the midfield with the attack. She will probably spend most of her time defending in this match though. She may make up the front two in defending with the forward, as well as going deep to create a solid midfield three, aiming to block all the central penetrative passing options. Their main attacking options will be through the wings, with their quality wingers either beating defenders to cross in or cut inside.

They also have a good attacking option in Khadija Shaw, a tall and pacey forward with a poacher’s instinct, who can use her strength and speed to win aerial duels and beat defenders. She also shows great coordination with the wingers: they move together and are very fluid.

Their strategy for this match thus seems clear: back four and the double pivot (likely the attacking midfielder as well) sit deep and narrow, blocking the centre. They will soak up the pressure and look to hit the opponent on transition with the pacey front three. They have to clear the balls to the wings.

A big problem for Jamaica in this match is that their back three can be isolated if they stay high, as the other 7 outfield players will probably stay around the box most of the time. The wingers will be taken care of by Brazil’s full-backs, who don’t often venture too high up the pitch.

In addition, the two-banks-of-four system often requires wingers to support the full-backs in defence against the opponent’s wing overloads – which will definitely come from Brazil’s same-side wingers and forwards in this match. They run the risk of leaving centre forward Shaw alone against Brazil’s deeper six outfield players.

They are not expected to high-press Brazil as Brazil doesn’t really play from the back. They will instead try to get the ball quickly to the forwards, so if Jamaica’s high-press isn’t intense enough, they will be bypassed quickly and thus, become very vulnerable at the back. The main aim should be covering the passing lanes, especially from Brazil’s full-backs to their near-side forwards. If Jamaica do that well, it will frustrate Brazil and take them more time to get the ball up front.

Brazil, as the favourites, are likely to start their game in the usual 4-4-2 formation. They mainly attack through the wings, with the full-backs trying to find their dropping-deep near-sided forwards. The forward will now try to combine with her close-by winger.

Brazil have very technical players who can combine in tight spaces. The below example is typical in Brazil’s build-up. The full-back tries to find the forward, while the centre midfielder does not drop deep to get the ball. Instead, the likes of Barcelona Women star Andressa will stay high to win the 2nd ball and/or combine with the attackers. The full-backs, in general, don’t go too high up, especially when having to worry about Jamaica’s speedy wingers.

Brazil will definitely cause Jamaica problems with the wing overloads created by wide movement of the forwards. Jamaica will face big questions: should the centre-back step out of defence to leave gaps in the middle? Should the wingers stay deep and limit their chance of scoring from quick counters? (By the way, they normally don’t contribute a lot to defending as they want to stay high to combine with the forwards. More defending is definitely required of them this time). Should the double pivot helps the full-back and risk having a big hole in zone 14? Remember Brazil has quite a few good passers so any gap in Jamaica’s system can be exploited with Brazil players’ movement to there.

Brazil defend in a traditional, rigid 4-4-2. They will start pressing in the second line of engagement. As you can see below, their front two just try to block the passes through the middle. We can expect the Jamaica back four to have more of the ball than against the aggressive Canada, but since they don’t have great passers at the back, Brazil probably won’t be in real trouble.

However, Brazil’s fluid positioning will easily stretch Jamaica’s midfield four, and their back four will have to stay higher to maintain compactness, which they aren’t comfortable with at all.

Jamaica would be wise to play in a 4-1-4-1, meaning the attacking midfielder drops deep to become the third central midfielder, with a deep pivot below her. She will ensure there aren’t any gaps between the defence and midfield, making the dropping of the forwards less worrying.

A long pass to the forward is thus expected to be received with pressure from the pivot and the nearby central mid. The 2 central midfielders should cover the passing lane from the full-backs to the forwards. If they can do this effectively, a draw or more is totally possible.

Overall, this should be an interesting match to watch. Brazil will definitely look to break through Jamaica’s low block through the wide areas, while Jamaica’s hopes will rest on the shoulders of their quick front three. With better quality players, a Brazil win seems likely, but if Jamaica can stop Brazil’s monotomous build-up and hit them on the counter, things may go unexpectedly.