Spain overcame South Africa 3-1 in their opening game of the 2019 Women’s World Cup in an intriguing contest in Le Havre. Tournament debutants South Africa took a shock lead through Thembi Kgatlana’s sublime curling finish in the 25th minute, however, three late Spanish goals – two of which were penalties – ensured there was to be no upset. 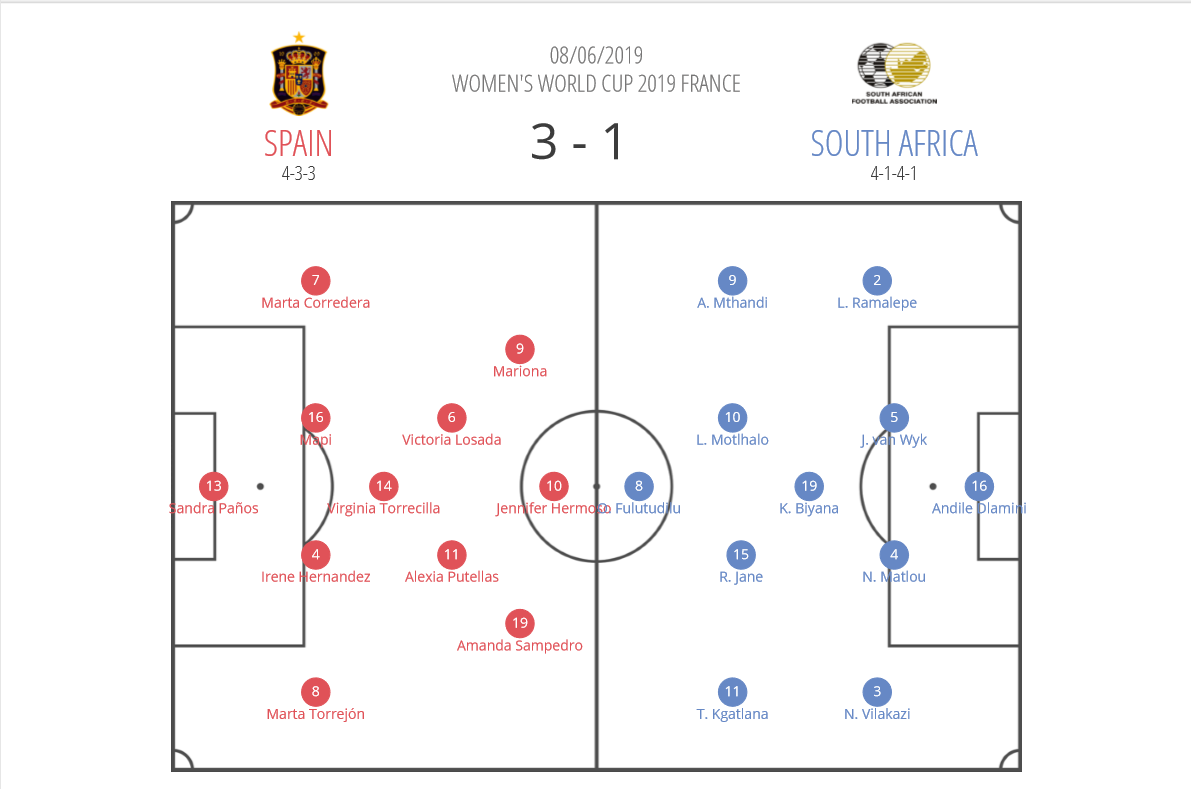 Spain opted for a 4-3-3 formation overall, with slight variations depending on whether they were in- or out of possession. Their wide attackers Amanda Sampedro and Mariona would occupy the half-spaces in order to create space for the full-backs, Marta Torrejon and Marta Corredera, to raid into.

As for South Africa, they looked to have an extremely compact midfield to try and disrupt the Spaniard’s flow. Their out balls came in transition, through the pace of Kgatlana and Amanda Mthandi out wide and Ole Fulutudilu up front.

In between the lines

In line with their country’s traditions, much of the Spanish team’s build-up play came through short, sharp passes between passing lanes. Their attacking midfielders looked to get in advance of the ball and drag around the South African midfield in order to manipulate their positioning to create spaces of which they could occupy – an example of which can be seen below. 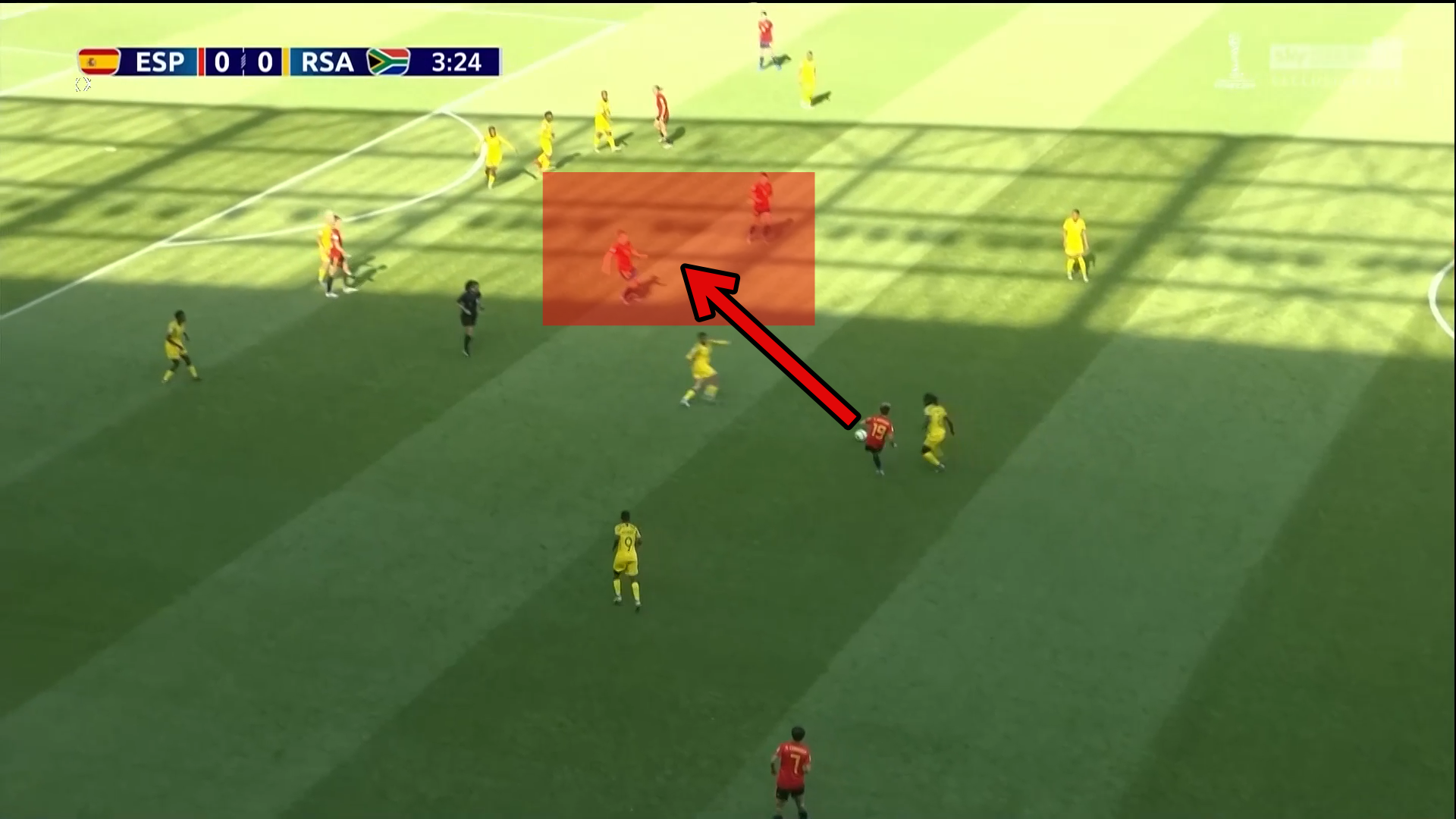 This tactic was made easier by the over-zealous nature of the South African midfield. They were looking to relentlessly press the Spanish midfield to try and minimise their time on the ball, however, this enthusiasm made them lose their positional discipline and instead opt to hunt for the ball.

In the above example, there are two Spanish midfielders in acres of space directly in front of the South African backline. Despite playing three players in the middle to try and prevent such situations, their will to press the ball had the opposite effect as it instead opened up huge gaps for creative Spain attacking midfielders to operate within.

The highlighted space is where the midfield trio should be if they wish to inhibit any central attacking threat – yet it is left completely unattended. Their high-energy approach may have appeared useful, however they would have been better off defending the zones as opposed to a player-to-player approach, which is vulnerable to manipulation of defenders away from the ball.

In addition to the positioning of players in the gaps between midfield and defence, Spain also looked to use a certain passing sequence to expose the ill-disciplined South African midfield.

They regularly played the ball into their striker Jennifer Hermoso (or indeed whoever their forward-most player was) who would hold the ball up before then playing it back from where it had come from.

This pass backwards was the key to this style, as it would drag the previously-retreating South African midfield further upfield again as they chased the ball. It can be seen below that, having gained the ball on the edge of the penalty area, Victoria Losada has a body shape with no intention of playing forward. She has closed off her left-hand side in order to pass the ball backwards, instead of playing the ball to one of her more-advanced teammates. 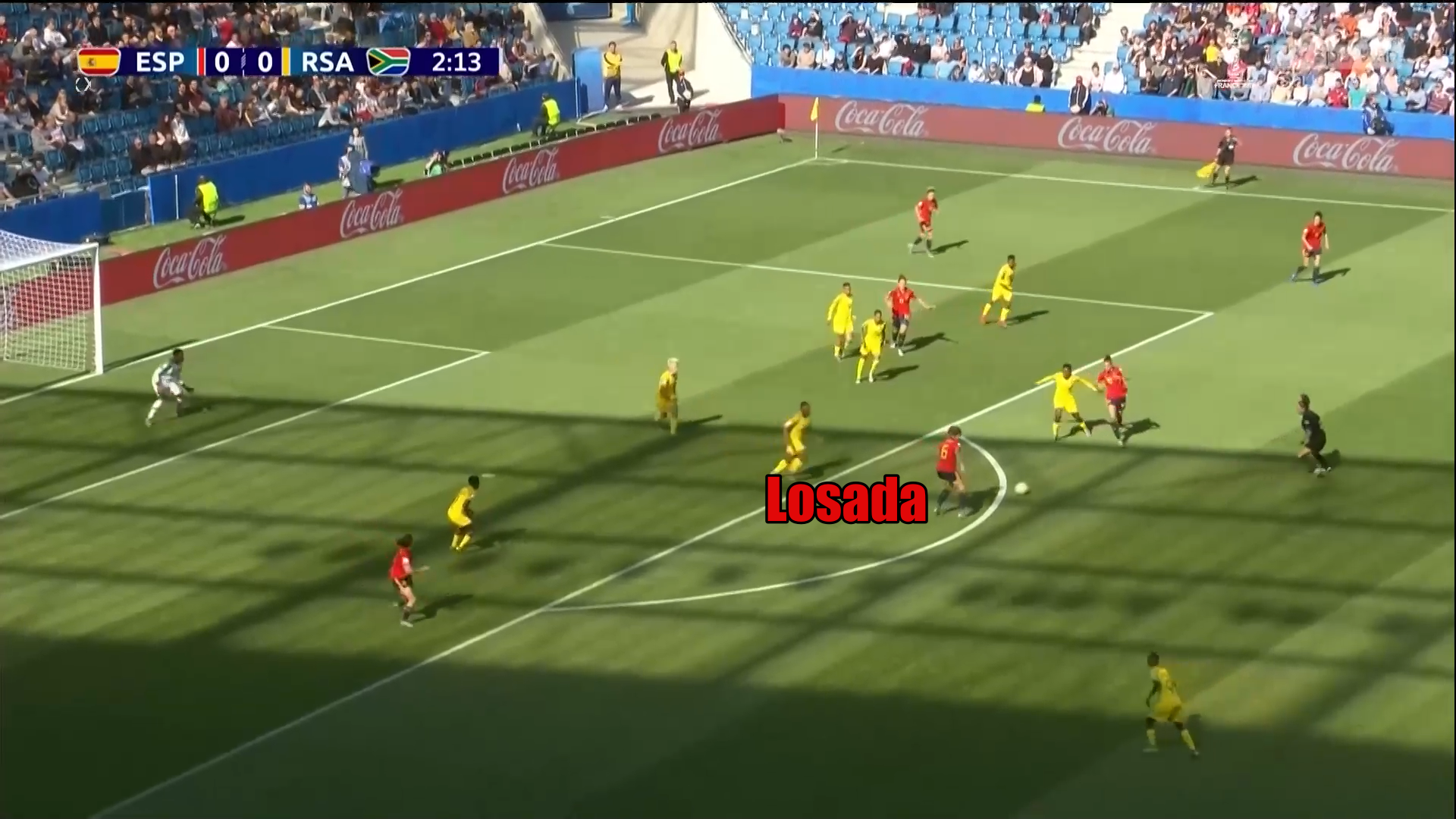 When the ball had gone back out, this would be the trigger for either a run in behind the defence and a ball over the top to the on-rushing forward or a pass into a now-free attacking midfielder between the lines with a genuine chance to create a goal-scoring opportunity.

Having given the ball to Virginia Torrecilla (below), this pass drew out the midfield and opened up various spaces (highlighted). Although in this particular instance the pass and run were out of sync (culminating in Hermoso being caught offside), it was a cleverly thought-out tactic from the Spanish team that they looked to replicate numerous times. 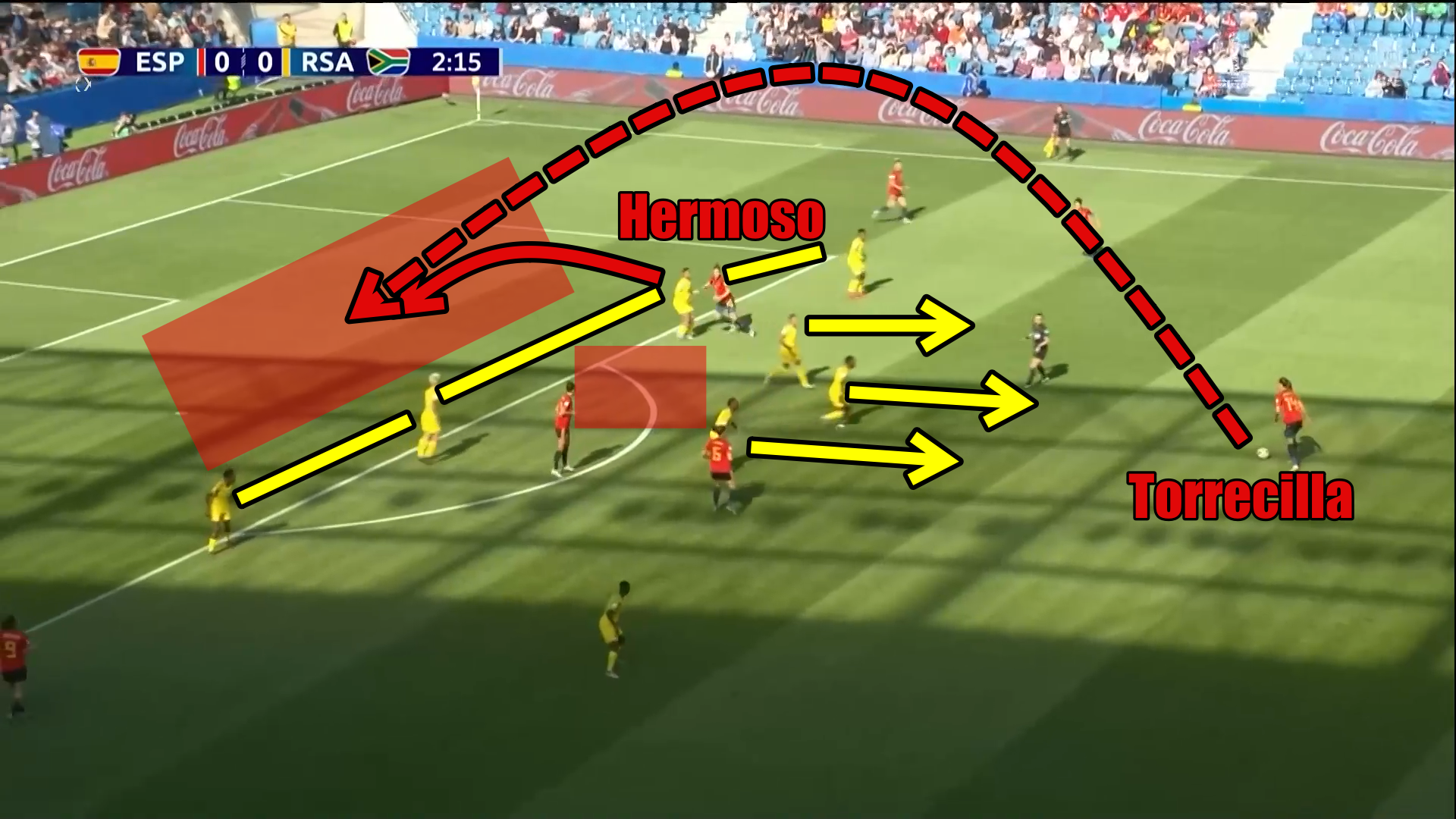 Possession was seven-tenths of the game

Such was their inferiority in terms of time on the ball – with only 27% of possession, something they indeed would have been aware of heading into the clash – then South Africa had to devise a gameplan to cope with long spells without the ball. They did so in two ways: one being the aforementioned midfield press; the second being trying to force the play down one side of the pitch before squeezing them into a tight area.

When the ball was in the Spanish defence, South Africa would allow the ball-carrying individual to initially step out with the ball before then initiating their squeeze. Striker Fulutudilu would press from side on in order to prevent the defender from turning back – thus limiting her passing options to only one side of the pitch. As a back-up option, the ball-far wide midfielder – Kgatlana in the below situation – would move into a striker’s position so that, if the ball was played back, she could funnel the Spanish backline back into the desired direction and thereby continue limiting the spaces of which the ball could be passed into.

Additionally, all three central midfielders were very tight to their direct opponents so that if the ball was played into them then they could be pressed from behind, facing their own goal. This reduces the likelihood of them being able to turn and drive at the defence.

However, despite this seemingly well-worked plan, incorrect positioning by one individual saw the whole set-up break down.

Mthandi was looking to screen any pass into the advanced full-back or wide midfielder. However, she is too far apart from her central midfield colleagues and thereby opens up a large gap between them. This space allows central defender Mapi, stepping out with the ball, to thread a ball through to Losada who can receive on the half-turn and then run at the South African defence. 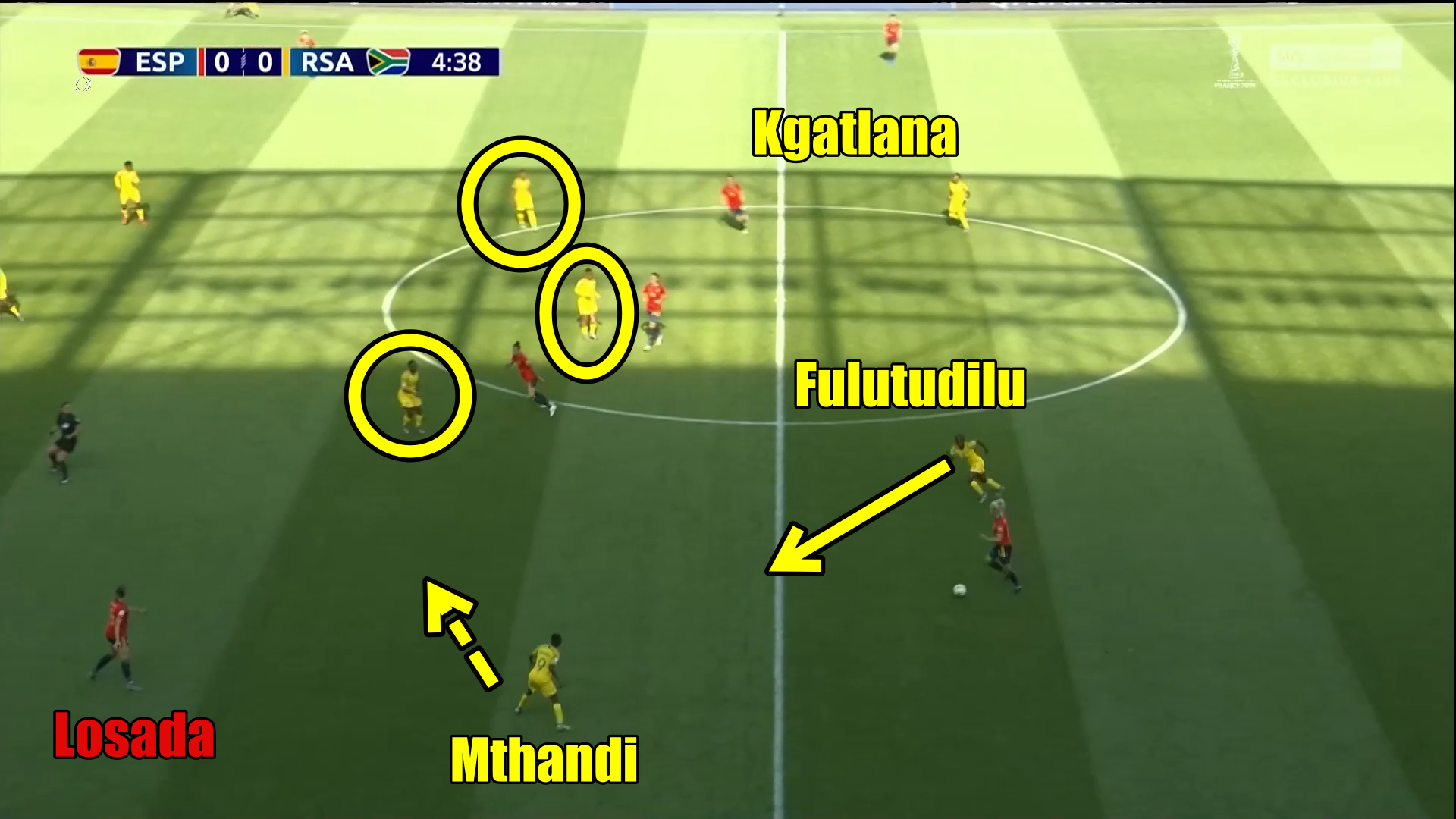 When Spain were looking to build up their attacks in-and-around the South Africa penalty area, their full-backs were key in providing options out wide. Yet in order to counter this, Banyana Banyana manager Desiree Ellis opted for a brave approach.

Mthandi and Kgatlana were instructed to not track their respective full-back the whole way back, instead positioning themselves in areas where they could be easily accessible should they win the ball back and look to counter-attack – and it was this method that yielded their opener.

Right-back Torrejon had advanced high up the pitch in order to support her team’s attack, yet upon transition was severely out of position. There was no cover from central midfielders, and so Kgatlana received the ball high in her half and drove at the Spain defence before eventually curling in a superb effort to put her side in the lead. 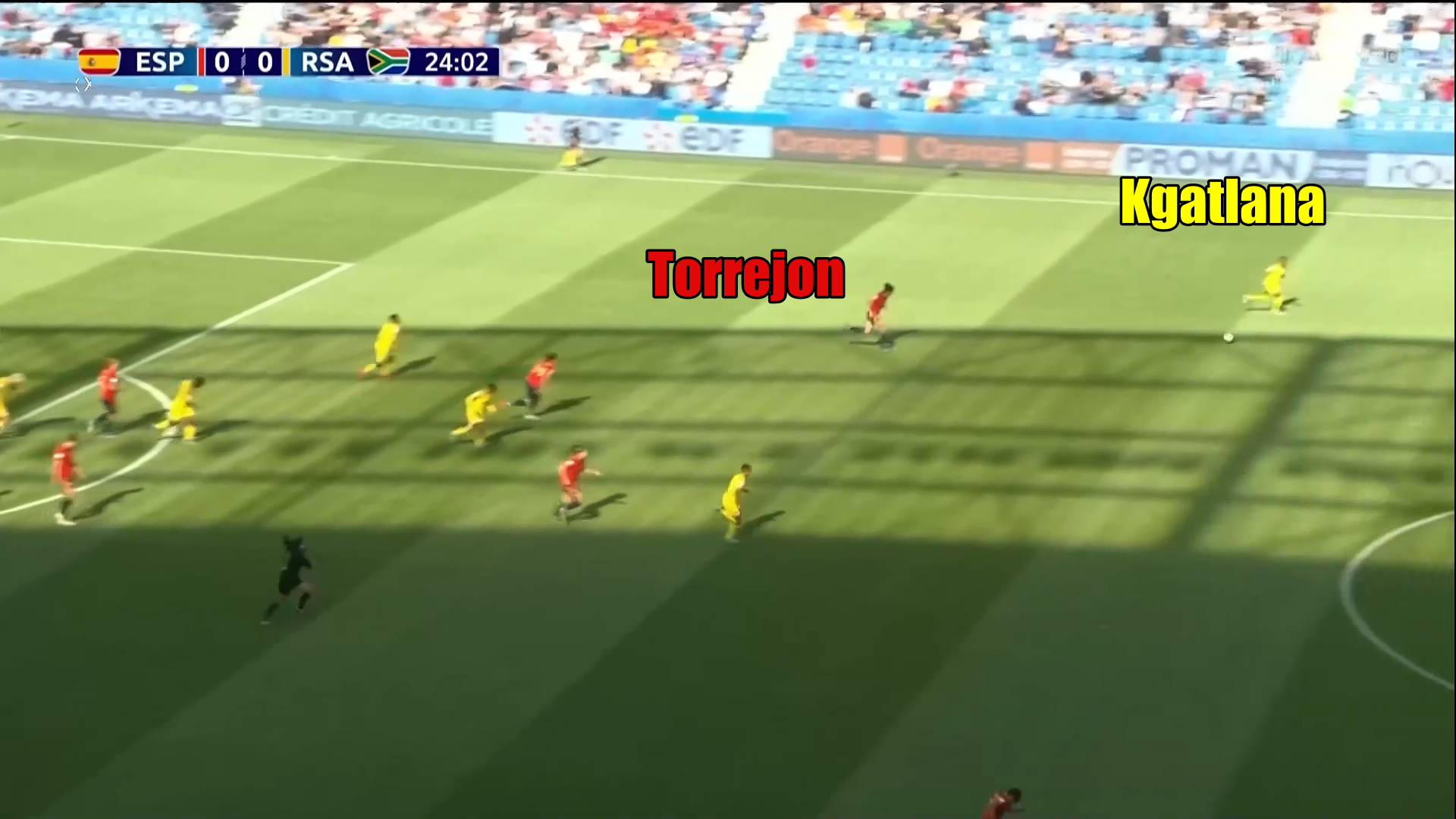 Despite their initial deficiencies, there were signs of a greater tactical appreciation from the South Africa midfield as the game went on.

They abandoned their hectic haphazard player-for-player press, instead opting to stay narrow as a trio and try to prevent any spaces opening up for Spain to operate in, as can be seen below. 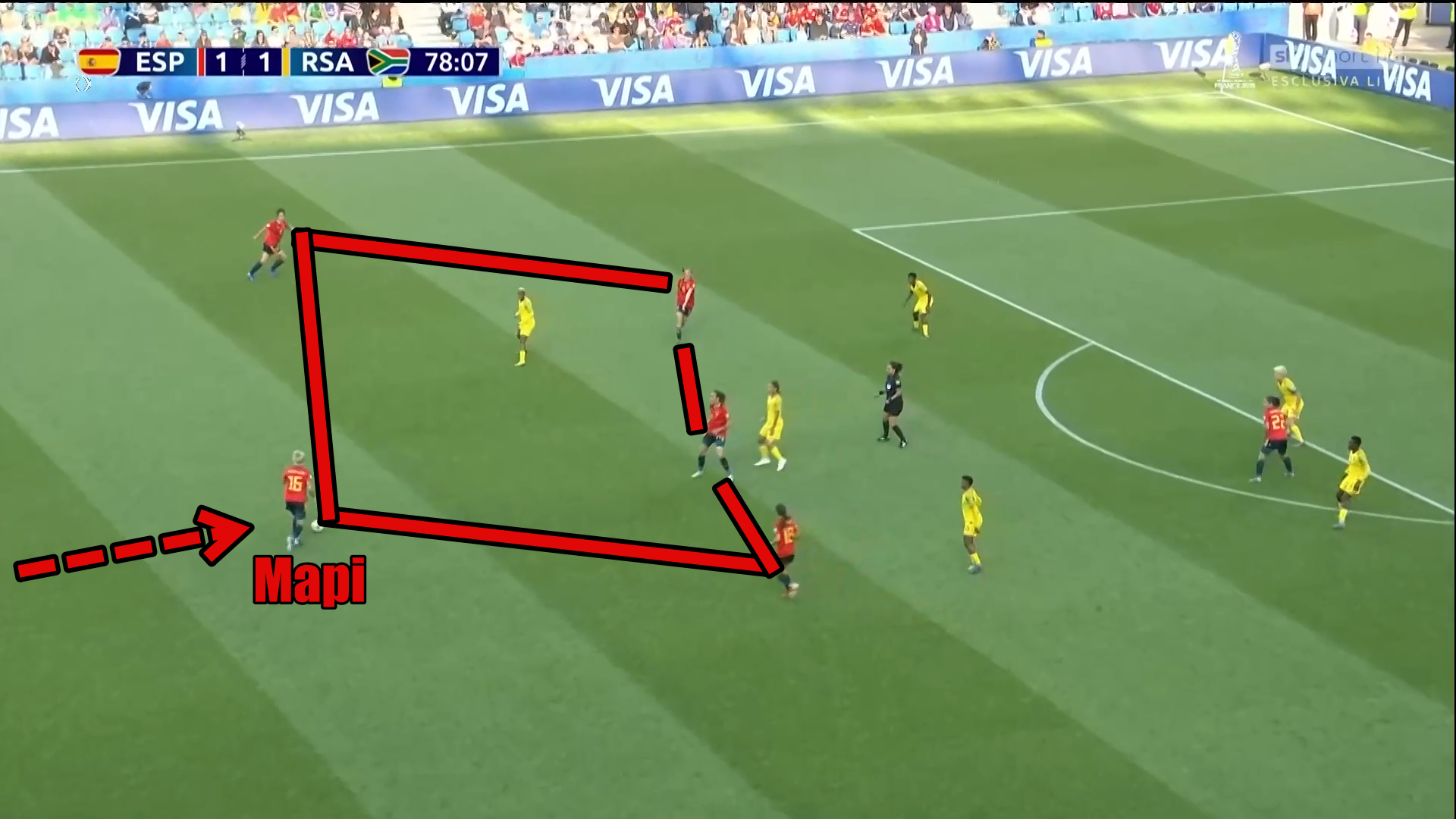 This change in plan meant that the Spanish could no longer bank on regular rotation and inter-changing of positions to create space, and instead had to look to a different way of attacking.

As they were sitting deeper, this tempted the Spain central defenders to advance further with the ball in order to create an overload in midfield, as Mapi did above. With their pace in attack, this also allowed Ellis’ outfit to utilise this speed in transition – as they did with their goal – due to the greater space in behind the midfield and defence as a result of the defenders stepping out with the ball.

There is no doubt that South Africa not only frustrated Spain but punished their weaknesses also in order to take the lead. As our analysis revealed, there could have been questions raised as to their approach at times, however, they did a good job in beating Spain for the majority of the game.  Ultimately, their overall superior quality saw Spain come out with the victory.