One of the greatest FA Cup rivalries will be resumed as Arsenal host Manchester United at the Emirates for a fourth-round clash. The Red Devils have blossomed since the arrival of Ole Gunnar Solskjaer and are now unbeaten in their last seven games. Getting maximum points under their ex-striker has boosted their confidence, and United are back to the eye-catching football they used to play.

Arsenal, on the other hand, had a sip of fresh air with their win against Chelsea last week after a solid team performance. Unai Emery didn’t cheat on his principles and once again surprised with the formation. His 4-1-2-1-2 turned out to be successful in applying a pressing style of play.

Although it is unlikely that both managers will name full-strength teams, it will still be interesting to see how are they match up. The Londoners are back to their defensive concerns as after a solid backline performance against the Blues as Hector Bellerin picked up a long-term injury. This makes it even harder to predict whether Emery will stick to the same formation, or whether he will switch to a three-man defence again.

The Spaniard’s injury might be good news for their rivals. With Marcus Rashford being doubtful for Friday though, Solskjaer has a difficult decision to make. Both Lukaku and Sanchez are waiting for their chance under the new manager. This analysis will use statistics to assess how both teams can get the best out of the situation.

The Gunners managed to apply a pressing style of play against Chelsea, one of the reasons for their successful performance. Unlike the Blues, United are not known hoard possession, so using the same strategy might not work out for Arsenal.

The Londoners should concentrate on not letting Paul Pogba spread the ball out wide. No matter whether the hosts go with a three or four-man defence, they might have problems blocking the inside channels that Pogba sometimes uses to distribute the ball further.

If Emery goes out with a three-man backline this would definitely expose Arsenal in the wide areas as the Frenchman will use the space on the left for the build-up. Bearing in mind Bellerin’s absence, this sounds like trouble. Going out with four players at the back doesn’t guarantee the team’s security though. With the full-backs’ responsibilities to help further up the pitch, this would create spaces for United’s attacking line to exploit.

This would be extremely dangerous if Solskjaer decides to position Jesse Lingard as a type of false nine as he did against Tottenham. This would give United even more options up front. His natural positional sense would help them use the half-spaces and take advantage of any disorganisation caused in Arsenal’s defence.

He could also be of help as a distraction. Trying to keep possession of the ball, focusing the Gunners’ defensive efforts on him, would open spaces for the wide attackers to surge into.

Emery will most likely give Guendouzi a chance in the starting XI to give Torreira some rest. This means that he and Xhaka should provide some support to the full-backs while helping with the transition too. Although the midfield diamond last week was successful it didn’t help in protecting the flanks.

That is exactly where the Red Devils are going to focus their actions using Young and Shaw. They try to stretch their opponents’ defence pushing high into their half. This happens thanks to Herrera and Matic who stay deep during build-up, providing passing options when United try to build from the back. 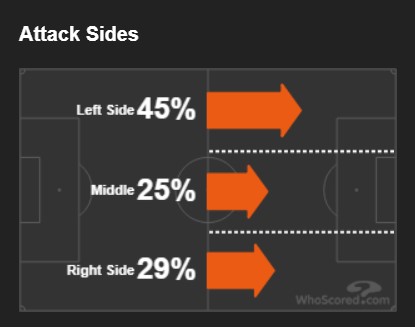 The influence of United’s left flank is apparent from the above diagram, which shows 45% of their attacks come from that side. This happens mostly when Young is positioned as a left-back, although this term he has mostly operated on the right. 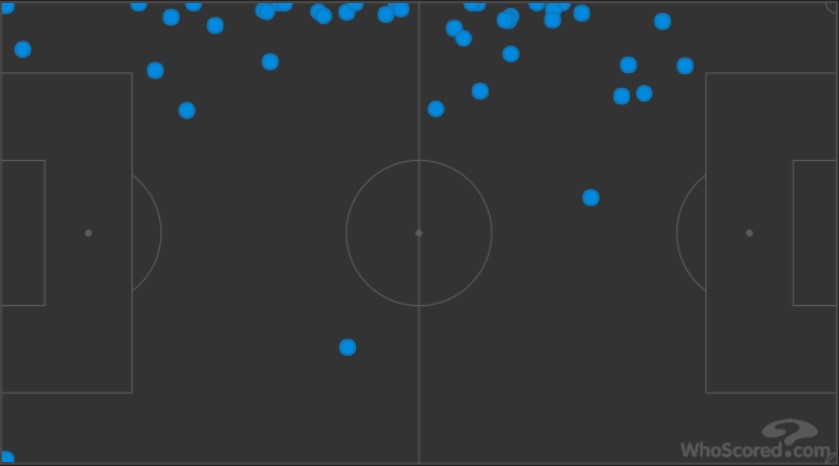 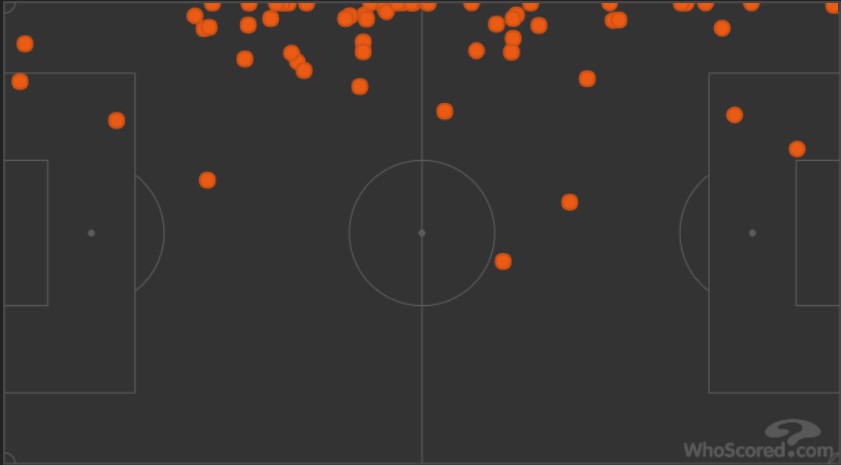 He is more useful on the left. In the first picture in blue are his 47 passes against Tottenham playing on the right-hand side. In the second one in orange are his 58 passes against Reading.

Although his advancing up the pitch is dangerous, Arsenal should take advantage of those moments and have their striker lying deep in the opposition half. Young’s adventures on the flank created some spaces against Spurs, as we can see below.

One of the rare occasions when Young was caught up the pitch resulted in Spurs attacking United’s right-back zone, with Kane darting into the vacant space.

With Guendouzi and Xhaka eventually pressing the full-backs and the wingers, having Mesut Ozil in a more advanced position would help with Arsenal’s build-up and distribution in the final third. This would help the team build their attacks from the back.

Ainsley Matiland-Niles as an option for Bellerin’s position might be the perfect solution for the team. His ball control and positional play are key to his performance. The youngster is a versatile player who could help on the flank, but also loves to cut inside.

Having Iwobi and Mkhitaryan occasionally staying up the pitch, for example, might help the Londoners challenge United’s centre-backs as they might not be able to cover all three front players.

With Arsenal’s injury saga continuing and bearing in mind United’s attacking options it will be hard for Unai Emery to find the right solution. The Londoners’ squad uncertainty might be crucial for the outcome of this game. Losing one of his most important players for the rest of the season and not having a great relationship with some of the others might cause the team some trouble.

On the other hand, Solskjaer seems like he has a planned every step of his journey as the Red Devil’s manager. It won’t be of a surprise if he gets what he wants on Friday.