It was 1994/95 when Real Sociedad last visited the Camp Nou and managed not to lose against Barcelona. On that day, La Real returned back home with a point after a 1-1 draw in La Liga, and on Saturday night, they were once again pretty close but the Catalan team ultimately prevailed.

After this big 2-1 victory against a tough opponent, Barcelona now have to secure six more points in the remaining five games, which means that victories against Alavés and Levante will see them lift the trophy once again. Of course, they must also bear in mind that the Champions Leauge semi-finals against Liverpool is looming just around the corner.

But Real Sociedad made sure Barcelona indeed worked extremely hard to earn these three points, and this tactical analysis will dissect the game to see what truly transpired in the Catalan capital. 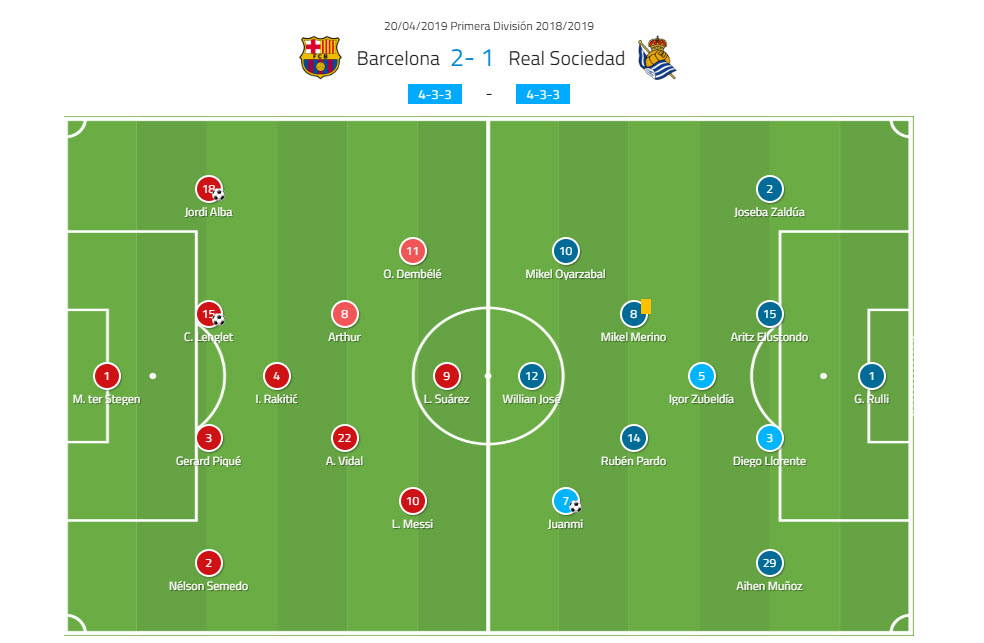 There are only really three positions Ernesto Valverde rotates on a regular basis and week in, week out, those three positions are the centre of speculation. If the Basque coach indeed decides to rotate he does so at the right-back position, in midfield and on the left wing.

This game was no exception as Nélson Semedo returned to the starting lineup after Sergi Roberto was chosen in the Champions League fixture against Manchester United. Arturo Vidal found himself on the team sheet in front of Sergio Busquets, who got a much-needed rest, and Ousmane Dembélé was once again in the starting XI after a longer spell of recovery.

The rest of the team was unchanged as Barcelona fielded a pretty strong lineup against a tricky opponent who has troubled them in the past. They operated in a 4-3-3 system that also saw no real changes throughout the match.

The away team was not as fortunate with injuries as the hosts were so Real Sociedad arrived in Catalunya with a somewhat diminished squad. A total of six players were missing for La Real, including the likes of Asier Illarramendi and Adnan Januzaj, both of whom have now missed multiple games in La Liga in a row.

As far as the lineup itself was concerned, the guests made a couple of changes since their last game in the competition, which was in the derby draw against Eibar. The big news was the return of Willian José, who had been suspended, as the striker led the line for Sociedad. The midfield saw Rubén Pardo combine with Oyarzabal and Juanmi while Barrenetxea and Sangalli were relegated to the dugout.

Real Sociedad opted for a 4-3-3 system to face their Catalan nemesis and their own curse of the Camp Nou stadium.

For the large majority of the game, Barcelona were not really able to cause much threat to their guests due to the compact and extremely well-organised defence Real Sociedad managed to deploy at the Camp Nou. Both sides are known for their good pressing mechanisms but La Real were able to utterly frustrate Ernesto Valverde’s side in this regard.

The key was limiting Barcelona’s tendency of building from the back. This was done by deploying a mid-to-high block in a narrow but very dynamic shape. The example below demonstrates how Real Sociedad’s forward three would press Barcelona’s centre-backs and the dropping midfielder, in this case Ivan Rakitić in the lavolpiana position, while the narrow midfield would man-mark Arturo Vidal and Arthur Melo.

This compactness meant that Barcelona would have to find solutions through their wide channels, through Jordi Alba, Nélson Semedo or the dropping Lionel Messi and Ousmane Dembélé. But with the lack of personnel and general numerical inferiority the Catalans faced on the flanks, Real Sociedad had a relatively easy job of suffocating them and creating overloads in their favour.

If Barcelona found a way to bypass their initial press they would stick to a certain pattern of movements that complemented their dynamic setup. The defensive midfielder Zubeldia would stay close to his backline or drop in line with them, depending on Barcelona’s progress. Meanwhile the midfield, the full-backs and usually one of the forwards would collapse on the flanks, covering any potential exits or advancements of the ball.

This tactic seemed to work wonders on both sides as the overloads prevented Barcelona’s most influential pieces from having their usual effect. Messi and Dembélé did not have the desired space between the lines and within their respective half-spaces while Luis Suárez was often found isolated among the white shirts.

Notice in the first image how Messi had to drop a lot deeper in order to be the man to start the attack. As a result, only Semedo and Suárez are in advanced positions and charging into the final third, while there are five Real Sociedad players already there and two providing supporting runs.

The image below shows the exact same thing but on the opposite wing where Dembélé is quickly collapsed upon as the away team push their right-back forward to press the ball-carrier. The midfielders drop deeper to provide assistance and guarantee numerical superiority.

Apart from their great defensive solidity, which was mostly expected, especially considering the venue, Real Sociedad surprised Barcelona with their aggressive, attack-minded approach to the game. Yes, their press was very well choreographed and thought through, but even though they rarely pushed all the way to Marc-André ter Stegen, they were extremely aggressive in their proceedings.

Applying just enough pressure and then successfully blocking the channels forced Barcelona into a lot of clearances and blind balls towards their forwards. The Catalans made a total of 20 on the night and most were aimed at Suárez, who dropped a bit deeper in order to receive the ball, hold up play and then send the ball forward.

This did work to an extent for Barcelona as they bested Real Sociedad in aerial duels but it rarely yielded any tangible results for the home team. Suárez would often win the aerial bout but was then either too isolated or too deep to keep the attack going.

This, in turn, played right into the opposition’s hand since their movement and positioning made it possible to turn defence into attack within a second. Most attacks followed that same pattern: Barcelona’s isolated striker won the first ball but since he was overcrowded, most of the time Real Sociedad would win the second ball and quickly transition to their attacking phase.

This is well depicted in the next example. Barcelona try to bypass the press via a long ball from the backline and they find Suárez, who wins the first ball. He cannot hold onto it though as he is quickly surrounded by multiple white shirts.

The ball is quickly recovered by Real Sociedad, and since they have multiple personnel to combine with, the transition is made extremely quickly. One through-ball behind the backline keeps Barcelona on their toes. Luckily for the Catalans, ter Stegen is alert and scoops the ball before any of the opposition players can get to it.

Another thing that was utilised by La Real was the inactivity of Messi and Dembélé. Both Barcelona stars were somewhat relieved of at least some defensive tasks so the Catalans’ midfield had to compensate for their absence. Pushing the full-back forward and getting the support from the midfield meant that the flanks were theirs to command.

Without Messi and Dembélé Barcelona sometimes had to commit all three of their midfielders to even out the odds. This, however, meant that there was no-one in the middle of the park, which in turn left pockets of free space for Real Sociedad to exploit.

Valverde also had headaches with Ousmane Dembélé’s positioning, both in attack and in defence. In attack, the Frenchman was mostly wasteful but still energetic. He used his pace well but didn’t participate in his defensive duties as much as his manager would have wanted.

In the example below, which is an extension of the attack that was created in the previous image, Dembélé stays far too narrow and leaves his man all alone. Real Sociedad used this to the fullest as their ball circulation did not suffer at all. As a result of that freedom, they went toe to toe with Barcelona in the passing game, completing 422/505 (83.56%) passes as opposed to 443/521 (85.03%) from the Catalans.

Combine this with their impressive skill to pass the ball through the lines, which was in full effect in the action that yielded them their only goal, and you have a real recipe for success. Real Sociedad completed six key passes throughout the game (Barcelona made only one more), and also managed 61.54% of all of their progressive passes.

It is not often that Barcelona struggle to create chances at the Camp Nou but this was truly the case against Real Sociedad. Their xG value of just a meagre 0.41 as opposed to 1 from Real Sociedad means that the guests probably deserved at least a point for their efforts.

And the overall play, as well as the nervousness around the Catalan squad, probably indicated they were really uncomfortable facing this resurgent away team that was going all out in order to avoid defeat.

Interestingly enough, Clement Lenglet’s first La Liga goal in a Barcelona shirt came from a set-piece. While it is definitely not one of the Blaugrana’s biggest strengths, they have scored 22 goals from them, which make them the most prolific set-piece team in La Liga.

The second goal came from Jordi Alba and a fantastic long-range effort on his weak foot, which was definitely a surprise. Still, the Spaniard’s involvement was not. Alba has been involved in more goals than any other defender in the competition this year with a total of two goals and eight assists.

This time around, he was on the other end of the famous Messi-Alba connection as the Argentine provided the assist, his 13th of the season, and Alba applied the finishing touches to get Barcelona the three points.

It might have looked shaky at times but victory was secured for Barcelona as their title chase comes closer to completion. Two wins in the next two games would indeed see the Catalan team retain their seat on the La Liga throne, and undoubtedly as the most dominant Spanish side of modern times.

Real Sociedad proved to be a much tougher cookie to break than was maybe expected by some, but Barcelona clinched another home win from the unlikeliest of sources; one from a set-piece, and the other from a long-range effort on a weak foot, and both from defenders.