Jamaica put in a spirited performance but were no match for the prowess of the Australian side. This tactical analysis showcases the key tactical points from the game. 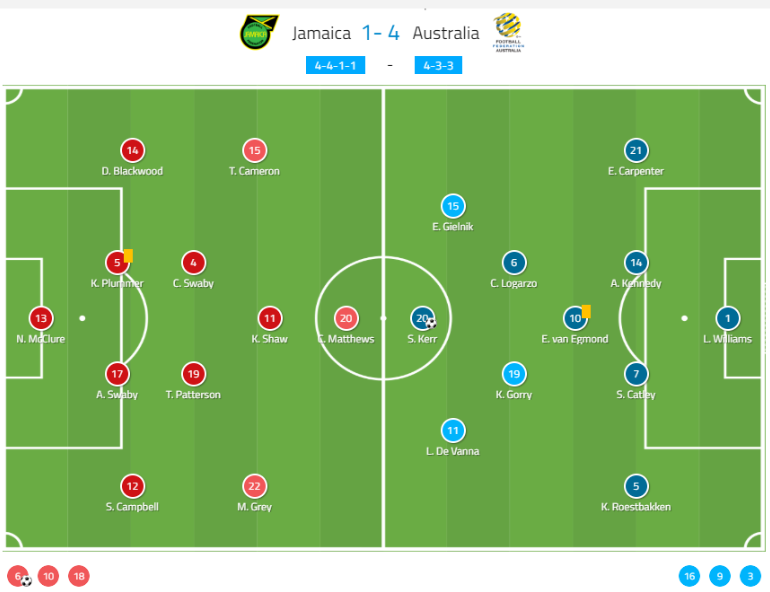 Australia opted for a traditional 4-3-3 with Sam Kerr leading the line. Emily Gielnik and Lisa De Vanna were the wingers. In midfield Chloe Logarzo, Katrina Gorry and Emily Van Egmond made a trio.

Jamaica’s approach was to concede possession and hit Australia on the counter-attack, a strategy which did not work well for the Reggae Girlz in the first half. As has been the case on many occasions in this tournament, Jamaica were let down by individual mistakes when it came to defending collectively. Jamaica defended in a compact 4-4-2 with both strikers dropping deep to help out defensively.

The main outlets for Jamaica were the wingers, Tiffany Cameron and Mireya Grey. The duo were actually very effective on the wings, taking advantage of Australia’s tendency to maintain a high line and keep their full-backs high up the pitch. In many instances, either Grey or Cameron had acres of space ahead of them and were able to bring the ball into dangerous areas only to be let down by a lack of options to either cross or pass to. Given Jamaica’s conservativeness, neither their full-backs nor the midfielders were keen to make their way up the pitch even in possession.

The only exception to this lack of attacking impetus was Khadija Shaw who was a constant menace to Australia’s defence. The imposing striker was playing in a more reserved position in this game, almost as a second striker but made a great effort to contribute defensively but make her way up the pitch whenever possible.

Shaw almost broke through the Australian defence on a couple of occasions and despite Jamaica’s lack of possession, looked like a genuine threat. Shaw’s pace, movement and strength were fantastic but she struggled to finish at least two to three good chances that she created for herself. Jamaica had no shots on target in the first half and was arguably the worst of their tournament so far despite heavy losses to Brazil and Italy.

Intense second-half from both sides

The situation was reversed in the second half as Jamaica came flying out of the blocks. Hue Menzies’ side pulled a goal back through Havana Solaun. Jamaica looked like a side wanting to make the most out of their time in France. The Jamaicans began pressing Australia intensely, pushing their wide players higher up the pitch and encouraging more width in their play. This intensity caught the Australians off guard as Jamaica created at least three clear cut chances which they failed to finish. With Jamaica pressing in packs, Australia found it impossible to play out from the back and conceded fouls in dangerous areas as a result. The static 4-4-2 employed in the first half became an aggressive 4-2-3-1 with Shaw as the sole striker.

Unfortunately, just as Jamaica were looking like equalizing, another defensive error allowed Sam Kerr to bag her hat-trick and make the score 3-1 to Australia. After this goal, Australia were on the ascendency as they pushed forward relentlessly giving Jamaica no space or time on the ball. Jamaica’s passing was extremely poor as they had just a 69 per cent pass success rate compared to Australia’s 84. However, Jamaica collectively made a massive 24 tackles and 30 clearances, only to be let down by momentary losses of concentration.

The first three goals conceded by Jamaica came as a result of their inability to deal with any attacks that Australia fashioned from the wide areas. Australia peppered the nervous Jamaican defence with crosses. Despite a mammoth effort from Konya Plummer, Jamaica could not deal with Kerr’s intelligent movement between the centre-halves. Although Jamaica had the physical advantage, there was no communication between the defenders which enabled the likes of Kerr to ghost in between the defenders and score easily.

Australia were excellent in the first half, maintaining the pressure on Jamaica and retaining possession. They managed to exploit the most obvious flaw in the Jamaican defence to its full extent and the dribbling and overlapping of the Australian wide-players was too much for Jamaica to deal with. Australia’s right-back, Ellie Carpenter caught the eye with her forays into the opposition territory. She combined excellently with Emily Gielnik as the latter assisted Australia’s first goal with a dangerous cross from wide.

Australia’s 4-3-3 was a perfect blend of fluidity and width in attack. Despite their formation being a 4-3-3 on paper, it was actually 4-1-4-1 for the majority of the game. This was due to the tendencies of both Chloe Logarzo and Katrina Gorry to move into wide areas and bring a numerical superiority.

This was especially evident in the first-half where owing to Jamaica defending deep, both Logarzo and Gorry tried to help their full-backs and wingers to create 3v2 situations. This did the trick as some quick interchanges and passing were enough to ensure minimal resistance from Jamaica. After Jamaica’s early goal in the second half, the duo were more cautious and shifted into a traditional 4-3-3 alongside

Sam Kerr put in a five-star performance in this game, scoring all four of Australia’s goals. The 25-year old’s movement and finishing were impeccable. The first two goals came from headers, both of which were created thanks to some intelligent movement and smart finishing.

Kerr was integral to Australia’s pressing as she led from the front, both as a captain and as the lone striker. This persistence paid off as she forced the Jamaican keeper into an error to bag her fourth goal. Kerr’s energy and dynamism bring a great deal of aggression to the Australian side.

In the end, the result represented the gap in quality between the two teams. Australia were clinical and ruthless, mounting attack after attack and got the job done. Jamaica can take great heart from the number of chances they created. In fact, Jamaica had 11 attempts on goal, just behind Australia’s 13 but only three of these were on target. Australia came out on top and took all three points without too many issues.