Italy vs Brazil is a superb matchup among the men but in Women’s football is also a great clash. Now, in the last round of the group stages of FIFA Women’s World Cup, it has an own flavour due to the previous results, Brazil – the big favourite in this group – ended up in a tough situation. If Australia wins over Jamaica they need a huge victory in this match in order to get the second position in the group and be able to advance to the next stage. However, Brazil were only able to produce a small 1-0 victory, which means, alongside Italy, Australia will go to the best 16. This tactical analysis will reveal what happened with Brazil against Italy. 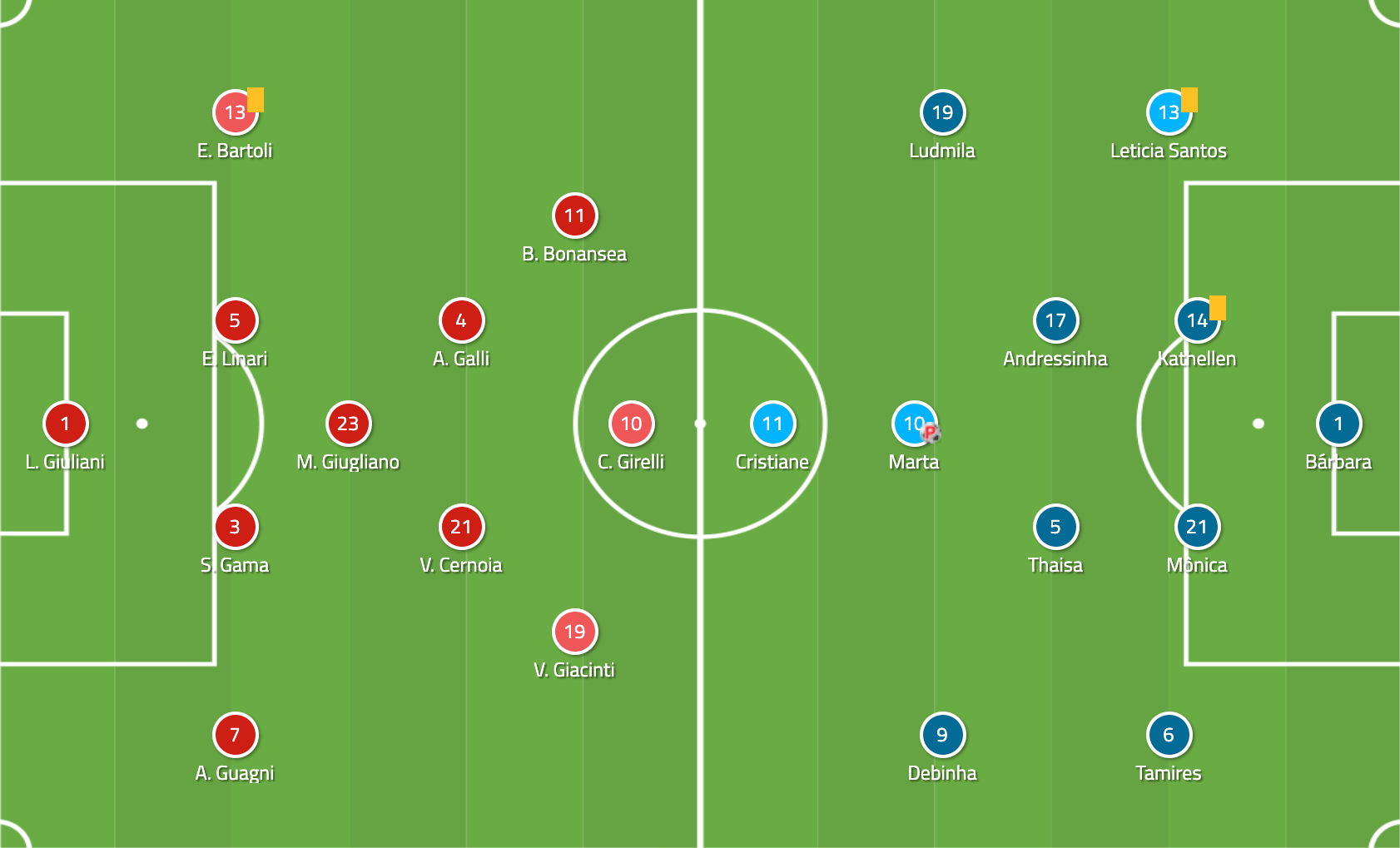 On Italy side, they operated with their usual 4-3-3/4-3-1-2 setup with only a few changes in the team selection. Bertolini made one change in the attacking department, Giacinti played instead of Sabatino. The midfield three of Cernoia, Giugliano and Galli restored as Galli returned to the starting lineup after the Jamaica game where by the way, Bergamaschi was deployed. Cernoia and Galli switched positions but interestingly, mostly Galli was on the left and Cernoia on the right. Lastly, the defensive unit stayed in the same as against Jamaica.

Meanwhile, Brazil deployed a 4-4-1-1 formation thus they used a bit more offensive system than in the previous game, against Australia, although still not as brave as against Jamaica where they formed a 4-4-2 shape. Upfront, Rozeira as usual, and Marta were a bit deeper, mostly in the #10 space in a quite free role. In the midfield, Andressinha replaced Formiga to pair up with Thaisa in the middle. Thaisa was in the more defensive role, for example, in possession she occupied deeper, while Andressinha had licence to push forward. Furthermore, Ludmila da Silva played instead of Andressa Alves on the right wing. The defence lined up in the usual selection of Tamires, Mônica, Kathellen, Letícia Santos.

Italy prepared for this clash with a pretty simple strategy, they deployed a more defensive approach thus allowing higher possession rate for the opponent and rather emphasising on the counter-attacks.

One of the most interesting patterns in Italy’s positioning in possession was the asymmetric setup. Giacinti often occupied in the centre or the left half-space leave the right wing open for Cernoia to fill. With the tendency to occupy the left side, Italy aimed to overload Brazil’s last line and create enough support for each other to outplay the defence and reach the final third. 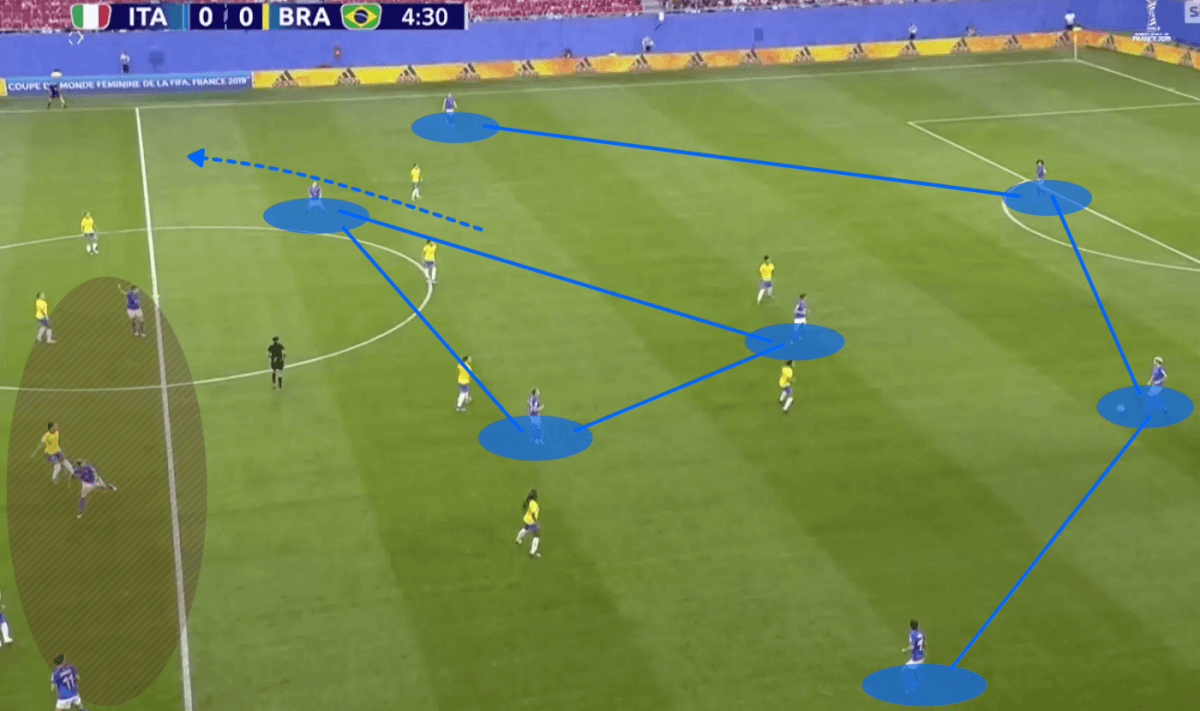 Although they did not sit too deep, they used the usual pressing scheme in those situations when Brazil tried to play out from the back. Right from the beginning, Italy pushed up to press.

The basic idea behind this scheme is to block the central area. When the ball was on Kathellen, Girelli moved forward towards her whilst cover shadowing the passing route towards the deepest midfielder (Thaisa). Giacinti moved infield to mark Thaisa and Bonansea aligned herself in between the opposition full-back and centre-back. Occupying in the half-space to gain access to the full-back. Moreover, Cernoia shift there too in order to add support to Bonansea. Meanwhile, Giugliano mark the opposition midfielder and the far-sided centre-midfielder also move centrally to cover the nearby midfielder. 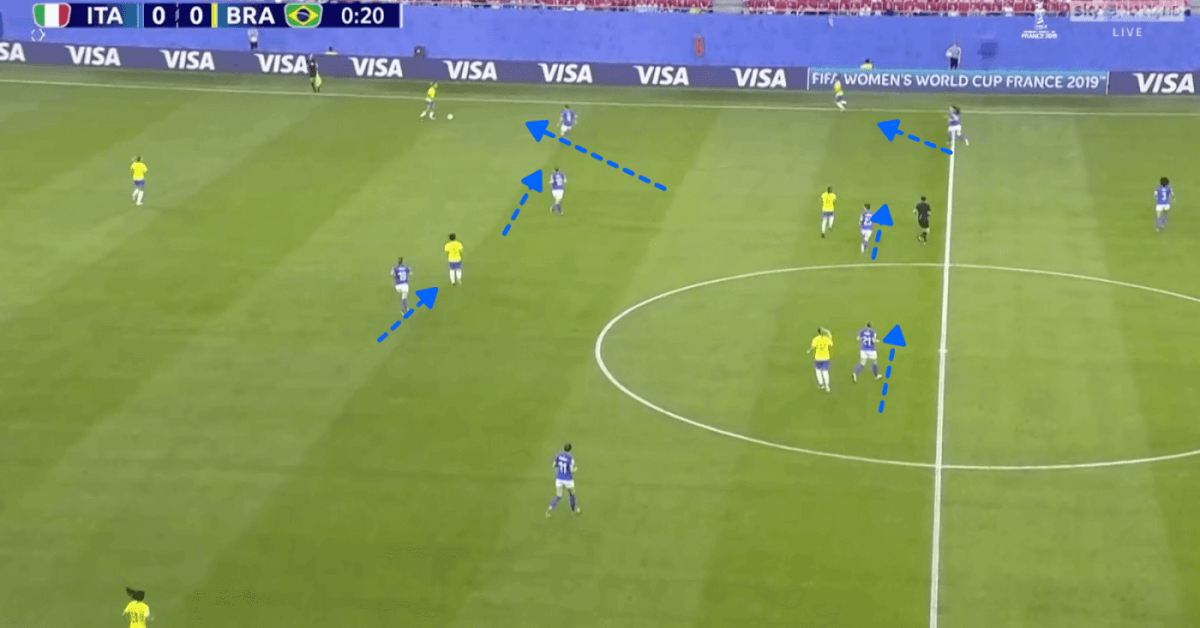 With this setup, Italy were able to disrupt Brazil’s build-up, however, Brazil did not build out from the back too often.

In their own half, Italy used the second-line shifting movement again. They were able to close down the wings quite well, as the images highlight below.

The ball-near midfielder pushed out to press the ball carrier thus the full-back could stay on the opposition winger. Giugliano and the far-sided central midfielder also shift there to add cover. Whilst the winger, Giacinti used backwards press towards the opposition midfielder who drop to the wing to offer passing option. Therefore, Brazil struggled to break Azzurre’s defence. 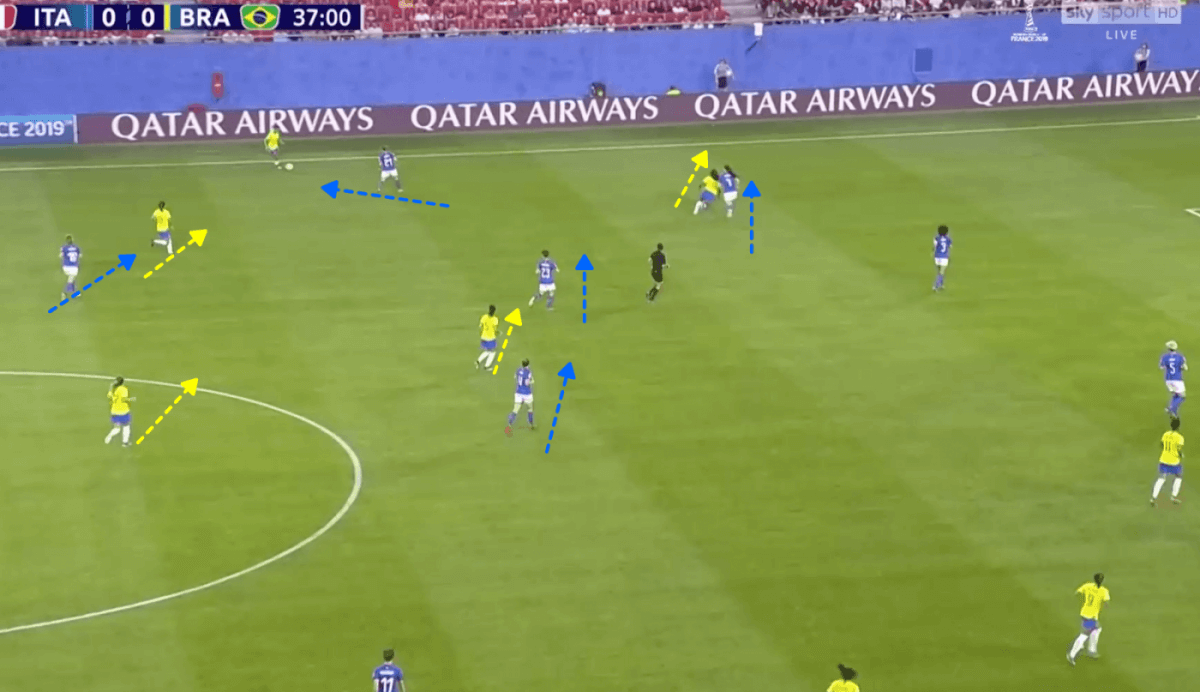 Brazil emphasising on crosses and corners

On the other hand, Brazil used wing-oriented play during their attacks. They often attacked the space behind the opposition full-back. Or they tried to get behind the defence through wing, but both ways aimed to create crossing opportunities to utilised the attackers in the box.

Around the 15th minutes, Brazil were able to keep the ball in Italy’s final third and created several corners in this period and in the whole game. The strategy in these situations was mostly the same. They participated with five players: one in the middle, inside the six-yard box, who attacks the near side. Then two players outside of the six-yard box and attacked the near side too while two players targeted the far side. 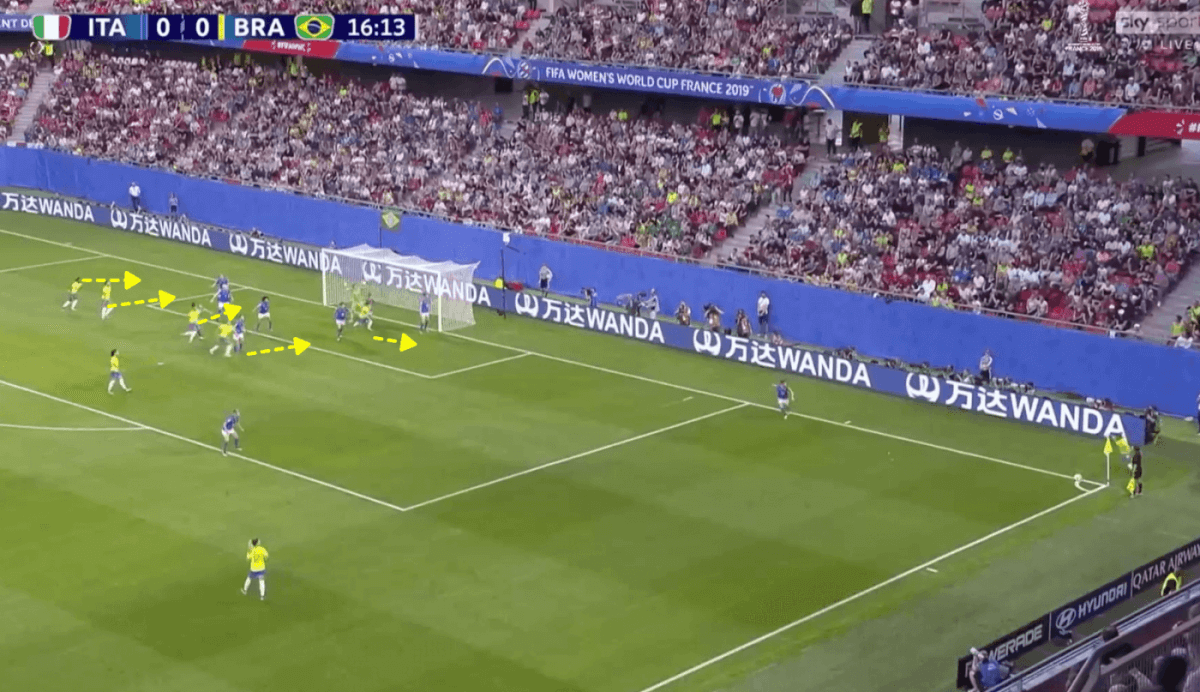 As opposed to the first half, Italy were more active in attack thus they recorded a higher possession rate in the second 45 minutes. As usual, Azzurre tried to build out from the back. Therefore, Brazil relied more on counter-attacks, although they still mostly posed threats from set-pieces.

Having said that, Brazil goal occurred from a penalty after they were able to bypass Italy’s pressing and progress up on the pitch. Actually, Brazil showed two ways to outplay Azzurre’s pressing scheme.

It was evident against Australia too, but only when Italy formed a 4-4-2-ish shape. If the opponent midfielder drops deep during the build-up, the Italian marker would not follow her thus she able to receive the ball in a free position.

And the second one was where Brazil utilised the momentum of the shifting movement. Playing the ball to one side to another, it allows the full-back to receive the ball and make the choice to where to play the ball before the opponent player arrives there to press.

Turned out this was highly effective since the Brazilian attackers stayed up front and created a numerically equal situation against the Italian four defenders. Which allowed to outplay it with a quick one-two and progress to the final third, into a dangerous situation.

Italy were able to limit the opponent’s options thus they never be in real danger, although failed to score in many attempts. Despite the loss, they made it to the round of 16 in the knockout phase. Whilst Brazil could not pose too much danger and mostly from set-pieces or corners. The goal occurred too late thus in spite of the win, they got eliminated early from the FIFA Women’s World Cup 2019.