The Serie A was back in action with Juventus hosting Verona at the Allianz stadium.  Both teams had had an inconsistent start to their campaigns – both had won just two games out of their opening four fixtures. It was therefore imperative for both the teams to get their seasons back on track after the international break. More so for Juventus, who are chasing Serie A glory again, but are already being leaders Milan. However, the game wouldn’t add much to the matches won column for either team, as the game finished a 1-1 draw.

For Verona, the draw would count as a good result as picking up points at the Allianz Stadium has been difficult to come by for most teams. For Juventus, they must only wonder how far they can get if they are to keep dropping points like this. This tactical analysis brings to light the tactics and plays that both the teams applied in the game. The analysis aims to highlight some of the events that unfolded in the game, which led to the scoreline.

Andrea Pirlo set his Juventus team up in 4-4-2 tactics. Wojciech Szczęsny started in goal with a back three of Merih Demiral, Leonardo Bonucci and Danilo. The midfield five consisted of Juan Cuadrado, Aaron Ramsey, Arthur Melo, Adrien Rabiot and Federico Bernardeschi. Paulo Dybala and Alvaro Morata played in the attack.

Ivan Jurić set his Verona team up in 3-4-3 tactics, for the visit to the Allianz Stadium. Marco Silvestri started in goal with a back three of Federico Ceccherini, Matteo Lovato and Alan Empereur. The midfield four consisted of Davide Faraoni, Ronaldo Vieira, Adrien Tameze and Darko Lazović. Ebrima Colley, Nikola Kalinić and Mattia Zaccagni played as the front three in attack. 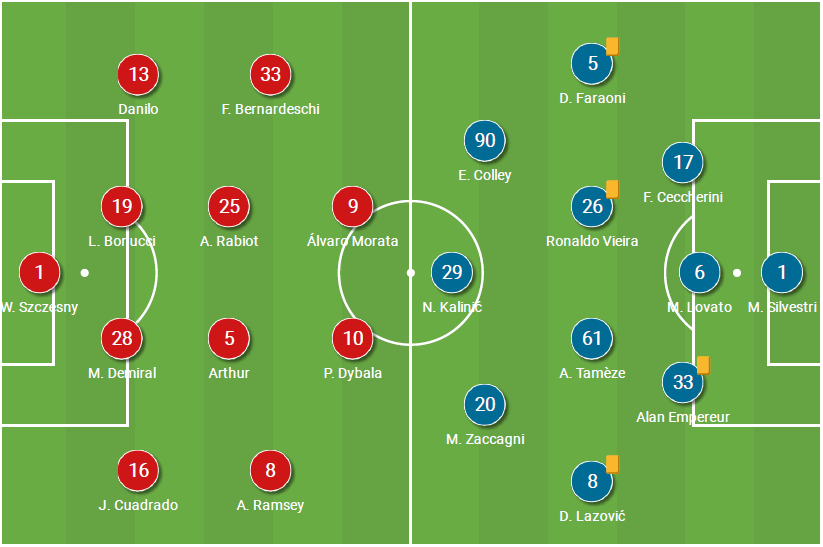 Juventus: Off the ball

Juventus, in the course of the game, deployed both tactics – a high press to win the ball back, and also held defensive shape to break down opposition play. In this section of the tactical analysis, we look at instances where Juventus held shape. The analysis looks at instances of Juventus’ defensive shape, how they transitioned (or didn’t) in shape, and whether or not the tactics paid dividends. It is important to note before the analysis that Juventus played with 4-4-2 tactics.

The first instance for the analysis is to highlight the defensive shape Juventus adopted when they’re off the ball.

The above images show Juventus’ shape when they’re out of possession. It is interesting to note how Juventus do not shift their shape and stick to a 4-4-2 when they’re both in and out of possession. While the rigid shape took away from their pressing intensity, allowing Verona time and space on the ball; it did bring in them an advantage in terms of cutting down space for Verona’s midfield. This blockage of space in the middle forced Verona to play the ball wide. Below are images from the game, to support the analysis.

Verona: Off the ball

The first instance for the analysis is to highlight the defensive shape Verona adopted when they’re off the ball.

It is interesting to note that Verona transition from their default 3-4-3 tactics when in possession, to a 4 man/ 5 man defense depending upon the third the ball is in. This is in stark contrast to Pirlo’s rigid shape, which took away Juventus’ ability to press with intensity. The transition feature of Verona’s tactics lets them press effectively, and shift shape defensively to deal with attacking threats. The only possible con to this – what if Juventus break the lines before Verona complete the transition? However, for this analysis, we focus solely on how this ability to shift defensive shape was effective for Verona to nullify Juventus’ attacks.

By transitioning from a 3-4-3 to a 5-3-2 when they’re out of possession, Verona were able to kill the space in the final third and choke the Juve attack. Almost like a tit for tat – what Juventus do to Verona in the midfield, is what Verona do to them in the final third. Below are some images from the game to support the analysis. Below are images from the game to support the analysis, where we see that Verona’s back five have choked Juventus’ attack for space.

Now that we’ve looked at how both teams played in terms of shape when they were off the ball let us look how they fared in the press. This section of the tactical analysis takes a look at how both of the goals conceded/scored coincided with the fall/rise in press of the respective teams. The analysis shows that Juventus had a game average PPDA of 9.2 while Verona had a PPDA of 9.9. PPDA stands for passes allowed per defensive action; it means that Juventus allowed 9.2 passes to be played before they took a defensive action, while Verona allowed 9.9 passes before taking a defensive action. To set the context to those numbers, the league average for season 2019/20 was 10.92. While this tells us there wasn’t much difference in their pressing intensities, it cannot be a mere coincidence that both of the goals came when pressing intensities were on a downward curve. Below is a chart displaying the PPDA for both teams during different intervals of time.

Another interesting observation from the analysis is the difference in the pressing tactics adopted by both teams. While Verona prefer pressing one-one, Juventus prefer pressing two-one or three-one. With Verona, the press doesn’t break the line and allows them to transition in shape, thereby staying true to their tactics. While in the case of Juventus’ press, the press is more coordinated and therefore demands a more disciplined and rigid shape. Below are some images from the game to support the analysis.

The tactical analysis covers some of the key events in the game, which led to the 1-1 result. Both teams were well matched for the most part of the game, with Verona arguably taking the plaudits for the first hour. The analysis also brought out how both teams set up when they were out of possession – while Juventus were methodical and rigid in shape, Verona were more fluid. It also brings to light how the pressing intensities on display were largely matched, but how varied the styles of press were – Juventus were coordinated and multiple-one, while Verona were combative one-one. However, one would argue that Juventus should have won this game owing to the quality of their squad and the fact that they are experienced Serie A winners, as opposed to Verona who were again promoted to the Serie A only last season. Juventus’ record against Verona in their previous three meetings now stands at 1W – 1D – 1L.

Both teams would have been looking to win this game, after winning only two in their campaigns so far. However, the draw does little to better their wins record this season. For Juventus, they must wonder how they can get back to winning ways under Pirlo. For Verona, this draw would be a result they would be content with. It could be said that Verona drew the game and won, while Juventus drew the game and lost.

Football analyst based in Hyderabad, India.
A firm believer of - "Attack wins you games, defence wins you championships."