Sassuolo have always been a “banana skin” team for Inter. Last season, Sassuolo kept clean sheets in both matches against Luciano Spalletti’s side, beating them once and the other match ending in a goalless draw. Now under new head coach Antonio Conte, Inter have made a very strong start to the season, keeping a perfect record barring a narrow loss in a top of the table clash against Maurizio Sarri’s Juventus. Both Sassuolo and Inter had lost their previous two matches in all competitions and were looking to get back on track with a strong performance in this match at the Mapei Stadium – Città del Tricolore.

In this tactical analysis, I’ll take a look at the tactics Antonio Conte used to beat Roberto De Zerbi’s Sassuolo. 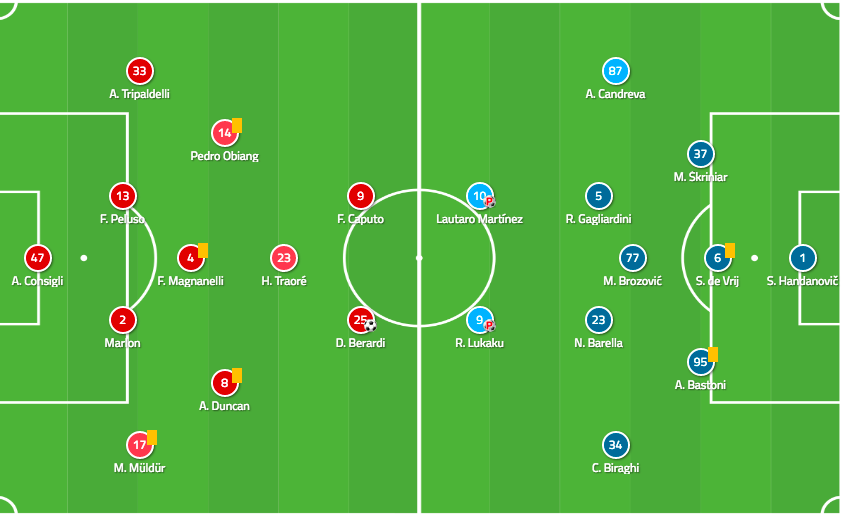 Sassuolo have been oscillating between a 4-4-2 diamond shape and a 4-3-3. In this match Roberto De Zerbi decided to play a hybrid of the two, using Traoré as a sort of “nine and a half” throughout the match.

Andrea Consigli started in goal. The young Alessandro Tripaldell and Mert Müldür started at left and right full-back respectively, either side of Marlon and veteran Federico Peluso. Francesco Magnanelli started at the base of midfield, flanked by Pedro Obiang and Alfred Duncan as the wide central midfielders. Hamed Junior Traoré played just behind Francesco Caputo and Domenico Berardi.

Inter played in the 3-5-2 that they have played in every league match this season under Antonio Conte. Samir Handonovič started between the sticks, protected by a back three consisting of Alessandro Bastoni, Stefan De Vrij, and Milan Škriniar. Marcelo Brozović started just behind Nicolo Barella and Roberto Gagliardini. Cristiano Biraghi and Antonio Candreva played wide of the midfield. Romelu Lukaku and Lautaro Martínez played up top.

Sassuolo pressed Inter in a hybrid shape of a 4-3-3 and a 4-4-2 diamond as mentioned earlier, with Traoré stepping out from his role in attacking midfield to press as a striker during certain phases which I will detail below.

In the below images, you can see Sassuolo’s pressing shape which was a 4-3-3 when Traoré stepped into the centre forward role. When the ball was in a central position, Traoré would strictly man-mark Brozović. The winger on the near side would prevent the pass to the wing-back – leaving the main option to the wide centre-back.

The pressing trigger was once the ball was played wide, this launched the winger on that side to press, while still maintaining a cover shadow on the wing-back on that side. Traoré would also press, while also ensuring a pass was prevented into Brozović. The Croatian was effectively stifled by Sassuolo, registering only 60 touches of the ball in comparison to 83 against table-toppers Juventus.

When Traoré’s press jeopardised Sassuolo’s priority on man-marking Brozović, Magnanelii would step out to man-mark him.

When building up, Sassuolo would keep a positional balance (players in each wing, half-space, and in the centre), as shown in the image below.

They’d have a player draw in the press (usually Consigli to entice the Inter forwards) before releasing the ball out wide where space has been created. This would draw in the Inter wing-back, where the wide central midfielder for Sassuolo would come to the wing and this helped Sassuolo play out from this press, using the third man principle which is about utilising the wide midfield alongside the full-back and wide moving striker on that side.

In the above examples, Consigli plays the ball out wide to Tripaldelli, Obiang moves wide, receives the ball and then plays it back to Tripaldelli, into Caputo and back to Obiang who runs into the space behind.

Once Sassuolo scored their second goal, Inter fell into a very deep and narrow 3-5-2 low block, looking to limit Sassuolo’s space. The block was so narrow that the difference between Inter’s midfield and defensive lines became almost indistinguishable.

As seen in the above image, Sassuolo’s solution to bypass Inter’s defensive shape was to play wide. The full-backs on both sides would overlap and try to create 2 v 1s with the winger or outside central midfielder on the wing-back.

With both strikers withdrawn and replaced by wingers, Inter committed to “parking the bus” and used these wingers to try and force Sassuolo central, where Inter could defend in numbers. This approach somewhat backfired as both of Sassuolo’s second-half goals came through the centre.

As we saw in this analysis, Sassuolo almost had a late fightback after going 4-1 down – courtesy of a brace each from Martínez and Lukaku. Substitutes Djuričić and Boga both scored leaving Inter with their hearts in their mouths for the last ten minutes or so. Both teams will take positives from this match, but Antonio Conte will see many issues – especially from a defensive point of view – the Inter coach could be heard loudly screaming at his team throughout the match, but couldn’t continue to express his disdain near the end of the match since he had lost his voice – very characteristic of Conte.

Sassuolo will start to worry and look over their shoulders after their third straight league defeat. Defensively, Sassuolo look very suspect (as usual) but they’ll be happy to have scored three against the best defensive side in the league up until that match – Inter had only conceded four goals before facing I Neroverdi.

Inter Milan face Borussia Dortmund next in the UEFA Champions League in a must-win match if Inter want to qualify from their tough group that includes La Liga champions Barcelona. Inter host Parma in their next Serie A match which, on paper, they should continue their great start to the season with a win.

Sassuolo travel to Hellas Verona next time out, with De Zerbi’s men wanting to pick up a win for the first time this month after pointless October so far.