There could not have been a greater contrast in form between the two sides playing on Sky Sports’ Super Sunday – Manchester United had a paltry 17 points from their previous 17 league games, while Liverpool came into this game on the back of a 17-game winning run in the league, looking to equal Manchester City’s Premier League record by winning at Old Trafford. A 15-point gap between Liverpool and United meant that while the Reds were looking to consolidate their position at the top of the table, United needed the win just to move into the top half. Ole Gunnar Solskjær had come under pressure following the defeat to Newcastle United in United’s previous league game, and it looked as if there would never be a better chance for Jürgen Klopp to end his winless run in the league at Old Trafford.

This tactical analysis piece will look at the tactics employed by both sides, and this analysis will aim to identify just how Manchester United were able to keep Liverpool at bay and almost come away with a win.

Solskjær named a back three for this game, with Marcos Rojo coming into the starting XI after Axel Tuanzebe was injured in the pre-match warm-up. Aaron Wan-Bissaka returned from illness to play at right-back, while Paul Pogba’s continuing injury problems meant that Fred partnered Scott McTominay in midfield. In attack, Andreas Pereira played as a ‘false nine’, with Marcus Rashford and Daniel James as the wide attackers.

Klopp went with what seems to be his first-choice XI at the moment, save for one change – Mohamed Salah’s injury allowed Divock Origi to come into the side, with Sadio Mané switching over to the right flank to accommodate this change.

United came out with a plan – to not allow Liverpool’s full-backs space and time to cross the ball. It is well known that most of Liverpool’s attacking thrust comes from their full-backs, who take up positions high and wide on the pitch, while their wingers move infield to overload central areas. However, United’s formation did not allow the Reds to do this. The back three meant that United were always matching the Liverpool attackers numerically, while their wing-backs moved wide to engage the Liverpool full-backs –

This meant that Liverpool were rarely able to get in behind the United defensive line, as the home side matched them numerically across the pitch. The two United midfielders, Fred and McTominay, sat deep to protect the zone in front of their centre-backs, while picking up Liverpool’s wingers if they moved infield, to allow the wing-backs to move wide and defend against the Liverpool full-backs.

This theme was repeated throughout the half – Liverpool failed to get any impetus down the flanks, while Firmino was also a lot more subdued than usual as United always had a player in his zone; either a centre-back stepping out or one of the midfielders dropping in to make sure that he did not get time on the ball in front of the United defensive line. It was a superb defensive performance from the Red Devils, especially in the first half, and Liverpool were made to look toothless due to these tactics.

This tactical setup also allowed United to hurt Liverpool in the space left behind their marauding full-backs. Upon regaining possession, United would immediately look to play direct passes in behind the Liverpool defence, with James and Rashford making runs into the channels to drag Virgil van Dijk and Joël Matip out of position. Andreas Pereira was crucial in this regard – he played as a ‘false nine’, drawing the centre-backs towards him which would open up space for James and Rashford to make runs into.

This occurred multiple times in the first half, where Liverpool’s centre-backs were isolated against the United attackers, or clever movement by the United front three opened up space in dangerous areas –

As mentioned previously, Pereira played a big role in these attacks. His positioning and movement inevitably attracted a Liverpool centre-back towards him, usually van Dijk, opening up space for his fellow attackers. Additionally, Rashford and James also made intelligent runs in the channels, creating space centrally for Pereira to exploit.

Pereira had a very good first half, especially off the ball with his movement and positioning. United could have been two or maybe even three goals up at half-time if the Brazilian had made better decisions when in possession.

Nevertheless, United’s goal was also down to these tactics. Robertson was caught upfield when United regained the ball, creating a 2v2 with Rashford scoring from James’ cross –

United’s tactics worked almost perfectly in the first half, and they should have probably done better with the half-chances that came their way due to this. As it would turn out, Klopp would make a tactical switch which would end up giving Liverpool a share of the spoils.

Klopp changed Liverpool’s system in the second half, moving to a 4-2-3-1 from the 4-3-3 which they had started out with –

As can be seen from the graphic, he moved Jordan Henderson to a wide-right role, with Fabinho and Wijnaldum anchoring midfield. 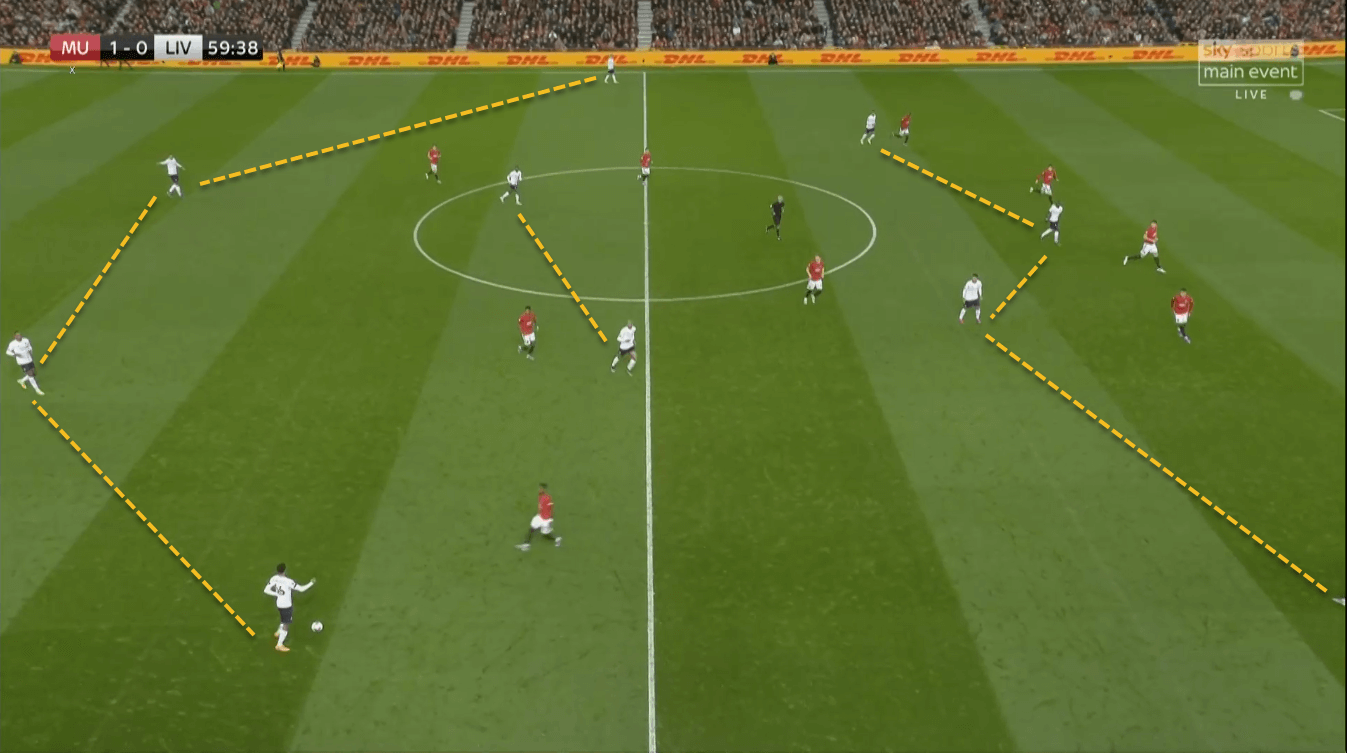 What this did was allow the Liverpool full-backs to have space and time on the ball. Young and Wan-Bissaka now had a wide man to take care of, and thus they could not get out to Alexander-Arnold and Robertson as quickly as in the first half –

Solskjær did attempt to counter this by moving to a 5-4-1, with Pereira and James going wide to pick up the Liverpool full-backs. However, Oxlade-Chamberlain especially came into central areas, forcing Pereira to go with him and creating space for Robertson 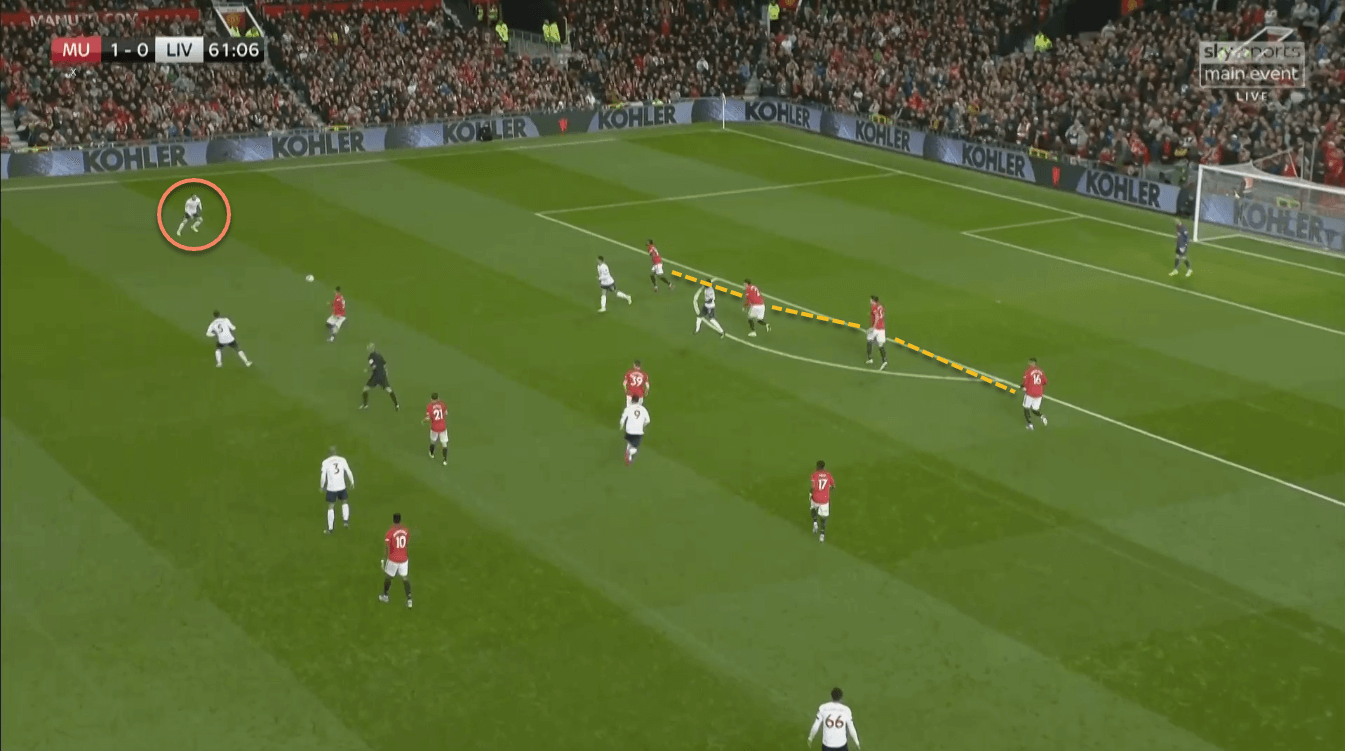 The Liverpool equalizer came from a Robertson cross, where the United wing-backs were centrally positioned due to Liverpool’s attackers –

Liverpool’s change in formation worked out at the end, and they could have probably got all three points had their equalizer come a little earlier.

This was a fascinating tactical battle between the two biggest sides in England. Manchester United were disciplined, energetic and had a plan, which is more than can be said for their recent displays. Liverpool, on the other hand, were lethargic and slow in the first half, falling prey to United’s tactics, but Klopp’s half-time change served as a catalyst and kept them undefeated in the league. With Solskjær hinting that United may continue with this system, it will be interesting to watch if this can help spark United and move them up on the Premier League table.