Due to the recent dip in form of the Bundesliga favourites, Schalke were offered the opportunity to become the league leader with a win over Hoffenheim. Their opponent, on the other hand, struggled under new head-coach Alfred Schreuder at the beginning of the season.

In the end, Hoffenheim could beat Schalke in a game between two teams with similar approaches with 2-0. Both sides opted at pressing the opposition in a man-oriented way and committing many players into central areas of the pitch. As a consequence, the game did not offer many chances. And despite Schalke dominating the first half of the game, Hoffenheim were capable of winning the game with different defensive tactics in the second half.

The following tactical analysis examines why Schalke could not utilise their domination in the first half and how Hoffenheim were capable of beating Wagner’s side in the end.

Schalke coach David Wagner decided to line his side up in a 4-3-1-2 formation. While Omar Mascarell played as the anchor in front of the backline, Alessandro Schöpf and Daniel Caligiuri were supposed to support the attack and press in wide areas. Playmaker Amine Harit was given freedom during the attacking phase and took over a fluid role in midfield. Upfront, Rabbi Matondo replaced Mark Uth on the striker position next to Guido Burgstaller.

Schreuder, on the other hand, continued with the recent trend to play with a back four whereas he mostly used a back three formation in the beginning of the season. To start into the game, the Dutch coach set his side up in a 4-3-3. Especially the right side of Hoffenheim seemed very defensive with usual centre-back Stefan Posch in the right-back position while usual full-back Pavel Kadeřábek played as a right-winger. Andrej Kramaric came back into the starting lineup after an injury. The Croatian’s task revolved around dropping into midfield occasionally and utilising his playmaking abilities to help his side to progress up the pitch.

Both sides reached quite low PPDA values of 6.79 (Hoffenheim) and 6.3 (Schalke). That means that either team allowed the opposition far less passes per defensive action than the Bundesliga average of 10.55.

And not only the stats but also the structure of the pressing systems of both teams was quite similar. Schalke, as well as Hoffenheim, opted to disrupt the opposition build-up play early in a man-oriented way.

In order to press Schalke in a man-oriented way, Hoffenheim’s central attacker prevented the opposition single pivot to receive the ball in midfield. The other three central midfield marked Schalke’s advanced midfielders and playmaker Amine Harit. The situation above shows how Hoffenheim situationally created a diamond while pressing to mark all of Schalke’s midfielders.

One of the only differences was that Schalke often committed one more player forward during goal-kick scenarios.

But that was a logical consequence of Hoffenheim’s attempts to play out with short passes. Contrary to that, Schalke’s midfielders usually positioned themselves higher up the pitch in order to win second balls after hitting the ball long. Therefore, Hoffenheim often only needed to press with their front three to shut down Schalke’s centre-back pairing and single pivot Omar Mascarell. 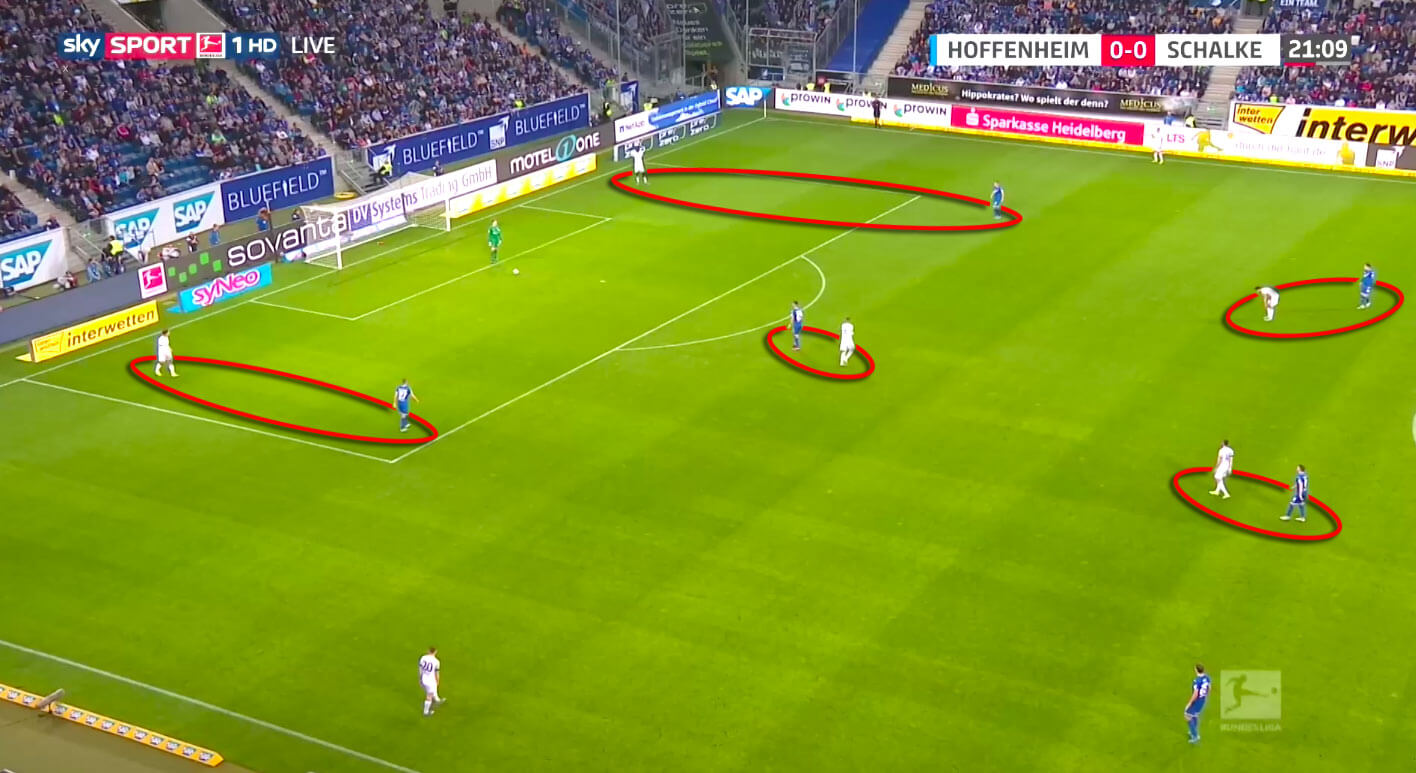 All in all, Hoffenheim attempted to play out with short passes more often than Schalke. As a consequence, they also lost possession in their own half at times.

But due to their structure to create short passing lanes, many Hoffenheim defenders were near the ball and could quickly get into their defensive position after a loss of the ball.

As mentioned before, Schalke dominated the first half which was mainly due to their successful high press. However, Wagner’s side could not take advantage of that and struggled to create goal-scoring opportunities.

Although Schalke’s formation was a 4-3-1-2, they rarely occupied the space between the opposition midfield and defence, a task that normally the number ten fulfils. Playmaker Amine Harit, however, often dropped into deeper areas to collect the ball during build-up.

On the one hand, he therewith supported pivot Mascarell who struggled to play progressive passes. On the other hand, Schalke, therefore, lacked a passing option behind Hoffenheim’s midfield because their advanced midfielders Schöpf and Caligiuri often stayed within the opposition midfield line.

Apart from the resulting lack of opportunities to play forward, Schalke’s strikers also struggled when receiving the ball. Often they would receive with their backs turned from the opposition goal. Without a passing option between the lines, they were often forced to keep the ball and wait for teammates to progress up the pitch.

Nevertheless, Hoffenheim’s central midfielders were often fast enough to defend Schalke’s attackers from both sides together with the defenders.

The lack of chances for Schalke was also a consequence of Hoffenheim’s well-structured defence. Especially when Schalke tried to create chances by putting in crosses, Hoffenheim’s defenders were well organised.

They stayed tight with Schalke’s attackers and could win most of the aerial duels due to the heading ability of the centre-back pairing and right-back Posch.

Another factor why Schalke’s crosses were not successful was that they often lacked players within the penalty area. With the ball near striker moving towards the ball near side, only the ball far striker was positioned in the box as a target player.

Because of Hoffenheim’s disciplined and well organised defence, Schalke could only threaten the opposition goal in set-piece situations or transition moments. When both of Hoffenheim’s full-backs supported the attack, the defensive cover consisted of the two central defenders and holding midfielder Kevin Vogt.

When Schalke’s advanced midfielders quickly progressed up the pitch in transition moments, they could support the attackers and create promising attacking scenarios. But due to a lack of accuracy in the final third, Schalke could not take advantage of these situations.

Hoffenheim struggled to play out from the back throughout the whole game. Despite a change of formations in the second half, Hoffenheim continued to play with the same build-up shape as in the first half whenever they had a goal-kick. Vogt still acted as a pivot in midfield during build-up while goalkeeper Oliver Baumann connected both central defenders.

The biggest problem was that Hoffenheim missed to occupy spaces between the lines and therefore failed to cleanly progress up the pitch with the ball.

From open play, Vogt played as the central defender of a back three in the second half. Therewith, Hoffenheim’s midfielders were outnumbered by Schalke’s midfield diamond. And since Hoffenheim rarely switched sides, they could not make use of the open space a midfield diamond offers on the ball far side.

Hoffenheim’s back five in the second half

Starting into the second half, Hoffenheim coach Schreuder decided to change the system of his team into a 5-3-2.

Moreover, Hoffenheim defended in a low-block and opted to utilise the open space after winning the ball. And Schalke were clearly challenged by Hoffenheim’s low-block in the second half.

Since single-pivot Mascarell preferred to drop into deeper positions and even form a back three at times, the numerical advantage of Schalke’s midfield was gone.

Hoffenheim were able to mark Schalke’s three remaining midfielders and prevent them from receiving in central areas.

In addition to that, the low-block of Hoffenheim was vertically compact and offered only very few spaces between the lines as shown below.

As a consequence, Schalke were forced to play out into wide areas where Hoffenheim’s wing-backs pressed Schalke’s full-backs. By shifting towards the wing, Hoffenheim could create numerical advantages near the ball. That way, they were able to keep Schalke away from their own goal.

One of the main factors why Hoffenheim won the game, in the end, was the substitution of Ihlas Bebou. With the dribbling abilities and the pace of Bebou, Hoffenheim possessed another attribute within their attacking department in the second half.

Bebou played 48 minutes and attempted 8 dribbles of which half of them were successful. Two of these successful dribbling situations introduced the goals scored by Hoffenheim. Therewith, attacker Bebou was the clear match-winner in a game that was, other than that, mainly characterized by the defensive solidity of either side.

As our analysis showed, Schalke’s pressing setup worked out well while they had issues to create chances against a well organised Hoffenheim defence. It would have not been a surprise if the game had ended in a goalless draw, but Hoffenheim’s counter-attacking threat enabled Schreuder’s side to gain three important points.

In order to stay within the higher regions of the Bundesliga standings, Schalke need to work on their positional attacks. Especially against defensive minded sides, Schalke struggle to create chances.

Hoffenheim, on the other hand, will be satisfied with the result but definitely have to improve their build-up patterns to take more advantage of their own possession phases in the future.