Alfred Schreuder took over Hoffenheim during this summer after Julian Nagelsmann left the club and joined RB Leipzig. Hoffenheim finished last season in the ninth position and so they won’t take part in any European competition this season. Considering this, Schreuder and his team can totally focus on the Bundesliga.

Nagelsmann took over the Kraichgauer in February 2016 and rescued them from relegation. In the following seasons, they were among the best teams of the Bundesliga and finished fourth, third and ninth respectively. So, Schreuder took over a team which already showed during the last three campaigns that they are a side with a lot of potential and quality.

This tactical analysis will show Schreuder’s career so far, conclude the tactics and the philosophy of his previous team where he was the head coach and use a pre-season friendly to examine how Hoffenheim might will play in this season.

After Schreuder ended his career as a player at Vitesse Arnheim in the winter break in 2008, he instantly became an assistant coach at the same club. However, he just stayed there until the summer break in 2009 and then moved to Twente Enschede where he was also the assistant coach until 2014.

He was also the caretaker manager in 2013 for four matches but he hadn’t gotten the license to be a coach of a team in the Eredivisie and so he became the assistant coach again until the end of the season.

After he earned his license, he became the new head coach of Twente in the summer of 2014 and stayed there for the 2014/15 season. His team finished in the 10th position in the Eredivisie.

The season 2014/15 was the only year until now in which Schreuder was the head coach of a team. Twente finished in the 10th position in the Eredivisie and reached the semi-finals of the Dutch club. There were some young talented players in the squad like Hakim Ziyech, Luc Castaignos and Jesús Corona. We will now discuss their tactics.

Schreuder usually lined his team up in a 4-4-2 with Castaignos and Ziyech upfront. Since Castaignos is a classic striker and his Moroccan teammate an offensive midfielder, Ziyech often dropped deeper to support the two central midfielders and so the formation turned into a 4-2-3-1.

Schreuder’s team mostly built up their game with short passes from the back. In some occasions, they also used long balls to find one of their two strikers. However, their general plan was to keep the distances short between the players to always create enough passing options for the player on the ball.

The two centre-backs and the two central midfielders organised the build-up while the full-backs pushed up. Besides, Ziyech often dropped deep to get involved in the build-up and get on the ball. Furthermore, the wingers often tucked in to create space for the full-backs. In the image below, all these aspects get visible. Ziyech is very deep while the centre-back is on the ball. Corona creates space due to his run into the centre and the left-back uses this.

Twente tried to solve almost every situation with short passes and passing combinations. To execute this, a team needs several players with a good technique and especially the ability to stay calm under pressure. Schreuder’s players had exactly these qualities and so they were able to solve situations like in the shot below with short passes.

As soon as they reached the final third, they tried to create goalscoring opportunities with the aid of crosses. The opposing winger or Ziyech joined Costaignos in the penalty box to have two people who could convert the cross.

His defensive concept at Twente

When the opponents were in possession, Twente dropped deep in their 4-4-2 formation and lured their opponents out to create space for counter-attacks. They usually put pressure on them, as soon as they crossed the half-way line and they always stayed in their 4-4-2 and 4-2-3-1 respectively. They tried to keep the distances between the players short and the space between the two banks of four small. Considering this, they only free space for their opponents were the wide areas.

In addition, as soon as the opponents got themselves into a good crossing position in the wide areas, both central midfielders joined the two centre-backs in their penalty box to create numerical superiority against the opponents. Since then nobody occupied the zone at the edge of the penalty box, Ziyech dropped a bit and the opposing winger shifted in.

However, Schreuder’s team also put pressure on the opponents in the right situations higher up the pitch. Whenever there was an inaccurate pass, a bad first touch or when the goalkeeper got on the ball, they pressed in at them high up the pitch. However, they always tried to stay in their formation, so they could quickly transform back in their usual set-up.

To examine how Schreuder’s new team might play this season, we’ll have a look at their pre-season friendly against Hellas Verona on the 25 July.

The Dutch coach set up his team in a 3-4-3 formation with Benjamin Hübner, Kevin Vogt and the Austrian Stefan Posch building the back-three. Florian Grillitsch and Dennis Geiger were the central midfielders while Steven Zuber and Pavel Kadeřábek played on the wings. Ihlas Bebou, Vincenzo Grifo and Christoph Baumgartner played upfront.

It is quite possible that Schreuder will stick with that system since Hoffenheim has got several good centre-backs in their squad and a huge number of players who can play on the wing either as a wing-back or as part of the front-three. Since it was a pre-season friendly and they had another game just after that against Trabzonspor, it is logical that exactly this team won’t be his first-eleven and he tried out some things.

However, it was obvious that Grifo and Baumgartner had the task to shift in when the Kraichgauer were in possession to create space for the wing-backs Zuber and Kadeřábek. Even though Hoffenheim didn’t focus that much on crosses as Twente under Schreuder did back then in the season 2014/15, the movement of the wingers was quite similar. The higher positioned player shifted into position in the half-spaces and the deeper positioned players pushed forward.

However, Schreuder’s team tried to build up the game from the back with short passes. Although Verona pressed in at them high up the pitch occasionally, they never panicked and kept ongoing. Especially the two central midfielders were important for that because they always tried to find spaces and create passing lanes.

Also, they tried to avoid long balls since the Italians would have had a clear advantage when it comes to aerial duels. The goalkeeper Oliver Baumann rarely played a long ball and always looked for a short passing option. 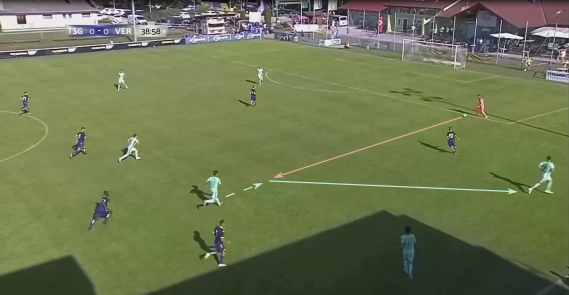 In addition, the players often switched positions and had a lot of freedom. For example, Bebou sometimes positioned on the wing even though he was the only real striker in the squad.

Zuber and Kadeřábek stayed very wide most of the time to provide width. Due to that, the distance between the players of Verona weren’t that short and so Hoffenheim got space in the centre to combine. So, the positioning of the wing-backs created space for the central midfielders and the wingers who shifted inside. In the image below, Bebou and Kadeřábek provide the width and so there’s a lot of space in the centre which Hoffenheim exploit.

When Verona were on the ball, Schreuder’s team attacked them extremely high and wasted no time to win back the ball. They used a very man-orientated high pressing. One player put pressure on the opponent on the ball while his teammates marked their nearest opponent.

Due to that, all short passing options were cut off by Hoffenheim’s players and so they forced Verona to uncontrolled long balls. These long balls were easy to defend for the back-three due to their ability to win aerial duels. In addition, they always had numerical superiority against Verona’s one or two strikers.

Of course, it’s not possible to execute such a high pressing for all 90 minutes. But even when they didn’t press in at them high up the pitch, they never really sat back deep and waited for Verona. They waited for them until they were 40 yards away from their own goal and then put slight pressure on them. Verona’s players were often unable to cope with these situations and once more played long balls which were easily defended by Hübner, Vogt and Posch.

As you can see in the image below, the front-three is positioned high but doesn’t really press in at their opponents. They just wait until the player on the ball passes to one of his wider positioned teammates and the put pressure on the receiver. In addition, the two central midfielders Grillitsch and Geiger also push forward. The two wing-backs stay deep to occupy the wings and support the back three. That’s why they’re not in the image.

As this analysis showed, we can look forward to watching Schreuder’s Hoffenheim this season in the Bundesliga. His time at Twente and the match against Verona showed that he wants his team to build up the game with short passes and passing combinations. That’s not surprising when you also consider that he was an assistant coach at Ajax for one and a half year.

Furthermore, it is quite imaginable that Hoffenheim will use such a high pressing as Twente used it on some occasions under Schreuder back then. It’s important for the Dutch coach that his team has got the ability to make a structured build-up from the back and doesn’t sit back and wait for the opponent to attack throughout the whole game.

How exactly his team creates goalscoring chances and with which formation he will go with demands on the players in his squad. At Twente, he had with Castaignos a striker who is great in converting crosses and so they focused on that. The game against Verona showed that Hoffenheim focuses more on attacks through the centre but we’ll have to wait for the remaining pre-season friendlies and the first competitive fixtures to understand their exact plan. However, you should keep an eye on Hoffenheim this season since they could spring a surprise in this year’s Bundesliga.