In the top of the table clash between Juventus and Napoli on Saturday night, Juve flexed all of their muscles as they came from behind to win 3-1 in Turin. Dries Mertens had opened the scoring but a brace from Mario Mandzukic turned the game around. Leonardo Bonucci then added a third to clinch it. This tactical analysis looks at the key trends of the game. The focus will be on Juventus approach to the game, especially in attack.

Juventus lined up in what many thought would be a 4-3-3. Wojciech Szczesny was in goal with a defense of Joao Cancelo, Bonucci, Giorgio Chiellini and Alex Sandro ahead of him. Miralem Pjanic anchored the midfield with Emre Can to his right and Blaise Matuidi to his left. The front three had Paulo Dybala and Cristiano Ronaldo either side of Mandzukic.

Napoli set up in a 4-4-2 which had David Ospina in goal. The back-four included Elseid Hysaj, Raul Albiol, Kalidou Koulibaly and Mario Rui. Allan and Marek Hamsik started in central midfield with Jose Callejon to the right and Piotr Zielinski on the left. Mertens was joined up front by Lorenzo Insigne.

Now let’s look at the tactics behind Juventus’ win. But let’s start with Napoli who started the game very positively.

Napoli started the game brightly and had the better of the first 15 minutes. They pressed well as a unit and moved the ball quickly. They also found the first goal of the game when Bonucci misplaced a pass as Juve tried to play out from the back under Napoli’s pressure. The pass was intercepted in midfield and Callejon then set up Mertens for a tap in.

Juve struggled to get out of Napoli’s press initially. The pressing-scheme was a mix of positional defending and man-orientated defending. The image below is one example of how it worked. The ball is with Juve’s left-back Alex Sandro. He is pressed by Callejon. Allan, as the ball-near central midfielder, steps up to mark Matuidi. The ball-far central midfield, Hamsik (yellow), provides cover for his teammate. We can also see how Mertens have dropped to get access to Pjanic. This type of press and cover is very basic but it worked really well at the beginning as Napoli constantly closed passing options for Juve’s back-four. 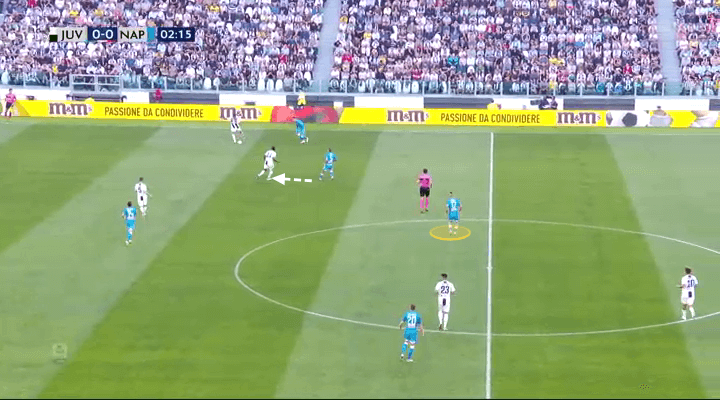 Napoli’s formation changed in possession. Callejon would remain wide on the right but Zielinski would constantly make inverted movements from the left. This caused Juventus a lot of problems early on. The best example is below where Zielinski has found space, gets the ball from Insigne and hits the post with a low strike. 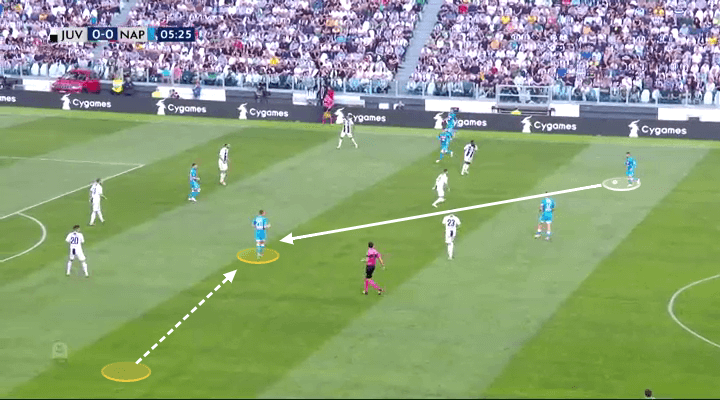 After the bright start and early lead, Juve improved and wrestled control back from the Azzurri.

Massimiliano Allegri has often decided to use a man-orientated pressing-scheme against Napoli and Saturday proved no different. The image below is a perfect example. Ronaldo starts the press against Ospina and uses his cover shadow to block the pass to Albiol. The rest of Juve’s attackers and midfielders position themselves with access to a direct opponent. It’s not visible below, but even the centre-backs Chiellini and Bonucci would mark their respective forwards and follow them into midfield when Juve pressed high. 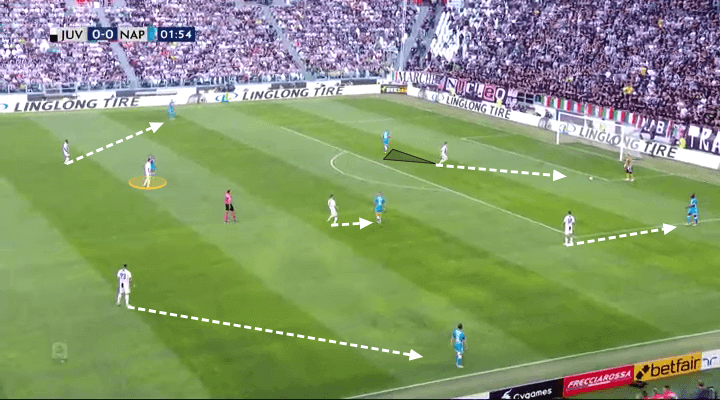 Another example below. Juve tried to press Napoli high and disrupt their build-up early. This worked really well, especially after about 15 minutes when Juventus started to dominate the game. 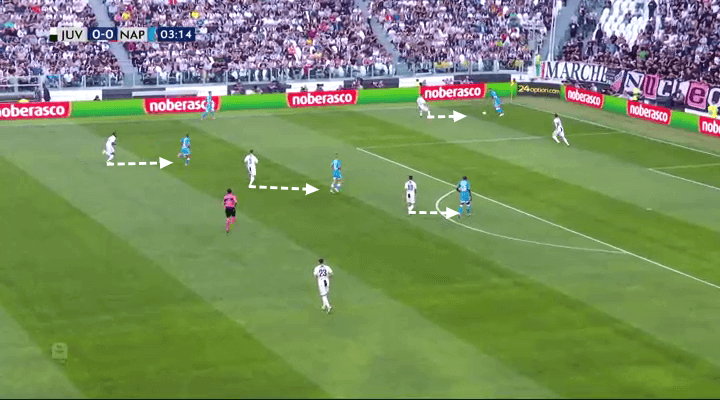 As they dropped deeper, Juventus settled into a defensive 4-3-3 shape with the front three quite narrow as you can see below. This gave them a great outlet when the ball was won with three central players to attack through. 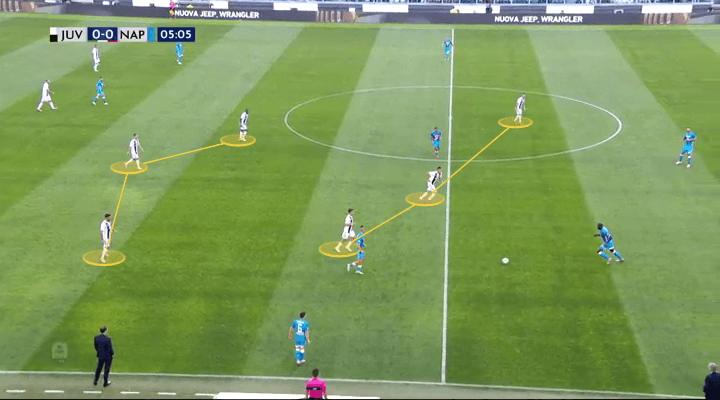 The man-orientated pressing made it difficult for Napoli to calmly build attacks and helped Juve regain possession quickly after it was lost. It’s in games like these that Napoli really miss Jorginho after his move to Chelsea. Neither Allan nor Hamsik is a playmaker in the same sense and it showed as neither were able to give Napoli the control they needed in midfield.

The main takeaway from the game was Juventus set up in attack. Allegri has always loved to use a 4-3-1-2 formation in the past, particularly at Cagliari and Milan, and he sort of did here. The formation on paper looked like a 4-3-3 with Dybala off the right and Ronaldo off the left. In truth, it became a 4-3-1-2 with Dybala as the number 10 behind Mandzukic and Ronaldo.

We can see this setup below. The midfield three keeps their positions but Dybala moves into a number 10 position to establish a midfield diamond in possession. This gave Juve a 4 vs 2 advantage in central midfield. 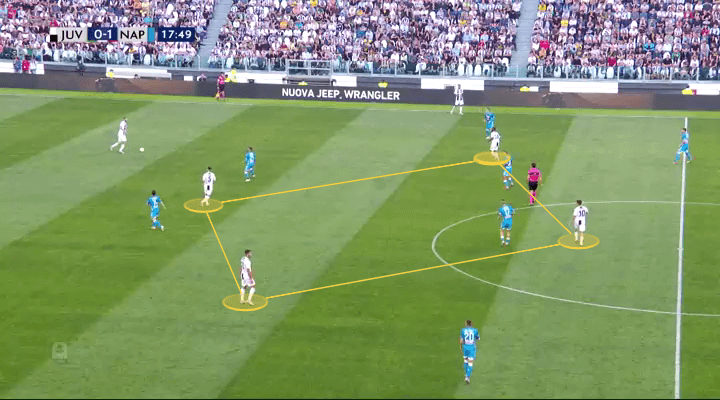 And the front three then positioned themselves as can be seen below. The flanks were left to the two attacking full-backs Cancelo and Alex Sandro who both always gave great attacking width. 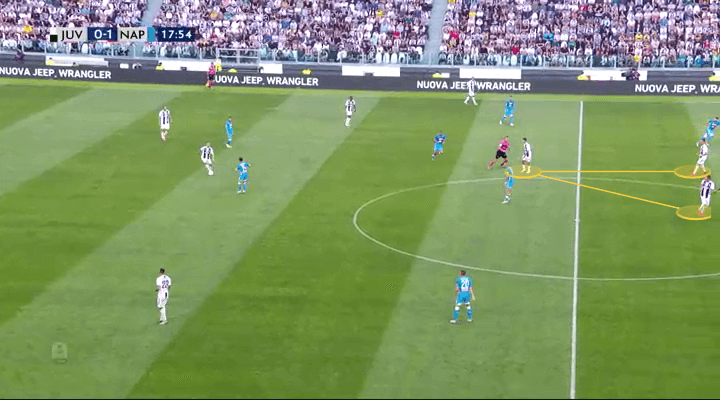 In their build-up, the full-backs often moved high early and this opened space in the deeper wide areas. Juventus often looked to drop the wider central midfielders into these spaces. Can did it repeatedly on the right and Matuidi did on the left too. This allowed Juve to double up against Napoli’s wingers and allowed for an easy progression of the ball. The dropping movements of Pjanic also helped Bonucci and Chiellini establish a 3 vs 2 against Napoli’s front-two and Juve started to play through Napoli more and more. An example of Matuidi’s movement is highlighted below. 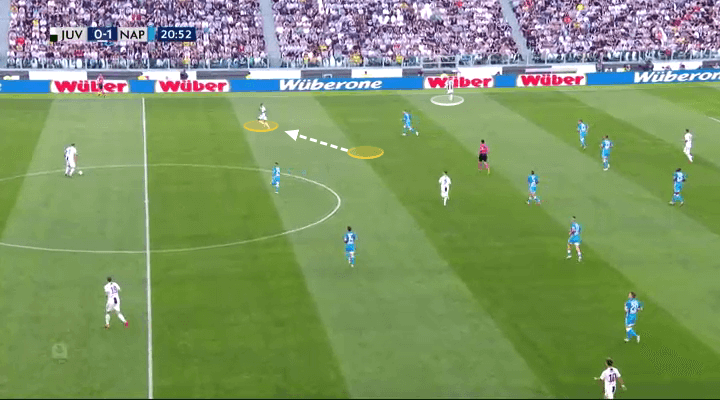 The image below provides a great example. Dybala (yellow) finds space behind Hamsik and between the Slovakian and Allan. It’s a simple pass for Can to make and Dybala can then turn and face Napoli’s defence from a great position. The issues for Napoli are clear to see. Hamsik is attracted to the ball while Allan is caught in trouble. Should he go to Dybala or block the pass to Pjanic. There’s also Matuidi to worry about behind him. This is a problem Napoli often had in midfield due to their players often getting confused and man-orientated instead of simply closing the spaces and keeping the midfield quartet more narrow and compact. 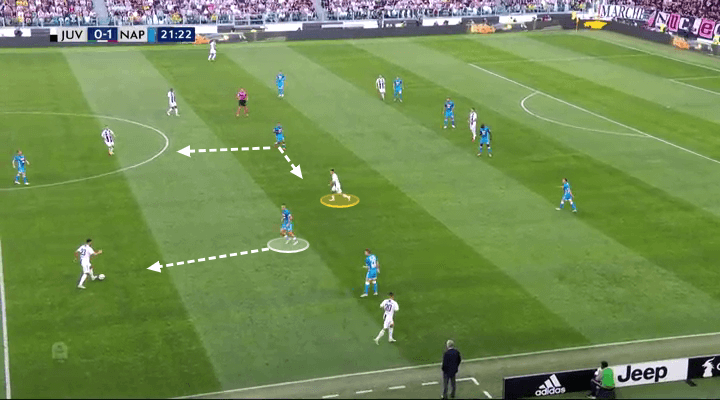 As the game went on Juve found ever more space and totally dominated the game. The 4-3-1-2 setup in attack was one of the keys to their impressive win.

After just seven games Juventus have already established a six-point lead at the top of Serie A. It remains to be seen if anyone can keep their pace. The win against Napoli was extremely impressive and it will now be interesting to see how this Juve can perform against the best clubs in Europe. This new setup was interesting and hopefully something we can see more of as it gave Juve a lovely balance and made them fun to watch. Napoli can take plenty of positives from the game but needs to start thinking about if Hamsik in such a defensive position really is the best option they have. Amadou Diawara, for one, is waiting in the wings to be given a proper run in the team. All in all, this top of the table clash was a great advert for Serie A football.