Teenage wonderkid Willem Geubbels wasted no time in declaring his intentions upon moving to AS Monaco from Lyon. At the press conference unveiling the €20m signing, Geubbels set his sights high comparing himself to Kylian Mbappe!

“It makes you want to do good things when you see what he did. I am not putting pressure on myself. I am very young too. It is easy to make the comparison. I can very well see myself following his footsteps and doing better.” – Willem Geubbels

Kylian Mbappe debuted for AS Monaco as a 16-year-old in the 2015-16 season. His debut season he played in 11 games and scored 1 goal. Mbappe’s second season for AS Monaco he played in 29 league games and scored 15 goals with 8 assists. Then a loan to Paris Saint-German in his third season brought tallies of 27 league games and 13 goals with 8 assists. At the ripe old age of 19, he starred in the World Cup for France scoring four goals including being the second youngest player to score in a World Cup final. The youngest to score in a World Cup final is Pele. His permanent move to Paris Saint-German was €180m.

In order to outdo Mbappe, Geubbels would need to be better than one of the most meteoric rises in football history. Going from 16-year-old debutante to 19-year-old World Cup start and 2nd highest transfer fee ever paid. Geubbels has set his sights astronomically high.

Geubbels is a tall fast player who physically looks the part despite his young age. He is 185cm tall and weighs in at 72kg. His strengths are his pace and dribbling ability. He is fearless at going at players on the dribble.

Here are a couple of looks at Geubbels as a wide attacking player where his sheer pace can be utilized.

In the picture below you can see Geubbels making a run down the left with the ball on the centre forward’s foot. 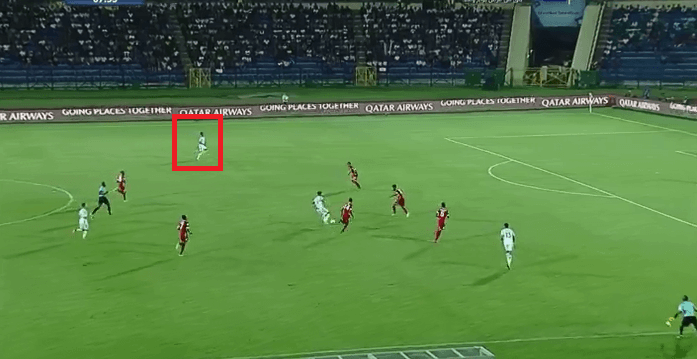 Geubbels shows his pace as the centre forward plays him in behind the backline. Note the distance Geubbels covers in order to get on the end of the through ball.

The result is a shot with Geubbels favoured right foot.

As shown in the above pictures, Geubbels has elite straightforward speed and great range on the wing. The amount of ground he covers is one of the reasons that he is a top prospect that invites crazy comparisons.

Here is an example from the right side attacking position. In this example, you can see his explosive quickness to separate from defences in a smaller space. 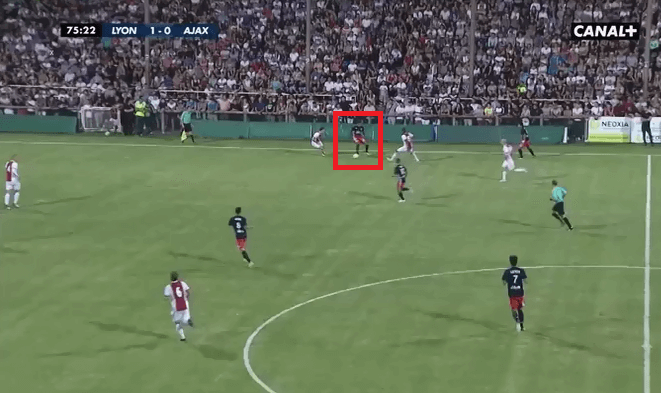 Geubbels is on the sideline setting up a one-two to free himself down the line. 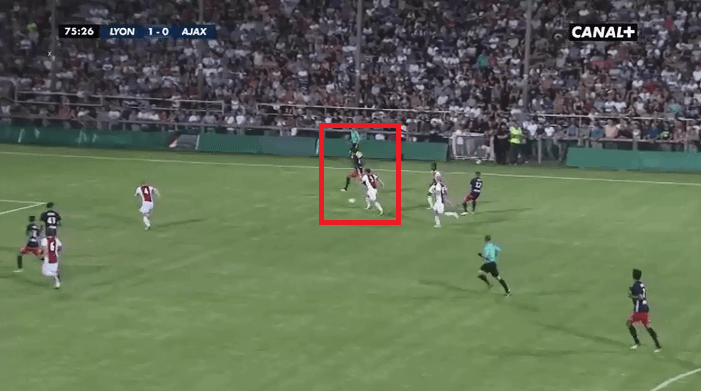 Following the pass, Geubbels explodes into space to receive the through ball. From the picture above you can see that Geubbels has attracted the attention of four defenders. A simple one-two on the sideline removes four defenders from the play. 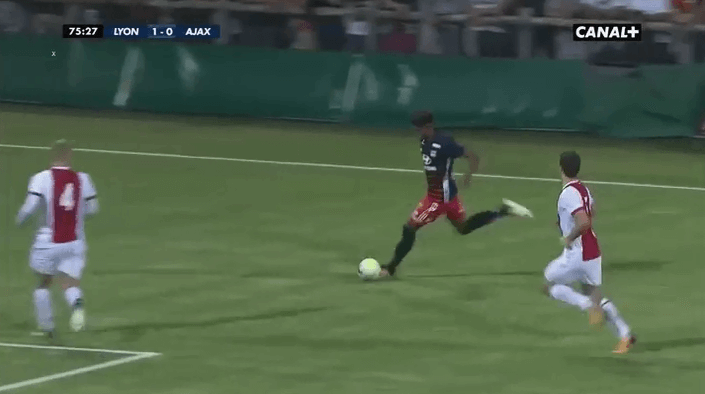 Geubbels runs onto the ball. The defender is pulled out of position leaving a forward open in space that Geubbels finds with a driven cross.

Besides using his athletic talents out wide Geubbels also has shown that he can play centrally working off the defender’s shoulder. 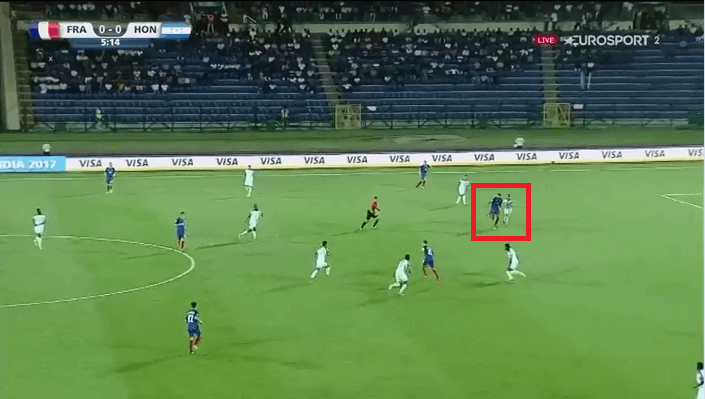 Here we see Geubbels working off the last defender setting up a run in behind. 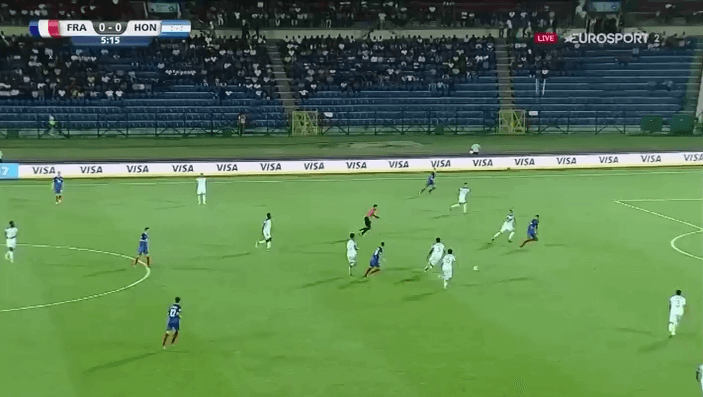 The midfielder releases the ball and Geubbels accelerates in behind the defence. 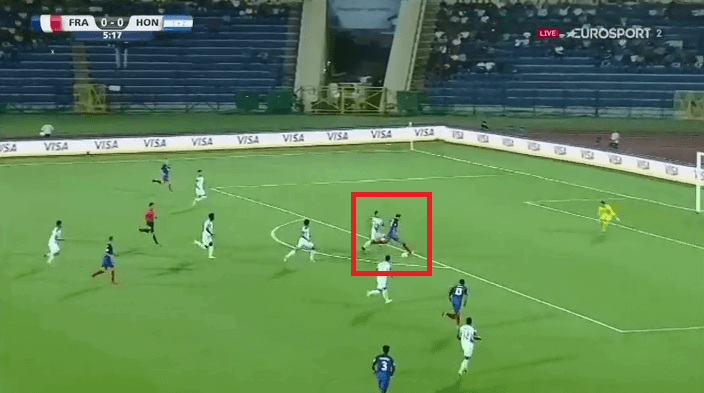 In behind, Geubbels finds himself in a great scoring opportunity.

Geubbels has the versatility and skill set to play centrally or in either wide position. On the right wing, he is able to get end line and find runners in the box. Shown below Geubbels finds the open player with a cut back pass from the end line. 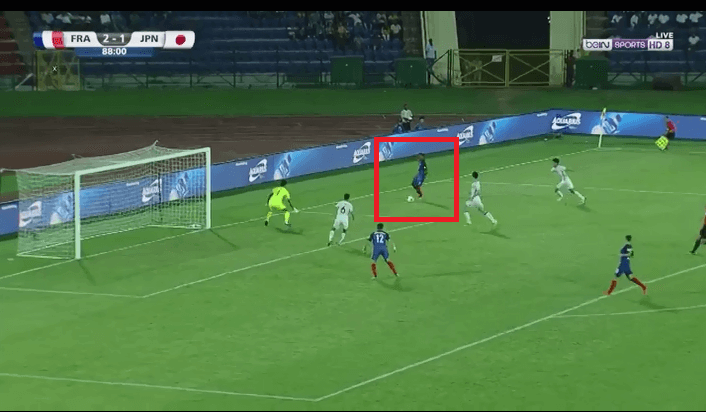 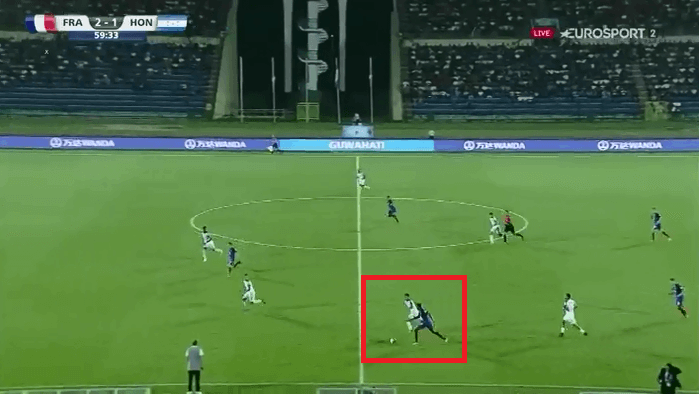 Geubbels goes past the defender driving into the middle of the field. 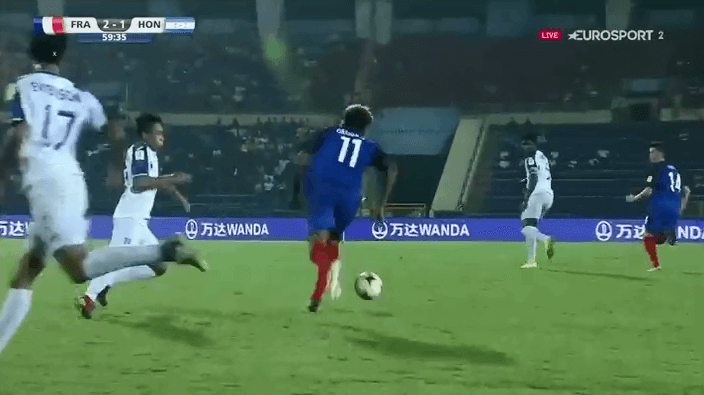 Geubbels dribbling brings the defence wildly out of shape. Here we see four defenders focused on Geubbels leaving an easy pass in behind for a teammate. In this example, Geubbels goes from the left sideline across three defenders faces and gets a great scoring opportunity for a teammate. 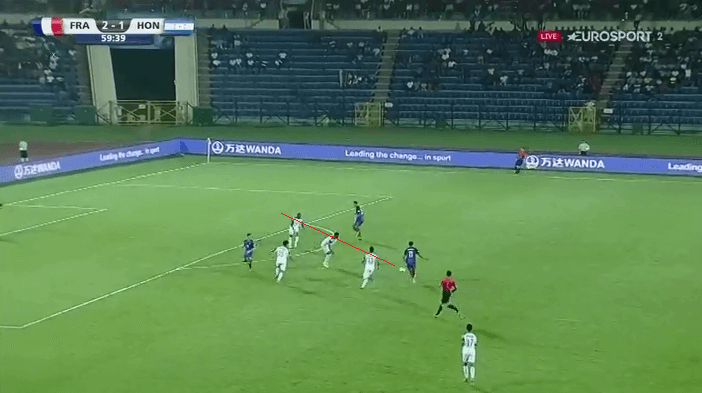 The crazy comparison to Mbappe is inevitable as Mbappe is the hottest name going, but from his play and his career path, I think a better comparison is to fellow Frenchman and Lyon to AS Monaco alum Anthony Martial.

Manchester United’s Anthony Martial is an obvious measuring stick for Geubbels. Martial was also sold from Lyon to AS Monaco. Martial’s transfer to AS Monaco was for a fee of €5m in 2013. Martial debuted for AS Monaco at the age of 17. His first season for AS Monaco brought 11 league appearances with 2 goals and 1 assist. The second season he totalled 35 league appearances with 9 goals and 3 assists. Martial was transferred to Manchester United in the 2015-16 season for reported €60m.  His debut season at Manchester United saw him score 11 goals in 31 league games. Another comparison with a meteoric rise.

Martial has an almost identical build and burst on the scene at AS Monaco as a powerful and skilful attacking player. This is a slightly tempered comparison that shows a path for AS Monaco and Geubbels

“People talk a lot about our philosophy (of being a selling club) and some congratulate us. It’s an acknowledgement and a motivation. With our constraints, we have to continue to work smart.” – Vadim Visilyev in L’Equipe

IF Geubbels is the next Martial or Mbappe the pathway is clear.

The expectations with the AS Monaco plan are for Willem Geubbels to get around 11 games with most of those as a substitute this season. Season two at AS Monaco would see more than 35 games with over half as a starter. Finally, a big move for big money as AS Monaco cash in on their investment.