Creativity is an attribute that is much sought after in football, especially in the modern game where the emphasis has long been put on technical ability and physicality at academy level. Teams at the top level covet a player who has the spark and ingenuity to do something different when in possession of the ball in tight areas, the ability to make the right decisions in the final third is incredibly important if you want to unlock the low block defences of the opposition. In James Maddison, Leicester City and England have a player who has the potential to provide that creative spark at the highest level for the next decade.

At 21 years of age and having signed for Leicester City at the start of the 2018/19 season Maddison is already on his fourth professional club. Having initially started his career with his hometown club Coventry City he moved in 2016 to Norwich City before enjoying loan spells first of all back at Coventry City and then with Aberdeen in the Scottish top flight. The 2017/18 season saw Maddison fully integrate into the Norwich City first team and his performances attracted covetous glances from sides in the English Premier League. In the end, Leicester City were the first team to firm up their interest and the young attacking midfielder signed for the Midlands club for a reported £22M.

There is something interesting happening at Leicester City under their French coach Claude Puel. The recruitment from Leicester has seen the club remodelled with a number of young players not only being signed but receiving first-team minutes. From the likes of Ben Chilwell at left back to Ricardo Pereira on the right and Demarai Gray on the wing and Kelechi Ihenacho in the attack, it is clear to see that Maddison has plenty of company in terms of youthful potential in the Leicester first team.

It is, however, worth isolating Maddison to examine what his strengths are and what he needs to work on going forward in order to reach his full potential.

James Maddison is very much a number 10 in the traditional sense in that he prefers to play high on the field where he can take advantages of space as his team transition into the attacking phase from the defensive phase. He uses his high position to shift into areas that will force the opposition defenders to make a clear choice in terms of whether to follow the attacker and leave a gap elsewhere or whether to allow Maddison to drift and occupy spaces that will pose a danger should he receive the ball.

In this Maddison is adept at playing between the lines of the opposition where he will play off the shoulder of the midfield unit of the opposition looking to provide passing angles as his teammates move to progress the ball forwards. This is the type of movement and positional intelligence that England were crying out for at the World Cup and whilst the likes of Dele Alli at Spurs operates in a similar manner the two players are completely different in the way that they play whilst in possession of the ball.

Alli is very much more of a threat arriving late in the penalty area when out of possession in order to provide a goal threat whilst Maddison is more of an old-school playmaker who will look to get on the ball in and around the final third before looking for space to striker at goal or looking for an opportunity to play a through ball behind the defensive line. 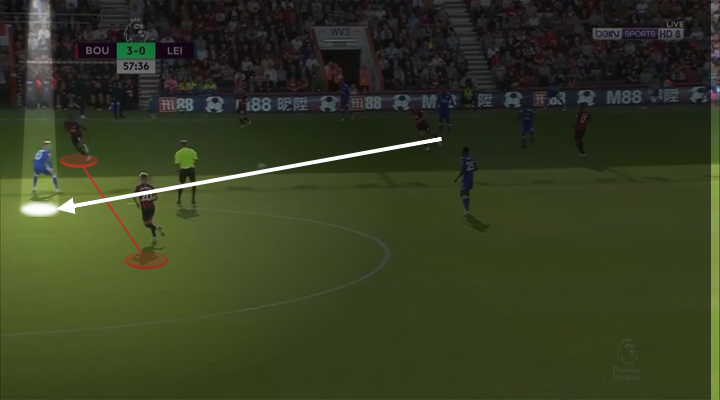 In the match against Bournemouth this season Maddison was constantly looking to drop into pockets of space, As you can see from the image above as the ball is won back by Leicester in their own half he is instantly looking to receive a pass that will split the two Bournemouth midfielders and allow him to turn on the ball to attack forwards towards the final third. Indeed the only other attacking midfielder in England that plays in the same manner as James Maddison is Phil Foden of Manchester City. 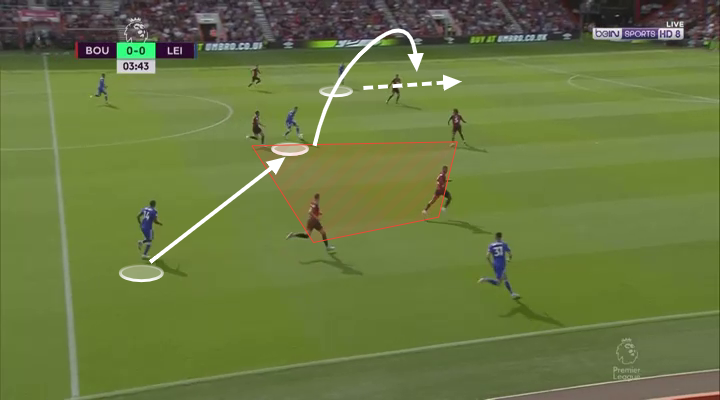 Again here we see Maddison in the same match against Bournemouth. As he collects possession of the ball he is already goal side of the chasing Bournemouth midfield and as he takes possession he has the quality to identify and exploit space out in the wide area with a quick ball over the top of the opposition defence.

When taking possession of the ball in these areas we see Maddison come to life with his ability and willingness to be at the centre of everything that his side will try to do going forward.

James Maddison is a key part in the attacking system of Leicester City with his capacity to collect the ball and link in with teammates around the final third of the field. So far this season in seven premier league seasons Maddison has played a total of 566 minutes registering two goals and three assists, in other words, he has been directly involved in a goal every 113 minutes in his Premier League career to date. If you take expected goals and expected assists from the excellent Understat website then they have Maddison down as 1.58xG and 1.28xA showing that he is outperforming his current output by 1.42 goals and 0.72 assists. While these figures will be expected to regress to the mean as the season progresses, for a young player in his first top-flight season however the statistics are extremely promising. 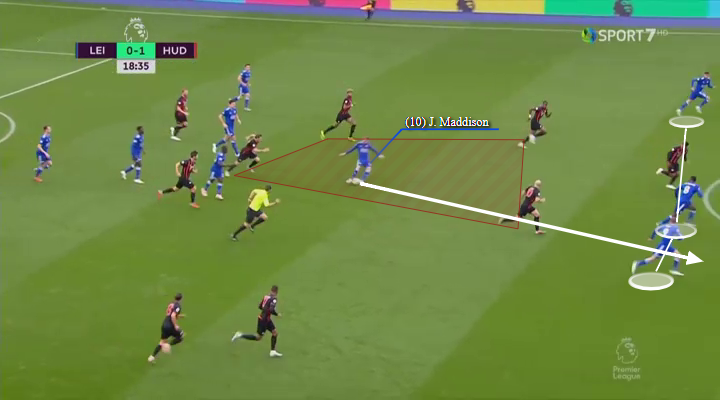 These are the areas in which Maddison excels for his side. Picking up the ball deep in his own half in a moment of transition Maddison has the quality and the vision to quickly assess which of the forward options are the best choice for a pass to be played. In this instance, he chooses to play an immediate pass releasing the forward on the near side. His ability to make quick and clinical decisions in these areas is reminiscent of the highly rated Dutch midfielder Frenkie De Jong. 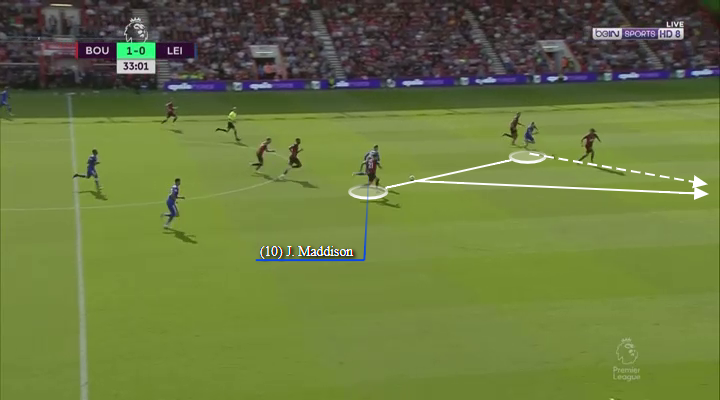 Here again, we see Maddison operating in transition as he moves to attack the final third with the opposition struggling to get back into their defensive position. The pass is an obvious one as the striker looks to make a diagonal run from the defender’s blind side across the front of them towards the edge of the penalty area.

What is key however is the timing and the disguise on the passing movement from Maddison. He holds possession of the ball until the forward is crossing over the front of the defending player and releases at the right time with the correct weight of pass. Sometimes these small technical details in a players actions in possession can be overlooked but the truth is that at the top level these small details can be absolutely key.

Points to work on

There are two main points that need work before Maddison can truly be said to have ascended to the highest level. He still takes too many shots from less than optimal areas and his defensive work rate can be somewhat lax.

To some extent, Maddison has always been a high volume shooter and you could argue that Leicester knew exactly what they were getting when they agreed to pay the price that they did to secure his services. He is a supremely confident player who quite simply backs himself to score from distance in and around the final third of the field. There is some suggestion around football that this willingness to shoot will be ‘coached’ out of the young attacking midfielder but in truth, it is likely to become less prevalent in his game as he gets older. The assist and goal numbers we mentioned above show that Maddison is getting into good positions with the ball, as long as he continues to do so the coaching staff at Leicester will be content to allow him to shoot.

In terms of his defensive outputs, there is more than Maddison could do. In his time at Norwich and now at Leicester Maddison is very much a key part of the attacking gameplan. To this end, his coaching staff appear to be content to allow Maddison to remain a free spirit in the defensive phase. If he is to continue his upwards career trajectory though and move to a bigger club at some point in the future then he will have to become more adept at working back in the defensive phase.

In terms of making an impact following a high profile transfer, there can be no doubt that to this point James Maddison has been a success for Leicester City. His confidence and intelligence on the ball have added an extra dimension to Leicester City in their attacking phase.

The key now is for Maddison to continue his excellent form and improve his consistency going into the second half of the season. If he does so then there is no doubt that Gareth Southgate will turn his attention to Maddison to be the answer to the lack of creativity from England.