Lazio are the in-form team in Serie A at the moment, now having won their last 10 straight games after downing Napoli 1-0 in this latest edition of Serie A action. Simone Inzaghi now finds himself leading a title challenge that not many would have seen coming at the start of the season.

Napoli are trending in the opposite direction, however, after replacing Carlo Ancelotti with Gennaro Gattusso, Napoli have only won three points out of a possible 12, losing three out of four along the way. This latest result sees Napoli slip to 10th in the table as they are rapidly falling out of contention for any of next year’s European qualification places.

Our tactical analysis will look at the tactics on display in this game and detail where the game was won and lost for the respective sides. This analysis will aim to provide a diagnosis for Napoli’s issues as well as explain just how Lazio’s tactics have led them to their current, lofty position.

Inzaghi kept his side true to the 3-5-2 formation that has served them so well over the course of the season with the only real change involving Joaquin Correa, who was absent from the matchday squad, so his place was taken by the striker, Felipe Caicedo.

Gattuso’s introduction in Naples has featured an abandonment of Ancelotti’s preferred 4-4-2 in favour of the 4-3-3 formation that served the Blues so well under Maurizio Sarri. Amid all the transfer speculation surrounding the player, Dries Mertens missed this game so the duty to lead the line fell on the shoulders of Arkadiusz Milik who was flanked by the usual suspects of Lorenzo Insigne and José Callejón. There was an unorthodox role in this game for Giovanni Di Lorenzo who started at centre-back in the absence of Kalidou Koulibaly despite the fact that Sebastiano Luperto and Lorenzo Tonelli were available for this game. 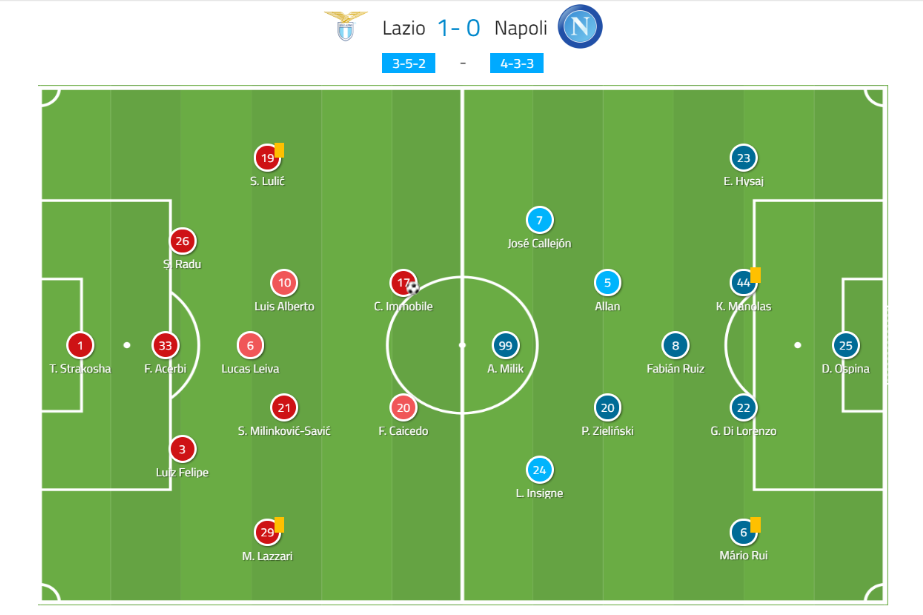 Napoli certainly dominated the possession statistic in this game, ending the match having “enjoyed” 64% possession but their play on the ball was significantly stifled by how Lazio’s defensive block marshalled their progression up the pitch.

Firstly, Lazio’s defensive block wasn’t designed to press Napoli high up the pitch and instead adopted a medium block approach, with the whole team compact in a shape which engaged the opponent once they reached the middle third of the pitch. This gave Lazio all the benefits of sitting deep enough so as to protect their side against any long balls over the top as well as the ability to disrupt Napoli’s build-up play further away from their own half.

Specifically, however, in order to compensate for their narrow formation and lack of wide men, Lazio utilised their wide central midfielders, Sergej Milinković-Savić and Luis Alberto, to close down the opposition full-backs in order to prevent the away side from creating an overload down the flanks. In the buildup phases of Napoli’s possession, this prevented Napoli from having an easy out-ball to bypass Lazio’s lines of pressure.

Using the central midfielders in this way also left Lazio’s strikers free to serve two purposes. To accommodate one of the central midfielders shifting wide to engage a full-back, one of the strikers would drop in order to cut off the passing option to Allan who would sit at the base of Napoli’s midfield trio. The other purpose this would serve would also allow for the two strikers to remain central threats in between Napoli’s midfield and defence on the counter-attack in the case of any turnover in possession.

Missing Correa’s link-up play for this game, which has been a common feature of Lazio’s liquid attack for most of this season, it was vital for Lazio to seek to systematically create chances for themselves on the turnover as their possession play struggled with Caicedo now in the side.

Without Correa’s ability to drop deep and interchange with the likes of Milinković-Savić and Alberto in midfield, Lazio lacked some of the dynamism they’ve previously showed in between the opposition’s lines as both Immobile and Caicedo’s strengths don’t lie in how they operate in between the opponent’s lines, but in how they stretch the pitch vertically with their movement in behind the opponent’s defence.

In the above example, not a single player in Lazio’s attack is encouraging a more patient approach. No one is showing for the ball or looking to receive the ball in the central space left wide open by Napoli, instead, everyone is encouraging the early hopeful cross into the box which Lazio aren’t even set up to compete for the second ball for. Had Correa been in the side, he could’ve mirrored Milinković-Savić’s movements into the box and helped to encourage the creation of a more reliable attack.

It did give Lazio more presence in the opposition’s box when attacking crosses, which has also been a heavy feature of Inzaghi’s Lazio, but I fear this particular team selection placed too much emphasis on this side of their attack as opposed to their rapid build-up play through the centre, which came as a result of the number of bodies Lazio could use to invade and affect the play in between Napoli’s midfield and defence.

Despite the influence of a new manager and a need to turn results around, Napoli lacked the urgency in their attack which they needed to break down Lazio’s defensive block. The way in which Lazio were setup forced Napoli to have to be patient in possession and circulate the ball from left to right along their backline, probing for any weakness which they could exploit.

The problem for Napoli was the attackers in front of the backline simply didn’t shift over as quickly as their opposition, often leaving the player on the ball with a lack of options to pass forward to. This didn’t allow Napoli to accelerate the play at the precise moment they needed to in order to get inside and behind Lazio’s defence on a consistent basis.

Considering Lazio’s disciplined defensive approach in this game, this was a disappointing showing from Napoli’s front six who simply didn’t do enough to help their backline turn up the heat in this game. Napoli lacked inspiration and the combination play that could’ve earned them the result in this game considering Lazio’s own struggles, and this fact was only further compounded once Fernando Llorente was subbed on for the visitors.

Despite the big names on both sides of the ball, this was a rather stale and dull affair between two offences who struggled for one reason or another. The state of this fixture was reflected and decided in the manner in which Napoli conceded their defeat, with David Ospina too complacent on the ball so as to allow Immobile to rob him in possession and produce a shot towards goal which Di Lorrenzo simply couldn’t stop from crossing the line.

Napoli are in a bad way and their performance in this game suggested little is likely to change in the coming weeks. Gattuso’s players didn’t appear to have the mental capacity to challenge this inform side, rarely able to apply the pressure when it counted despite their dominance in possession and in the end they yielded to an easily-avoidable goal.

Lazio earned the slice of luck that got them the win in this game which kept them on this hot streak of form that has propelled them to third in the table and right into the title race. Whilst it’s clear that Lazio suffered without the influence of Correa, they did what all good teams do and found a way to win the game without being at their best. So long as Lazio aren’t without Correa for too long, there’s no reason to suggest why Lazio’s run of form shouldn’t continue.