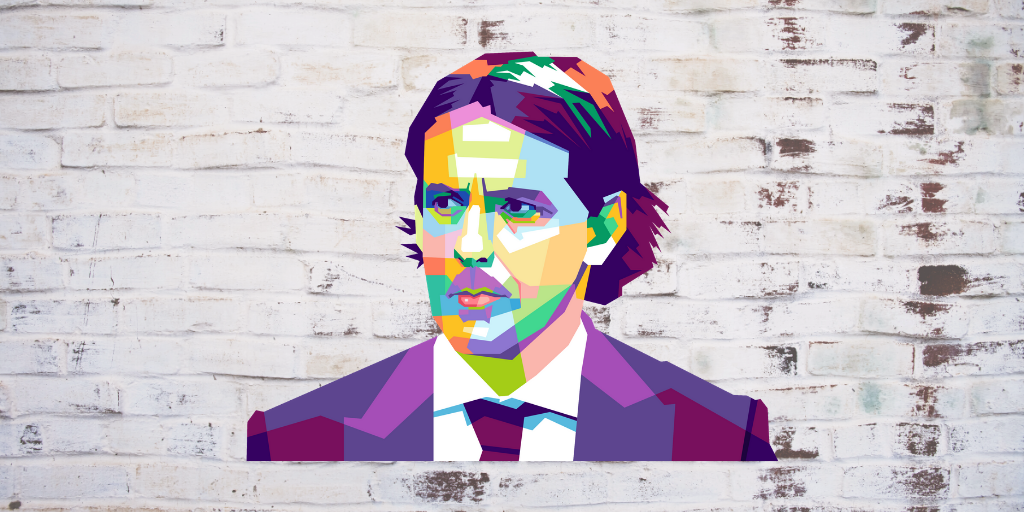 Lazio have been the most impressive team in Serie A this season in regards to their budget
and are sat third in the table at the time of writing, six points off league leaders Inter but with a game in hand. Just before Christmas, Lazio beat Juventus 3-1 for the second time this season, but this time it earned them the Italian Super Cup and their first trophy of the
campaign. Due to that game, they lost their position as top scorers in the division since
Atalanta put five past AC Milan. Still, Lazio will likely end the season among the division’s
top scorers, and this tactical analysis will look at how Simone Inzaghi sets them up in attack.

Lazio’s build-up play is not really methodical; Inzaghi wants them to progress the ball
quickly and often chooses to bypass an opposing press with longer passes towards Sergej
Milinković-Savić. Mainly, though, Lazio look to progress the ball along the ground through
the use of third-man combinations in central areas. In the image below, we can see the basic build-up shape when attacks are started. They play 3-5-1-1 so there is a back-three and a defensive midfielder, most often Lucas Leiva, tasked with beating the first line of pressure. The back-three is always set up as below with the central centre-back, Francesco Acerbi, positioned in an angle behind the outer centre-backs. 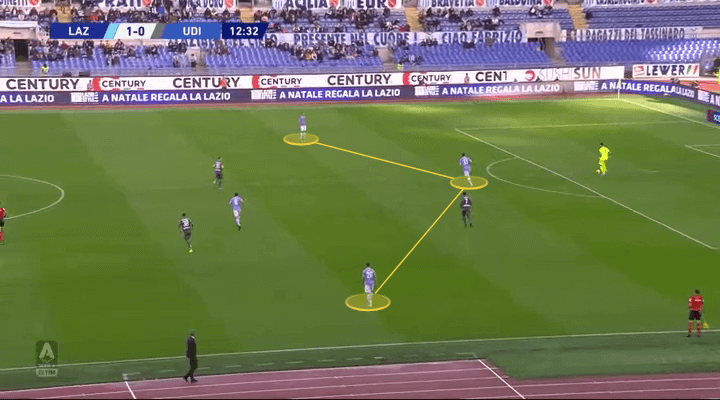 The image below highlights Lazio’s overall build-up shape with a back-three, three central
midfielders, two wing-backs (one out of shot) providing the width and a front-two that is
often set up with one behind the other, usually with Joaquín Correa slightly behind Ciro
Immobile. 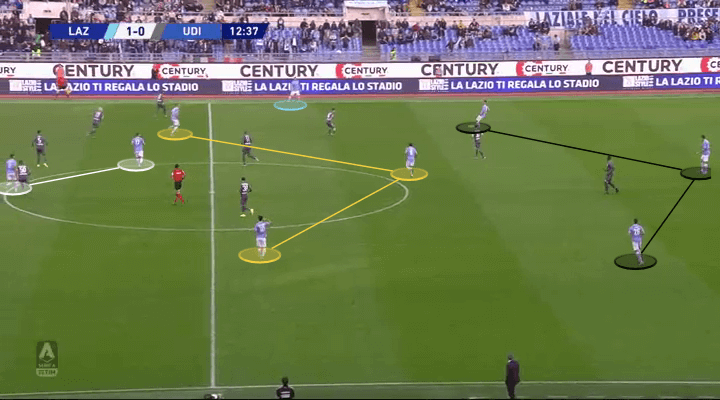 The structure always remains, yet there is a high degree of fluid movement, by Acerbi in
particular, when Lazio are up against a team that opts to press them high. As you can see in the image below, Acerbi steps up from his position to become an option higher up as Lazio create a situational back-three with goalkeeper Thomas Strakosha and the two outer centre-backs. Thus, Acerbi provides a second option behind the first pressing line which helps Lazio progress the ball. 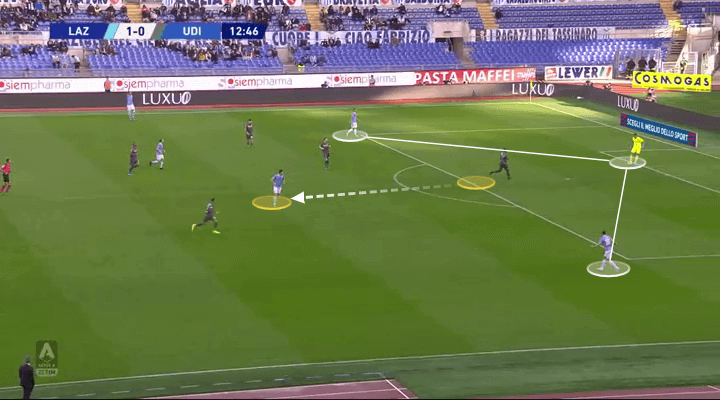 Acerbi is one of Serie A’s best ball-playing defenders and has been for years, and it is his
movement and passing ability that often help Lazio bring the ball out cleanly. In the image
below, Leiva is pressed and facing his own goal. As a result, Acerbi steps out of the striker’s cover shadow and provides an option to bring the ball out. Leiva plays him in and Lazio get out of the press. 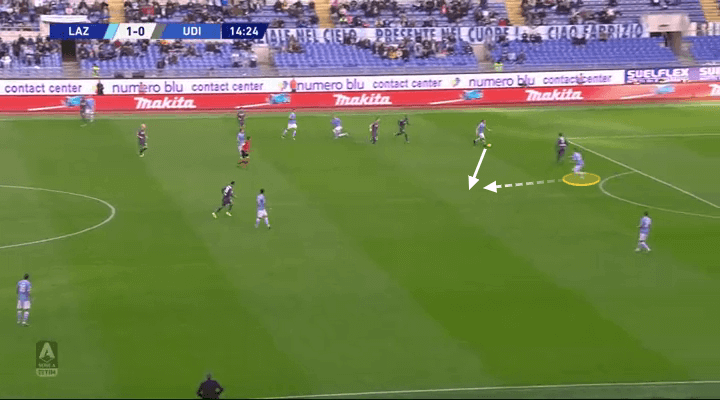 Another player who is normally key to the success of Lazio’s possession play is Luis Alberto. The Spaniard is Lazio’s best and most comfortable passer, as well as being their most creative player alongside Correa. When Lazio struggle to progress the ball cleanly, Alberto (yellow) often drops deeper, as highlighted below, to provide a second midfield option behind the opponent’s press. This movement helps relieve Leiva (white) of some pressure and gives Lazio a situational double pivot in midfield to help them move the ball forward with control. 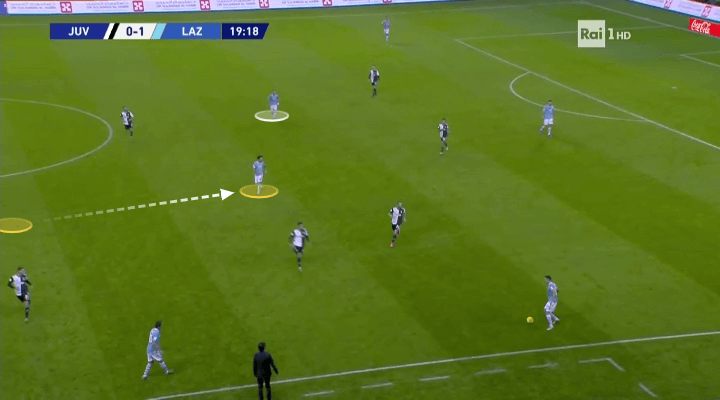 Combination play between the lines

The main principle of Lazio’s attacking play is combination play to get players facing
forward between the lines. This is the key to the effectiveness of Lazio’s attacking play since they manage to get their best creators such as Alberto, Correa and Milinković-Savić facing forward between the lines to feed the superb runs of Immobile. The main method they use to create such situations is third-man combinations. In the image below, Luiz Felipe’s pass is back-heeled by Milinković-Savić into the path of Immobile who can attack the Udinese defence at pace. The key to these combinations is that Lazio’s midfielders consistently make supporting runs to the player receiving the first penetrating pass and thus provide options to lay the ball off to. 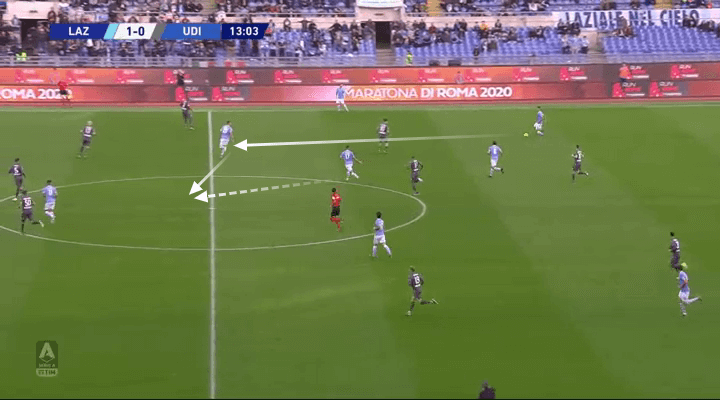 Lazio always have players between the lines and create space for them by having their
attackers either drift wide or run into depth to create that extra bit of space to turn and affect the game. In the image below, Immobile has drifted wide right while Correa has drifted wide left. This creates confusion for Milan’s centre-backs, allowing Alberto some extra time to turn and face forward. A few seconds later, Immobile scores. 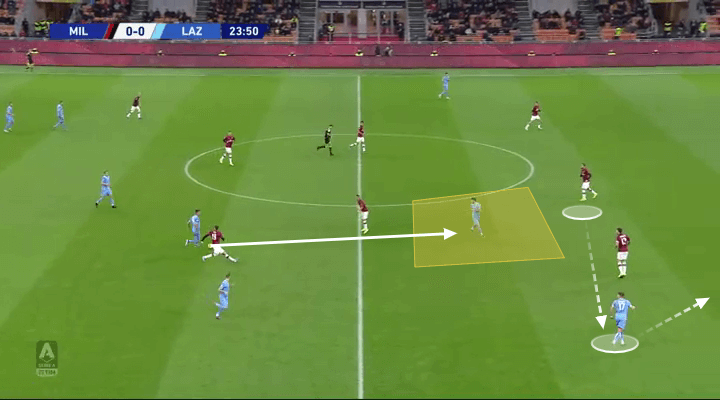 Another similar situation can be seen below. Here, Lazio have lured Sassuolo’s midfield to
press them, creating space for Correa to drop into. Alberto duly slips the ball into the
Argentine attacker. 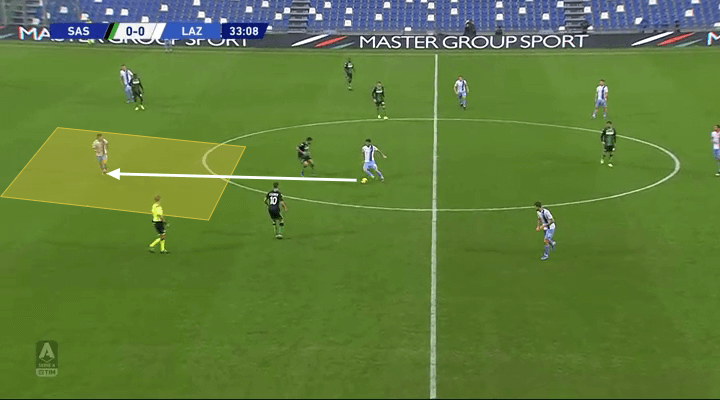 Correa then turns, as you can see below, and plays Immobile in on goal. The run Immobile
makes in this situation is a trademark run of his, which is the movement Lazio’s midfielders
always look to spot. He always peels off into the left-sided half-space channel and is deadly
when running at defenders from there. 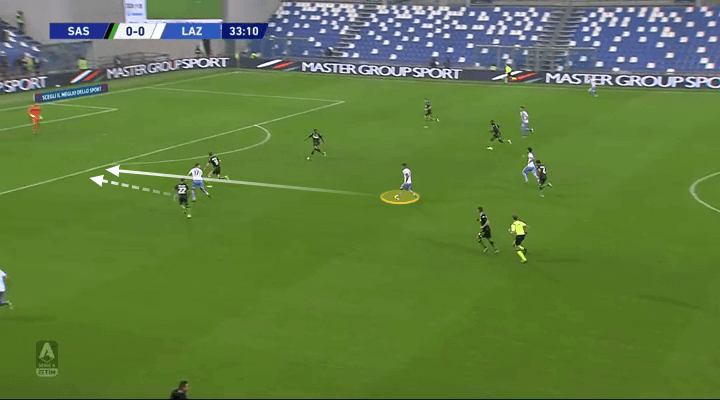 We can also see a method of Lazio’s possession play in the combination play between the
two forwards Correa and Immobile. We often see the left-sided centre-back, Ștefan Radu,
really push passes into the front-two. They position themselves close to each other, and as the ball is played, the one closest to the ball will let it run past him, spin, and attack the space in-behind, which the other will look to access with a first-time pass. We can see this approach below as Immobile (yellow) lets the ball run across his body to Correa, but the Argentine fails to release Immobile on this particular occasion. 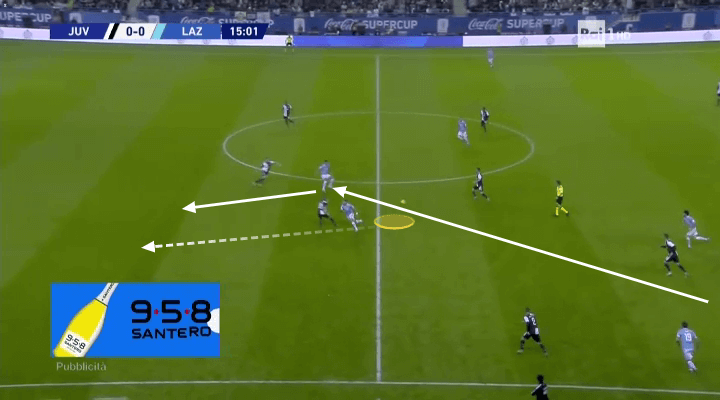 Lastly, it is not uncommon to see Immobile drop off the front to overload midfield and leave the opposition defence without anyone to mark. We can see this in the image below as the Juventus defence has no striker to concern themselves with. However, Lazio will then have Immobile (white), and two of Correa, Milinković-Savić and Alberto (all yellow below) attack the box. This creates an element of unpredictability as it is so much more difficult to defend against players moving into the box at pace rather than players already standing there. 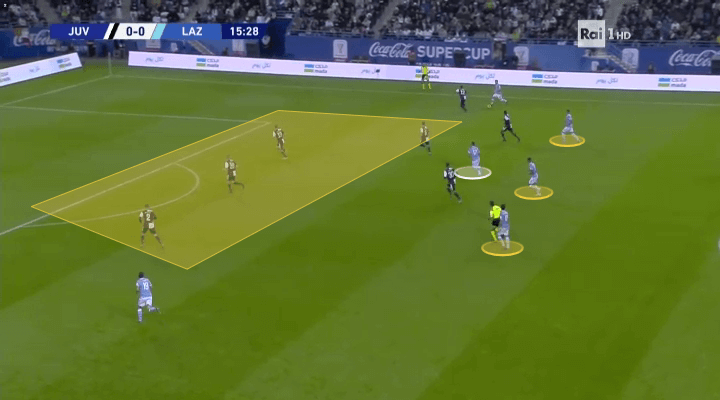 Lazio excel with their combination play in central areas, but what makes them such a
dangerous team is their ability to combine their central approach with excellent wing-play.
Their wing-backs, usually two from Senad Lulić, Jordan Lukaku, Jony, Adam Marušić and
Manuel Lazzari, always maintain maximum width and are direct in their movement to attack the wide areas. They will then look for crosses from close to the touchline, or play the crosses in early, for the players to attack. Crucially, Lazio fill the box with players to attack crosses. The image below highlights Immobile’s goal at Fiorentina when Lazio fill the box with four players and have two (yellow) just outside ready to win a second ball. 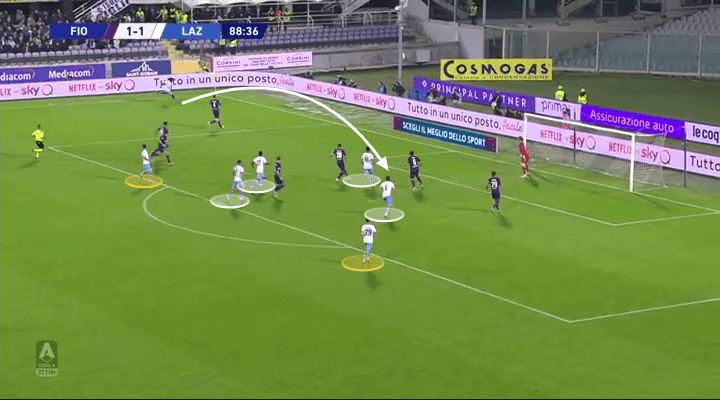 The below image highlights Immobile’s goal against Celtic when Lazio again fill the box
with four players to attack Lazzari’s cross. On this occasion, the cross is played in early and
reaches Immobile at the back post. 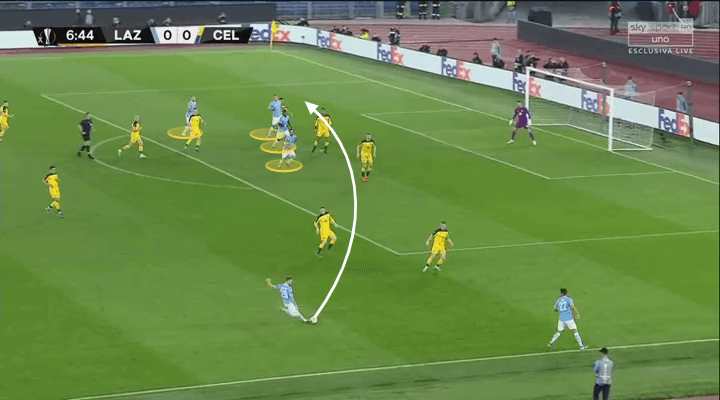 Thanks to Immobile’s movement and Milinković-Savić’s physical presence, Lazio are always
a threat from crosses, but it is mainly when chasing games with Felipe Caicedo on the pitch
that Lazio are at their most dangerous.

The roles of Alberto and Milinković-Savić

As mentioned above, Alberto often drops deeper to get on the ball to aid progression of the
ball. Also, the Spaniard is Lazio’s main creative outlet so it makes sense for him to drop
deeper in search of the ball to then go and affect the game. Milinković-Savić, however, has a very different role. True, he might drop deeper to get on the ball at times but, mainly, he
moves a lot higher and almost pushes right up alongside the strikers but in the right-sided
half-space. From there, the Serbian is a major threat to opposing defences with his physicality and sublime ability to act as a target man. This allows Lazio to bypass an opposition press to instead find the Serbian with longer, more direct passes. In a way, Lazio’s use of him in this way is quite similar to how Manchester United often made use of Marouane Fellaini’s splendid hold-up play. When the ball is played to Milinković-Savić in the air, the likes of Correa and Immobile are quick to find space around him for flick-ons or second balls.

Additionally, Milinković-Savić also makes clever runs in-behind the back of the ball-far
centre-back when the ball is on the left-hand side. We can see such an example in the image below, taken a few seconds before the Serbian scored against Juventus. Alberto (yellow) is on the ball on the left and spots Milinković-Savić’s (white) well-timed diagonal run off the back of Matthijs De Ligt. 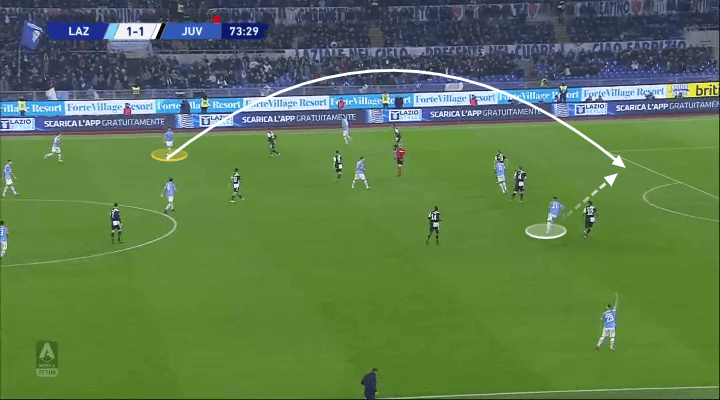 We can see a similar situation below but, on this occasion, Luiz Felipe’s ball is brought down by the Serbian who instead sets up a teammate to shoot. The well-timed run and the ability to bring the ball under heavy pressure to set up a teammate illustrates everything Milinković-Savić brings to Lazio in this aspect of his and their game. 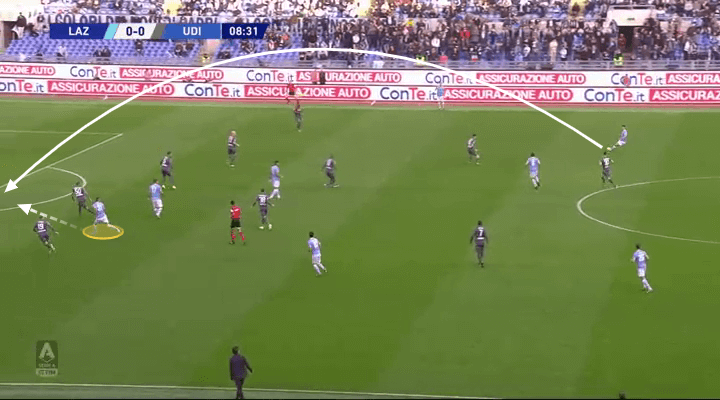 The 24-year-old is also a massive threat from crosses due to his clever movement, sheer
physical presence and heading ability. The image below highlights his goal against Lecce.
Acerbi plays an early cross from the left and Milinković-Savić’s clever run off the back of the ball-far centre-back allows him to get to the ball before the left-back and score. 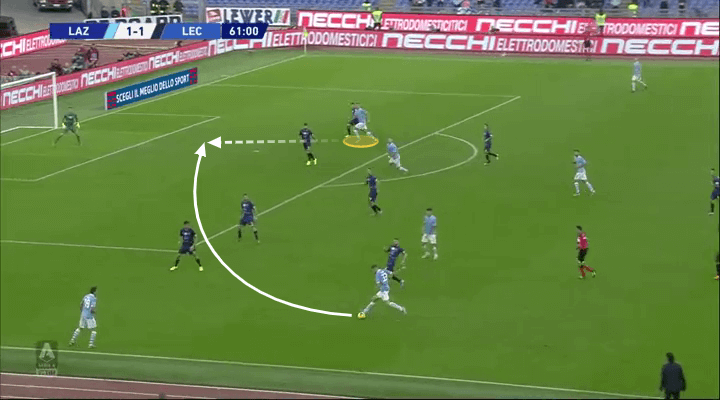 As this analysis of Inzaghi’s philosophy has shown, Lazio’s attacking tactics under Inzaghi are aimed towards progressing the ball quickly by combining in central areas to get players facing forward and/or release the wing-backs and fill the box to attack crosses. Additionally, the contrasting midfield roles of Luis Alberto and Milinković-Savić give Lazio an interesting dynamic in their attacking play. Overall, Inzaghi’s Lazio are one of the best sides to watch in Europe and, now that they have started to add trophies to their exciting style of play, the tactician might soon be prepared to leave Rome for a bigger club.