How Paco Jémez challenged the positional play of Setién

Sometimes football can be so romantic and beautiful. During the international break, Rayo Vallecano announced that Paco Jémez was going to return as the new head coach. In his first period in charge of the small club from Madrid, Jémez was capable of developing a style which was not only beautiful to watch but almost led them to Europa League qualification.

However, at the end of his spell, he was also responsible for the losing streak which led to relegation. Now Jémez has to save them from relegation. Against Real Betis, he made the first step.

That duel was a special one. Pep Guardiola once said that apart himself, only Michael Laudrup and Paco Jémez fully installed positional play. Quique Setién is kind of a successor of those two coaches and has also committed to the philosophy embossed by Johan Cruyff. Under Setién Real Betis play a beautiful style of football compared to last season when they were struggling to even score. The draw against Rayo doesn’t help them much in their fight for a European spot next season.

In his first game back as head coach of Rayo Vallecano, Paco Jémez lined up his team in a 4-3-3. In front of goalkeeper Stole Dimitrievski, Tito, Abdoulaye Ba, Jordi Amat and Àlex Moreno formed a back four which spread out wide in possession. In particular, the latter had a great game. Moreno was an instigator in attack as Real Betis searched for a solution against his dribbling throughout the whole game.

Mario Suárez was the defensive midfielder while José Pozo and Álvaro Medrán supported the former Atlético player. Up front Paco Jémez decided to use Álvaro García, de Tomas and Bebé. 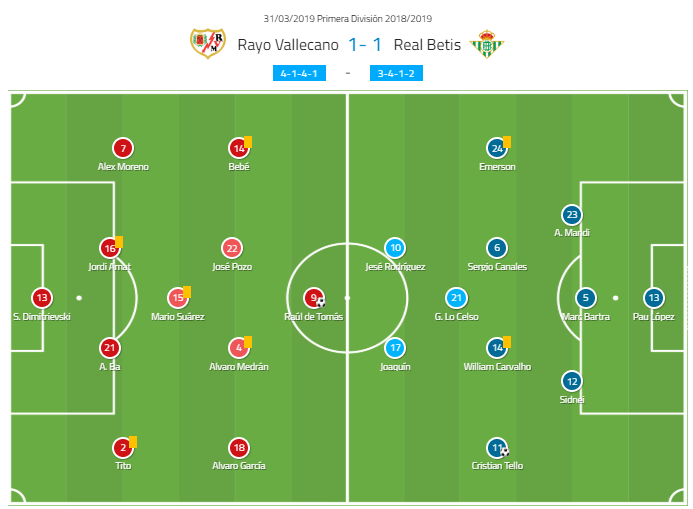 Quique Setién on the other side used his usual 3-4-1-2/3-4-3. Ball-playing goalkeeper Pau López was involved in the build-up regularly with the centre-backs Marc Bartra, Sidnei and Aïssa Mandi.

Sergio Canales and William Carvalho were responsible for the connection in midfield while Emerson and Christian Tello were positioned wide to stretch the opposition defence. Up front Real Betis played without a real striker. Giovani Lo Celso, Joaquín and Jesé were constantly moving between the lines, but Betis struggled to find them in the first 30 minutes.

Paco Jémez is well-known for implementing the principles of positional play and a very aggressive pressing. Against the well-structured build-up of Real Betis, Rayo used a ton of man orientations to be able to press immediately.

Rayo Vallecano defended in their 4-3-3 focusing on closing the centre. The three midfielders oriented to one of Betis’ three guys in the centre. While Suárez covered the passes to Lo Celso, Medrán and Pozo were following Carvalho and Canales. Both defensive midfielders got pressed immediately and struggled to turn with the ball in order to find Lo Celso and the strikers between the lines.

Furthermore, the strikers pressed the back three of Real Betis. Due to the narrower position of Bebé and García against the ball they closed the half-spaces and pressed Sidnei and Mandi, while Batra had to face de Tomás.

Logically, the full-backs of Rayo Vallecano moved out of position in order to face Tello and Emerson on the wing. However, for the rest of the possession phase they tried to support their centre-backs against Joaquín and Jesé who moved a lot in order to create space.

As a consequence, Rayo Vallecano could immediately press, tightening the space available by pushing the back four close to the halfway line and therefore disrupting Betis’ rhythm in possession. In the first 30 minutes, Betis struggled to accomplish more than four passes in a row because of the pressing of Rayo Vallecano.

Occasionally, Rayo would close the passing lanes and continue to press after a pass was played. However, they usually stuck to their man orientations. After a while though, Betis found solutions and used the weaknesses of that approach.

How Betis exploited the man orientations

Betis needed a few minutes to adjust in order to find ways through the pressing of Rayo. Due to the high defensive line of Jémez’s side, Betis tried to play long passes behind the last line when the Madrid side couldn’t apply enough pressure.

Consequently, Betis created a lot of turnovers because rarely one of the passes behind the lines managed to find a Betis player. The problem with those passes was that Betis couldn’t counter-press quickly.

After a while, they adjusted. By using the goalkeeper frequently in the build-up, Betis could create an overload and therefore find openings in the defensive shape of Rayo because they pressed López as well. The strategy was very effective when one of the midfielders moved out of position more quickly than his opponent was comfortable with, forcing him to leave his position. Furthermore, Pau López is a very skilled player with the ball on his feet. Consequently, he could play precise passes to the midfielders.

Overall, Betis’ central players started to move more after Rayo took the lead. Against a very man-oriented defence, body movement is crucial to open spaces and exploit with quick dribbles or passes under pressure. In such scenarios, Betis were very successful moving the Rayo defenders to one side in order to exploit the far side after a few passes.

Together with the centre-backs who were more aggressive in possession and tried to overplay the first line of pressure by dribbling, Betis were able to create more dangerous situations. However, the lack of precision in passing and positioning prevented better chances.

As I already mentioned, Paco Jémez selected a 4-3-3 formation against Betis, and Rayo showed the first glimpses of eventual development of a positional play system. In their 4-3-3 formation, the centre-backs were positioned wide while the full-backs moved higher. The defensive midfielder created a triangle and was supported by both central midfielders.

The winger usually moved into the half-space and was positioned in the first attacking line together with the striker. On the left side, you could occasionally observe Bebé keeping close contact with the sideline while left-back Moreno dribbled through the half-space.

Overall, it was obvious that Rayo didn’t have a lot of time to train the right positioning and it was quite chaotic. However, they managed to combine with speed on the wing and their crosses were quite dangerous. The best example was their first goal.

Furthermore, their counter-pressing was massively improved because of the better positioning in possession. It is going to be interesting how much Jémez can improve the positioning and their game in possession in the coming weeks.

Paco Jémez’s debut back at Rayo had some promising aspects and the Madrid-based side is going to be one of the more interesting teams in La Liga. Betis are still struggling this season. Although their build-up process is still well-structured, they have to fix their issues offensively to create more chances and convert them. If not, they are not going to make the European qualification spots.