The seventh game of the Premier League season saw Newcastle United draw 1-1 at home to Bournemouth, with the home side coming from behind thanks to a VAR decision that caught spectators and players off guard in a tepid encounter at St James’ Park. Prior to the match, Newcastle and Bournemouth sat in 11th and 13th place in the league, respectively, with each moving up the table one place after the game. Having only scored a combined total of 12 goals, and with crucial Newcastle players Callum Wilson, Jonjo Shelvey, and Allan Saint-Maximin all injured, no one expected the game to be a goal-thriller, but the match still drew its fair share of criticism for a lack of quality.

Managerless Bournemouth put the 9-0 thrashing by Liverpool that saw Scott Parker sacked behind them with a goalless draw to Wolves and a 3-2 win over Forest in the lead-up to the game. Interim Boss Gary O’Neil set his team up for the counterattack with Eddie Howe hoping that the return of Bruno Guimaraes would add a much-needed creative spark. As Newcastle had not won since the first game of the season against the hapless Nottingham Forest, Howe was eager to see if the demands he made of his players had worked.

Bournemouth currently face a lot of uncertainty, both on and off the pitch. While still searching for a manager after Scott Parker’s sacking, they are now in the midst of a potential takeover by American hockey team owner Bill Foley. This match would surely be the perfect opportunity for Newcastle to take advantage of Bournemouth’s instability and get their second win of the season.

In this tactical analysis, we will examine how threadbare the Newcastle attack looks with only three of their attacking players missing. It will also be an analysis of the tactics deployed by both managers throughout the game. 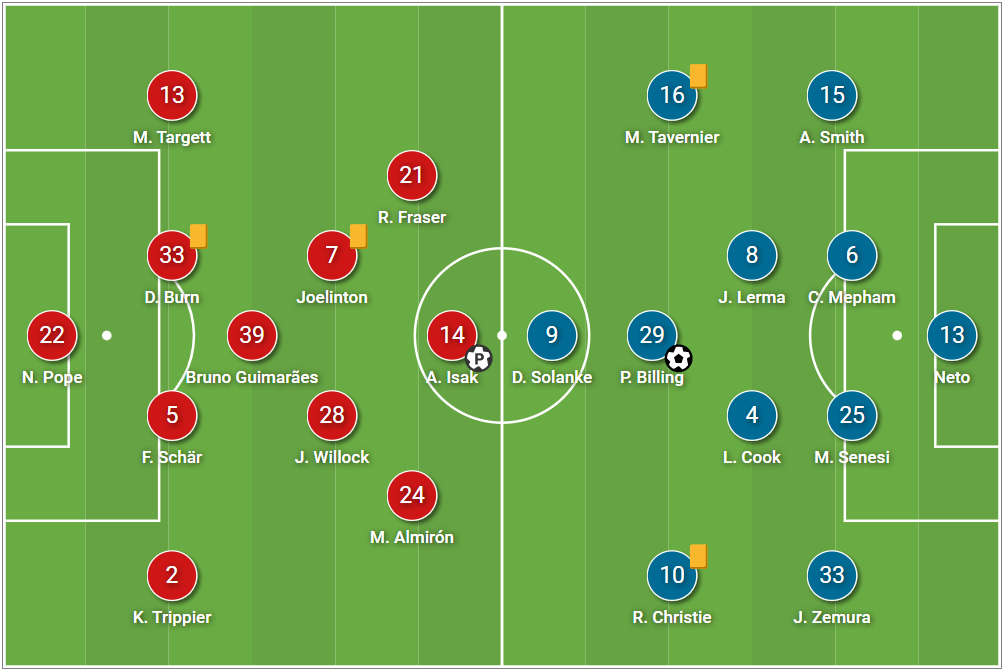 Newcastle lined up with a 4-3-3, with Bruno Guimaraes filling in as the defensive playmaker in Jonjo Shelvey’s absence, Ryan Fraser filling in for Allan Saint-Maximin as the inverted left winger, with left-footed Miguel Almiron on the right wing. Former Real Sociedad frontman Alexander Isak started as a lone striker and looked to score his first goal at St James’ Park. Noticeably absent from the starting eleven was Sven Botman, who was benched to make way for Dan Burn, who was chosen for his ‘leadership qualities’.

Bournemouth lined up with a more conservative 4-4-1-1, with Philip Billing’s position ranging from defensive midfielder to a number 10 position behind Dominic Solanke, who had only scored once so far this season, averaging 1.6 shots per game. O’Neil only made one change to the team that beat Nottingham Forest three weeks prior, with Marcos Senesi replacing the injured Lloyd Kelly in defence

The biggest talking points after the game were the players Newcastle sorely missed and their inability to break down a stubborn Bournemouth defence that had conceded 18 goals in 6 games so far this season. The game took a while to get going after a sombre opening that saw both teams and spectators pay respects to Queen Elizabeth’s passing, which naturally had an effect on the atmosphere. Other than Kieran Trippier’s 27th-minute freekick hitting the outside of the post, the only other thing of note in the first half was a flurry of activity in the last five minutes, which saw Joelinton hit the post before he and Fraser forced saves from Neto.

Newcastle’s attacks mostly came from Willock, Fraser, and Almiron, who only attempted 1 right-footed cross in the whole match from his inverted winger position. In the second half, they showed much more reliance on Trippier, who had his most attacking game so far this season. In total, he chipped in with 20 crosses, 120 touches, and the most passes at 112 (almost half of Bournemouth’s total passes, who made 245 passes as a team). 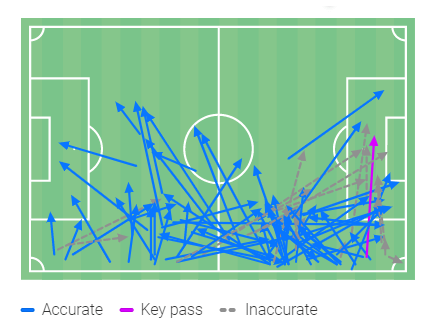 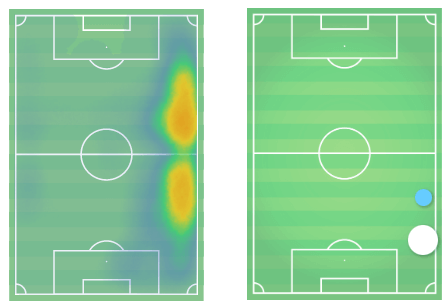 Howe’s tactical approach was a strange one, as bombarding the Bournemouth box with cross after cross (33 in total) and not having a natural target man leading the line would always result in very few headed shots. Out of all 81 of Isak’s career goals, only 8 have been scored with his head (7%), despite being 192cm tall, a whole centimetre taller than Newcastle’s Chris Wood, who has headed a slightly more convincing 17% of his goals (23 goals out of 136).

Isak’s lack of aerial threat was made obvious in his home debut against Crystal Palace, where he looked awkwardly outmatched every time he made a challenge in the air, and his need for improvement was there for all to see again versus Bournemouth. In the 58th minute, a Willock cross was totally ignored by a static Isak – who rarely attempted headers or aerial duals – only to be met by the head of Ryan ‘Wee Man’ Fraser, the Premier League’s second shortest player at 163cm.

Not surprisingly for someone of such diminutive stature and who has scored all of his 21 career goals with his feet, his looping header landed safely in the hands of Neto. Chris Wood was eventually brought to accompany Isak up front and give Trippier something else to aim at, but with only 70 seconds of normal playing time left, he could hardly be expected to have much influence on the game. 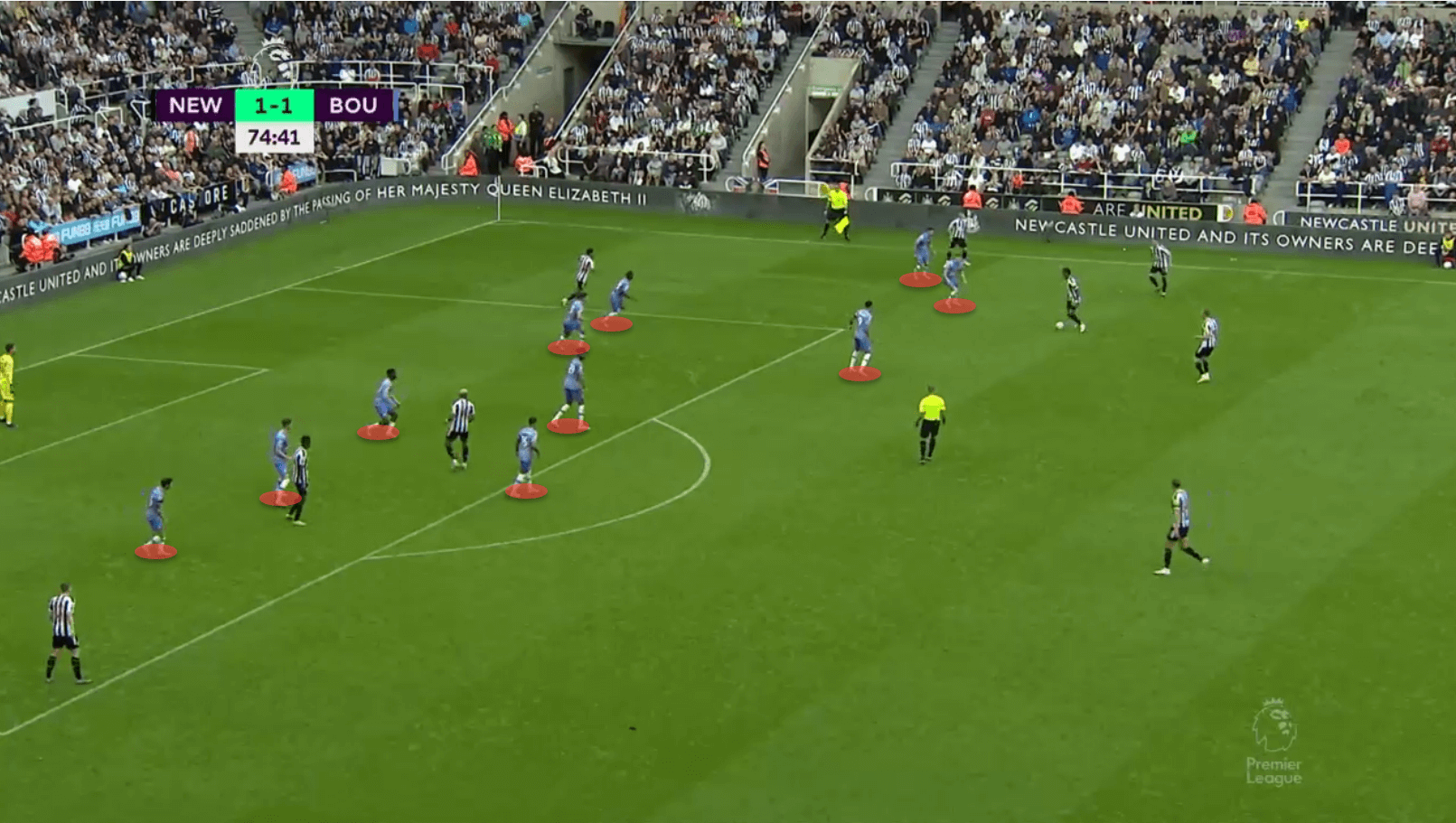 A familiar sight to Newcastle, who often faced 11 Bournemouth players sat deep behind the ball

The game saw the return of Bruno to the Newcastle midfield, but his impact was restricted from having to fill in for the injured Shelvey as a deep-lying playmaker. Rather than enjoying his usual free role further up the pitch, Bruno was mostly seen in front of Newcastle’s back four and never strayed too far into the opponents’ half.  From the centre of the pitch, he made the majority of his 61 passes to the right wing for players higher up the pitch to cross into a crowded penalty area.

Howe’s instruction to get the ball wide meant that Bruno played very few balls through the centre and made only one pass to Alexander Isak in the 72 minutes he was on the pitch: a short pass in the Newcastle half as they were transitioning from defence to attack near the hour mark. 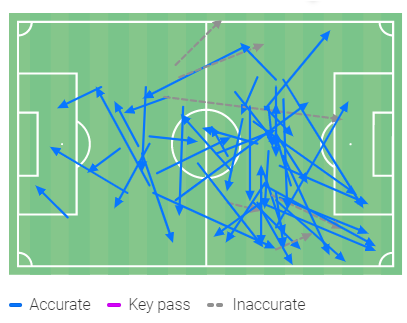 Bruno’s pass map vs Bournemouth, showing all 61 passes, including a large number of diagonal balls to the right wing 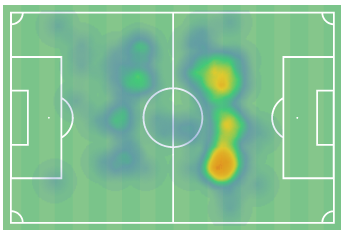 Newcastle’s casual approach to attack meant that Bournemouth always had plenty of time to regroup. Happy to sit back and let Newcastle have the ball, the home side could do very little to break down Bournemouth’s low block, even with 72.4% possession. The game had a fairly lethargic pace throughout, which was encouraged by O’Neil’s time-wasting tactics, starting in the 5th minute when Neto went down to receive treatment after making an innocuous pass to Lewis Cook.

Bournemouth did not look like a team desperate to win and O’Neil admitted afterwards that he was happy to come away with a point, boasting in his post-match interview “I never really felt under threat”, which showed either confidence in his players’ ability to defend or confidence in the knowledge that Newcastle would be toothless without their key attacking players.

As well as looking comfortable defensively, they looked effective in transitioning to attack and were always ready to take advantage of Newcastle’s high press, using one-touch passes and through balls to make swift attacks. Despite only having half as many shots as Newcastle, with 10 attempts in total, they still caused problems for their defence. A sluggish-looking Trippier was often beaten by the pacey Tavernier and Solanke, and Burn often had to race back to walk out or clear any through balls. In their counters, Bournemouth often made seamless transitions with slick passing and runs into space. 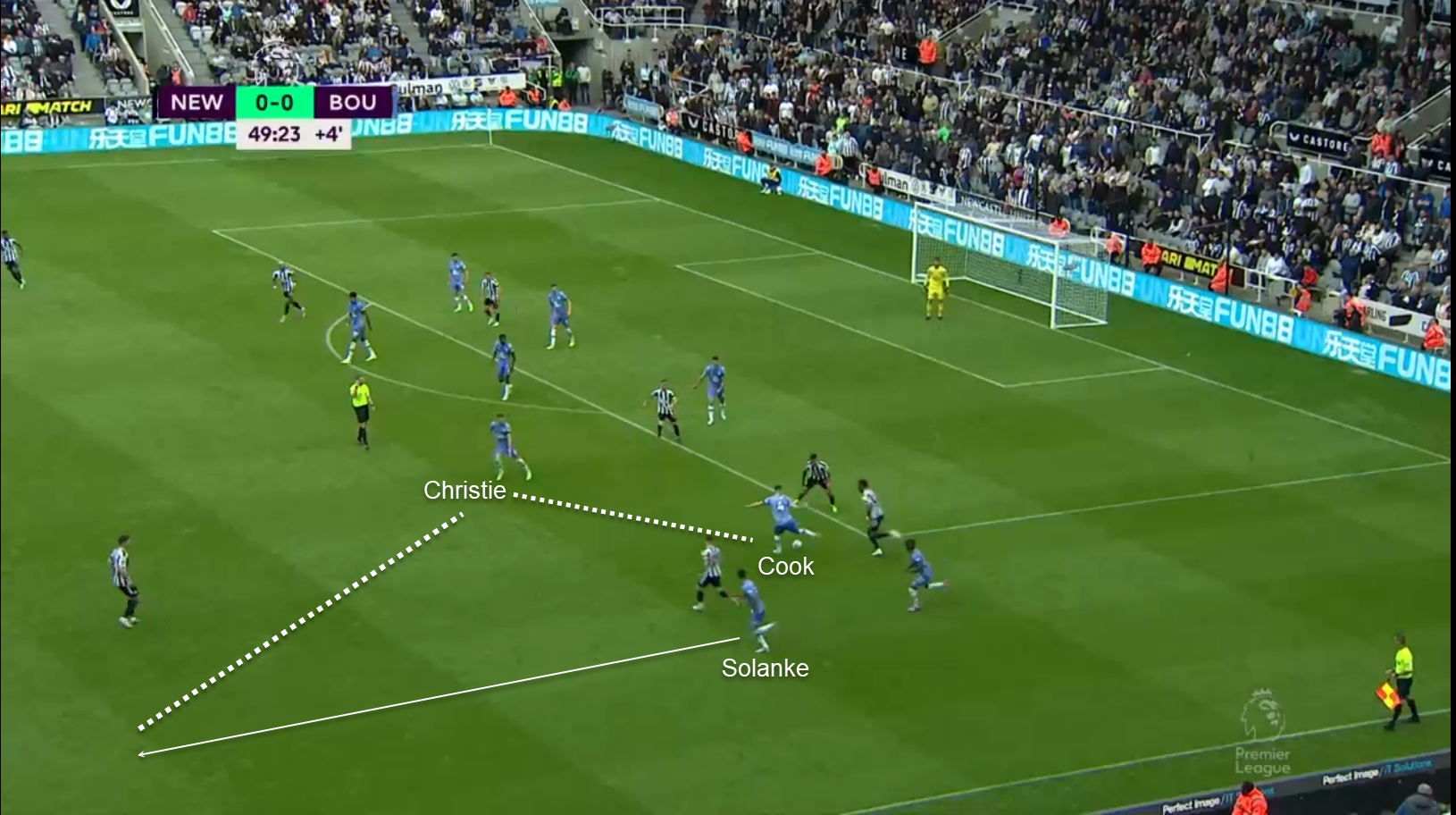 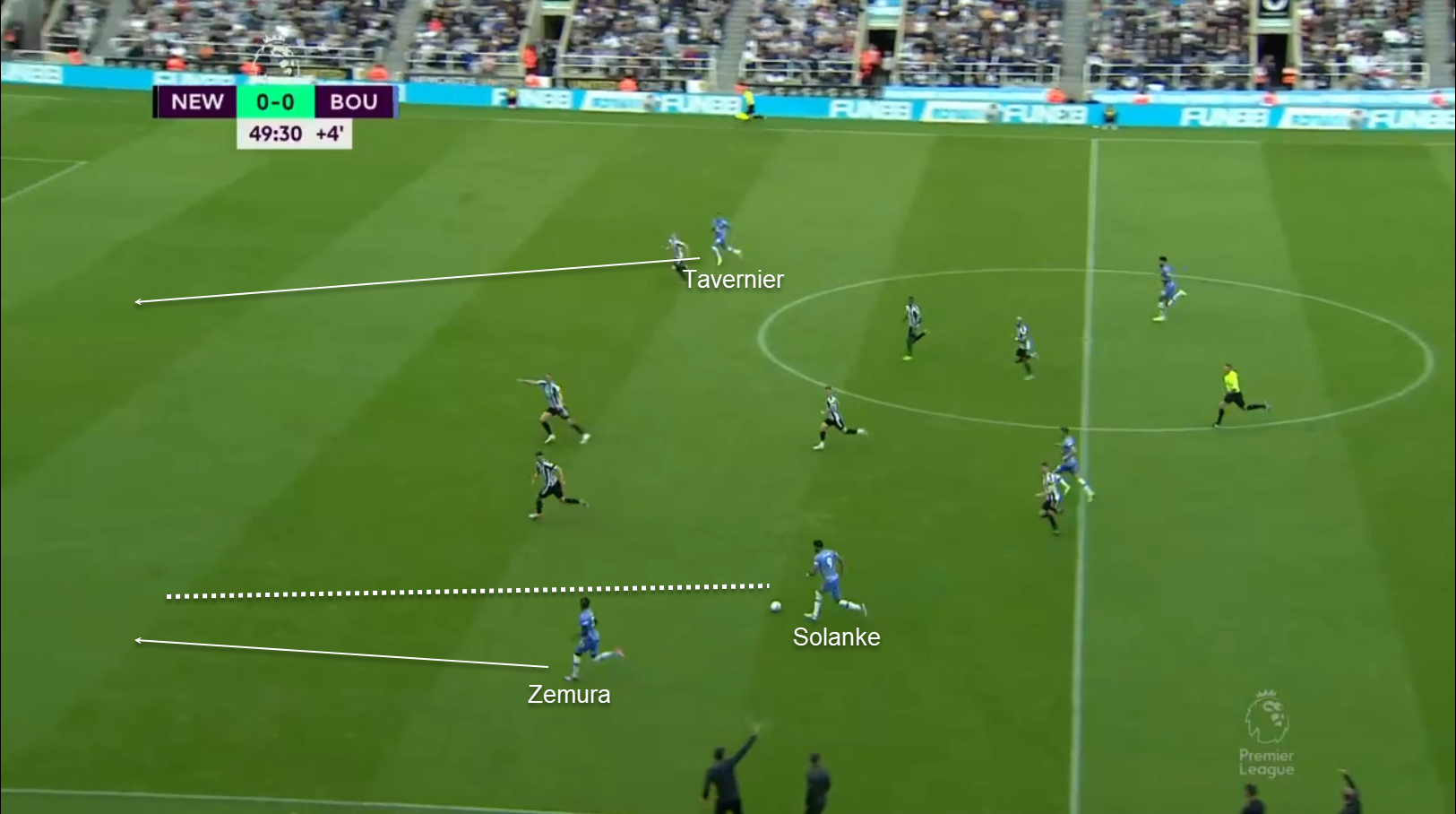 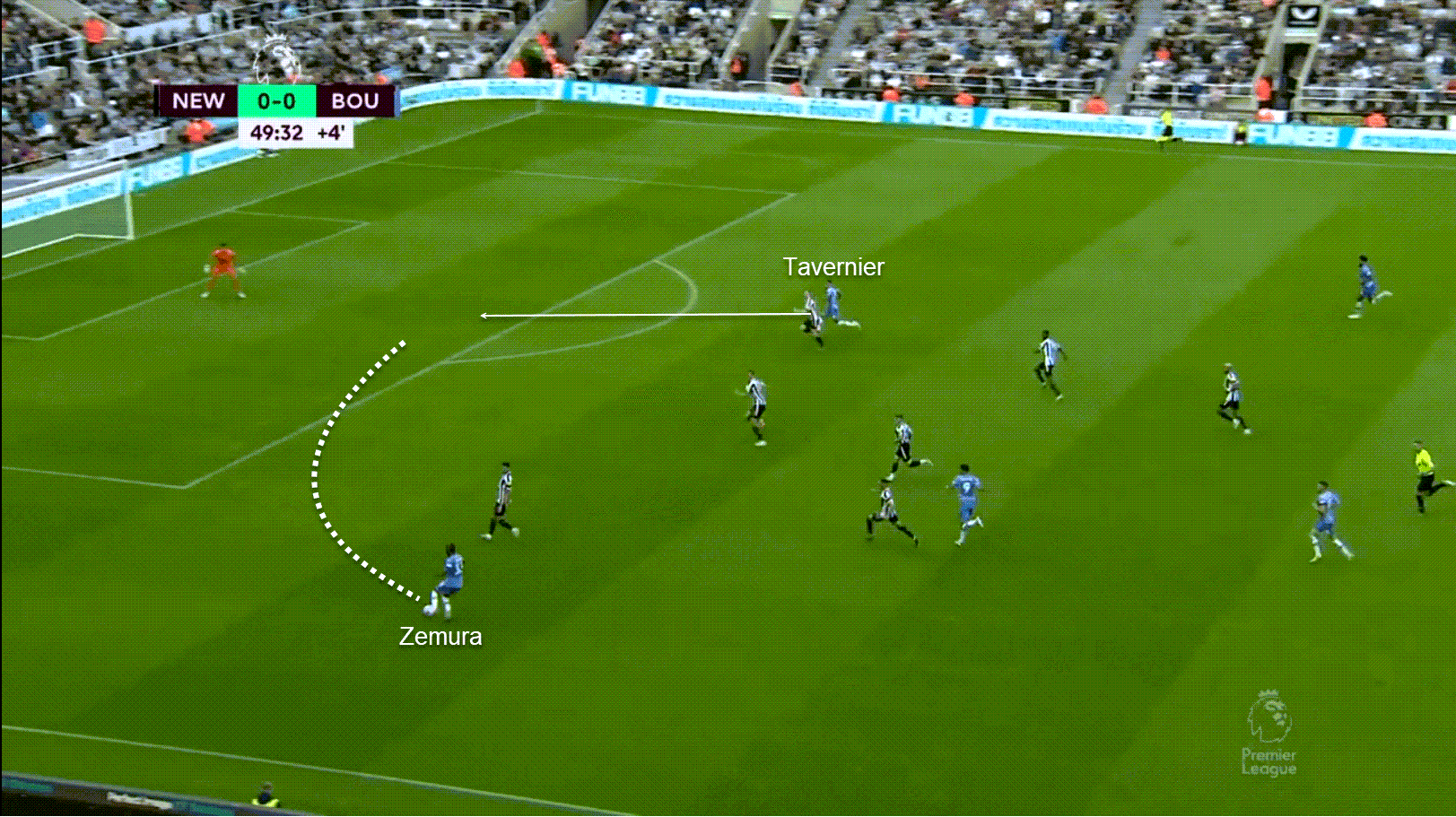 Bournemouth’s goal was scored in a similar fashion when taking advantage of Matt Targett losing possession when failing to find Isak in the box, with Mepham clearing to Tavernier who carried the ball into Newcastle’s half without much resistance. From there, Bournemouth could charge forward and probe the left side, where Zemura crossed for Billing who found space between the oblivious Fabian Schar and Dan Burn to put the ball past Nick Pope. 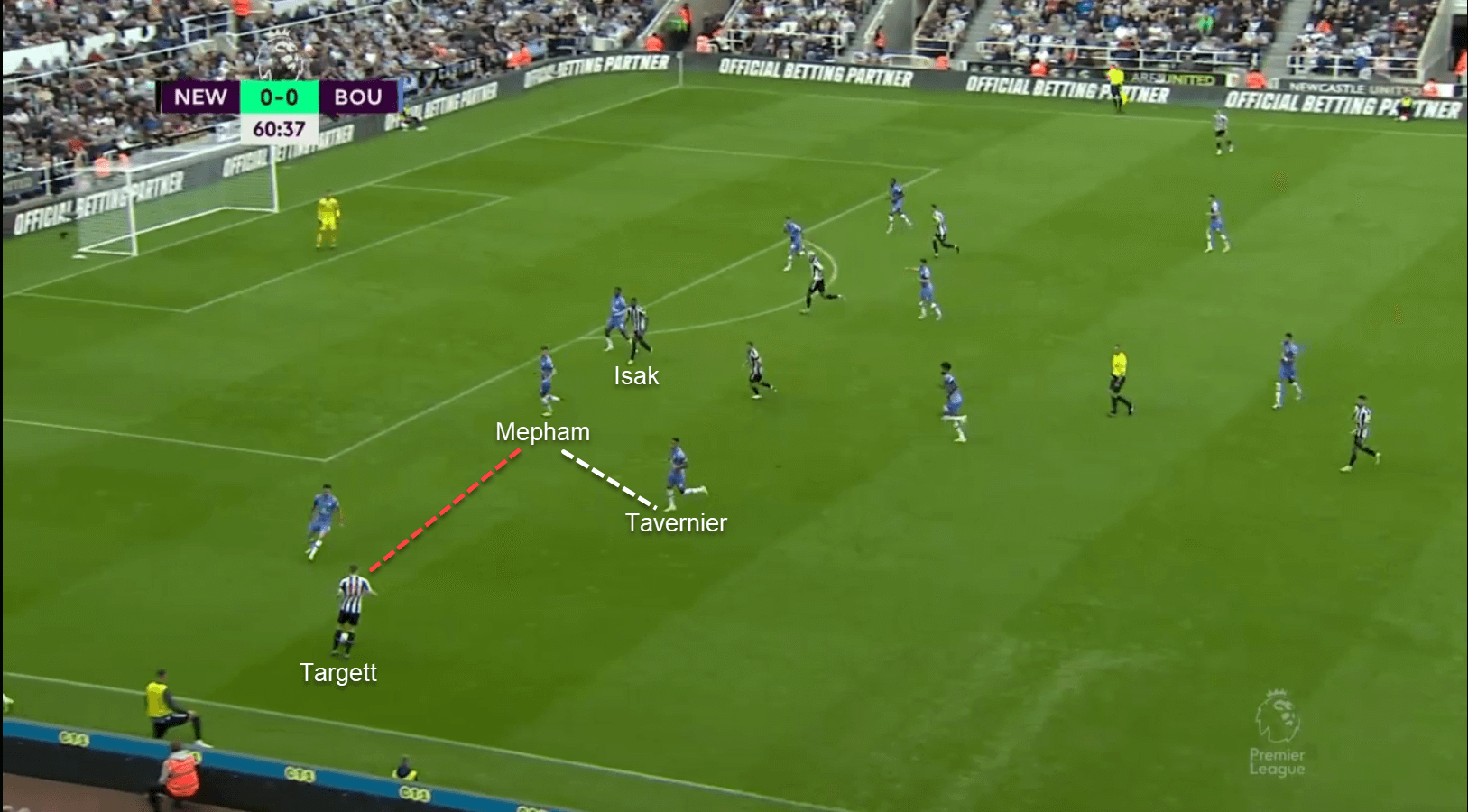 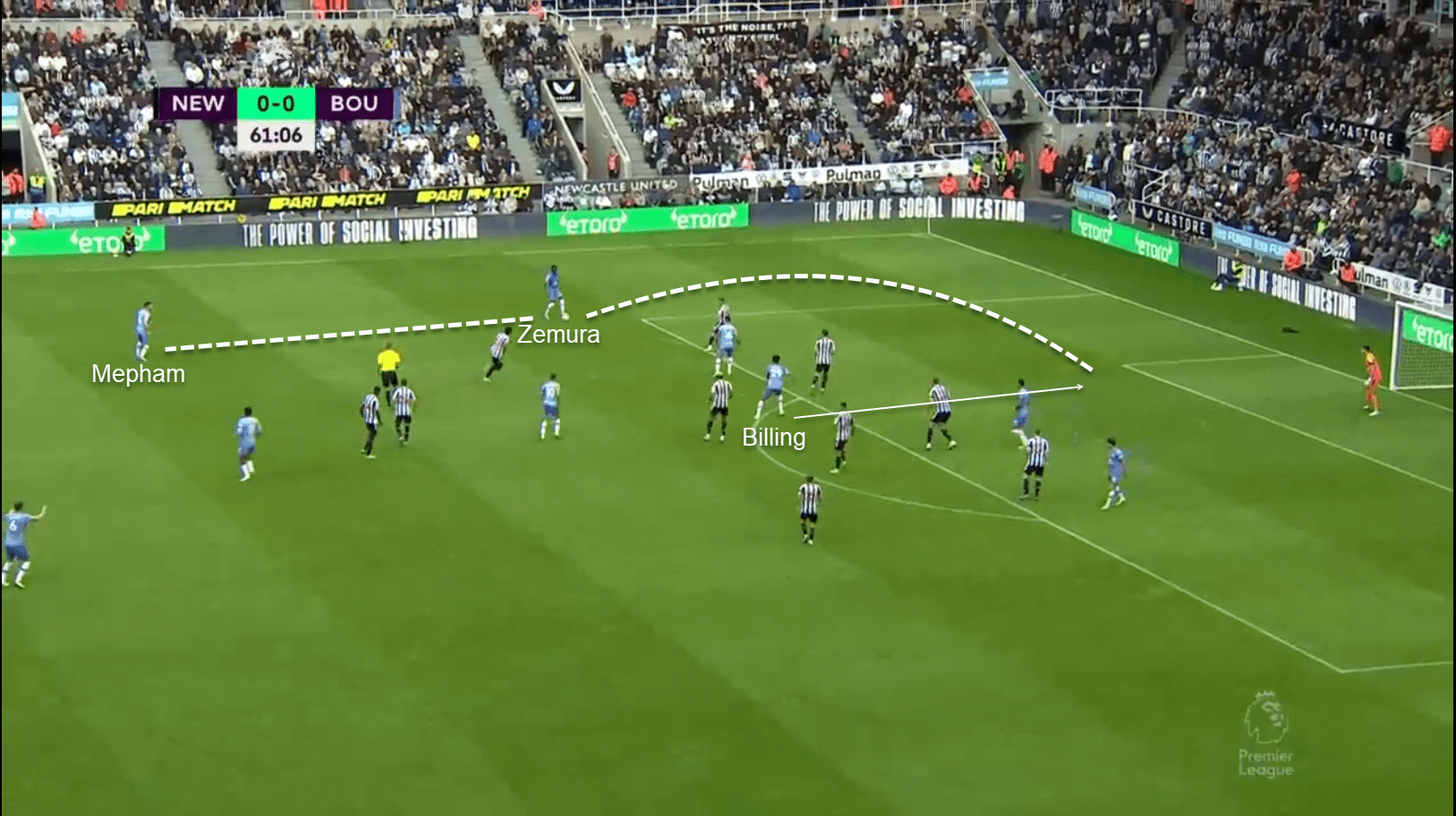 Newcastle’s equaliser came five minutes later when a cross from Trippier was handled in the box by Jefferson Lerma. Most of the 52k+ crowd missed the handball and thought Trippier was complaining that the referee had awarded a corner on the wrong side of the pitch. BBC commentator Guy Mowbray tellingly pointed out on Match of the Day that it must be “a strange feeling for Newcastle supporters: a VAR decision went their way”, obviously making reference to the last home game to Crystal Palace where a goal was wrongly disallowed for a ‘foul’ on the Palace keeper. You could argue that, had the Newcastle fans seen the handball, they wouldn’t have expected a penalty to be awarded in their favour anyway, but Isak converted from the spot to spare the magpies’ blushes.

Besides Isak’s leveller, he often looked ineffective: rarely given the service he prefers, Newcastle opted to float crosses into the box rather than play them to his feet, which seems to be his biggest strength. Despite drifting wide in his last game against Palace, Isak was much more central and pressed up against the Bournemouth back four, leaving little space to make runs and little time to hold up the ball. 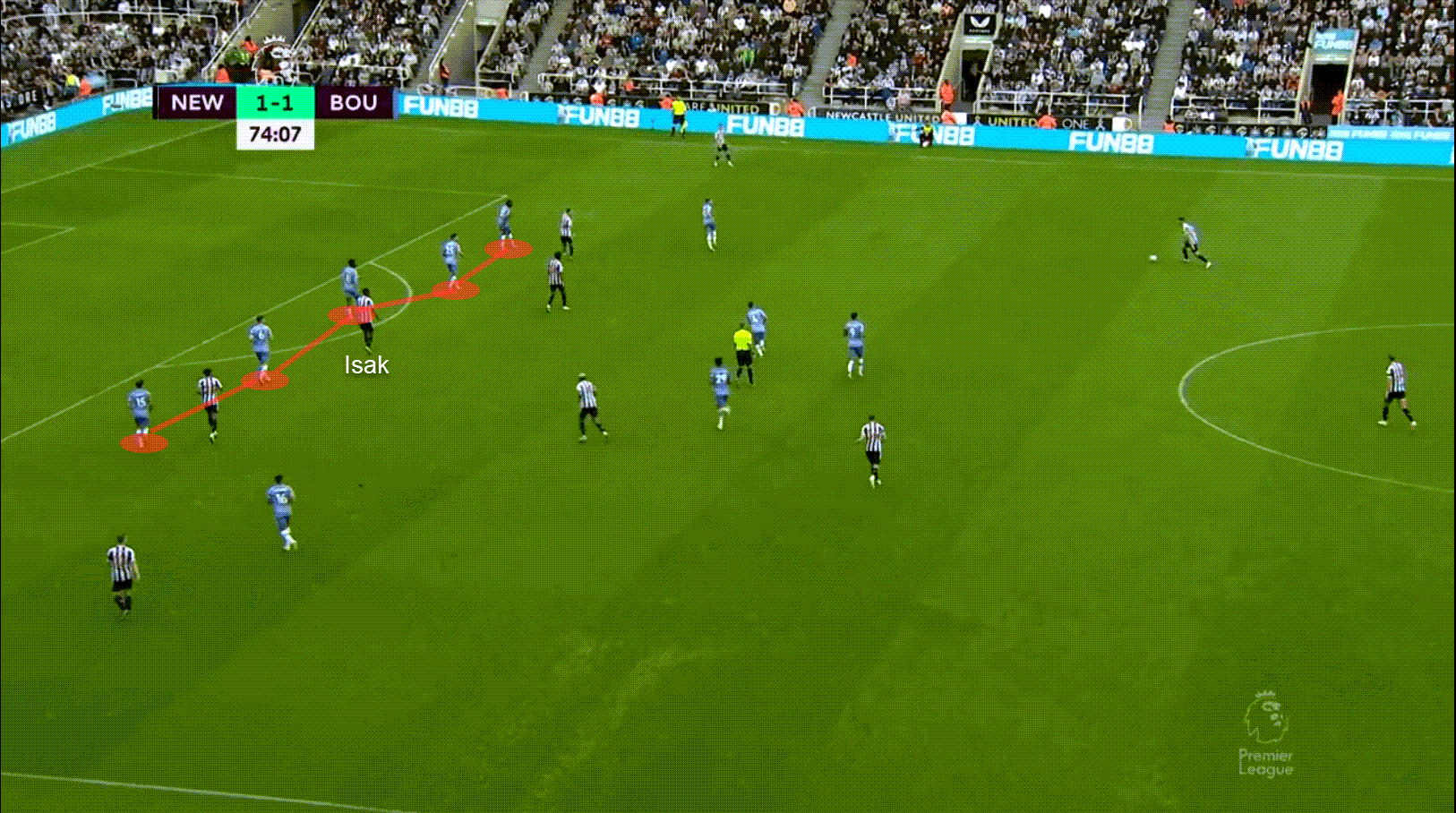 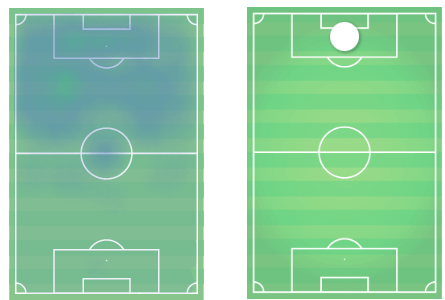 Unlike Bournemouth’s Solanke, Isak rarely dropped deep to get the ball

Isak has already scored 2 goals in 3 games for Newcastle, which would normally make a striker impervious to criticism, but given that he looks less than comfortable asserting his dominance and using one of his natural abilities, i.e. his height, it may take him a little while to develop that side of his game, especially at the age of 22.

Having previously been managed by Eddie Howe, Bournemouth would have known what to expect when facing Newcastle. Their game plan was well executed and they looked like a well-drilled side in both attack and defence. After the match, Howe observed that his side “were not clinical enough” and admitted missing Saint-Maximin who “brings gifts to the team that, on a day like today, you’re crying out for”.

Newcastle looked one-dimensional in attack and bereft of ideas without the input of their French wonder winger – who made 150 successful dribbles last season (twice as many as Wilfried Zaha) and 50 key passes – as well as the killer balls that Shelvey is often capable of. Isak’s lack of aggression and bravery in the box, seen in his total lack of aerial threat, and his minimal off-the-ball movement highlighted how much they miss Wilson’s clinical nature and his ability to always be in the right place at the right time.

The fact that Newcastle fans were even disappointed by the absence of youngster Elliot Anderson – who impressed as an impact sub against Crystal Palace with 22 touches and 1 clear-cut chance made in only 20 minutes of play – tells you all you need to know about Newcastle’s lack of strength in depth. 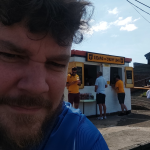