Many people think of Tobin Heath and Christen Press as the pillars of Manchester United Women’s attack in the FAWSL this season, and that is partly true. Yet, the roles and impact of Ella Toone, Jackie Groenen and especially Kirsty Hanson are often overlooked, with the Scottish international not receiving the credit she deserves for her performances in the last few seasons.

The analysis will begin by identifying her role in the team, her positions in the team’s formation and the missions she is often asked to do both when in possession and when out of possession, then there will be a closer look at her attacking strengths and defensive contribution as well.

Role and positions at Manchester United

Kirsty Hanson has got an important role in Casey Stoney’s tactics; she is often employed as a right winger who helps defensively and supports the attacks as well through her runs down the right-wing, her crosses and at times her assists as well. Her physical strength allows her to have an advantage over her markers most of the time. Moreover, her ability to play with both feet makes her a very useful player to any team, and that’s why she finds no issues in playing on both wings.

Also, Hanson averages 9 dribbles approximately per match, which is the second-highest in the league behind Lauren James, with a success rate of 51.9 %. This highlights the number of times Hanson has been able to dribble successfully, and how she is usually able to bypass her opponents. She mainly relies on her physical strength in doing so, as well as her technical skills. As we can see from the Scotland international’s heatmap, she is able to play on the left wing as well, and she has done so in numerous matches for Manchester United. 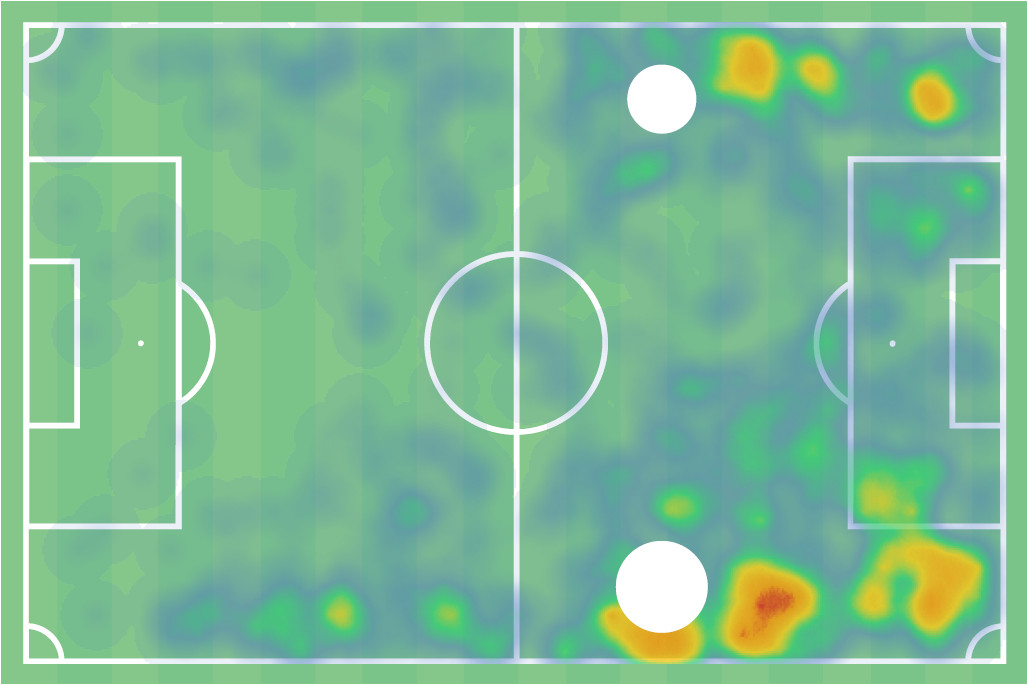 This heatmap shows how Hanson usually plays the right and prefers to go on the outside more than cutting inside even though she is good with both feet. In fact, playing in this position has allowed her to create a lot of chances for her teammates who usually wait inside the box, since they know that Hanson is usually able to go past her opponents and deliver an accurate cross into the box. Being able to pass accurately with both feet has allowed her to have no problems when playing on either wing. 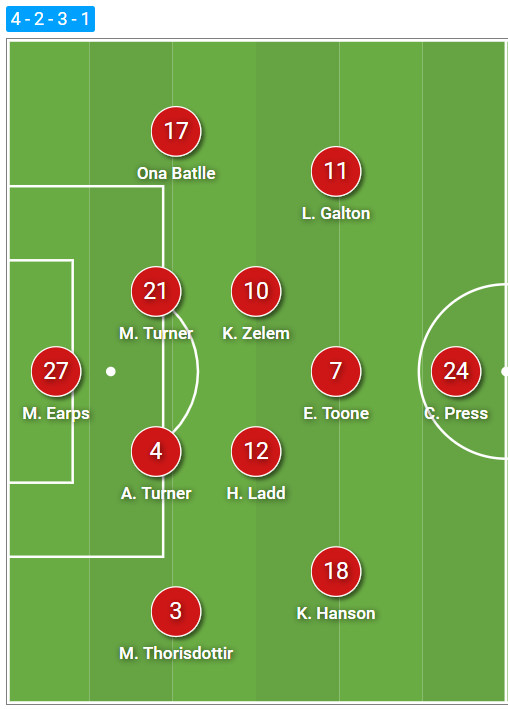 Even though Hanson has only made seven starts in her 14 appearances, she has been able to always have an impact on the game even when she has played a half or less. In Stoney’s 4-2-3-1, she has put on a number of consistent performances that have made her an option to play on the left or the right,  competing with Leah Galton, Ella Toone and Jackie Groenen for a starting spot. In fact, she has also been used as a striker at times as well when Manchester United have needed her in that role. That is why we see her play regularly, either from the start or as a substitute, since she can fulfil multiple roles well, which has proved to be beneficial for Stoney when she has wanted to change things in certain matches.

Kirsty Hanson has scored three goals and has one assist in the FAWSL this season. It is true that these numbers are not spectacular, but this player’s impact on the team is worth analysing. In fact, whenever Hanson enters as a sub, she brings dynamism to her team’s attacking performance and helps a lot in creating concrete chances.

We have seen her making assists and through passes from the left as well as from the right wing. However, she needs to be more consistent with her passing in order to improve her impact. Her passing accuracy is 60.31%, cross accuracy is 32.43%, while she attempts 2.52 passes to the final third per 90 minutes.

Her overall passing definitely needs improvement, but she is quite good at crossing, while, given the relatively few minutes she has played, averaging 2.52 passes per 90 into the final third is quite impressive. 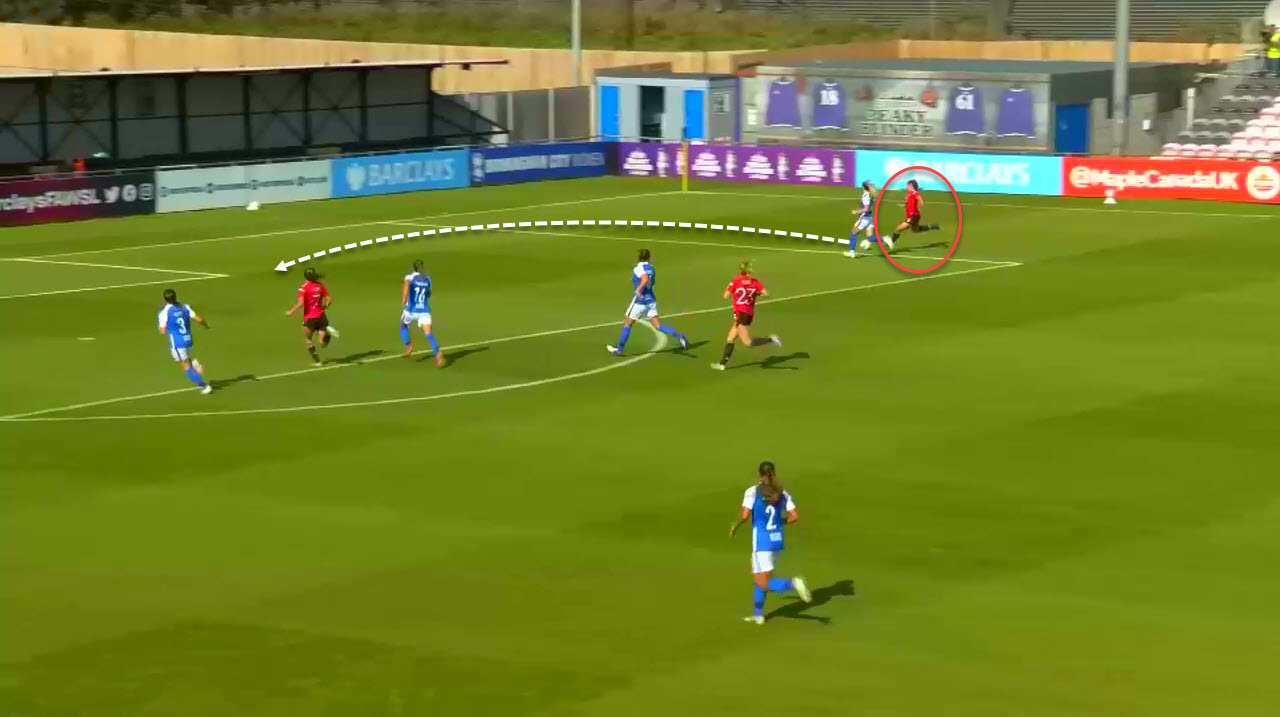 In these two images, you can see how effective Hanson can be on the right wing by getting away from her markers and crossing accurately to her teammates inside the box. These two chances show two assists from Hanson, thanks to her accurate crosses and to players like Toone and Galton who got on the end of those crosses to score. 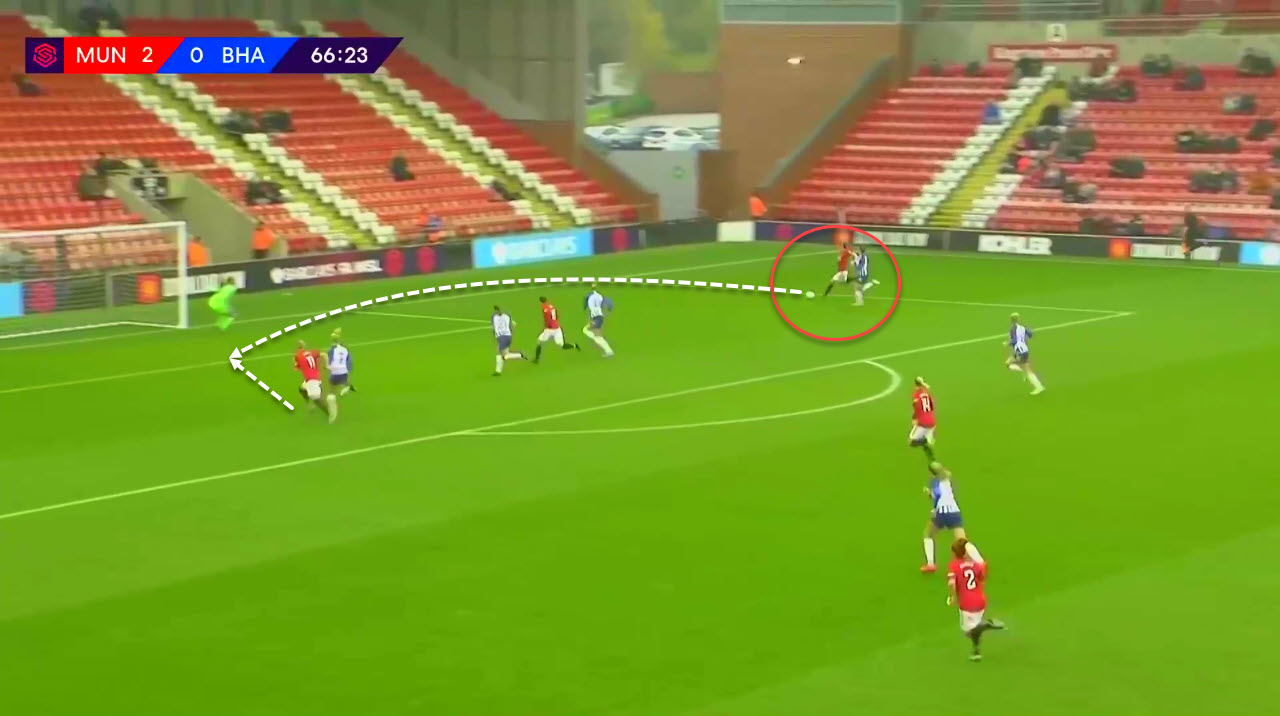 Moreover, Hanson is also efficient when she is employed on the left wing, from where she is able to cut inside and cross, or make passing combinations with her teammates on the wing. However, she needs to get some more playing time and exploit that time by showing her playmaking abilities to secure a regular starting spot and prove her worth even more to Casey Stoney.

That will not be easy for the Scottish player since there is a lot of competition between her and her teammates for those attacking spots in the XI. Nevertheless, we can see in the next image how with a single pass Hanson was able to break down Manchester City’s defence and put Christen Press in a one-on-one situation with the goalkeeper. This shows the impact she can have playing off the left as well. 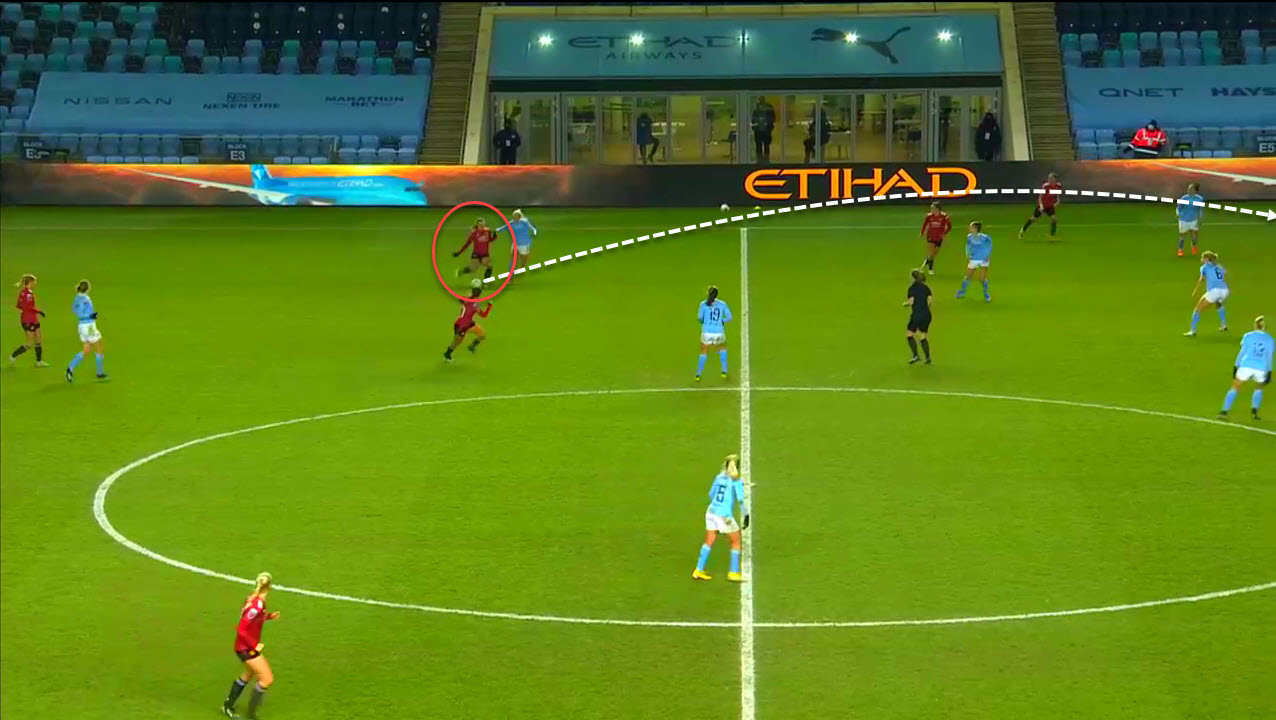 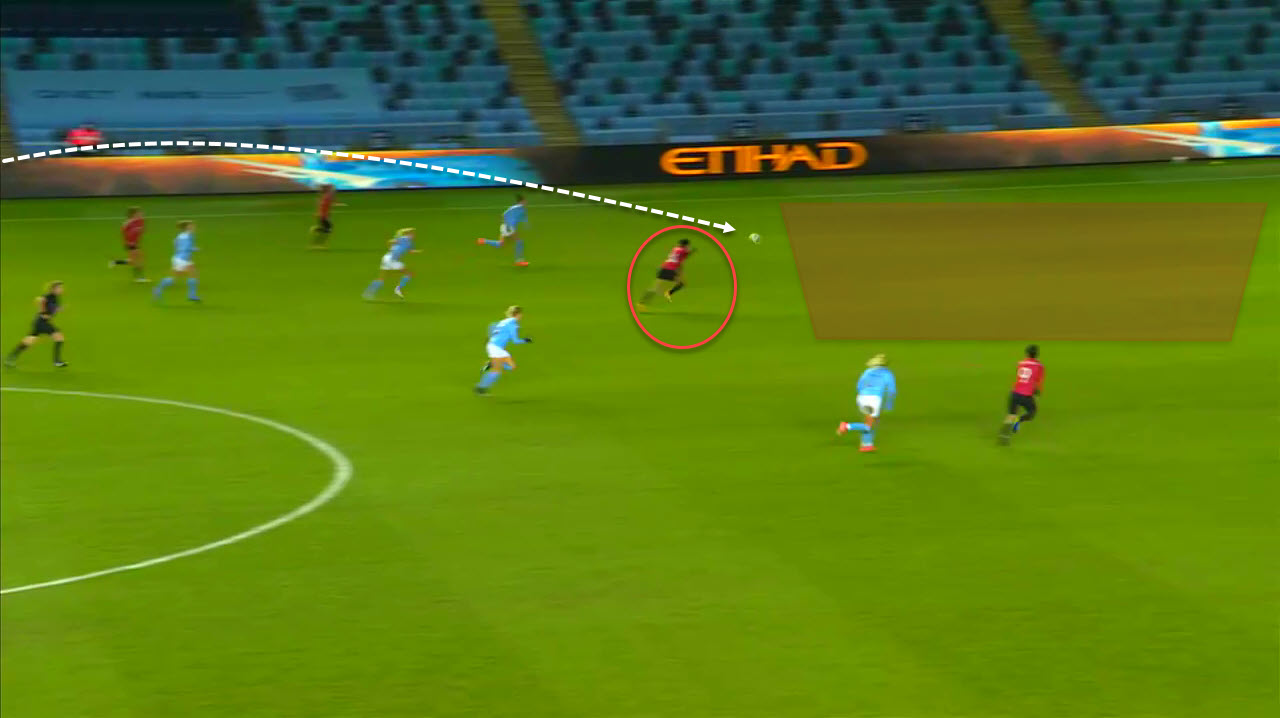 Hanson averages 4.67 crosses per 90 with an accuracy average of 32.43%. This is a very good accuracy rate that reflects her playmaking skills. Therefore, with some more concentration and chemistry between her and her attacking teammates, she can have even more consistency in her performances, which will only come with more minutes on the pitch.

Apart from her passing and dribbling skills, Hanson can also score goals, having done so on several occasions for her national team and for Manchester United as well. She takes 1.77 shots per 90 on average, with an xG/shot of 0.16. While she may not be taking too many shots, her xG/shot numbers indicate that she is getting into decent positions before shooting, which is a very welcome sign. With the likes of Press, Heath, Toone, James and Russo all in and around the XI, it is no surprise that Hanson is not taking too many shots, as those players would usually be the ones getting on the end of passes and crosses in the penalty area.

Nevertheless, Hanson has scored three goals this season, giving her an average of 0.38 goals per 90, with those goals coming from an xG total of 2.29. This is encouraging, as it suggests that Hanson is a good finisher, and therefore should probably get more opportunities in the side to showcase her abilities.

Hanson’s tactical awareness allows her to anticipate her markers’ movements and move quickly without the ball to receive it in excellent positions. This makes Hanson a very intelligent player. In other words, Hanson moves a lot without the ball and knows how to position herself when she happens to be near the box. Along with her physical strength, this gives her the chance to win in offensive duels with her markers and get to shoot and ultimately score goals.

Hanson is involved in 15.53 offensive duels per 90, winning 36.59% of them. This can be improved as well, but in the FAWSL, not many players have a higher success rate. Hanson is tenth in terms of the number of offensive duels per 90, with Lauren James being the first in the league with 22.1 duels per match and a success rate of 43.48%. Therefore, Hanson’s numbers are actually quite good, but they can be improved in the future as well.

As we can see in this example, Hanson was able to anticipate her marker’s movement and gain space by running in the direction of her teammate’s cross, to then take two steps backwards and confuse her marker to score a beautiful header. 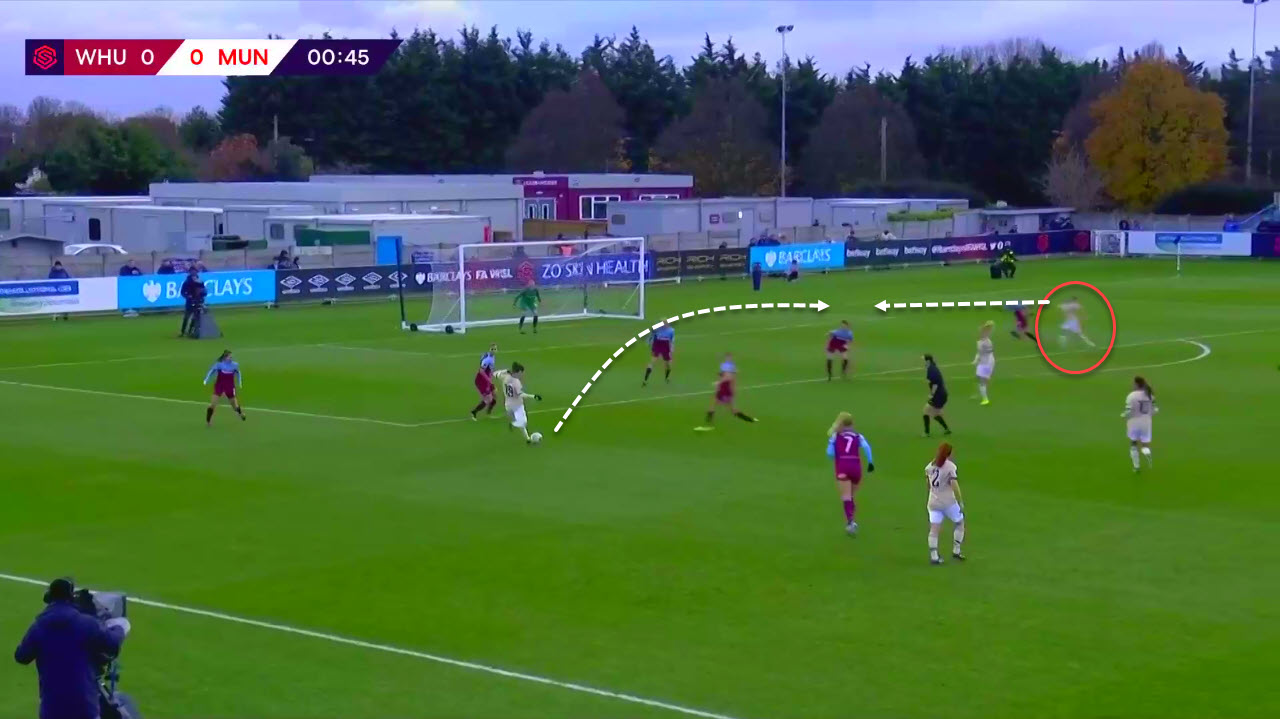 Moreover, Hanson can also be clinical in front of goal when she gets an opportunity. She was able to score half-volleys and has therefore shown her finishing ability several times, as you can see in this example in which she scored a difficult goal with her left foot when the ball was in the air. 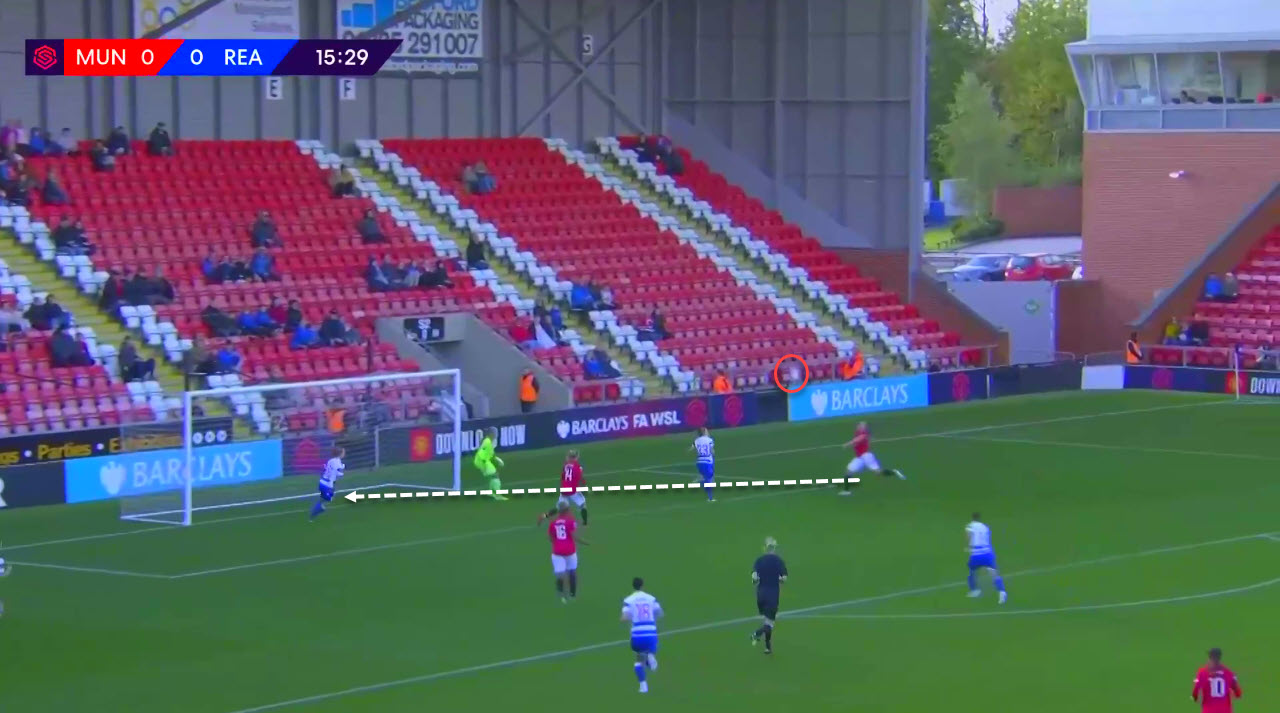 In terms of helping her team recover the ball and preventing opponents from attacking and building up from the back, Hanson can play a crucial role. In fact, Hanson makes an average of 2.52 recoveries in the final third per 90 minutes, with Lauren Hemp as the highest in the league with 3.14 recoveries per 90. Moreover, Hanson also makes 3.03 counterpressing recoveries per 90, which is very important because successful counterpressing often allows the team to recover the ball in favourable situations that can lead to goalscoring opportunities. This shows Hanson’s efficiency and effort when the team is out of possession.

The action map shows how Hanson’s interceptions are mostly made in the final third or on the right wing, and this is very beneficial for the team in terms of chance creation.

Here is an example that shows how Hanson can be efficient in intercepting the ball and winning duels thanks to her physical strength. Interceptions like these allow the whole team to create chances out of nothing – here, Hanson passes to her closest teammate and runs towards the free space left by the defender to receive the ball and cross. 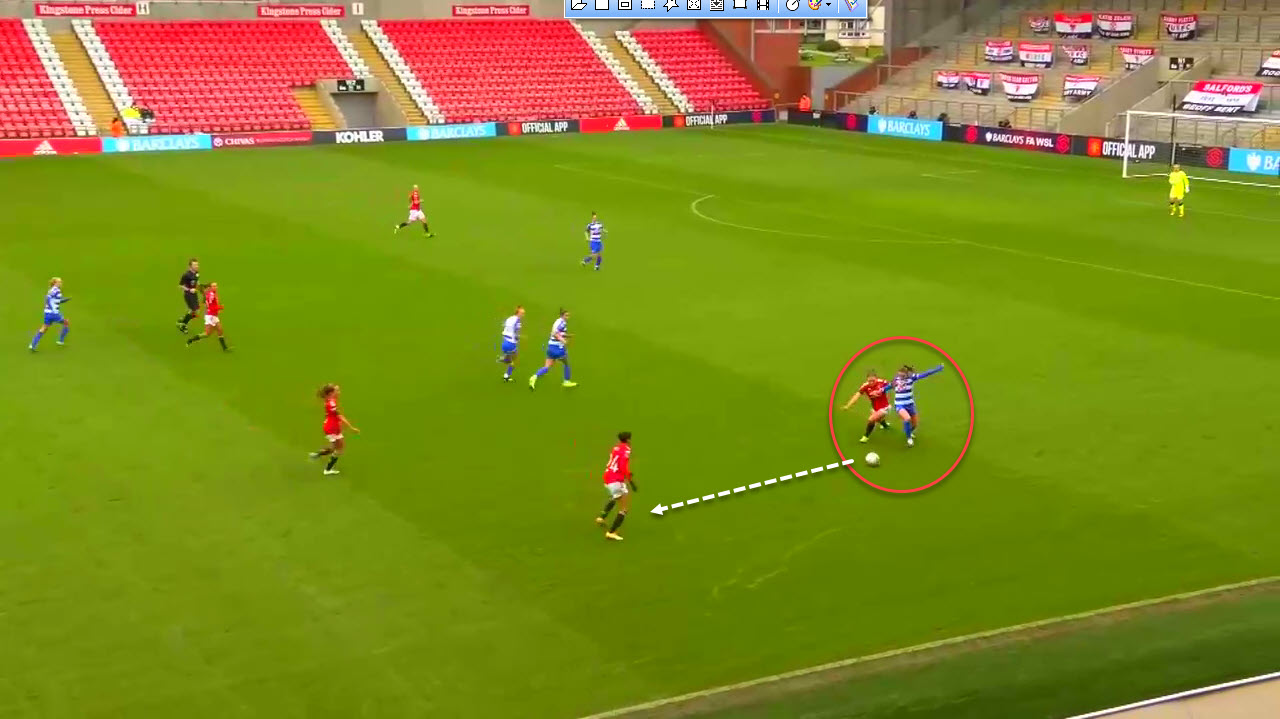 Kirsty Hanson is now 22 years old, but she has all the abilities that will allow her to shine in the next few years if she gets regular playing time with her team. With a little bit of added concentration, Hanson has the potential to be considered among the best wingers in the FAWSL and she can be decisive in the coming years for Manchester United Women. In this analysis we have tried to shed some light on this player by showing her main characteristics by relying on data and match footage, since she has perhaps not been receiving the credit she deserves for her excellent performances in the last couple of seasons.