Scoring a lot of goals has always been an integral part of Sergio Lobera’s teams, and this is the case with Mumbai City FC as well. Mumbai City have scored 35 goals in the Indian Super League (ISL) so far (at the time of writing), which is the highest in the league. Credit for this must go to the manager, as well as the players, who have fired the Islanders to the ISL final, and have also sealed a spot in the AFC Champions League.

An important part of the team’s attacking structure has been Bipin Singh, who has had a big impact for the team so far. In this tactical analysis piece, we will be performing an analysis on Bipin Singh who is one of the hottest Indian prospects at the moment. We will also use data to look at his performance in the league and highlight the reasons for his performance this season.

We will be considering players who have only played more than 200 minutes in the league this season for our comparisons, with Singh being highlighted in red for easy identification. This methodology is applicable to all the visualisations in this piece. 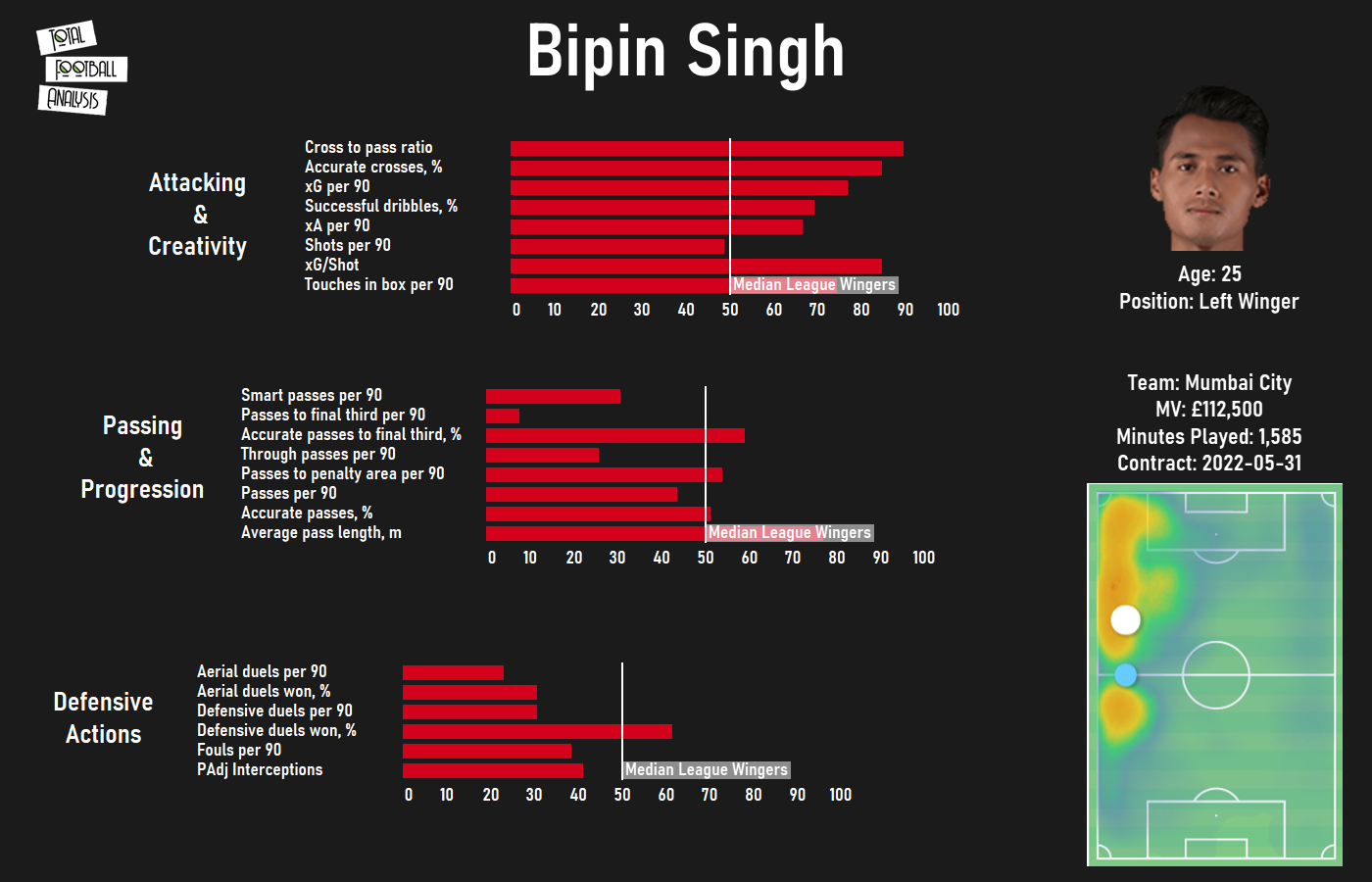 Bipin Singh, the 25-year-old winger/attacking midfielder stands at 172cm tall and is a physically imposing player, who plays on the left half of the pitch. Looking at his player profile, we can see that he has been performing extremely well in various attacking metrics. He has nine goal-contributions this season, which is the highest for an Indian player. His speed and ability to read situations have been his greatest assets, while he is comfortable at playing with both feet, which makes it difficult for defenders to judge the direction in which he will dribble when running at them.

He also plays a vital role in the team’s defensive phase and can always be found in the defending third supporting the left-back when needed, closing gaps and giving the balance that the team needs. Although his number suggests that he has been performing below the league average among other wingers on defensive metrics, we will analyse his impact on Mumbai City’s defensive performances through in-game examples later in this piece.

Analysis of his attacking ability 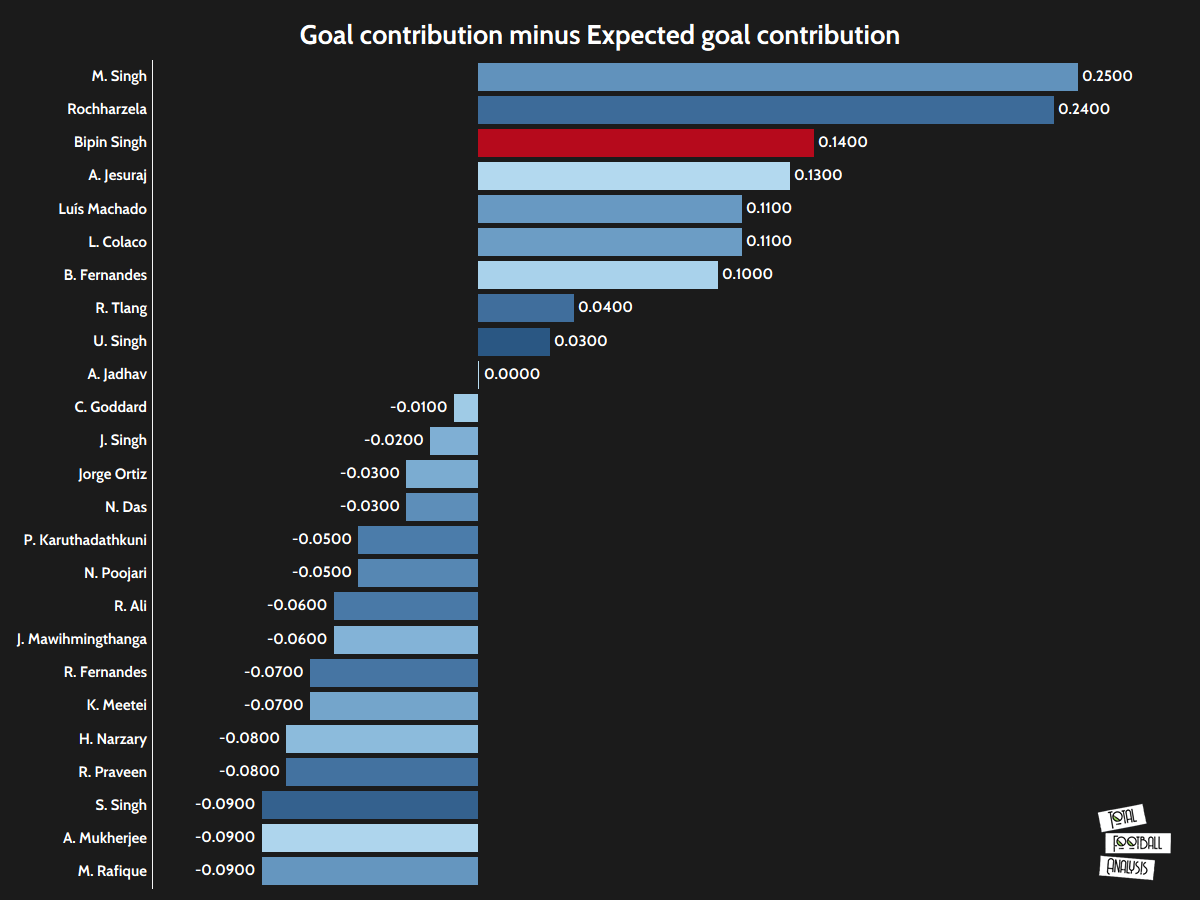 Looking at the bar graph, we can see that Bipin ranks third among all other wingers in the league for xGDifference/90, with a positive difference of 0.14 which explains his success in the league this season.

While on the left flank, Bipin’s preferred way to beat a defender is to push the ball into space and run. However, he is also capable of dribbling with the ball at his feet. Since he is comfortable at playing the ball with both his feet, it is difficult for defenders to predict the direction in which he is going, and often teams have had to double up on him to win the ball back. 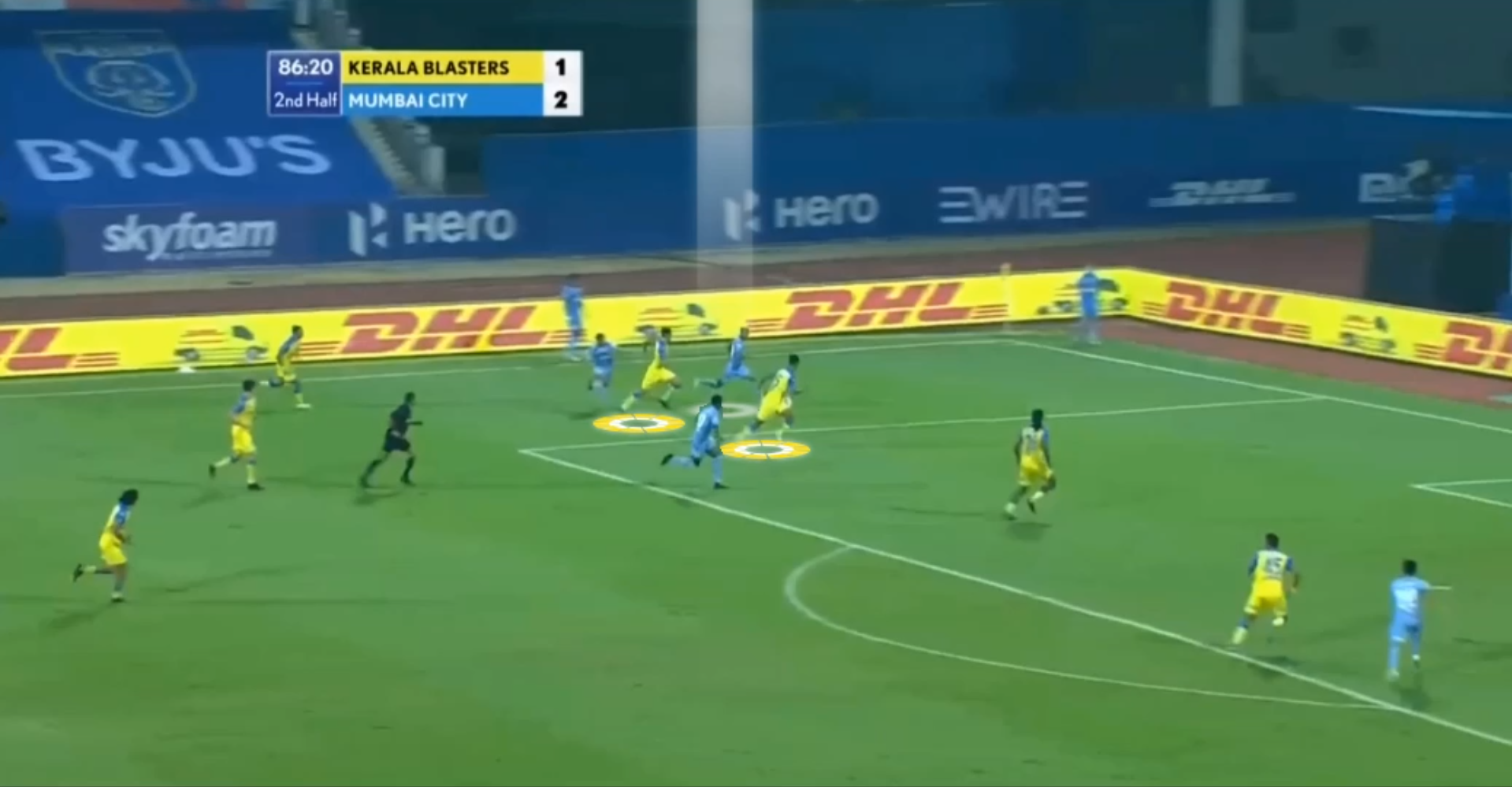 This ability helps in drawing players towards him which results in opening up space for his teammates to exploit. We can see this in the previous example, where two defenders are trying to close him down as he carries the ball which helps the player behind the defender to stay unmarked in the penalty area.

Diving further into his attacking ability we shall now analyse the quality of his shots once inside the penalty area and the frequency of his shooting. 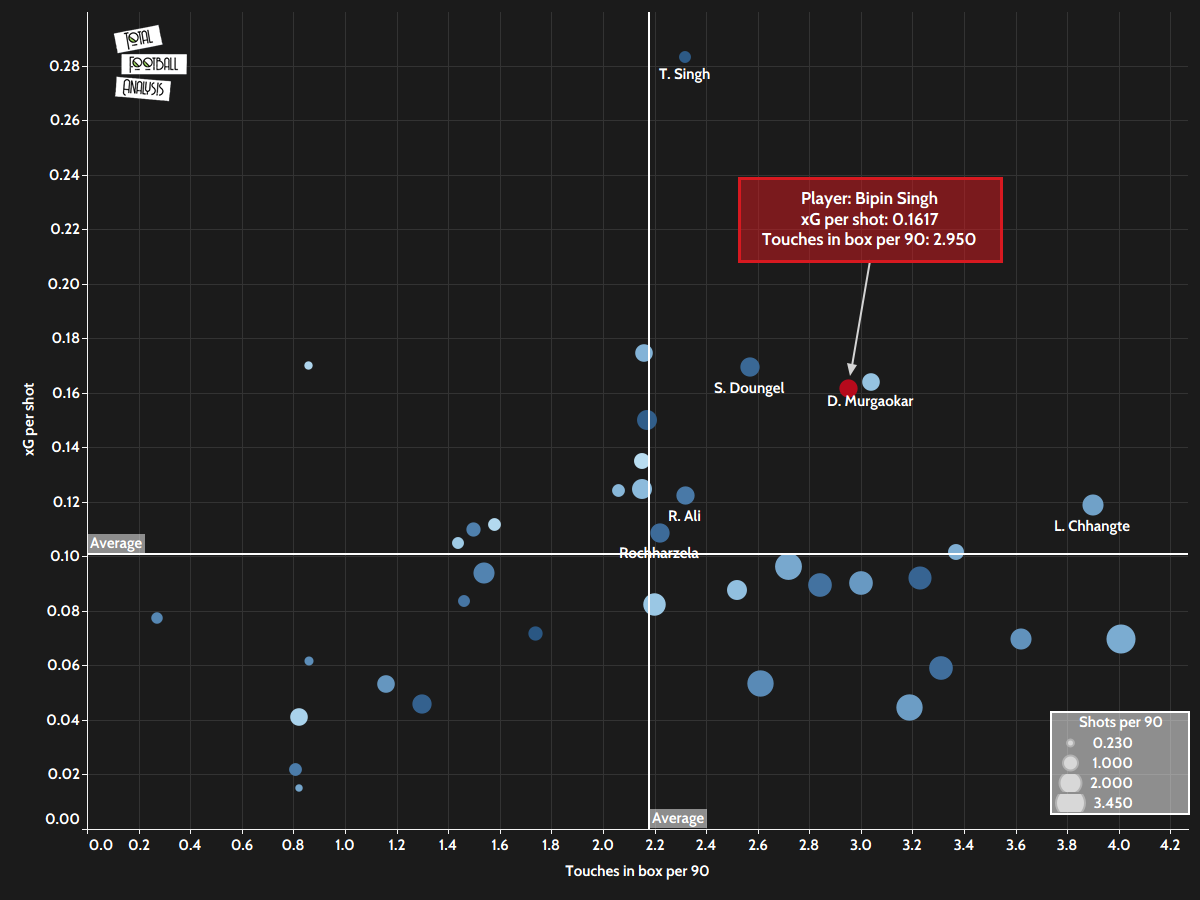 In this scatter plot, the size of each dot indicates the number of shots per 90. Very few players are in the top-right quadrant, which indicates players who are above-average for both metrics (xG/shot and touches in the box per 90), with Singh being one of them. He averages 0.16 xG per shot, with 2.95 touches in the penalty box per 90. Further, he has averaged 1.31 shots per 90 – all of these numbers point toward a player who is taking shots from optimal positions, as displayed by his high xG/shot value, while he is also getting into the box frequently enough. He could perhaps take a few more shots per 90, but this may lead to shooting from poorer positions.

These are a few of the traits that make him stand out from the other wingers in the league. Moving on in our analysis, we will be looking at his passing and progression ability next.

Singh is very quick, not just with his feet, but also in terms of his decision making. He has four assists to his name this season which supports the fact that he not only scores but also creates goal-scoring opportunities for his teammates. 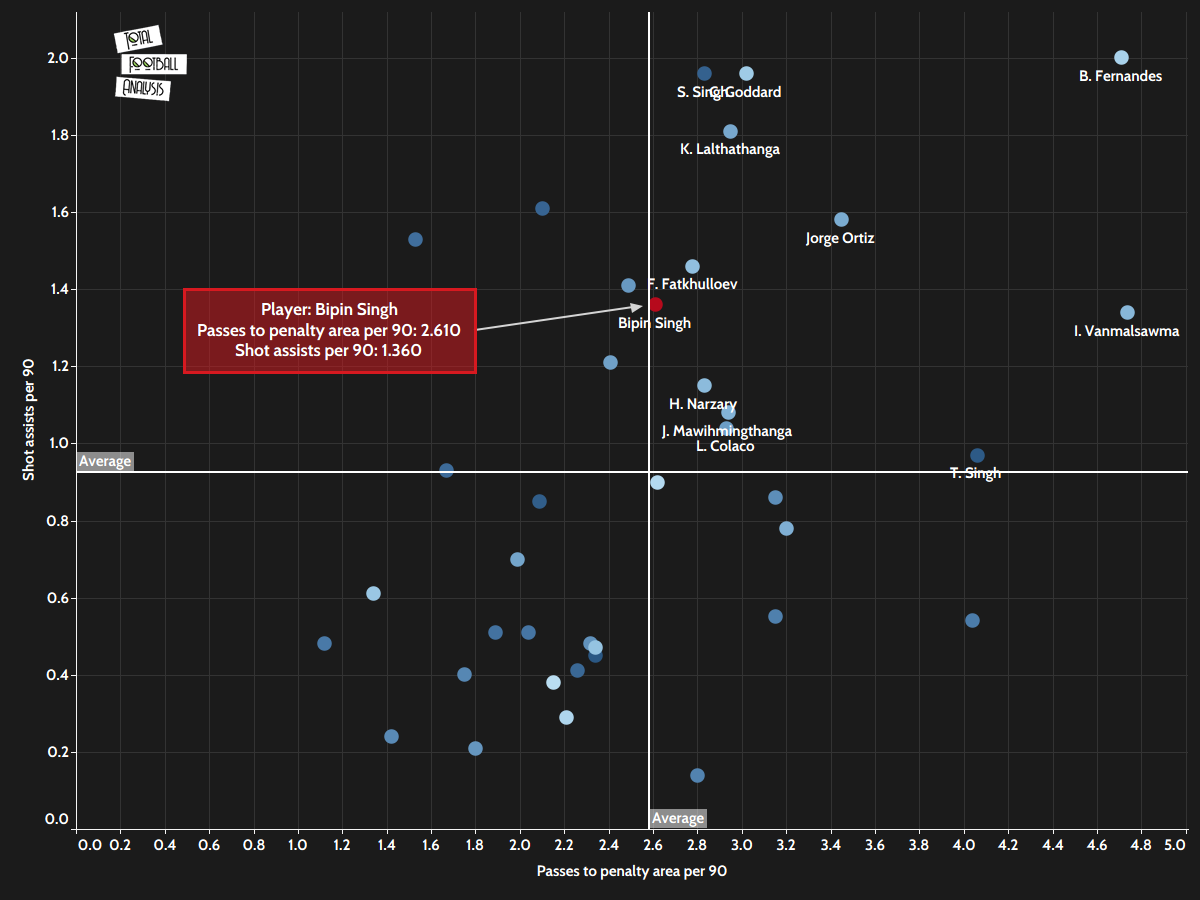 Once again we see Singh making it to the list of players who are above-average for our metrics. He is marginally above average for passes to the penalty area per 90 (2.61), while his performance for shot assists per 90 is well above average (1.36). This indicates his passing and creative ability to set teammates up in good positions.

The reason behind these numbers is his quick decision making as stated above which is further enhanced by his vision. He scans his surroundings even before receiving the ball, allowing him to make decisions on his next action and execute it well. 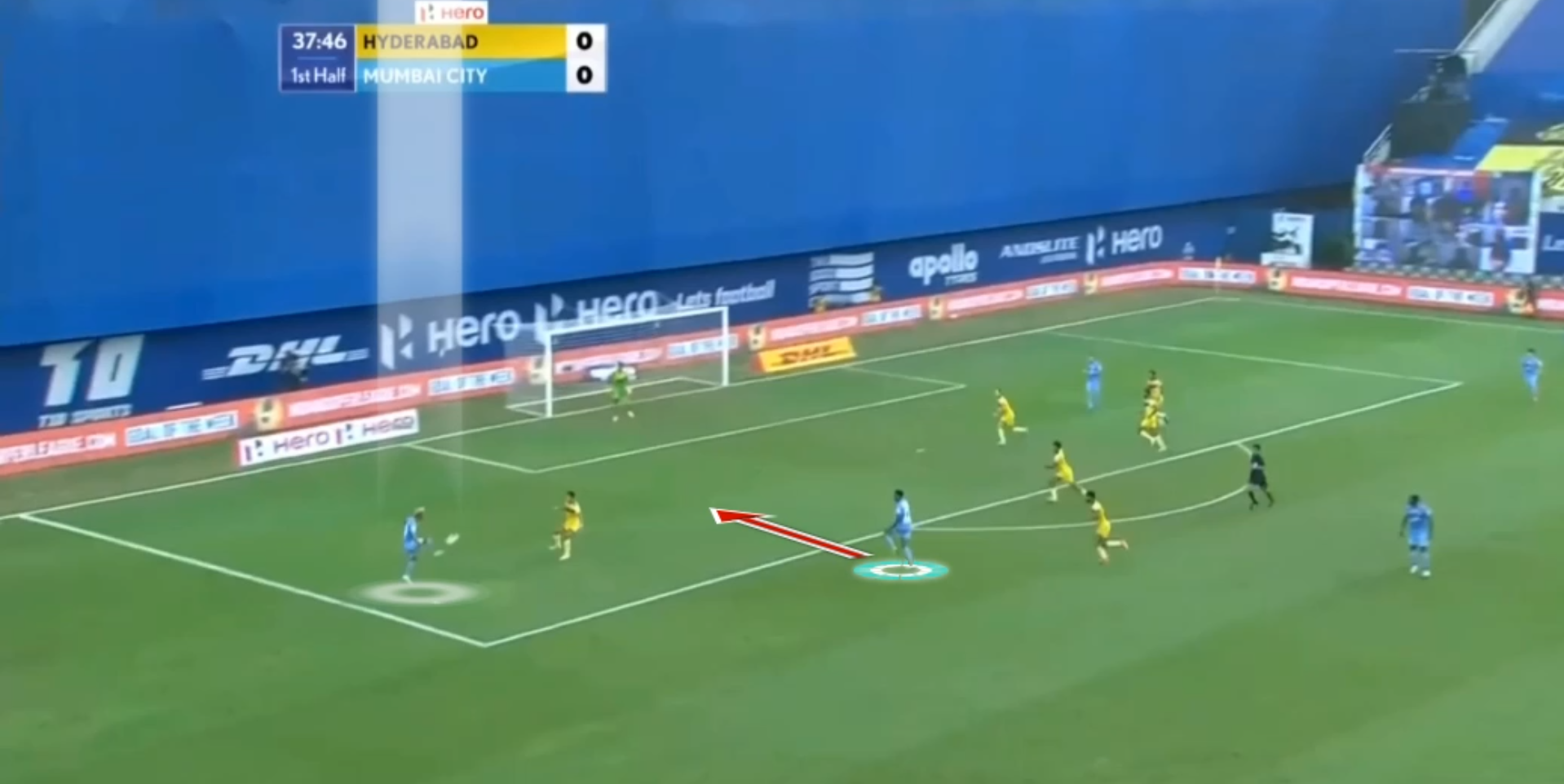 We can see how Singh is quick to spot Bartholomew Ogbeche’s run, and is able to set him up first time for a goal-scoring opportunity.

This is a standout example of our previous statement on his vision and decision-making.

He is quite threatening with his crosses as well, having averaged 3.8 crosses per 90, which is the fifth-highest in the league among wingers, with an average accuracy of 38.81% which is also well above average. Quite a lot of his runs and dribbles ends with crosses, but it is also important to take into account that he is not in a hurry to cross, but rather makes sure the cross is as threatening as possible. 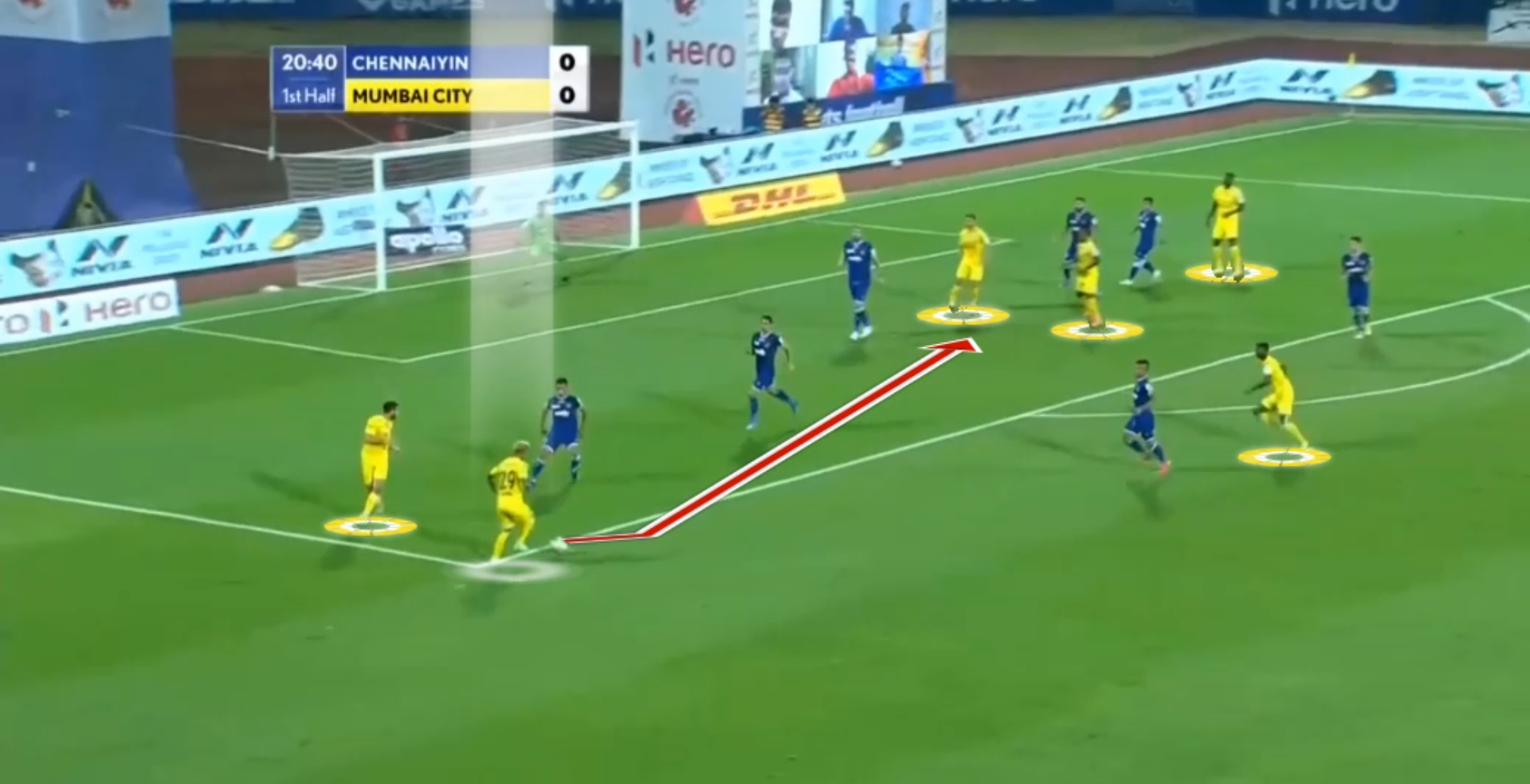 His fast footwork has helped him avoid defenders and make quality passes. In this image, we see Singh trying to avoid the man in front and cross it to his attackers. This helps him add more quality to his passes. Being comfortable with both feet helps him move in either direction as he is capable of crossing equally well with either foot, which is why duels against him are a nightmare for any defender.

The last section of this analysis will consider Singh’s defensive ability. To begin with, let’s analyse where he stands in this aspect when compared to other wingers in the league. 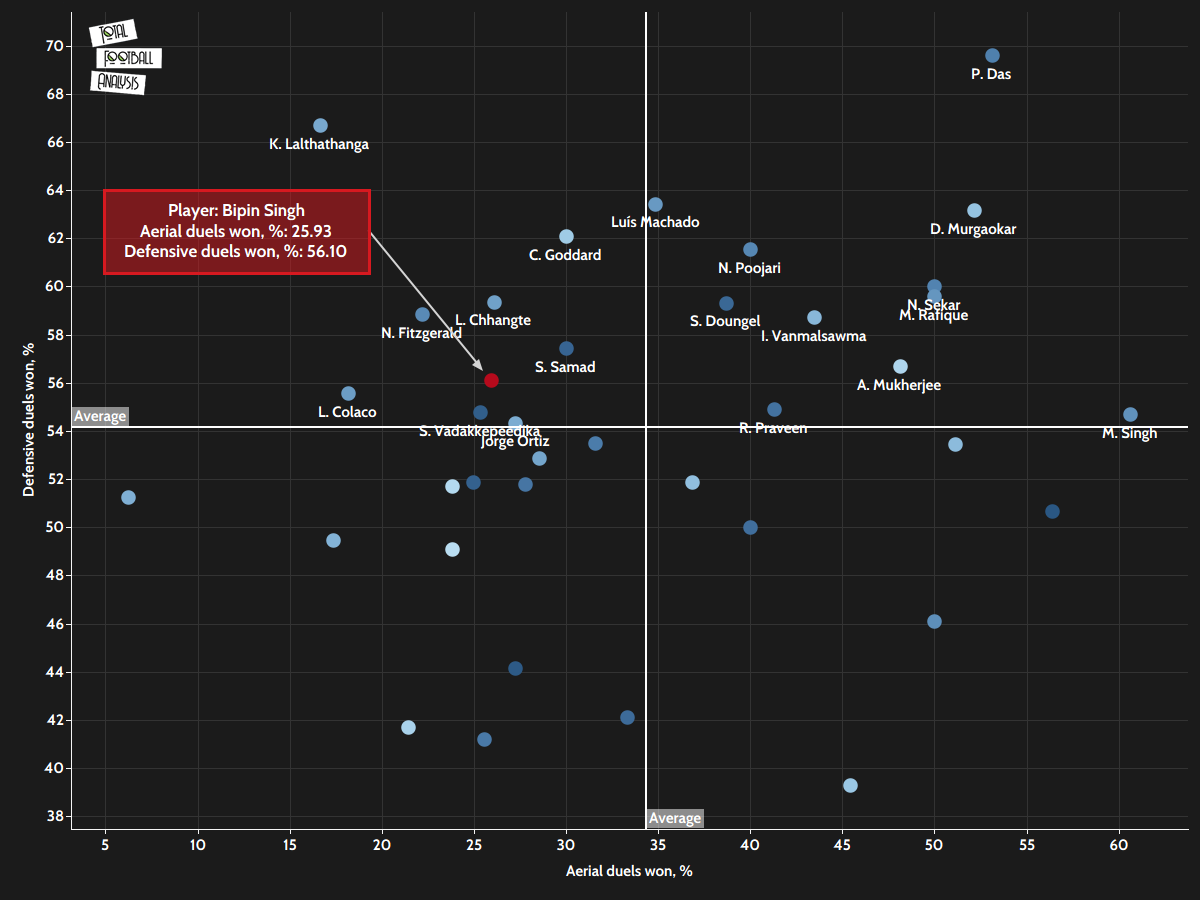 Let’s dive deeper into my statement at the beginning where I had stated that Bipin’s defensive contribution is something that cannot be measured by numbers. His awareness and positioning in the defensive phase is something that has a huge impact while defending, and these attributes do not necessarily reflect themselves in defensive statistics and metrics.

For a player who plays high up the pitch, it is really surprising to see how deep Singh comes to support his team in the defensive phase. In this example, we see that as the left-back was beaten, Singh is ready to support and balance the defence by immediately engaging in a duel without giving much time to the attacker.

His awareness and ability to read games quickly has a great influence while pressing high and closing down the opponent as well, and he is therefore able to have an impact on Mumbai City’s defensive structure at both ends of the pitch. 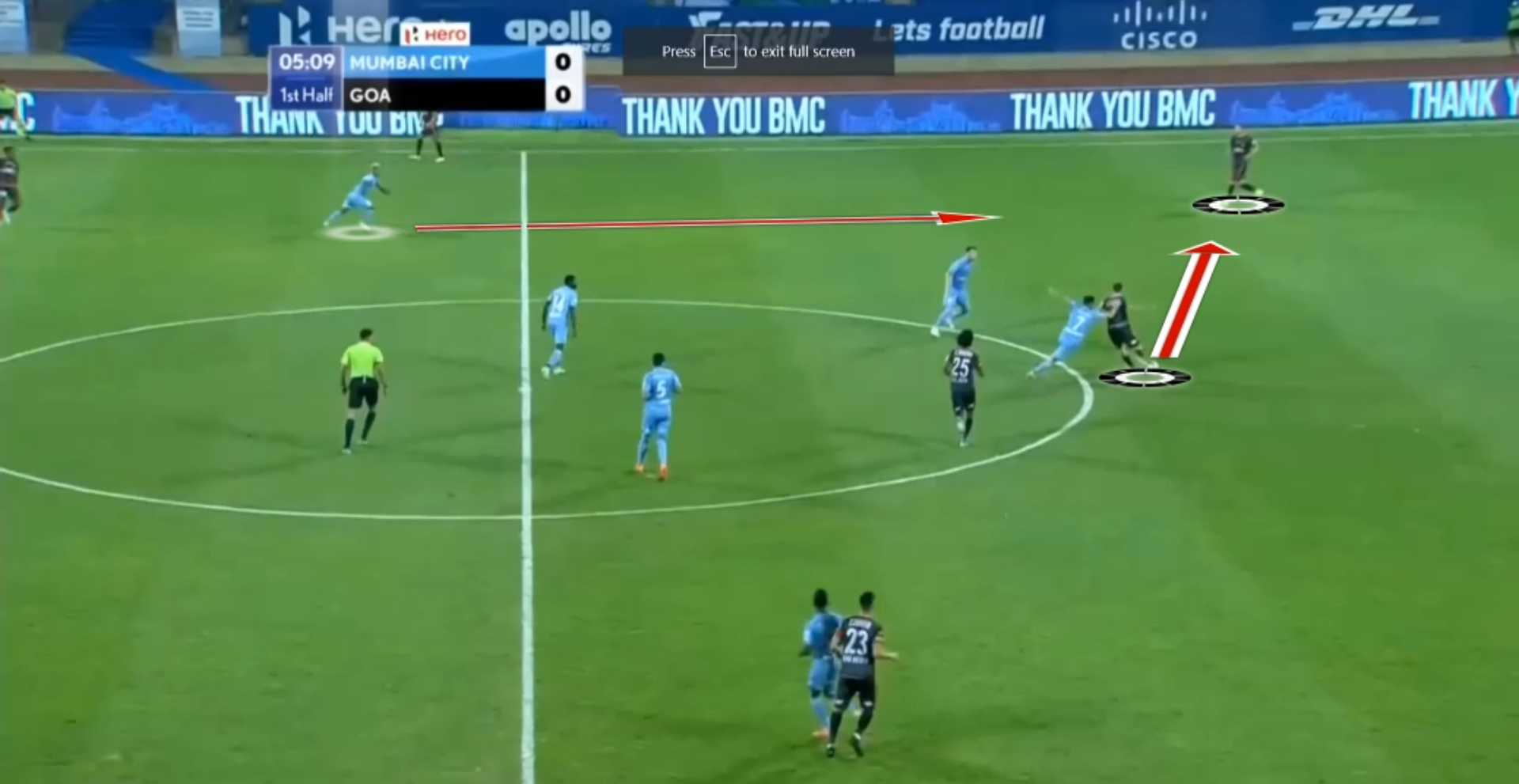 In this image, we can see that Singh has anticipated the pass and has already started to run towards the ball receiver even before the pass is played. The fact that he’s one of the fastest players in the league means that he is able to cover a lot of ground in a short span of time, closing down opponents quickly and giving them no time to react.

His positioning, blocking of passing lanes and tracking back are excellent, as seen above, and these cannot be measured by traditional statistics. He does need to improve some aspects of this side of the game, but the winger already influences Mumbai City’s defensive game in a big way, much more than the numbers would have you believe.

Bipin Singh is a very good example of a modern-day footballer who contributes across all the phases of the game. He is just entering the prime of his career, and so it will be fascinating to see how he improves with more experience. Singh’s success can also be seen by the fact that he has been called up to the Indian national squad this year.

He has already had a big impact on one of the best teams in the ISL this year, and this, combined with his maturity and ability, make him one of the players to watch in Indian football over the next few years.