In recent history, we have seen many South American full-backs becoming an integral part of starting XIs at top European clubs. One of the best examples of this is Dani Alves, who had an enormous impact on Barcelona in their success over the last decade in Spain and in the Champions League, while he also played for Juventus and PSG. What is said for Dani Alves can also apply to Real Madrid’s talisman, Marcelo. We can’t ignore others who were vital in their team’s successes as well, such as Javier Zanetti, Maicon and Filipe Luis, to name a few. Most of the mentioned players are Brazilians, but there are always a lot of talented full-backs in the other South American countries as well. Full-backs born in South America are usually more attacking-oriented which is no surprise given the footballing culture they grow up and spend their formative years in. In this data analysis, we will search for full-backs based in the South American leagues who can make an impact on both ends of the pitch.

This analysis will provide us with the essential information to find out which players are ready for the next step in their careers, and have the potential to play in Europe. The dataset has the Wyscout statistics for players younger than 28 who have played more than 500 minutes in the last calendar year. After looking at the charts and player abilities for the full-back position we will choose four players: two left-backs and two right-backs. Those players will be marked in red on the graphs. The next sections will explain our reasoning for shortlisting these players, who should be on the radar of clubs in Europe.

In this section, we will evaluate the defensive qualities of the highlighted full-backs and how they look compared to the rest of the full-backs in the dataset. In the first graph, we will take a look at successful defensive actions per 90 and PAdj interceptions. This data will give us information as to how often these full-backs are involved in defensive actions as well as their reading of the game. 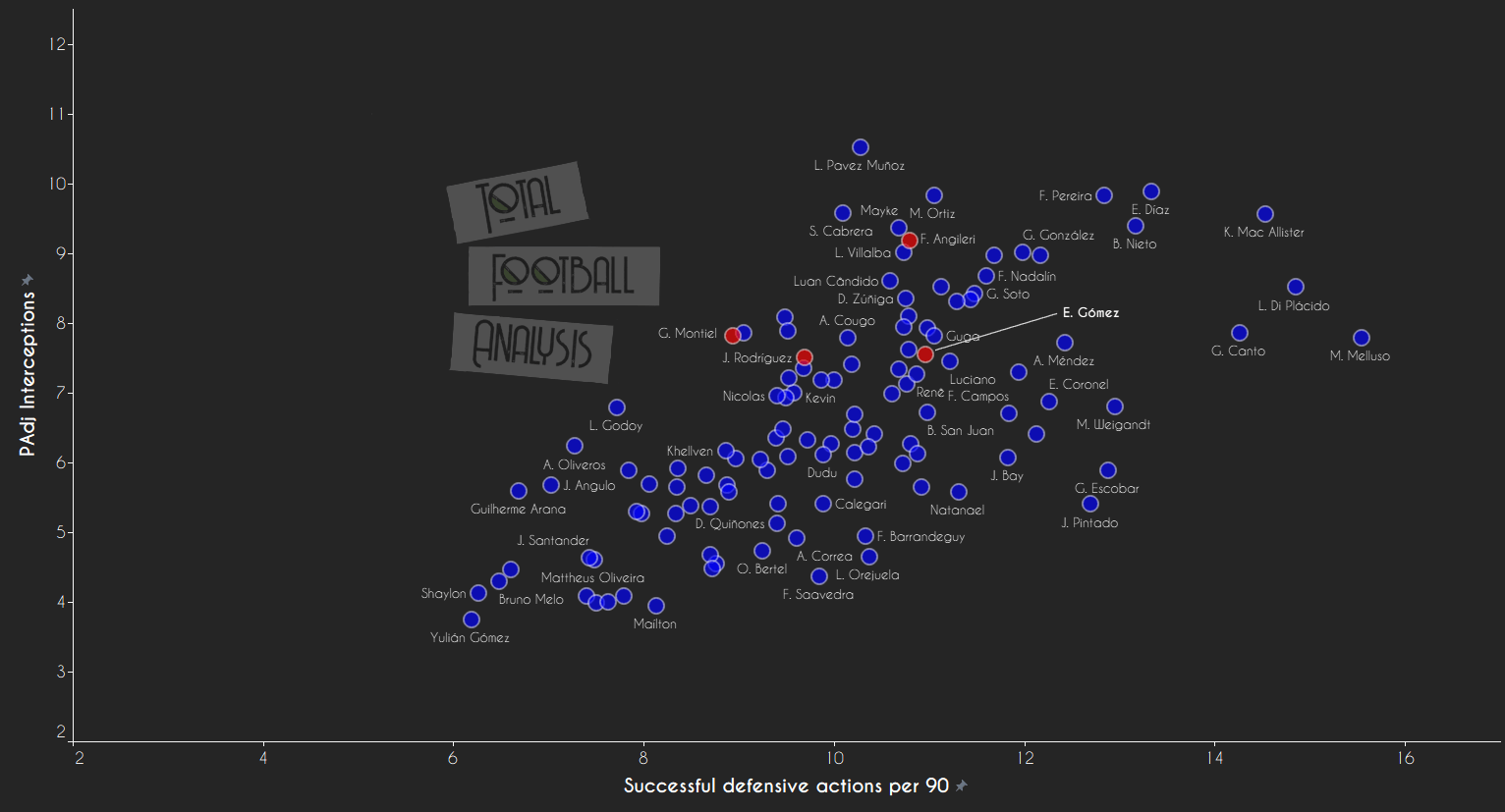 All the highlighted players show above-average anticipation and reading of the game, while Angileri and Gomez also show that they are involved in an above-average number of successful defensive actions, thereby providing defensive stability on their flank. To get more information about their defensive quality we will evaluate their success rate for both defensive and aerial duels in the next graph. 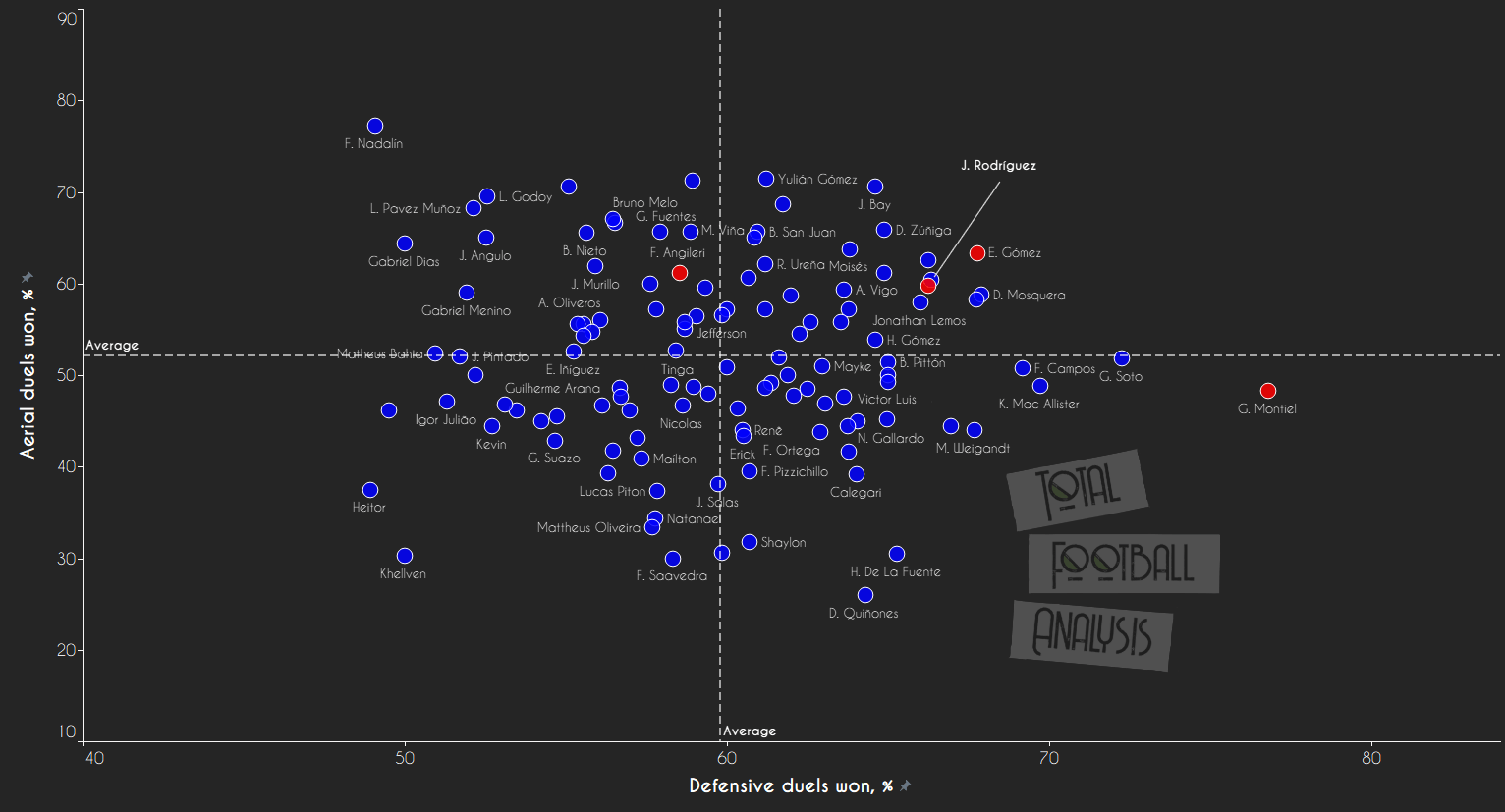 Looking at this graph we can see that Montiel is clearly winning a big chunk of his defensive duels (76.8%), but as we saw on the previous graph he is not involved too much in defensive actions, averaging only 5.44 defensive duels per 90. If he was involved in more defensive duels probably the success rate would drop, but he still shows a strong success rate for these actions, and also wins 48.3% of his aerial duels. Angileri, who showed the best numbers on the previous graph is now showing that he is slightly below average for defensive duels, winning 58.5% of his duels, but he is above average for aerial duels, winning 61.1% of them.

To conclude this section, the full-backs we highlighted are showing good numbers defensively and they are not a liability for their teams if they get involved in defensive duels. If we had to single out one player based on his defensive ability we would go with Gómez given his defensive involvement as well as a dominant performance in duels, both on the ground and aerially. In the next section, we will evaluate these players’ creativity and progression, which are crucial for a modern-day full-back.

To evaluate progression, we will take a look at the full-backs’ ability to progress the ball either by carrying the ball or passing the ball. We will use progressive passes per 90 and progressive runs per 90 in the next chart. 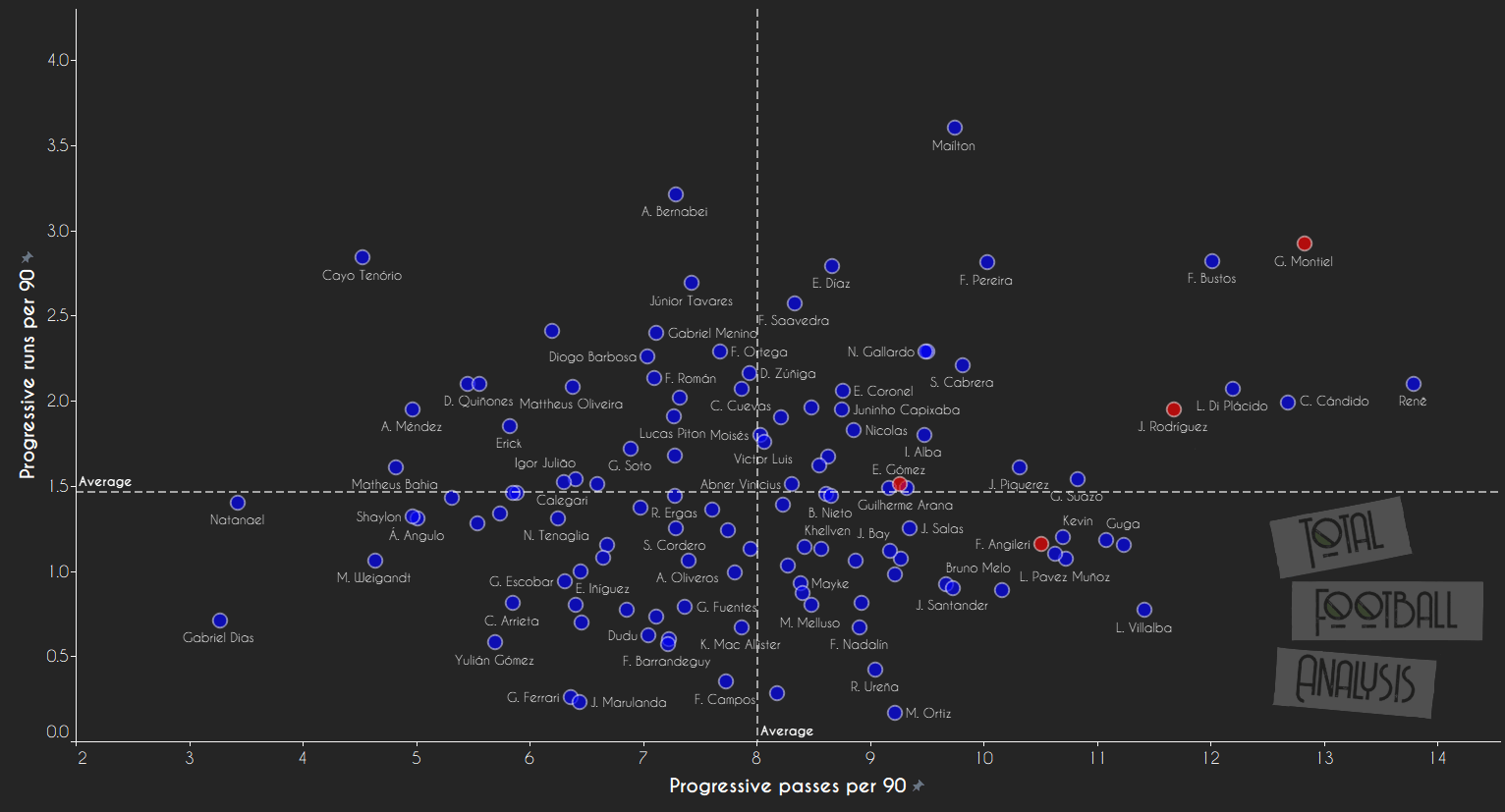 This graph shows how advanced Montiel is in progression both by carrying and passing the ball. River Plate’s right-back is the second-best at progressive passes (12.8 per 90) and third-best at progressive runs (2.9 per 90). We can therefore conclude that Montiel is the most complete progressor of the ball compared to the other full-backs in this dataset. Rodríguez also shows that he is a very good progressor of the ball and that he often attempts progressive passes. The Uruguayan is averaging 11.7 progressive passes per 90 and 1.95 progressive runs per 90. His numbers are not that far from Montiel’s and if he played in a dominant team, like Montiel does, we can assume that he would be at a similar level.

Gómez is attempting 9.26 progressive passes per 90 and making 1.51 progressive runs per 90. He shows above-average numbers for both metrics which is a great sign that he is well-balanced and not only defensively reliable. We can see that only Angileri is below average for progressive runs with 1.16 per 90, but still, he is a very good progressor of the ball with his progressive passing averaging 10.5 attempts per 90. Angileri is averaging solid numbers on the left side of the River Plate team, but his impact is probably a little limited given their tendency to play through Montiel on the right side.

Each of these highlighted players can make an impact on their team’s progression up the pitch. The next graph will consider crosses per 90 and crossing accuracy in %. Players like Dani Alves have changed the entire idea of what modern full-backs are expected to do, and crossing is therefore a very important ability for modern full-backs. 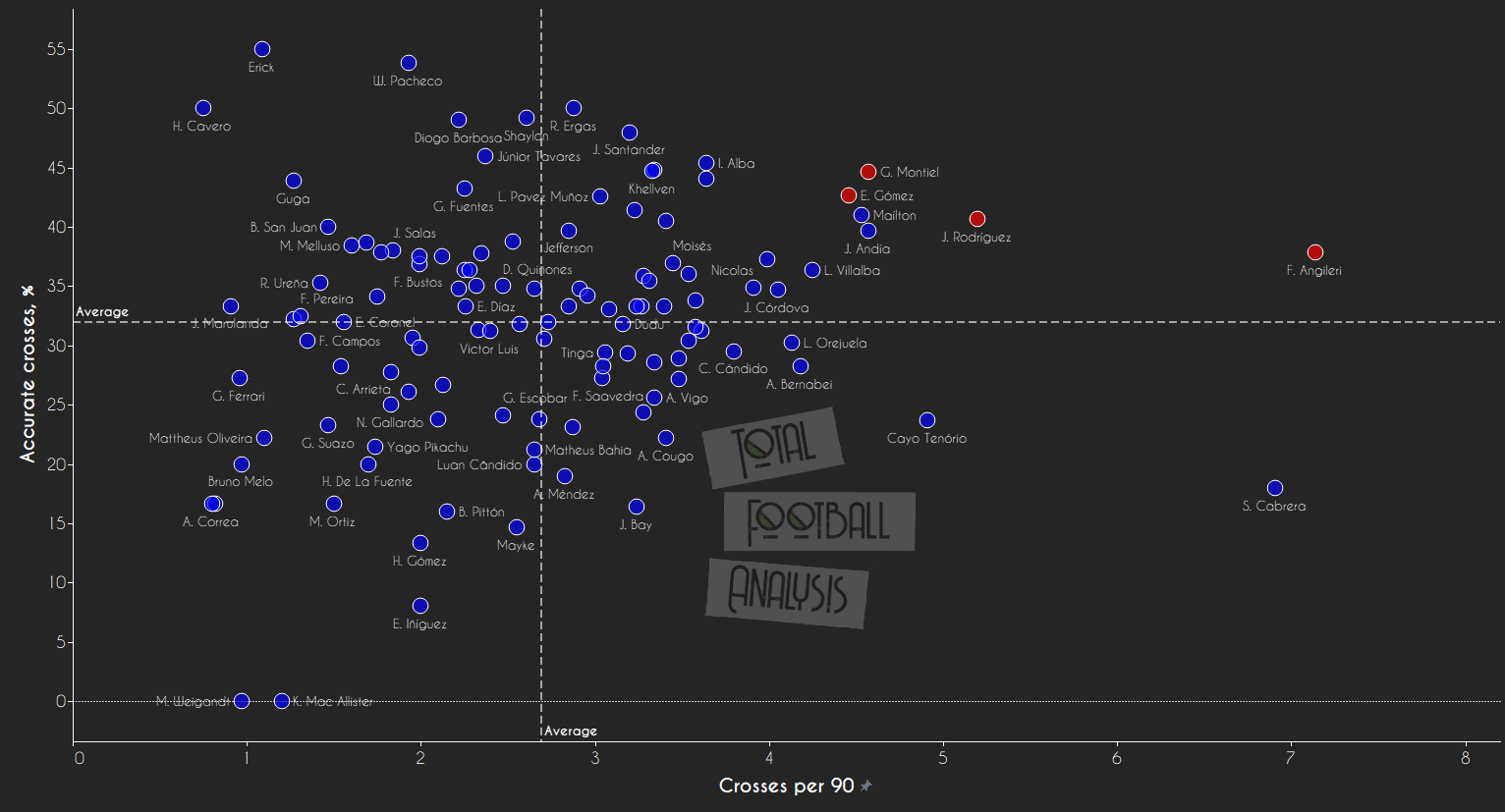 If we look at this graph it could be assumed that we picked players based on their crossing quality, but these players tick all the important areas as we saw in the earlier charts. However, they are really top-tier crossers compared to the other full-backs. Angileri is showing some extraordinary numbers by averaging 7.14 crosses per 90 with 37.84% accuracy. His crossing output is top-quality and not any different to world-class full-backs.

Rodríguez is attempting 5.2 crosses per 90 with an accuracy of 40.65%. He is the best crosser in the Uruguayan first-tier amongst full-backs. Montiel shows impressive accuracy finding the target with 44.68% of his 4.57 attempts per 90. His output is very similar to that of Gómez, who attempts 4.46 crosses per 90 with an accuracy of 42.65%. These are very strong numbers shown by both players, especially when looking at accuracy with more than four cross attempts per 90.

In the last graph of this section, we will see their creative output. Players with such strong crossing numbers should ideally do well here, which looks at shot assists per 90 and deep completed crosses per 90. The size of the markers represents xA per 90. 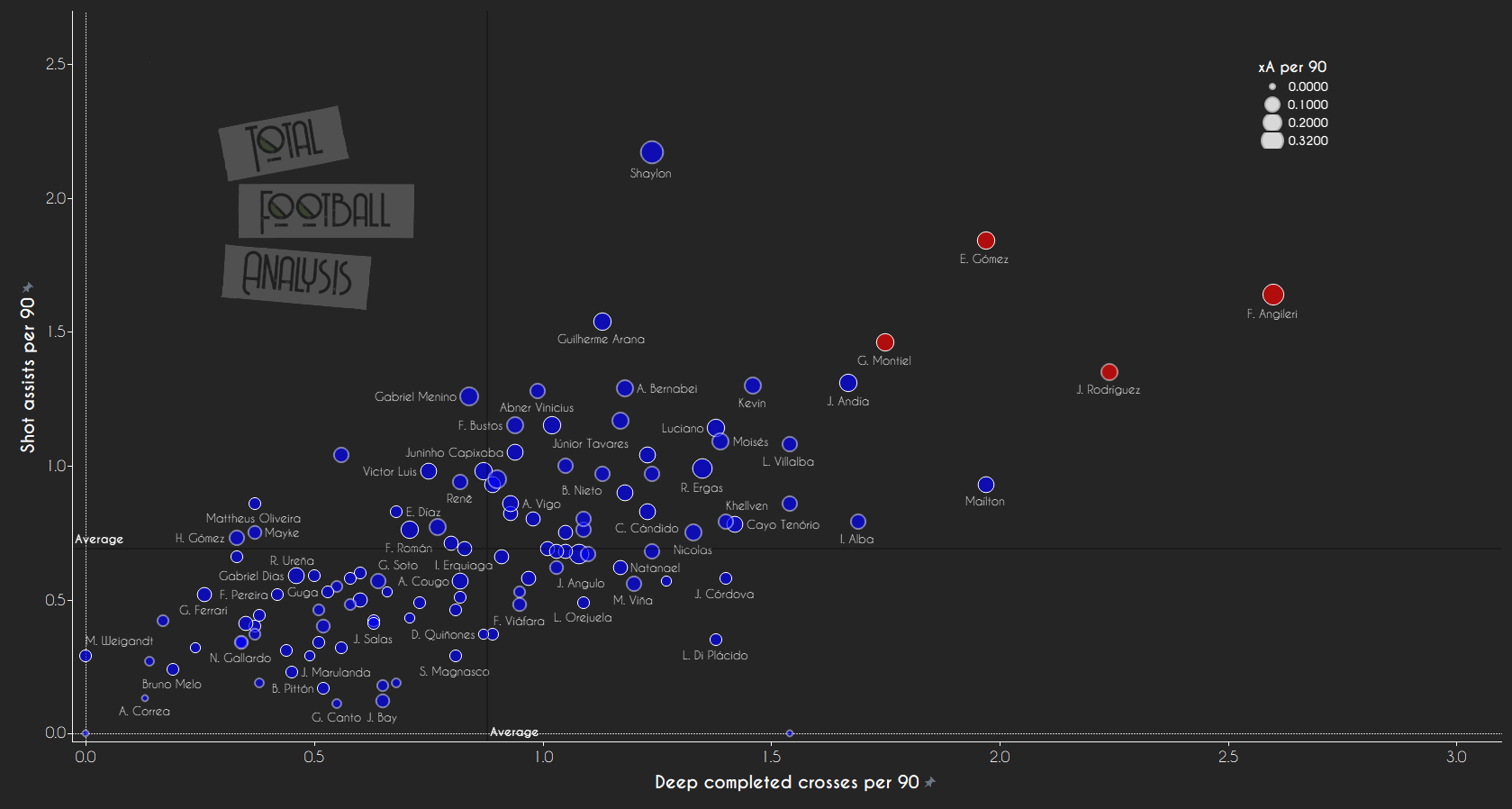 Our highlighted players are very good progressors of the ball and can create chances for their teammates as well. In the next section, we will evaluate them further based on their player profiles with data. 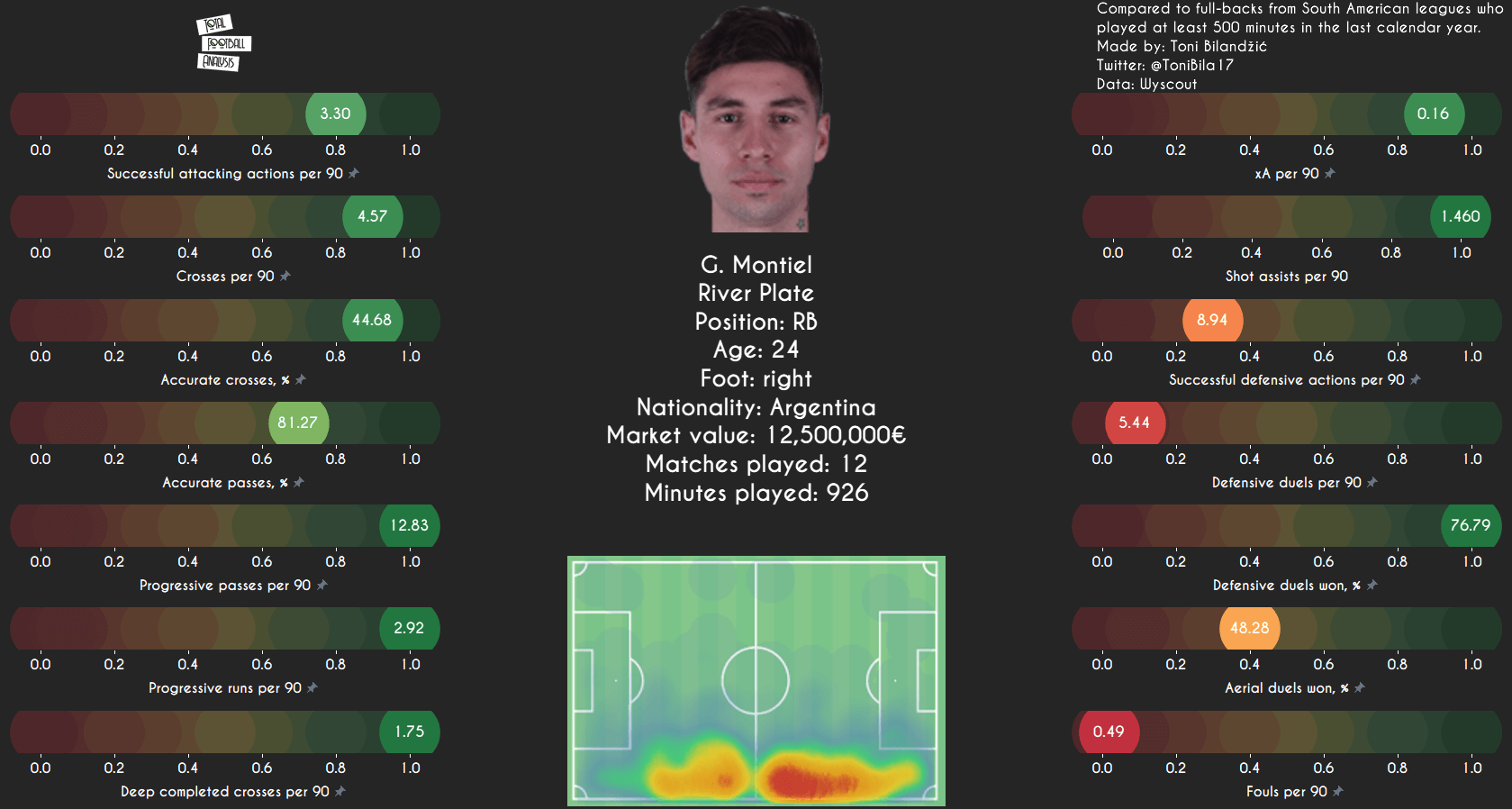 Montiel is a 24-year-old Argentinian right-back. He is a product of the River Plate academy and has already collected six caps for the Argentina national team. Transfermarkt values him at €12.5 million. Based on his player profile visual, we can see that he is ranked very high for most metrics, especially offensive metrics. He is surely the best progressor of the ball from the players we highlighted, but is also a very good crosser of the ball. Montiel is strong in defensive duels, but he needs to be involved more in the defensive phase. 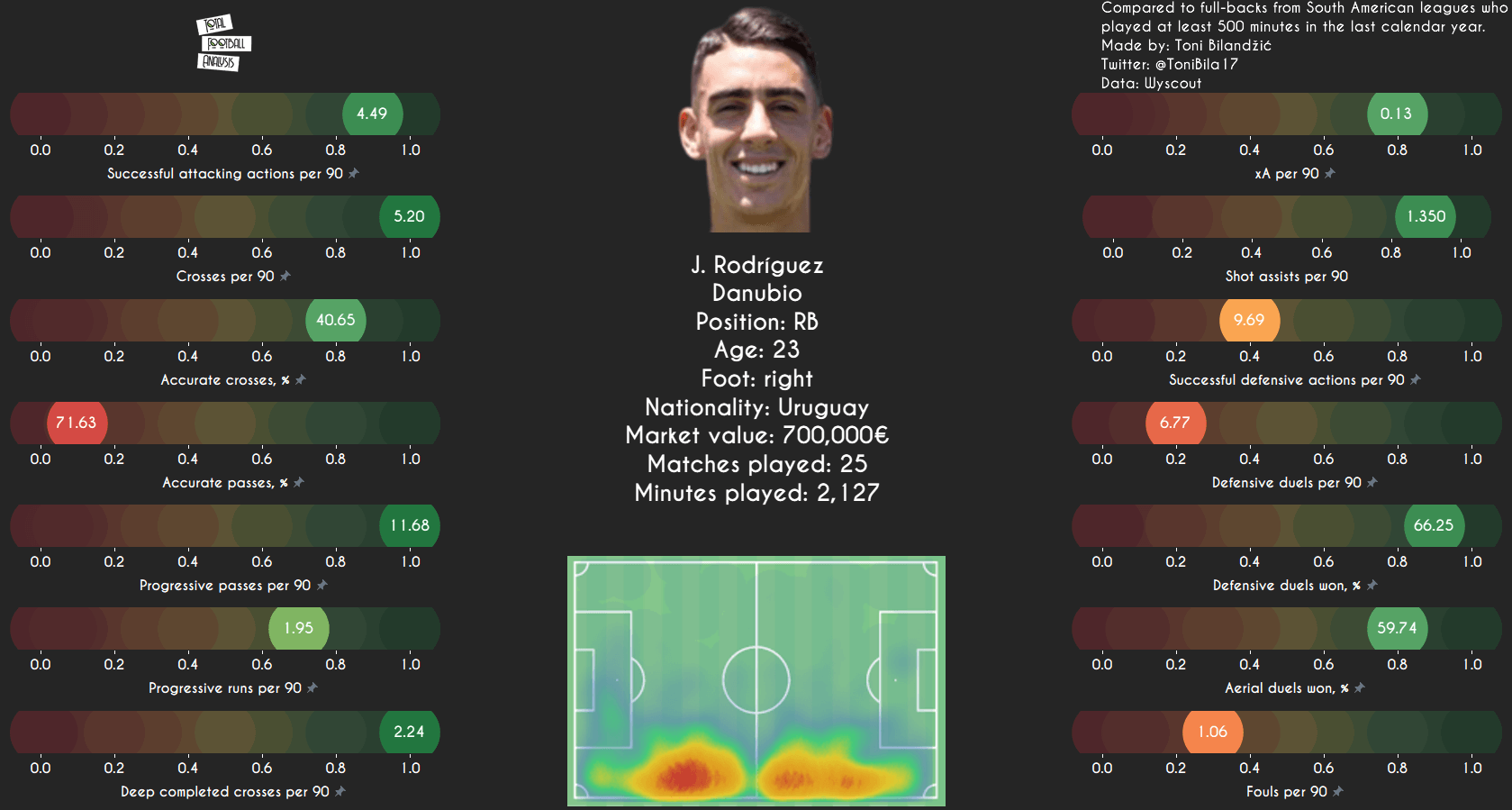 Rodríguez is a 23-year-old Uruguayan right-back. He is a product of the Danubio academy and has 29 caps for the Uruguay U20 team and 9 caps for the Uruguay U23 side. Transfermarkt values him at €700k. Looking at his player profile, along with the graphs we evaluated, we can see that he is a very good crosser and progressor of the ball who often creates promising situations for his teammates. He is strong in aerial duels and defensive duels, but, similarly to Montiel, he needs to be involved more in the defensive phase. However,  Rodríguez could be a bargain for European clubs looking for a quality right-back. 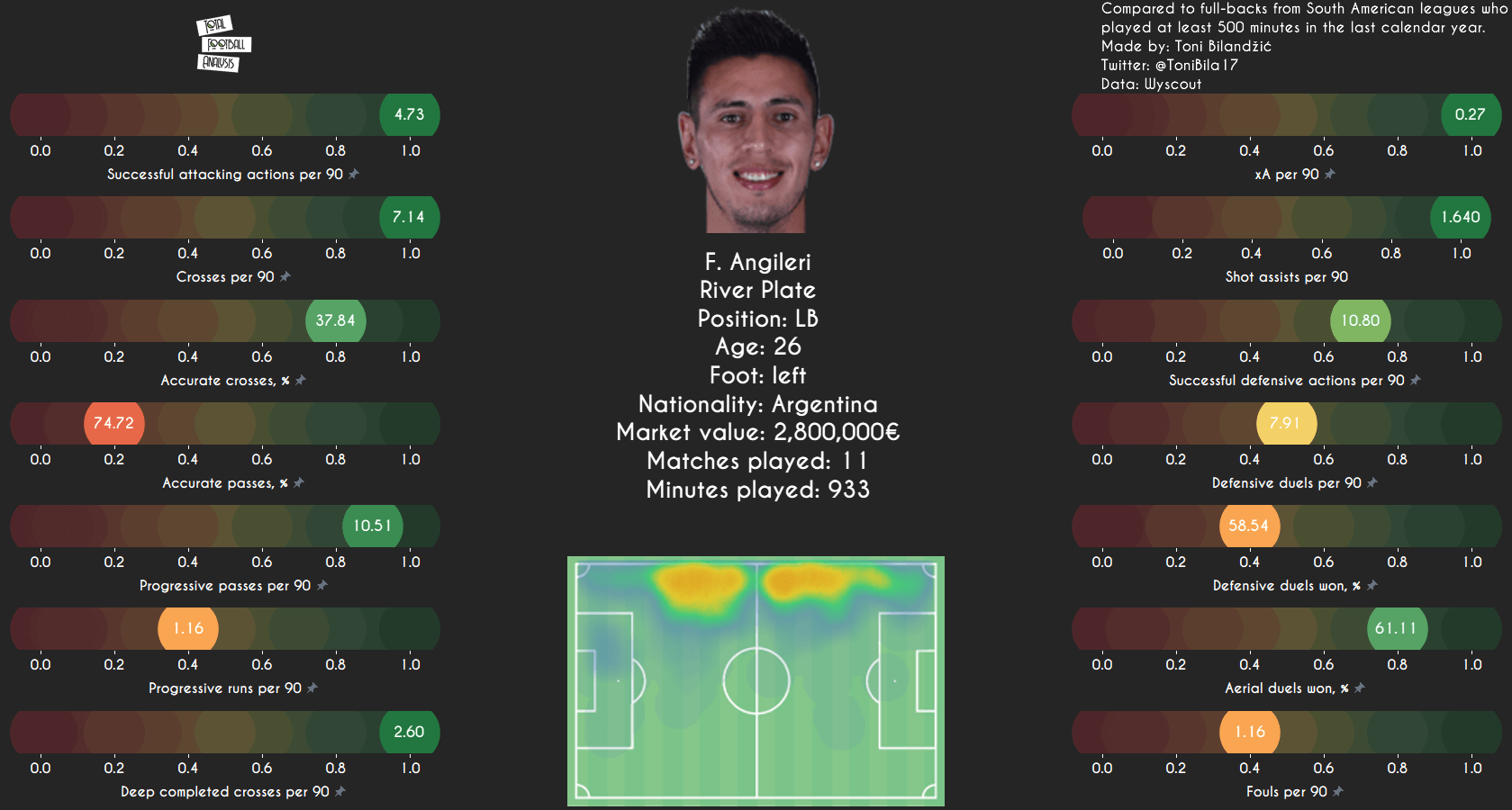 Angileri is a 26-year-old Argentinian left-back. He arrived at River Plate from Godoy Cruz in the summer of 2019 for €2 million. Transfermarkt values him at €2.8million. Based on everything we mentioned in the previous sections and on his player profile, we can conclude that he is a top-quality crosser of the ball and very successful in attacking actions as well. He provides stability in defence and wins a lot of his aerial duels, but could improve a little in his defensive duels. Angileri would be a great addition to teams who play with a right-footed left-winger who cuts inside and opens space for overlapping runs. 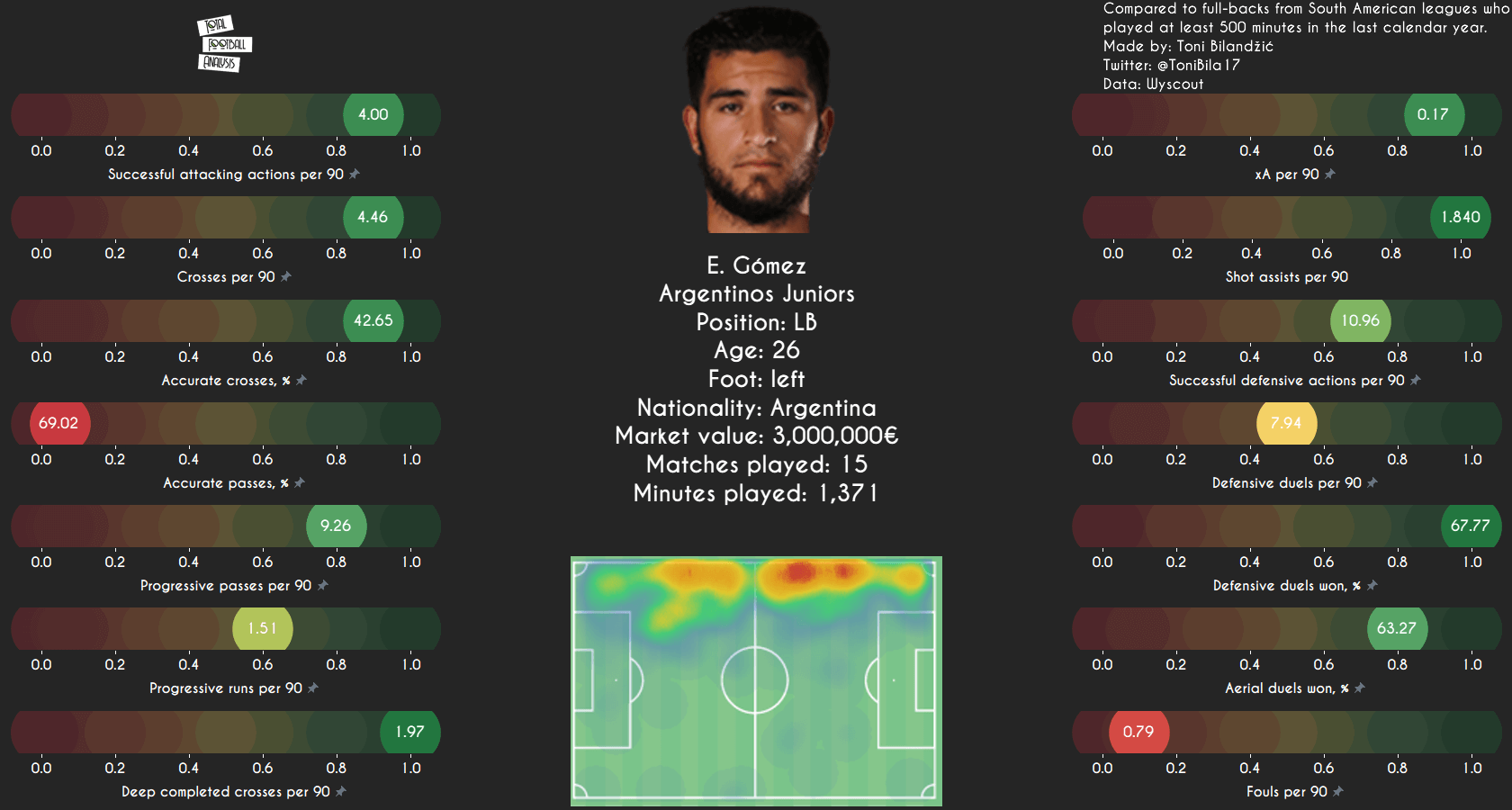 Gómez is a 26-year-old Argentinian left-back. He is a product of the Rosario Central academy, who signed for Argentinos Juniors in January 2020 for just €250k. Transfermarkt values him at €3 million. Throughout this analysis, he has shown high-quality defensive output, and we can see on the visual that he is a reliable defender who also rarely concedes fouls. Aside from his defensive quality, Gómez is a really accurate crosser and can create chances for his teammates, while also being an above-average progressor of the ball. Gómez is in his peak age and could make an instant impact for a team that needs a reliable left-back.

We have analyzed full-backs in the South American leagues and found four quality players who could be of interest to European clubs. Brazil has the biggest pool of players, but based on the data we couldn’t find players from the Brazilian leagues who are better overall, than our highlighted players.

It will not be surprising if we see some of them move to Europe this summer, especially Montiel who is a part of the Argentina national team.