The fixture at the London Stadium had a lot riding on it. After disappointing European semi-final exits for both teams earlier this month, Manchester City’s sole focus has now shifted to the Premier League, while avoiding defeat would ensure European football next season for West Ham.

City travelled to London on the back of scoring 22 goals in their last 5 league games. Victory at West Ham on Sunday would have all but sealed a fourth Premier League title in five years for Pep Guardiola’s side. However, season-ending injuries to Ruben Dias, Kyle Walker and John Stones has left the team with a fractured defensive line and forced Pep to start the game with Fernandinho at centre-back.

A lacklustre first-half City display was exploited by two-goal hero Jarrod Bowen. The champions managed to fight their way back in the second half to level the scores courtesy of a Jack Grealish strike and Vladimir Coufal’s own goal. There was a further twist when Riyad Mahrez had a late penalty saved to deny City an incredible comeback win.

Despite surrendering a two-goal first-half lead, West Ham managed to hold on to a point which secures European football for next season. Whether that is in the form of the Europa League or Conference League will be decided on the final day. The occasion also served as Mark Noble’s final home appearance as a Hammer after nearly 20 years in the first team.

This tactical analysis will break down some of the key tactics we saw in Sunday’s match.

David Moyes made one change to the team that comfortably cruised past Norwich 4-0 last week. Saïd Benrahma was replaced by Tomáš Souček in midfield. 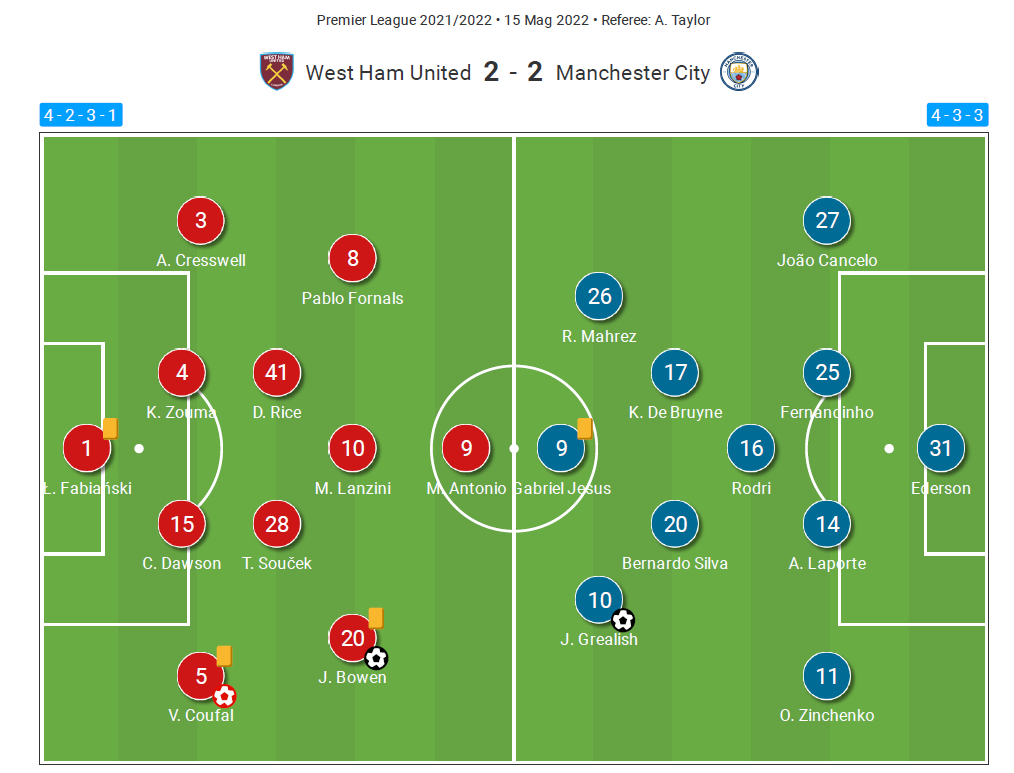 The game was mostly played in West Ham’s half. City enjoyed 77% possession and completed 668 passes (West Ham: 180 passes). West Ham would initially defend in a 4-2-3-1 shape during Man City’s build up from the back. 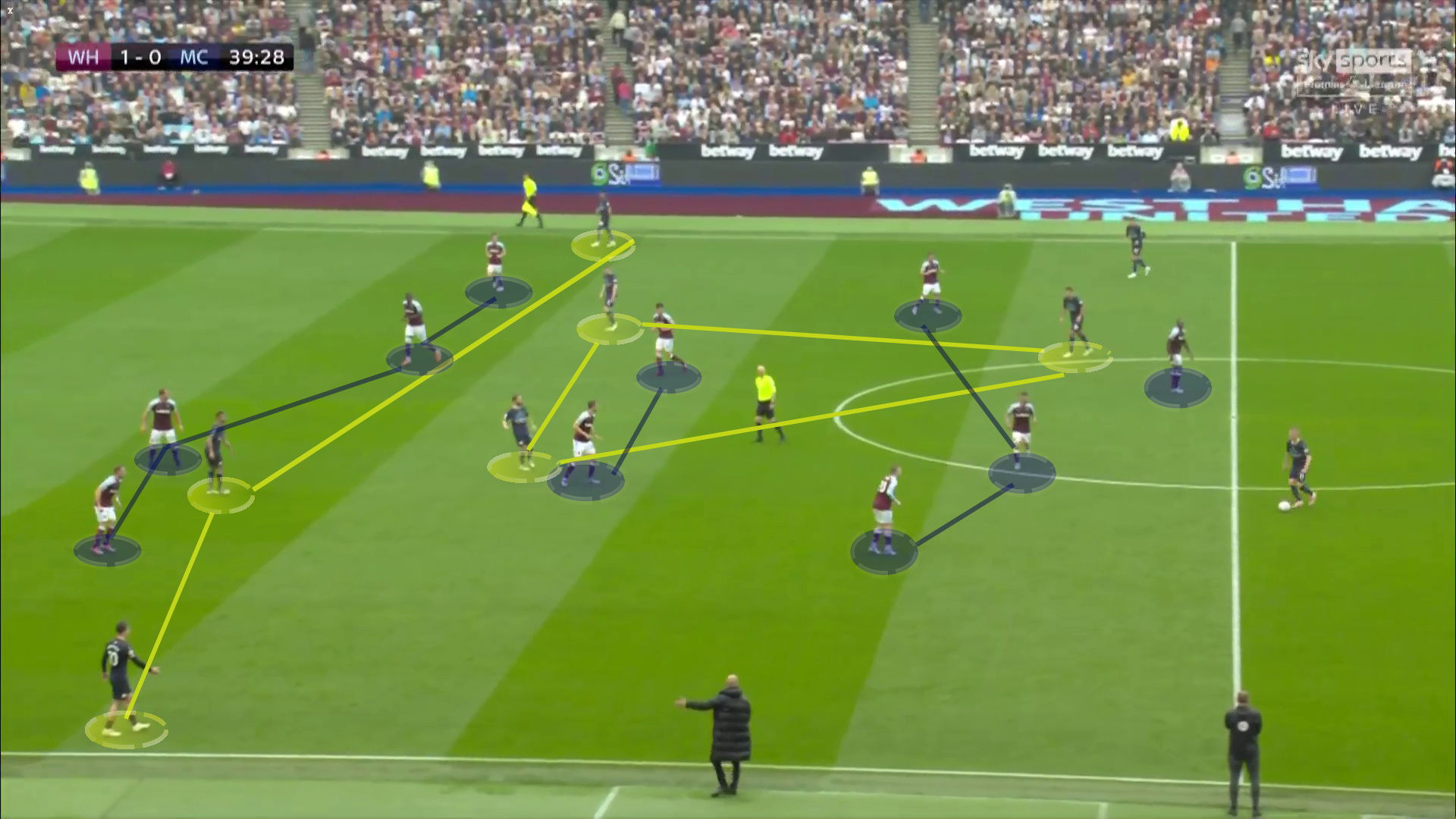 That shape would change into a 4-4-2 as City attacked and camped around the Hammers’ 18-yard box. Against such a low block, City usually forms a lot of rotations and emphasize play down the left-hand side. But during the first half, City’s passing was slow and labored. They found it difficult to build any sort of rhythm and break down the congested West Ham defensive unit. Bowen and Fornals were able to occupy the outside option, with the full-backs and ball sided midfielder blocking the half-spaces. 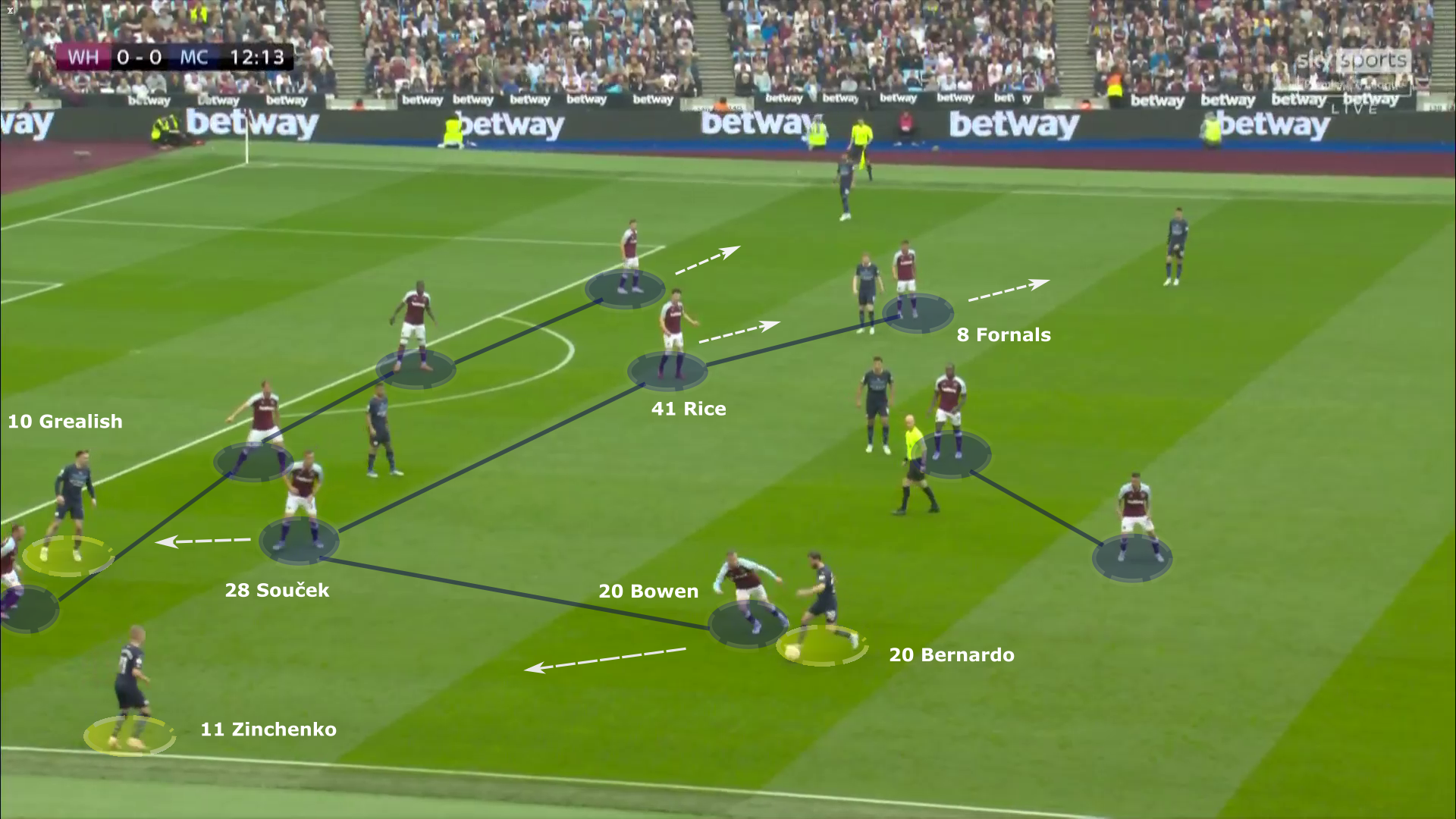 Positioning is one of Guardiola’s basic fundamentals. The positioning of his wingers and full-backs in the first half was not what we have been used to seeing from City this season. During large parts, Mahrez and Grealish were tucking inside while Cancelo and Zinchenko provided the width. The idea was to stretch West Ham’s ranks, but City found it difficult to get the ball into the feet of Bernardo and De Bruyne in dangerous pockets as the spaces became too crowded. 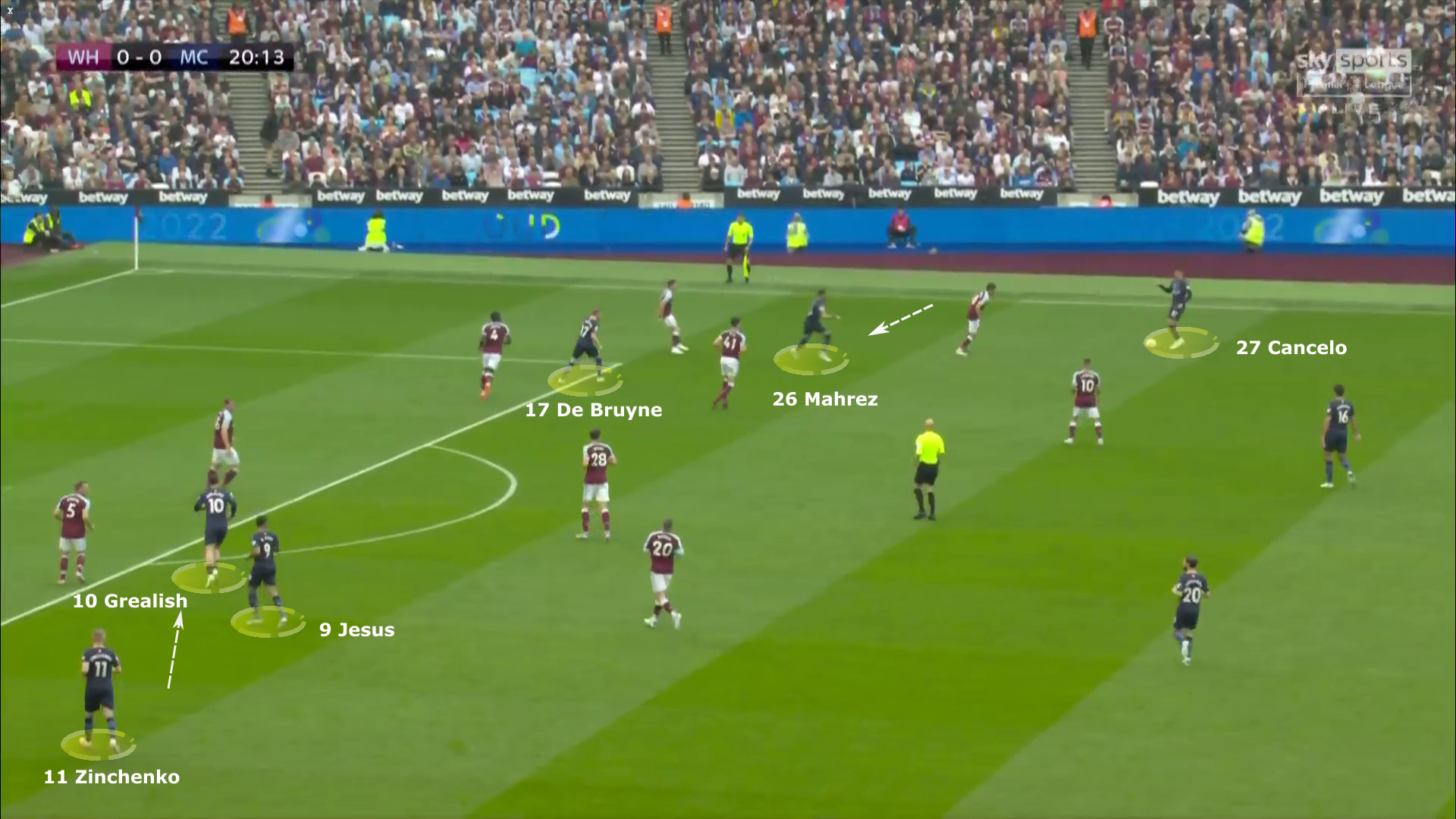 As expected, West Ham would not see much of the ball during the game. Their main strategy was to play long balls towards Antonio and Souček attempting to win the first and second duels. Each of West Ham’s goals came from long, straight crosses that a scrambled City defensive line failed to deal with. Laporte and Fernandinho were given the runaround by Bowen and Antonio, while Zinchenko was positionally suspect at left-back for both goals.

In the 24th minute, Fabianski sent a long kick towards Antonio. City are playing a dangerous high line, especially without Walker’s recovery runs to save them at times. 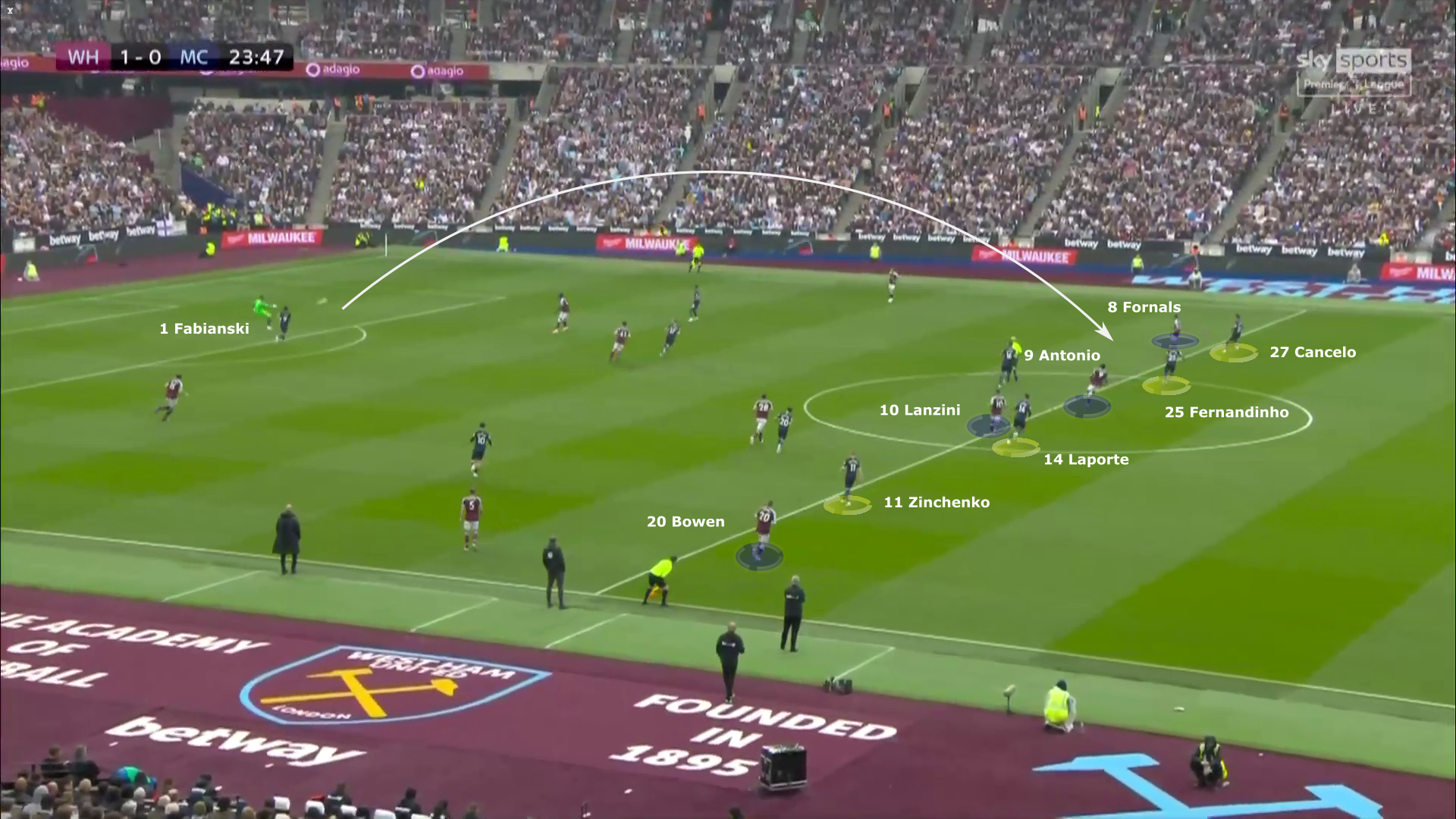 The City defense is disrupted as Fernandinho is dragged out with Antonio and Laporte tracks Lanzini’s run, freeing up the space for Bowen in behind. The ball reaches Fornals who quickly lashes it for Bowen as Zinchenko is caught napping. He rounds Ederson and slides the ball into the far corner. 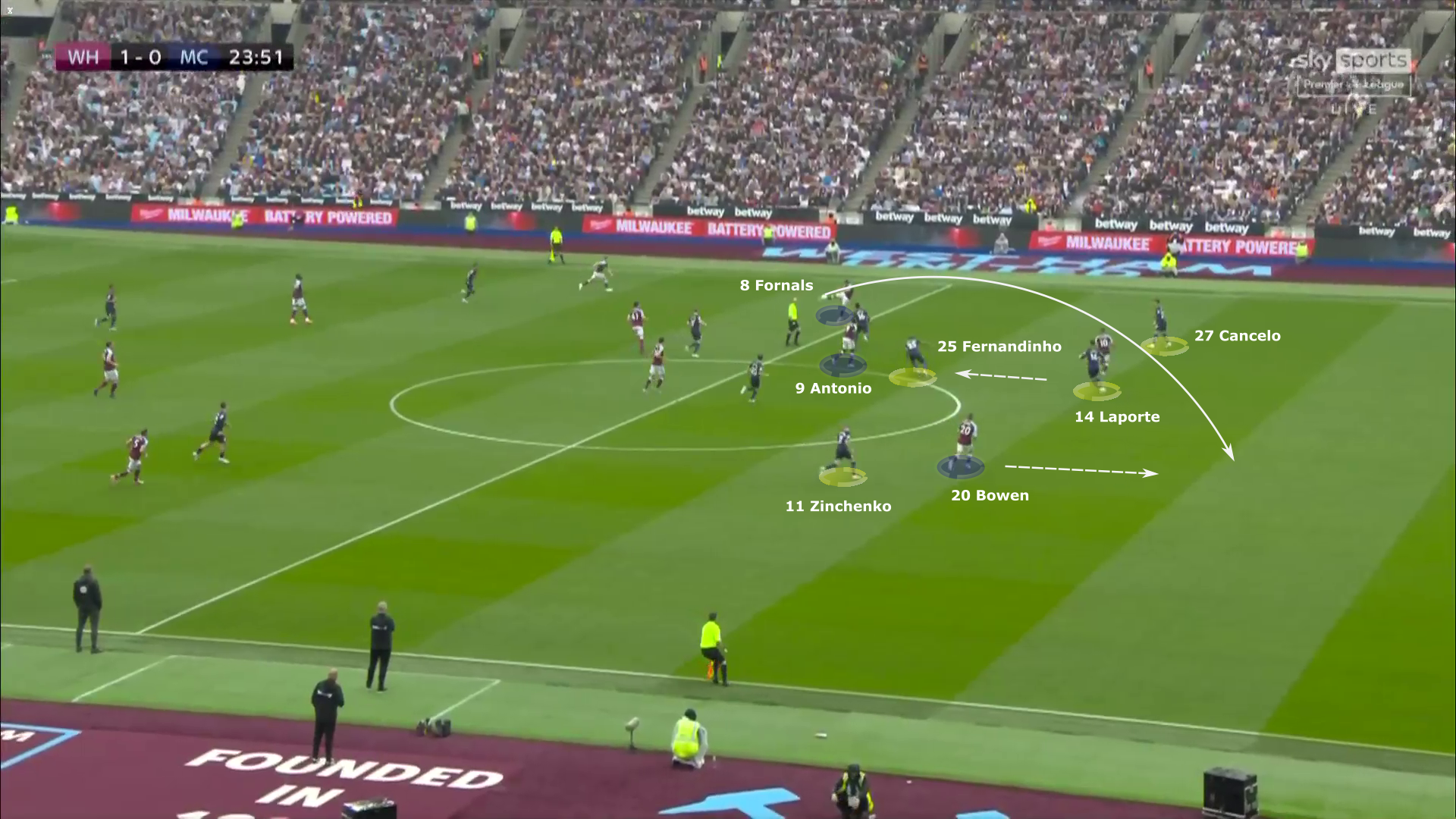 Throughout the afternoon, City struggled to deal with the out-ball towards Antonio, he was able to outmuscle Fernandinho several times. On the brink of halftime, Fabianski launched another long ball which was flicked on by Souček. Because of the positioning of the West Ham attackers around City’s back four, the City defenders could not afford to jump out and challenge Souček for the header, leaving Bernardo with an impossible task against the 6ft midfielder. 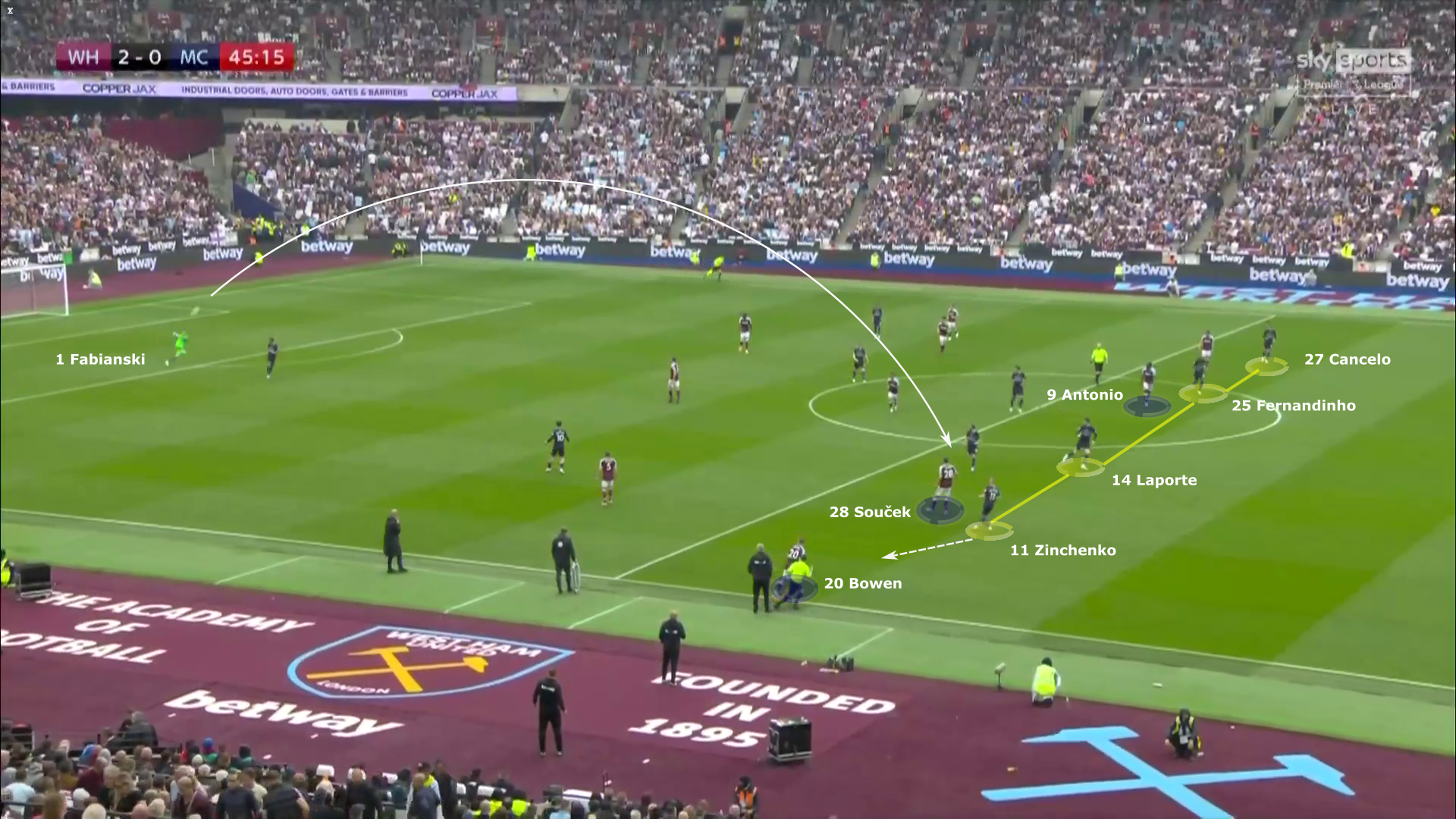 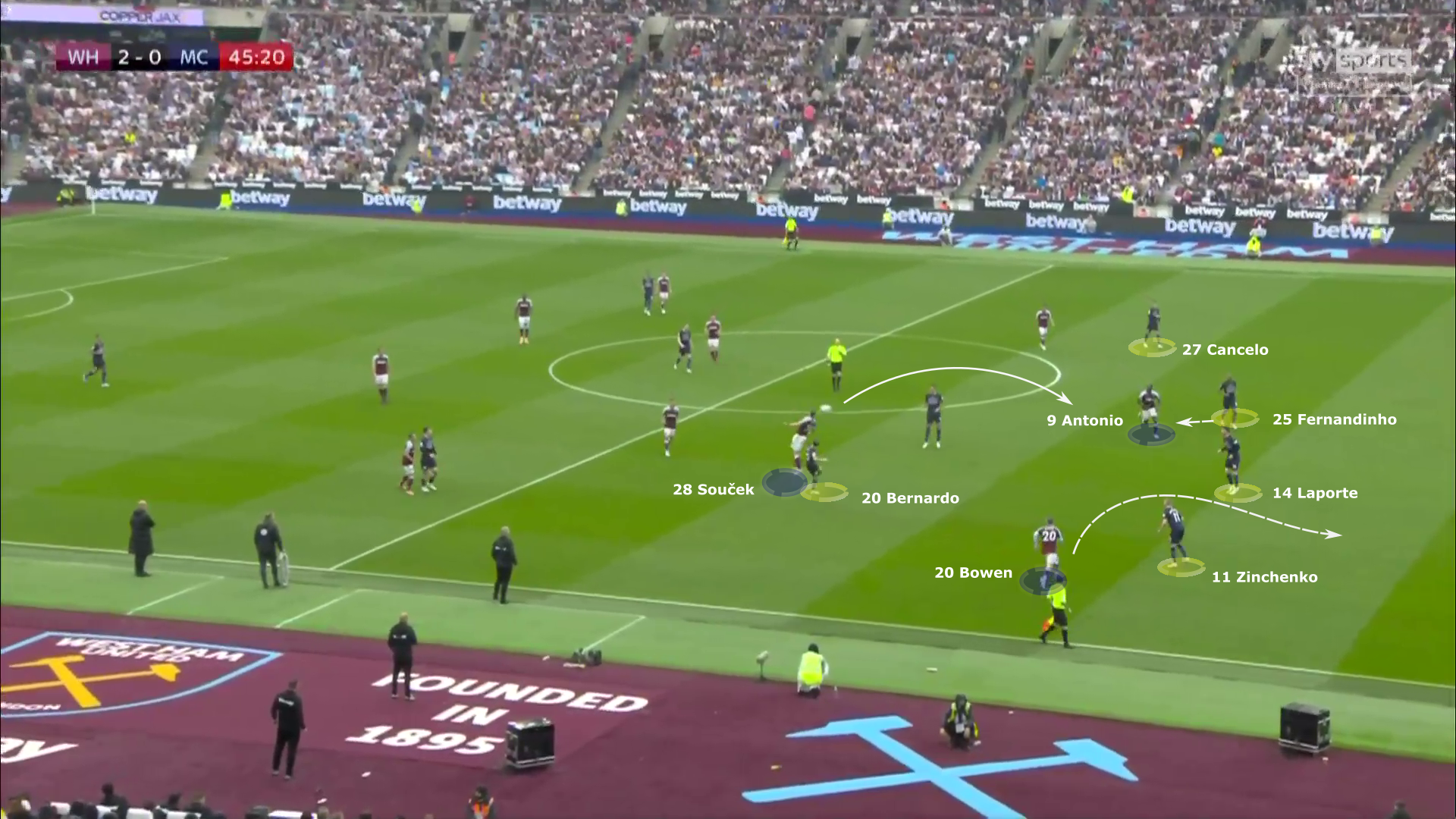 Antonio reacts first and wins the second ball, controls well and dinks it over Laporte into Bowen who made a run in the opposite direction. He was through again and was able to compose himself and finish between Fernandinho’s legs into the bottom corner for his 12th league goal of the season. With 10 assists to his name as well, the forward must be playing himself into Gareth Southgate’s thoughts for England’s World Cup squad. 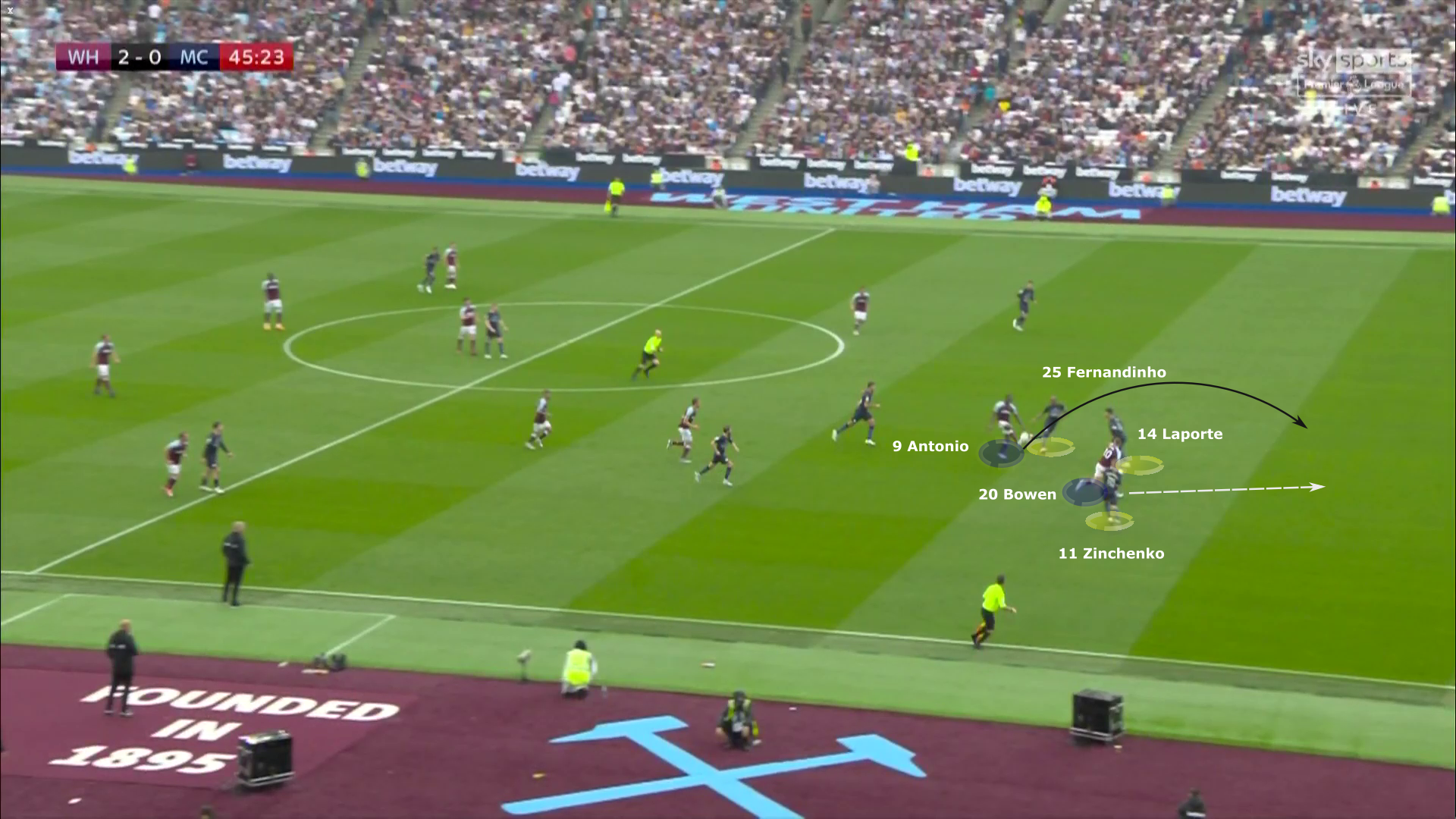 West Ham’s average positions show how they set up in a deep low block throughout the game. Bowen’s position further emphasized the team’s strategy to place him high up the pitch in that right channel and feed him balls in behind, exactly how the goals were created.

Guardiola switched to a more traditional approach from his wingers in the second half. Mahrez and Grealish hogged the touchline while Cancelo and Zinchenko tucked inside. The main reasons were to isolate the wide players while also stopping West Ham’s counterattacks. This switch also gave Bernardo and De Bruyne more freedom to operate in the right and left inside channels.

City began passing quicker and switching the play more often to Mahrez and Grealish as they enjoyed extra space on the wings. This tactical tweak caused problems for West Ham. The positioning of City’s full-backs and midfielders meant that Coufal and Cresswell could not get close to their wingers in time. As a result, City started to move the ball into more dangerous areas. 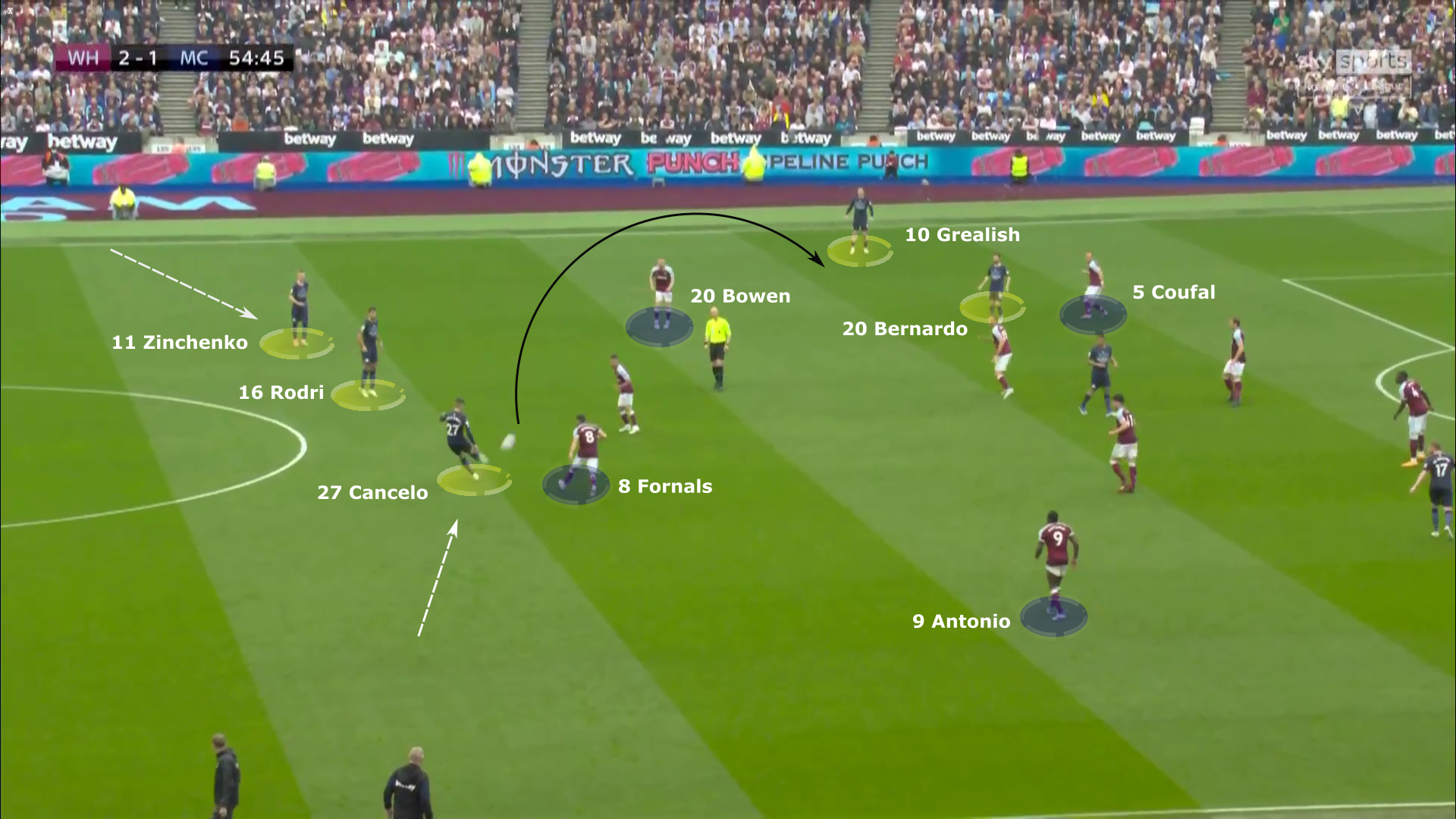 City found joy on the right side, with De Bruyne supporting Mahrez with direct, aggressive runs inside and sometimes on the overlap. In the 49th minute, Rodri receives the ball from Grealish on the left wing and switches play towards Mahrez. West Ham didn’t shift over towards their left side fast enough, which saw an angle open for Mahrez to feed De Bruyne inside the box to put in a dangerous cross. The instant switch of play from one side to the other from City helped them create the overloads. 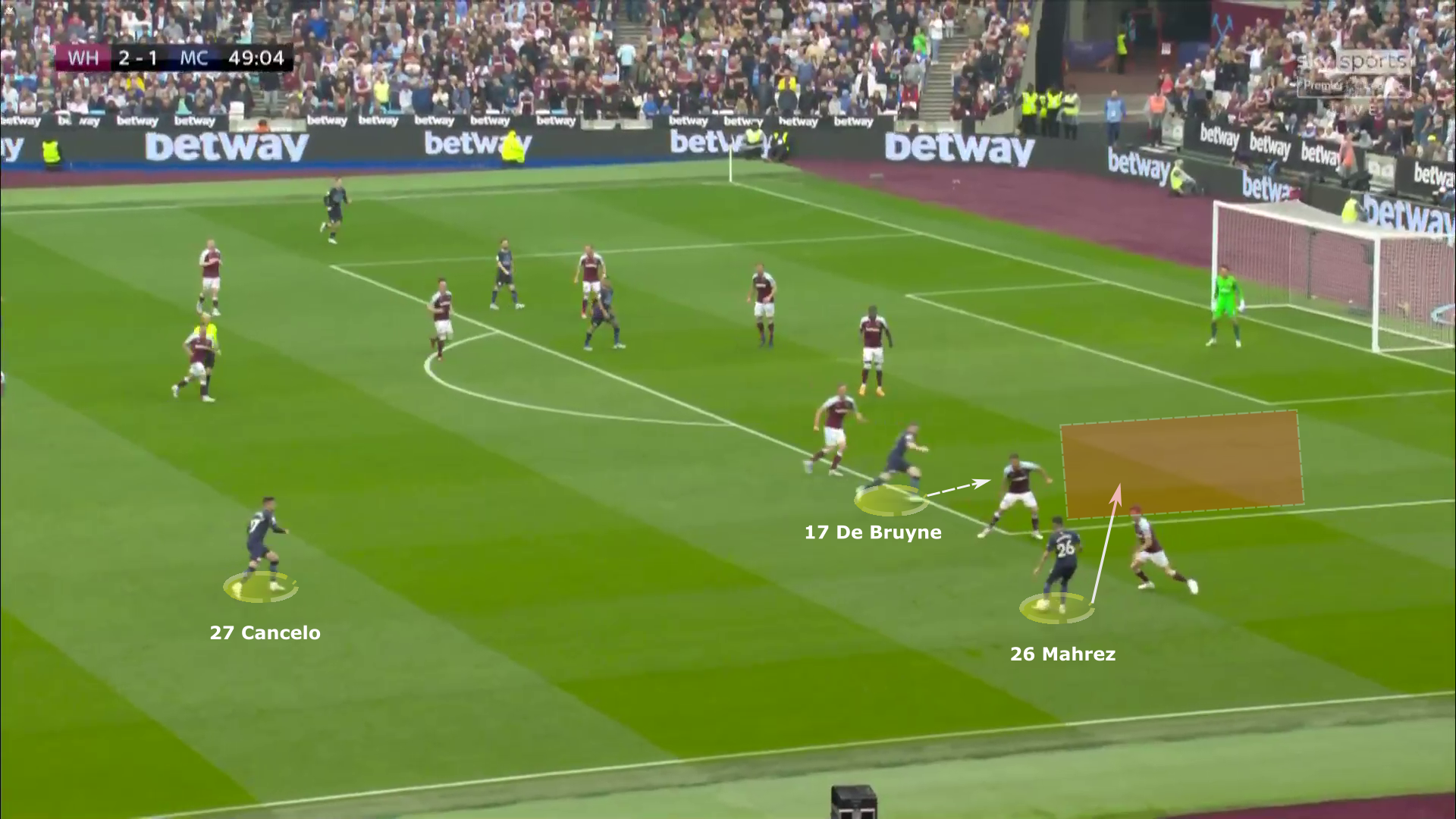 Around a minute later, Cancelo has the ball in midfield and shifts it out to Mahrez again. At this point, City are in total control and are suffocating the hosts. 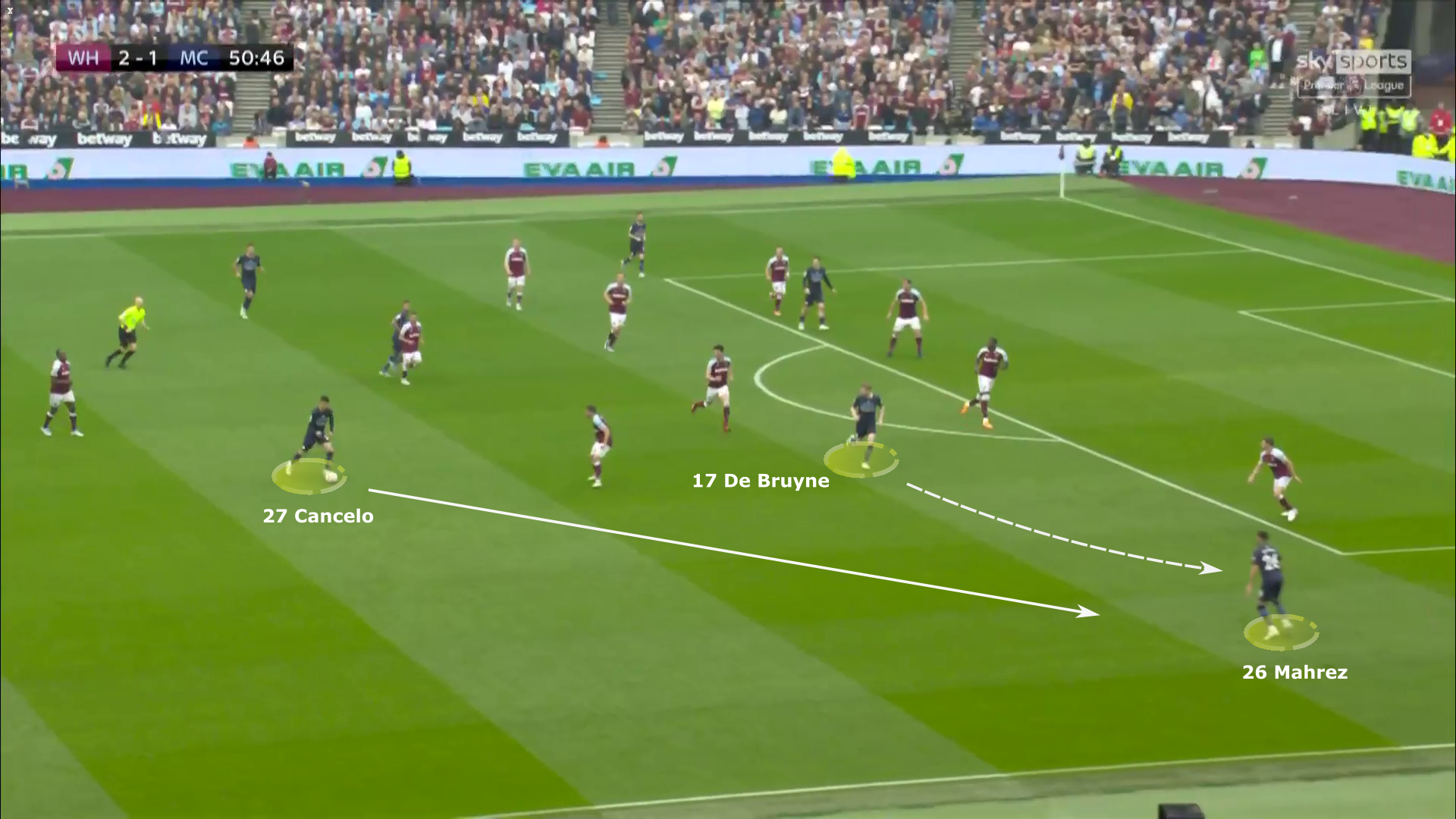 Mahrez twists and turns while De Bruyne makes an overlapping run around his teammate. The Algerian draws three defenders towards him and slides it to De Bruyne to supply another cross into the six-yard box. These movements and fast switches of play resembled the Man City we knew this season, much improved from the first half. 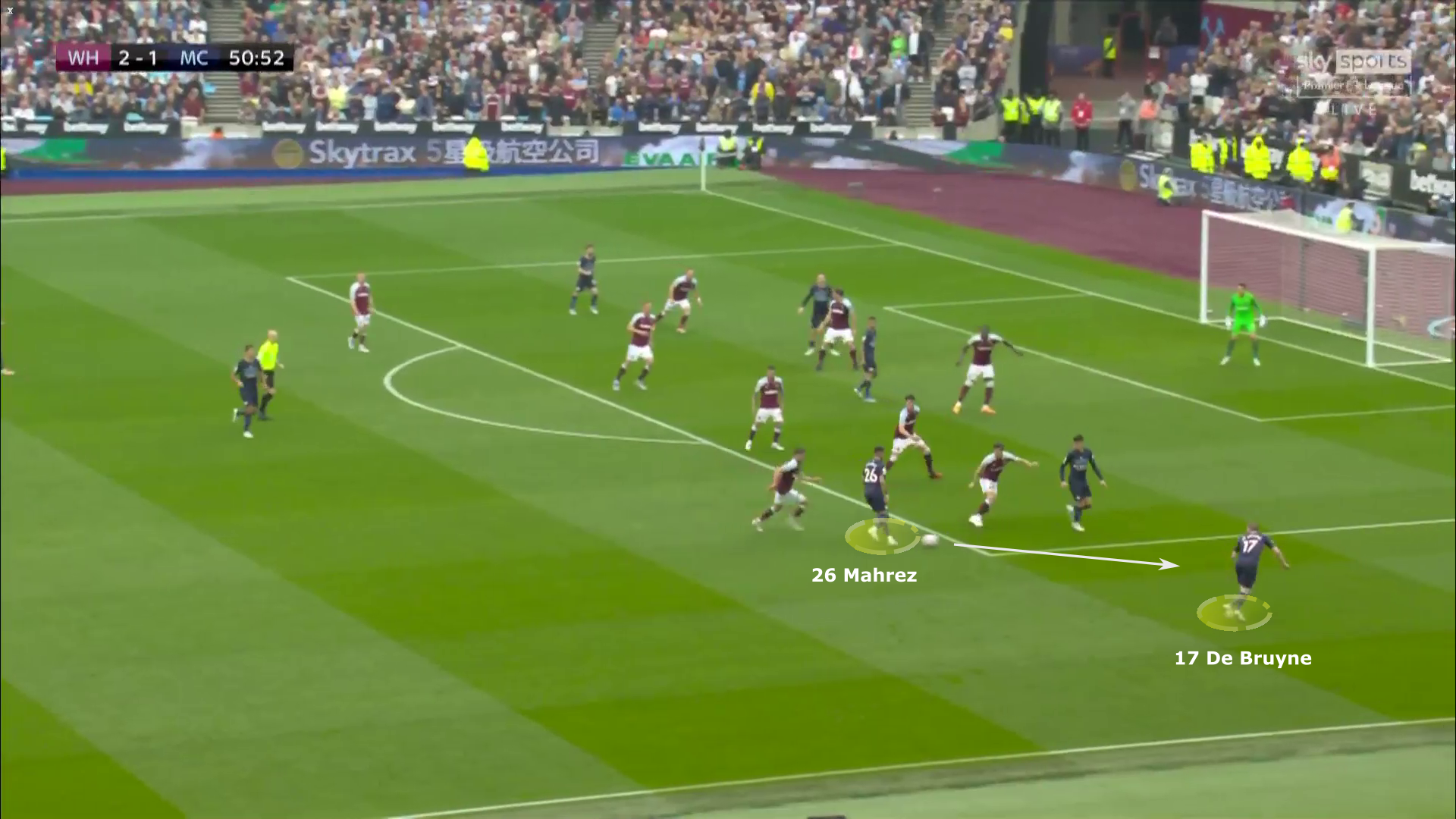 Grealish’s deflected strike minimized the deficit and City were able to equalize as Coufal headed Mahrez’s freekick into his own net. At that point City were in full control, but the odd slip up amongst the defenders gifted West Ham a few sniffs of goal. Both Laporte and Fernandinho suffered lapses of concentration and communication breakdowns with Ederson in the second half, but the Hammers were not able to capitalize.

Oddly, despite the scores level and time running out, Pep did not make any substitutions during the game. “I was thinking about that (making substitutions) but the guys who were playing were playing good and the game was in a high, high rhythm, so today we decided to stay with those guys,” Guardiola told Sky Sports after that match. The same applied on this latest London trip against Crystal Palace, when City drew 0-0 and Pep opted not to make any changes.

Man City took as high as 31 shots in Sunday’s game, whereas West Ham had only six shots. The outcome? Both teams scored two goals. What City missed more than a fit center-back in Dias or Stones was a center forward, a point of reference in the attack, maybe a player like Erling Haaland, who is on his way to the Etihad next season and will be hungry to get on the end of the blaze of balls City will supply for him.

For the home side, it proved to be the perfect night to bid farewell to Mr. West Ham, their captain, Mark Noble. An entertaining game, the London Stadium roaring, and European qualification now guaranteed.

Fabiański’s penalty save to deny Mahrez and Manchester City the three points and one hand on the Premier League trophy could prove to be vital in the title race. It could mean one more delicious opportunity for a narrative twist.

If Liverpool do their job against Southampton on Tuesday night, the title will be decided on the final day. Wolves travel to Anfield while City host an Aston Villa side managed by Liverpool legend Steven Gerrard and features a certain Philippe Countinho in midfield. It couldn’t, could it?