An all-German European final awaited the world on Thursday night, in what would have been the first in just under a decade. The last time around, Jupp Heynckes’ treble-winning Bayern Munich broke Borussia Dortmund hearts in Wembley in the 2013 UEFA Champions League final.

The stage was set. Eintracht Frankfurt would face RB Leipzig in Seville in what was likely to be a breath-taking showcase of Bundesliga brilliance.

Oliver Glasner’s Frankfurt completed their side of the bargain, putting ten-man West Ham United to the sword with a 3-1 aggregate victory. Leipzig simply needed to not lose, only it wasn’t as simple as it looked on paper.

Rangers stepped out onto their home turf on Thursday night with fire burning through their loins. A well-oiled mountain stood between themselves and the UEFA Europa League final, but to quote Ole Gunnar Solskjaer, “mountains are there to be climbed.”

The Scottish champions were hungry. Like wolves, caged, starving for their first taste of a European final in fourteen years. Giovanni van Bronckhorst unleashed his rabid beasts, as they feasted in front of the immensely vociferous Ibrox, spurring on the hunt to no avail.

Leipzig crumbled. Rangers crowed. The Gers ended the all-German dream but are now dreaming themselves after such a splendid 3-1 victory, setting them en route to the final.

This article will be a tactical analysis of the game between Rangers and Leipzig from Thursday night. It will be an analysis of the key tactics during the game, looking at what went wrong for the visitors. 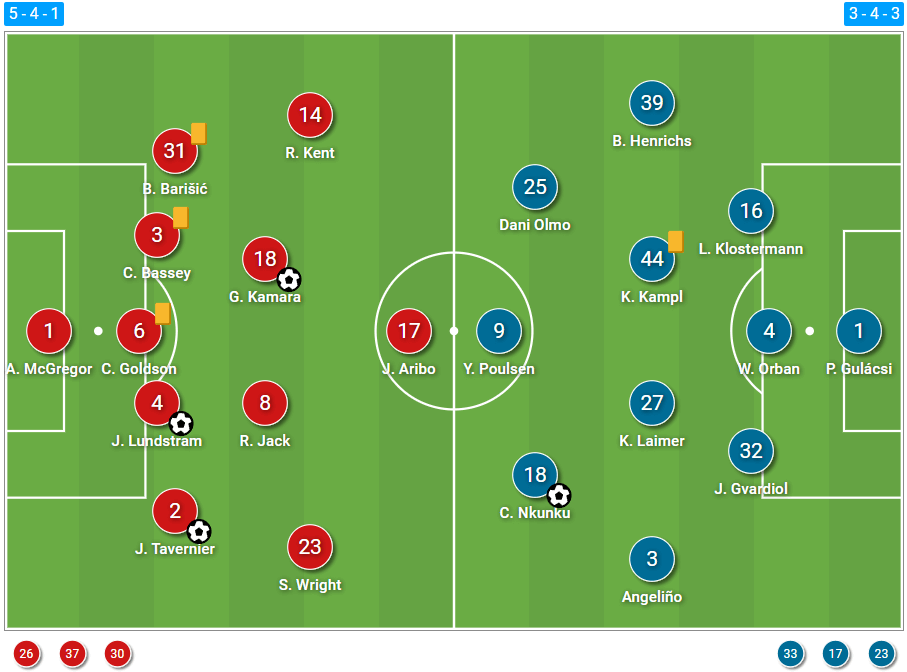 Since van Bronckhorst’s arrival, towards the tail end of the previous calendar year, Rangers have set up in either a 4-3-3 or a 4-2-3-1. In this game, the Dutch coach opted for a 5-2-3, which dropped into a 5-4-1 during the deeper defensive phases.

The backline remained exactly the same from the team that played out a stalemate against their bitter rivals Celtic at the weekend in the Old Firm derby. However, John Lundstram shifted in as a right centre-back to complete the back five.

This was similar to Rangers’ approach against Leipzig in the first leg last week in the 1-0 defeat, only Lundstram was playing centrally, and the Gers were far more passive out of possession in their 5-3-2 on the night.

Meanwhile, Scott Wright was placed back into the first eleven in place of Fashion Sakala, who eventually came on just before half-time after Joe Aribo was forced off through an unfortunate injury.

For the visitors, the youthful and ever exuberant head coach Dominico Tedesco made three changes within his 5-3-2 from the side that was punished 3-1 by Borussia Monchengladbach on Monday night.

Benjamin Henrichs walked back into the team, with Nordi Mukiele having to take a seat on the bench. The more experienced Lukas Klostermann returned on the right side of the defence with 22-year-old Mohamed Simakan being the fall guy yet again, as he was when Die Roten Bullen took on Atalanta back in April in the first leg of the competition’s quarter-final.

The final change from Sunday’s tie at Celtic Park was Andre Silva dropping to the bench with Yussuf Poulsen being tasked with leading the line head of Dani Olmo and Christopher Nkunku.

Leipzig blocking off the centre

Tactically, the approach was quite similar from both sides. Out of possession, the two teams pressed with three forwards against three centre-backs as well as having two against two in the middle of the park. However, Leipzig’s approach was a little more conservative than their opponents.

While building their attacks from deep, moving up the pitch, Rangers would push their wingbacks high on the flanks, leaving the backline to spread wider in front of Leipzig’s forward line. 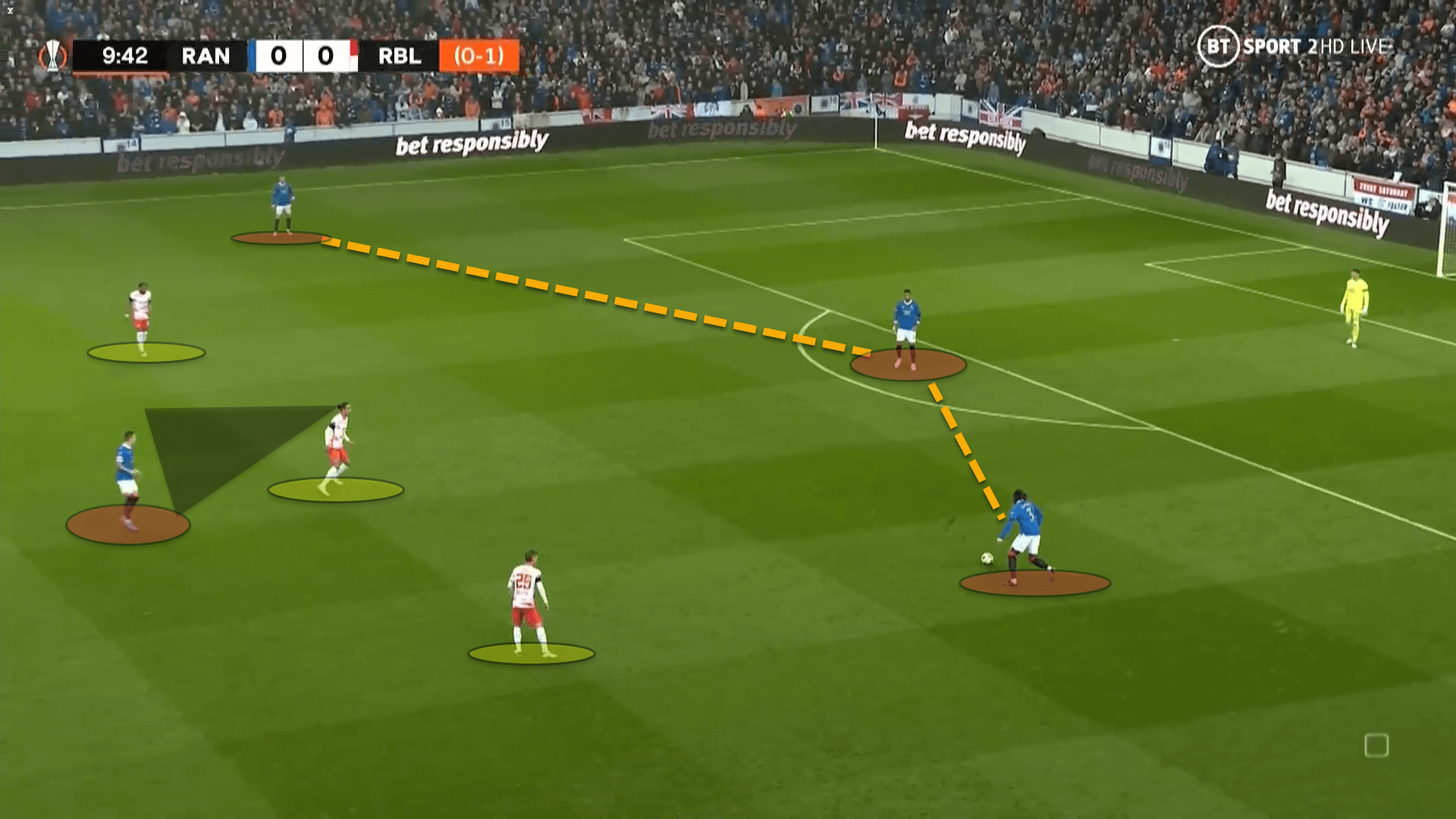 Interestingly, despite being a press-heavy side, the German giants didn’t really apply too much pressure to Rangers’ central defenders and were happy to allow them to circulate the ball amongst themselves.

This was evident in the first half especially when Leipzig’s Passes allowed Per Defensive Action (PPDA) averaged out at 14.77. 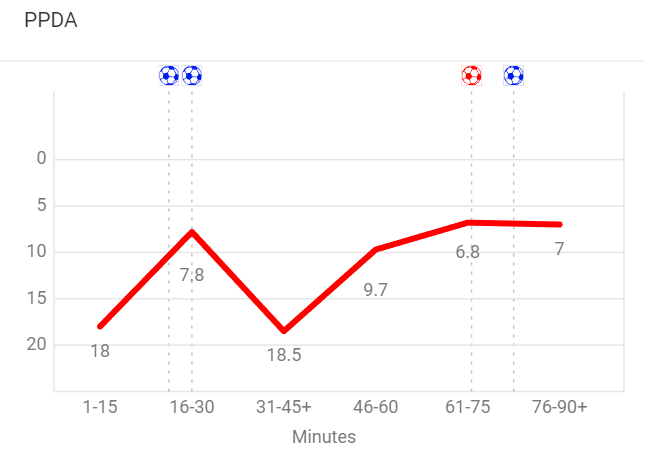 Tedesco wanted his front three to remain compact in their 5-2-3 shape and block off access into Rangers’ double-pivot sitting behind them, particularly Jack who would drop much deeper than his counterpart Kamara.

By having the front three block off the passing lanes into the space behind them, Leipzig’s two central midfielders, Kevin Kampl and Konrad Laimer, could focus solely on picking up any of the Rangers forwards that dropped deeper, or following them into the channels if they made runs in behind.

The pair were playing zonally, protecting the area in front of the backline, and so, in theory, didn’t have to worry about Jack or Kamara. Only in cases where Leipzig’s first line of pressure was breached, and the ball reached Rangers’ double-pivot, would either Laimer or Kampl step up to apply pressure to their opposite numbers. 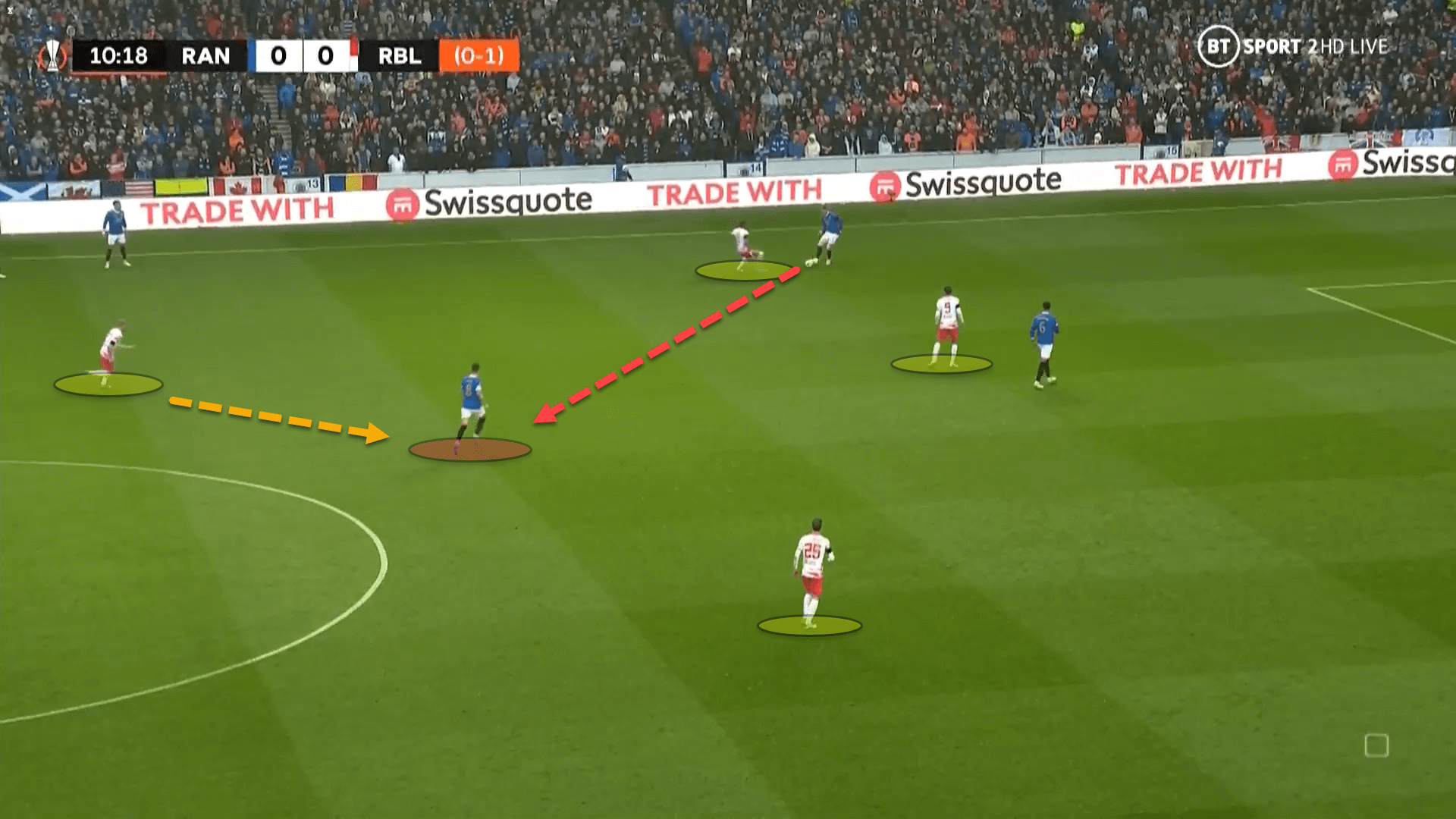 Leipzig’s approach did work. Tedesco’s men were successfully able to negate Rangers from playing into Jack or Kamara, forcing the Scottish side to look for different routes to progress the ball up the pitch.

This is clear from the hosts’ passing map throughout the game. The links between the backline and midfield pivot were extremely weak. 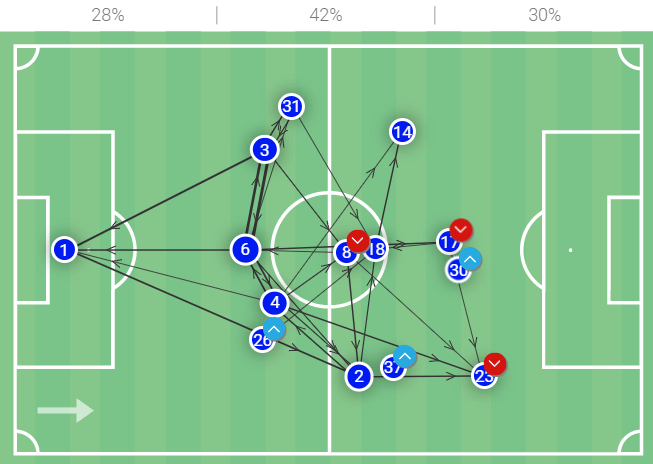 Thankfully for Rangers, their game model doesn’t solely rely on having to keep the ball on the floor, playing gorgeous possession-based football to create goalscoring opportunities.

Van Bronckhorst may be from the Netherlands, but Rangers are anything but a stereotypical Dutch-coached team. To combat their inability to break through Leipzig’s compact first and second lines of pressure, Rangers were hitting balls into the channels for runners to latch onto.

It may seem like hyperbole, but this crucial European clash was won and lost in the channels. Having Aribo, Wright and Ryan Kent, as well as Kamara on occasion, making runs in behind the backline in their respective channels dealt significant damage to Leipzig. 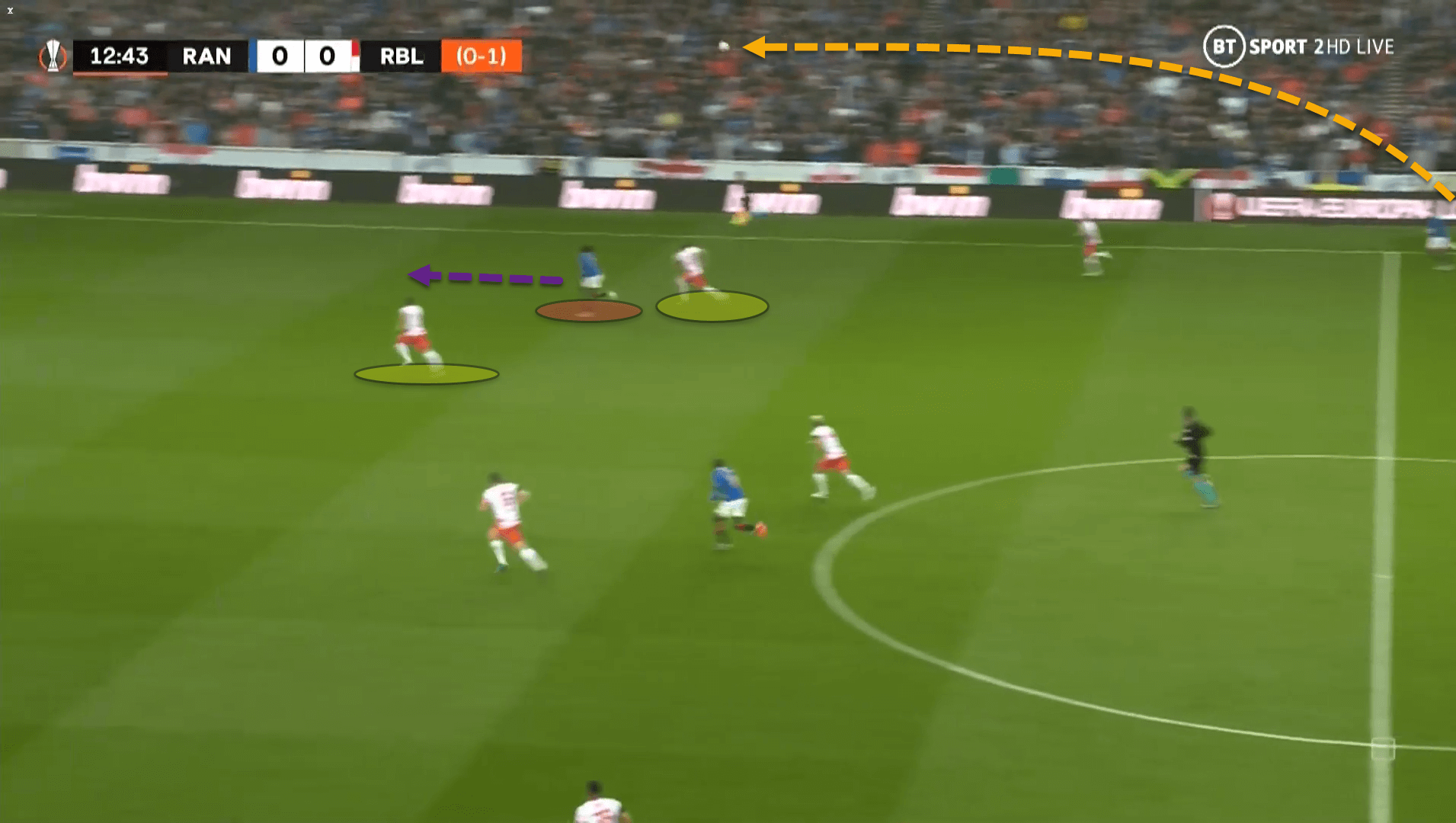 Rangers’ forward line would interchange regularly, running down different channels to give the defenders different scenarios to think about.

Within the first fifteen minutes of the game, van Bronckhorst’s team had tried numerous balls in behind to runners attacking the depth. Some almost worked, but the majority of them ended up causing a turnover in possession in Leipzig’s favour. Nevertheless, Rangers kept knocking on that door and, eventually, it swung right open. 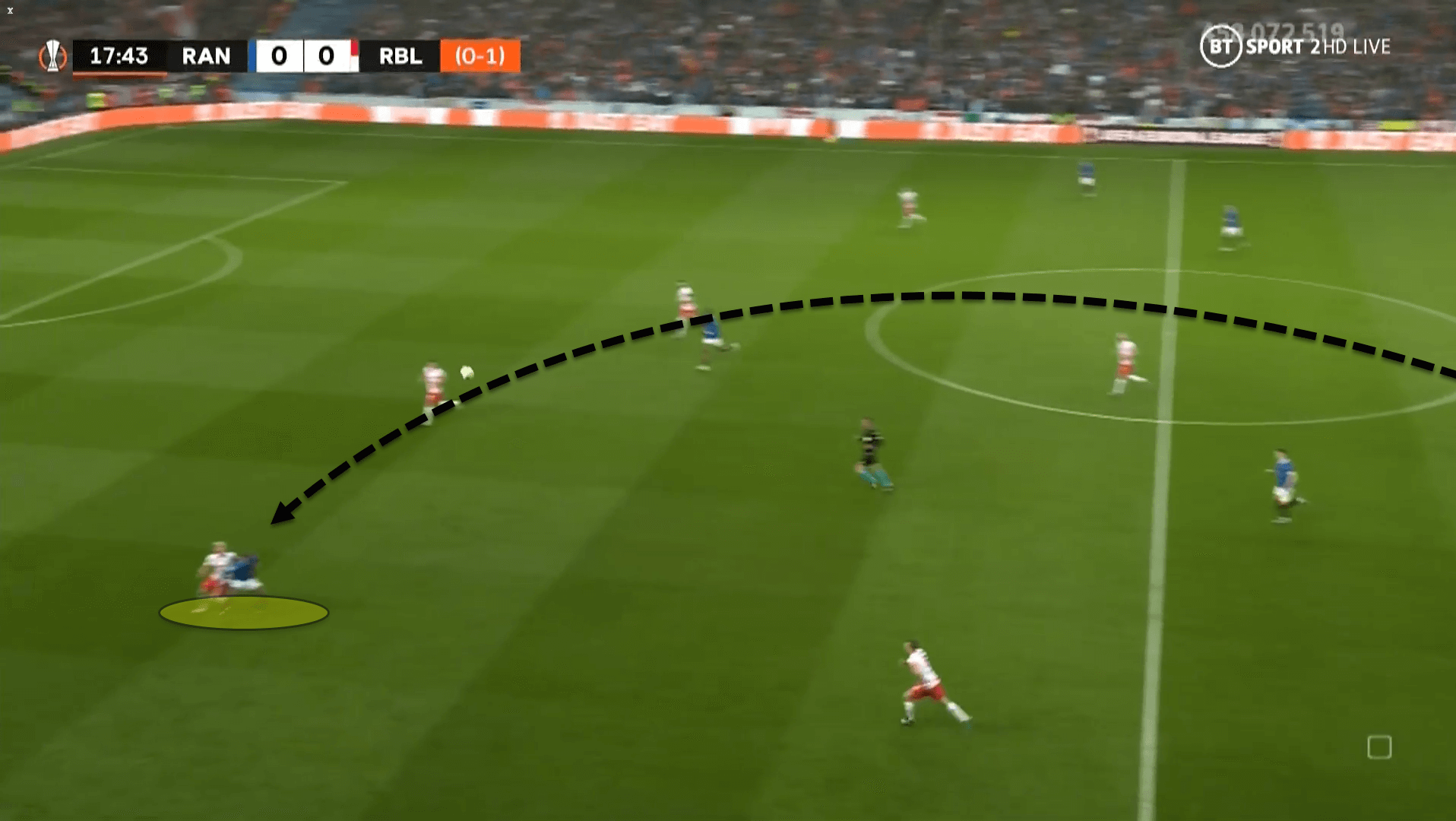 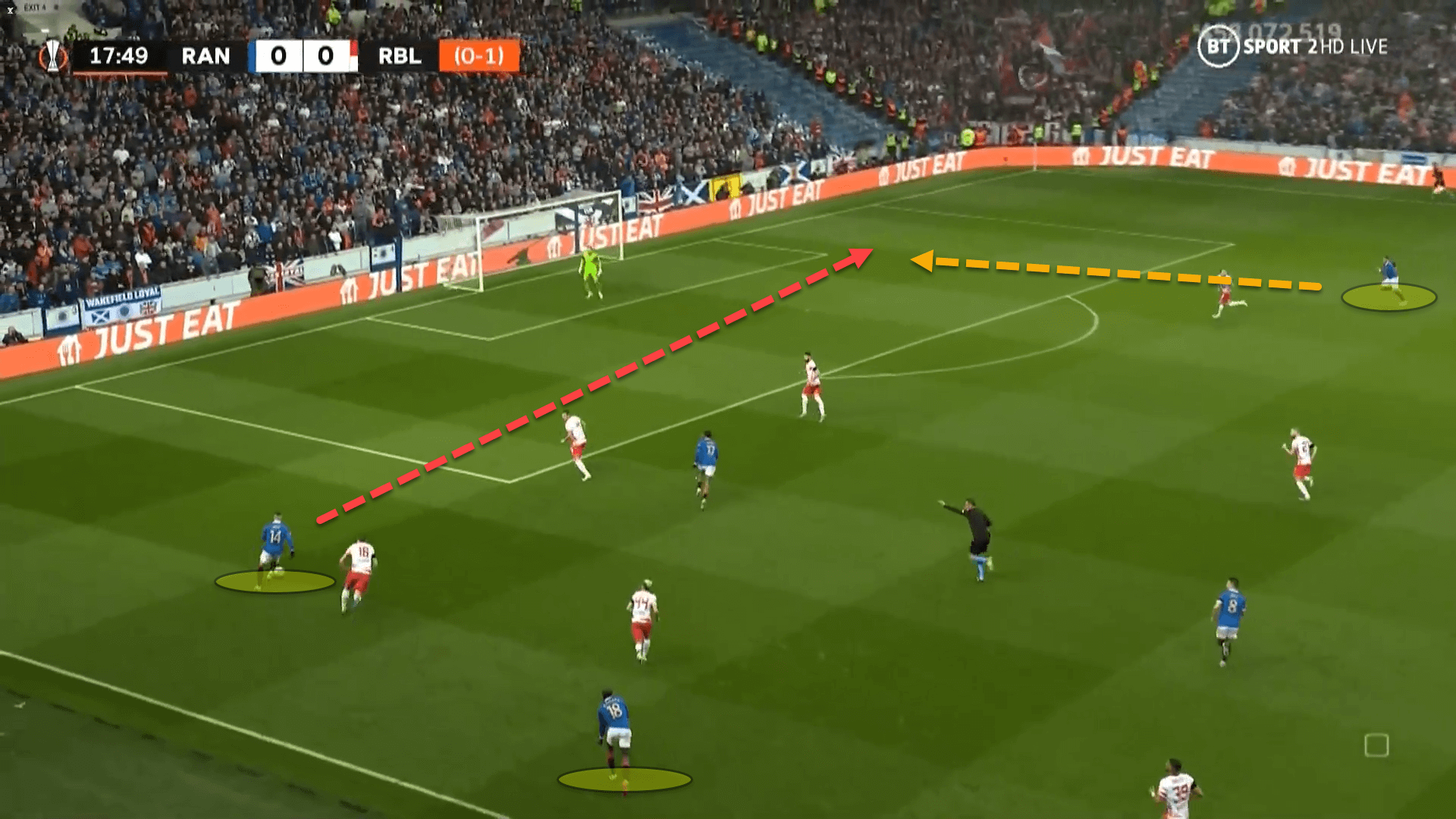 Rangers’ backline tried to find Kamara who was darting in between Klostermann and Willi Orbán while being tracked by Kampl. The long ball fell short, but Kamara contested it in the air with Kamara, flicking it behind for Kent who latched on, before shimmying inside and playing it across the box to James Tavernier who poked home the opener.

The Ibrox burst into pandemonium, a deafening sound that would wake the dead. A goal from a long ball situation played a massive hand in sending Rangers into a European final – Scottish football heritage in its purest form.

As explained previously, Rangers and Leipzig both defended in a similar manner, especially in the first 45 minutes. However, Rangers went about it slightly differently. Instead of having the front three block off passes into Leipzig’s double-pivot, the Gers went man-for-man in the midfield instead. 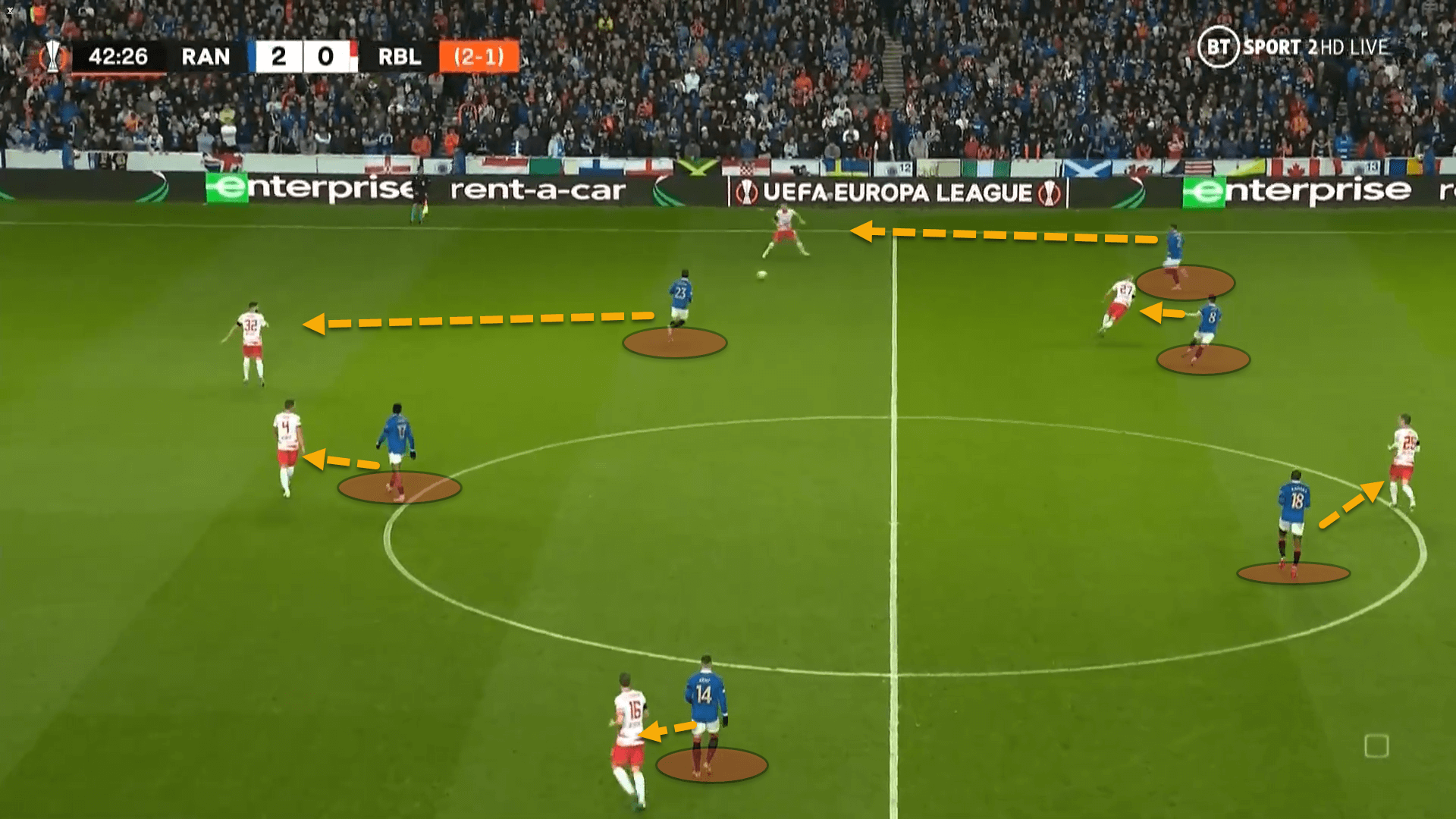 Van Bronckhorst’s reasoning for deploying a 5-4-1 in this tie was because the system matches up perfectly against their opponents. Where certain Leipzig players defended zonally, Rangers were strictly man-for-man while sitting in a high and medium block, and the matching up of formations facilitated this perfectly.

The Light Blues were far more proactive in this matchup too in comparison to the first leg. To say Rangers were passive in their defensive approach in that 1-0 defeat in Leipzig would be an understatement.

In the first fixture, the Gers accumulated a PPDA of 26.72 compared to 8.79 at the Ibrox, meaning they were allowing Leipzig to play roughly 18 passes less per defensive action in the second leg.

Throughout the first half, Rangers chased every ball, pressing in unison, being spurred on by the unruly crowd to try to force Leipzig into mistakes. Their man-oriented approach led to the second goal from a high press, beating the Germans at their own game. 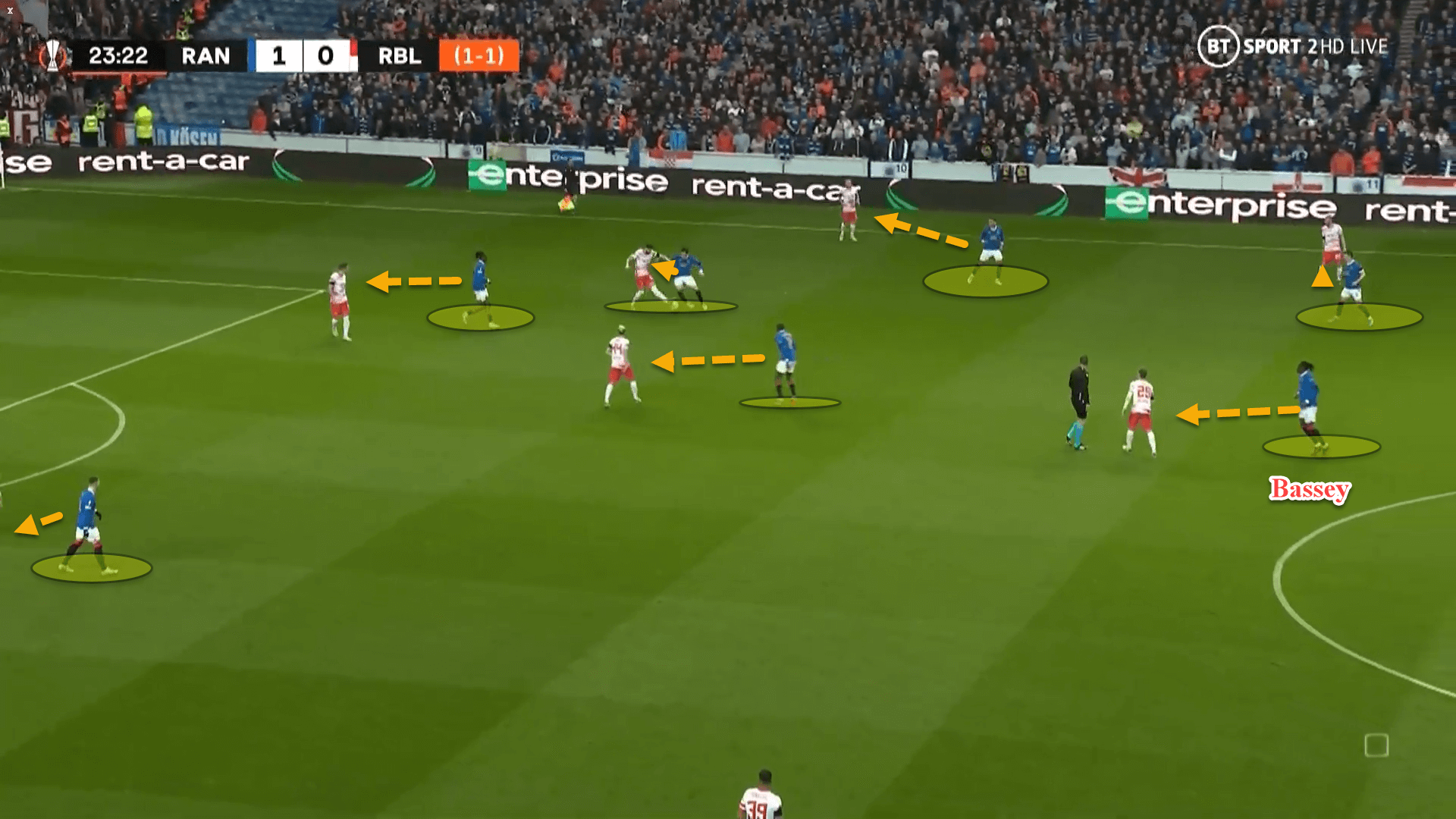 Wright applied pressure to Joško Gvardiol on the ball. The young Croat came inside on his weaker right foot before losing possession to his aggressor. The play developed further and Kamara drove it into the bottom corner just seconds later to bag Rangers’ their second goal.

Given Rangers went man-for-man, especially in the middle of the park, one might wonder how van Bronckhorst dealt with Olmo, Nkunku and Poulsen constantly dropping deeper. The answer is that the centre-backs had to follow them into high areas of the pitch, as can be seen by Calvin Bassey’s tight-marking of Olmo for the goal.

In possession, Leipzig’s game plan involved trying to play to the feet of Poulsen because of the great Dane’s ability to hold off defenders with his back to goal. Tedesco’s side would then be able to use the third-man runs of Nkunku or Olmo to break through Rangers’ backline. 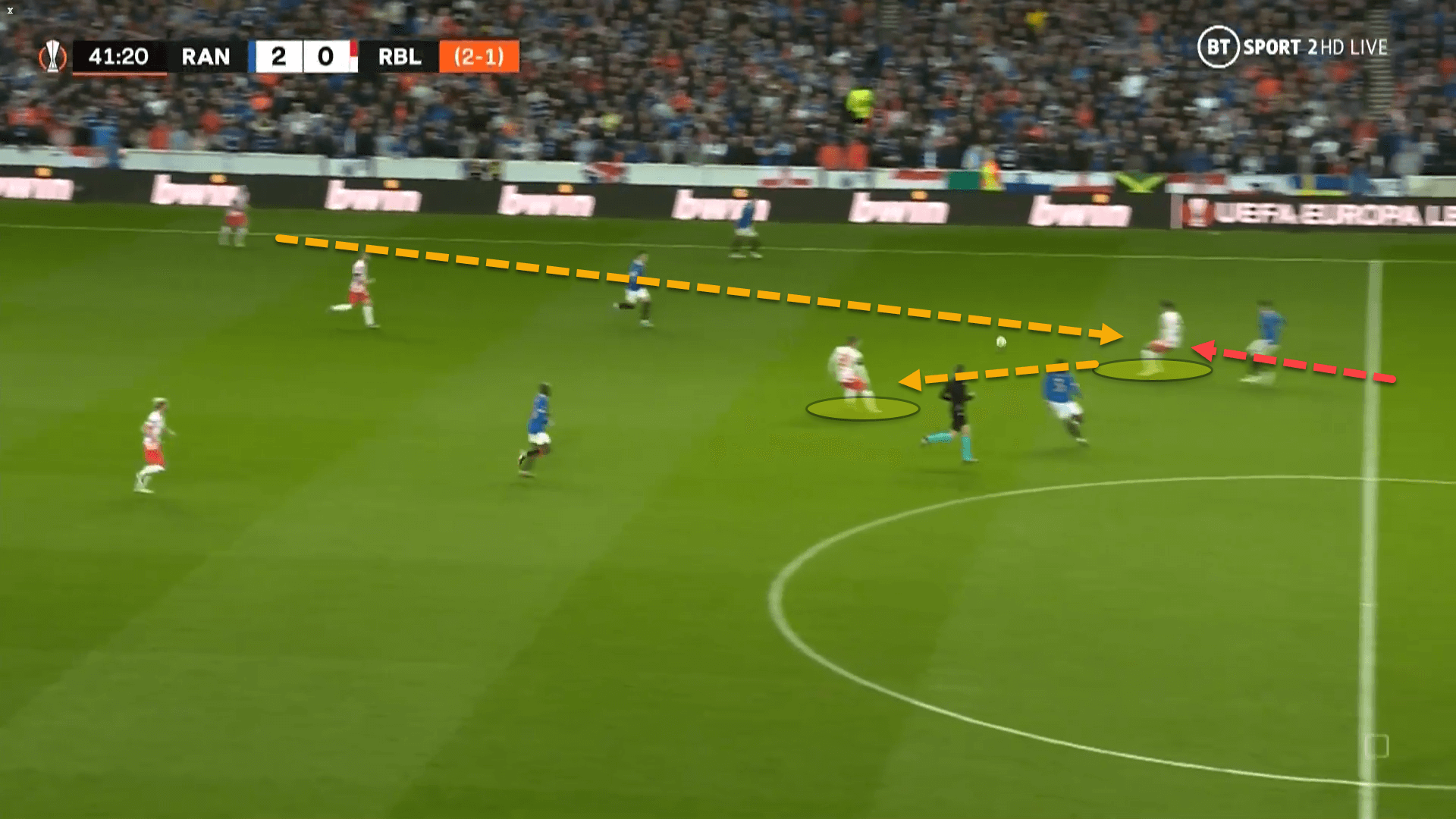 The team’s overall play on the ball was very direct, regardless of whether this was intentional, to get it up to the target man as quickly as possible, or if Rangers’ tight man-marking approach caught them off guard tactically and so they were forced to do so.

Looking at Leipzig’s progressive passes on the night, the passing links with the strongest connections were from the backline straight to the forwards. 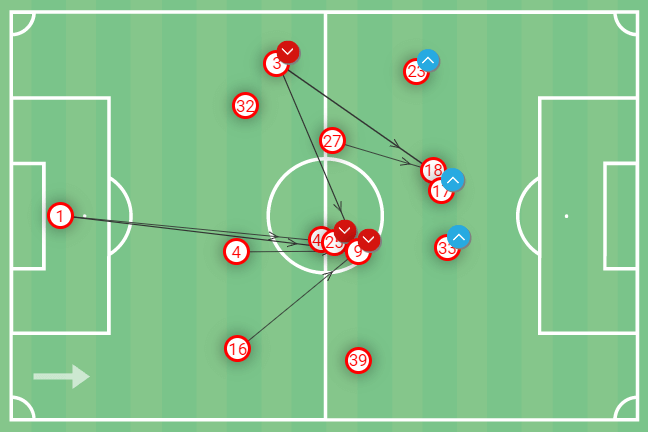 From the data visual displayed above, it’s also important to note just how deep Poulsen was positioned on the night, with his averaging positioning being in such close proximity to the double-pivot.

By the second half, Rangers dropped off massively with their intensity off the ball. The Gers did not press nearly as much and instead opted to defend in a 5-4-1 low block for large parts after the interval. 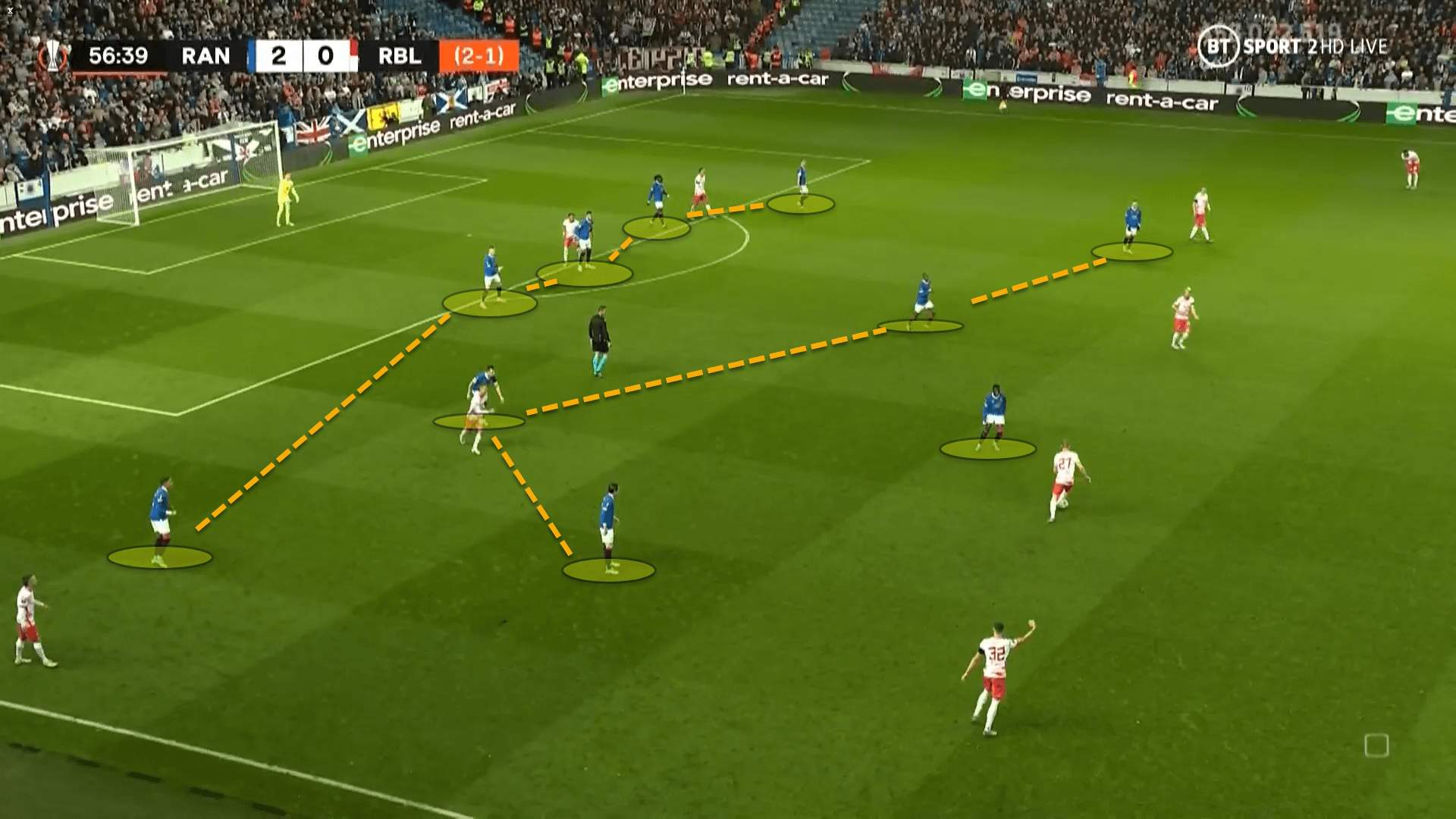 Interestingly, Rangers taking their foot off the pedal was what allowed Leipzig to get themselves back into the game. 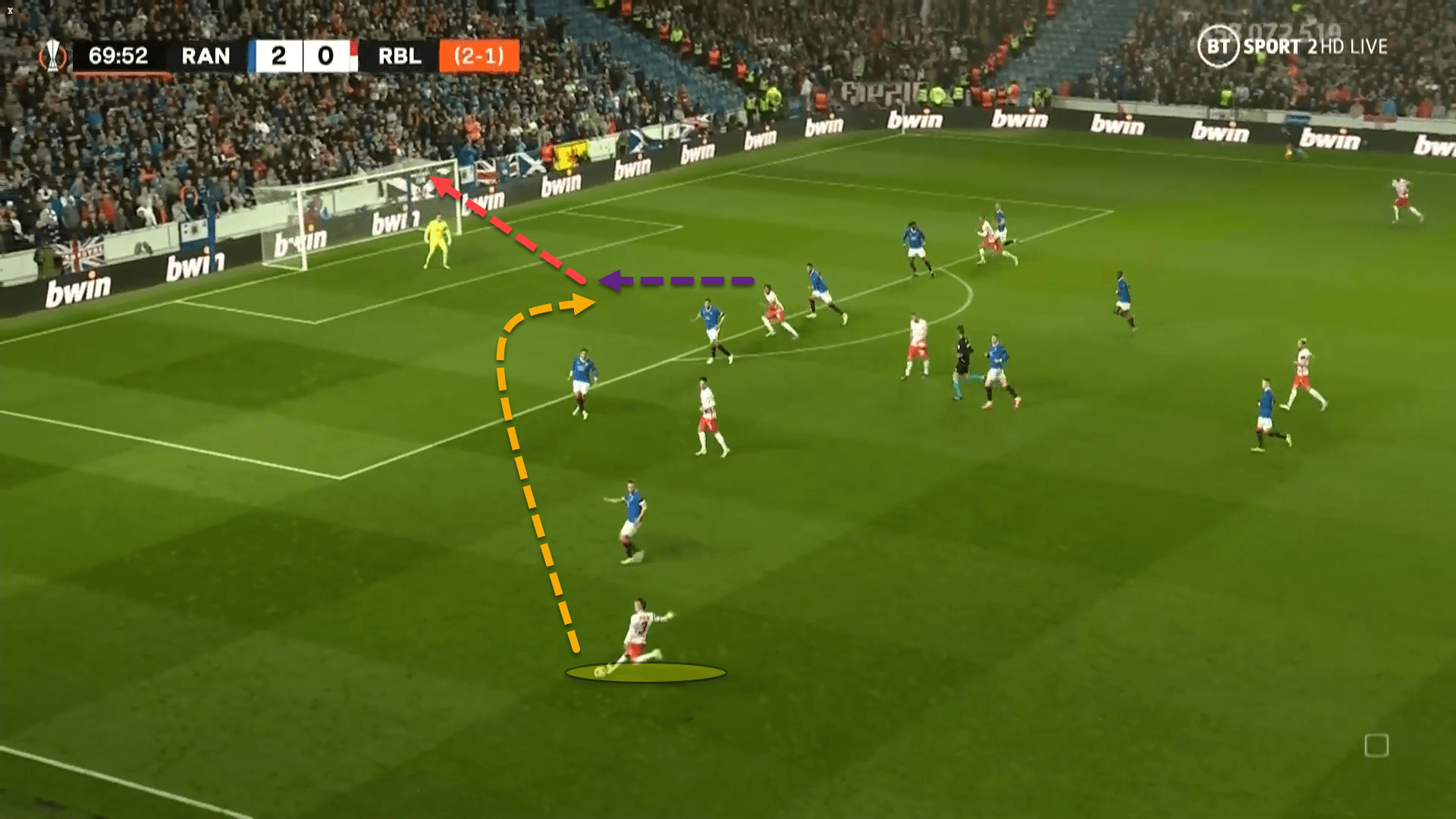 This isn’t an extreme criticism of the Scottish Premiership champions though. After battling against such a high-quality side for an extensive period of time, Rangers were bound to drop off a little.

However, van Bronckhorst will undoubtedly have been frustrated by his team’s inability to close down Angelino in possession, giving him the license to whip a superb ball into Nkunku who shaped his run in behind expertly before finishing in a style that Karim Benzema himself would have been in awe of.

The stadium was stunned into stupefied silence after Nkunku’s top-notch finish. The dream may have been snatched from their grasp as Leipzig began to grab a foothold in the game, piling forward with wave after wave of attacks.

For the first hour of the game, Leipzig played like eleven deer caught in the glimmering headlights. After Nkunku’s strike, the wounded deer clapped back, battling for their lives.

However, Rangers did not succumb to the pressure. Nobody was going to steal their dream right from under them. In the 81st minute, Lundstram made his way into the box, latching onto the end of a cross that Leipzig failed to defend properly to grab the winner, sending the crowd into a state of blissful rapture that ruptured throughout the legendary ground.

Rangers are now through to the final in Seville and, despite the league not being mathematically over in Scotland, van Bronckhorst and his players will certainly have one eye on Frankfurt. While Celtic still have the memories of Jock Stein’s Lisbon Lions from 1967, Rangers can finally put their own mark on European history in less than three weeks’ time.