The EFL has been the platform for many of the current Premier League and European stars to start their careers. Of Gareth Southgate’s England EURO 2020 squad, 22 players had at some point in their careers played in the EFL, usually at the start of their careers. That is a remarkable statistic and demonstrates how strong the lower tiers of English football are. Last week we conducted an analysis of current EFL Championship player Brennan Johnson and how he is bound for the Premier League after an impressive season.

Another young player who has had an impressive season in the EFL is Scott Twine of MK Dons in the EFL League One. The 22-year-old Englishman recently won EFL League One player of the season and is being heavily rumoured with a move to Nottingham Forest this summer but there has been the mention of Premier League clubs like West Ham United. In the last game of the season Twine scored four goals and has a reputation for his dead ball and long-range goals but he offers much more than that which we will delve into in this analysis.

This tactical analysis and scout report will provide a deeper look into his performances and the key attributes that have allowed him to be so converted but also identify any areas that may need to improve in order to take the next step.

Twine is a versatile attacker with the ability to play as an inside forward, striker and number 10. Under Liam Manning, MK Dons have been a tactically flexible team but usually deploy a 3-4-3 or 3-4-2-1 tactic, where Twine will usually play on the left of Troy Parrott the Tottenham Hotspur loanee. Below will show Twine’s heat map from this season, which shows him to spend the majority of his time wide left and in the left half-space. 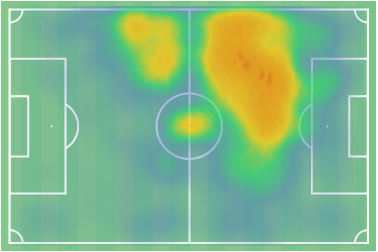 Twine is a technical player, who thrives off getting between the lines and making passes in behind the opposition defence and making the attacking play tick. If Twine is going to take the next step he will probably be used as an inside forward on the left with the ability to play as a number 10 if this is tactically available. It makes sense that he has been heavily linked with Nottingham Forest as he would fit in their 3-4-1-2 system with the ability to play up front as a second striker or as a number 10.

As always with these scout reports, we will take a look at some of the metrics that the player is performing well in, with the hope of measuring their performance against similar players in the league but also understanding more about their key attributes and playing style.  The below graphs show Twine against fellow EFL league One attacker with over 1500 minutes for their club this season. 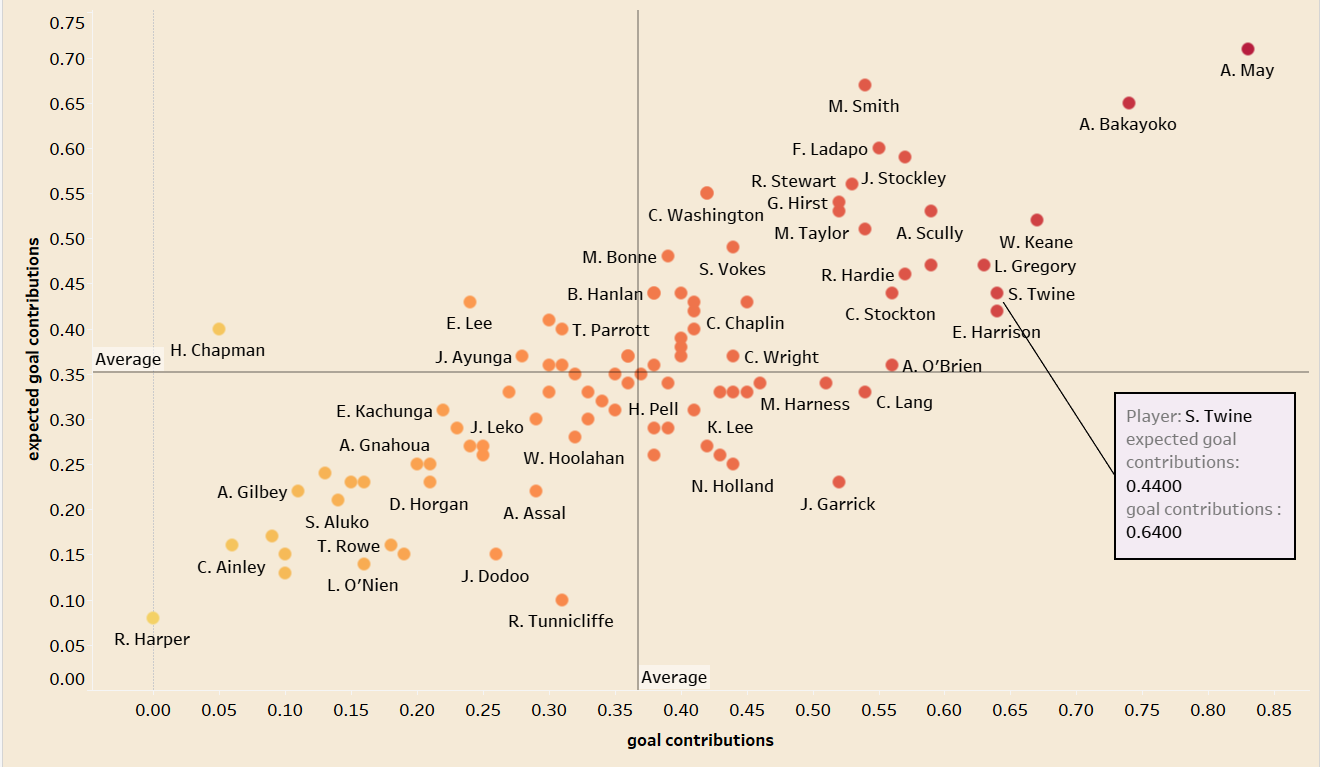 Twine outperforms both his XG per 90 and XA per 90. This season he has managed 0.23 assists from an XA per 90 of 0.17, in addition to 0.41 goals per 90 from and XG per 90 of 0.27. Twine significantly outperforms his XG which can largely be attributed to his free-kick and long-range shooting ability. Below shows Twine’s shot map of his last 75 attempts on target. 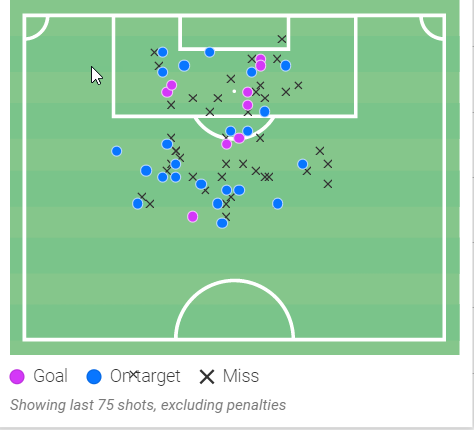 As you can see Twine has scored three goals from outside the box in his last 75 shots, which is impressive with one being from around 30 yards out. This has been consistent all season with Twine and explains why he is one of the biggest outperformers of their expected contributions, shown below. 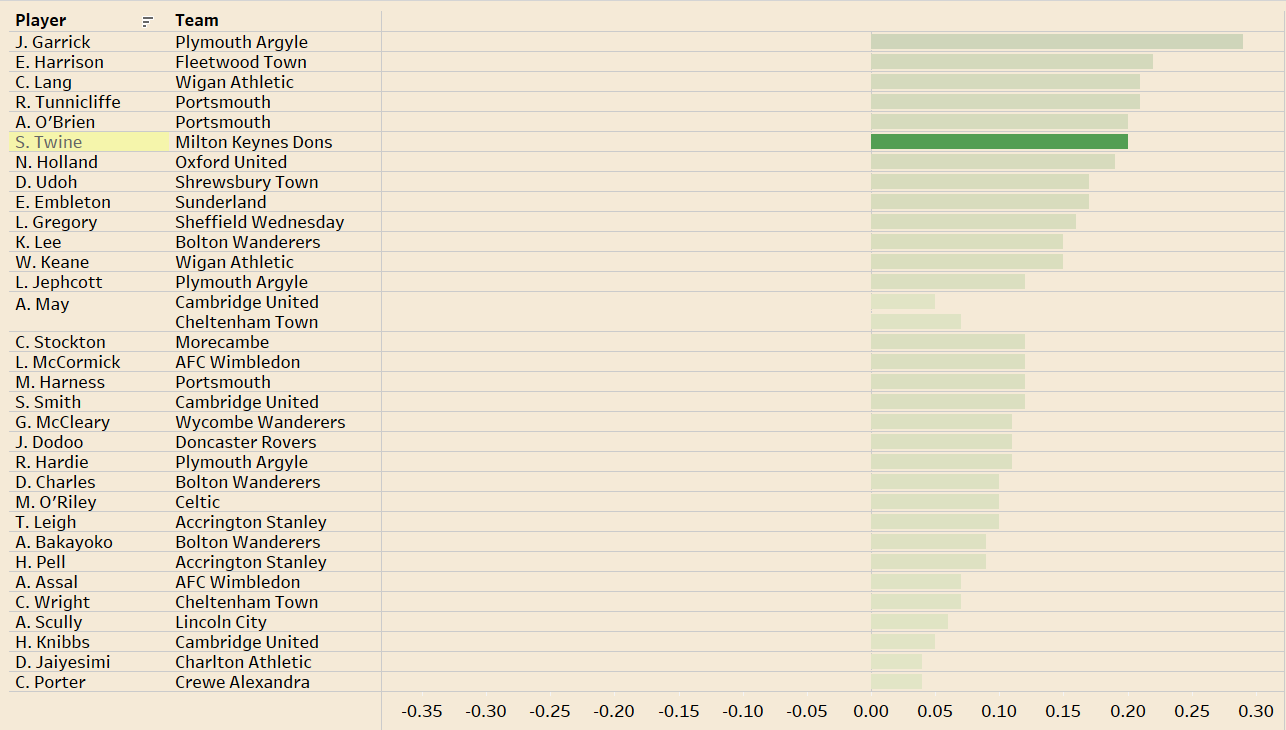 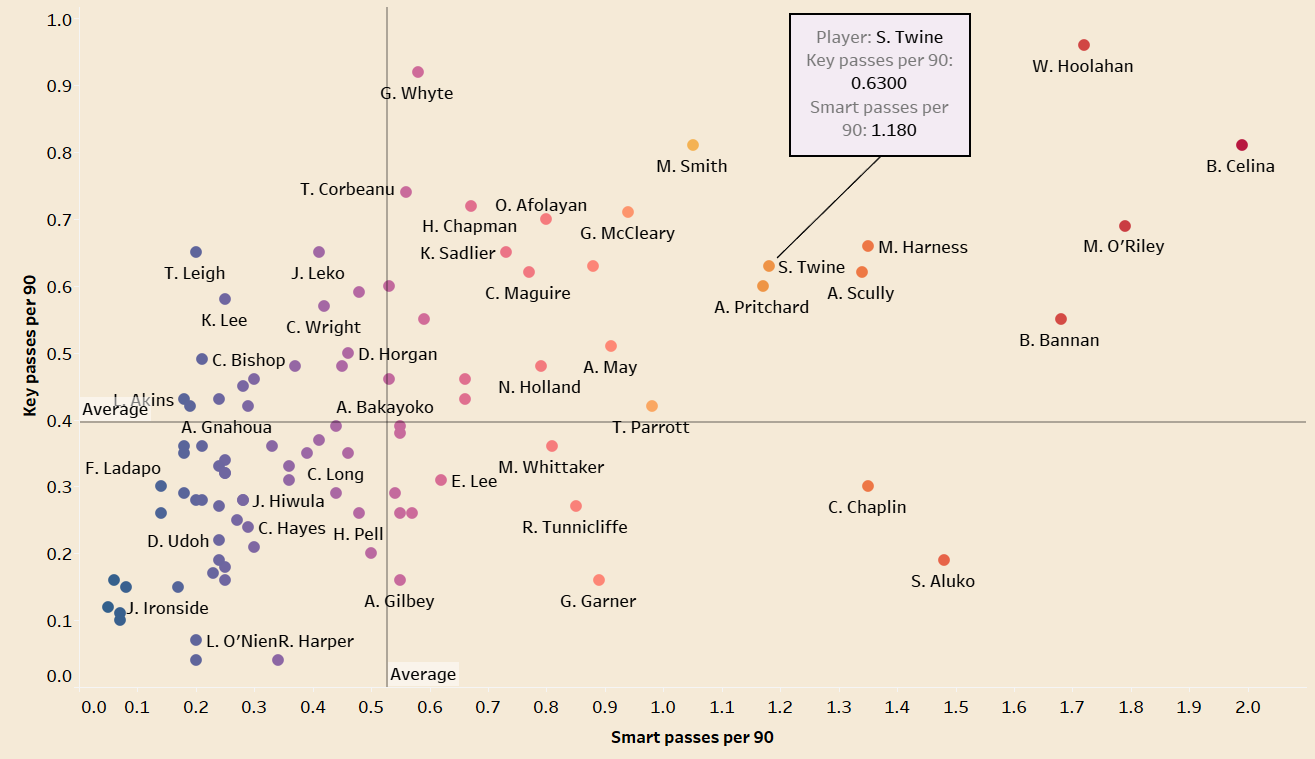 As you can see above Twine is one of the league’s top performers and this can be reaffirmed by looking at passes to the penalty area and through balls per 90, which also measures a player’s creative contribution. 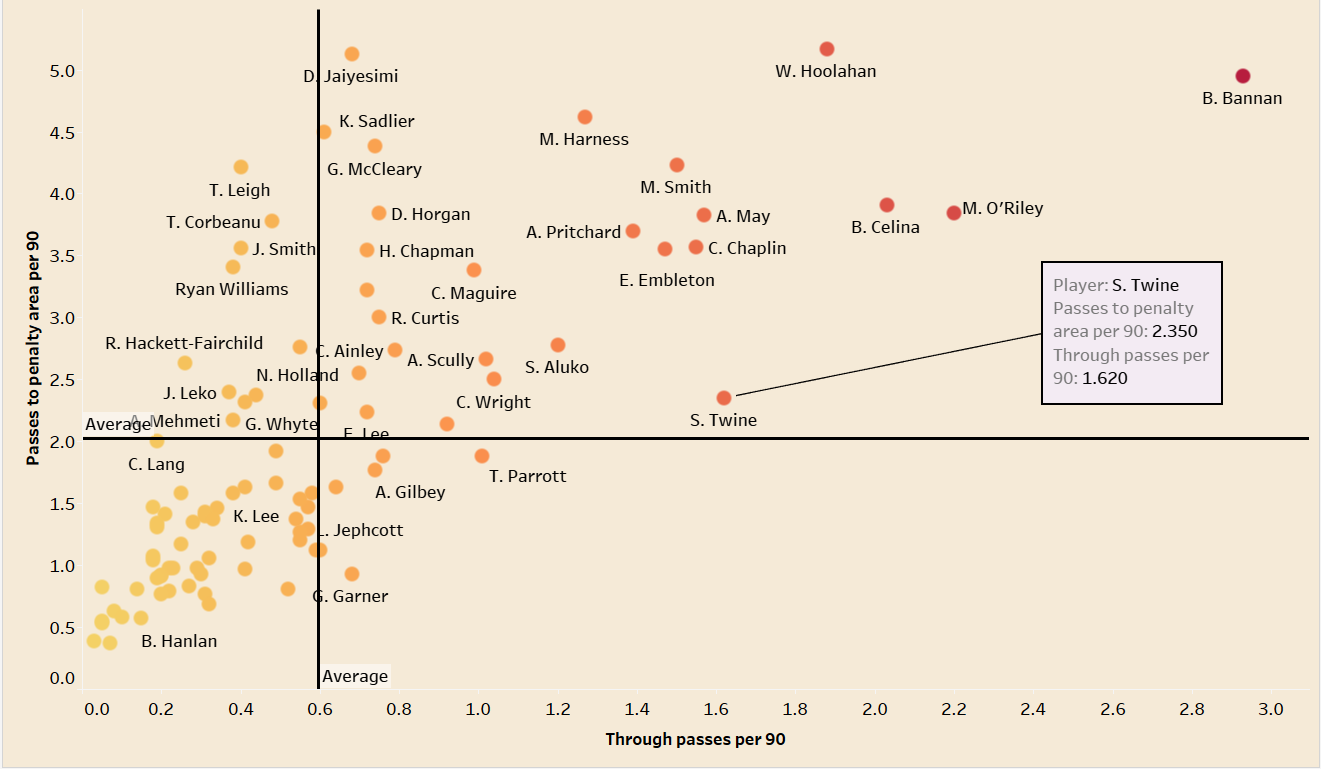 Again, Twine is amongst the top performers in the league. The final data metrics we will look at are ball progression in the form of progressive passes per 90 and progressive runs per 90. This isn’t usually something strikers and attackers excel at, however, with Twine he is slightly different due to the role he plays in the MK Dons build up. 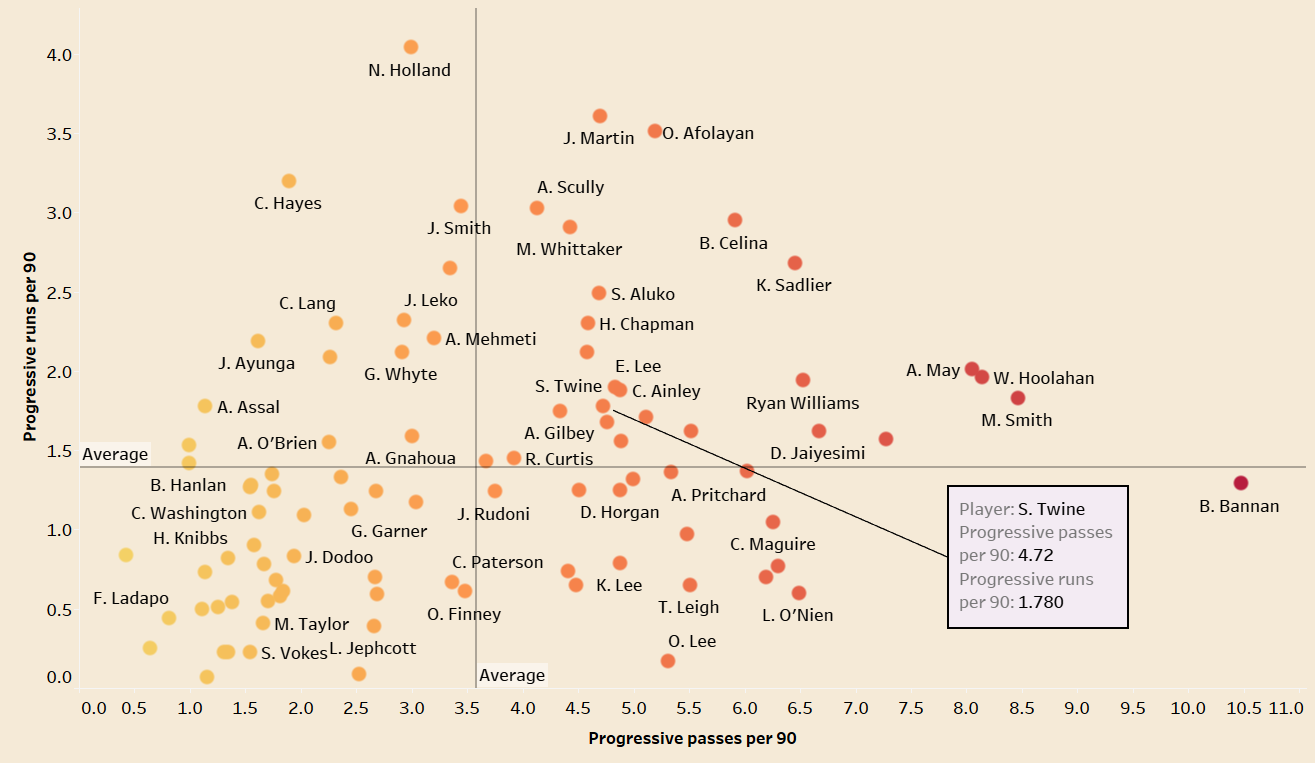 Twine uses a combination of progressive passes with 4.7 per 90 and progressive runs with 1.78 per 90. Both are above the average for attackers in League One and highlight how Twine can effectively help his team advance up the pitch and closer to goal.

In this data analysis section, we have briefly touched upon Twine’s performance in some attacking metrics with a particular focus on his goal contribution. As well as establishing that he is one of the best attackers in the league.

Getting between the lines

One of Scott Twine’s greatest attributes is his ability to get between lines and help orchestrate the attacking play. This is something he does when either playing on left, drifting inside into the left half-spaces and when playing as a second striker he will drop into a number 10 role when MK Dons are in possession. Below we will demonstrate a couple of examples of Twine doing this.

This first example comes against Accrington Stanley and as you can see Twine is dropping into his own half to get on the ball. 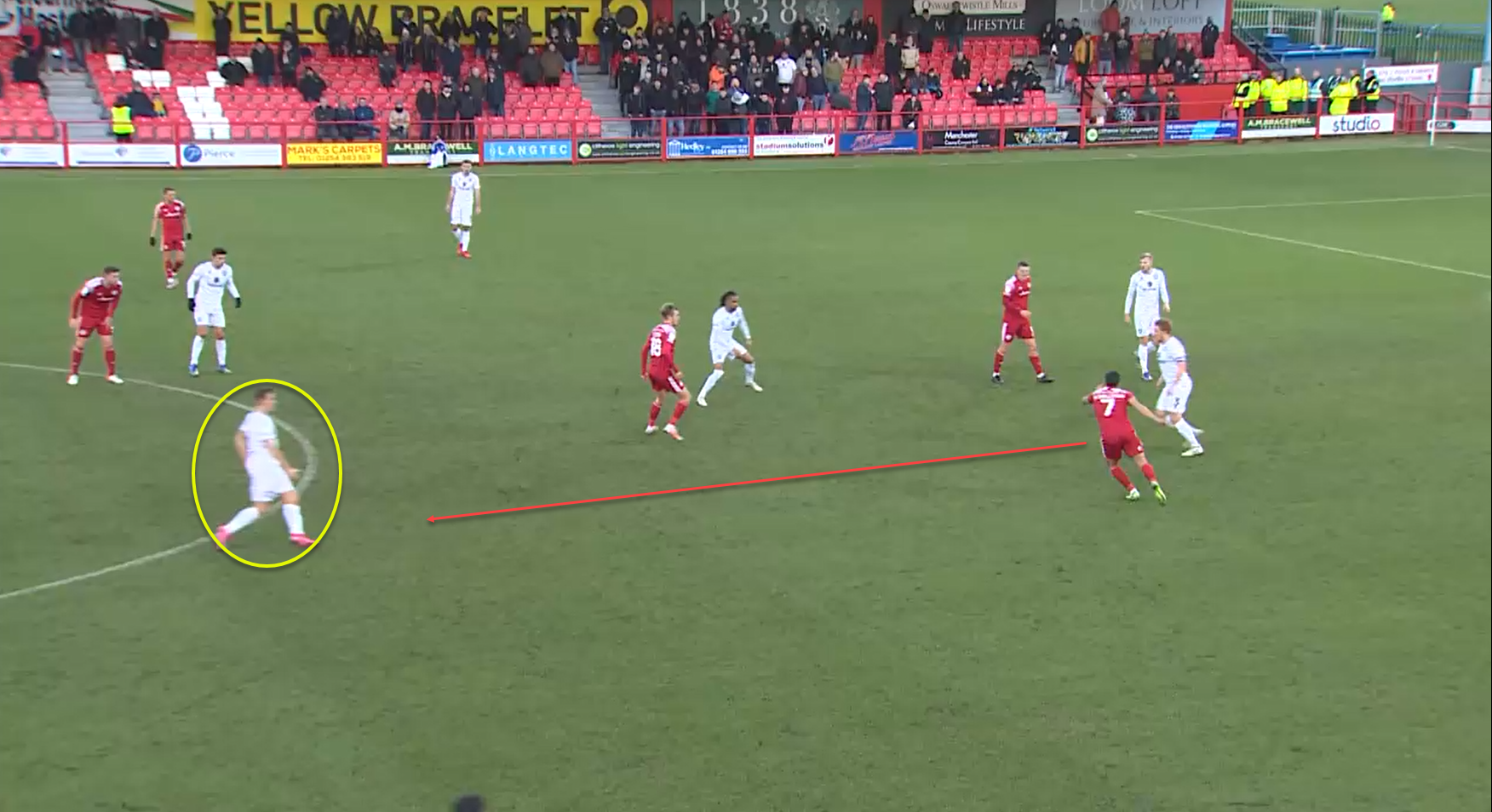 Twine has received the ball and anticipates the opposition defender and rolls him into the highlighted space.

After turning the Accrington Player, Twine immediately releases a pass for one of his fellow attackers, who runs in on goal.

The next example shows Twine doing this but in the more advanced stage of the attack. As you can see Twine is getting between the Plymouth defensive line and midfield block. The MK Dons left wingback is going to play a pass into Twine’s feet.

When the ball comes to Twine he receives pressure from one of the Plymouth defenders. He cleverly uses this to his advantage and plays a brilliant first-time pass over the defensive line into the space left by the defender.

The pass isn’t gathered by the Mk Dons attackers but also shows the quality Twine has and also his ability to manipulate the space.

Hopefully, both of these examples show how Twine uses the space between defensive lines and also the role he plays in the MK Dons build-up play.

Another aspect of Twine’s game that is important to the way he plays but also allows him to be so effective, is his ability to find space in tight areas, especially in the box. Twine excellently identifies and moves into pockets of space in and around the box and uses this to create chances or score goals. The following example shows Twine finding pockets of space to score goals.

Below shows MK Dons on the attack and Shrewsbury Town is defending deep in their own box. As you can see it looks like the MK Dons player on the ball is going to play a ball across the face of the goal. So Twine identifies the space shown in the box and drops into it and provides a cut back option for the man in the ball.

Now the man on the ball doesn’t make that pass and simply plays a pass inside to a fellow teammate. Now Twine doesn’t wait for the ball and with the Shrewsbury defenders pressing up, he decides to drop deeper into the highlighted space.

Twine manages to receive the ball and take a touch before firing a shot into the bottom corner and adding to his impressive goal scoring record for the season.

Twine’s ability to find space in tight areas is impressive but he also combines this with clever runs that also manipulate space. Allowing him to be so effective in and around the box.

Hopefully, this analysis has given you a better understanding of Scott Twine, his quality and the attributes and traits that allow him to be so effective. Twine is a versatile attacker who can occupy a variety of different attacking roles due to his skill set and attributes. He is certainly a name you will be hearing more whether in the Premier League or the EFL Championship as his quality will inevitably take him up the pyramid.