The 26th game week of the 2021-22 EPL season saw defending champions and league leaders Manchester City host Tottenham Hotspur at the Etihad stadium. The match lived up to the Conte-Pep tactical battle hype with the Italian’s side managing to produce one of the finest displays of the season and clinch three points against their opponents.

It was a roller-coaster experience for the fans which replicated the games between the two sides in the previous seasons and also featured some interesting tactical approaches and shifts from both the teams.

This article features the tactical analysis of the game and discusses the tactics used by both the teams and how Antonio Conte managed to get one over Pep Guardiola. Let’s begin the analysis.

Manchester City made two changes to the lineup that beat Sporting CP in the last midweek with Riyad Mahrez and John Stones making way for Ilkay Gundogan and Kyle Walker respectively. 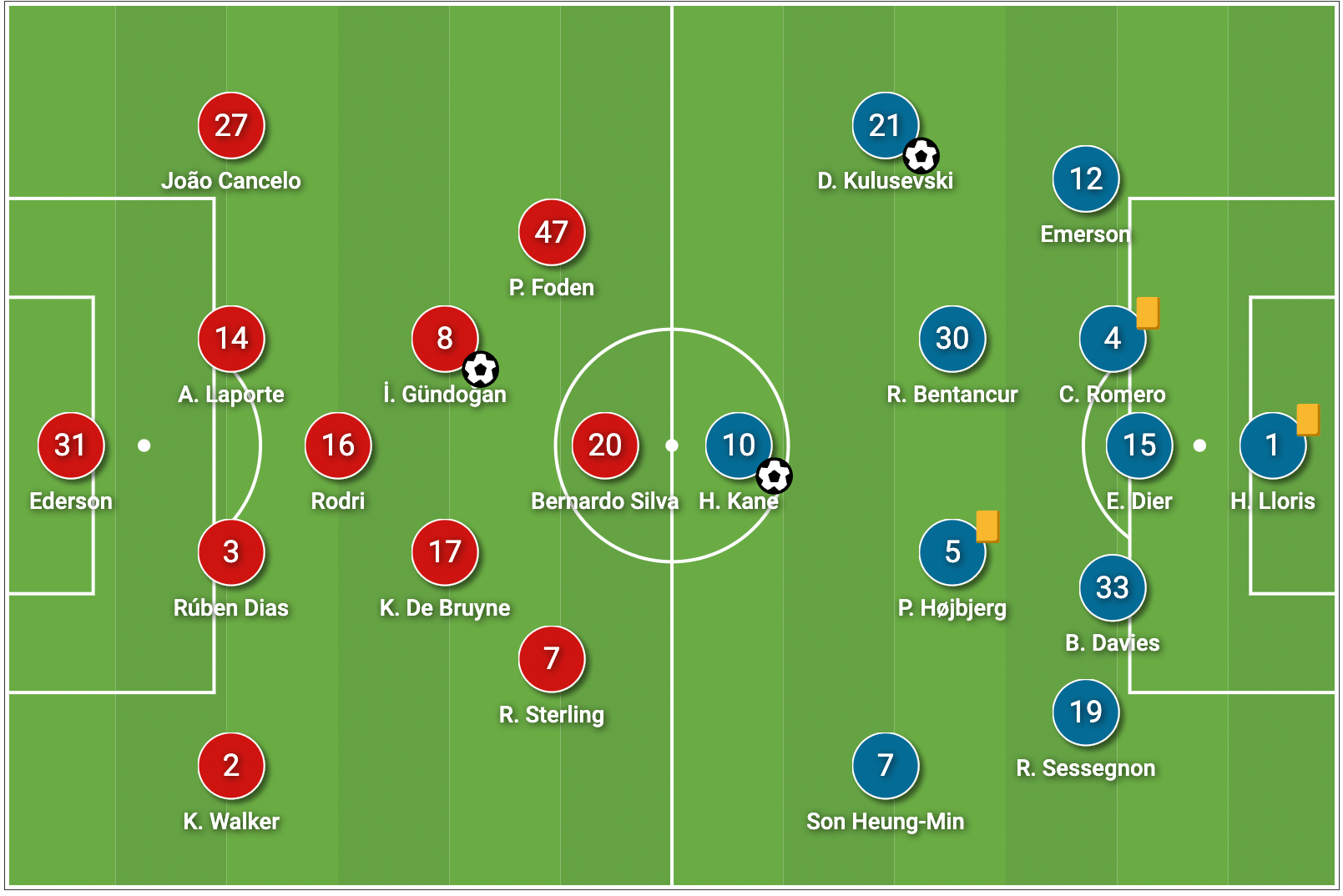 Antonio Conte meanwhile, made four changes to the lineup that was defeated against Wolves with Kulusevski making his first start for the club instead of Lucas Moura and Eric Dier, Emerson Royal and Hojberg being drafted into the lineup for Davinson Sanchez, Matt Doherty and Harry Winks.

Antonio Conte’s reign at Tottenham have so far been mixed where the Italian has shown some signs of improving the squad with a proper tactical plan and blueprint while there were results and performances where it was seen that the squad still needs time to get them adapted to his needs. But at Etihad, it was clear from the first minute that they were ready to execute the tactical plan.

Conte’s teams have always been associated with rigid patterns of play in possession that helps his players to break down teams looking to press high in a much simpler fashion. The basic structure when they looked to play out from the back was a back-three being shifted to a back-four where Ben Davies would position himself in the left-back position while Sessegnon would be slightly higher than usual. This was similar to what he did with Inter Milan last year where Perisic as the left wing-back would position higher making the shape slightly lopsided than usual.

The sequence starts with Lloris playing the short pass to one of the centre-backs. This would mostly be the right-sided one where Spurs would look to underload the side and drag City to that side and then switch it to the far side where they can overload. 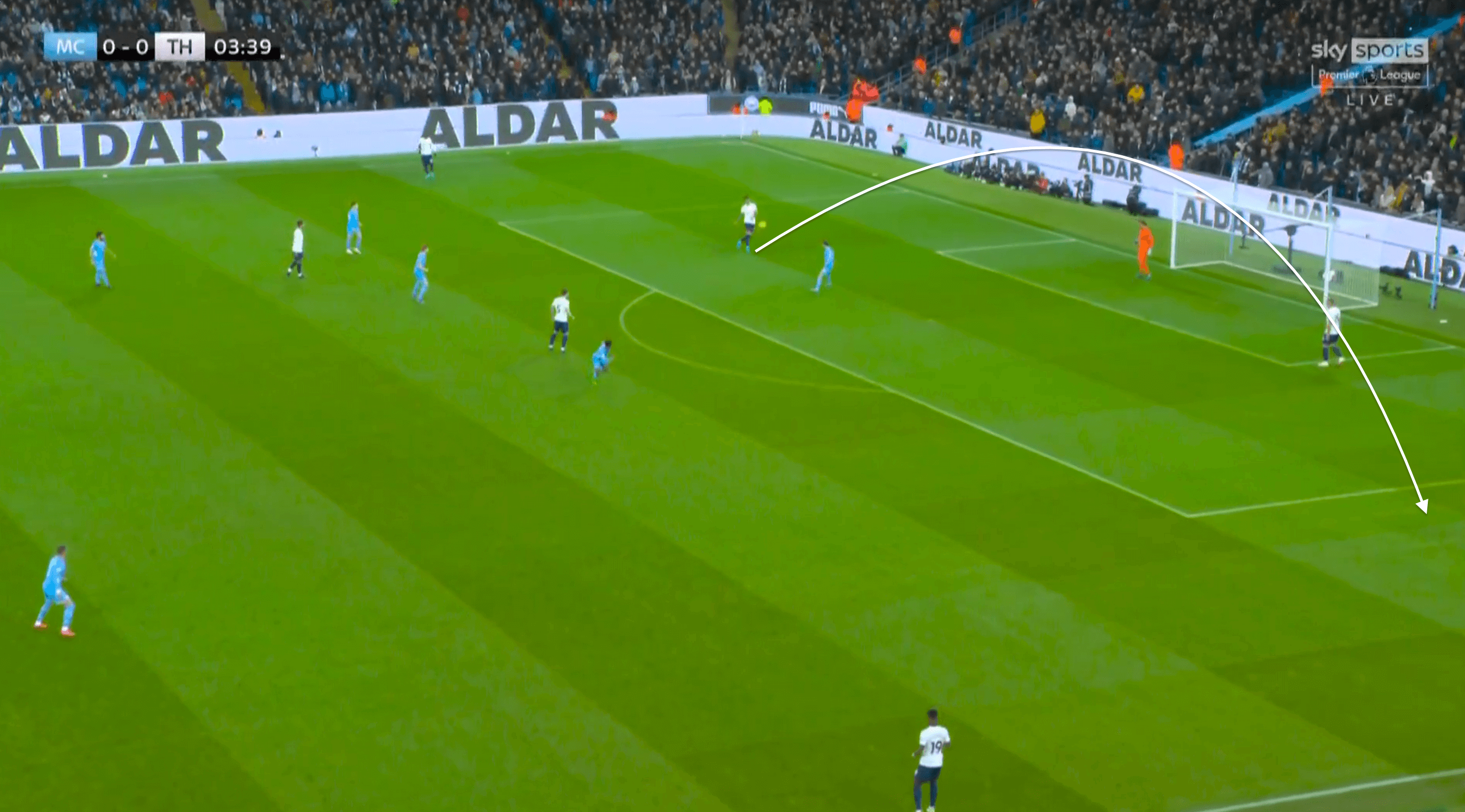 We can see that in the above image where City went with a 4-2-3-1 system where they are looking to press and compress the spaces in the ball side. The downside that City had with this was that they had to place Sterling to mark Hojberg and Spurs also had their CBs and WBs very wide making it very difficult for City to cover and press the entire backline. So this meant that the pass was wide open to the wide CB, Ben Davies, on the left side and he receives the ball with Sessegnon also ahead of him making it 2v1 against any City player who decides to press them.

Even if City committed a man to press Davies down that wing, the advantage for Spurs was that the City player would still be a little late to press Davies and that means that he can have the extra time to play a pass forward into the interior. 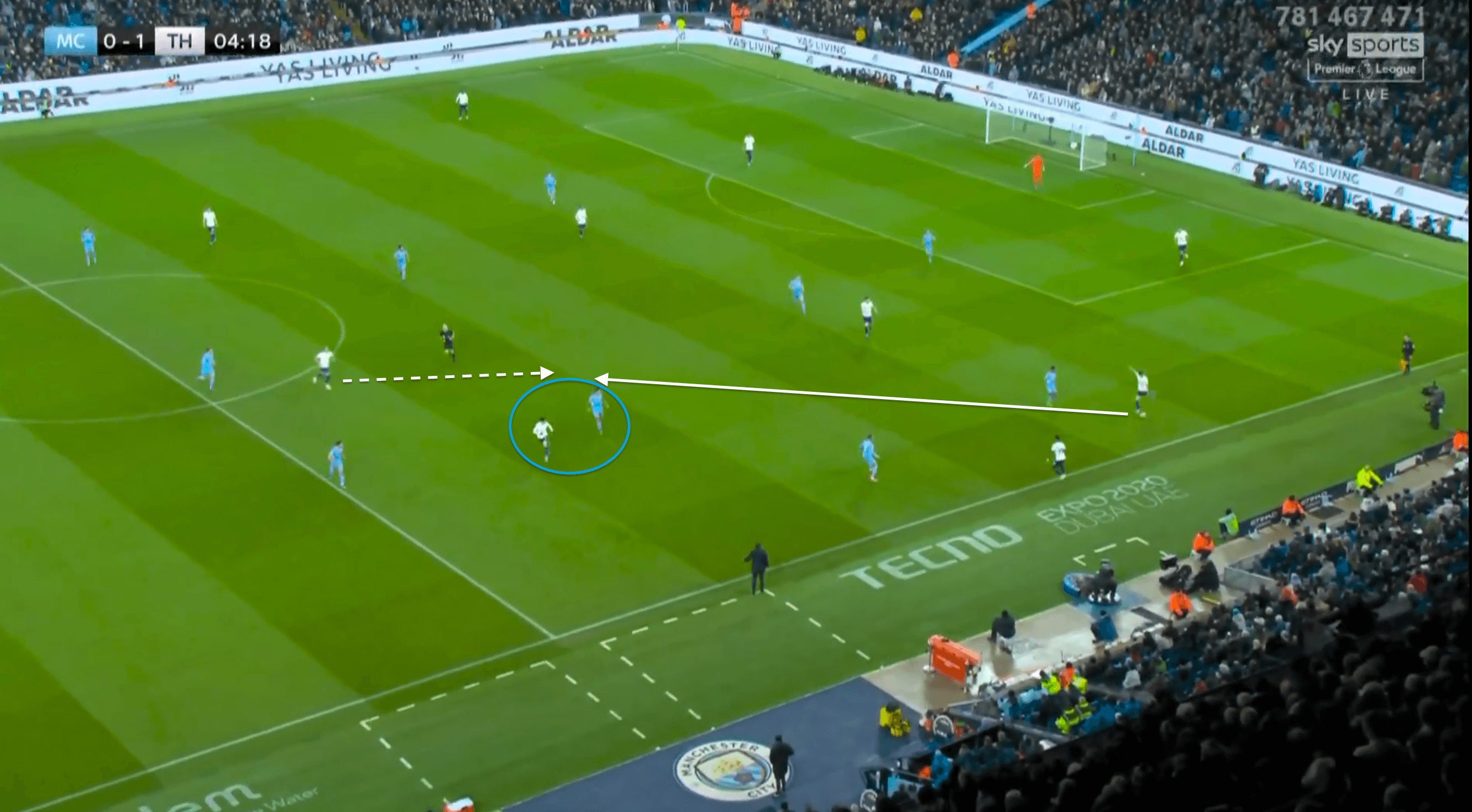 This is how it led to their first goal where City slightly got it right by having Sterling press Davies and shifting their block to the other flank quickly, but it was still delayed where Davies was able to find the time to pass it forward. Rodri was closely pinned by Son who made a run to drag Rodri from his position into which Kane would drop into and play a first-time pass to Son where Spurs scored from that. The whole sequence can be seen in the image above.

Spurs kept repeating the same process of finding the free man on the left side while starting to build from the right side. The players took good positions and were in very good shape when they received the ball allowing them to seamlessly play through the press. We can see that in the image below from them. 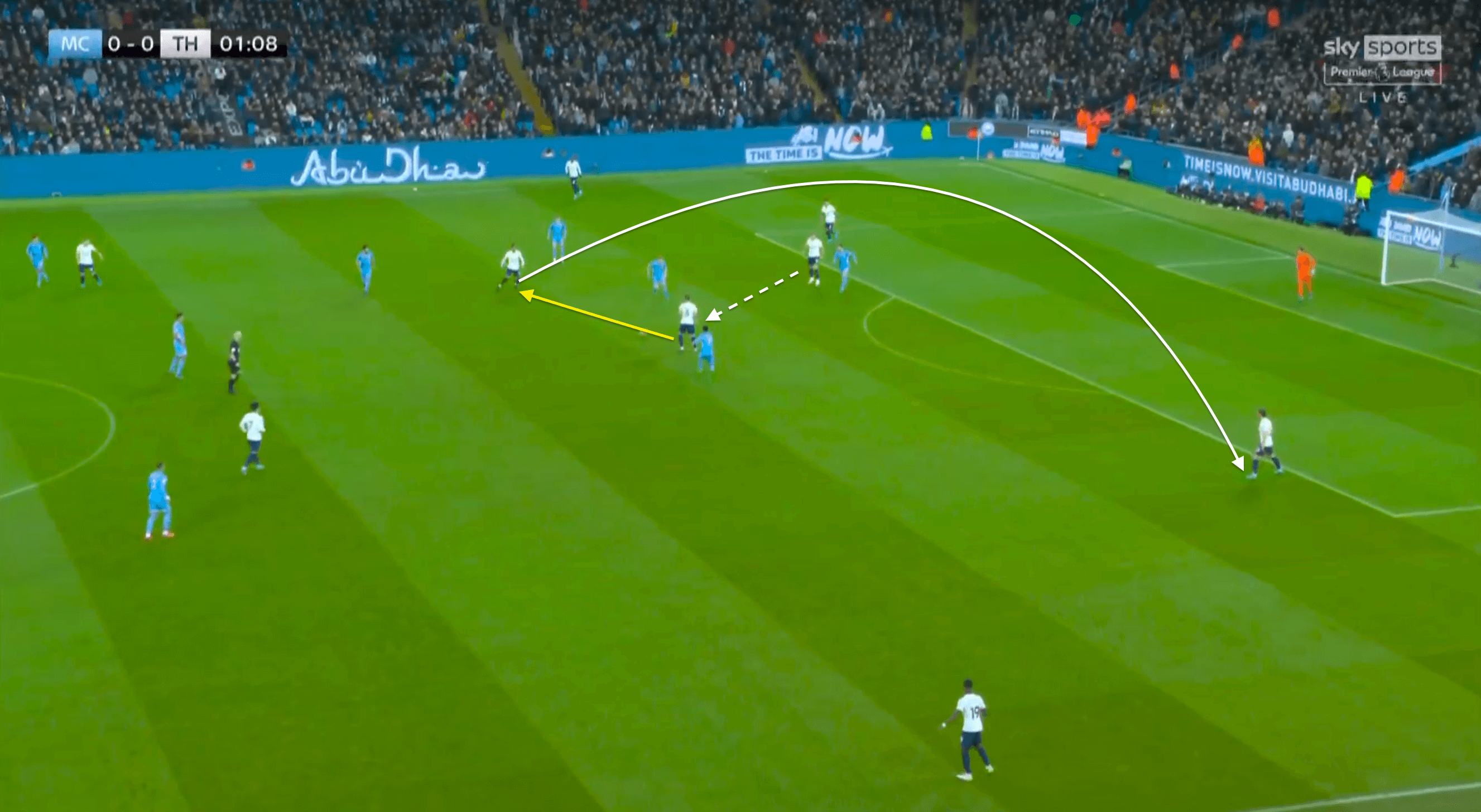 It was very evident that Harry Kane was very central to them then progressing the ball from the middle third to the final third. The talismanic Spurs striker was used consistently in possession where he dropped deep and found spaces very well to take that and do the playmaking duties for his side. His ability to play a wide range of passes with both of his feet was used well by Conte. We can see him switching the ball to the opposite flank where Spurs look to take advantage of space.

City had a huge problem in dealing with constant switches across the flanks from Spurs. Using a back four, they did not have the coverage across the width of the pitch that led to them being overloaded on the far sided wings numerous times. This was compounded with the full-backs actively and intensely pressing the wing-backs which meant that the whole block shifted to cover the subsequent spaces.

It wasn’t going to be very hard to guess as to who was going to dominate the possession and territory in the game. But the tactics used by either of the team and how Spurs will respond to City’s attack was always going to be the talking point. City’s 4-2-3-1 shifted to a 3-1-6 with Walker tucking into the back three to provide an extra cover in the transition while Cancelo moved higher up to join the final line. Rodri was the lone midfielder ahead of the defence. This can be seen in the image below. 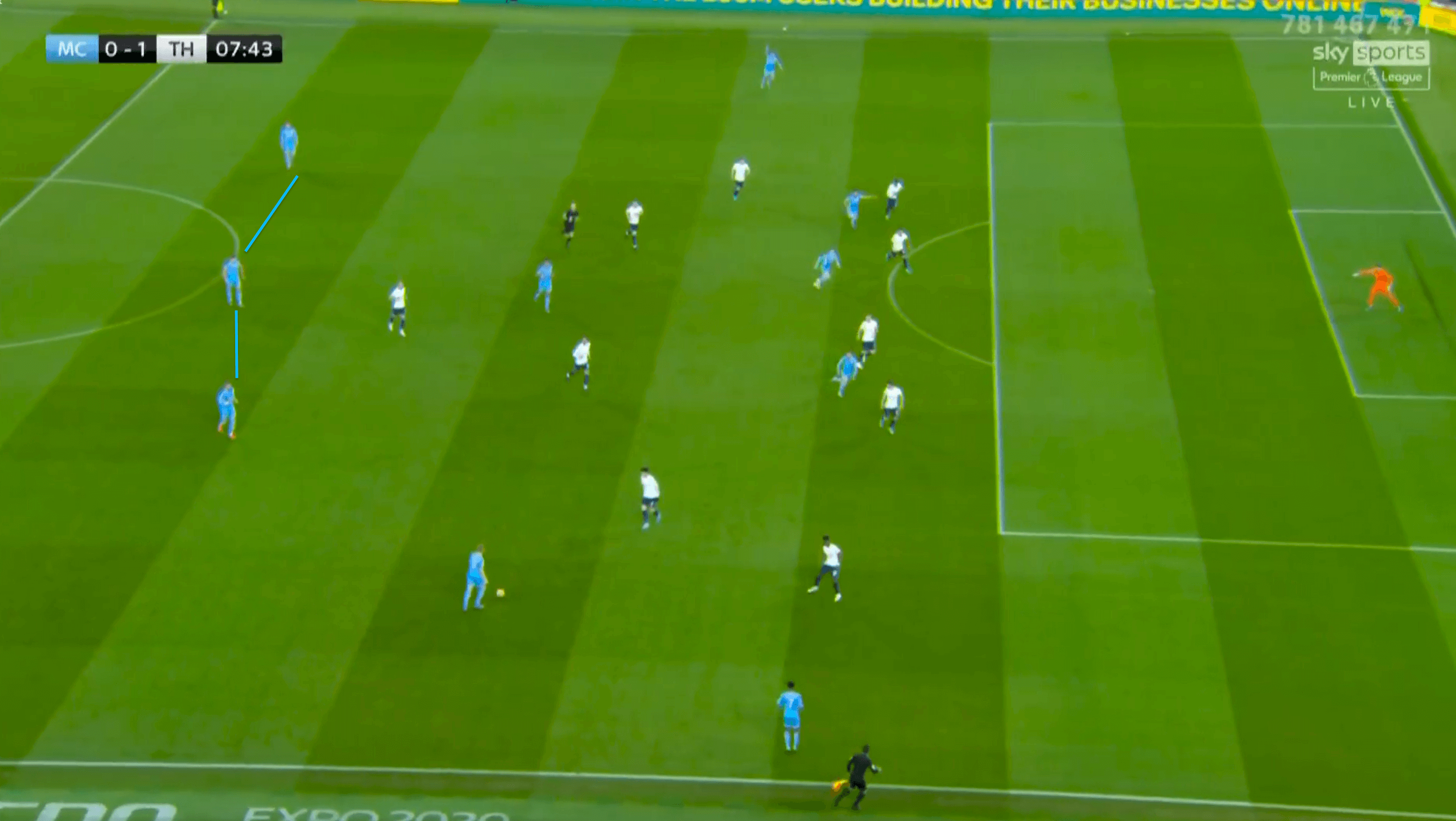 On the ball near side, one of the players from the final line will drop into the deeper half-spaces to ensure progression and also to keep an eye on counter-pressing Spurs if they lose the ball.

Spurs initially started with a 5-4-1 mid-block and then soon shifted to a slightly lower block after taking the initial lead. Harry Kane kept Rodri throughout the game in his cover-shadow while the four men midfield line consisting of the wingers stayed very narrow and central. 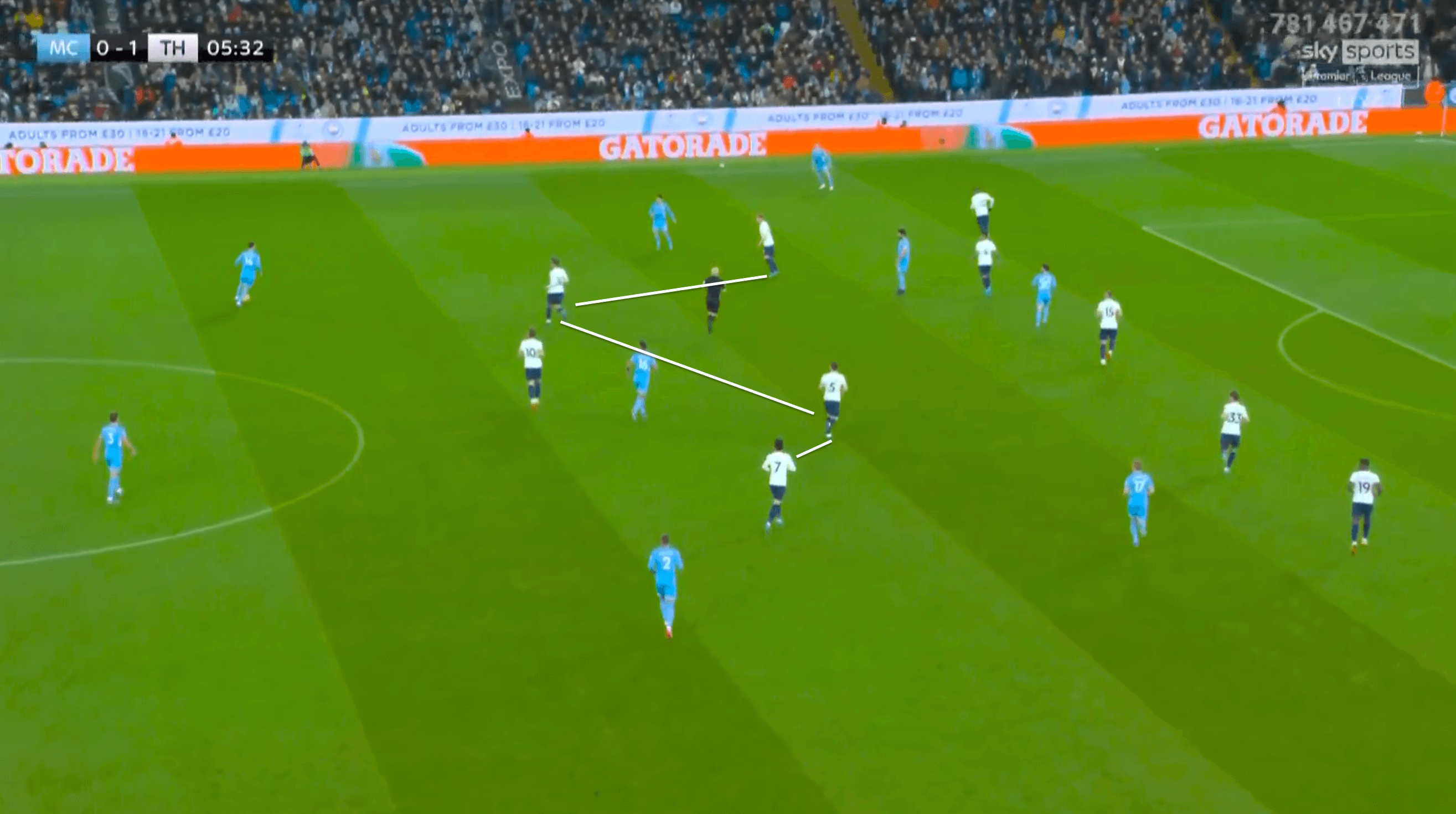 With City having a back three in possession and when the ball went to one of the wide CBs, Walker or Laporte, the Spurs central midfielder would press him forward while the winger on that side would slightly tuck in to cover the space partially. This was basically done to make sure that the likes of KDB and Gundogan do not get to create from the half-spaces. 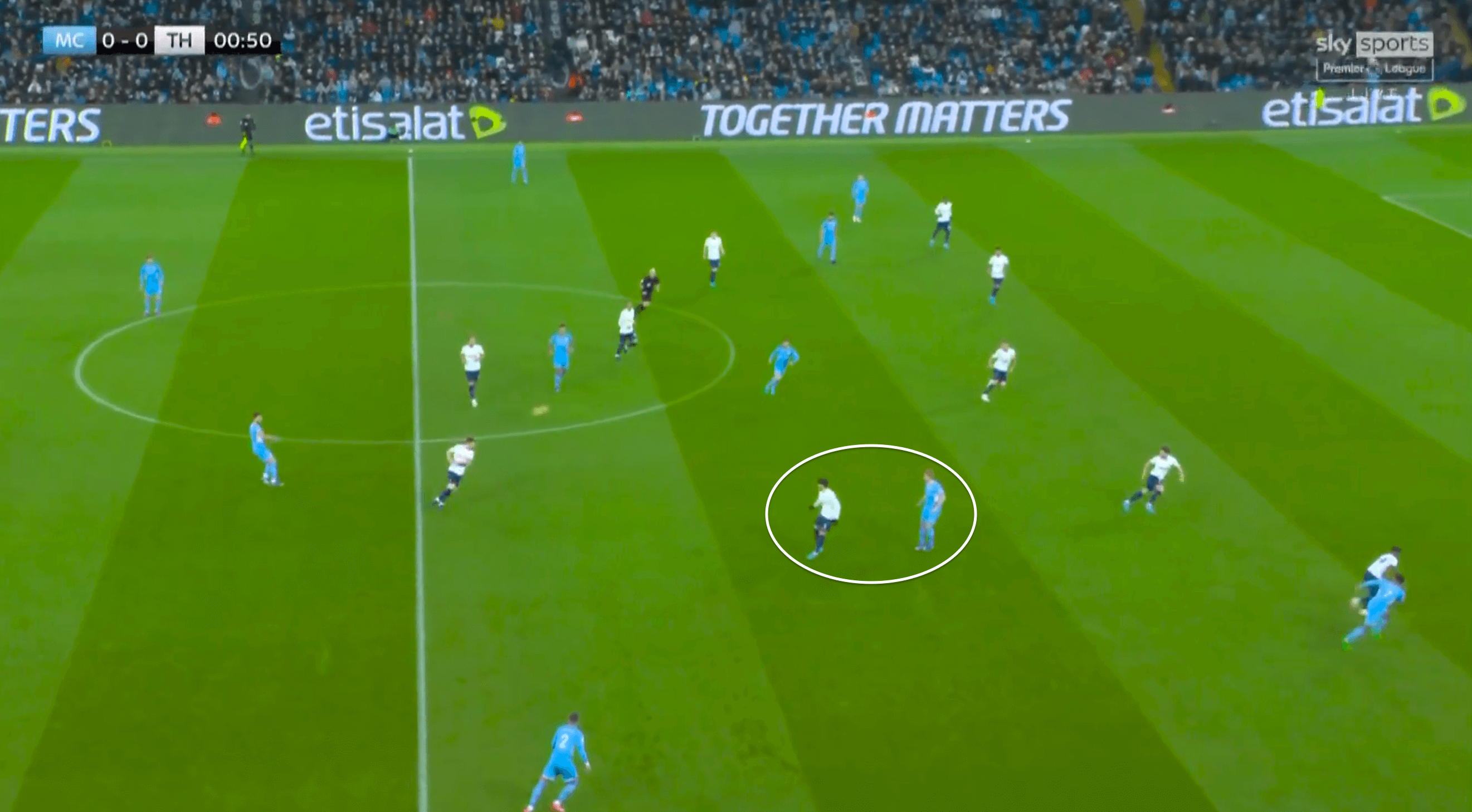 We can see in the image above how Spurs are nullifying City from creating chances from their preferred zone on the pitch. If Son or Kulusevski had pressed the CB instead of Hojberg or Bentancur then that would have left the likes of KDB in the half-space with no one to be marked. Even if Son had decided to press keeping KDB in cover-shadow, City would have still found him by playing it wide to Walker who would now have the passing lane opened to KDB. This would have resulted in a domino of reactive decisions where the CB would have to step out to press KDB, opening up spaces in the defence. Another thing that it solved was that both Bentancur and Hojberg didn’t have too much lateral distancing between them. The image shows how Kulusevski can stay close to the player in the half-space when Bentancur moves forward to press. 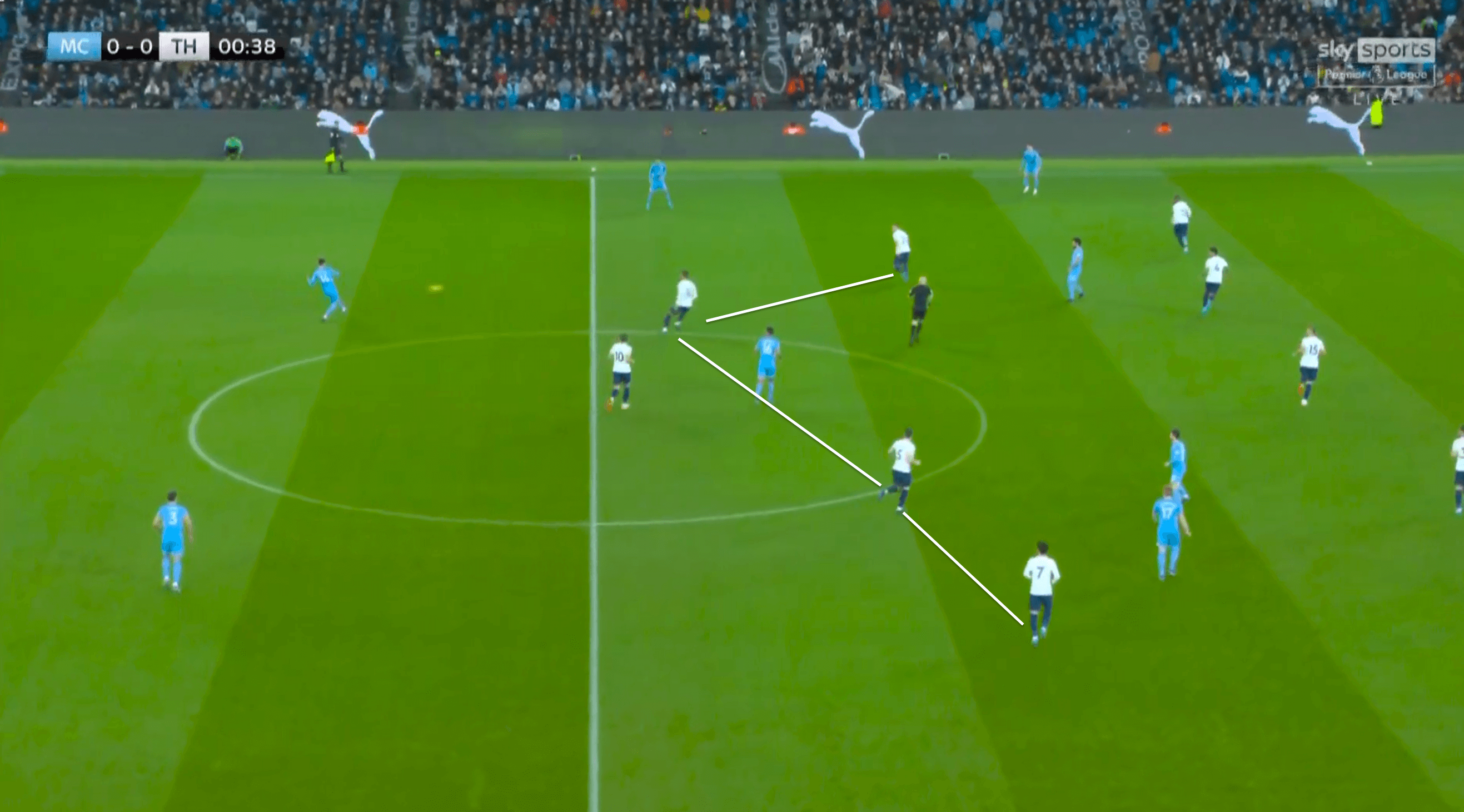 Although this largely nullified City, they still managed to find Gundogan in the half-space where he would slide into the space that Bentancur vacated when he went forward to press the centre-back. City managed to enter the Spurs box a few times using Gundogan where he was found in that space. City though decided to use this very sparingly which meant they couldn’t really threaten Spurs. 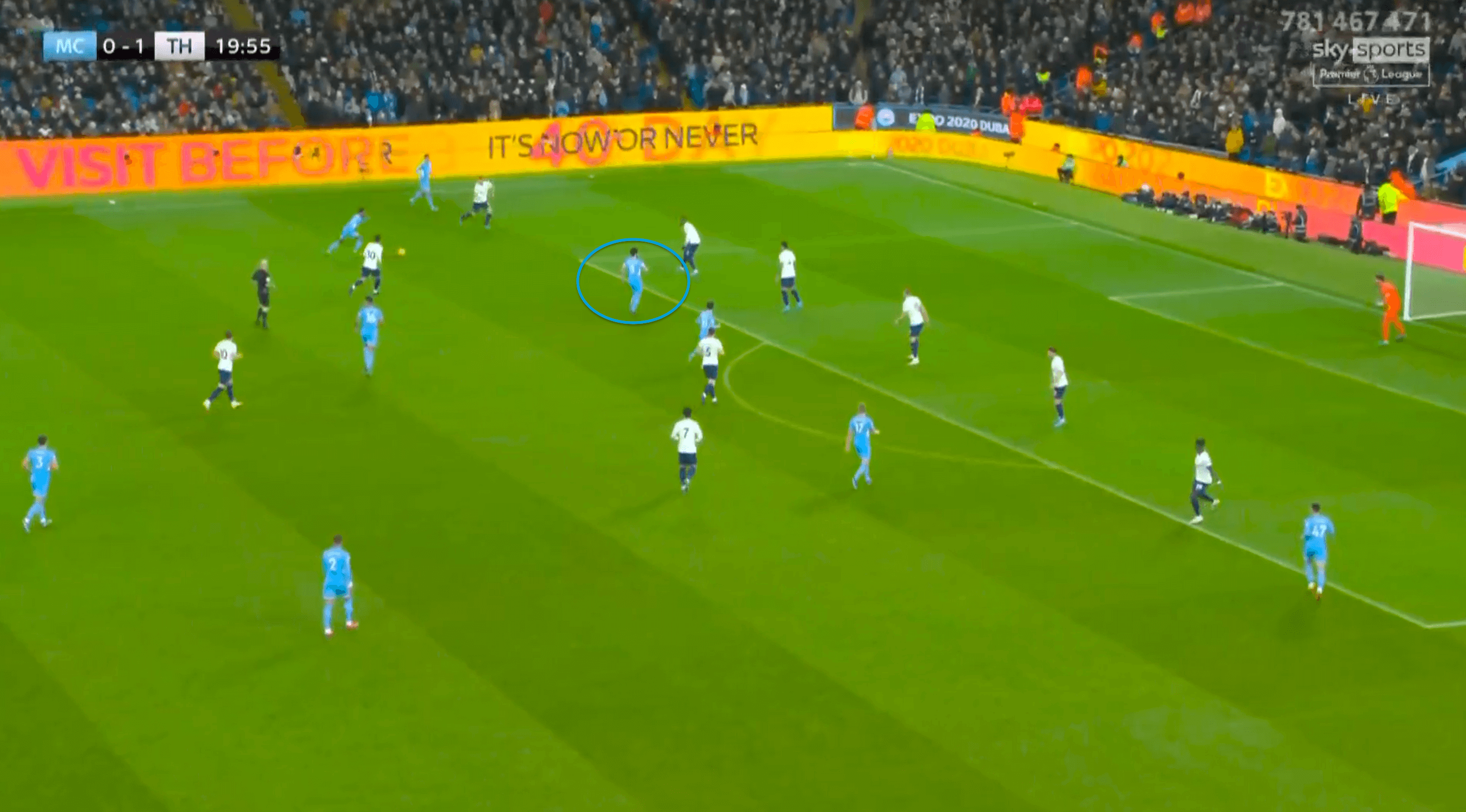 Despite Spurs’ plan being very successful in stopping City from where the defending champions did not really have answers to Spurs’ tactical approach, they themselves made some poor decisions on the ball, especially with the player movements and communication. We can see in the image below where we can see how they have made it easy for Spurs’ defenders to defend with all three attackers making forward runs in behind the line simultaneously and neither of them dropping deep to make advantage of space in front of the defensive line that has been dragged back.

Overall, it was an interesting battle where Spurs finally managed to hold on to their lead after letting it slip twice in the game. Conte’s tactical masterclass meant that they deservingly took home the three points and move three points behind Arsenal and seven points behind Manchester United while also having three games in hand over the latter. City, meanwhile will now finally be put under pressure after a while with the title race against rivals Liverpool being wide open.