Juventus vs Torino, also known as the Derby della Mole, has been a key fixture within the Serie A calendar for over 100 years. For all of Juventus’ domination over their local rivals, and frankly, the whole league, their first meeting back in 1907 saw Torino taking all three points. Needless to say, Torino has not had the best luck against their Torinese, facing them in 206 official matches, having only beaten them 56 times, compared to Juventus’ 92 wins.

Over recent years, this curse over their older brother has continued, with their last win dating back to seven years ago in the 2014/2015 season, with a 2-1 home victory. From that point onwards, Il Toro has only shelled out three draws before their fixture on Friday night. While Torino luck may come during this fixture, Juventus, as of late, has been going through a rough patch over the last two years.

Having not won their tenth Scudetto in a row, losing out to Antonio Conte’s Inter, The Old Lady looked to brush themselves off with the re-appointment of Massimiliano Allegri, hoping to steer the ship back onto the correct course. Because of inconsistencies, a title is out of the question for Juventus, with the top four the major priority. Torino is also on a change of paths, hiring ex Hellas Verona manager Ivan Jurić. Before the Derby della Mole, Torino sat tenth place, with two games in hand over seventh place Roma, looking to capitalise, giving them a chance of European football. This fixture has usually been a formality for Juventus, but for a while, meaningful points are at stake for both sides, which is quite a rarity, which can only make for an exciting game.

In this tactical analysis, I will cover the intricacies that facilitated Torino’s first-half dominance. Also, I will cover Massimiliano Allegri’s tactical performance, as his team failed to perform during the opening passages of the game. Last, I will discuss Torino’s lack of groundbreaking, which cost them all three points.

The home side Juventus started this game using a 4-3-3 formation; Wojciech Szczęsny was in goal. In the back four, former Chelsea defender Juan Cuadrado and Luca Pellegrini are at full-back, with Alex Sandro and Matthijs de Ligt at centre-back. In midfield, Manuel Locatelli, ex-PSG Adrien Rabiot and Denis Zakaria. The front line comprised Paulo Dybala, Álvaro Morata and Dušan Vlahović.

Ivan Jurić’s made use of a 3-4-2-1 formation with Vanja Milinković-Savić. In the back three, Ricardo Rodriguez, Gleison Bremer and Koffi Djidji, with Wilfried Singo and Mërgim Vojvoda at wing-back. Rolando Mandragora and Saša Lukić made up the double-pivot with Josip Brekalo and Tommaso Pobega. Andrea Belotti leads the line. 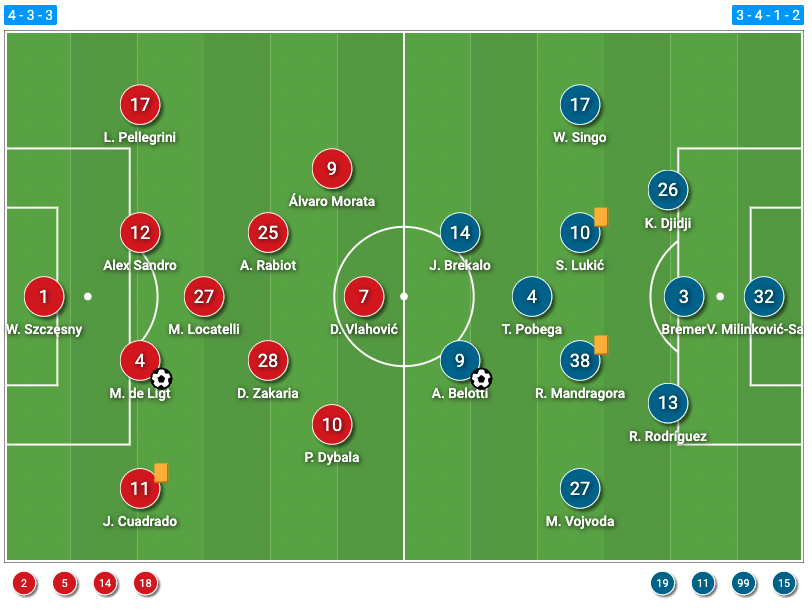 With Juventus being the home side, besides having more quality at their disposal on paper, most would consider them clear favourites, but this was not the case. Torino enters enemy territory with a coherent plan in and out of possession and found a decent degree of success. Regardless of Juventus’ sucker punch, coming as a Matthijs de Ligt back-post set-piece routine, Torino played well during the first half.

On the ball, Torino mixed up their play during the first phase, playing long to the likes of Belotti and Pobega. Torino fancied themselves against their opponents and could work the ball from front to back frequently. A key theme within Torino’s build-up play structure was their manipulation of space and countermovements in wide areas and finding the free man and creating overloads. During the duration of this match, Torino had a few ways to bypass their opposition’s defensive structure. Their use of pinning their rivals to create clear passing lanes was key; here Djidji is in possession and his being pressed by Álvaro Morata, who is blocking the lane to a pass out wide to Torino’s right wing-back. Saša Lukić dropped back into the back-line, attracting the attention of Adrien Rabiot, which created a clear path to the Pobega in the half-space. 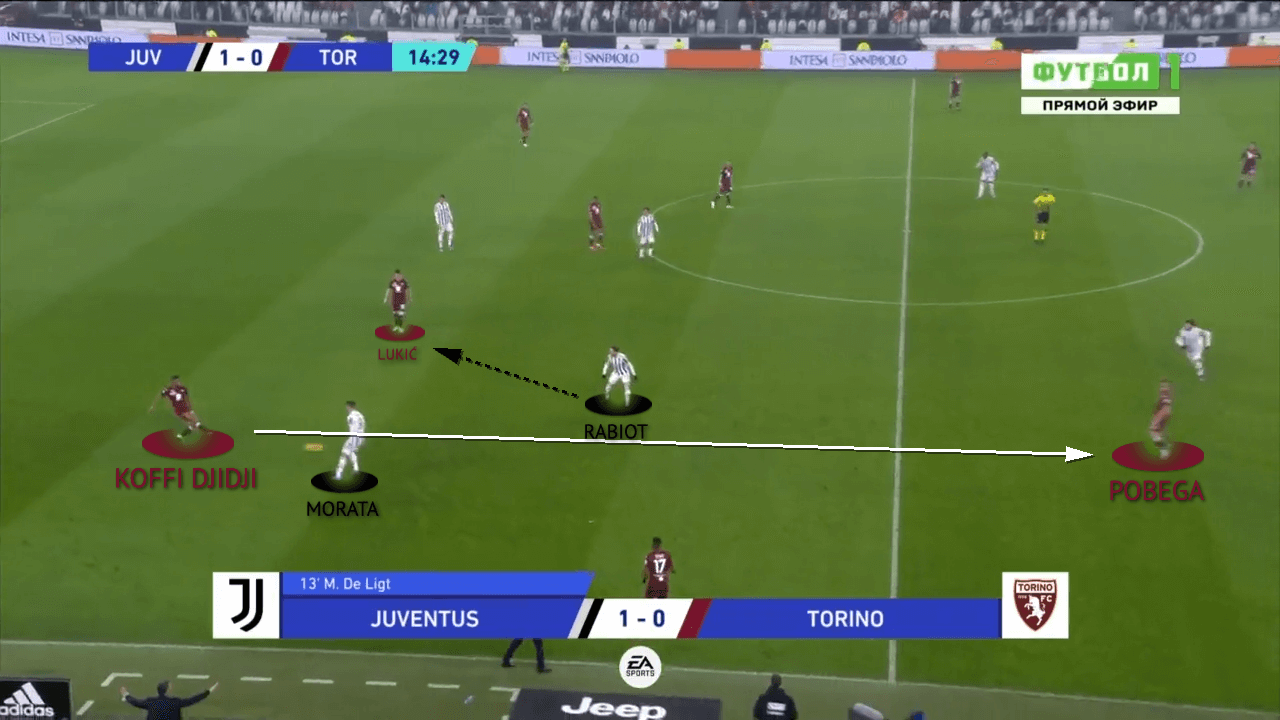 As mentioned prior, their space manipulation and finding the free man was another essential aspect of their game. Here, we have Mandragora and Brekalo in the left half-space with Vojvoda, creating the width. 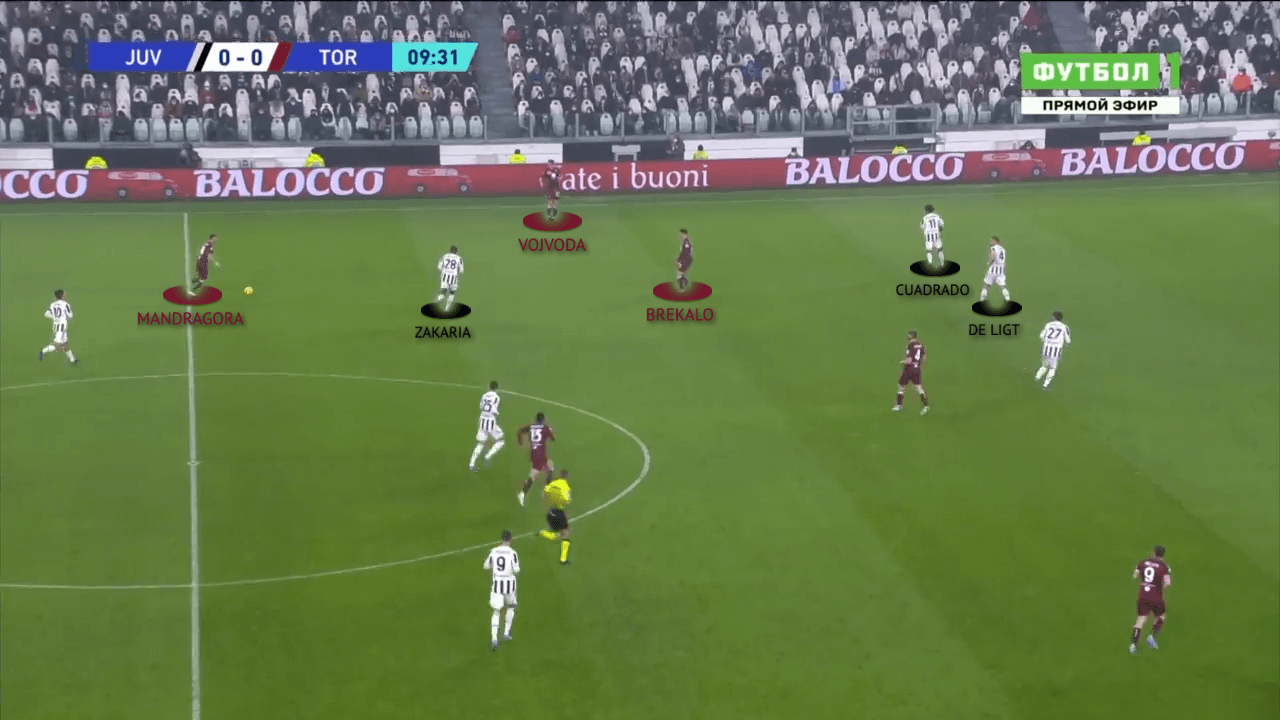 Torino could work the ball wide and find Saša Lukić as the extra man in midfield. This example also showcases Torino’s occupation of Juventus players, which creates open spaces. To deal with Torino’s play out wide, Allegri deployed de Ligt to cover while Cuadrado pressed high. When this would occur, Locatelli would cover the space vacated by de Ligt. With Mandragora taking up a wide position, both Zakaria and Dybala pushed wide to apply pressure, and in doing so, create central space for the likes of Saša Lukić to utilise. 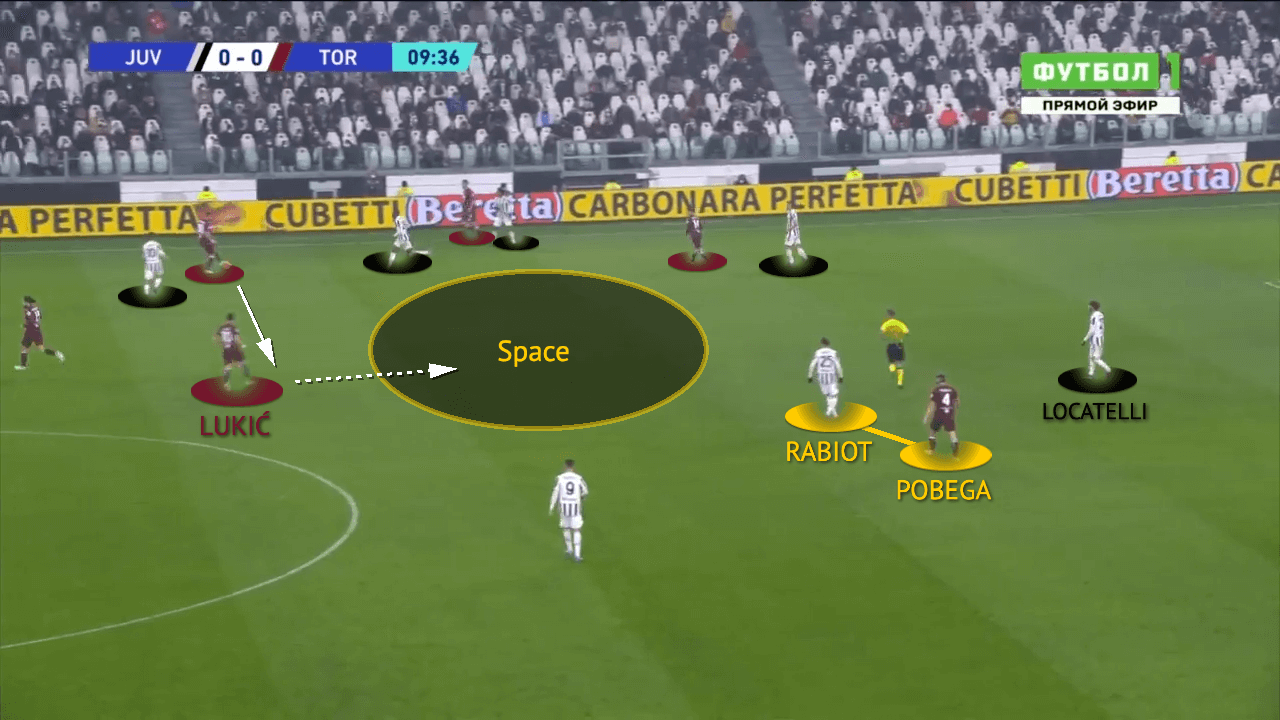 Torino’s organised structure can also be viewed out of possession as they could nullify Juventus during the build-up phase. Ivan Jurić made use of a man-to-man pressing defensive structure, which was brave, aggressive, and effective. During these moments, Torino’s wing-backs were positioned high, condensing the space against the likes of Cuadrado and Pellegrini. In addition, Torino’s 3-4-2-1 transitioned into a 3-4-1-2, with Belotti dropping back slightly to man-mark Locatelli—both Pobega and Brekalo would focus their attention on de Ligt and Alex Sandro. 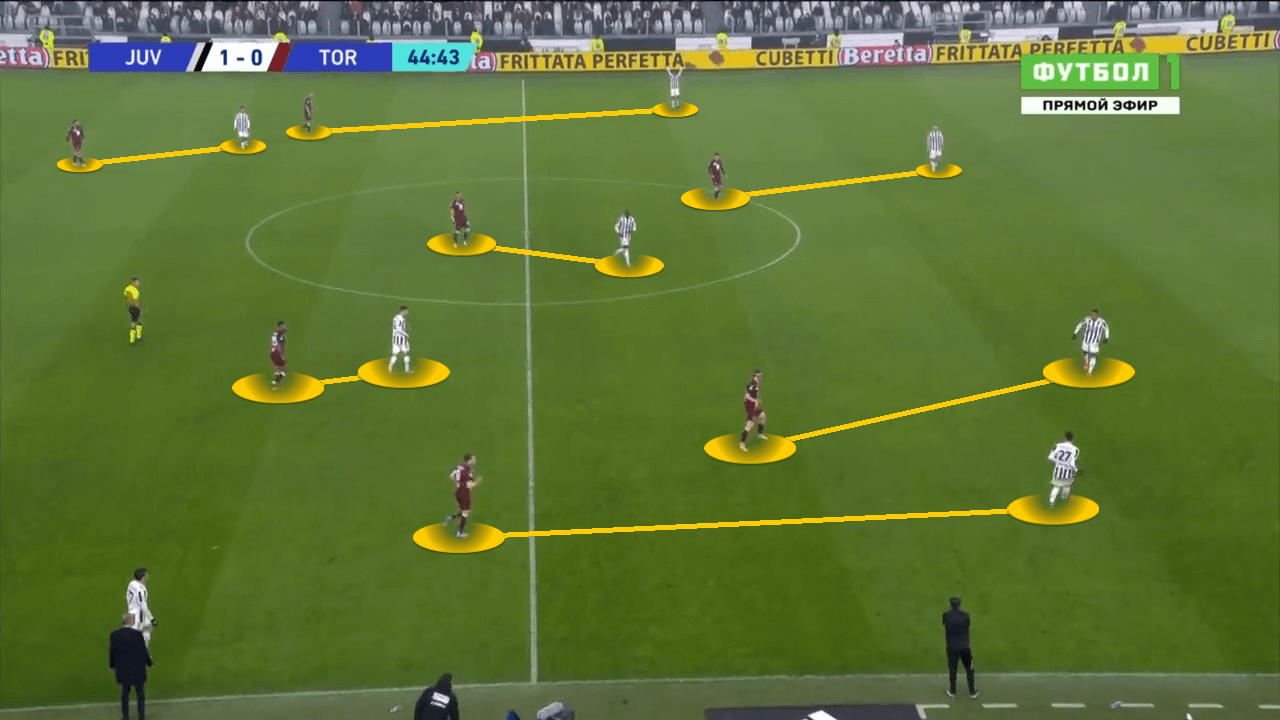 The first half was a sorry sight for Allegri’s team, regardless of them leading the game by one goal to nil; Torino was knocking on the door. The black and white could not handle their opponent’s defensive structure, and were not equipped with the correct automation and structure to progress the ball forwards. During the first half, any joy from Allegri’s team came from the attacking transition, but with their intent to sustain possession, they failed on that note. During a bleak introduction, Paulo Dybala could keep the ball for brief moments and their best moves spawned from, but for most of the game, he was hurried and harried by Ricardo Rodriguez, who kept in at bay. As explained previously, their neighbours had much joy in the wide areas, and to rectify this tactical issue, Allegri reverted to basic, from a 4-3-3- to a 4-4-2, with the substitution of Weston McKennie. This change of tactics had some success, as it occasionally made it hard to find the opposing player in-between the lines, while allowing Juventus to stay compact, but still have enough width to cover Torino’s wing-backs.

However, sometimes their 4-4-2 block was unsuccessful, and the visitors could forge out passing lanes and construct attacks. Here, Milinković-Savić plays the ball to Ricardo Rodriguez. As this is happening, both Zakaria and Weston McKennie both step up to man-mark. Once Rodriguez is in possession, he plays the ball to Torino’s right wing-back. 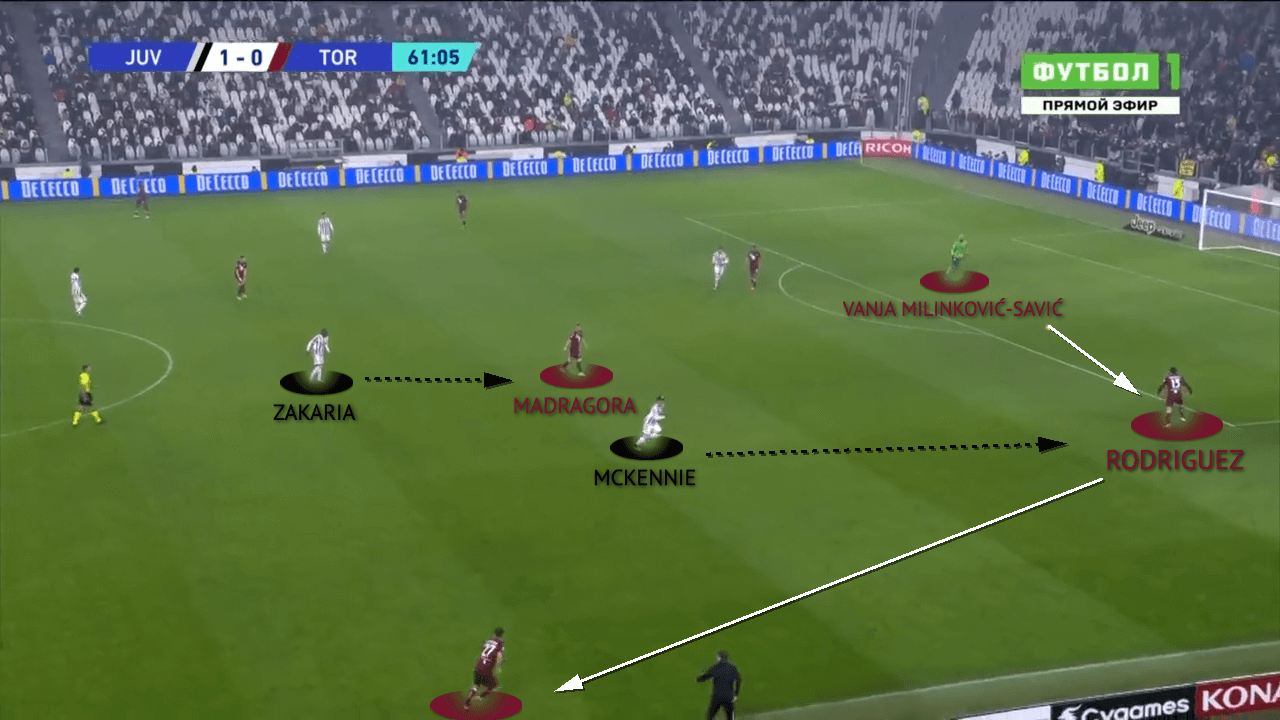 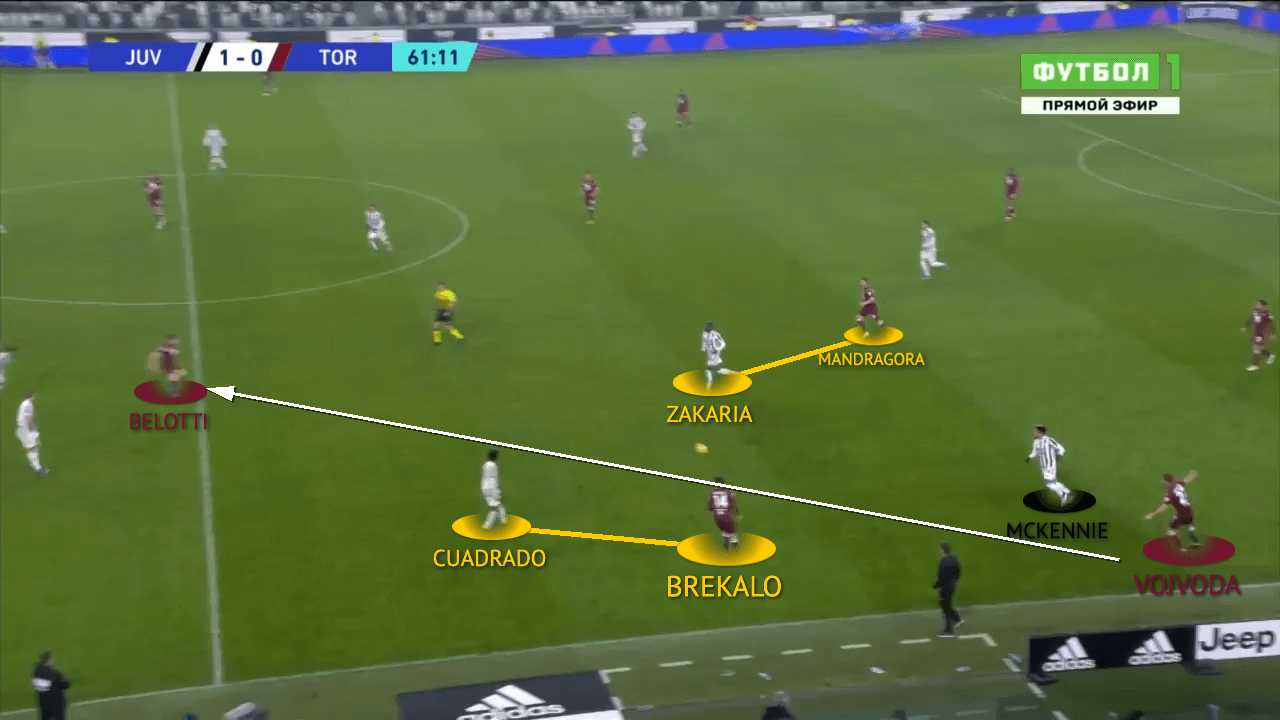 Overall, Juventus started the game on a grim note, as they could not fashion many clear-cut chances because of their lack of attacking arrangement. Their game lacks fluidity or cutting edge, hence their lowest xG performance at home and their third lowest in all competitions, coming in at 0.7.

Ivan Jurić, his players and the fans of Torino can be proud of the performance they saw against their greatest rivals. Most would believe before this match had begun, one point away from home would be an excellent result, but as the game continued, a rare win was possibly on the cards. What cost Torino not to claim three points away at Juventus for the first time in 27 years was their inability to turn organised and methodical passion into clear cut chances, hence their low xG ending at around 0.85. 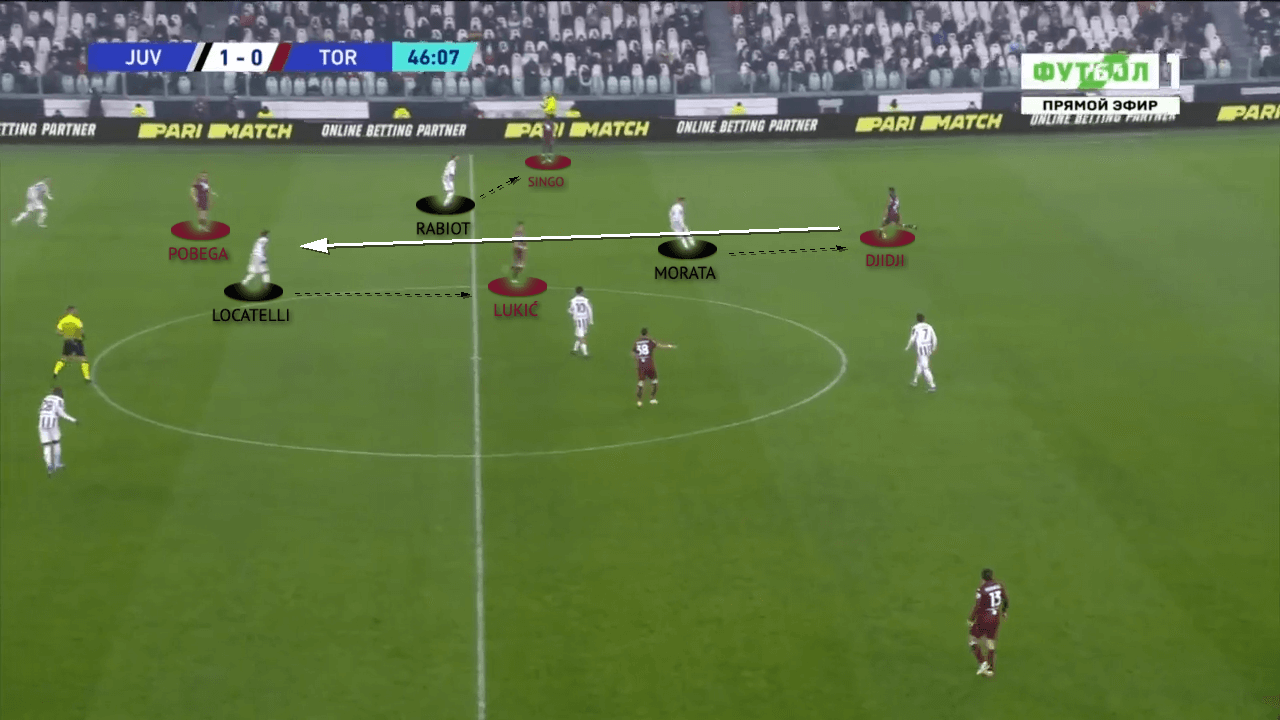 From this point, Pobega plays a first-time pass to Belotti in front of him, who can now progress forward into the wide space. 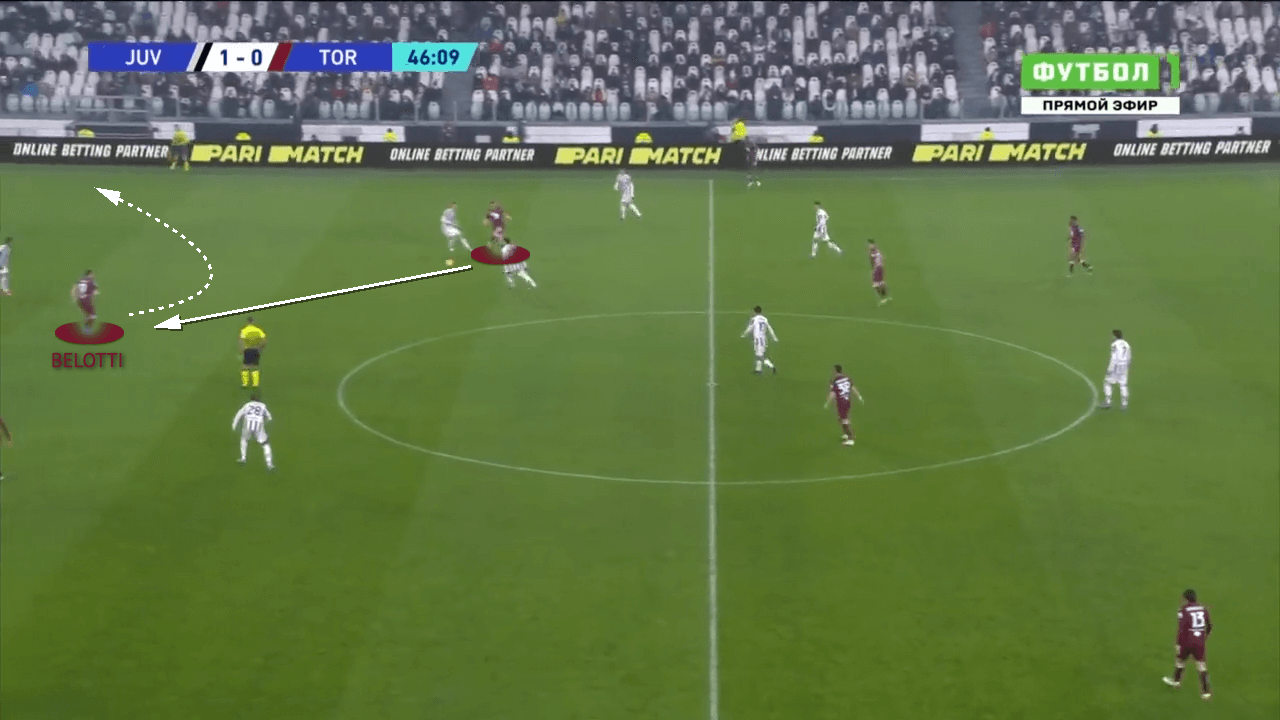 Belotti is in a perfect crossing position and left wing-back Mërgim Vojvoda is in space on the far side, but Belotti could not find it. This sequence is a perfect representation of Torino’s match against Juventus. The football was pretty and the defensive performance was rather strong, but they lacked that little extra to come away with winners during this match.

The rivalry between the two Turin contains so much history but lacks so much variance or surprise. Juventus has gone onto steamroll Torino for quite a few decades, but past performances for Torino have been quite positive over the last couple of seasons. Most would have Juventus being the driving force in this game, taking control and applying the pressure, but quite the opposite occurred as Torino outplayed the home side during the first half. Allegri’s mad changes to regain authority created fresh problems. Torino continued as they began in the second half but failed to put the game to bed after their equaliser. Needless to say, both teams should be happy with a draw, but for completely different reasons.