Liverpool achieved a very important victory against Inter in the first leg of their UEFA Champions League battle for a quarterfinal qualification. Roberto Firmino and Mohamed Salah gave them the two-goal advantage and made their task at Anfield a tad easier.

Despite the defeat, Inter managed to impress and showed how a team could match Liverpool’s tempo and use their strengths against them. The Nerazzurri’s performance off the ball in the first half underlined some issues that Jürgen Klopp’s side might experience when they don’t control the game.

The match was full of intense pressing from both sides, aggressive yet efficient defensive displays and a lot of forced errors, all of which set a high tempo since the beginning.

On the other side, it was full of inefficiency in front of the goal. Only two out of 20 shots that they produced collectively were on target and they were eventually converted into goals. Despite the two goals being scored in the last 15 minutes of the game, the first 75 minutes were very indicative of where both teams are at the moment.

In this tactical analysis, we examine their performance and explain the tactics of the Serie A and the Premier League title contenders.

Simone Inzaghi set his team up in their usual 3-5-2 with Samir Handanović covering the goal and Alessandro Bastoni, Stefan de Vrij and Milan Škriniar being immediate support. Marcelo Brozović covered the defensive midfield, while Ivan Perišić and Denzel Dumfries were in the wing-back positions.

The central areas were secured by Hakan Çalhanoğlu and Arturo Vidal, while the manager relies on Edin Džeko and Lautaro Martínez in front of the goal.

Inter’s centre-backs pulled out one of their best performances, being a constant shadow of Liverpool’s most threatening players and stepping up where needed. Another reason for resisting the pressure for so long was the support coming from Çalhanoğlu and Vidal, who were constantly involved defensively and have a couple of crucial contributions in their own half.

Surprisingly, it was the attacking duo that disappointed and couldn’t take advantage of the team’s chances and each of them only managed to shoot once. Inzaghi’s first change in the game was replacing Martínez for Alexis Sánchez in the 70th minute, which might have been a little late reaction that might have cost him the game.

Dumfries also didn’t manage to contribute as per usual and lost the battle against Andrew Robertson who not only provided defensive stability but also contributed to Liverpool’s opener.

Klopp relied on Alisson on the goal, with a four-man defensive line of Robertson, Virgil van Dijk, Ibrahima Konaté and Trent Alexander-Arnold. In midfield, he opted for Thiago Alcântara, Fabinho and the 18-year-old Harvey Elliott. Upfront, he went all out with Diogo Jota, surrounded by Sadio Mané and Salah.

Since Jota wasn’t efficient enough upfront and the opposition managed to limit his movement, Klopp decided to change him for Firmino at the beginning of the second half, looking for better positioning and explosiveness in attack. This was followed by three more changes, as the German manager realised that he needs more experience in midfield to minimise the defensive errors and provide more stability on the ball too. Naby Keïta and Jordan Henderson replaced Elliott and Fabinho respectively, while he also subbed Mané who was tightly followed by Škriniar and couldn’t play on his potential.

There aren’t many teams that have managed to show such resistance against Liverpool’s ruthless performance both in and out of possession. Inzaghi’s side, though, were on the front foot since minute one and instead of allowing Liverpool to manipulate them and control the game through their press, as they usually do, they didn’t step away and applied the same strategy to the opposition.

Inter’s only way to avoid being pinned back and giving away the initiative was by increased awareness off the ball, solid marking strategy and intense press. The team stayed true to their style of play despite the calibre of their opponents and tried to match their tempo. There were a few things that allowed the Nerazzurri to resist for 75 minutes: they pressed high to trouble Liverpool’s build-up from the back; they tried to put the opposition under constant pressure and force them into mistakes; they would often invite the press to their own third in efforts to open the passing lanes and progress the ball. 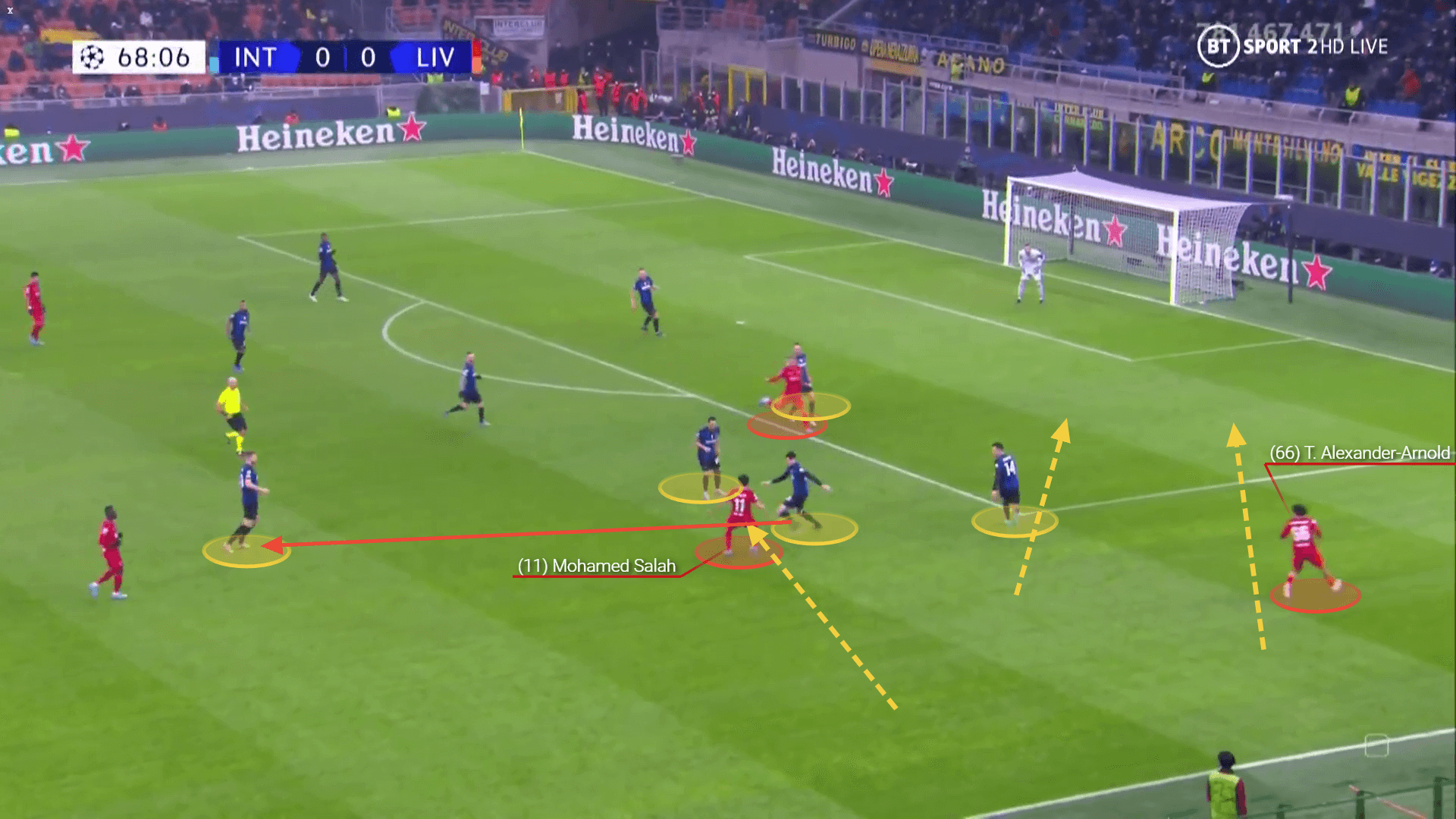 His run off the ball didn’t distract them and he didn’t manage to open space for Salah. That’s an example of Inter’s strong defensive organisation and awareness.All three were successful for the most part and made Liverpool’s life harder as it is unusual for them to have their strengths used against them.

Liverpool met unusual resistance and they had to put more effort to build-up from the back. This wasn’t unusual for Inter, though, as they usually press high and like to recover the ball in the opposition half. The Italian side pressured the opposition enough to force them into a few inaccurate actions. Klopp’s players gave a sign of poor work under pressure. Alisson lost possession on a few occasions, being insecure in playing with his feet and retaining possession and opted for long balls to escape the press, which would end up in the opposition.

Inzaghi wanted all of his players involved defensively, and, as mentioned, Çalhanoğlu was one of the most active players off the ball. He would constantly drop back to support the team and his commitment and strong positioning resulted in him often recovering the ball (13 recoveries) and giving Inter the chance to attack.

Inter’s man-to-man marking strategy also helped them in keeping the opposition away from the goal. Expectedly, there were a few occasions where Liverpool managed to break through and expose the defence, but the commitment the Nerazzurri’s players showed in following their targets was impressive.

The rather early replacement of Jota and Mané was Klopp’s reaction to Inter’s tight defending as they managed to limit their movement both on and off the ball, affecting Liverpool’s attacking efficiency immensely. Not only they were successfully pressurising them, but they also balanced their direct interventions well by being aggressive enough yet measured in challenges. Inter didn’t see any yellow cards, and it wasn’t because of staying away from the ball and giving away the initiative but because of their well-measured actions.

Inviting the press – smart or not?

Inzaghi’s side could be seen pressed in their own third rather frequently. But was it them inviting the press or did just Liverpool manage to pin them back? The answer is a little of both.

Inter would invite the press on many occasions and try to retain possession at the back, in their efforts to open the passing lanes and progress the ball. With Liverpool being pressing masters and trying to recover the ball in the advanced areas, forcing the opposition into inaccurate passing, this would often work, as the Reds would overcommit to their press. This allowed Inter to build up fluently on multiple occasions, displaying their link-up-play abilities. 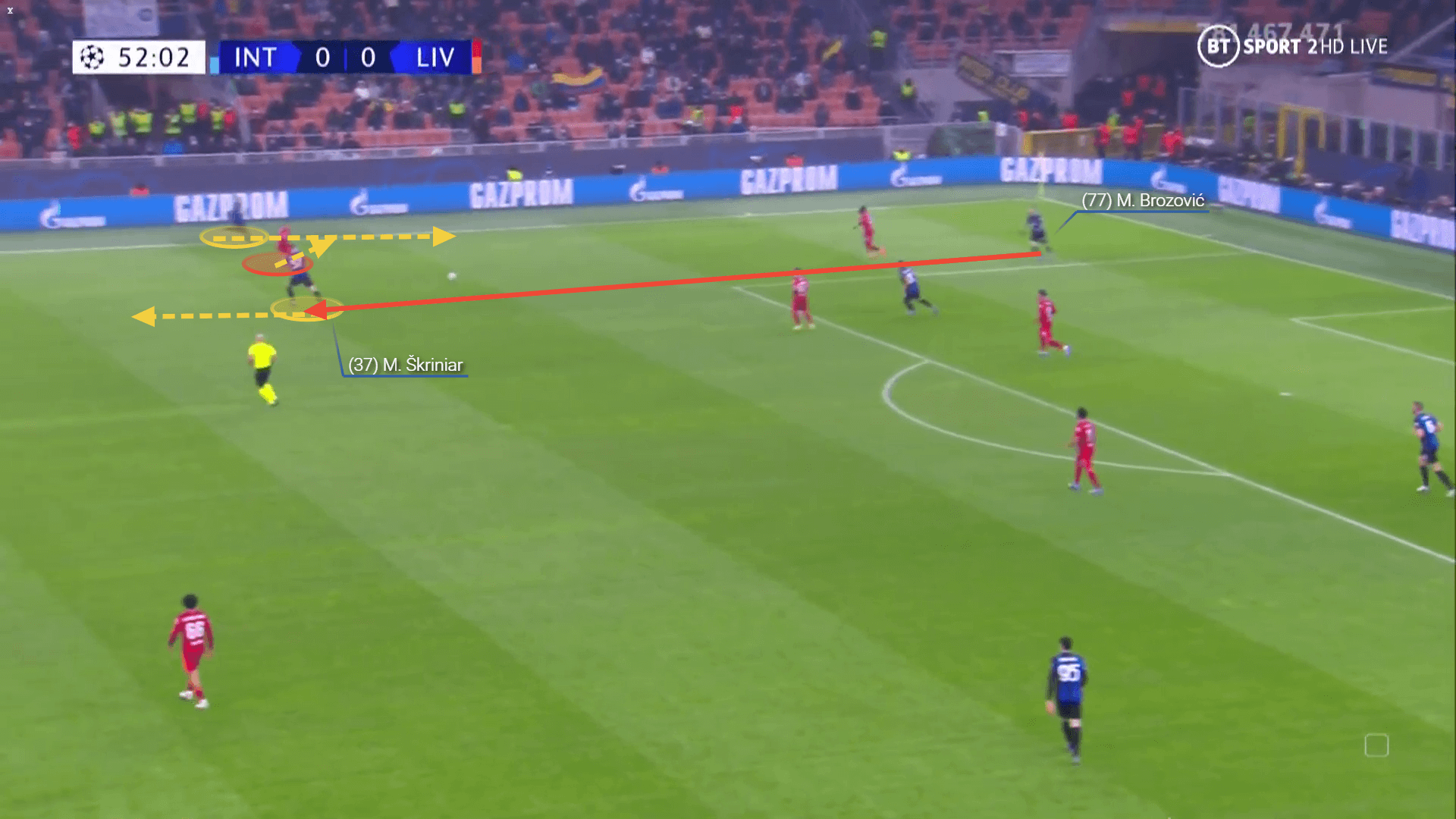 This resulted in opening spaces behind and successfully progressing the ball.In some moments, though, the Italians would fall into their own trap, as the wrong timing of their passes would give Liverpool the opportunity to pin them back, despite intentionally inviting the press.

The importance of Klopp’s changes

Klopp’s reaction to Inter’s resistance was making a few changes in the second half which proved to be important for them to get the three points. As mentioned, Jota’s and Mané’s inefficiency in attack, forced him to switch them for Firmino and the new signing Luis Díaz respectively. This was done for a few reasons.

After a very intense first 30 minutes of the game, by the end of the first half both teams decreased the tempo and as their PPDA rates confirm, decreased their press. Inter, though, started the second half with a very high intensity again, which meant that Liverpool need to find a way to match that. Introducing Firmino was one step towards getting back to doing what Liverpool do best but it seemed like it wasn’t enough to break Inter’s solid defence. The Reds needed a fresh presence on the left too, not only to support their high pressing efforts but also to be able to hold on to the ball in possession and bypass the defenders.

Díaz seemed like a suitable option for that matter and introducing him along with fresh players in midfield caused distress to Inter’s defence. The team immediately increased their press and took advantage of Inter losing momentum and the players being tired. This is when they got more of the possession in the opposition half, which resulted in finally scoring a goal.

Movement in the opposition half

Inter’s overcommitment to the man-to-man marking resulted in failing to re-organise once the new players came in and made it difficult to counteract Firmino’s smart use of space and his aerial presence.

The Brazilian’s strengths differ from Jota’s in some aspects and his contribution brought something new to Liverpool’s attack. His passing was very efficient and gave the team more confidence in possession, helping them to bypass the press through short passing and retain possession for longer periods.

Combined with Henderson’s presence and passing in the centre, the team managed to take over the control of the game and create more efficient combinations. Díaz would also frequently cut inside, which forced his opponents out of position on a few occasions.

As our analysis showed, Inter’s resistance underlined the fact that Liverpool do have weaknesses too. The Reds, though, managed to get out of the difficult situation thanks to Klopp’s well-timed changes. His players took advantage of their opportunities in the second half and made the Nerazzurri’s task for the second leg very difficult. On the other side, Inter were only lacking the magic in the final third and if they make better use of their chances in the next game, they might have a chance to proceed. Their first meeting was a pressing masterclass that kept everyone on their toes until the very end.