Arsenal and Liverpool met for a fourth time this season in a very important game for both sides. The Londoners were in desperate need of points so they could move away from Manchester United, West Ham and Tottenham who are all in the fight for a Champions League spot. This was a must-win fixture for the Jürgen Klopp’s side, who had to close the gap to Manchester City and stay in the title battle.

The night ended with a third defeat for Mikel Arteta’s team, and while there are many positives that could be taken from this game, they still lacked the maturity to deal with the changing circumstances. Liverpool, on the other hand, managed to get out of a difficult situation as the manager used his available players in the best possible way. In an unusual manner, the team were caught unprepared and struggled to bypass Arsenal’s press and create quality opportunities.

This is not an isolated case for the Merseyside, though. The team have shown vulnerability against opponents that match their press intensity, with the most recent example being the CL first leg against Inter. Klopp’s ability to change the direction of the games with his substitutions makes the difference in these situations.

In this tactical analysis, we examine both teams’ tactics and explain how Arsenal’s strategy has improved and how Liverpool tilted the scales to get another win over the Gunners.

Arteta opted for his optimal squad for the game and set the team up in a 4-2-3-1 formation. Aaron Ramsdale covered the goal, while Kieran Tierney, Gabriel Magalhães, Ben White and Cédric Soares formed the back four. The double-pivot of Granit Xhaka and Thomas Partey provided midfield support, with Martin Ødegaard strolling in front of them. The manager didn’t move away from his latest set-up and relied on Gabriel Martinelli and Bukayo Saka on the flanks, while Alexandre Lacazette was covering the central areas.

Despite the pressure, the team managed to keep their structure throughout the game and demonstrated their improved positional sense and actions on the ball. The centre-back pair was crucial once again and their contribution kept Liverpool away from scoring more goals. The Xhaka-Partey partnership starts to impress, and the midfielders were crucial both in and out of possession.

Some of their best performers this season Ødegaard and Saka couldn’t make an impact in attack, though, which led to changing them for Emile Smith Rowe and Nicolas Pépé. His changes might be blamed as “too late” as they came after conceding twice in ten minutes.

Arsenal’s desperate need for a striker was underlined once again as, despite his overall contribution, Lacazette failed to make an impact in front of the goal and threaten it.

Martinelli was the main spark of attacking hope for the Londoners as he constantly bothered Trent Alexander-Arnold on the left and the Englishman needed the support of his teammates on a few occasions to be able to counteract Martinelli’s agility.

Klopp relied on his favoured 4-3-3 with Mohamed Salah starting on the bench. Their top goalscorer was declared “doubtful” to participate in the game due to an injury, although it seemed like the stars were perfectly aligned and his introduction in the second half did exactly what it was planned to – disorganise Arsenal’s well-structured defence.

When it comes to the starting XI, Alisson was on the goal with Andrew Robertson, Virgil van Dijk, Joël Matip and Alexander-Arnold in defence. In midfield, the manager relied on Thiago Alcântara, Fabinho and Jordan Henderson. The new addition Luis Díaz got another chance in attack, being positioned on the left flank, next to Diogo Jota and Sadio Mané. Díaz and Jota struggled with their creativity and failed to threaten the goal throughout the first half, although the Portuguese took advantage of his only opportunity right before being subbed for Roberto Firmino. The Colombian was replaced by Salah.

Klopp’s changes proved crucial again. Despite the unproductive first half he avoided replacing players early on. His strategy made Arsenal comfortable and he purposedly made the team give away the initiative in the first minutes of the second half. The Gunners were the dominant team before the break and Liverpool used that to lure them into a trap, inviting pressure and relying on quick counter-actions.

Giving Liverpool a taste of their own medicine

There is something Liverpool are not used to – meeting a huge resistance from their opponents in the face of a well-structured defence, high press intensity and quick reactions in transitions. That’s how Arsenal managed to trouble their opponents and to limit their efficiency with the ball.

After a quick burst of energy from Liverpool at the beginning of the game, the Londoners settled and slowly took away the initiative by matching the opposition’s press intensity and putting efforts into a smooth build-up-play in aim to employ their possession-based approach and bypass the press.

Arteta’s players relied on their marking strategy and intelligent positioning to pressurize the opposition and block the passing lanes, troubling their build up from the back and forcing them into sending the ball back. Arsenal’s behaviour affected Liverpool’s efficiency on the ball and resulted in an unusual inaccuracy in their back passes and difficulties in ball progression.

The Gunners were determined to stop their opponent’s attacks early on and involved in a high press with all of the attacking players having an impact and pressing in the final third. This resulted in recovering the ball in the advanced areas 18 times, something that Liverpool rarely experience in their defensive third and forces disorganization in their defence. 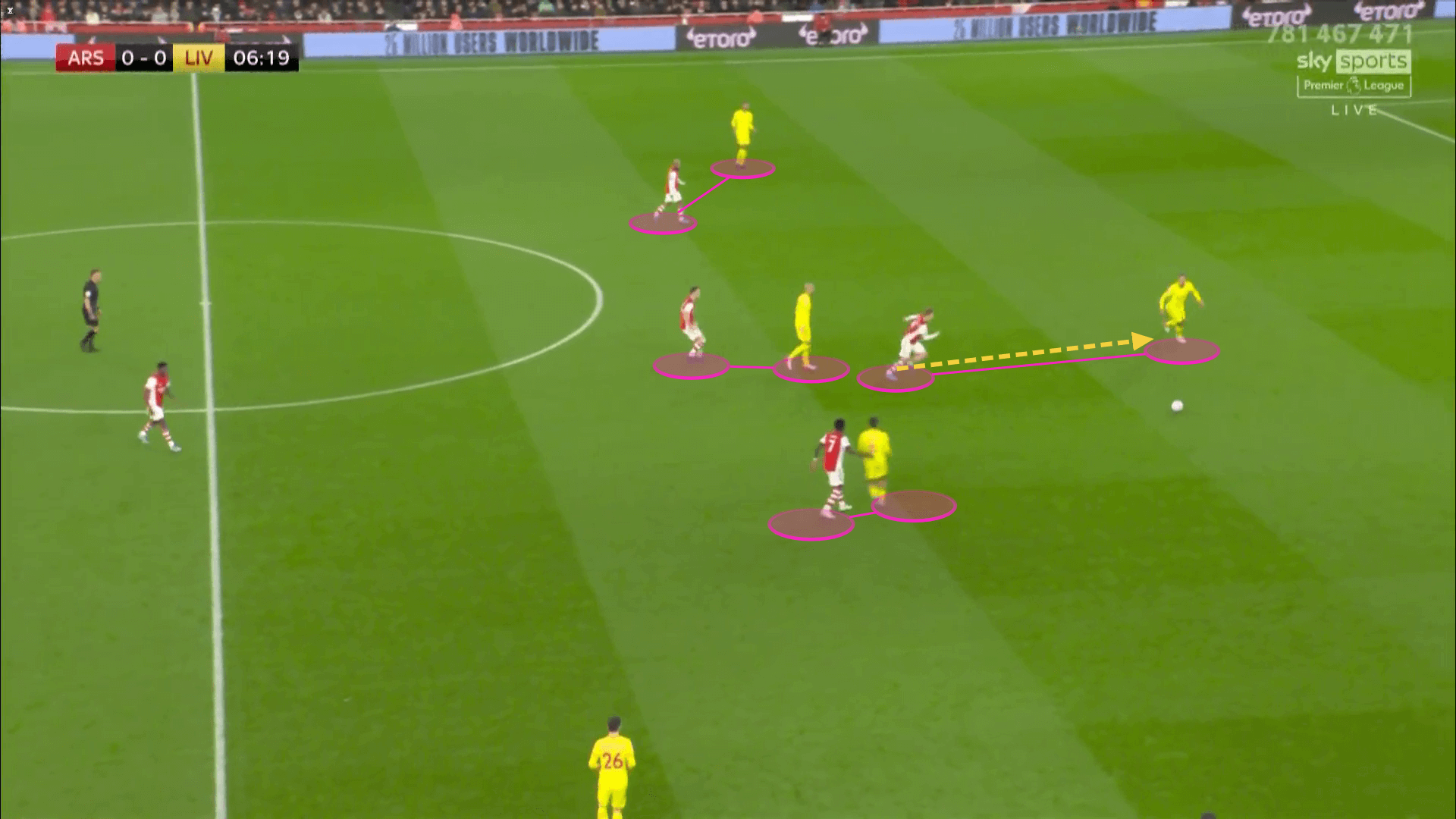 Arsenal used the opportunity to press high and force the opposition to send the ball back.The biggest pressing battle was in midfield, where Xhaka and Partey were toe-to-toe with Fabinho and Thiago. The Arsenal players were very efficient in their pressing efforts and demonstrated their improved positional sense and ability to recover the ball (11 and 13 times respectively).

Arteta’s side displayed an improved counter-pressing strategy too, especially in the first half. Their reactions in transitions have improved and they managed to block Liverpool’s opportunities to expose them on a counter on multiple occasions. Their positional sense and organisation have affected their ability to counter-press. They were able to resist Liverpool’s attacking actions as a result of their improved work under pressure.

Klopp’s reactions against teams that try to match their press intensity follow a similar pattern 1. invite the press; 2. make substitutions; 4. take back control; 5. Drop back; 6. Counterattack.

Once Liverpool experienced difficulties to break through the oppositions’ pressing structures, Klopp immediately changes their strategy and tries to lure them into a trap. He applied the same strategy against Arsenal.

The Londoners’ efforts off the ball resulted in Liverpool struggling to bypass their press and often got them stuck in midfield, where they lost quite a few balls. The Merseyside were lacking Salah’s presence in and around the box where they could find him with a long ball. Díaz couldn’t make the needed impact in the final third as he was constantly dropping to support the actions on the flanks which kept him away from threatening the goal. The resistance they met on the flanks also made it difficult for them to employ their usual strategy. Both teams focused on using long balls to bypass the press which was the main source of attacking opportunities.

Arsenal started to control the game and have more of the possession which at some point became a wanted effect by Klopp. It was obvious that Liverpool are the team that can bring in quality replacements in the second half and start it fresh. The team gave away the initiative and often invited the press and tried to exhaust their opponents as quickly as possible.

The Reds kept the strategy right after the break, only for Klopp to be able to replace Díaz with Salah and Jota with Firminho to increase the explosiveness in and around the box and take back control. The team immediately increased the press again and pinned Arsenal back, forcing them to rely on players’ individual efforts instead of defending as a unit. Liverpool’s increased time on the ball in the opposition half increased the pressure and forced the opposing players into mistakes. 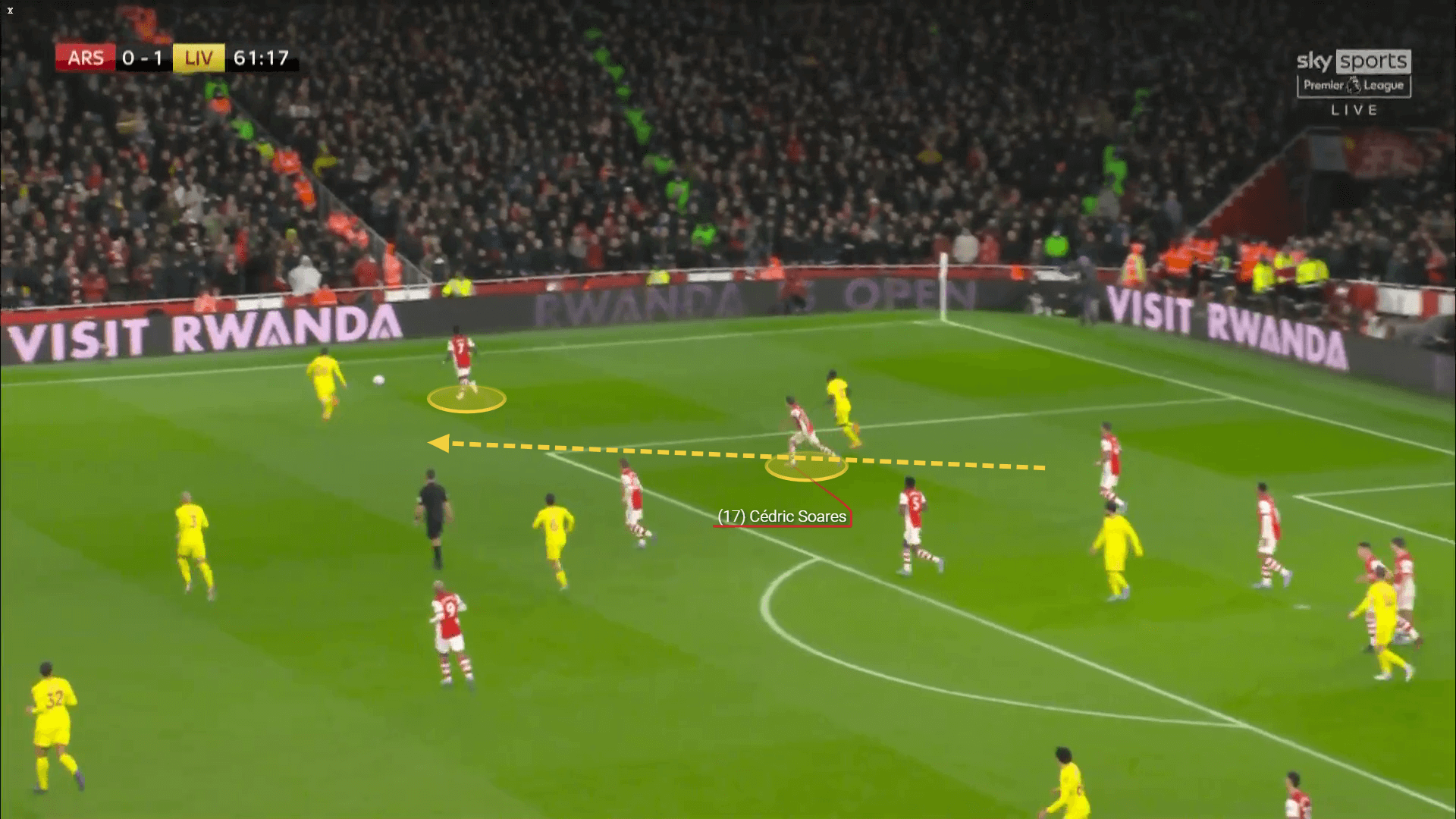 Soares making an individual mistake and getting out of position to cover Robertson. Liverpool bypassed the press but no one covered depth for Soares which exposed Arsenal.Once they managed to score two goals in ten minutes, they comfortably gave away the initiative again. This wasn’t only done to defend their advantage, though, as they didn’t stop trying to create opportunities. Once they gave away the initiative and decreased the press intensity, they tried to expose the opposition on a counter.

Against Liverpool, Arsenal showcased their improved strategy and most of all the better execution of it. The players’ discipline and consciousness both in and out of possession has resulted in better positioning in their build-up-play, better defensive reactions and a better connection between the lines.

The ease with which the team managed to bypass Liverpool’s press and progress the ball on multiple occasions is a sign of the increased tactical intelligence of the players. Their one-touch pass combinations and constant movement off the ball allowed them to control the ball and employ their possession-based approach. 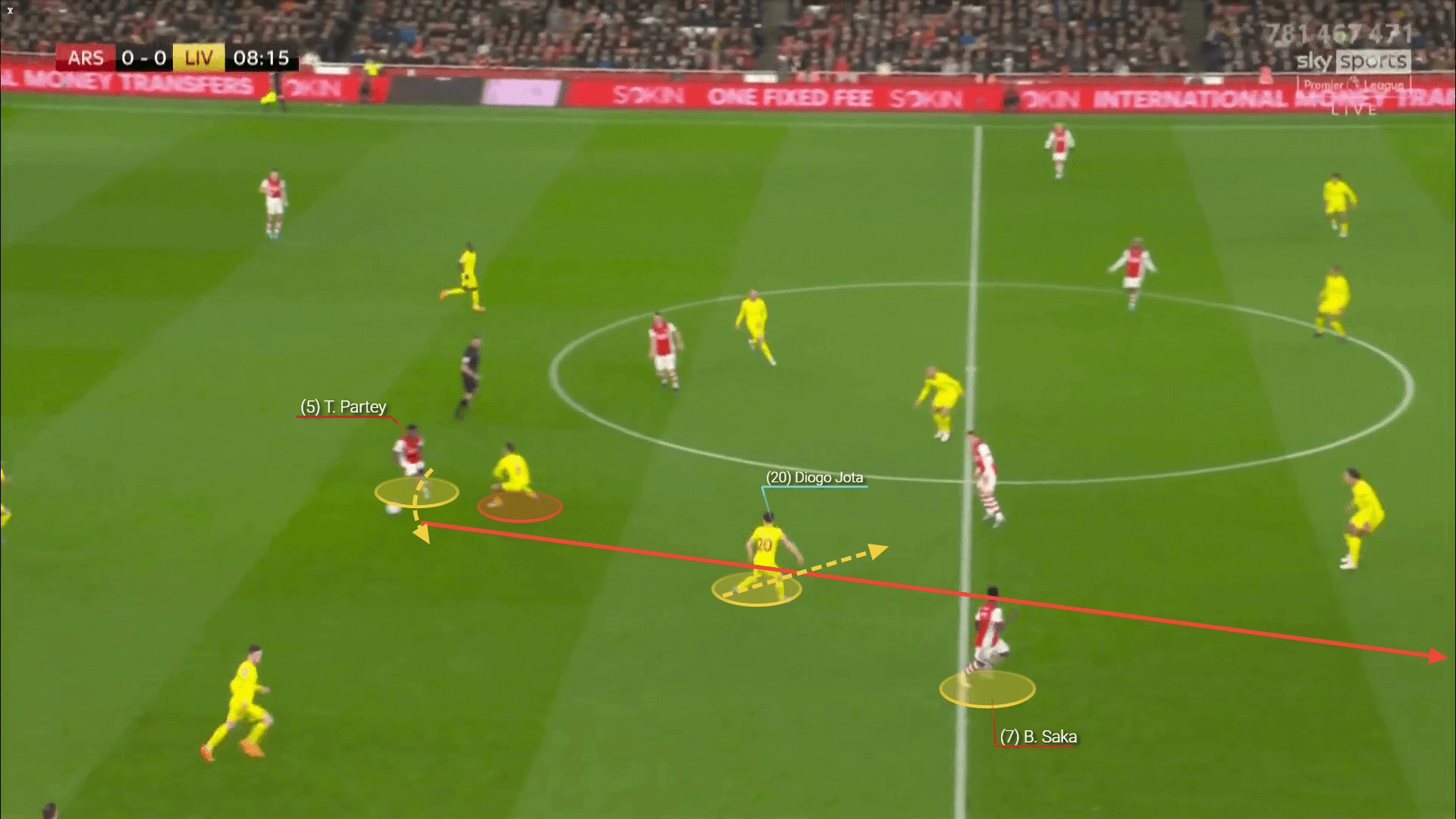 Partey’s composure then helped him to escape the pressure and send a smart long ball to Saka on the flank and dismiss Liverpool’s second line of defence. This is a showcase of Arsenal’s improved actions in possession as they managed to escape the overloaded midfield area with a couple of quick passes. It also shows Partey’s importance in ball progression.One of the most criticised Arsenal players, Xhaka, was brought to new life under Arteta and has now become one of the pivots of this team. His increased defensive awareness, combined with his willingness to push the ball forward have affected the team’s performance in possession. Partey’s presence in midfield has underlined how desperately the team needed a strong central pair to improve the connection between the lines. The former Atletico Madrid player is vital for breaking their opponents’ ball progression efforts, while his passing abilities have proven crucial for the team’s final third distribution.

It now seems like the only missing part in Arteta’s puzzle is a striker with a clinical finish to lead players like Saka, Martinelli and Smith Rowe, who have the quality to provide for the team. The manager relies on pace, individual skill and strong movement in attack, as shown by Martinelli’s movement against Liverpool. Lacazette’s experience is not enough, though. While Arteta’s started using him to his strengths and the Frenchman’s hold up play and play with his back to the goal have been outstanding, he is lacking the finishing needed to convert chances into goals.

As our analysis shows, Klopp’s side defeated Arsenal with experience and better adaptiveness. The Reds managed to use Arsenal’s strengths against them and outwit them in a game full of intensity and pressure. While Arteta has a lot of positives to take out of this game, there are signs of remaining immaturity in certain situations that throw the team’s efforts to waste. While as Klopp said in the pre-match press conference Arsenal have “..have a clear structure, clear idea, are properly tuned, possession-based, young, full of talent and joy”, getting rid of these mistakes will be crucial for Arsenal to achieve their future goals.