Tottenham Hotspur hosted Newcastle United on the back of the international break in what was a must-win game for Antonio Conte’s side to stand any chance of finishing in the top four. After Manchester United drew with Leicester City and with Arsenal yet to play, the onus was on Spurs to put in a decent performance. Conte’s team was looking to make it three Premier League wins on the bounce for only the second time in his tenure.

Newcastle arrived into this fixture having lost the last three Premier League games and Eddie Howe stated that he was looking for a reaction from his players. Despite the recent poor run of form, Newcastle have been decent since the turn of the year. On Christmas day, they found themselves sitting in the relegation zone with one win and 10 points from 18 matches played. The Toon are now 15th in the league with a nine-point cushion over the relegation zone, having won 6 of their 10 league games in 2022.

After a cagey first half ended level at 1-1, an emphatic display from Tottenham in the second period saw them emerge as comfortable 5-1 winners to leapfrog Arsenal into 4th place on goal difference.

This tactical analysis will break down some of the key tactics we saw in Sunday’s match.

Spurs lost defender Sergio Reguilón to a knee injury during the week. He was replaced by Emerson Royal with Matt Doherty shifting to the other flank in an unnatural position as left wing-back.

Tottenham lined up in Conte’s customary 3-4-3 formation. Captain Hugo Lloris started in goal behind a back three of Cristian Romero, Eric Dier and Ben Davies. Emerson Royal and Matt Doherty occupied the wing-back positions with Pierre-Emile Højbjerg and Rodrigo Bentancur as the holding midfielders. The in-form trio of Heung-Min Son, Dejan Kulusevski and Harry Kane started as the front three.

Newcastle set up in a 4-1-4-1/4-3-3 formation. Martin Dubravka played in goal with the back four consisting of Javier Manquillo, Fabian Schär, Dan Burn and Matt Targett. The midfield three was made up of Jonjo Shelvey, Joe Willock and Joelinton. Allan Saint-Maximin was fit to start as he and Ryan Fraser played on the flanks with Chris Wood leading the line. 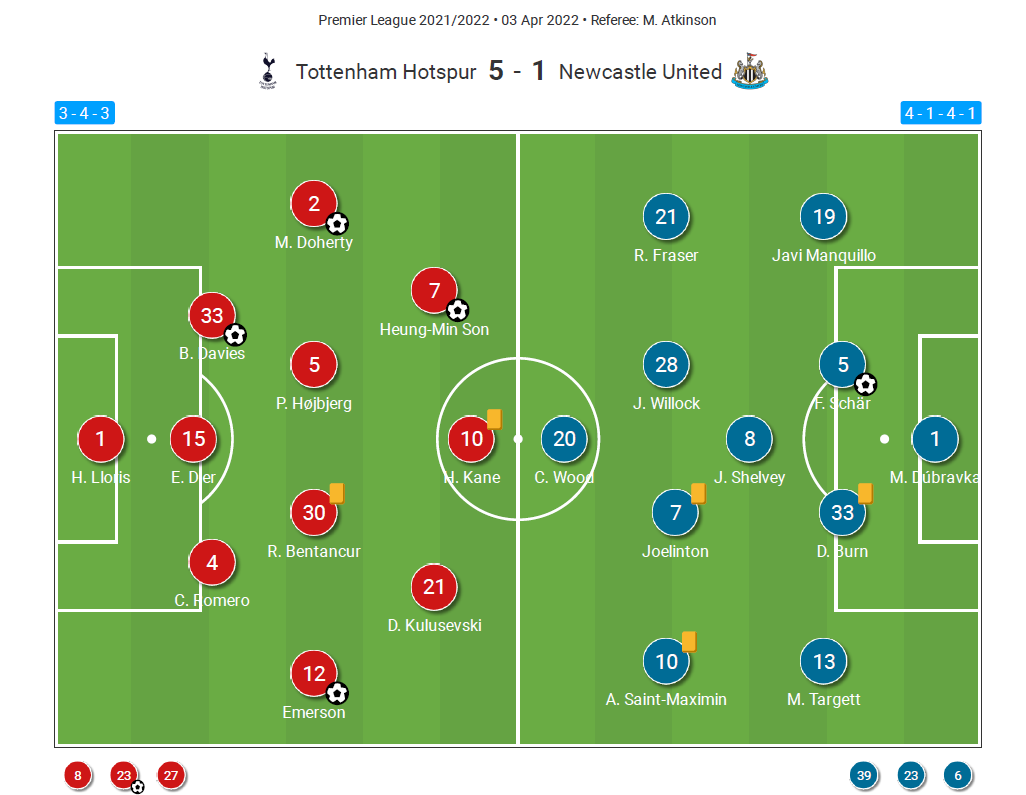 Eddie Howe set up his team to be compact in the first half to try and disrupt Spurs from having joy and finding spaces between the lines. Spurs controlled most of the possession and Newcastle often sat back in a 4-3-3 formation. With Spurs lining up in their 3-4-3 system, Newcastle did not apply pressure on the three CBs when Spurs had possession on the halfway line. In fact, Wood shifted positions in between Højbjerg and Bentancur while Saint-Maximin and Fraser covered the potential passes to the wing-backs. The midfield trio operated very close to one another to close the spaces where Kane usually arrives to receive the ball.

Tottenham’s main strength over the last few games has been stretching opposition defences with Kane dropping deep to receive the ball while Son/Kulusevski make runs in behind the back four looking for a flick or through ball from Kane. Newcastle’s spacial 4-3-3 created huge spaces to the Spurs forwards to operate in the blind spots of the Newcastle midfield and create numerical superiorities. 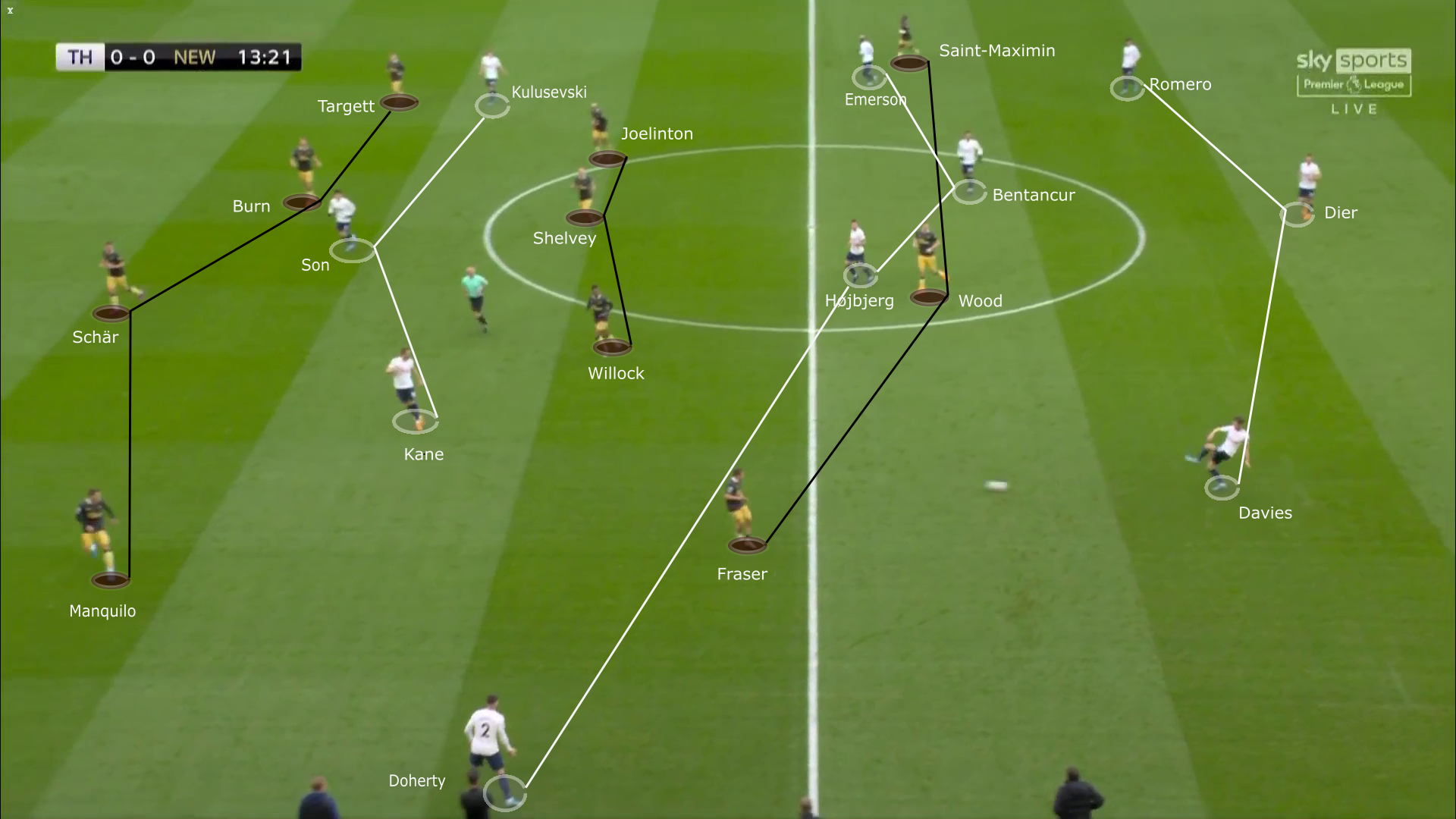 However, when Spurs would get a goal kick, Newcastle sometimes pressed them high to disrupt their build-up phase.

Newcastle pressed in their 4-3-3 from out to in using cover shadows to block off access to the wide players. Shelvey covered the central area where one of the Spurs front players would look to drop and support as an outlet. Willock and Joelinton covered the Spurs double pivot in Højbjerg and Bentancur while also still having access to the wide areas when and if a pass is played.

Tottenham looked to counter the press by creating a left side overload with Davies moving out wide. Emerson stayed deeper to mirror Davies with Doherty given license to push forward. Davies receiving the ball is the cue for the front men to make movements as he is the player tasked with finding the outlet pass. 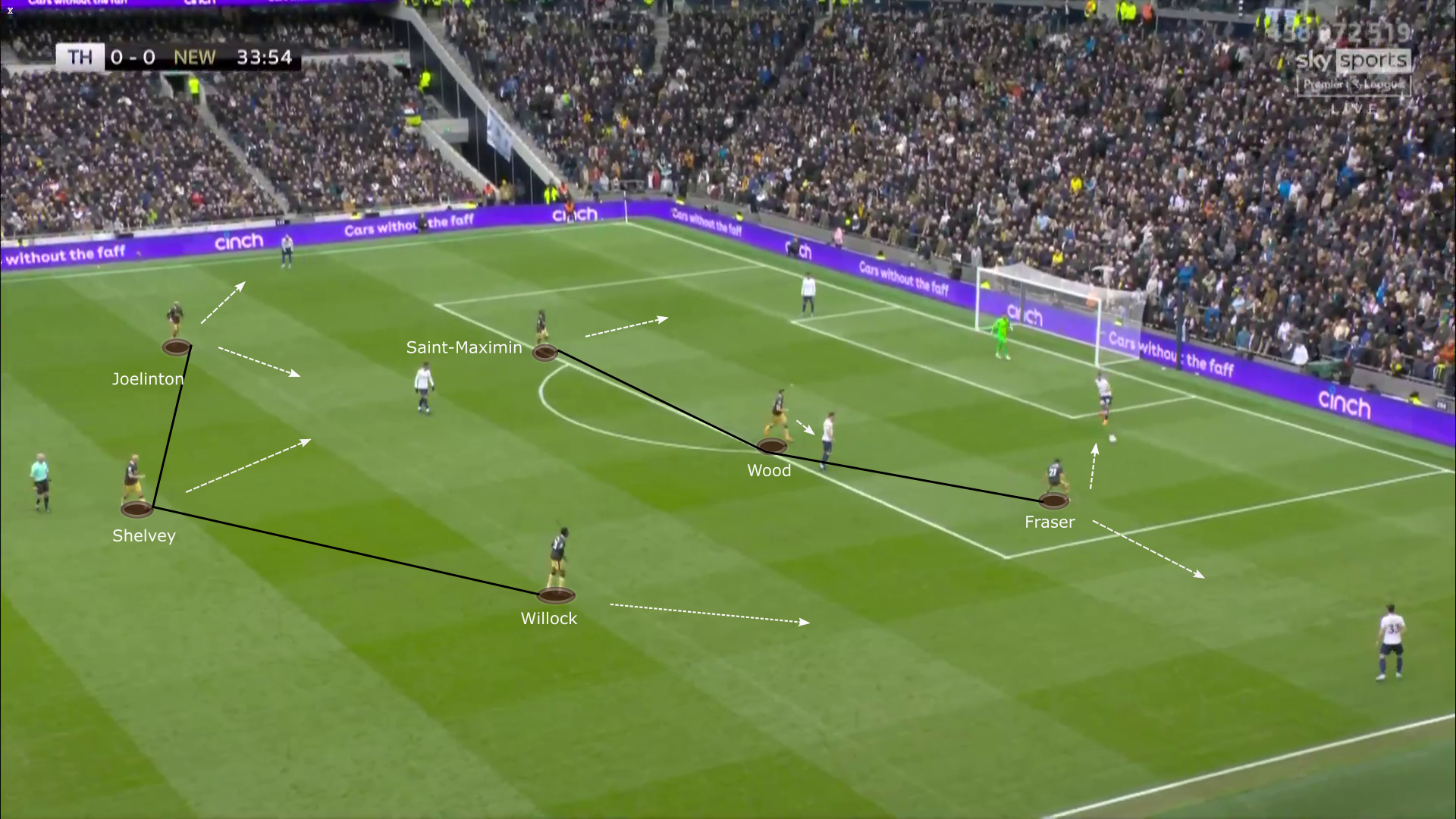 For the majority of the first half, Spurs pinned their opponents in their own half but did not move the ball with enough intent or speed to punish Newcastle.

Surprisingly, Newcastle started the second half pressing aggressively. This time, however, the Spurs players displayed their quality to manipulate and take advantage of the spaces to score two quick-fire goals.

At 3-1, Howe shifted to a back five with Shelvey dropping back as the third CB. 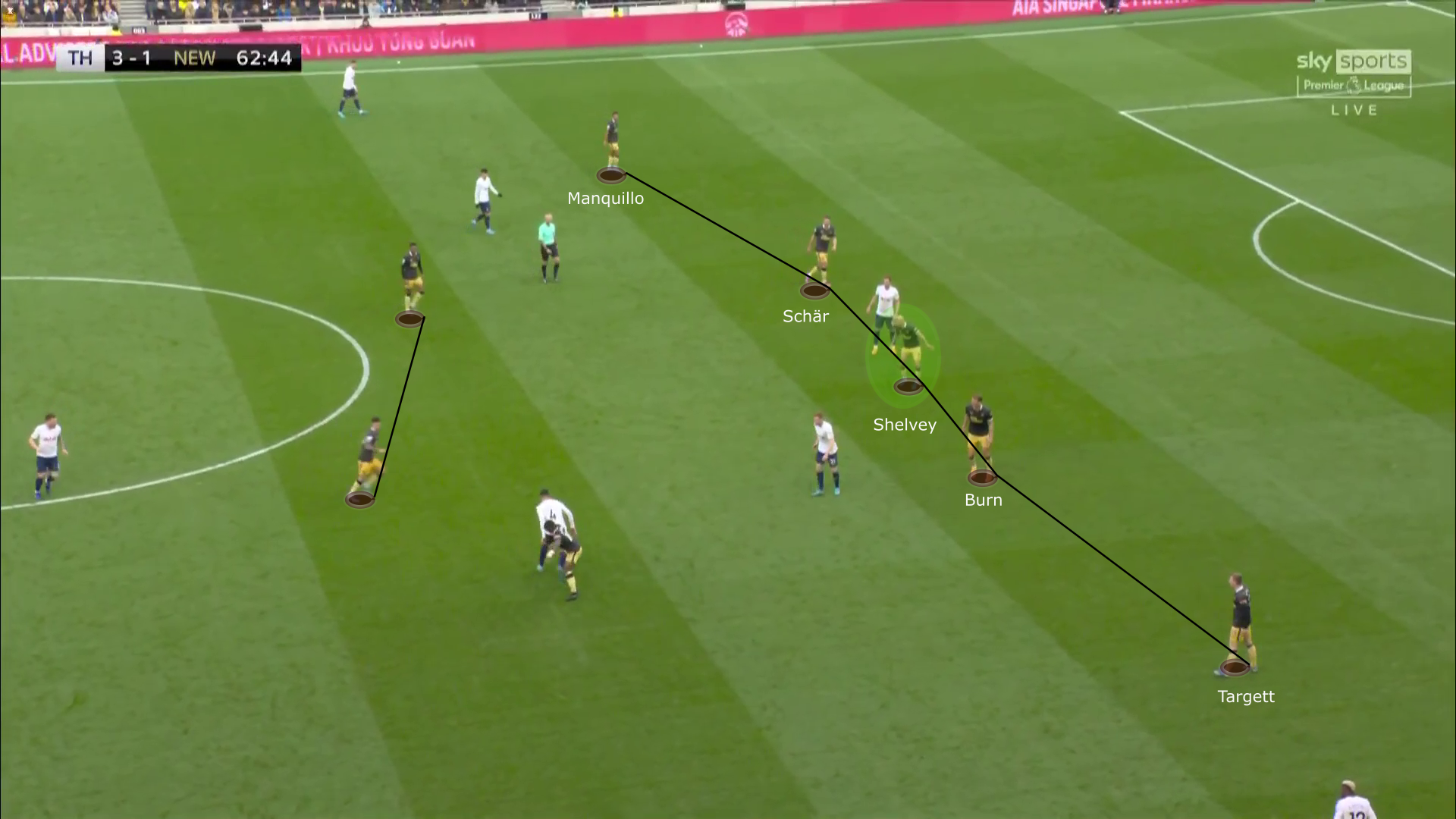 At this point, Tottenham were picking Newcastle apart by building up from the back, breaking the press and surging towards goal. Even at 4-1, the away side maintained their high press as seen below. With tired legs and low spirits, the smart thing would have been to shut up shop and limit the damage.

Here, Davies plays it to Doherty who finds Højbjerg in acres of space. Substitute Bruno G. should be closing Højbjerg down but is stood miles away not contributing to his team’s tactical plan.

10 seconds later, Kane is completely free in the middle of the pitch as he dinks a ball over the top to free up Son. Newcastle’s defensive structure is all over the place at this point. Spurs finished the game with an xG of 4.10. 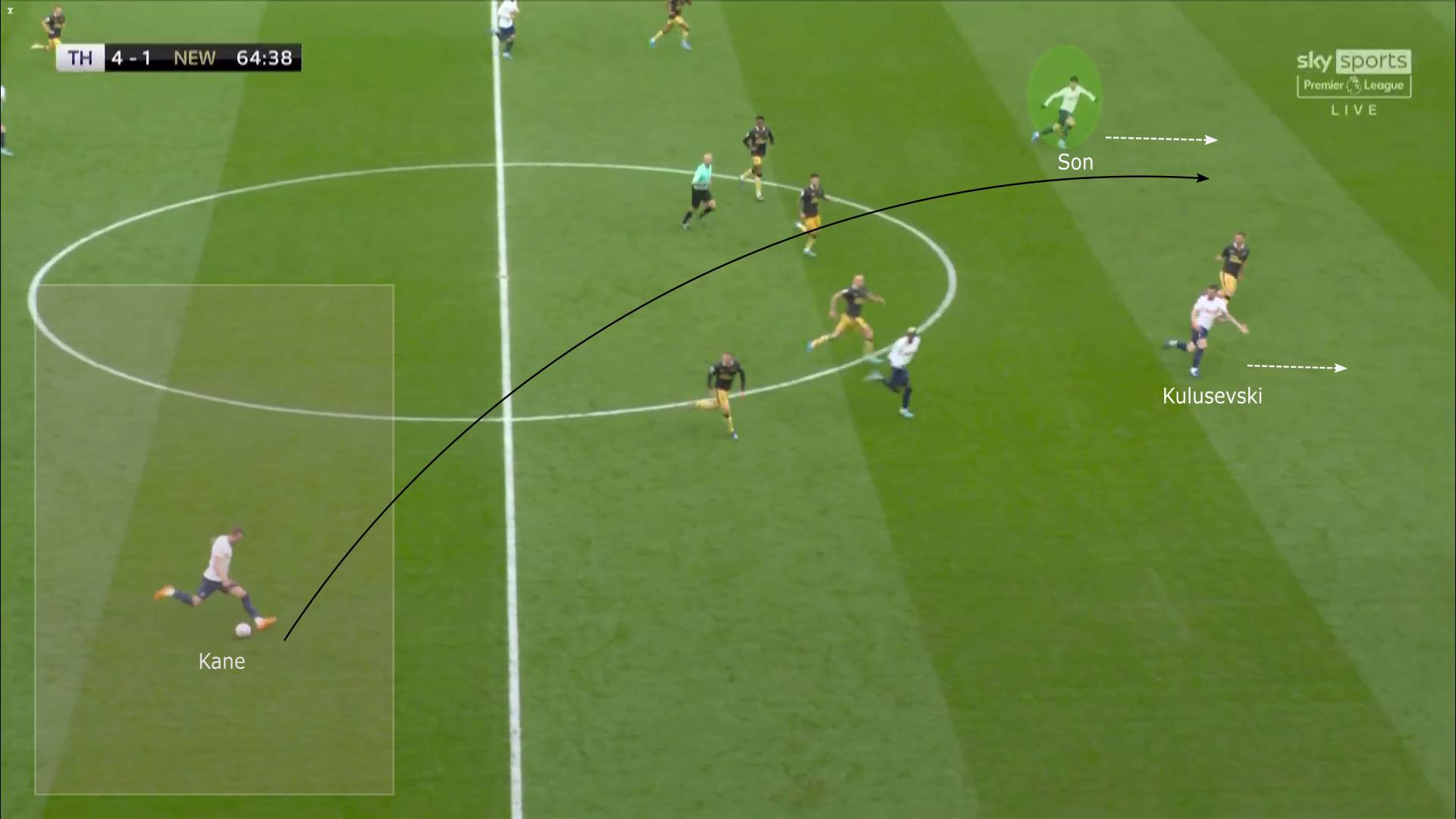 An important and vital aspect of Conte’s system of play throughout his managerial career is the use of wing-backs. Doherty and Emerson supplied all the width playing very high, with Kulusevski and Son shifting into more narrow positions to act as number 10s. Højbjerg dropped in between the central defenders to allow Davies to step higher and create dual width with Doherty. This produced major problems for the Newcastle defence as the fullbacks are not quite sure who to mark. 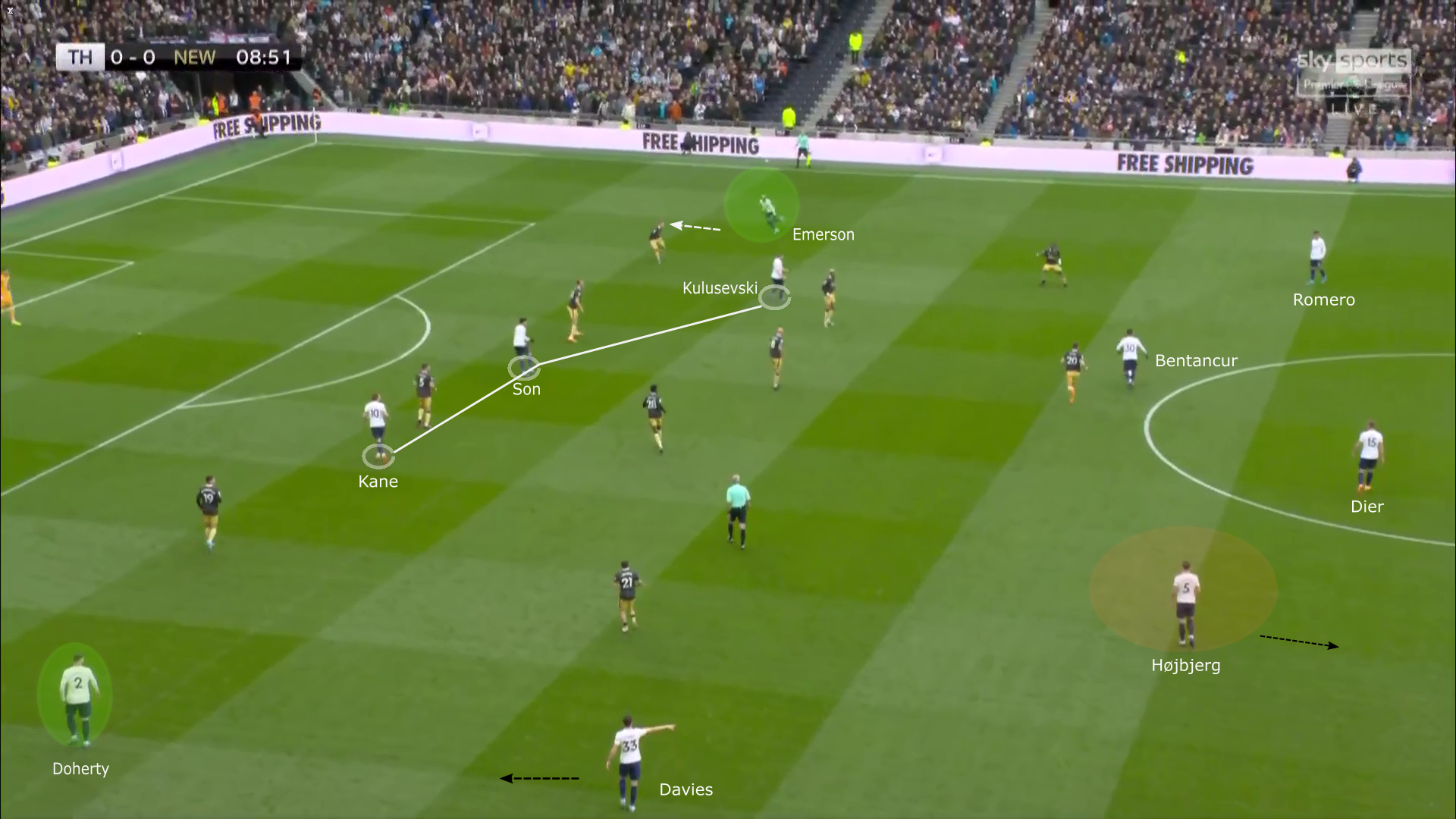 Doherty has been superb over the last couple of months. Conte reintroduced him into the fold after a tough start to the season and he has been a player revitalized, scoring two goals and providing four assists in 2022. To further highlight their effect, both Doherty and Emerson scored in this game with the latter’s goal being assisted by Doherty himself.

As seen below, Doherty is in possession on the left flank as Emerson makes his way into the box. What’s shocking is how easy Newcastle made it for Spurs to create this goal with Murphy outnumbered 2v1. Doherty plays a simple one-two with Kulusevski and his cross finds Emerson in the box to finish. Willock and Bruno G. should be closing down Kulusevski and Son respectively but are caught ball-watching on the edge of their box. 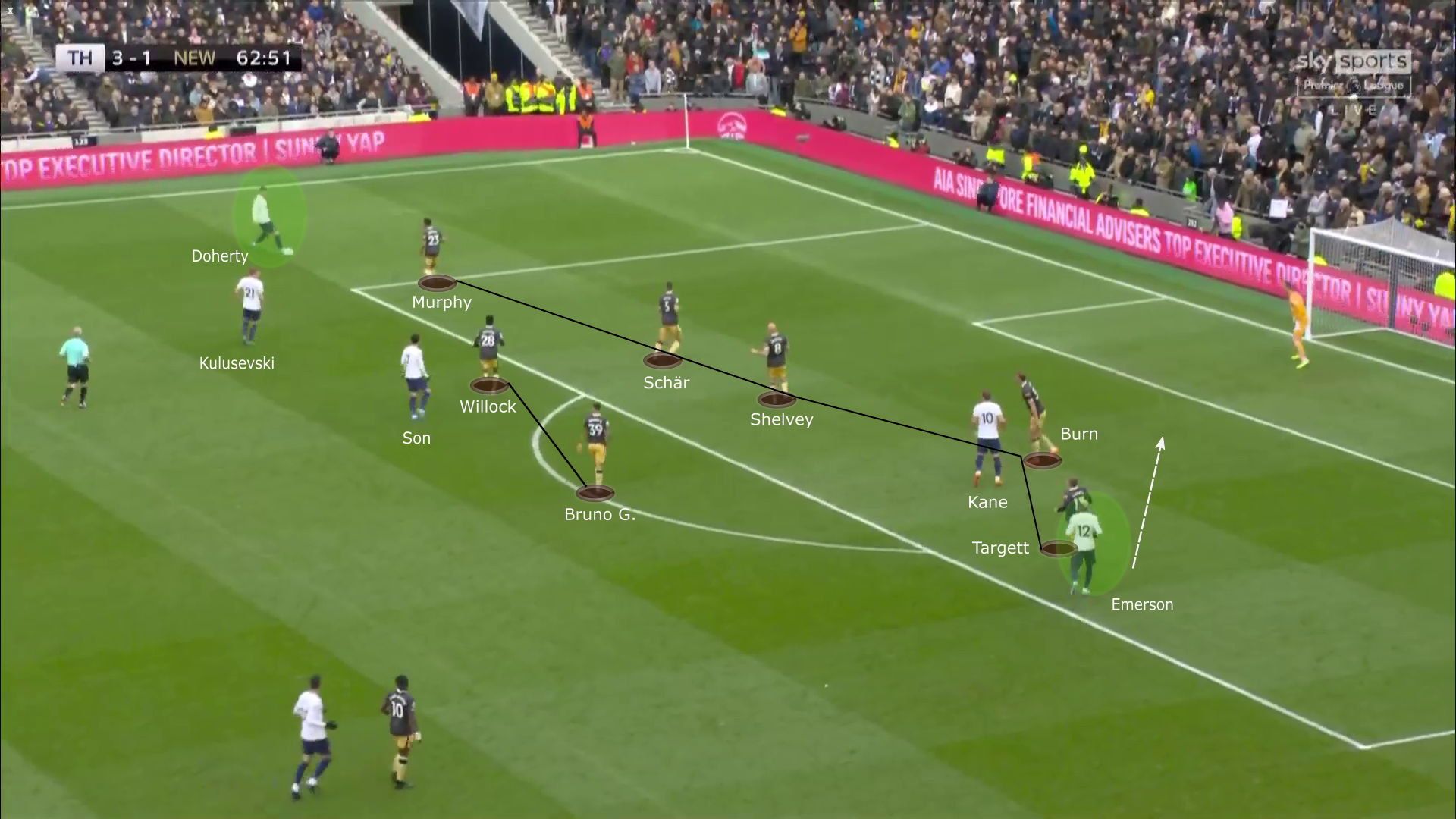 The wing-backs also contribute significantly in the build-up phase for Spurs. The wide positions occupied by Doherty and Emerson in this game allowed Spurs to make the pitch bigger, stretching the opponents, and play the outlet ball through the middle.
On offensive transitions, the two defenders would often be the point of outlet themselves. In the below image, Spurs win the ball back and Newcastle do well to close down the spaces and cut passing lanes. All the Tottenham players are under pressure. Dier is signalling to Doherty to play it back to his keeper. But Emerson spots the space and breaks free from Saint-Maximin. Doherty has no trouble finding him with a long cross-field ball. 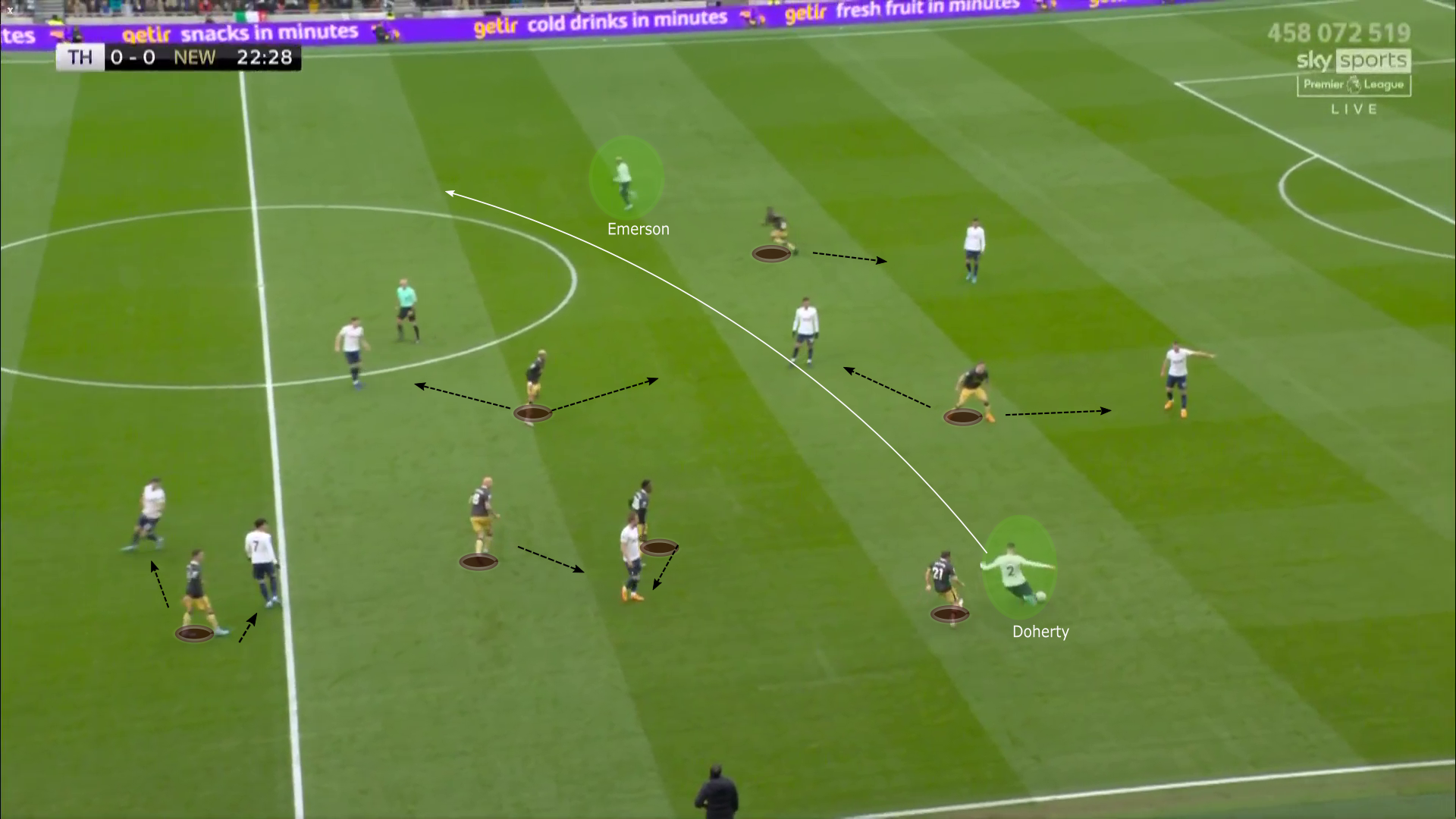 Since the arrivals of Bentancur and Kulusevski from Juventus in January, Spurs have become a more settled side. The front five of Højbjerg, Bentancur, Kulusevski, Son and Kane have started seven of the last eight league games. Signs are evident that the team is beginning to kick into gear under Conte’s style of play. Consistency in the team selection is key to achieving that.

A major factor in all of this is of course the form and class of Harry Kane. The fact that he was named man of the match in a 5-1 win without even scoring shows his influence on the team. Kane has been dropping deeper in recent times to take the ball to feet and be involved in the general play and flow of the game. He has provided 20 Premier League assists since the start of the 2020/21 season, emphasizing the development in his game from an out and out number nine.

“He can play as a 9, he can play as a 10, he’s an incredible player,” Wayne Rooney said of Kane on Monday Night Football. “It’s almost like Totti when Totti was at Roma. Roma used to play this way and Totti would come deep, and he had runners running beyond him.”

The graphic below highlights Kane’s attempted through balls in the league this season. He ranks 7th on the list. No other striker ranks in the top 20. 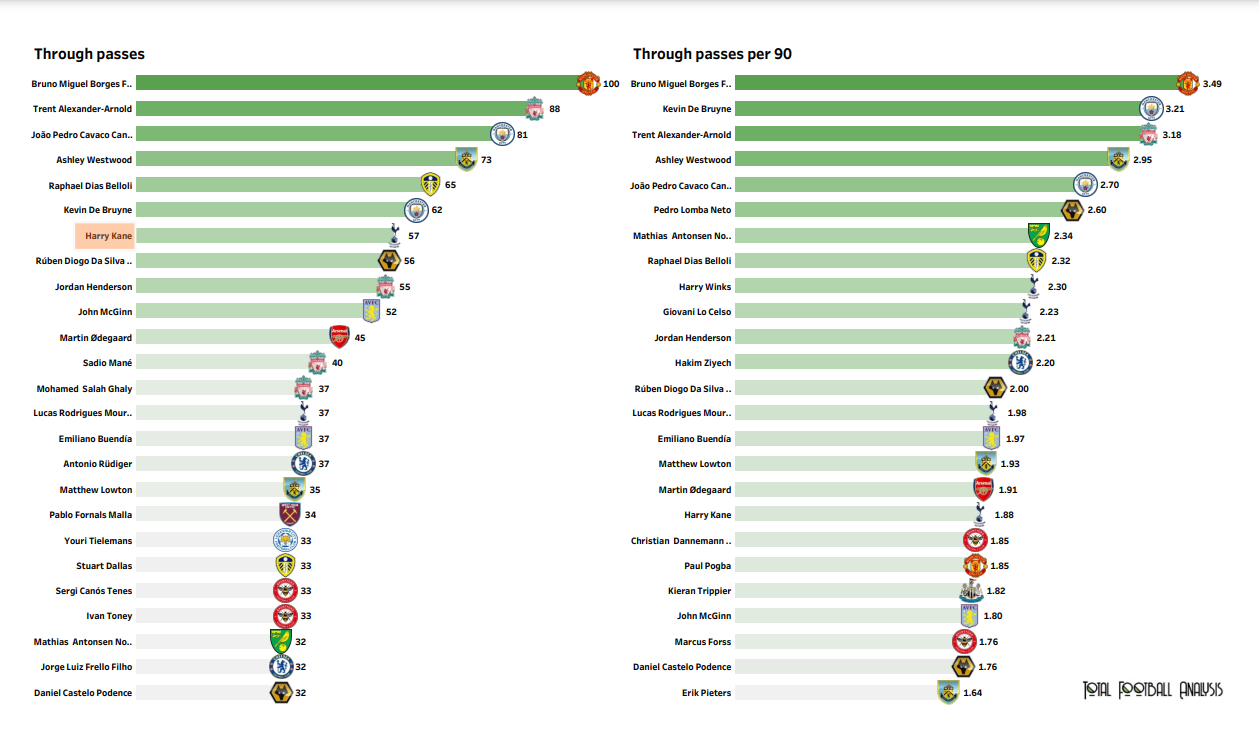 For the second goal, Kane collects the ball between the lines as the furthest player forward. This is a cue for Son, Kulusevski, Emerson and Doherty to make forward runs into the box. Kane makes his way to the right-wing area with Son driving into the middle of the box to distract Manquillo and Schär, freeing up Doherty on the far side. 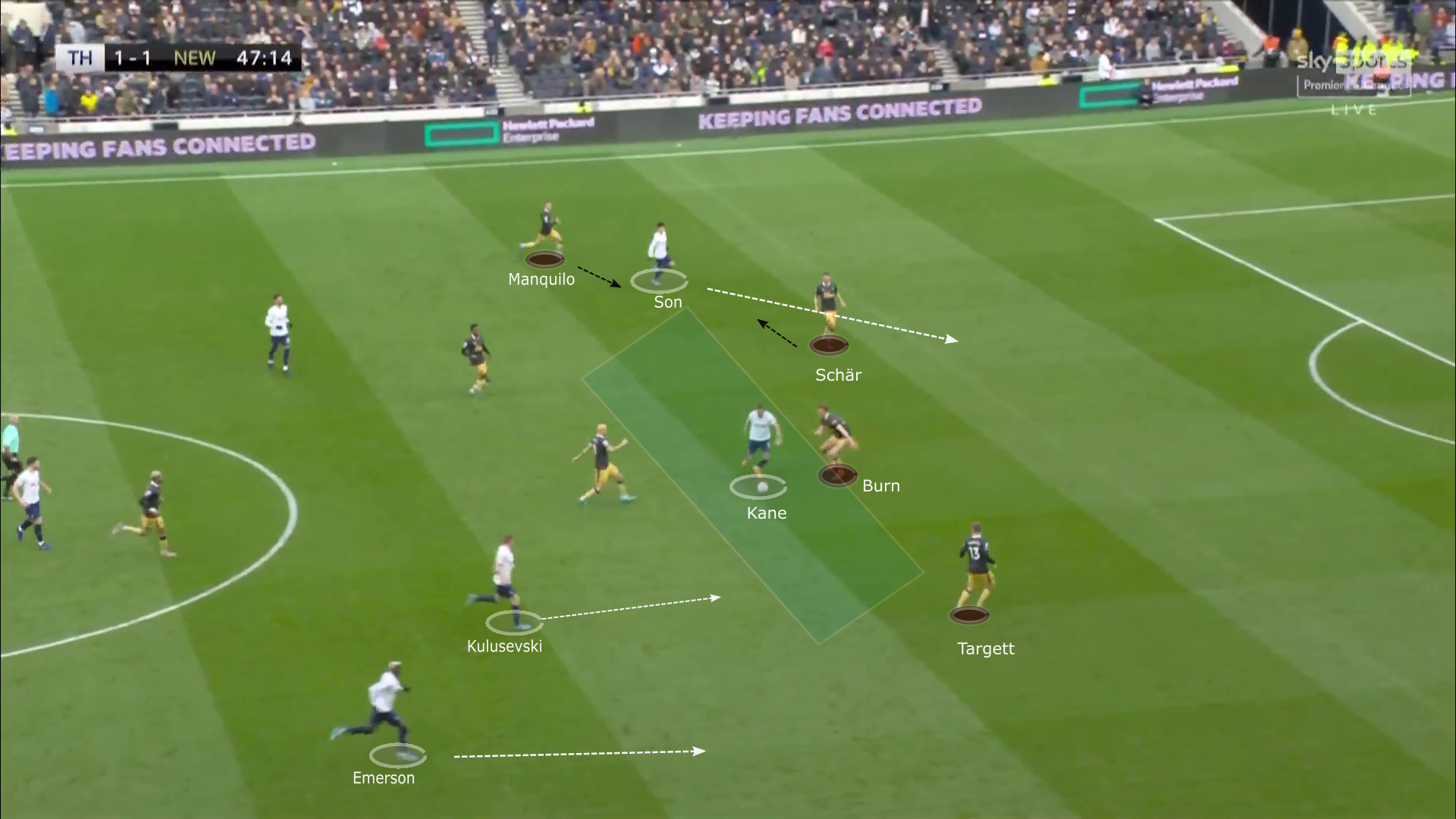 Kane is now the furthest player backwards as the rest have made runs beyond him. He whips in an inch-perfect cross and Doherty pounces at the back-post to nod it in. 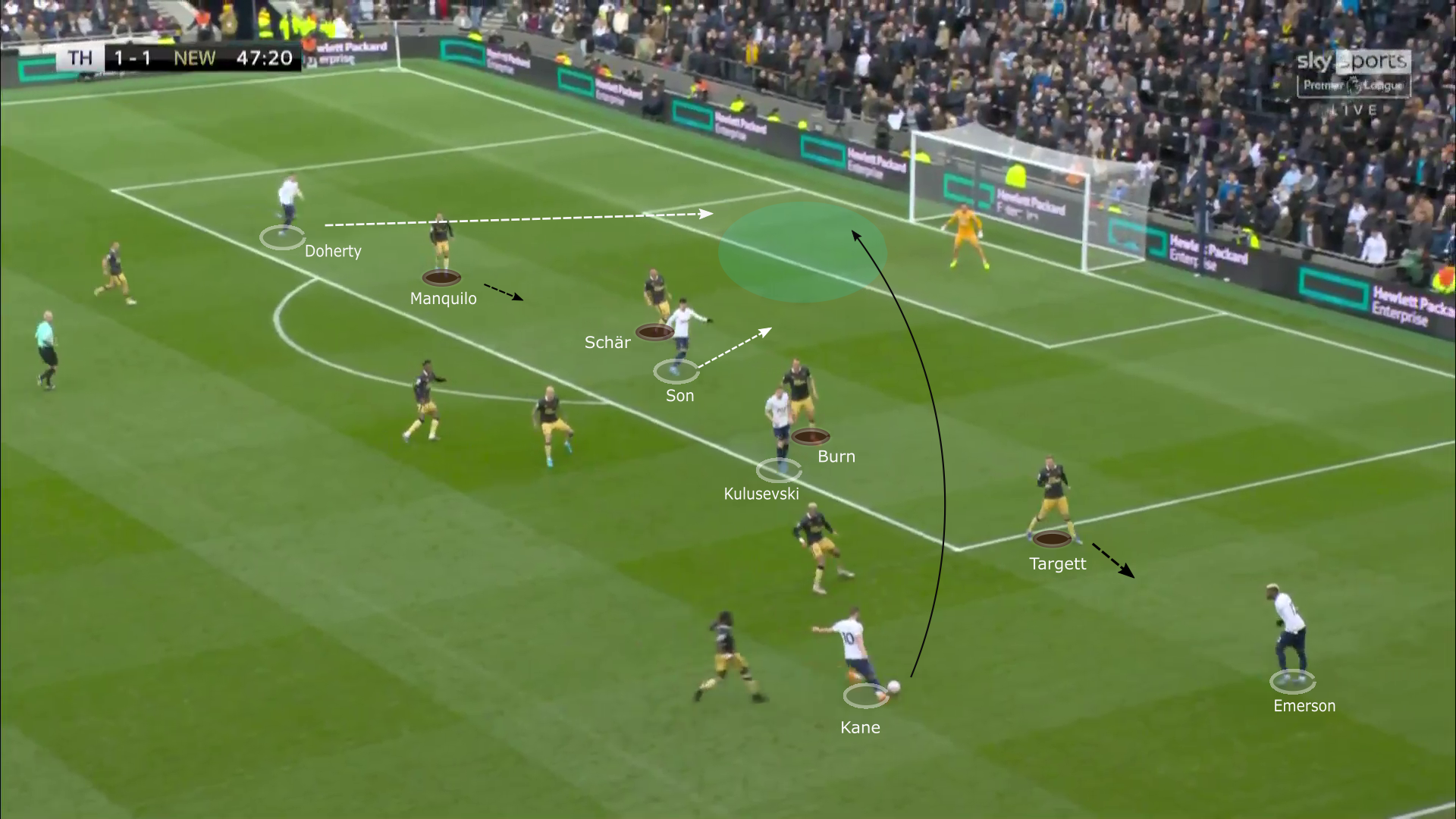 The 3rd goal is a proper team goal. The ball starts right from the back with Lloris and reaches Højbjerg. Kane and Kulusevski both drop deep and drag out the Newcastle CBs, forcing them to jump into midfield. The midfield three of Newcastle are still too far forward. Højbjerg feeds the ball inside to Kulusevski who then passes it to Kane in the playmaker role. 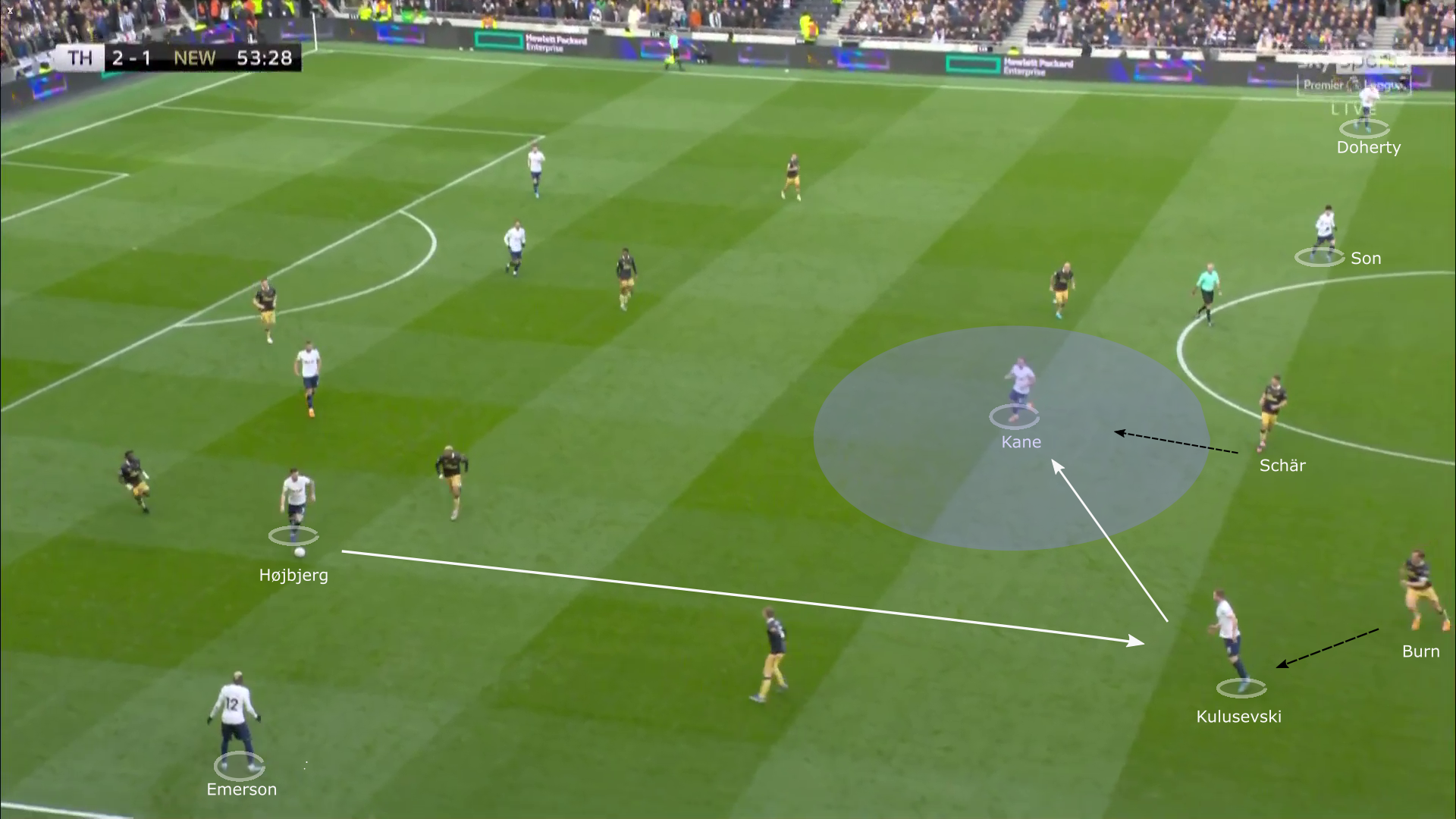 Kane controls the ball with time, space and three great passing options. Doherty, Son and Kulusevski are all on their bikes and running into the gaping spaces as the Newcastle back four is broken. Kane spots the run of Son but shifts his body in the last second as Schär comes to close him down. Instead, he plays a delightful through ball into Kulusevski who takes it in his stride and provides the assist for Son. 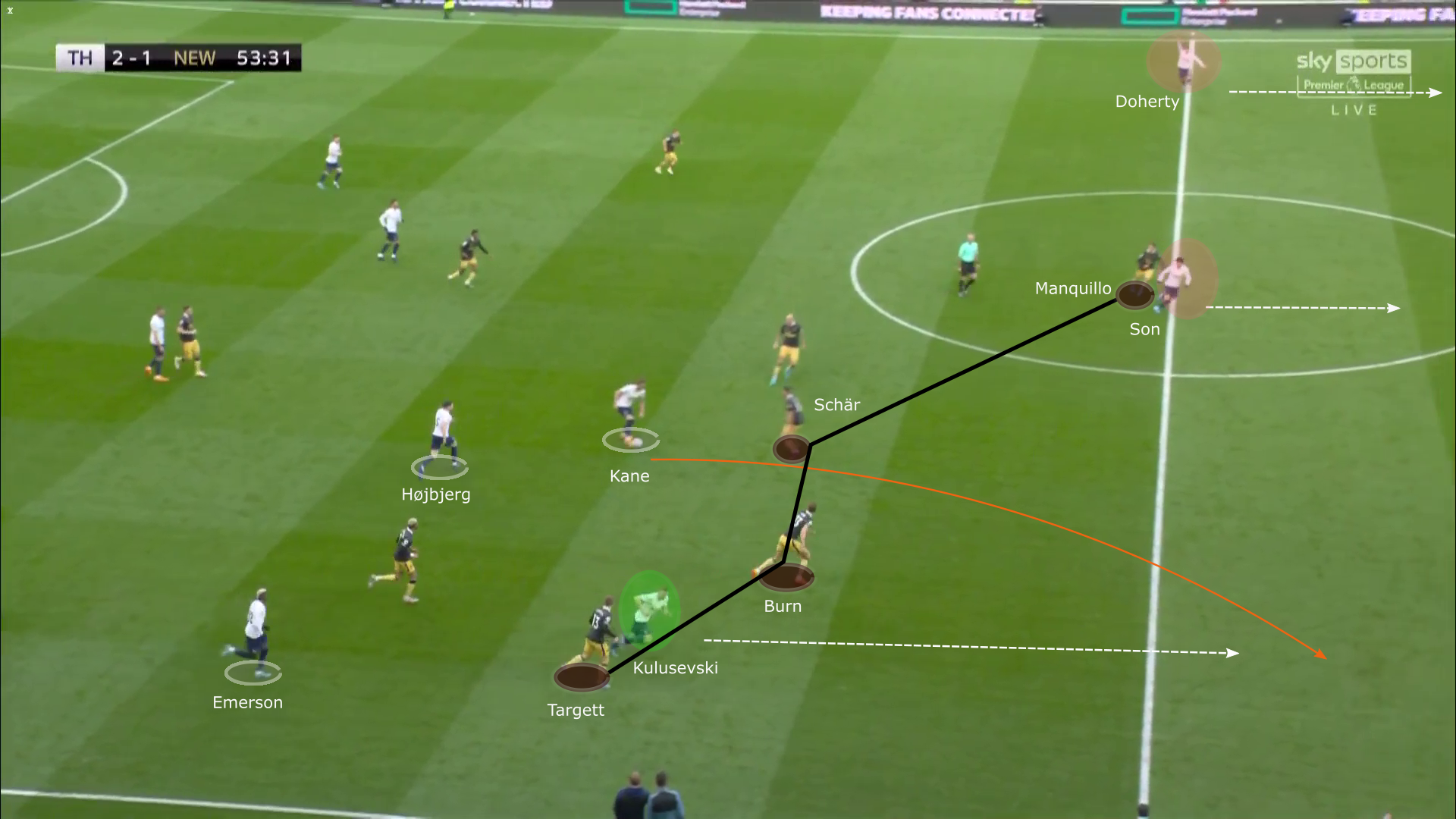 Most notably, the Spurs front three have been in superb form since the arrival of Kulusevski in January. Tottenham have bagged 30 goals in 13 Premier League games in 2022, the most in the league.

That feat is mainly down to the three front men who have 31 goal contributions between them.

Tottenham racked up a vital three points in their fight for Champions League qualification. They now sit in 4th place ahead of Arsenal on goal difference while having played an extra game. The Gunners losing to Crystal Palace on Monday night by a 3-0 scoreline has only given Spurs extra encouragement. Antonio Conte has described the end to the season as “eight cup finals” and any hopes of Tottenham maintaining this momentum lies with the form and fitness of the most lethal attacking partnership in Premier League history in Son and Kane. The North London derby in May now seems more and more like a defining one.

As for Newcastle, the reality is that their early form after the January transfer window has all but guaranteed their safety. But that does not mean they do not have something to play for. The new Saudi ownership will be looking at the squad and already planning for heavy investment next season. The final league games may indicate who stays on and who departs. The players are now playing for their futures at the club.