Sunday brought the third Derby d’italia meeting of the season as Juventus hosted Inter at the Allianz stadium.

With the Serie A table still being extremely tight, everything is open in terms of who will win the Scudetto.

Juventus came into the match sitting in fourth place one point behind Inter who occupied third.  The Bianconeri came into the match unbeaten in their last sixteen league matches. They have closed the gap to the top of the table to seven points and had their eyes firmly set on making a late push for the Serie A title.

At the beginning of 2022, Inter looked odds on favourites to defend their Serie A crown. However, two wins in nine league matches have seen them drop to third place, with the Nerazzurri sitting six points behind first-place Milan.

It turned out to be a very intense and tight game between two highly coached teams. It was Inter who managed to scrape the victory and maintain their title challenge.

In this article, I provide a tactical analysis of the game and examine the key tactics used by Massimiliano Allegri and Simone Inzaghi.

Juventus were without Luca Pellegrini as the Italian international was serving a one-match ban after picking up his fifth Serie A booking of the season. Leonardo Bonucci and Denis Zakaria both returned to the bench.

Massimiliano Allegri switched the Juventus formation from a 4-4-2 to a 4-2-3-1, with Alvaro Morata moving to play on the left flank. This was a clever move as out of possession Morata enabled Juventus to try and restrict Inter’s build-up play and attacking threat down the right-hand side.

Simeone Inzaghi set Inter up in their usual 3-5-2 formation. Marcelo Brozovic’s return was fundamental for Inter. Not just in this game but for the remainder of the season. The Croatian midfielder allows Inter to build up from the back with flexibility. His ability to drop into different spaces enables the team to beat the opposition’s press effectively.

Stefan De Vrij was still missing for Inter. He was replaced Danilo D’Ambrosio.

Juventus started the game on the front foot. They played the game at a high tempo and didn’t allow Inter to settle into any kind of rhythm

They looked to play through each third of the pitch quickly, with quick passing and interchanges of position. This allowed Juventus to create space and attack in numbers. This was an unexpected approach from Massimiliano Allegri.

Inter usually defend their half in a solid 5-3 structure, forcing the opposition into areas of the pitch with pressing triggers. 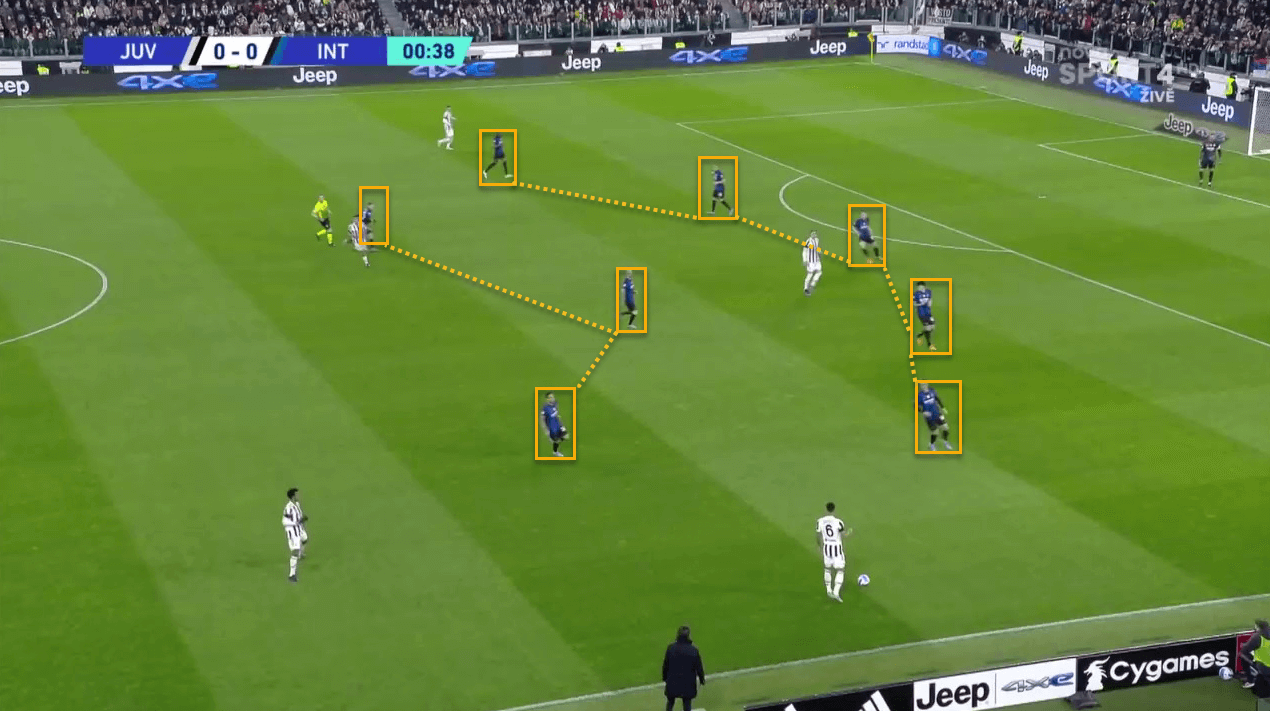 During their attack, Juventus looked to counter this by attacking in a 2-4-4 shape. Allegri allowed both full-backs and both centre midfielders to join the attack at different stages, moving with fluidity in Inter’s half.

This was disrupting Inter’s defensive structure. The wing-backs were getting pulled from the defensive line and leaving space in the wide areas.

As you can in this passage of play below. You can see how Inter’s left wing-back Ivan Perisic has been drawn towards Juan Cuadrado as he has come short 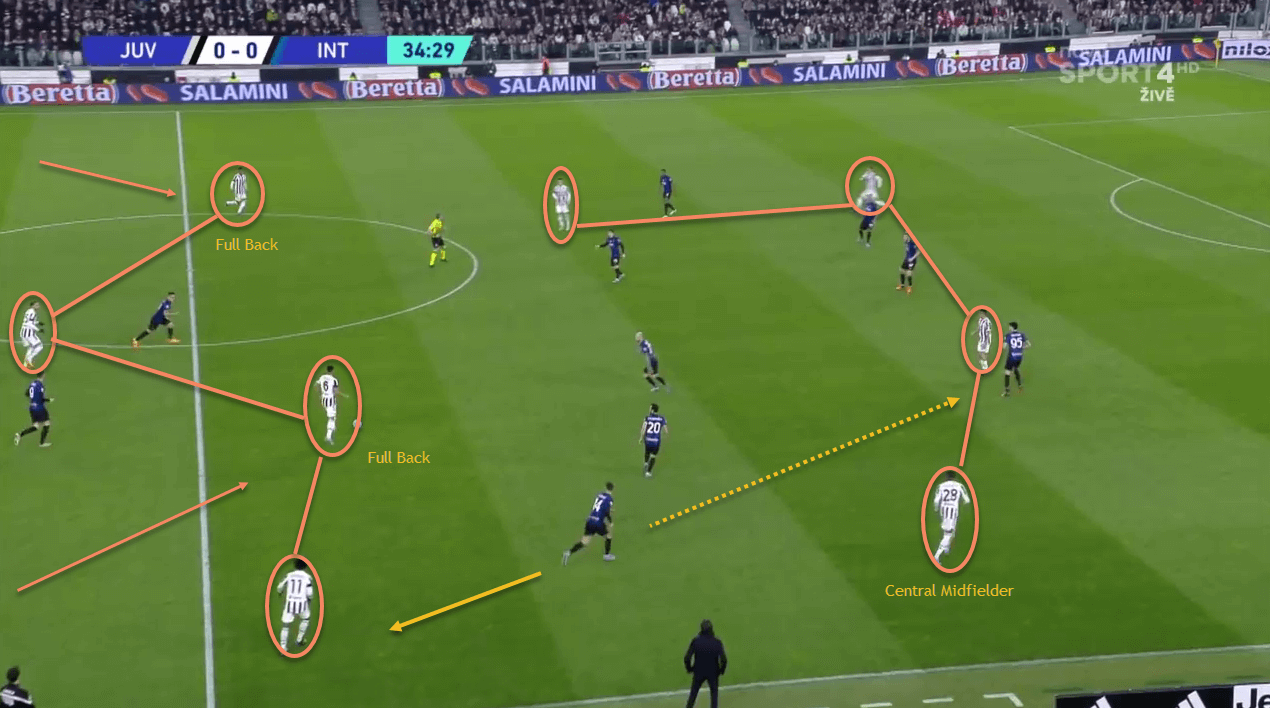 As this movement has happened Denis Zakaria the Juventus central midfielder has moved out to the right wing and the Juventus right full-back Danilo has moved inside.

This rotation of positions and movement has pulled Perisic out of Inter’s five-man defensive line and has opened the possibility for a 2v1 overload. It also allows Juventus to maintain the 2-4-4 attacking structure.

This was happening on both flanks. Another instance below shows the two Juventus attacking lines of four.  This time Alvaro Morata is holding the ball pulling both Denzel Dumfries and Danilo D’Ambrosio from the defensive line whilst Alex Sandro goes beyond him attacking the space and replacing him in the front four. 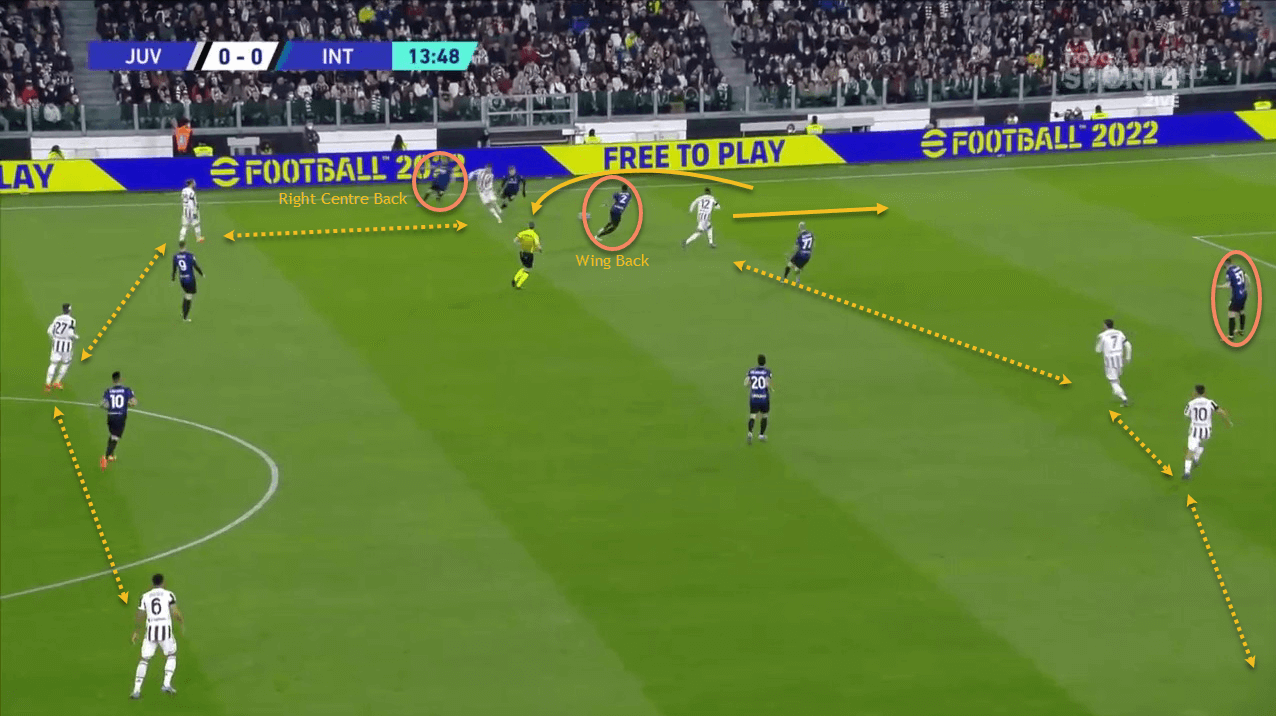 This has a knock-on effect right across Inter’s defensive third. Firstly, it pulls Marcelo Brozovic from midfield as he attempts to track Sandro.  Secondly, it creates an overload on the edge of Inter’s penalty area.

Due to how Juventus started the game, Inter were unable to build from the back with any kind of purpose.

Juventus were pressing high up the pitch as a team but not pressing the man in possession. Instead, they were looking to cut off the central passing lanes forcing Inter into the wide areas and long balls.

The reason behind this was to stop Inter’s midfield three, particularly Marcelo Brozovic from controlling the game. As you can see in these two images. 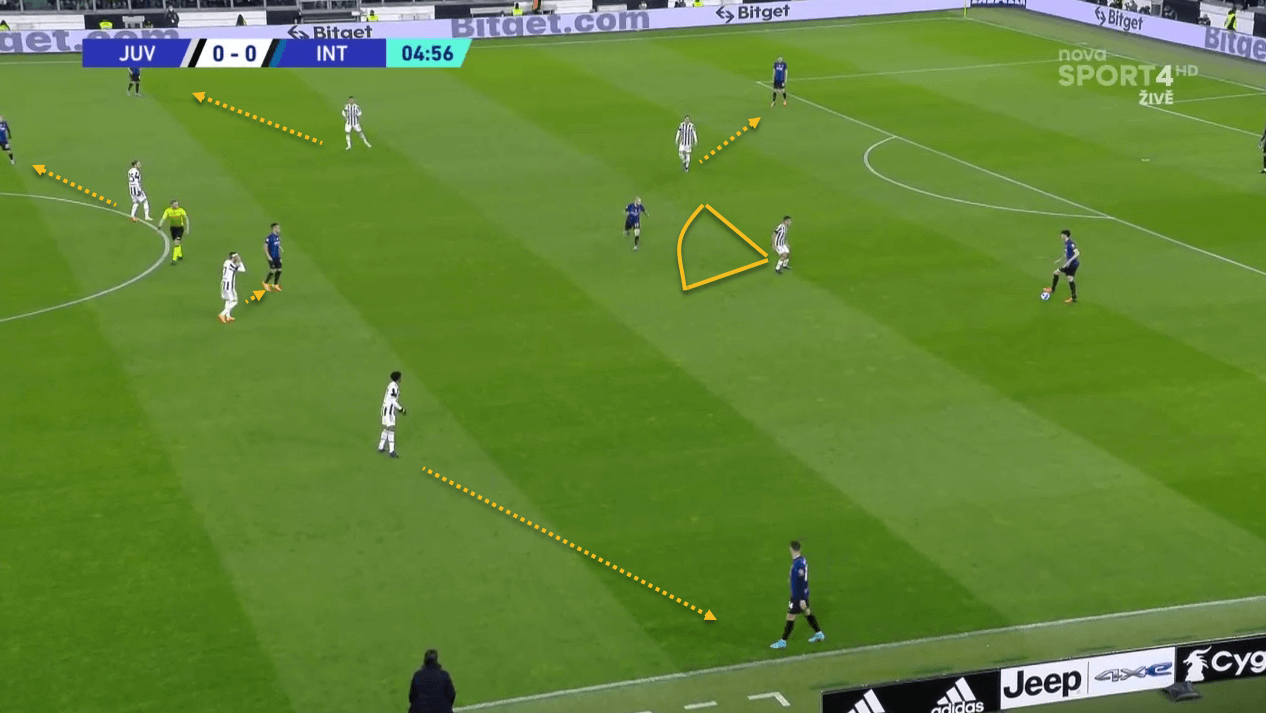 Juventus deployed Pablo Dybala as the man to stop the ball from getting to Brozovic during Inter’s build-up. You can see this in the image above. Dybala is not pressing the ball.  he has positioned himself to cut the passing lane to Brozovic off from the ball carrier, Bastoni. 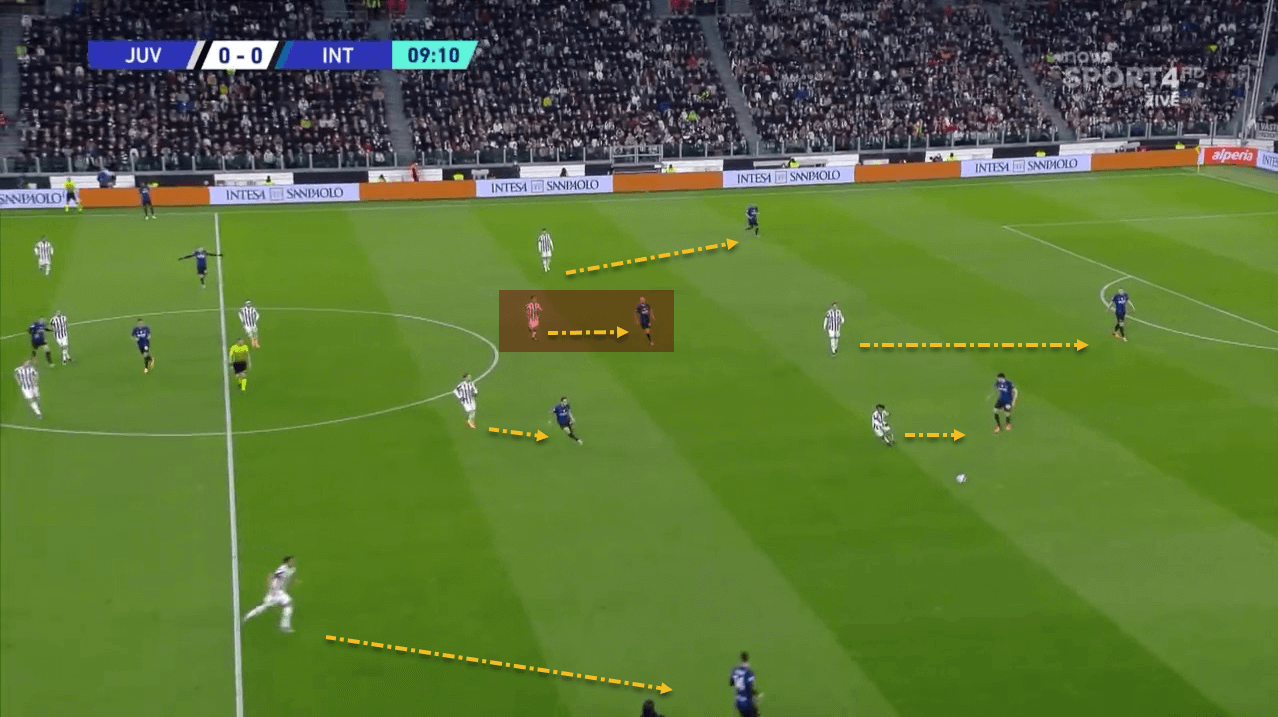 Therefore, Juventus were getting so much success in causing problems for Inter at the beginning of the game. Inter were losing possession of the ball through long balls and not being able to play through the centre of the pitch.

Every time Brozovic did get on the ball in the early stages, he was only able to recycle possession.

As the game went on Inter started to gain more and more control over their play. Their build-up play started to become more progressive, and they started to keep the ball better.

Simone Inzaghi made a minor but vital tactical change. This was Marcelo Brozovic dropping into the defensive line during the build-up phase and changing the structure of how Inter were building up.

Marcelo Brozovic would drop into the defensive line meaning one of the centre backs would push wide.

This enables the wing back on the appropriate side to push higher up the pitch. The example below shows how Inter changed their build-up. 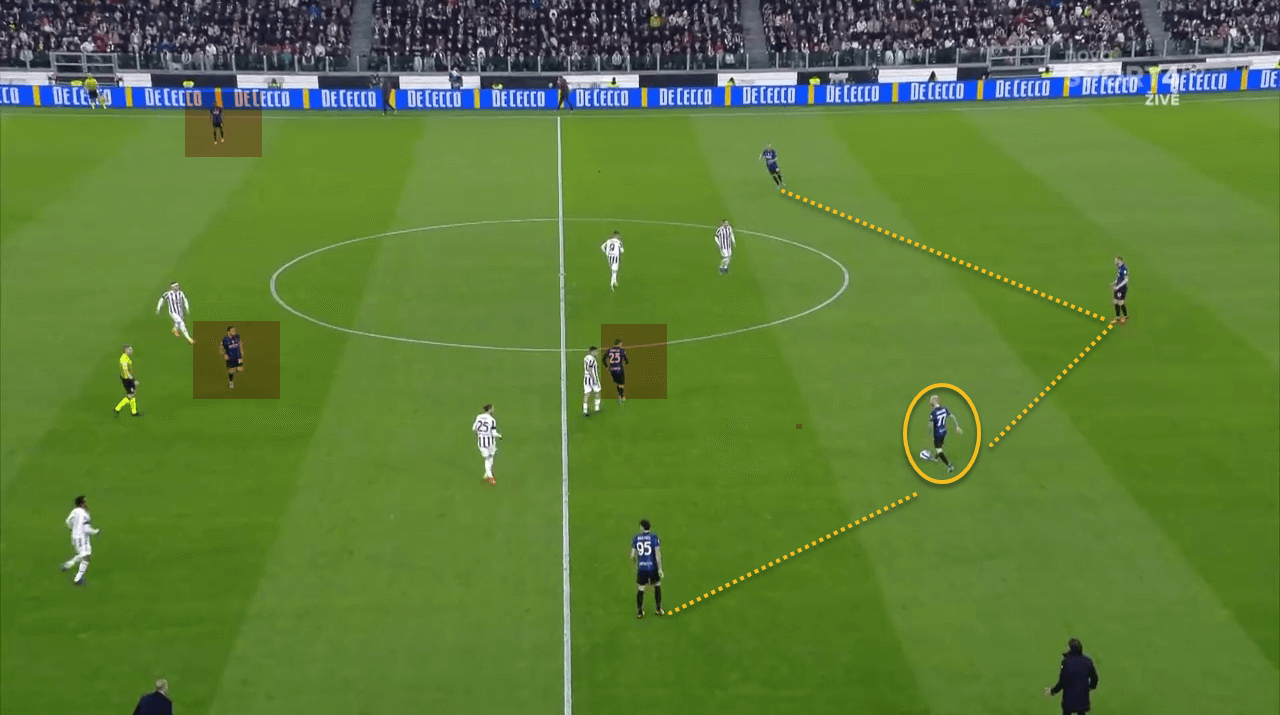 Immediately you can see how many more options there are available for progression. Denzel Dumfries pushing further up on the right-hand side maintains Inter’s width.

Brozovic can switch the play over to Dumfries on the right-hand side, he could play in Barella who is moving into space in the central channel, or he could play a straight pass to Calhanoglu and cut out the Juventus midfield in the process.

Switching to a back four for the build-up in this way allowed Marcelo Brozovic to have the play in front of him during possession.

From this point, he and Inter started to control the tempo of the game. Instead of just being able to recycle possession, he was able to start progressing the play into the midfielders and the wing-backs.

Once Brozovic dropped into the defensive line, Nicolo Barella was dropping into the space he vacated. This movement was pulling Juventus midfielders with him and creating gaps in their defensive lines.

Here you can see Barella dropping into the space and Adrien Rabiot following him and leaving space behind him. 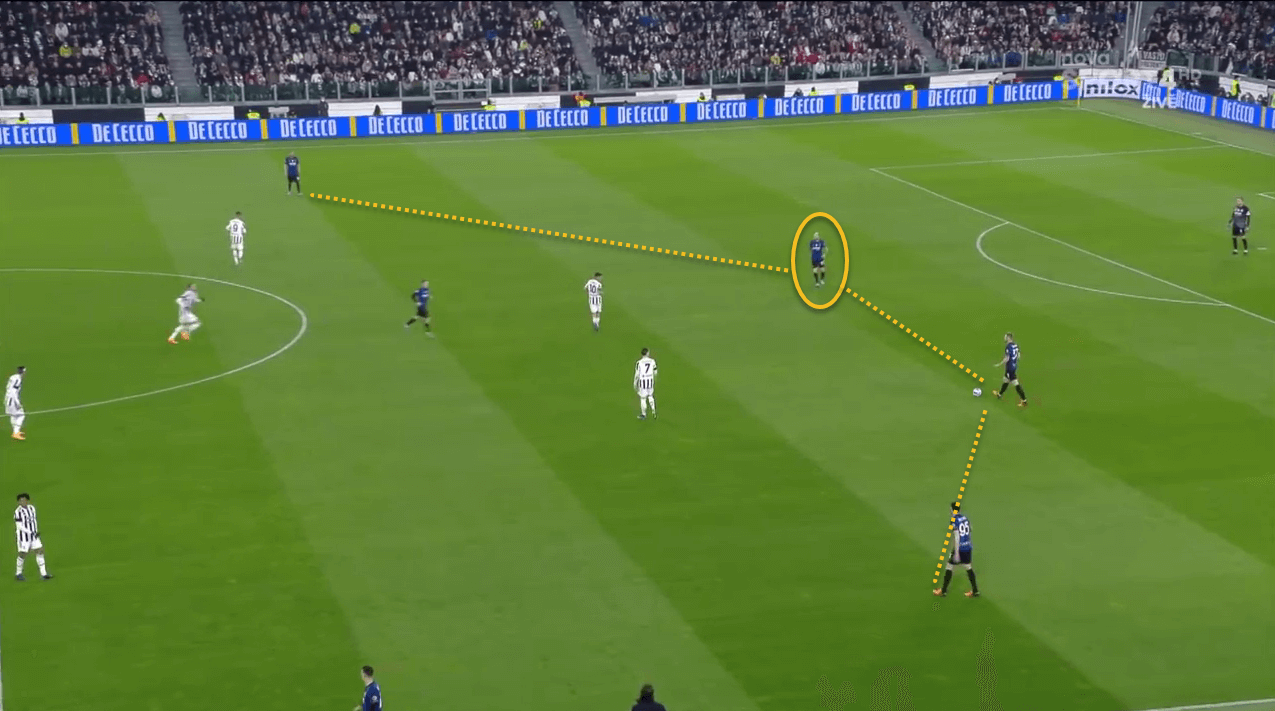 Once Inter scored their goal, their overall performance improved all over the pitch. They controlled possession a lot better. They progressed through each third of the pitch with more conviction in their passing.

When Simone Inzaghi’s men lost the ball they were very efficient at controlling the spaces. Their defensive structure was a lot more cohesive. They were able to maintain the accustomed 5-3-2 shape a lot better. Allowing Juventus to have possession in areas of the pitch they couldn’t play through. As you can see in this example below.

Inter’s defensive shape is set and Juventus are holding the ball in an area Inter is happy for them to have it. The only option Rabiot has here is to make a short pass to Chiellini or pass it forward to Mattia De Sciglio who is being marked closely by Matteo Darmian. 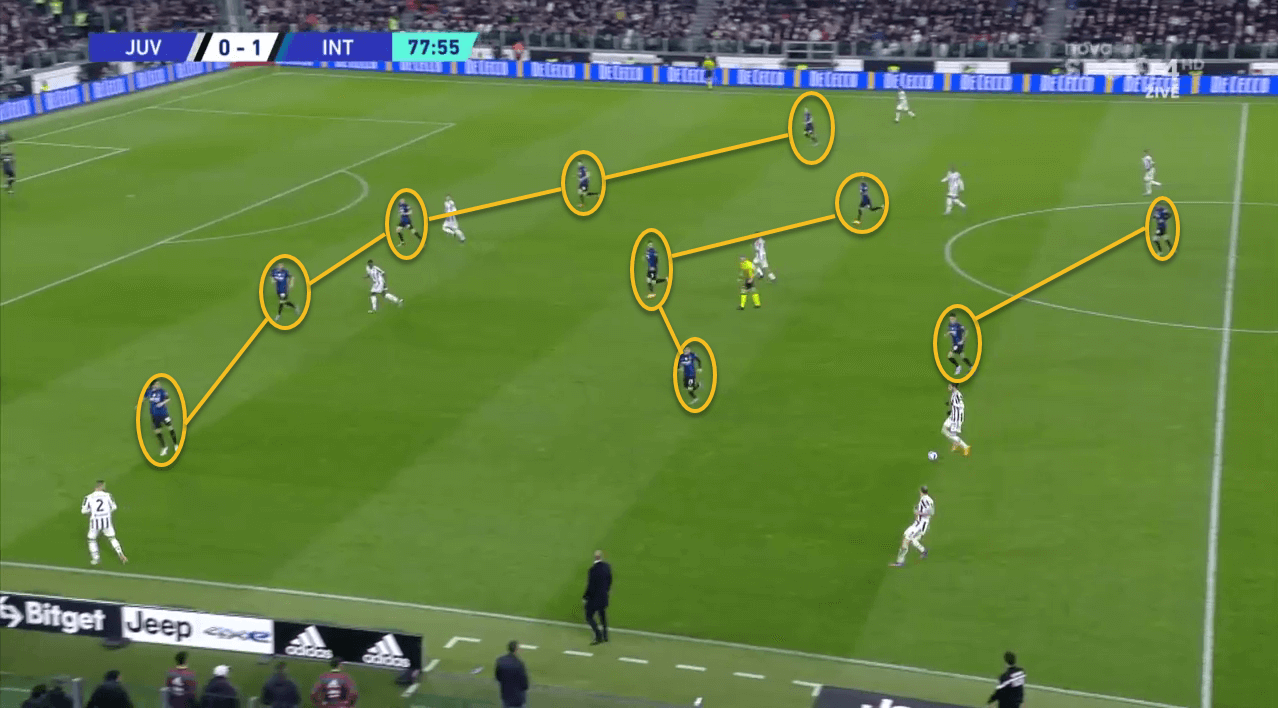 Massimiliano Allegri will be disappointed that Juventus didn’t show more composure in the second half. They tried to maintain the pace they played within the first half but as the half went on, they become more desperate to score.

This played into Inter’s hands more and they were able to manage the game. By holding their shape at the right time, it meant that Juventus could only play into the wide areas before going long.

This example shows how Juventus progresses the ball down the left-hand side. Sandro has then passed the ball inside to Chiellini who has no option in front of him because of the positions that Brozovic and Canhanoglu take up. Chiellini is forced to play his pass backwards to De Ligt who then passes to Danilo.

Eventually, Juventus attempted to play the ball over the top of Inter’s defence and out of play.

Massimiliano Allegri and Juventus will feel hard done by. The Bionconeri played one of their best games of the season.

Winning this match in the manner they did will provide a psychological boost for Simone Inzaghi and his players. The last time Inter won at Juventus’s home ground was in November 2012. Also, this is the first time since 2008/09, that Inter is undefeated in both their league meetings with the Bianconeri.

Our analysis has shown the key tactical aspects and how they were implemented in such a closely fought contest.