This season’s Serie A title race has become one of the most unpredictable in recent times. With many predicting Inter Milan to repeat last season’s success, their city rivals AC Milan are currently top of the table.

There has been more discussion and attention on which of the Milan clubs are likely to win the league, but it is Napoli who have gone quietly about their business both on and off the field that the media and pundits are overlooking.

The Neapolitans are currently sitting in second place, three points behind Milan and three points ahead of Inter. They have only been outside of the top three places once since the second week of the season and currently hold the best defensive record in Serie A.

In this tactical analysis, we will review the stand-out tactics of Luciano Spalletti’s Napoli reign so far. This analysis will give a greater understanding of Napoli’s tactical approach and examine why they are still in contention for this season’s Scudetto.

As you can see from the graphic below Luciano Spalletti tends to set Napoli up in a 4-2-3-1 formation and after that, they opt for a 4-3-3. 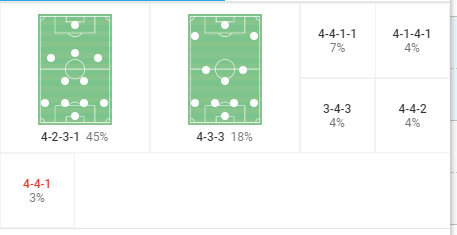 The 4-3-2-1 and 4-3-3 formations give the team more balance in both the attacking and defensive phases.

Under Luciano Spalletti, Napoli always look to control the game by keeping possession of the ball for longer periods. They average 59.2 % possession per match, which is the highest in Serie A. Along with that they have completed more passes than any other team in the league and have the highest pass completion rate at 86.1%.

The players will look to rotate out of the zonal areas their position dictates. They like to stretch the opposition vertically and horizontally as they switch positions.

Using the positional play concept during possession allows Napoli flexibility as they attack.

Napoli will switch between different shapes depending on the area they are looking to attack through. Or it can be due to the defensive shape they are up against. Their attacking shape can transition to a 2-4-4, a 3-2-5 or even a 3-1-2-4 in different matches

You can see here how Napoli are looking to build up in a 3-1-4-2 shape against Roma.

Giovanni Di Lorenzo has moved inside from the right-hand side to make a back three. Mario Rui has pushed high and wide on the left-hand side, with Matteo Politano maintaining the width of the right and Lorenzo Insigne moving into the half-space to make a front two.

This type of movement is a principle of positional play. 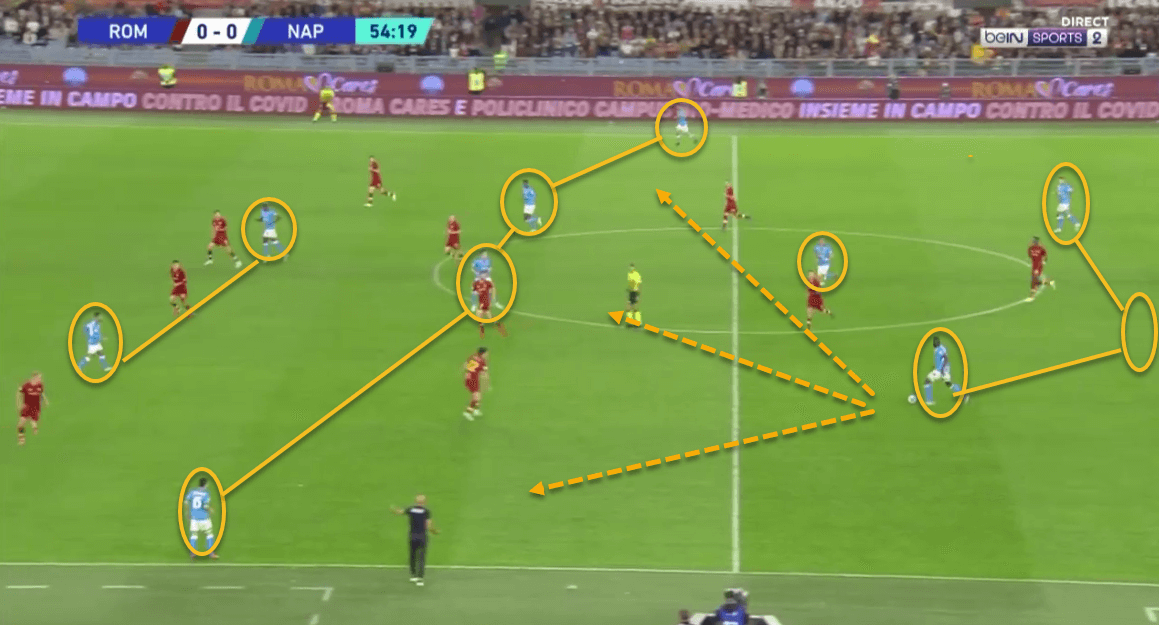 You can see the benefit of changing your shape during possession. In the modern game, most teams will transition to a defensive shape and here Roma has dropped into a 4-4-2 defensive shape.

The wide players being this wide can potentially draw Roma’s full-backs towards the ball and pull them from their defensive line if the play is progressed down the flanks.

The movement and the positioning of the full-backs can determine the shape of Napoli’s attack. Giovanni Di Lorenzo and Mario Rui have been the main fullbacks this season.

They can operate on the outside as well as the inside. It is rare for both fullbacks to be operating in the same positional zone on their side of the pitch at the same time. Especially when in the opponent’s half.

A similar scenario is taking place in the build-up phase here. Mario Rui provides the width on the left and occupies the left-hand channel. Giovanni Di Lorenzo is sitting narrow and has joined the centre backs, making a back three. The difference in this match is that Napoli’s attacking shape is a 3-2-5.

You can see how Lorenzo Insigne has moved into the half-space, which then opens the half-space for Mari Rui down the left-hand channel. 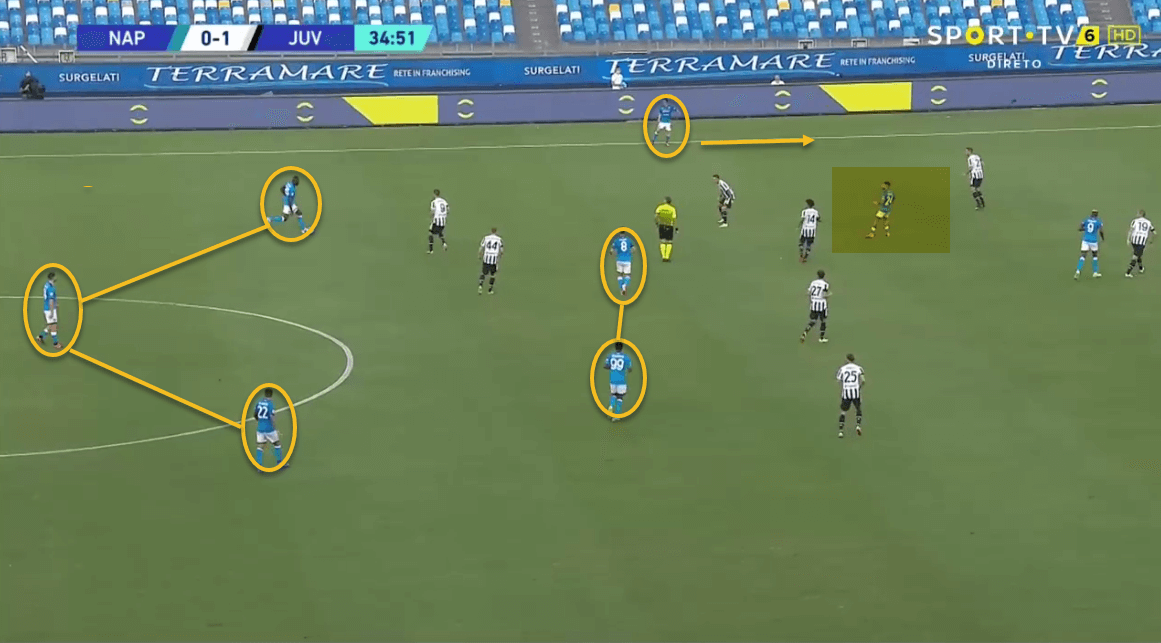 Furthermore, we can see again how the fullbacks follow the same positional tactics. This image reflects apply the method of positional play in the attacking third. The arrows on the image show the movements of the players. 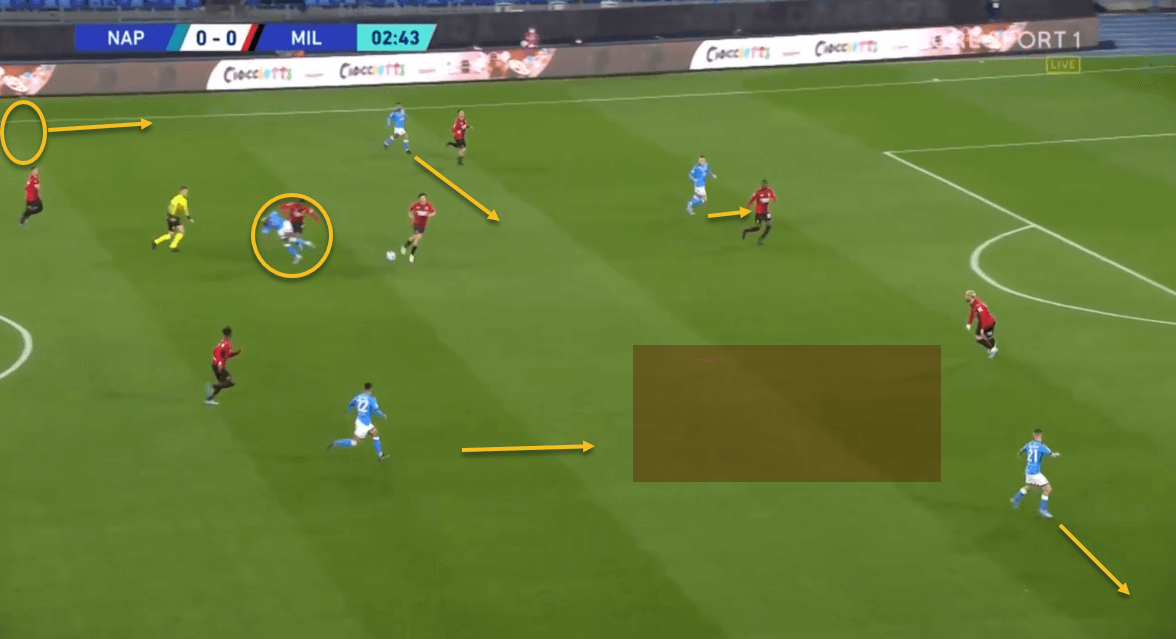 You can see no two players are attacking the same space. I have highlighted the open space area Napoli looks to attack.

Victor Osimhen is the focal point for this passage of play. It is him dropping deep than prompts the positional interchange around him. As Osimhen drops deep to receive a direct ball, Piotr Zielinski makes a vertical run beyond him and Milan’s defensive line. Mario Rui (off-screen) attacks the space vacated by Lorenzo Insigne down the left-hand channel. Insigne then moves into half-space.

Giovanni Di Lorenzo has positioned himself on the inside, attacking the right half-space but from a deeper position. His run will not only occupy Theo Hernandez but create a 2v1 overload on the right as Matteo Politano is moving on the outside to provide width.

A Napoli player will be looking to attack or occupy every zone across the pitch in this passage of play.

The central corridor where Osimhen wins the ball, the right and left channels, both half-spaces, and the space behind the defence.

Now every player cannot receive the next pass, but you can see how the collective fluidity with the movement would disrupt an opponent’s defensive shape.

Attacking between the lines

Napoli look to create and exploit space in between their opponent’s defence and midfield lines. Piotr Zielinski and Fabian Ruiz are crucial to this. Fabian Ruiz likes to drop into spaces behind the midfield and take control of the ball. He likes to dictate the tempo of the game and be a central part of Napoli’s possession

Zielinski likes to break forward with straight runs and attack the space in between the defence and midfield. His energy and his unselfishness when breaking forward prove to be vital when Napoli look to exploit space in the attacking third. He often looks to make third man runs into space to receive the ball.

Given the quality of player they have and the tactical approach they play with, Napoli come against teams who like to play with a low or medium block

Getting players in between the lines offers a greater chance of verticality in your play. Runs and passes into that area enable you to break low and medium defensive blocks. Napoli always look to build toward this as part of Luciano Spalletti’s tactics.

Here you see how Napoli looks to manipulate the space between the opposition defence and midfield. In this image, the red shaded area highlights the areas of space of potential attack. 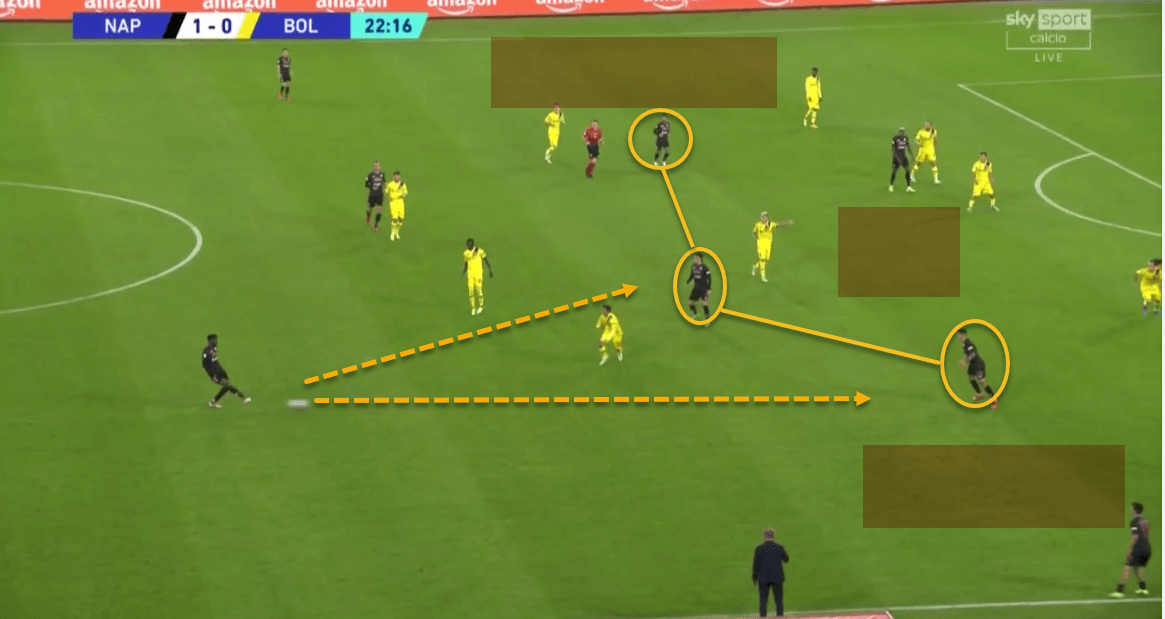 Napoli has multiple options in front of Bologna’s defence. The advantage of putting more than one player in between the lines is that it causes your opponents to sit narrower. Like Bologna has done in both examples. This allowed Napoli to dominate the wide areas.

The single Bologna midfielder who is shielding the space in front of his defence cannot occupy both passing options. Once he attempts to close the play it then leaves Fabian Ruiz free and creates another area of space for Victor Osimhen to drop into. 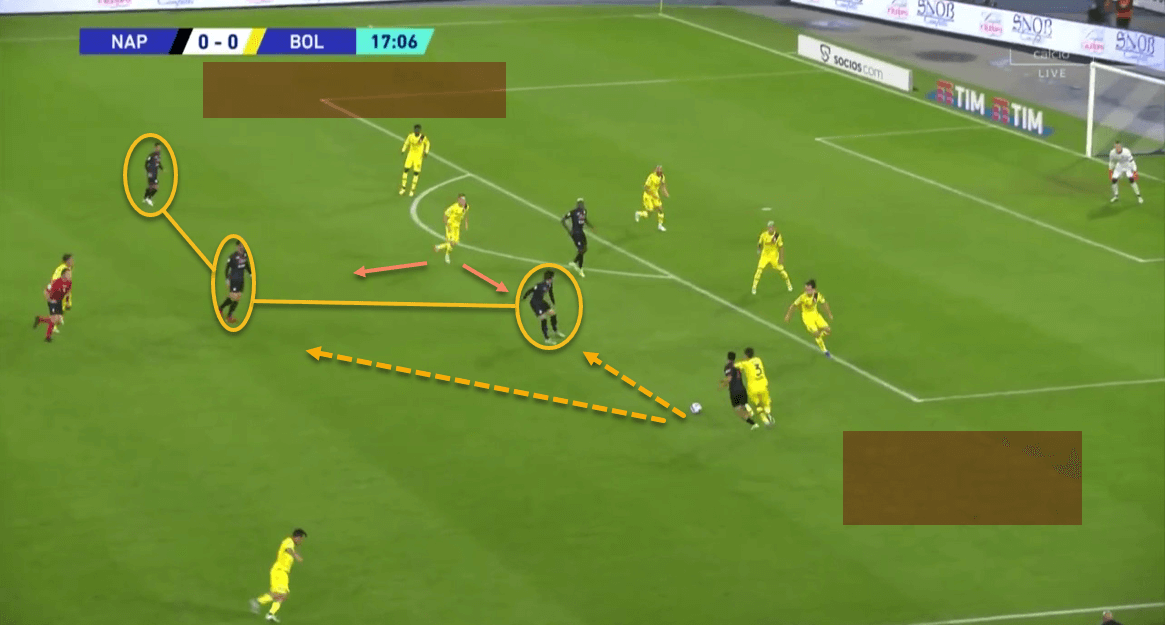 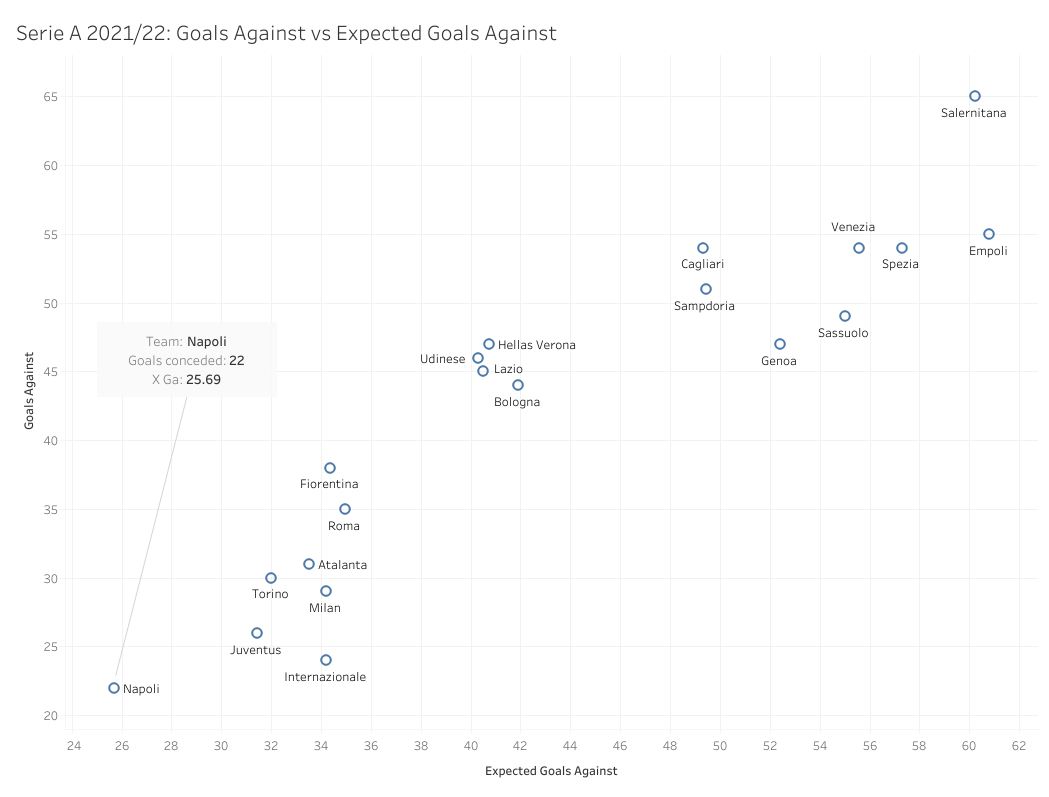 Napoli defends well as a team. When defending in their half they like to stay compact and compress the space centrally. When they lose the ball in the opposition’s half they will press zonally. Meaning each player will aggressively press the ball when it comes into their area.

At the start of the season, Napoli would look to have multiple players pressing the ball winner or carrier. However, their variant of the counter-press tended to become problematic. Their counter-press was too disorganised to be effective. They look less chaotic when they press like the image shown above.

Napoli’s defensive structure is determined by the formation and then the location of the ball. If the opposition plays the ball backwards or they are building from the back, then Napoli will push high up the pitch and look to press man to man, in a 4-3-3 shape. If the opponent beats the press then Napoli will look to sit in a 4-4-2 block when defending. 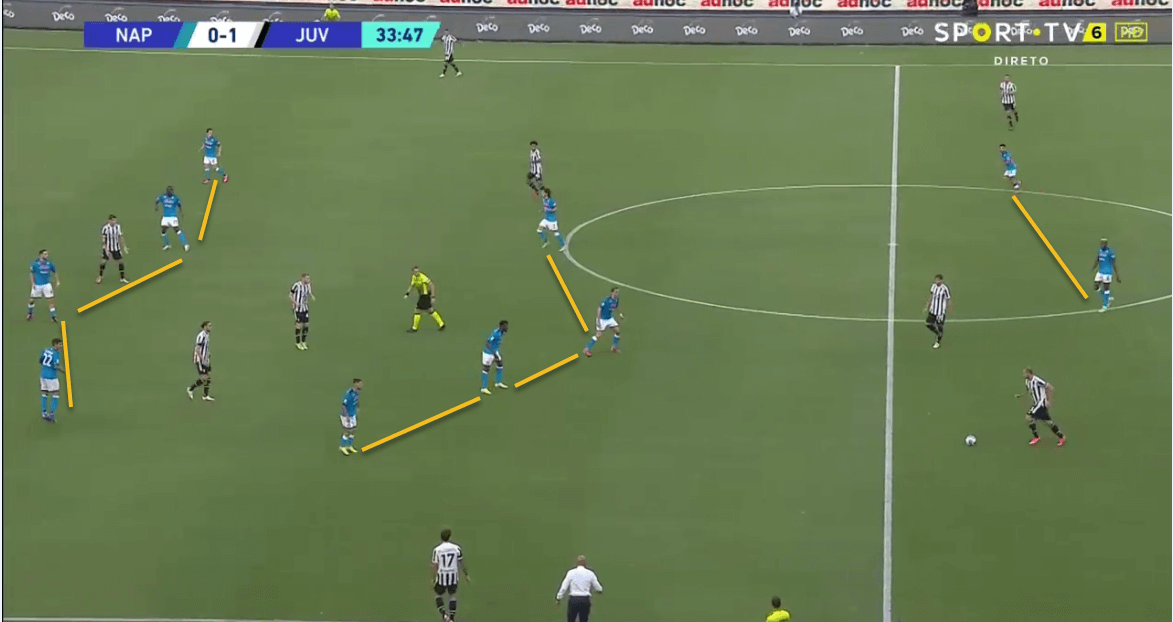 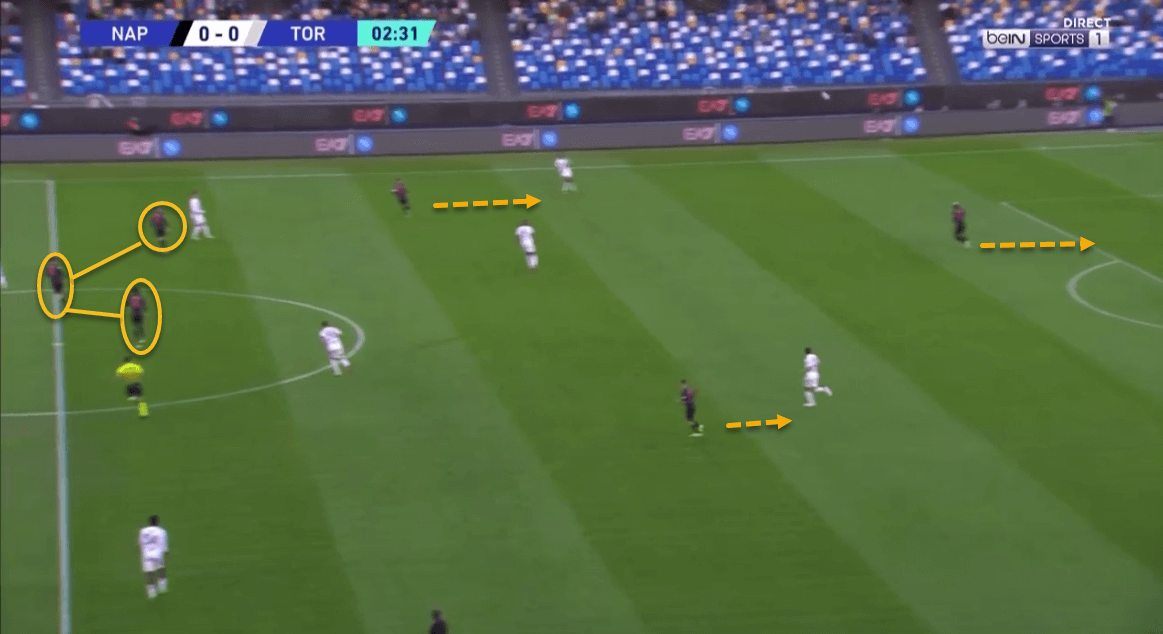 On occasion, their defensive shape will change to a 4-1-4-1, but this depends on the formation they approach the match with or the formation of the opposition.

Overall Napoli’s attacking players are well suited to the type of positional play and possession-based game Luciano Spalletti wants. The individual ability of Insigne, Mertens and Osimhen is enough to win any football match. However, attack wins you games, defence wins you titles.

It’s Napoli’s defensive strength that has maintained their title challenge. They have physicality speed and agility Their ability to defend as a team combined with the individual ability and return to form of Kalidou Koulibaly will be the key to how long they maintain their title challenge

Understandably, people feel Internazionale, and AC Milan is the more favourable prediction for winning the scudetto. When comparing teach of the playing squads the Milan clubs have greater quality in depth.

However, Napoli’s first eleven equals the quality of either of the Milan clubs. Add to that, how well suited they are to Spalletti’s approach. Then they will have a great chance of winning their first Serie A title since 1990.

This analysis has broken down the tactics that Luciano Spalletti has implemented since arriving at the club. The analysis highlights key principles of Spalletti’s attacking approach and how the team’s structure out of possession has made Napoli Italy’s number one defensive team.