Marco Grüll is a 23-year-old left-winger currently playing for Rapid Wien in the Austrian Bundesliga. Grüll is in the middle of having an outstanding season, having notched 14 goals and seven assists in all competitions for Rapid Wien, and as a result, the Austrian international is likely garnering interest from across Europe.

Grüll has a lean build and stands at 6’0” in height. He is right-footed but very capable with his left, and would look two-footed were it not for his use of his right on his set-pieces.

He can play as an orthodox winger, hugging the touchline, and working up and down the left flank, but is versatile enough to offer a threat as an inverted winger – which is reflected in his heat map, shown below. 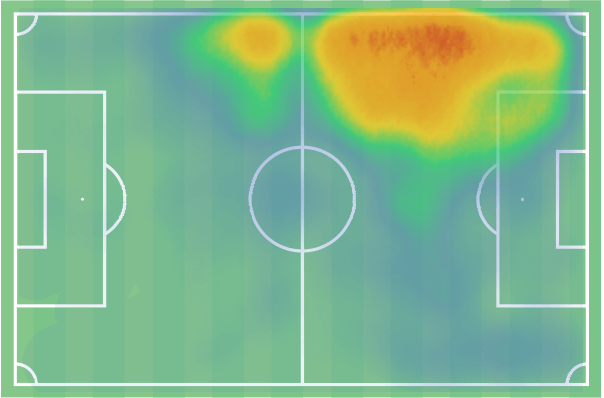 This tactical analysis and scout report will highlight the qualities of the Austrian winger, who has been such a standout this season, whilst providing an analysis on the tactics he best suits.

Grüll frequently shifts inside into the half-space and positions himself in between the lines. In doing so he can draw the opposition full-back forward, or narrow, or adversely simply find space by dropping into these areas. Regardless, he consistently links play and shows an impressive ability to still play forward even with his back to goal and marked tightly.

We can see such an example in the following image as he plays a first time pass around the corner into his centre-forward. Following this pass he shifts even further inside. 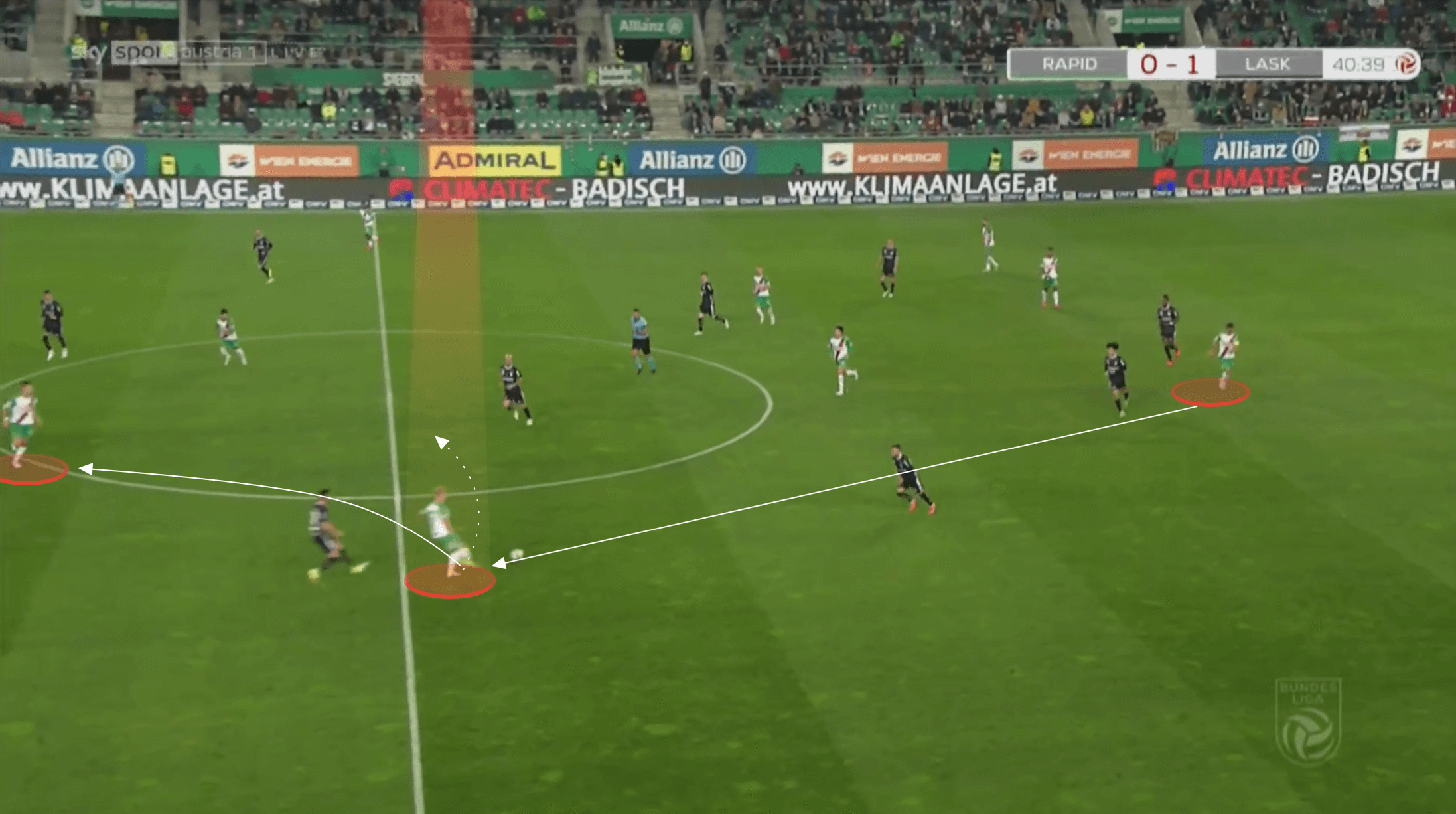 Receiving the pass once more he then threads the through pass in behind with another first-time pass. 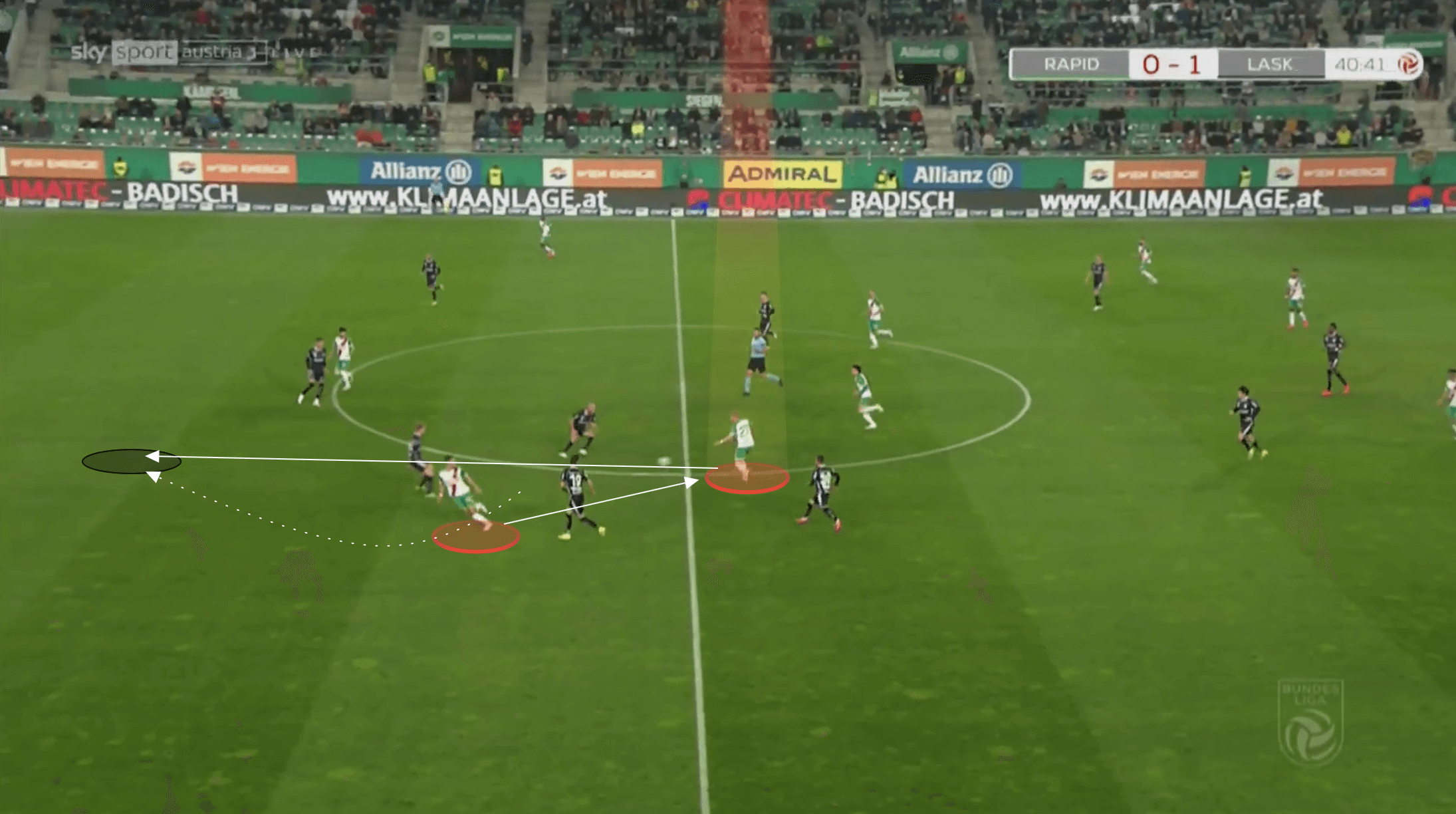 Grüll will move well over from his left-wing position and can frequently evade marking to link play with these one-touch passes. We can see just far how he can move over to do this in the following image, dropping into the central channel before then playing a no look pass to the runner off of his shoulder, as Rapid Wien advance possession with an up, back and through pass combination. 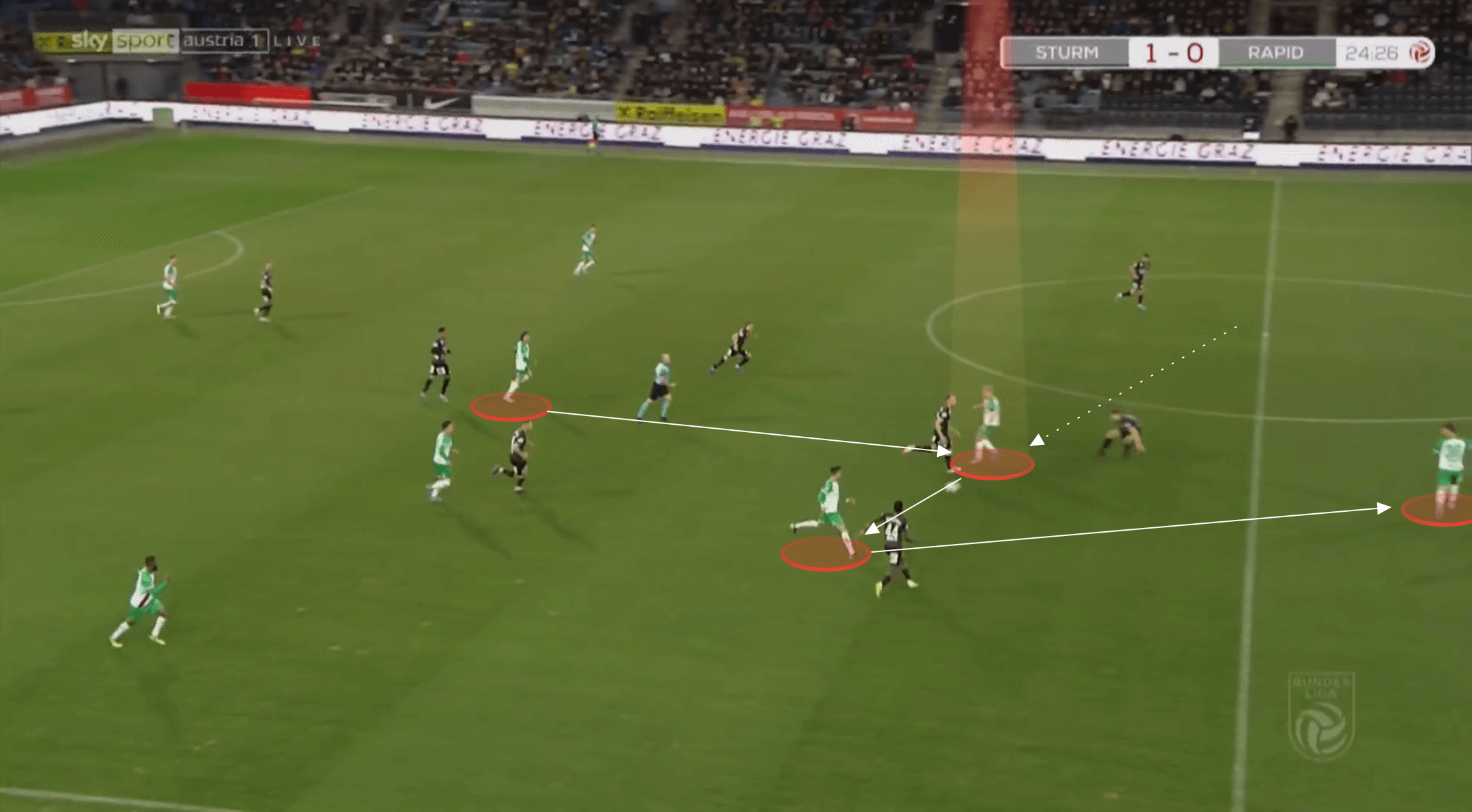 Grüll consistently makes runs in behind, moving off of the shoulder of his marker and either finding space between the opposition midfield and defence, or even fully in behind.

Below we can see such an example of this as he underlaps the player inside from him before latching onto the lofted pass over the top. 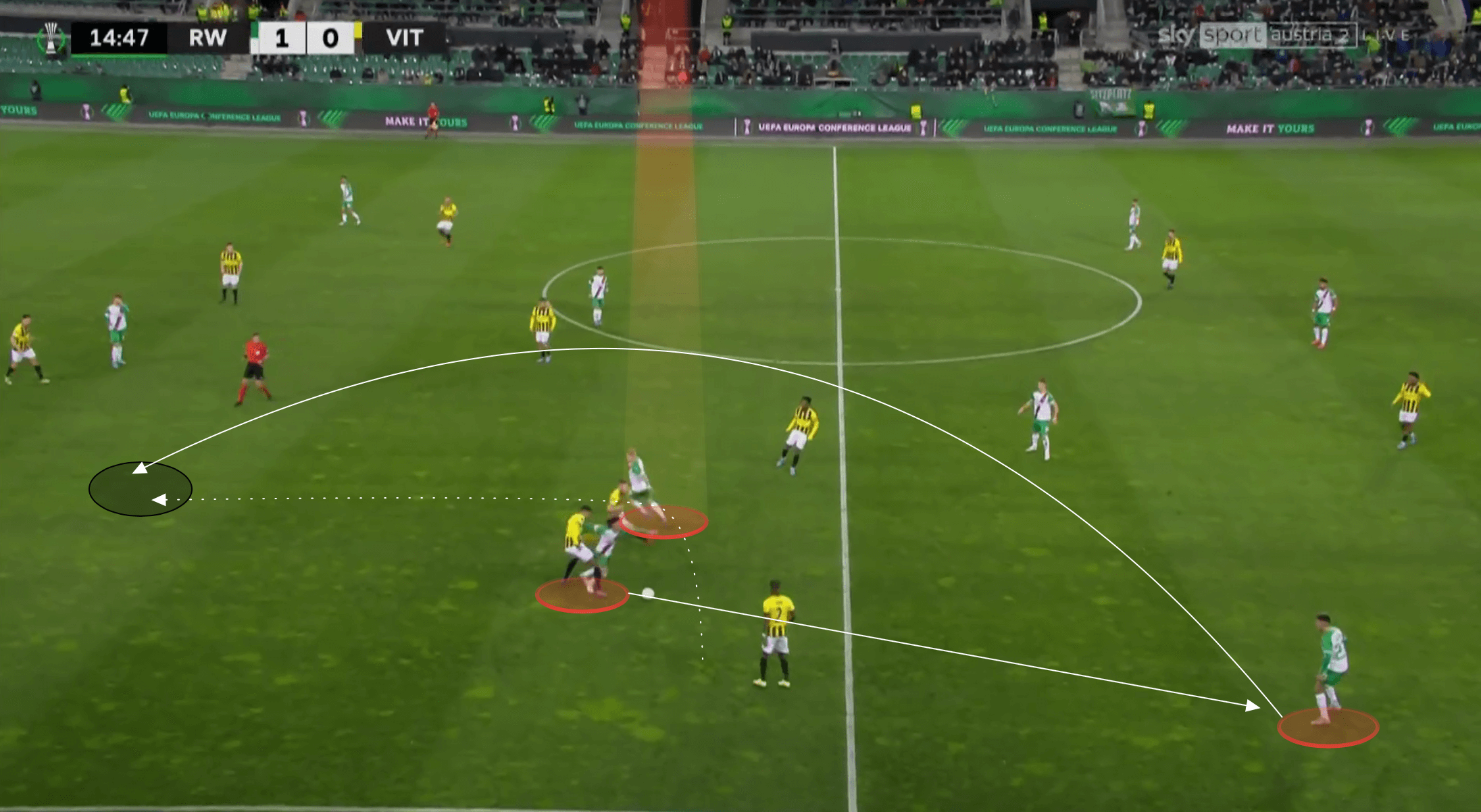 Equally, if positioned further forward, he will continuously look to be released in behind and times these runs particularly well. He checks the runs he makes and will keep shifting between a wide position or a more central position, but either way, his principle when making these runs behind is to change vertical lines on the pitch and evade marking in doing so, or draw a marker out of position.

In the next image, we can see him doing just this as he moves from a central position into the half-space for the Austrian national team. 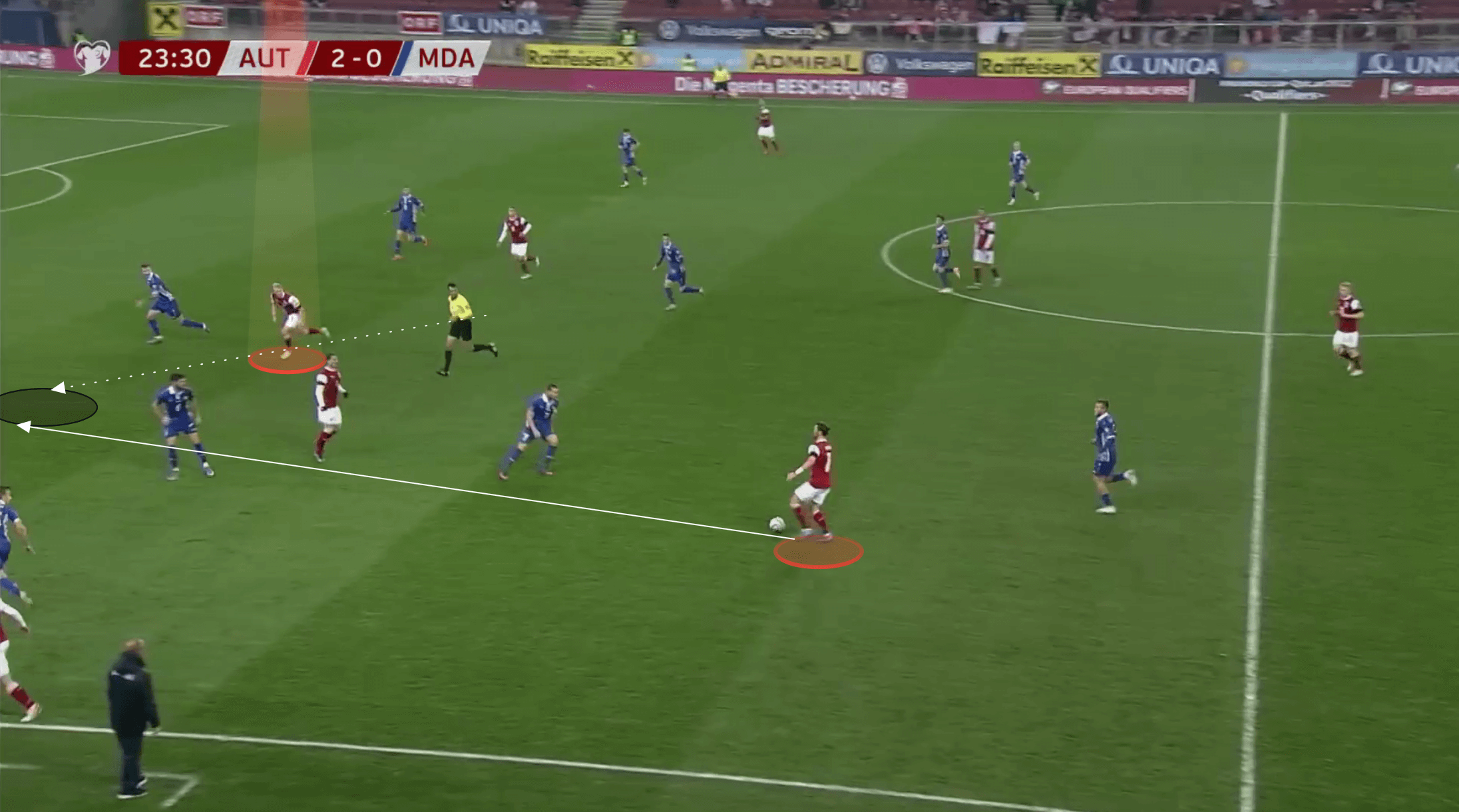 Grüll is highly impressive as a creator and can hurt opposition defences through a variety of approaches. Firstly, he is very capable when standing over a dead ball. Grüll has consistently accurate deliveries from corners and free-kick situations and has created a significant number of chances this season from such opportunities.

However, his ability to create in open play should be equally as respected as his dead ball quality too.

Grüll is dangerous when cutting inside onto his right foot and recognises angles and gaps through which to slide flat through passes into, and has a knack for unlocking defences with these passes.

These can come seemingly out of nowhere, and have the same impact on opposition defensive units who can be caught out by these passes.

The image below provides an example of this type of pass and highlights his excellent awareness of available runners, where he cuts the opposition defence open seeing the highlighted player making the run behind to his left. 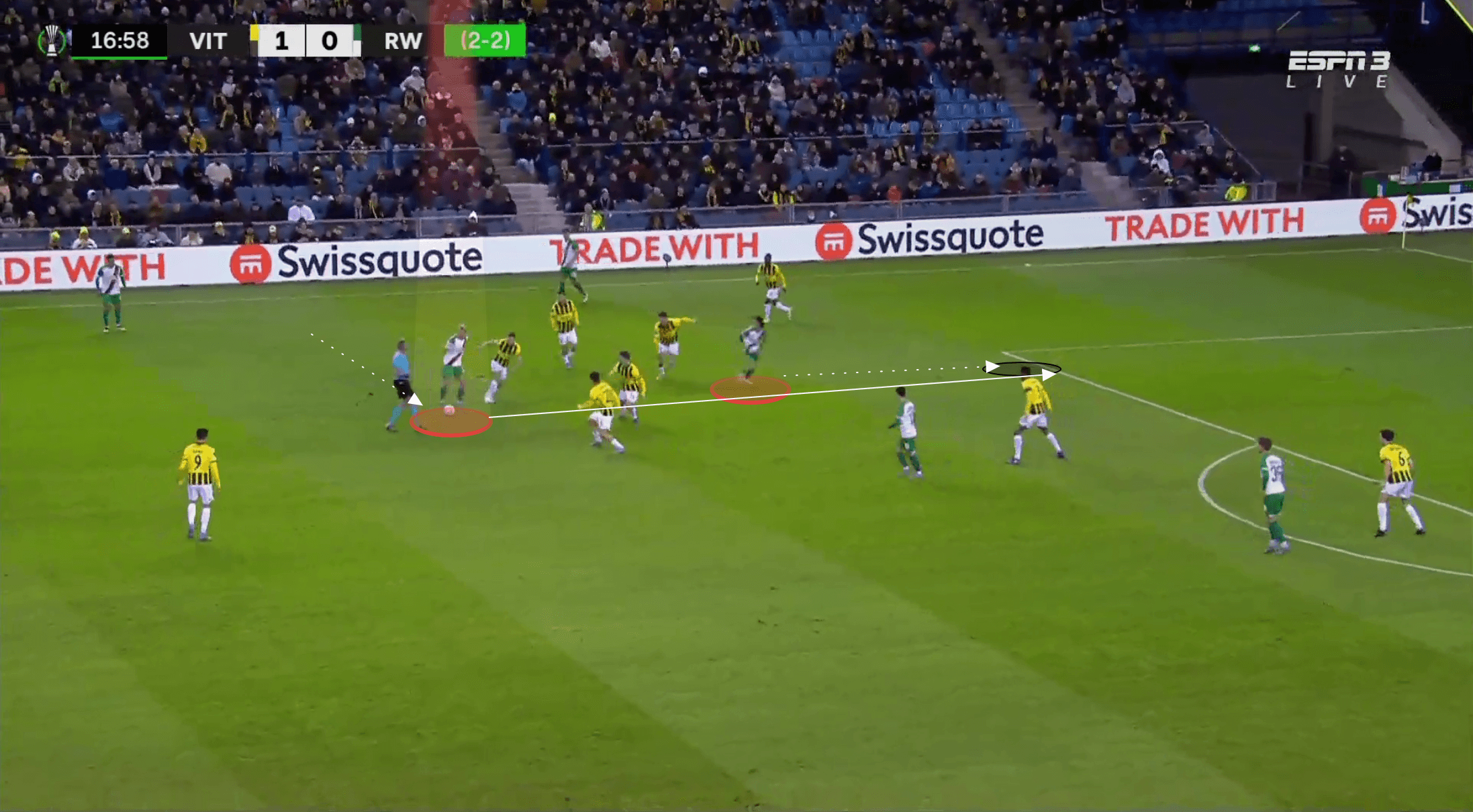 He can produce these passes in congested areas and with the tightest angles. The quality of his weight of pass to pull such passes off can’t be understated either. We can see how impressive this is in the following image, dropping the ball into the small amount of space between the Israel defence and goalkeeper. 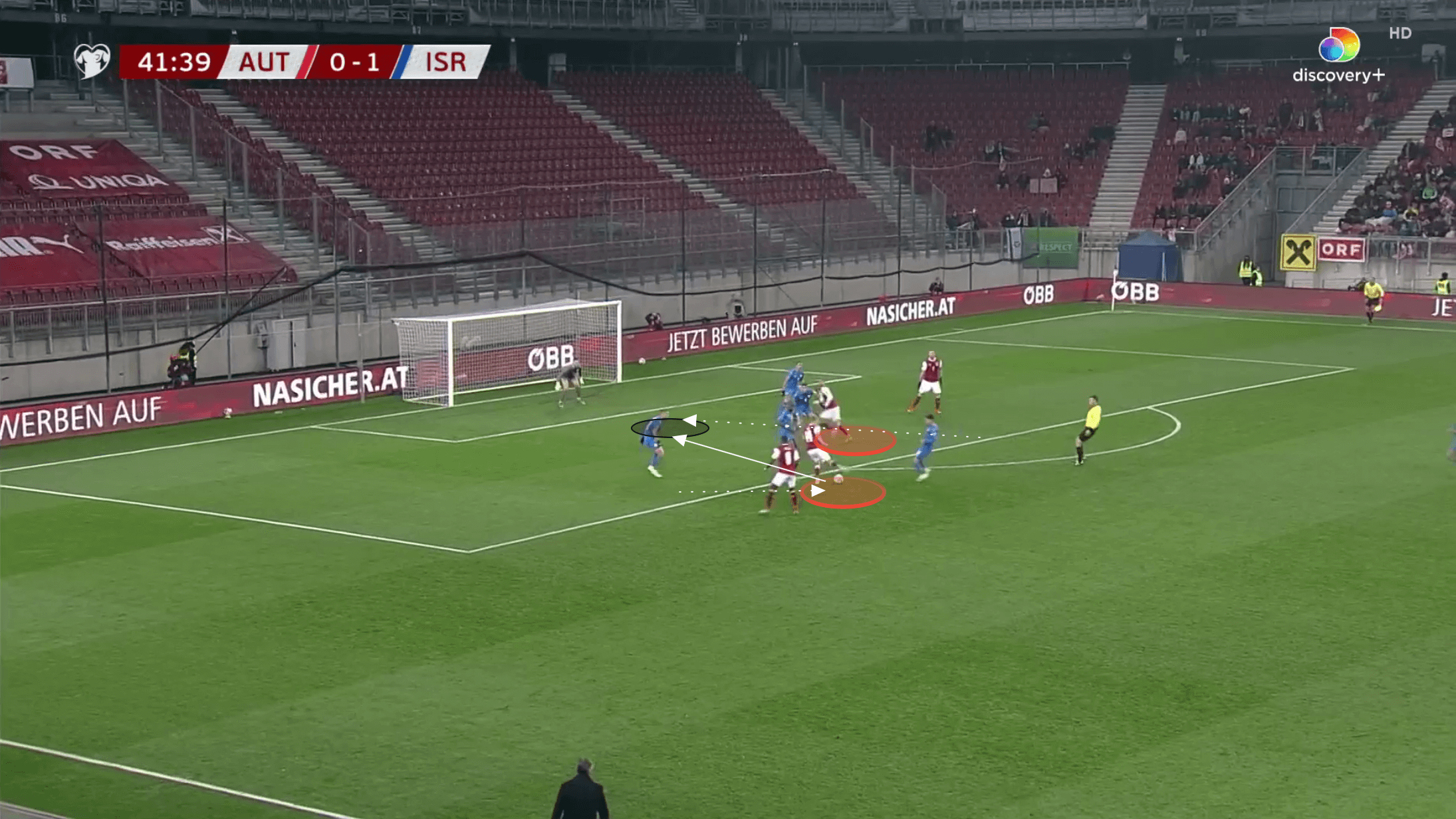 He doesn’t make an overly high volume of crosses per 90, but his 2.29 crosses per 90 isn’t an insignificant amount by any means. His 34.8% completion on these crosses is very strong however.

Grüll has the benefit of being able to cross with either foot, and this makes him unpredictable to defend against when he can exit either side of the defender and quickly whip a cross in following this.

He has an impressive ability to consistently access dangerous areas, drilling the ball in at a lower trajectory and allowing his teammates to attack the spaces with late runs, rather than lofting the ball into an aerial battle. 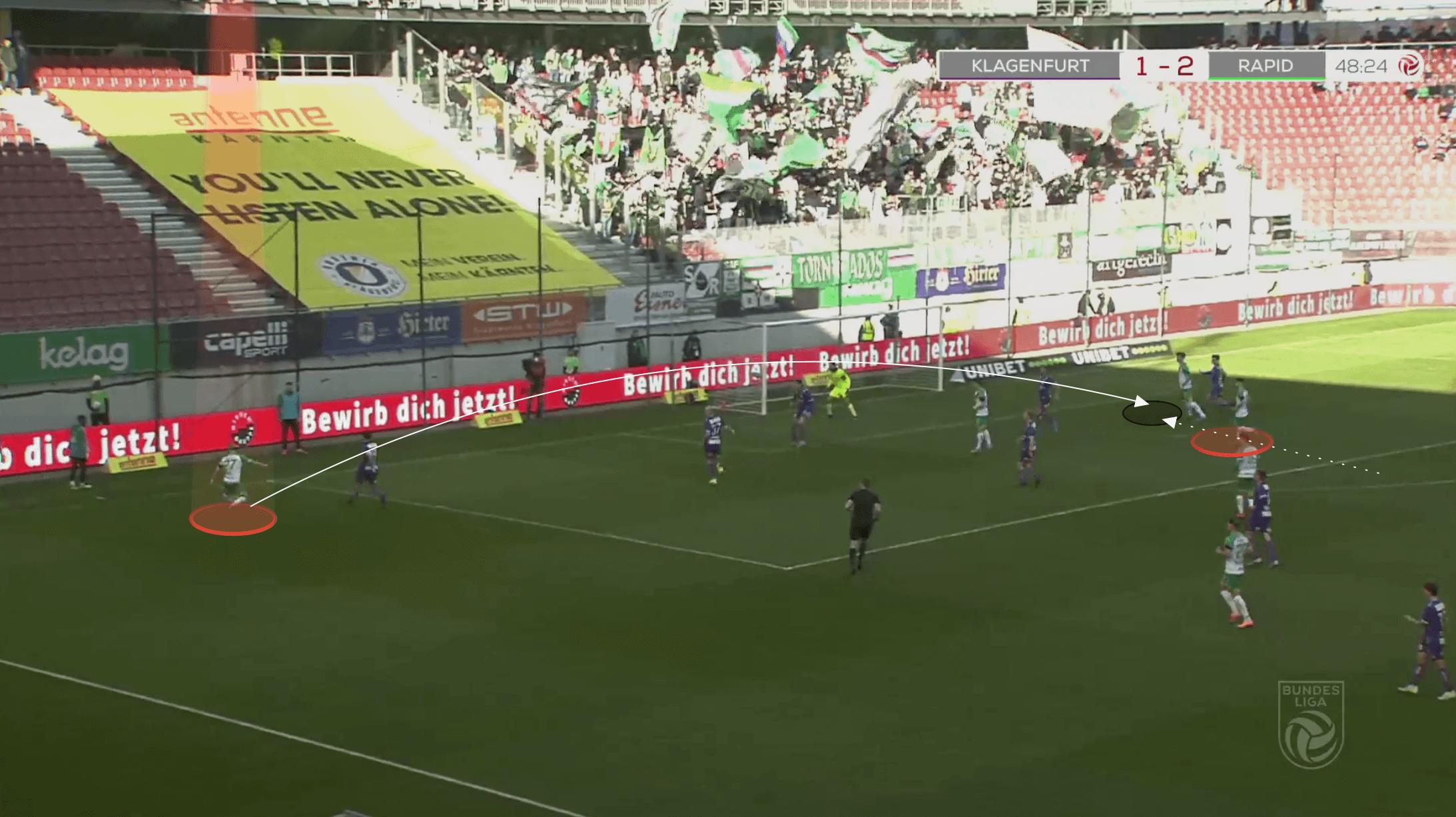 We can see him doing this in the previous image with his left, whereas below he cuts inside back onto his right, putting the defender on the ground in doing so, before then again whipping the ball across goal for his open teammate to run onto and score from. 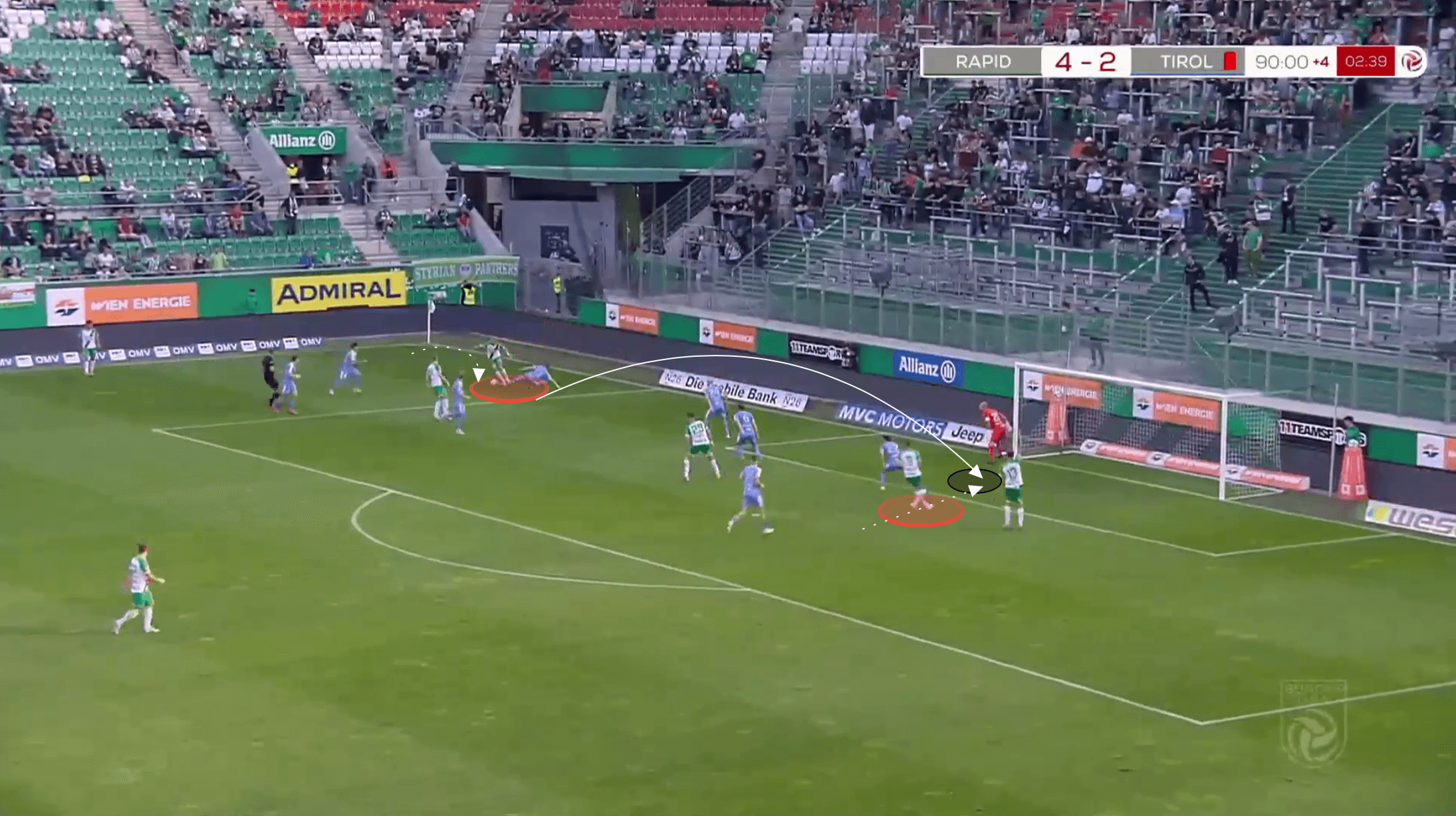 He can cross from these deeper areas with some frequency, but also has the ability to get the ball to the byline inside the area and cut it back across goal, drill it across the face of goal from a position close to the opposition goal.

He shows outstanding awareness to drive the ball at a sharp pace inwards from an angle where others may have chosen to strike on goal – instead finding his teammate inside. 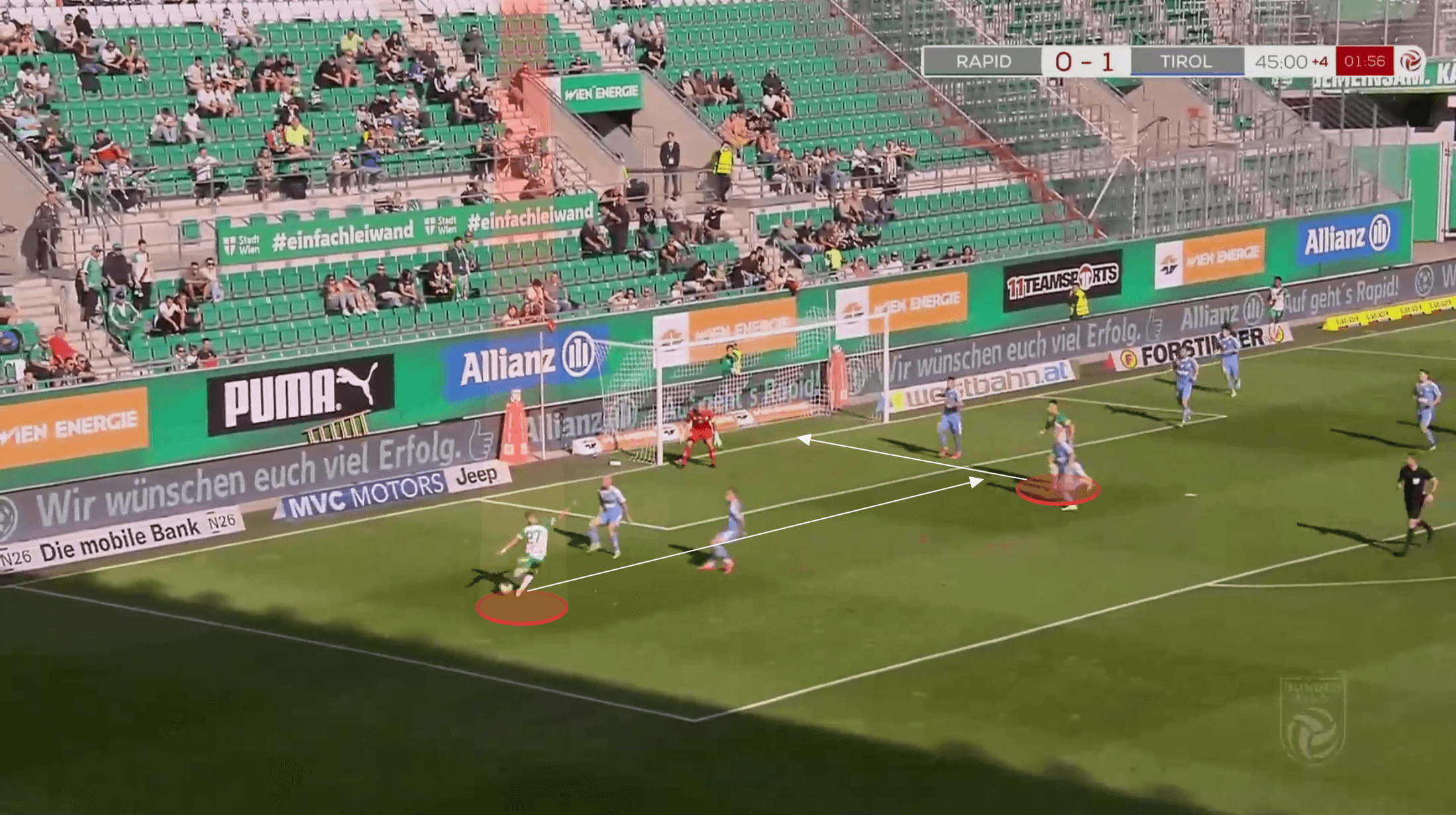 Grüll is also an outstanding ball-carrier and not only acts as an excellent ball progressor when on the ball, but this dribbling is valuable in moments of attacking transition. This season he has averaged 6.12 dribbles per 90 in all competitions, completing 46.2% of these.

If found early, Grüll will be very aggressive and take big touches in front of him, using his acceleration to catch defences cold in these moments.

We can see just how aggressive these touches can be in the following image, breaking past the defender with it. 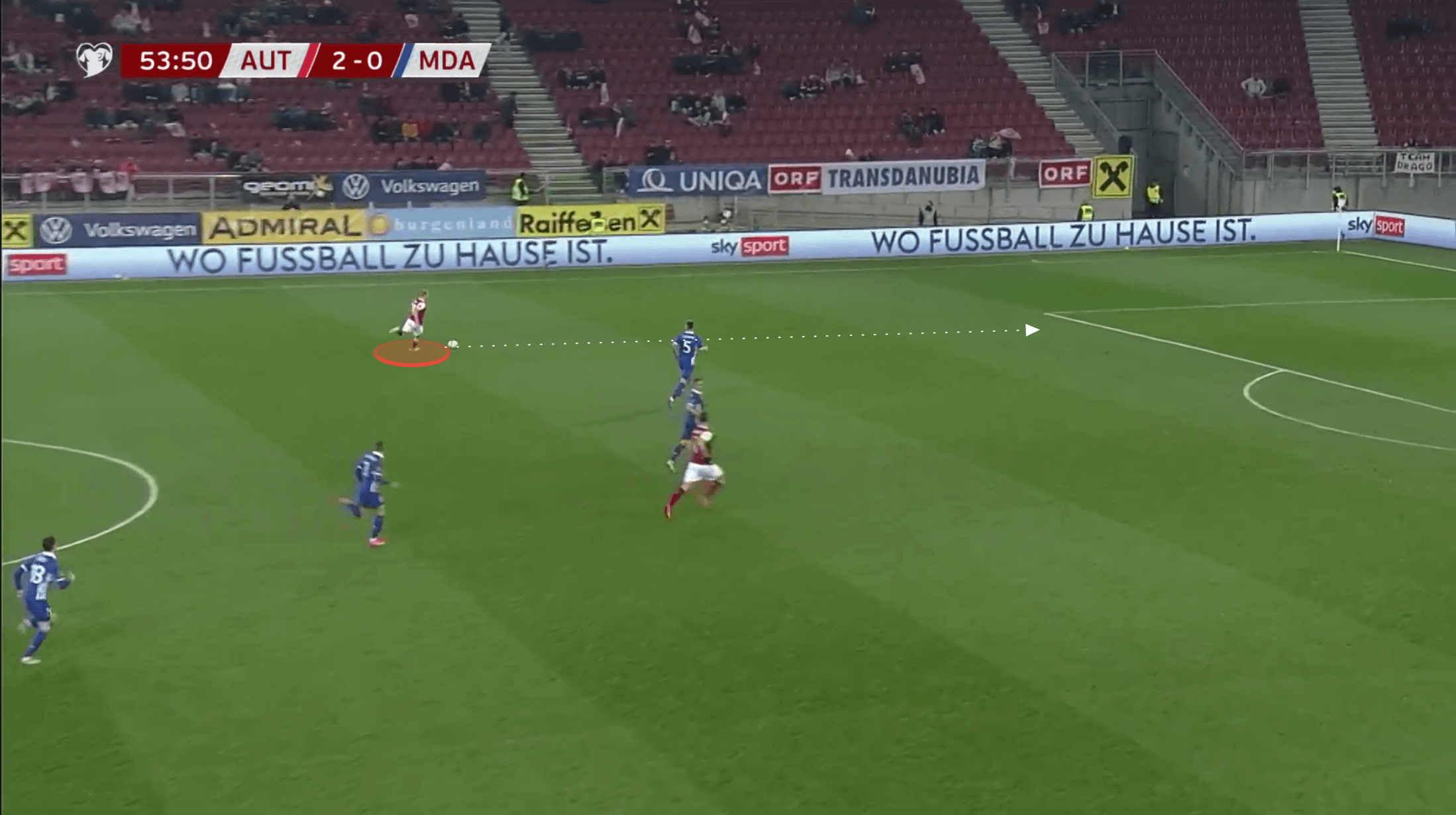 And moments later, taking his second touch, Grüll is able to draw the lunging tackle from the opposition defender, winning the penalty. 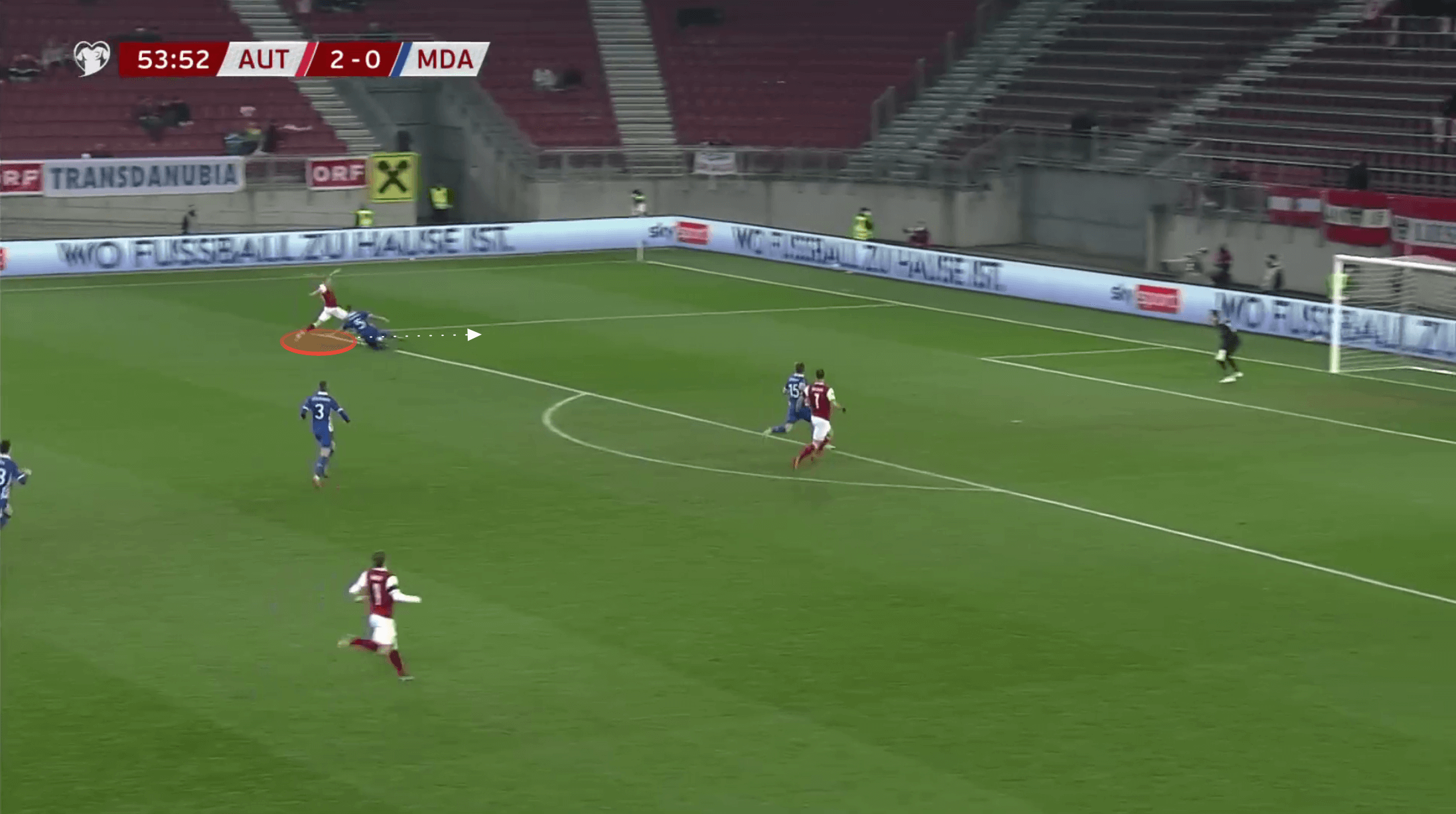 Any winger scoring 14 goals in a season is an impressive feat, and Grüll has been able to consistently score at a good rate this season with a simple, but effective approach to getting into these scoring positions.

Below we can see him latching onto a long ball over the top, getting enough space to receive this pass due to making a late run from the left side of the pitch into this central area and behind the opposition defence. 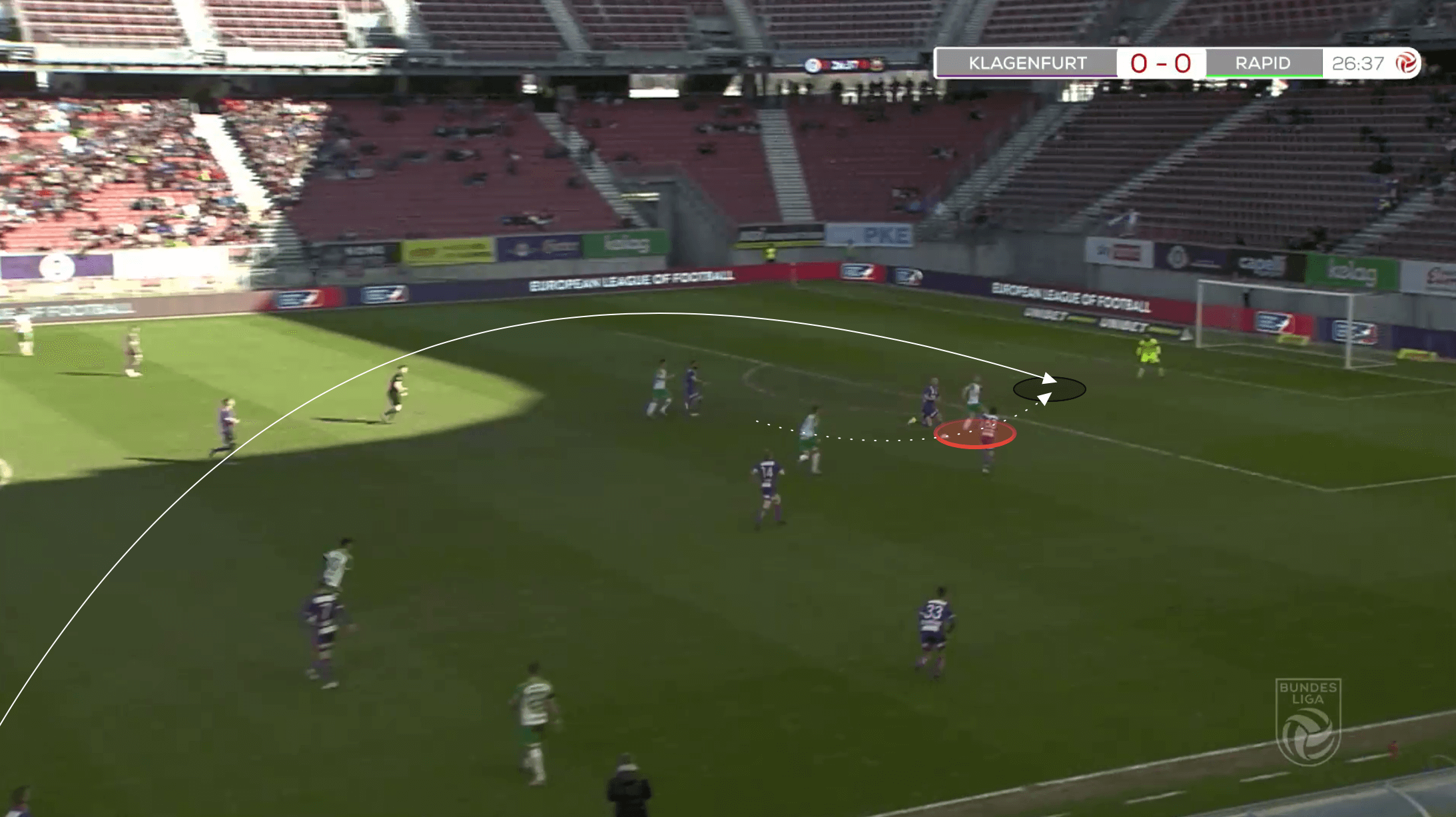 Yet in these moments he shows outstanding composure. He can take shots on quickly, but there are times where he may be pressured and yet will take an extra touch, steadying himself and picking his spot before finishing. We can see him doing this in this very chance shown from the previous image, where now below he calms himself with a first touch, despite the proximity of the keeper and the presence around him, before placing the shot past the keeper into the vacant side of the goal. 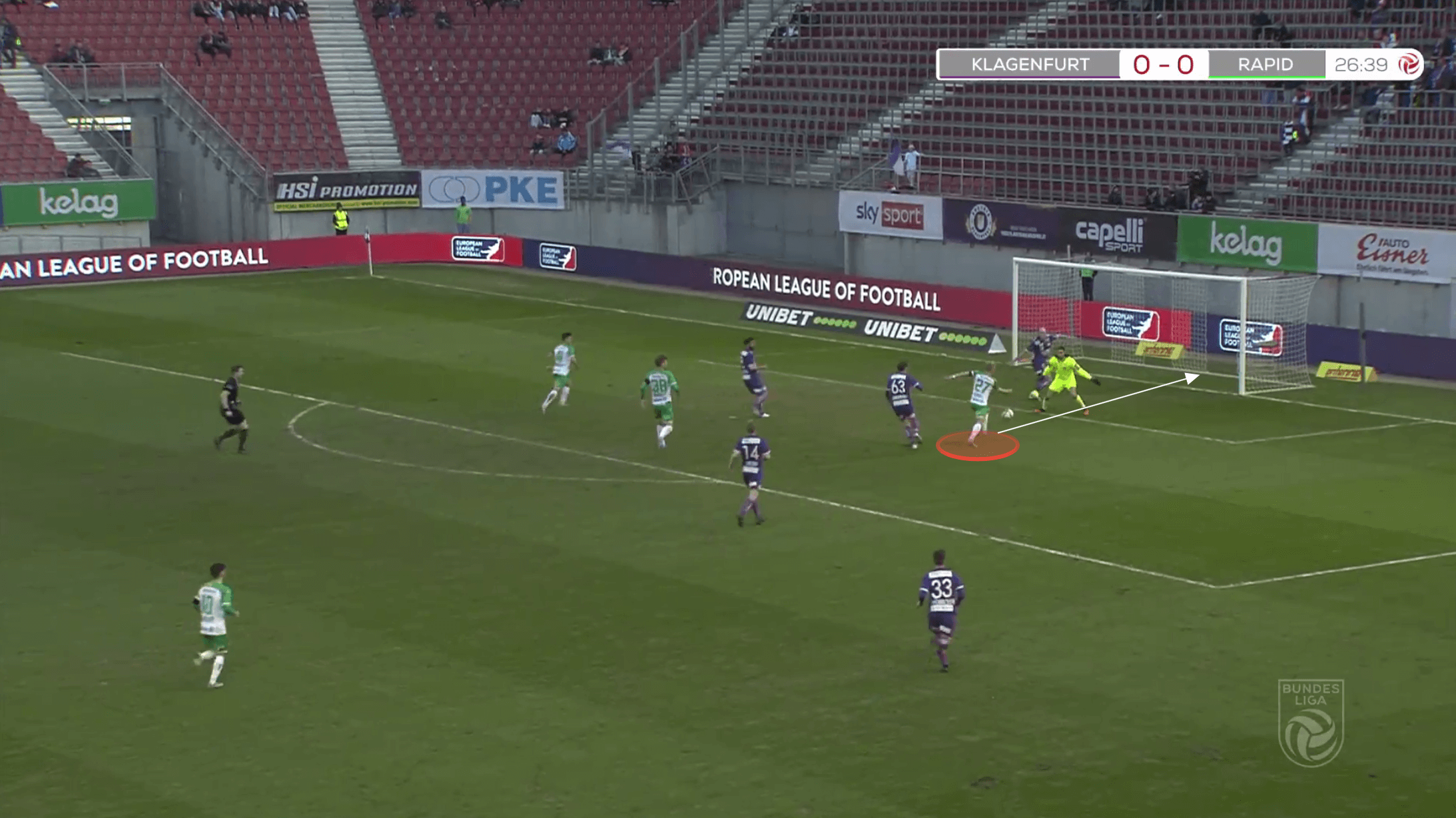 He regularly picks out corners with his shots and does have a penchant for picking out the front post, often recognising quickly when the goalkeeper has left too much space in this area of their goal.

He can use his dribbling to create chances for himself as well as others, and below we can see him first cutting inside after beating his man, and taking on the shot, firing past the defender stepping out to press him and accessing the front post. 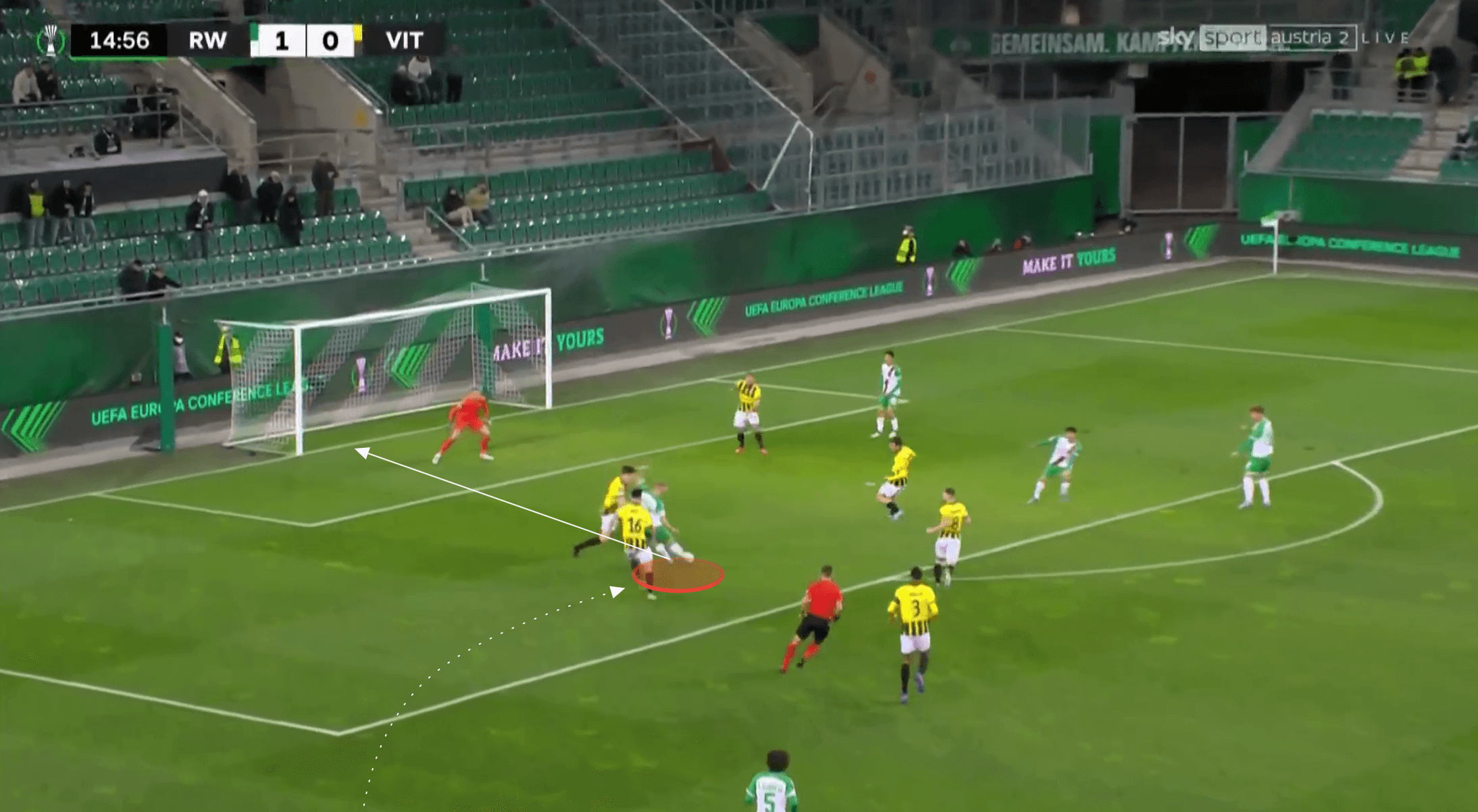 Once again, his quality from set pieces needs to be highlighted once more. Not only does he create from these but he has been a regular goal threat from these situations as well this season. He can get the ball up and down from close range, and yet has the ability to strike the ball with more power from further out, whilst still being able to curve the ball away from the keeper.

His free-kick goal against LASK Linz earlier this season was a true highlight for the winger, showing phenomenal ability to curve the ball around the wall and yet generate enough power to beat the keeper, picking out the top corner of the LASK Linz goal. 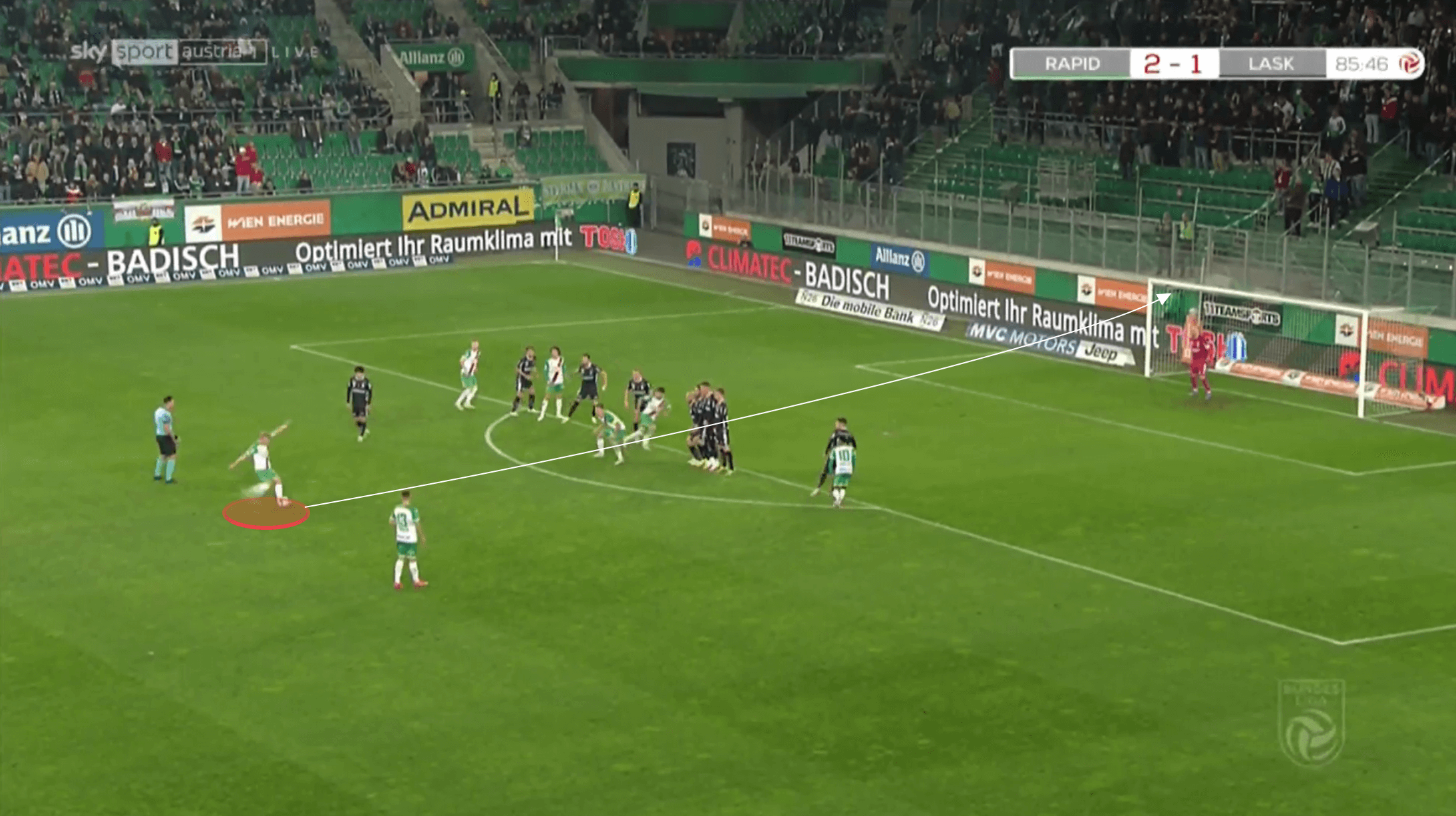 At 23, and with such a standout season, Grüll is likely to have no shortage of interest from European sides this season. Given his quality performances in Europe this season as well he will have convinced some doubters that perhaps these performances might not translate from the Austrian Bundesliga, but you can bet there will be German Bundesliga teams keeping a close eye on him given the ease of transition between those two leagues, whilst Premier League and Serie A teams may well begin to circle too.